Bootsy Collins And Jim Vitti In Conversation At The Grammy Museum - Funky!


Oh, Bootsy Baby! My brother, Paul, and I got the chance to go listen to one of the greatest dudes on this (and any) planet the other night at The Grammy Museum when Bootsy Collins was there to talk about the funk with his recording engineer and friend, Jim Vitti, and Grammy Museum director, Scott Goldman. I have to be honest and admit that I really wasn't at all in the mood to go to this on this particular evening, because my dear Mom had just been admitted to the hospital and was awaiting surgery, and I was freaking out about it. But we figured it doesn't do any good to pace around worrying, so off we went to try to not freak out. It was the right choice, and one that has made me feel better about it all ever since. 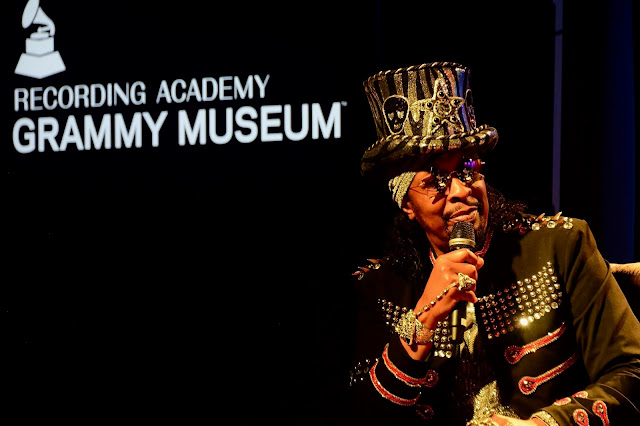 Goldman introduced the legends by saying, "Our guests tonight have been bringing the funk for decades," and that's a fact. Collins has been on the front lines of funk (inducted into the Rock Hall of Fame in 1997!), leading the way since his time in James Brown's band, on to the Parliament Funkadelic, and on to his own solo career with Bootsy's Rubber Band until right now.

The night opened with a funky video about Collins, narrated by Iggy Pop, that showed just exactly how this inventor of "Space Bass" came into being. Producer Nile Rodgers was there getting the claps started for his friend Collins, who came out in a sparkly top hat and sparkly everything, really, with Jim Vitti, who bears a close resemblance to Mr. Whipple these days, the guy from the Charmin commercials. No one would know that he has engineered and produced some of the funkiest albums of all time. But he did. 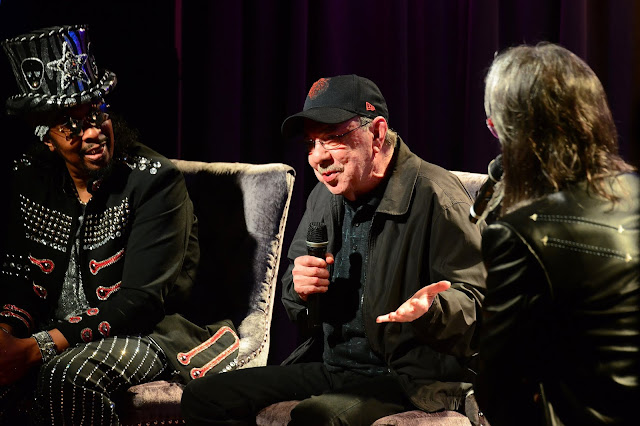 Their story starts in Detroit, where Vitti snagged himself a gig at United Sound Systems after coming home from 'Nam. He always loved music and technology, so he began learning and training his ear from the back end, by listening to master tapes. He worked with Bob Seeger, which sent him on his way. Meanwhile, Collins got booted from James Brown's band, saying, "We got sent home for being a little crazy ... he fired us for getting HIM high!" to which everyone gathered there to listen cracked up at. 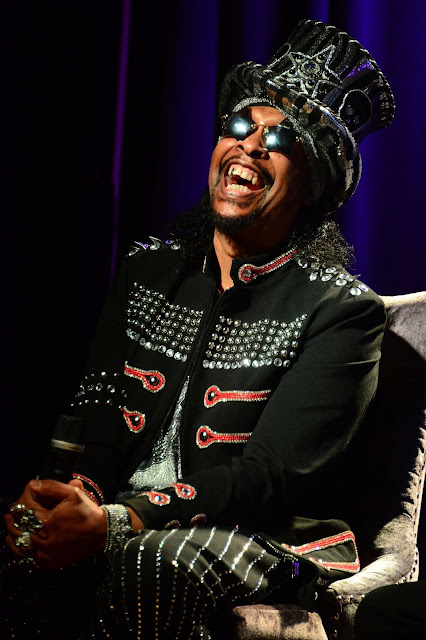 Collins came to Detroit to be in the band for The Spinners, but knew that wasn't ever going to happen - not a good fit. But THEN he heard about George Clinton and thought, "What is this Funkadelic? I need to meet this mug!" He went to Clinton's house, and knocked on the door of what he said was like The Addams Family house, thinking, "This is the kind of scary I like - 'cause I was tripping too!" There were black lights on and incense burning in the dark, and he saw Clinton in a white sheet in the corner of the room like a ghost, "With chicken feet on like Foghorn, Leghorn!" That meeting let Collins know he was in the right place, saying, "That's who I want to be working with, he's out of his mind!" Soon enough they did begin working together, and that's when he met Vitti. 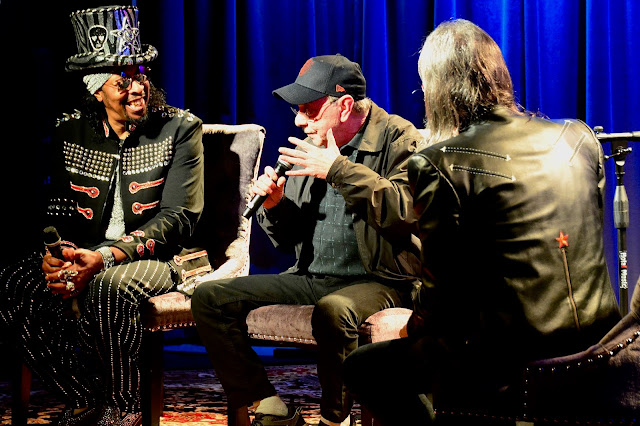 The Funkadelic would "steal gigs", meaning they'd ask to sit in with some band, and then just totally take over the gig. The energy the band created was unparalleled, and Goldman asked Vitti how they managed to capture that energy on recordings. Vitti answered that he had drawn the shortest straw, as no one else wanted to work with Clinton because he was crazy, but "I just fell in love with the guys!" 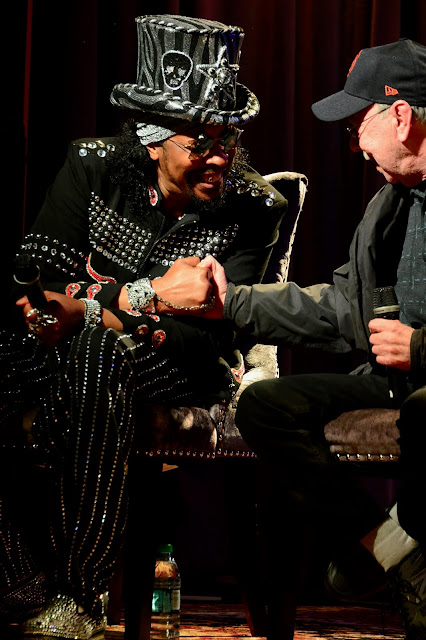 He dedicated himself to it, working for hours and hours on just the drum sound. They gave an example of that, playing the P-Funk track, "Funkentelechy" that had the whole room bobbing their heads along, and sharing a soul brother handshake at its end, while Collins' wonderful wife, Patti, danced along in her chair. You couldn't help it. 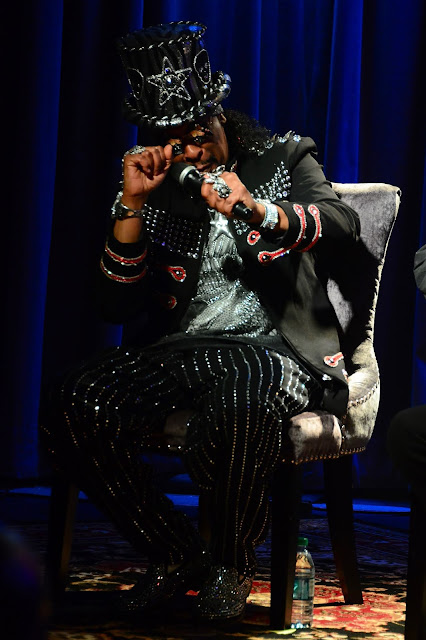 "This does not sound dated at all," commented Goldman correctly. It's as fresh as the day they recorded it in 1977, and kids today would totally think they just discovered the latest thing upon first listen. Collins' brother, Catfish, was also in the bands, and Vitti's voice caught talking about all the fun they had had, and how much he misses Catfish Collins, who passed away in 2010. 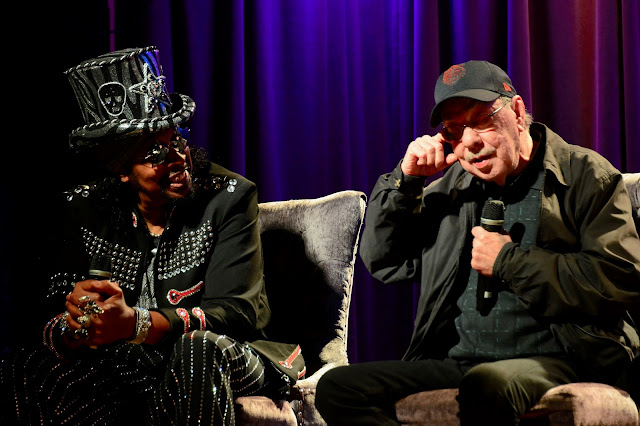 Looking back on their times together, Vitti said, "We were working at the speed of light, it was non-stop. It was like herding cats to get them on the same page, and it was always chaotic." Collins had been giggling while listening, and to this commented, "ALWAYS chaotic." - and you could tell that's just how he liked it. 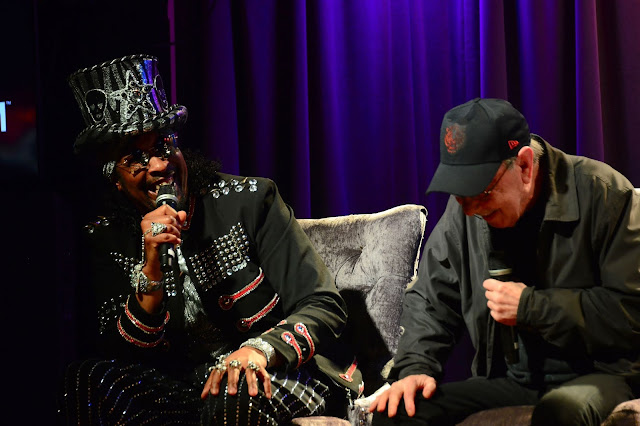 "Bootzilla" was played next, and the two old friends shook hands, nodded and mouthed along with it. "I love watching you listen to this!", said Goldman, adding, "That bass is SICK!" - and again, he was not wrong. A trust had grown between Vitti and the band, and this song showed that it could be done. "They knew I had their best interests at heart. I love people. I love musicians," explained Vitti to much applause. "We were the craziest," said Collins, and Vitti perhaps felt the need to add, "I was the only straight one in the room!" They shared the story of how on "Knee Deep" Vitti wanted Collins to play the drums, for the 15 minute rock opera that he was sure he'd have to go back and fix, but Collins performed perfectly, shouting, "The Funk will always prevail!" 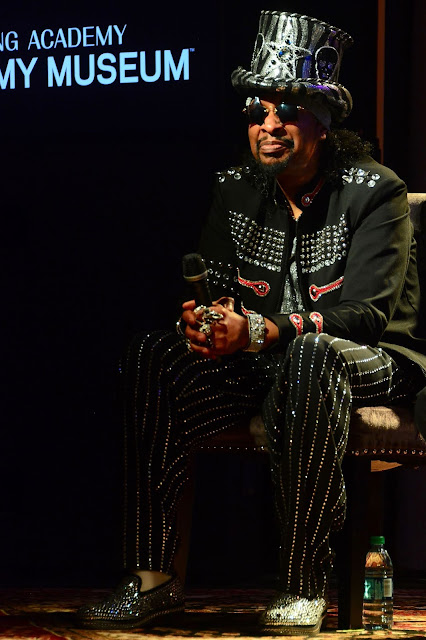 They spoke about the hand claps on P-Funk albums, and said that they created a monster, because it was on everything after that - to the point that people would call United Sound wanting to rent the "Hand clap machine" because they were always so perfect - but they were real. They told of how Collins was always experimenting with pedals and guitar things, and things like plugging his bass in through a Mu-Tron for "Chocolate City" - giving it that Funkadelic sound. "I was evolving into a monster, and monsters turn on you. Look at that Frankenstein mug!" ... everything that comes out of Collins' mouth makes you smile - almost as much as his music. 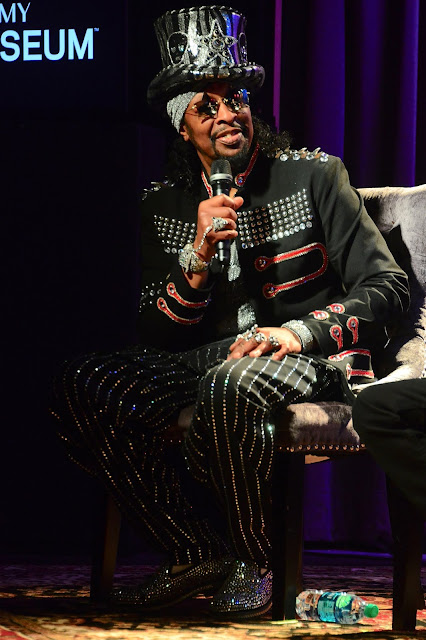 "Atomic Dog" was played next and got the whole room rocking. We learned that this classic had the bass and drum tracks backward, as they simply flipped the tape over and played it backwards when they recorded. Whatever they did was awesome, because every single person in there was dancing in their seats. (Note: I played it for my six year old friend the next day and he thought it was THE coolest thing ever! Timeless.) Goldman next opened it up for questions, and one person asked how Collins came to work with Buckethead. Collins answered that Buckethead had sent him a tape of himself sitting on a bed and playing with a bucket on his head, back in the '90's. He freaked Collins out just enough to say, "I want to work with HIM!" - and so they did. There were a couple technical questions from the heads that go deep at these events, and then Goldman asked the two friends what they had learned from their experiences together. Vitti answered, "I always say I've never worked a day in my life. The studio is where I wanted to be. Find something that you really love, get passionate about it, and you'll never work!" 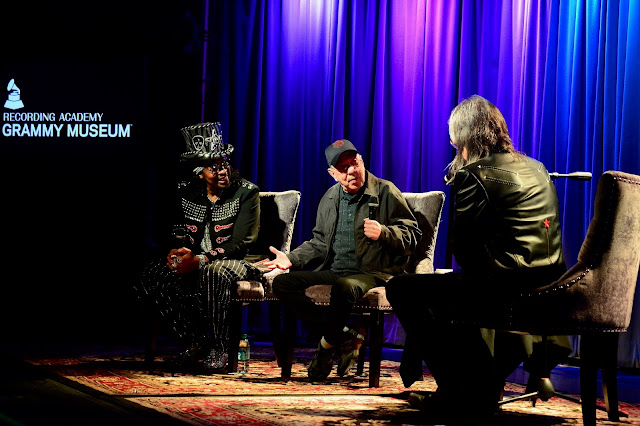 The friendship between these gentlemen is as touching as it is unlikely from the covers of their individual books, especially back in the day, but you can tell it is real and lasting. It was surprising to hear that they had actually NOT seen each other for all of these years since those recording days, until getting back in touch about 4 months ago. They seem so easy and comfortable with each other that you assumed they'd been hanging out all of these years, but nope. They're going to do more music together now, and Collins summarized it all by saying, "It's beautiful when you find that person that helped you long ago, and nobody's tripping. We love each other." It really was beautiful to behold. 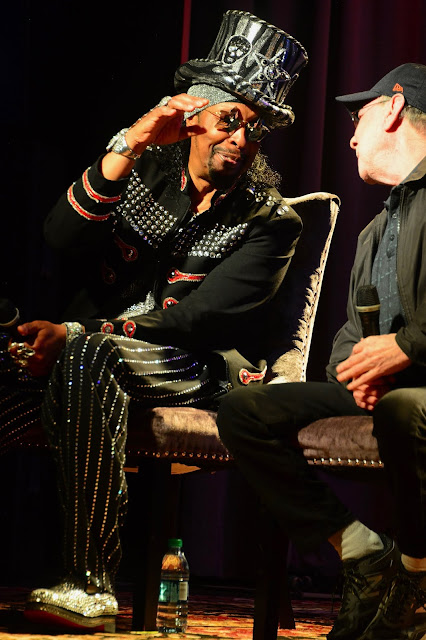 There was an after-party held at The Prank a few blocks away, but no one thought Collins and Vitti would make it there, as the line to meet and greet after the event stretched all the way around the current Backstreet Boys exhibit, as everyone wanted to say hi and get a photo with the absolute hero that Collins is. Finally, we looked up to see Bootsy and Patti Collins making their way upstairs, along with Mr. Vitti and his wife. I got to talking with Patti and it came up that we almost didn't come because we were concerned about our Mom in the hospital, and this angel of a woman took me by the shoulders and looked me in the eyes, saying, "Your mother is surrounded by angels. She is going to be fine." It moved me so much that she would even care, and then we were joined by Bootsy and my brother, and I felt a calm come over me, powered by the faith and love exuded by these beautiful people. 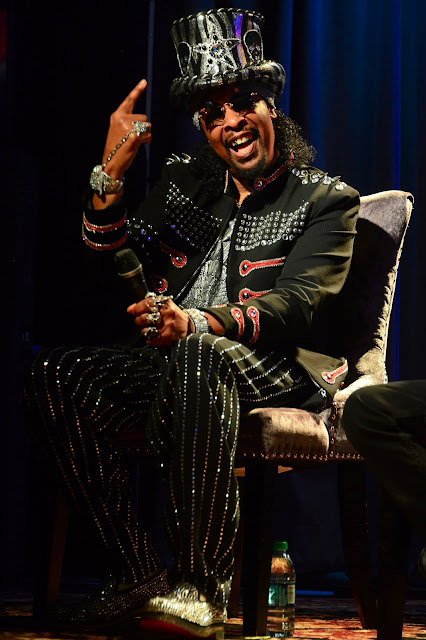 I'll never forget Collins telling me the last time I saw him at an event that he always wore star shaped sunglasses, because he wanted the young kids he meets to see themselves reflected as stars. That touched my heart so much, and cemented this "Mug" as one of my most highly revered. Patti Collins even texted the next day to check in about Mom, and once again assure me that God is great, and things will be o.k. That is the kind of people that they are, and while they are certainly the funkiest - they are also the kindest. 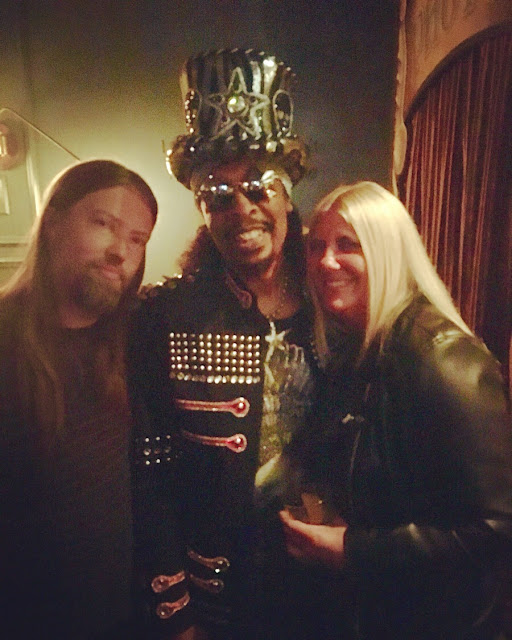 Whatever I can ever do to assist in their Worldwide Funk efforts, and their Bootsy Collins Foundation, that seeks to get an instrument in every hand that wants one - I am IN. Thank you to the Grammy Museum for having us, to KC Mancebo for the invite and the party, and to Bootsy and Patti Collins for making us feel so much better about this world, knowing that people like them are in it.

Bootzilla! (also the name of the Collins' wine label! Get some!)