We eased into Daylight Savings Time in the gentlest, most lovely way possible, with an evening at the Will Geer Theatricum Botanicum for a benefit for pancreatic cancer put on by beloved troubadour, Butch Walker and his awesome friends. The TALPanga (The Autumn Leaves Project) concerts took place on both Saturday and Sunday evenings, to honor Walker's father, "Big Butch", who passed away from the awful disease, and also to raise funds to help those currently suffering from it. 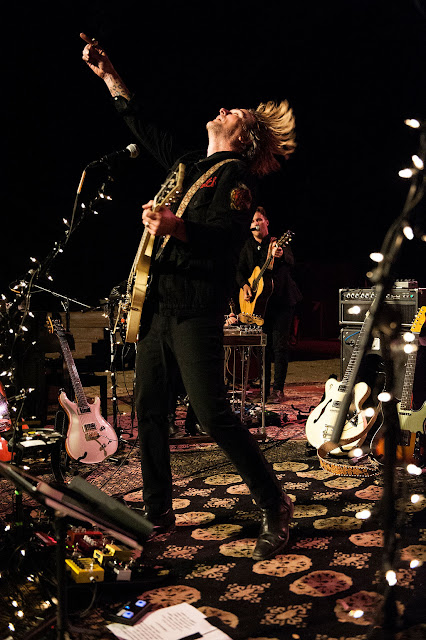 Walker has a lot of cool friends, and they all joined together to bring these magical nights to life in a beautiful and memorable experience for all. The beach was socked in with fog, but by the time we drove the windy road up Topanga Canyon, the sun was out and dappling through the trees that surround the Theatricum, making for an even more gorgeous setting. Tacos Hell Yeah were there serving up delicious Mexican fare, and we enjoyed some of that, along with some cocktails for the cause. An event organizer announced that the first act, Jaime Wyatt, was about to begin, and we all took seats in the wonderful amphitheater to enjoy a night of first class entertainment. 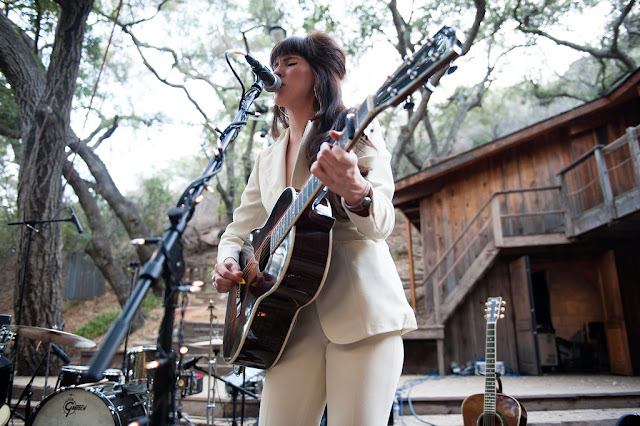 After a few solo numbers, Wyatt was joined by Walker for a lively tune called "Ain't Enough Whiskey", which was then followed by "a song for our Dads", as they both lost theirs - and I bet they would have both loved "By Your Side" with its excellent harmonies, both vocally and on guitar. Wyatt wrapped up her set with a cover of my main man Kris Kristofferson's "Sunday Morning Coming Down" ... and all seemed right in the world just then. 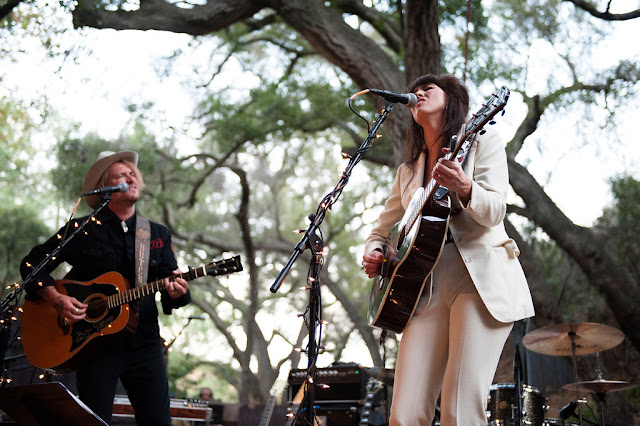 Walker addressed the crowd next, talking about the Autumn Leaves Project organization he founded after losing his Dad. "We raised so much fucking money last night! I had so much love in my heart I thought I was gonna explode!" His gratitude was genuine, and obvious ... and he was ready to get down all over again. As were we.

Grace Potter took the stage, explaining that she was a new mom "So everything is a rhyme". She opened with the Jackie DeShannon classic, "Put A Little Love In Your Heart", which is a perfectly timed request for these times, for sure. The crickets in the woods surrounding us provided great background vocals, making it all the more enchanting. I'd never seen Potter live before, and she is something else. Fantastic. She cracked that she had borrowed everything from Walker to perform - guitars, picks, "This outfit". Her husband brought her another guitar, and after she thanked him, she asked, "Where's the baby?" She seems like someone you'd want to hang with. 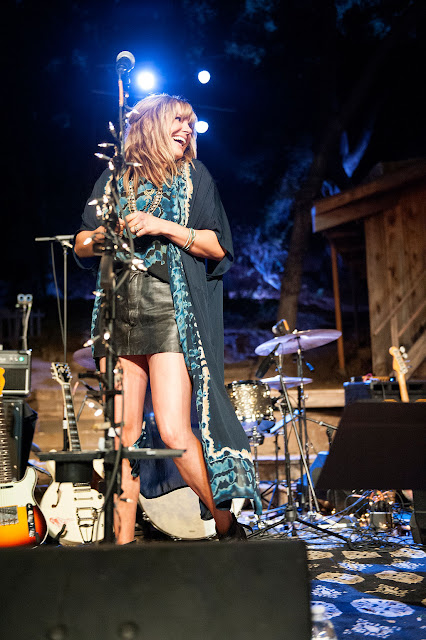 Potter has a new album coming out soon, and played a track from it next, a gorgeous one called "Release". The mic stands were all wrapped in twinkle lights as the stars twinkled above, and you could smell the chaparral in the air ... ahhh. The crowd joined the crickets in singing along for a cover of Neil Young's "Helpless", and then Potter played her beautiful song, "I Can't Look At The Stars" (they make me wonder where you are) for all the people we have lost. I believe those people are among the stars, and it made me want to look at them more. It was like living within a shared prayer at that moment, and one couldn't help but be moved. Grace Potter is a treasure. 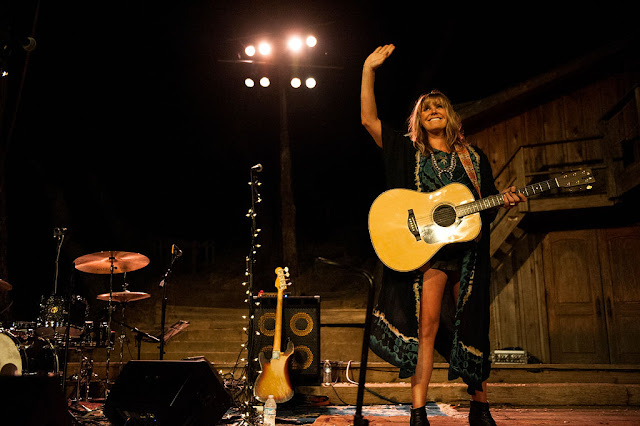 A man who is currently suffering from pancreatic cancer spoke to how much The Autumn Leaves Project has helped him, and told how he has now lived well beyond the predictions of his doctors. His speech put a real face on this dreadful disease, and really connected us to why were were all there. He told Walker that he knew his father was looking down, "So proud of you", and they shared a meaningful hug that brought another lump to my throat. What a blessing to know that there are people who will help you get through these obstacles that life can throw at you ... and no one is alone. 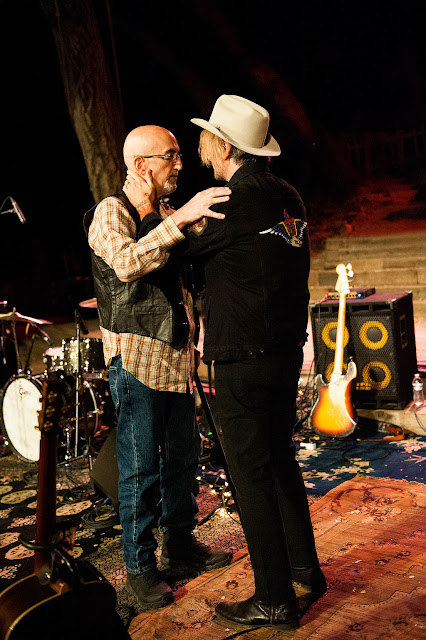 After the previous night's event, there were no more things to auction off for the benefit - other than Walker's well-traveled jacket with its "Butch" patch. As the entire event was streaming live on Facebook, Walker looked into the camera and said, "I hope your name is Butch - or that you swing that way!" Not only is Walker multi-talented and extra versatile musically, he's also hilarious. Another one you just want to hang with. He launched right into his own solo acoustic set, kicking it off with "21+" to the delight of the place that was packed with Walker superfans - of which I am now one too.

The great "Chrissie Hynde" was next, followed by "some more sad bastard shit" that was "Wilder In The Heart" and "Don't Move" with its line about staring at the stars being super fitting. No one wanted to move - and didn't. Here someone yelled, "I love you, Butch!" to which he made everyone laugh by saying, "I like you a lot". Walker is one of the rare ones - a rock star that is actually a super nice and genuine person. There for his friends. Caring. Considerate. Funny. A truly good guy. My friend KC told me that when her dad was ill, Walker called her every day to check on her. Things like that. REAL goodness, not just for show.  Another true treasure of a human being. 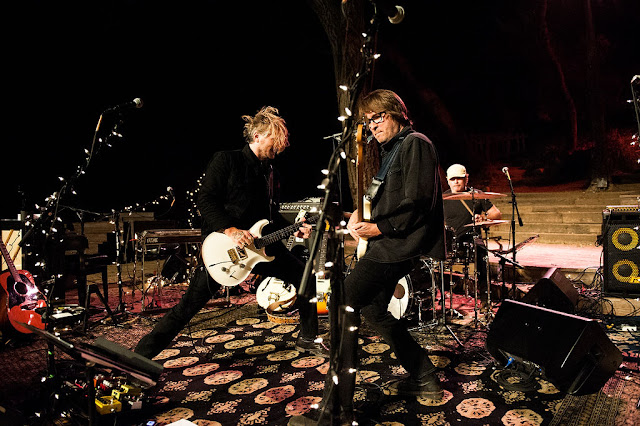 A new one was up next, and painted a whole story with its poignant lyrics about a mean kid calling him names when he was young, ended up being saved by him. "I was born into what I became" is so true for so many ... and this one really spotlighted the deep lyrics and truths that Walker should be far better known for. I feel like Walker should be HUGE ... and he certainly is to his many fans singing along happily in their Butch Walker shirts. The next one was "Pretty Melody" (which it was) and maybe my favorite moment of the night. As Walker sang, the doors of the balcony of the wooden barn on the stage opened up, and Walker's band came out to sing harmonies from above. In a night of magical moments, this one was all the way up there. I loved it.

The band came down from above to join Walker on "Spark Lost" and "East Coast Girl" which I loved with its references to Venice and Abbot Kinney. "It's Gotta Get Easier" was yet another standout, with Walker singing in otherwise absolute silence, save for the crickets chirping along. By now my friend who had never seen or heard of Walker before was also a superfan. You really can't not be.

Walker moved to the piano for "Joan" and "Passed Your Place, Saw Your Car, Thought Of You" in a song that everyone can relate to. Its line, "You can't trust a man. It's a species that captures things just to let them go", resonated with me a lot. Walker is a wise cat. "Sorry for the bummer songs, Jakob Dylan is about to change that." With that, Walker was joined in a group bromance of a set from Dylan and the band that was nothing short of wonderful - especially in this setting. They opened it up with "Nothing But The Whole Wide World" which was my friend's favorite Jakob Dylan song - AND his first time seeing him live. Again, in THIS setting. Magic. 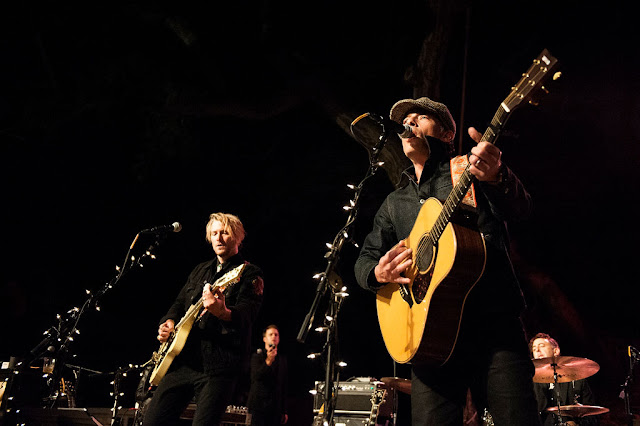 "6th Avenue Heartache" and "God Don't Make Lonely Girls" were both made greater by the fact that it was again two great friends supporting each others' causes (Walker played at Dylan's fundraiser for Crohn's and Colitis earlier this year). Walker had now gone electric, and backed Dylan up on a fiery awesome "One Headlight". They brought Potter and Wyatt back up to join them for a cover of The Band's "The Night They Drove Old Dixie Down", but not before Dylan commented, "How fun and special is this night?!" just as I was thinking exactly that. Because it sure was. So much so that after that one, Walker said, "Don't ever let anyone tell you being in a band sucks, 'cause it's awesome!" Right on. 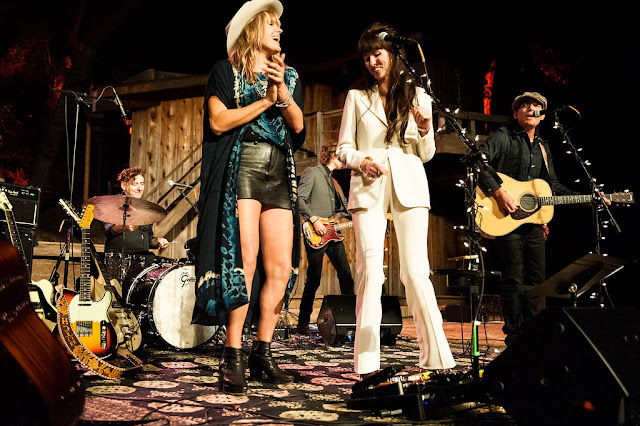 The rest of the show was Walker on his own with his band, playing the fan favorites. He invited them all down front, and they all happily squeezed in down there to sing and clap along for every tune. "Ludlow Expectations" was great, but that's just redundant, because his songs are truly all great. Like "Closest Thing To You I'm Going To Find", featuring a rare accordion/guitar off. Like "The Weight Of Her". Like the covers of "Teenage Wasteland (Baba O'Reilly)" and "Summer Of '69" that prompted one guy down front to shout, "I'm peaking!" Haaaa. At this point we pretty much all were, some more naturally than others, apparently.

The surprise of the night was that Walker was next joined by his old band, The Marvelous Three that disbanded in the early 90's. "Let's play a few for the ladies," said Walker by way of an intro for "Cigarette Lighter Love Song" that was a beautiful ballad dedicated to his mom and sisters, who were all present on this special night for their family. "Mrs. Jackson" and "Over Your Head" were obviously beloved by the fans, as they knew every clap and raising of the bird the song contained. Impressive - and touching. "I'm having a fucking ball!" yelled Walker, and that was clear - and infectious. 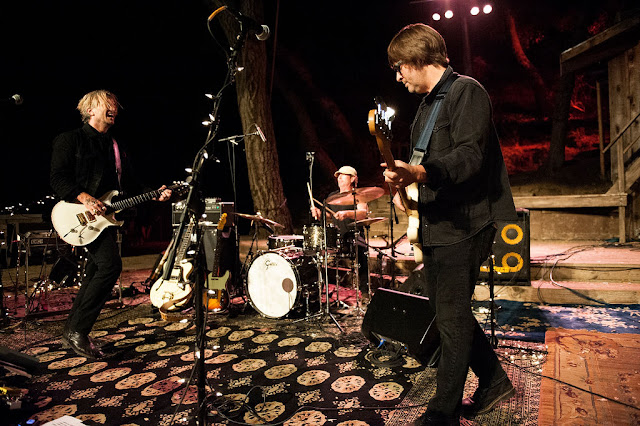 "Every Monday" and "Freak Of The Week" were the evening's closers, and there were so many happy faces singing along that you couldn't help smiling yourself. That it was all for a serious cause that helps so many people made it all the better. The ovation at the end of the show was deafening, and I think people left that enchanted forest feeling a little better about the world and these times. If people and events like this are still happening, it can't be all bad, right? Right. I'd go so far as to say it was life affirming. Good people doing good things is what will save this place - and each other. 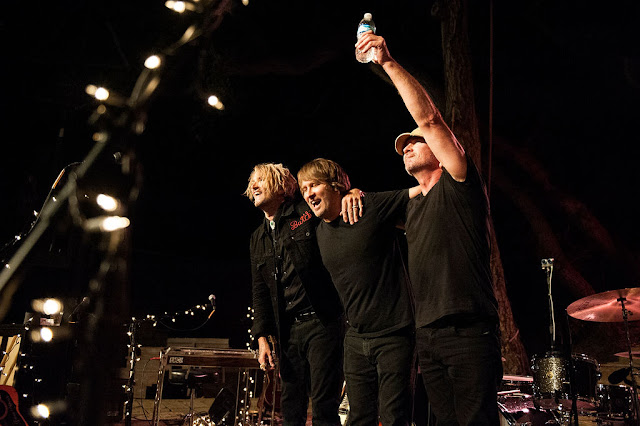 Thank you to one and all involved ... and especially to Butch Walker, for being one of the GREAT ones, doing GREAT things. Thank you.

*All photos by Jeff Forney