Celebrating 50 Years Of MC5 At The Ford Amphitheater - Kicking Out The Jams!

I've seen my friend Brother Wayne Kramer perform a lot of times, but never with his band, Motor City 5, better known as MC5. Until this past Friday night, when Kramer and his cronies performed the Kick Out The Jams album in its entirety for a Jail Guitar Doors benefit at the Ford Amphitheater - and it was something else! 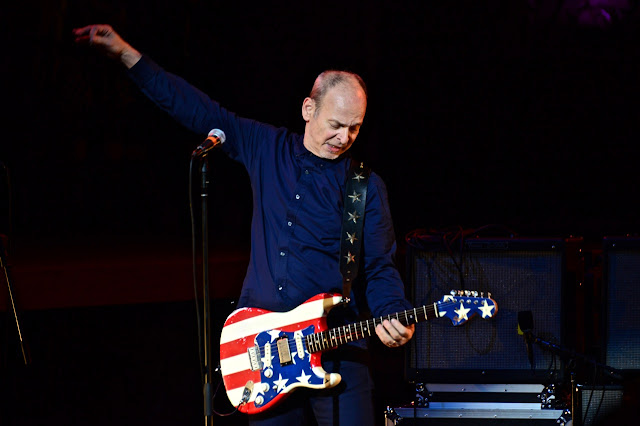 Friday night L.A. traffic found us getting there just as Jason Heath and The Greedy Souls were opening the evening's night of rock and roll with a message. Heath and his band are also great friends of mine, so it was a treat to get to see them rock the Ford stage, with its beautiful outdoor setting and stars shining above. 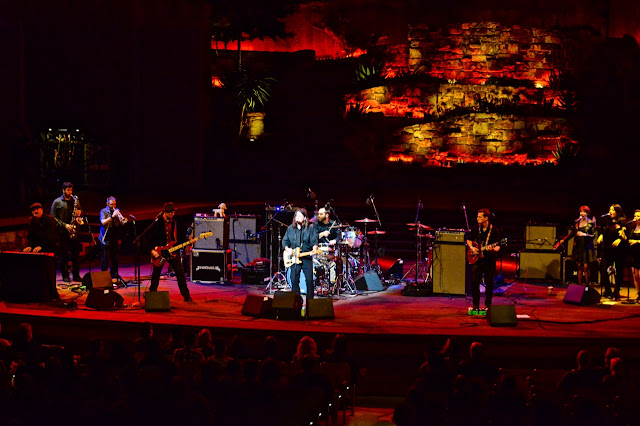 JHTGS opened with "In Love With My Gun" and "Fair Fight" - both pretty topical at the moment. There was a full band along for this ride, complete with horns and female backup singers sounding great. They tore through "Dead Stars" and "Postcards From The Hanging" from their most recent album, But There's Nowhere To Go. I wrote the bio for that album, but haven't had the chance to see its songs performed live in quite a while, so this was awesome to see our pals up there giving it their all. 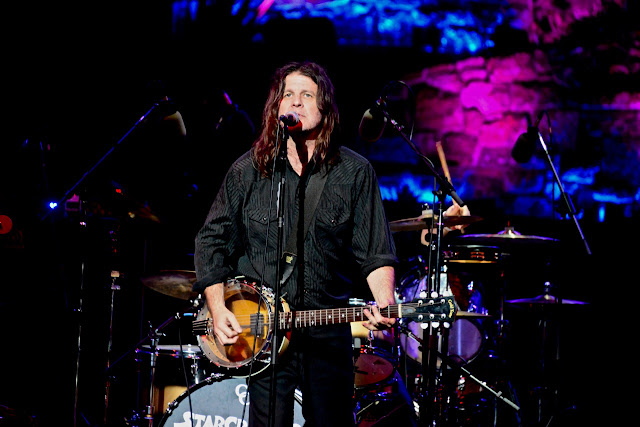 "Thunderstruck" is one of my favorites (and I recently learned it's about Matthew Shepard, the young guy man who was beaten to death almost exactly 20 years ago), and it sounded better than ever, as did "Turn On (The Radio)" featuring Jason Federici on keys, and everyone else ruling hard for the song that Heath said "Is about rock and roll changing the world. I don't know if it can, but we're gonna try". After that throwdown, I think they're on to something. Heath also reminded everyone that the evening was a benefit for the wonderful Jail Guitar Doors organization (founded by Billy Bragg in the UK, headed up by Wayne and Margaret Kramer here in the U.S.), and I thought of Franc Foster who died earlier this year. 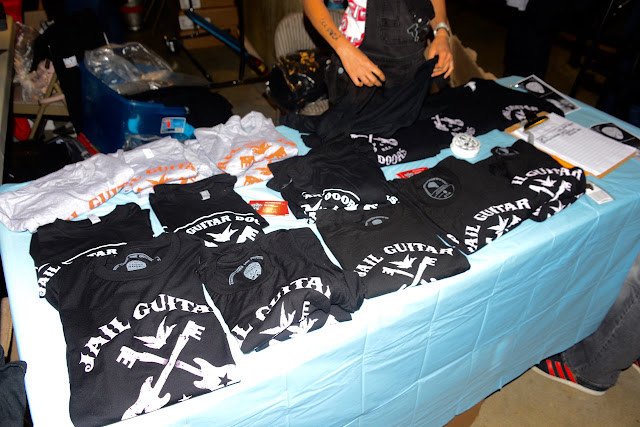 I met Foster through one of these JGD shows, and became friends after writing about his travels from inmate to musical mentor to other prisoners. Foster's presence here on this night was sorely missed. When Heath and Co. played "Nowhere To Go" it got me thinking about how I really don't know where else to go in this crazy world. Where is cool to live? And if you find it, how long will we be able to survive with climate change about to make life on this planet extinct? Deep thoughts, but I snapped back in time to hear "Devil Ain't Talkin'", complete with horns, which I think always elevate everything. I love Jason Heath and The Greedy Souls and you should take any chance you get to see them jam together. Right on. 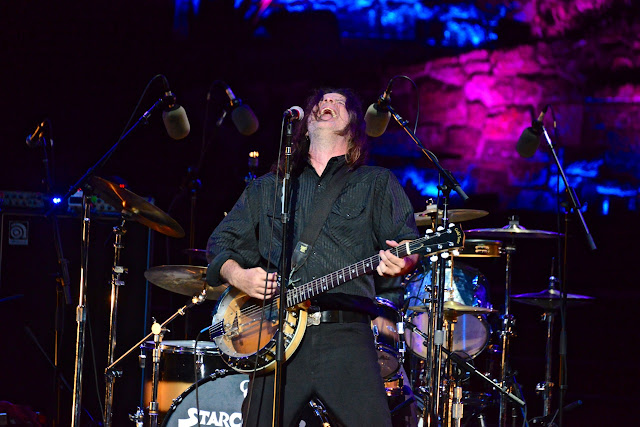 We went to mingle with some friends and missed half of Starcrawler, but heard it muffled from a distance. A photographer we know told us that she'll never shoot this band again because the singer kicked her camera into her face and she had to go to the hospital, so we weren't in any hurry to see some jerks. 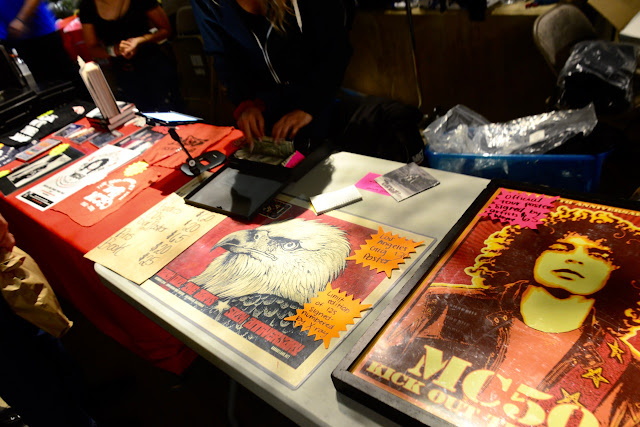 We got back to our seats in time to see the female lead vocalist (Arrow de Wilde) spit up (fake) blood and smash another photographer's camera (she's darn lucky it wasn't Paul's). The punkish rock was o.k., but it seemed to me if it were really good, they wouldn't need such antics. Why be so destructive to people that are helping to promote you? It was a turn off. The crowd - leaning on the older side, as Kramer himself is now 70, and it IS the 50th anniversary of MC5 - was taken aback when de Wilde shouted, "Oh, C'mon, turn up your fucking hearing aids!" You heard an audible gasp, and I don't think this band won any new fans after that. And, it must be said, the crowd never sat down ONCE when MC5 took the stage - so there. 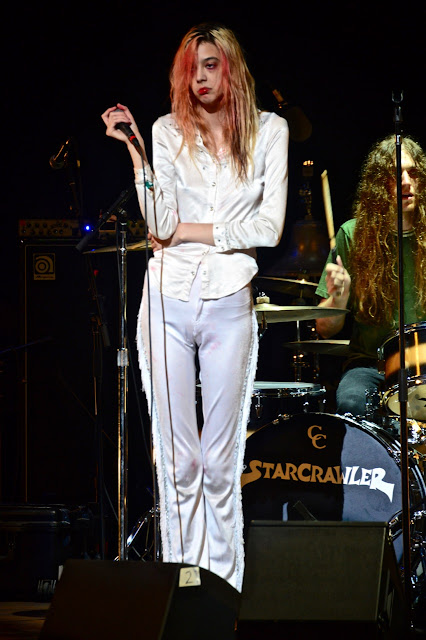 I gather that de Wilde is going for a female Iggy Pop type thing, but it came off as truly disturbed. When she staggered off to the side of the stage, looking all frantic and lost, I genuinely almost left my seat to go help her. She looked so fucked up it was almost scary, but I'm glad I didn't go to her aid, as I most likely would have been left covered with fake blood, which she spread over everyone as she ran out into the crowd and back off stage. The remaining musicians kept playing without her, with the guitarist playing off into the wings. Then they were done and we all kind of shrugged, and looked forward to the mighty MC5 (in this incarnation) taking the stage! 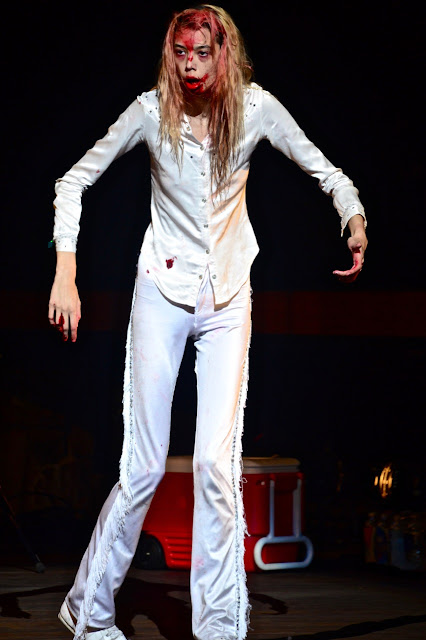 Kramer is the lone original Detroit guy left in the band, that now features Seattle guys (like Soundgarden's Kim Thayil and Pearl Jam's Matt Cameron), and Zen Guerilla frontman Marcus Durant singing lead. Fugazi drummer Brendan Canty, and Faith No More's bassist Billy Gould round the band out, making it a supergroup of expert rockers. Margaret Kramer made a speech on behalf of Jail Guitar Doors, and then it was time to ... KICK OUT THE JAMS!! 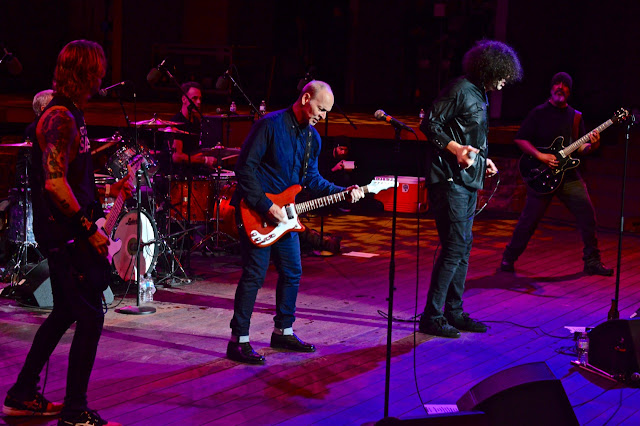 Wayne Kramer led the band on stage RUNNING to the mic stand, and they all tore into "Rambling Rose", and the entire crowd leaped to its collective feet - and stayed there until the last note was smashed. They went straight into "Kick Out The Jams" and everyone's phones were out trying to capture the energy, which was impossible unless you were there. People were going NUTS for this jam that was celebrating its 50th year of being kicked out. It was EXCITING in there, believe me. Especially when Kramer ripped out a guitar solo on his iconic star spangled axe. Phew! 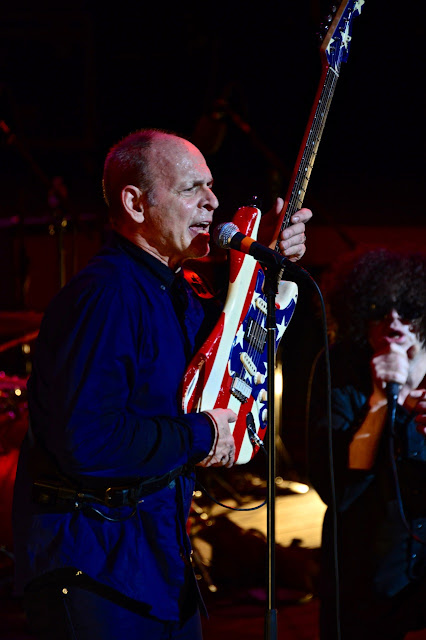 "Come Together" was just as rocking, and "Motor City's Burning" showed that Durant is a very pale black man, tearing up his harmonica while giving the song its very Motown vibey soul. Bluesy and awesome, it was a real standout. Brother Wayne next did band intros, and shouted out everyone on stage, and said, "I'm so happy to be here tonight with you in L.A.!", and we were all so happy about it too. "Rama Lama" showed off everyone at their best, and even featured some ass shaking from Kramer, as well as a guitar battle between him and Thayil. SO good. 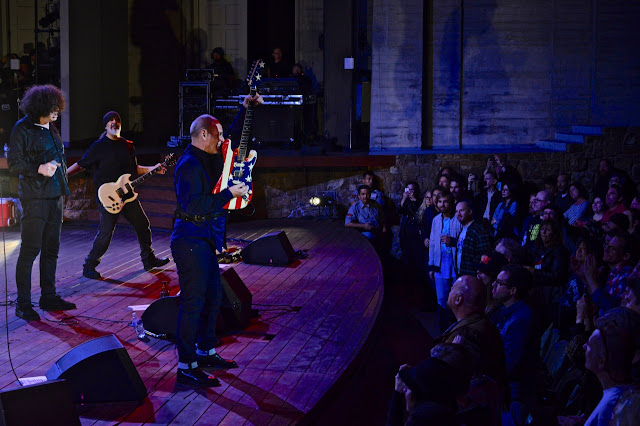 That this guy is now 70 is proof that rock and roll keeps one young at heart, and Kramer was pulling Townshend-like arm windmills on "Borderline" and cranking out more electric solos on "I Want You Right Now", which was awesome. "Starship" got very acid rocky, and it was clear that this one was written in the groovy late 60's.  They ended the song all pointing up, as if to ask the aliens to please take us now. To have mercy on us. 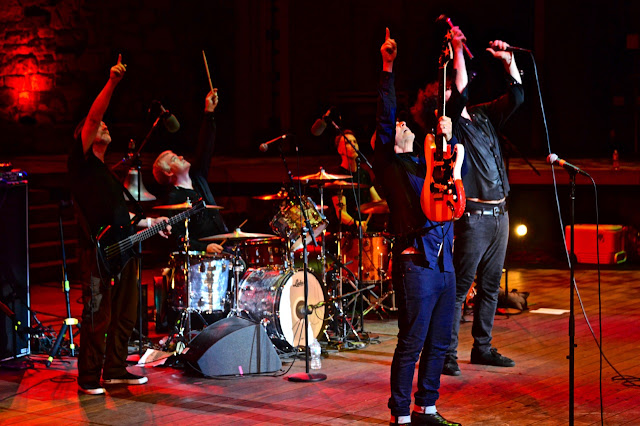 Not a person had yet sat down - in Los Angeles - and wouldn't for the remainder of the show. I've been at a LOT of shows in L.A. lately, and this never happens if there are seats. The once in a lifetime experience that this was (and that I kept hearing people say that) amped up the electricity in the venue, and people were going to be rocking for its entirety. RAD. 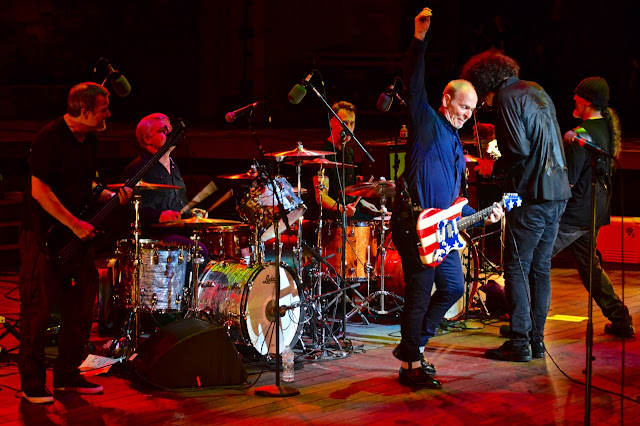 Kramer acknowledged his band mates that made this music together 50 years ago, then strapped on an acoustic guitar for "Shakin' Street", which ruled. The guy behind me said, "If they play 'Future/Now' I'll shit my pants!" - which they next DID play, and I was nervous to look behind me to see if he had actually shat himself, but I could hear that he was very happy by his shouts. Good for him! 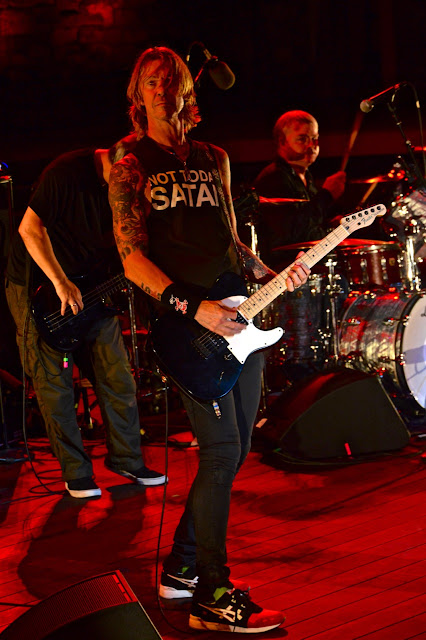 "Please welcome our good friend, Duff McKagan!" shouted Kramer, and welcome the GNR legend we did. He joined the and for "Call Me Animal" and they just beat that song to a pulp. While they were all simply shredding, a trio of horn players walked on to the stage, and once again brought the energy even higher. Kramer introduced them at song's end as "The Parolee Horns!", and then introduced another special guest, Greg Dulli from The Afghan Whigs! Awesome.  Dulli TORE through a fast paced "Let Me Try" and "Skunk", and the place went wild. The guys on stage were getting a full cardio workout, and the audience was doing their best to keep up. Phew! 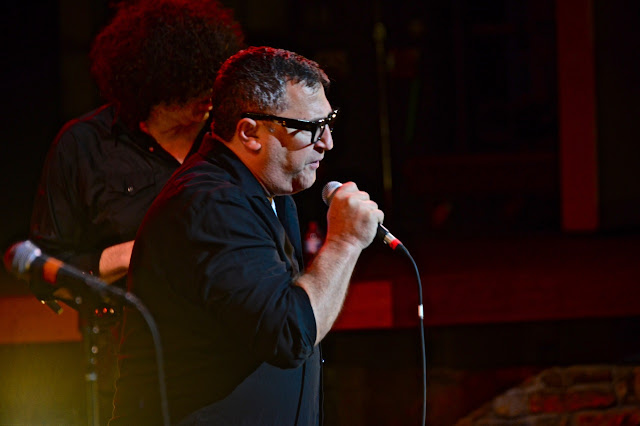 After that frenzy, Kramer took a moment to speak his mind. "I know our country's going through tough times. There's a rapist on the Supreme Court, there's a rapist in the White House ... but it is our right to exercise our power  - and we do that when we VOTE!" A "VOTE!" chant started up, as everyone was SO fed up at the SCOTUS news of the day, and Kramer continued, "We can save this world, but we gotta get to WORK. We're gonna let those bums in Washington know, WE'RE LOOKING AT YOU!" and they blazed through "Looking At You" just to show 'em. 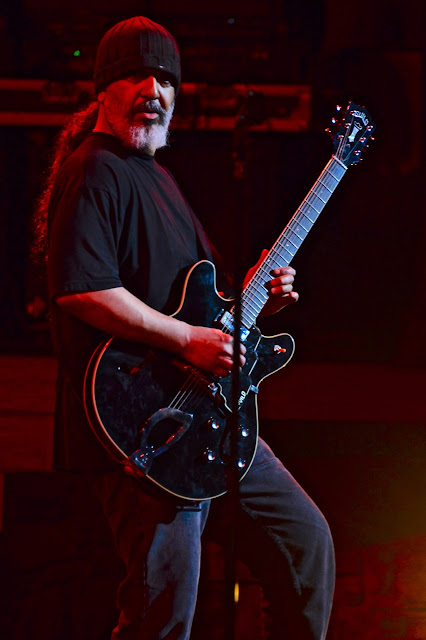 Everyone came back up for a raucous run-through of "Sister Anne" for the final hard rocking All Star jam. Thayil's fingers were flying, and everyone was giving it their absolute all. The crowd ate it up and shouted for more, but there's a curfew. Kramer shouted, "Thank you all! You are terrific! See you next year, same time, same station ... GO VOTE!!!" 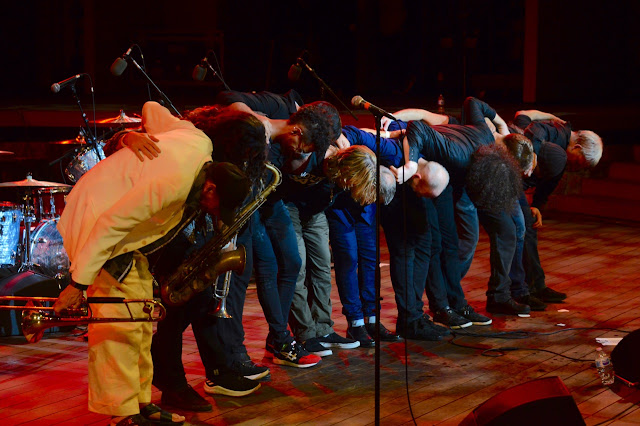 The musicians had a group bow together, and left the stage. They left everyone else standing there shaking their heads in amazement at what they had just seen. LOVING it. There was a little backstage soirée, and I got to catch up with my Justice Tour Alumni (a tour we did with Tom Morello a decade ago!) friends, all of whom I love so much. In dark times like these, it is reassuring that there are people who still believe in good, and still try to do something that matters in this world. Like bring music to inmates in order to create a better life for themselves. Like doing benefit shows just for the good in it. Like urging people to vote with their voices that people might listen to. Like simply caring. And if you can do all of that while rocking faces off - even better. 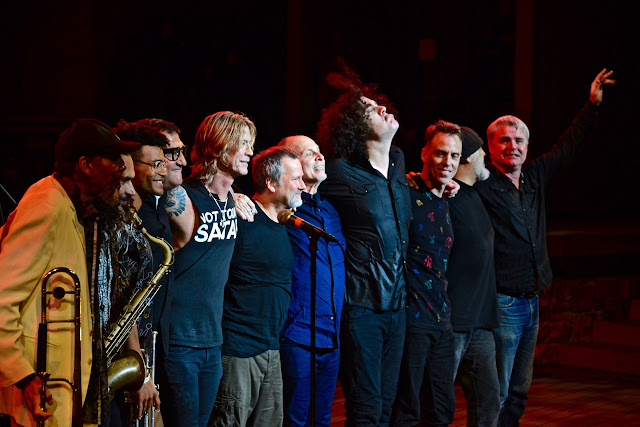 Thanks and LOVE to all the Jail Guitar Doors friends and family who made this momentous night possible. As for those jams? They done kicked 'em OUT! 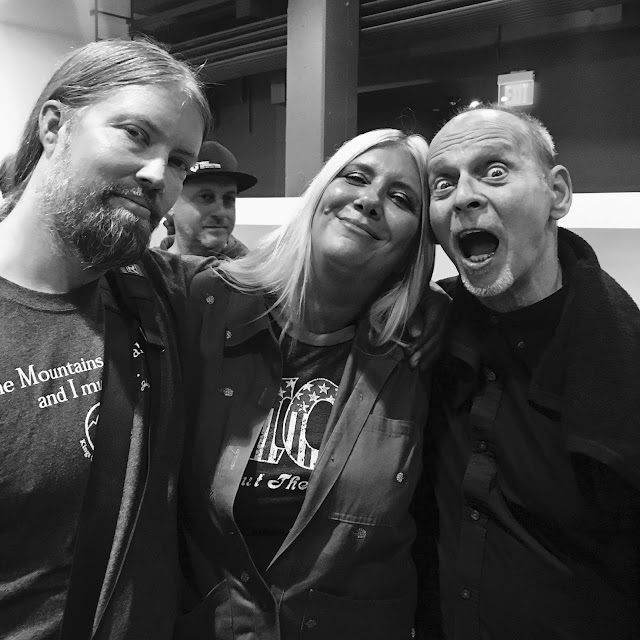