Oh, MAN! I finally got to see Willie Nelson live and in person! At The Hollywood Bowl! For the final stop of The Outlaw Music Festival 2018! Deadheads and Willie fans unite! And it was awesome. 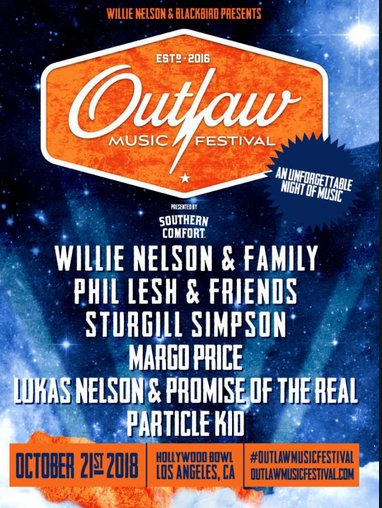 The only drag was that it wasn't a true Hollywood Bowl event, but a leased one, which means you can't bring in your food and drink like you normally always can - and it started at 5 p.m., which also never happens, so we were late. We missed Particle Kid (Willie's son Micah's band), we missed Lukas Nelson & Promise Of The Real (Willie's son Lukas' band, which was a major drag we would find out later), but heard he played a song from the new A Star Is Born, which I'm not about. Kris Kristofferson version forever (and as it was the "Outlaw" Festival, I kept hoping KK would be a special guest at his good friend's gig, but nope. We ended up getting there for the tail end of the wonderful Margo Price though. We heard her singing "9 to 5" and thought it really might be Dolly singing (you never know - there are often surprise guests in L.A.), but it was Price belting it out in an uncanny resemblance. I'll be happy to see her whole set one day.

Sturgill Simpson was up next on the rotating stage, and came out wearing a t-shirt that read, "If you hear any noise, it's just me and the boys boppin'". I really can't tell you what his set list was, because he is one act I can never make out what he's saying. I've seen him before, and thought how much better he would be if he could just enunciate his words a little bit. His voice reminds me a bit of Waylon Jennings (high praise), but Waylon I could understand. 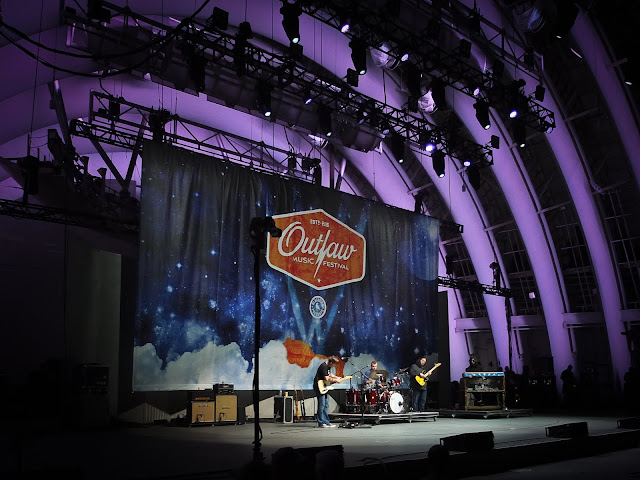 Simpson and his backing band pretty much made up for the slurring with their excellent playing, with Simpson playing his guitar like it was on fire - and I think it probably nearly was. He mentioned that it would be his last show for a while, as he had his third son born just last Wednesday, and it was time to take some time off to be a Dad ... "But we have cool shit coming next year!" A song I COULD make out, was "The Promise", a cover of the old When In Rome song that Simpson country-rocks up.

I ran into a friend after Simpson's set, and he said, "Sturgill was ROCKING!" - which he fully was. The singing was actually kept to a minimum, and it was basically a guitar shred-athon. "You Don't Miss Your Water ('Til The Well Runs Dry)" was another one I could make out, and it was great. The guy facing us and doing air guitar for the crowd especially thought so. Good times.

After the break, Phil Lesh from The Grateful Dead was up. There were a whole bunch of happy Deadheads in tie-dye, up and dancing in that Dead style that is really hard to explain. Lesh and his band got down with Dead classics like "Althea", "Brown Eyed Woman", "Sugaree" - and that got even the Cowboy-hatted people happy and dancing. Lesh himself let his band (Jackie Green, Jason Crosby, Nathan Graham, and Cris Jacobs) take on most of the heavy lifting, seeming pretty frail of voice and body himself. When he did take over lead vocals, joyous shouts would go up from his faithful followers, acknowledging his legend status to them. It was touching. 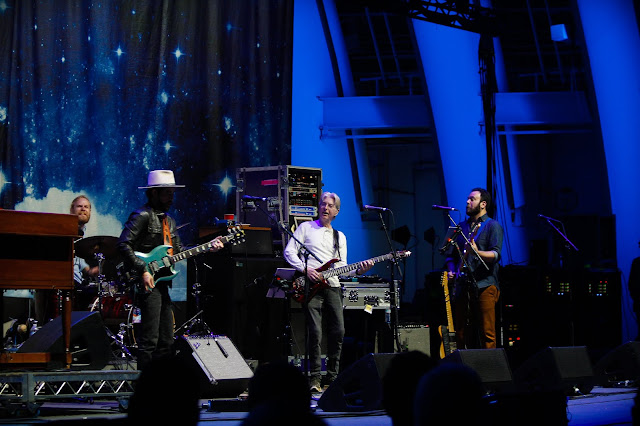 When they sang "All New Minglewood Blues", and its line, "A couple shots of whiskey and I'm going back to Hollywood", it received self-congratulating yells from all of those here in Hollywood. Hollywood lines are always crowd pleasers at The Hollywood Bowl. "Candyman", "China Cat Sunflower", and "Shakedown Street" were all pretty good, especially if you ever followed the Dead - which I didn't. Some songs were like 20 minutes long feeling, and often a bit off and/or sloppy, so it was kind of easy to tune out and just enjoy the moon and stars, which I did. 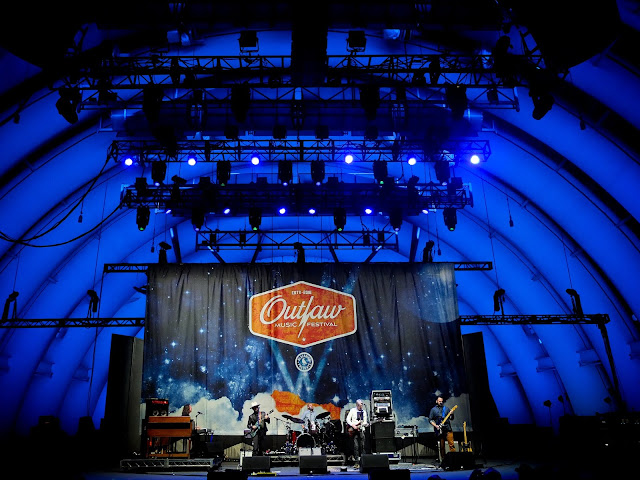 Lesh welcomed back Margo Price to join them for "Turn On Your Love Light", and she elevated the whole proceeding with her gorgeous and powerful voice, and spirited tambourine playing. It was nice to have a woman there, as the whole Outlaw thing can definitely use some more women. And Price is great.

The house played Willie Nelson while we were waiting for Willie Nelson, which isn't usually done, but it got us hyped and ready for The Red Headed Stranger - who is a stranger to no one. When Nelson took the stage in his Dodgers jersey (Turner #10!), the whole place stood up and cheered. "How 'bout them Dodgers?!" he shouted, and all the Angelenos in attendance roared for their team that is going to the World Series for the second year in a row!  I wasn't prepared for how excited I was to finally be seeing the legend that is Willie Nelson - in person! With his famously beat up guitar, Trigger! I had chills and kind of choked up. They lit right into "Whiskey River", and all the faithful sang their praise along.

Nelson and his family band were backed by a giant Lone Star flag behind them, and "Still Is Still Moving To Me" was up next. I love that song because it was included in a reggae version on Toots & The Maytals True Love album, which I hold dear.  Nelson kind of sing/talks these days, and you can tell he's been doing these songs forever. I wore braids to honor the man, and he soon tossed off his cowboy hat to some happy fan in the crowd, revealing his trademark red bandana and two long braids. What a legend.

"Let's do one for Waylon!" shouted Nelson, and they got down with "Good Hearted Woman", which was as great as you'd expect. The man next to me kept just laughing, like he couldn't believe he was really there seeing this. I get you, buddy. People were SO happy to be there. Nelson introduced, "Little sister, Bobbie", who is a wizard on the piano (and recently inducted into the Texas Music Hall Of Fame!), with her waist long hair covering her face as she focused on the keys. She tore through a solo, accompanied by her brother on guitar, and it was super moving to see them still playing together after all of these years. And moving all over again to see Nelson play with his sons now, who he next introduced before launching into "Texas Flood".

O.K. This was the absolute highlight of the show for me. Talk about A Star Is Born - Lukas Nelson RULES. The entire house was mesmerized as Lukas soared over us all, with both his excellent voice and electrifying guitar skills on this bluesy number that left everyone speechless, with mouths hanging at how very close this apple fell under this particular family tree. Holy smokes. There was a little guitar battle between father and son that Willie ended with a little  twang that made Lukas smile and us laugh. Lukas would play so hard he'd have to push his glasses back up on his nose, and in that moment, I got a brand new crush. What a talent. I know I'm late to the game, but everyone needs to check out Lukas Nelson immediately if you haven't already. Whoa.

They followed that show-stopper with "Mamas, Don't Let Your Babies Grow Up To Be Cowboys", and that classic had the whole place lit up and singing along. I say let 'em, Moms. Cowboys like this are exactly what you want. "Angel Flying Too Close To The Ground" slowed things down a bit, as this lovely ballad had people slow-dancing together in the aisles. Then "On The Road Again" got people back up singing and dancing together, then one of my very favorites, "You Were Always On My Mind", which was slow and beautiful and moving to tears. Nelson would raise his arm up each time he sang the title line, indicating that his fans are always on his mind - and you can feel it.

"Let's do one for Merle!" with another shout out to another lost friend of Nelson's. It seemed like the entire venue smoked along to "It's All Going To Pot", which rolled (get it?) right into "Roll Me Up And Smoke Me When I'm Dead".  It was apparent that all were having a grand old time, both on stage and off. This was kind of the novelty song section, as those weed smoking tributes were followed by the ode to internet rumors, "Still Not Dead Today". Everyone laughed, but also threw up a silent prayer that this song can keep being sung by Willie for a very long time.

"Jambalaya (Fun On The Bayou)" made sure that we had fun in the Bowl, as did "Hey, Good Looking"  and "Move It On Over", which kept people dancing and singing along. The folks in the box next to us moved out their chairs and had their own private little dance floor, in an inspired move.

"It's almost that time again, and if you don't like who's in there, Vote 'em out!" implored Nelson, as they gave us the brand new song by that name. It was met with cheers and it seemed likely that the voters in the house (ALL, I hope!) will do just that. Nelson wrote it for the Texas battle between Beto O'Rourke and Ted Cruz that seems like an absolute no-brainer. Go Beto! Go Democracy!

The last song/s of the night (there was surprisingly no encore) was a medley of  "I Saw The Light/I"ll Fly Away/Will The Circle Be Unbroken" and hopefully all of our country will finally actually finally see the light. Nelson brought back up everyone involved in this Outlaw show (but not Kris Kristofferson, sigh), and once it ended, he waved and blew kisses to the crowd that never wants to see him go. A true Outlaw. A true Great. A true Legend. There will never be another dude like him, and I was filled with happiness that I finally got to see this great American treasure live ... and that with his great kids, the circle will remain unbroken. 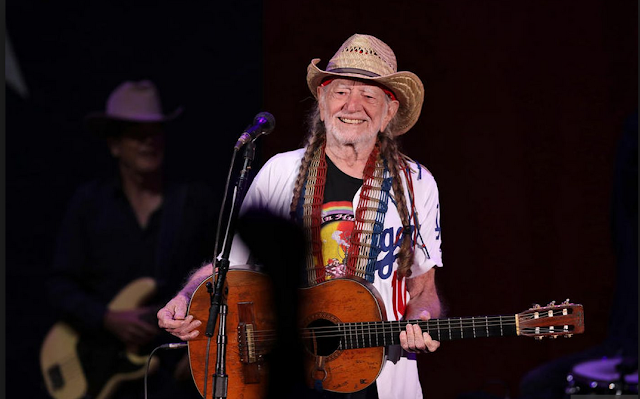 Thank you, Willie! Thank you to Outlaws everywhere! What a night.

*Photos of Willie were not allowed (!) so the one you see is lifted from the L.A. Times. All others by  Paddy Wilkins.