A Conversation With Lenny Kravitz At The Grammy Museum

I've been a fan of Lenny Kravitz since we used our fake i.d.'s to get in to see him at First Avenue in Minneapolis back in the day. It was freezing cold out, but about a zillion degrees inside that fabled club as everyone was squeezed in tight to see him play a 15 minute version of "Let Love Rule" to close out the night, making us feel like big peacenik hippies all together who could really make a difference. It was a special show, and I've never forgotten that feeling. 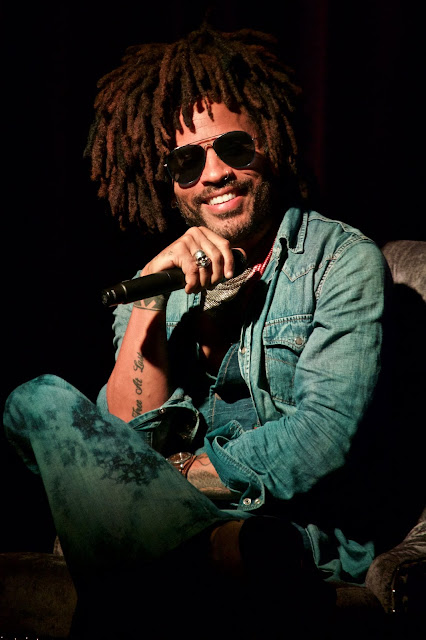 Last night at The Grammy Museum in Downtown L.A., I got that feeling all over again from simply listening to him speak. Kravitz is a real cool cat, and his conversation with Grammy Executive Director, Scott Goldman was intimate and inspiring, but also very touching. I got choked up more than once. Introduced by Goldman as an artist who transcends genre, style, race, and class, who has won 4 Grammys, had 11 studio albums selling in the millions, and is an actor too. Kravitz was there to discuss his most recent album, Raise Vibration - and that's exactly what he did in that room - without ever playing a note (which was kind of disappointing, if I'm honest, as usually they have a chat and then a little mini-set at the Grammy Museum, and this time only two chairs and mics were on the stage). 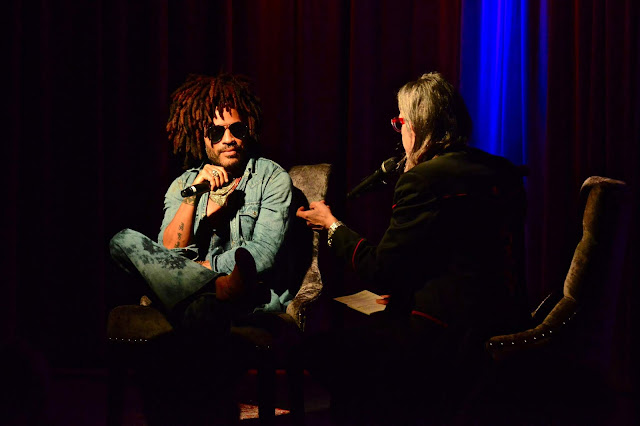 Kravitz, dressed in denim and shades on inside, spoke to how the recording of Raise Vibration in his home studio in the Bahamas was "an exercise in faith and patience ... I let the creative process be what it wanted to be." Three years had gone by since has last album, and there were a lot of outside opinions on what Kravitz should do next - most all of which he ignored. "I grew up West Indian and Russian Jewish ... it was all about respecting the elders. I've got people saying 'You've got to remain relevant' - what the hell does that mean? It's about respect. I produce my albums." He met with the hit songwriters of the moment, but "I didn't feel it in my gut. Authenticity is IMPORTANT to me." That much is clear. To that end, Kravitz went to the Bahamas and woke up with the dream of this record in his head ... and "The floodgates opened, and the whole album came out. I dreamed the whole record ... You just hear it, it's really hard to explain. I knew I was on MY path." The entire album was recorded, produced, and engineered by Kravitz and his dear friend and musical partner, Craig Ross ("His Mom is here so we have to talk about him!"), and they did it exactly their way.

Once living in his pea green, rented Ford Pinto and working at Leroy's Fish Market ("On Washington and Rimpau"), Kravitz said about those times, "I never said I wanted to be a Star. I said I wanted to be a Musician." That earned him both applause and respect in the room, as most people who attend things at the Clive Davis Theater care about the music, not the hype.

Often described as "Retro", Kravitz laughed at that, saying, "I like to play instruments. I like to hear the character of the players ... their hands ... it's not coming out of a box." The environment helps too, and about working in the Bahamas, Kravitz said, "That's where my roots are ... I FEEL the Bahamas. You can hear and feel yourself there." Both his first manager (Steve Smith) and the man who signed him to Virgin Records (Jeff Ayeroff) were there sitting in front of me, and once Kravitz got his first advance ("Remember when you used to get an advance?"), he bought his land in the Bahamas - and a Harley. The studio he built on that land is where Kravitz has recorded his last three albums, including Raise Vibration.

Digging into that album, Goldman asked Kravitz about some of the tracks and themes on it, starting with the song, "Johnny Cash". Kravitz said he woke up with the phrase, "Hold me like Johnny Cash" running through his head, and he couldn't shake it. He sat down to write about a breakup he'd been going through (I'm available for consoling, Lenny), and couldn't get that refrain out of his head. Then he shared the very moving story of his mother (Roxie Roker - Mrs. Willis on The Jeffersons - one half of televison's first interracial couple) dying from cancer. Kravitz had been sitting at her hospital bedside for days, and left only to go shower at producer Rick Rubin's house, where he had been staying. The mere 30 minutes that he was gone was when his mother passed away. He got the call on a house phone at Rubins' house, and as he received the terribly sad news, Johnny Cash and June Carter walked down the staircase to him. They were there to record Cash's American Recordings, and instantly saw something was wrong with Kravitz. He told them his mother had just died, and they both enveloped him on either side in a group hug of consolation and comfort and spoke to him almost in prayer, though they all barely knew each other. "God always provides what you need ... and that's where I got 'Hold me like Johnny Cash'." The hushed room broke into applause - and tears, if you're me. 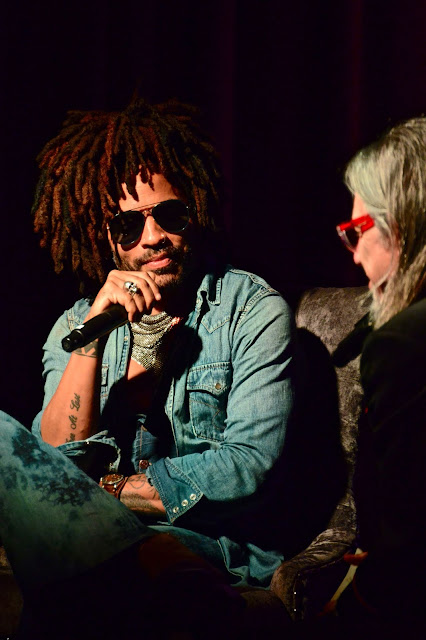 "Do you consider yourself an activist?", asked Goldman, to which Kravitz simply replied,"Yeah." He elaborated, saying that 30 years later ("Good God!") in his career, he's still not even close to who he will become. "I've done nothing yet ... Activism, I know I'll be stepping deeply into." That brought up his friendship with Colin Kaepernick, who Kravitz said he admires for "Standing up - or kneeling down - for what he believes in." He talked about how if you look back at footage of Muhammad Ali, he said whatever he felt, and "That stuff was hardcore!" We all respect the flag, but "Let's focus on what's important. National Anthems are great, but it's ONE planet, and our survival depends on working together. We're ALL ONE." I was happy to see that those good old "Let Love Rule" vibes remain very much intact with this guy.

They next spoke about how there are vocals by Micheal Jackson on the new Kravitz song, "Low". Kravitz had worked on Jackson's Invincible album, for which these vocals were recorded, and they were good friends. "It's cool to have his spirit and sound on "Low" - his screams are an exclamation point on it." He said he's heard dissses like, "Lenny thinks he's slick trying to sound like Michael" and that he was biting from him, "Like it was wack" - but it's really him. The Jackson Five were the first concert Kravitz ever went to, and it made him realize, "It was everything about life that I wanted. It changed my life." When he got to record a song with Michael, and they listened to the track together, Kravitz said, "His leg went out -  WHOOPASH! - and I knew it was good." Everyone laughed at that, but Kravitz obviously revered Jackson, saying, "It's so beautiful to remain humble, hungry, to hone your craft ... He did it all, but he was still hungry. That's the way to be, Man." GROWTH.

"All I'm interested in is being myself," said the guy who realized he didn't need to be "Romeo Blue" anymore (his original stage moniker) - he was Lenny Kravitz (who he said sounded more like a lawyer or a psychologist, but this one is definitely himself - and definitely a Rock Star). "You get influenced, and then you find who you are." Race didn't matter to Kravitz until first grade when he went to school and it mattered to other people. His mother told him, "You're black and white. 50/50. Celebrate BOTH sides - but society will only see you as Black." Kravitz thought, "Well, didn't Black people invent rock and roll?" and was just fine with that.

Prince was another big influence on Kravitz, starting in high school (at Beverly Hills High, where he brought the "Culture" from Baldwin Hills. "They had Rodéo Drive - We had ROdeo.") with the Dirty Mind album. "Here was another young, biracial guy I could relate to. He didn't act like anyone else. He didn't look like anyone else. I got DEEP into it." After Let Love Rule came out, Kravitz got a call from Prince. PRINCE! They struck up a friendship, even double-dating French girls when they both were living in Paris. They would play gigs and guest on each others' stages, and Prince would give him a bag of money after. "He's the only person that ever gave me a bag of money." They were friends until he passed away, and of the new song "Gold Dust", Kravitz said he wrote it the morning that Prince died. After he was gone, Kravitz was given Prince's guitar - a main one that he used all the time on stage. "His guitar is all over this album. His energy was in the room and brought something special to this album." And it's true. You can hear and feel it. 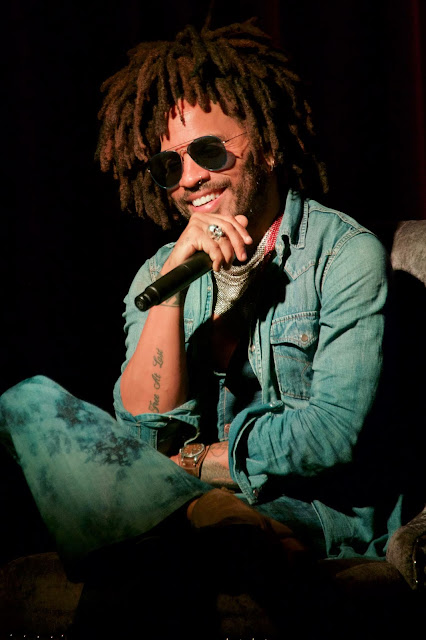 Kravitz credited his time with his love, Lisa Bonet, as what really got him started at being a good songwriter. They had a hippie lifestyle, very much in love, and very free. "No one could figure out what box to put you in," Goldman suggested, to which Kravitz offered his advice to new artists - "Do You". They next opened up the floor to questions, which ranged from if he considers his music gospel ("Absolutely. The first track is a prayer.") to not very subtly asking if he'd work with someone in a studio that he didn't know ("You never know.") to how he likes acting compared to music ("Let's be real, I've only made four movies. I like not having all the control, and I want to do more of it.").

Going back to Craig Ross, Kravitz said their friendship is a gift. He had just made Mama Said and was playing pool at HAC (Hollywood Athletic Club for those of you who remember that), and Charlotte from The Go Go's pointed to a guy with "A big Jewfro" and said, "There's your new guitar player" - which Kravitz needed. "We're always together, he moved to the Bahamas too ... we've never had an argument ... he's never asked for something and been said 'no' to, and I've never asked him something and been said 'no' to. We're like brothers." Then Ross's mother in the audience shouted, "Thank you!", and it choked me up again. So sweet. 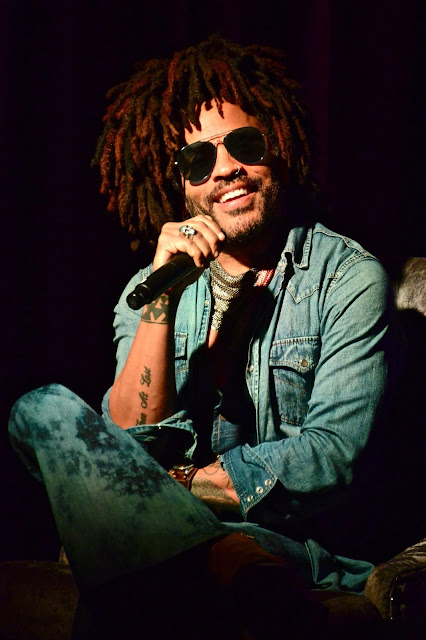 Reflecting on the fact that Let Love Rule is coming up on 30 years old (!), Kravitz said it was a very special record to him ... "My dream came true." "I caught the tail end of the REAL thing. Real music executives who knew what was going on. It was me, but a very different me. That album set the tone of my music and my message, and from then until now, I've never left my message." The message that we'd all be so much better off if we all agreed to let LOVE rule. Thank goodness we still have artists like Kravitz to remind us of that, have always done so, and will continue to speak their truth to power. 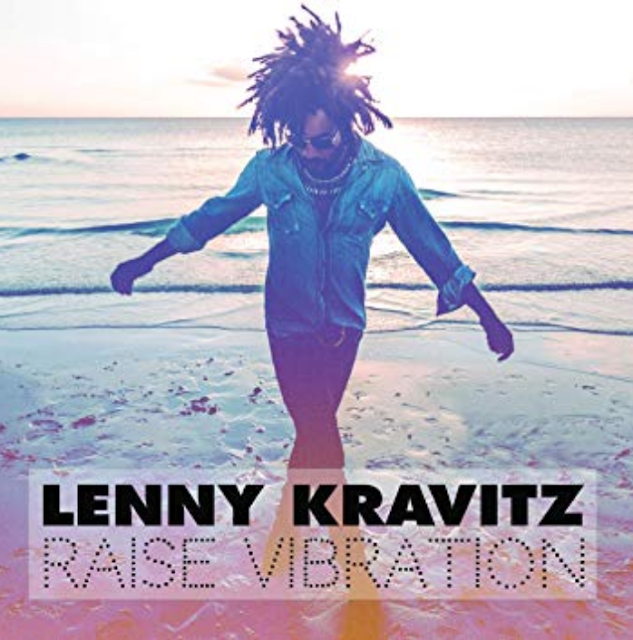