The 50th Annual Festival Of The Chariots!

Yesterday was a beautiful day for a Hare Krishna parade, that's for sure. The 50th Annual Festival Of The Chariots brightened up Venice in their yearly celebration that brings music and color to all of Venice, regardless of religious affiliation. 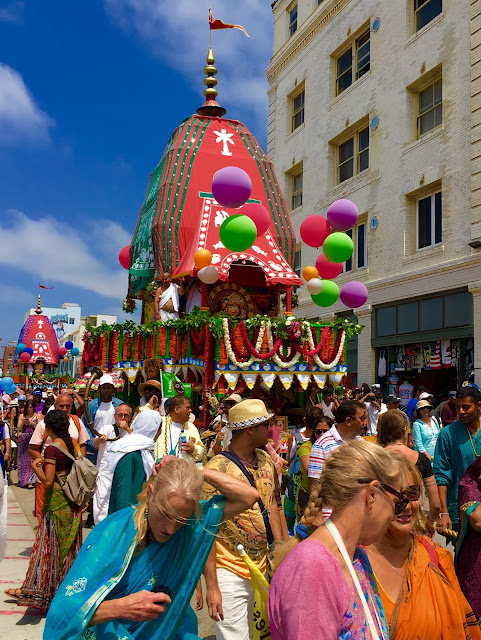 You'll most likely never see most Venetians with shaved heads and saffron robes chanting "Hare, Hare, Krishna!", but that doesn't stop anyone from dancing and parading along with the monks of the order. I've been out of town for the last few festivals, so it was a delight to attend again yesterday for their milestone jubilee anniversary celebration. 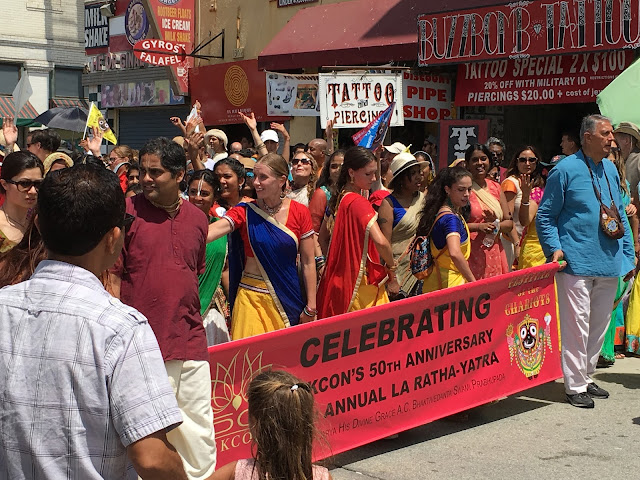 My favorite part every time is when the unsuspecting tourists see this spectacle come upon them. Everything stops as the enormous, marigold-bedecked floats pass by, pulled along by Hare Krishna devotees. Everyone chants and sings and bangs drums and blow horns and the whole thing is just a visual and aural kaleidoscope of positive energy. You can see the wonder and surprise on all of the visitors' faces as the parade envelops them in a massive group hug. It's special, even if you've seen it all 50 times. 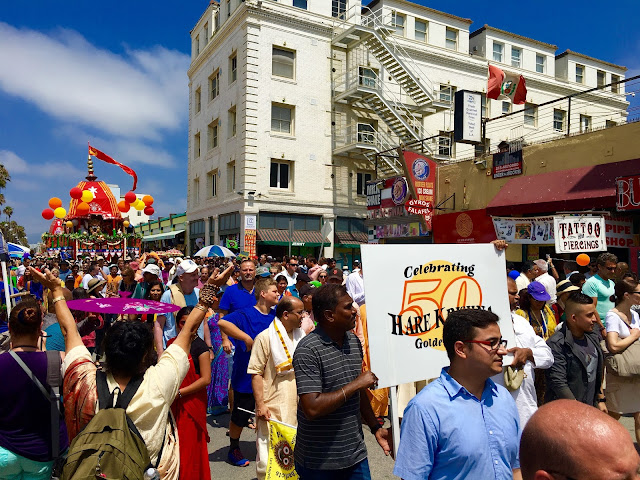 I saw a bunch of old friends, kids waving from atop their Dad's shoulders, tourists on tip-toe aiming for the best angle to capture this - to them - once in a lifetime deal. As the procession went along, it picked up more and more revelers, as passersby and the general Boardwalk crowd would join in and walk and clap alongside their fellow fun havers. 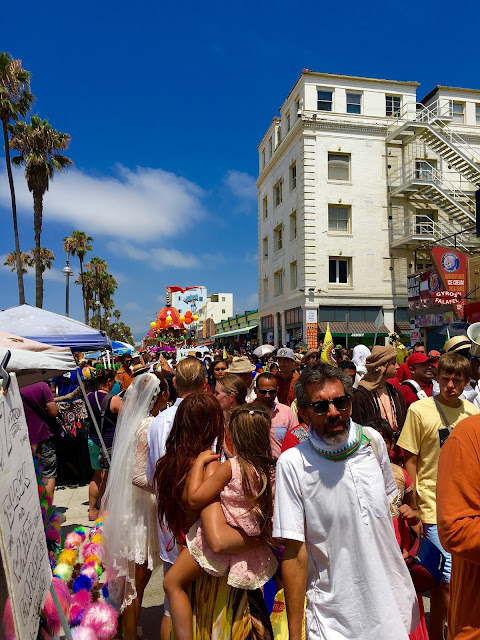 The only drag in the whole day - as it is every year - is the group of protesters that hold up their hellfire signs and yell through bullhorns about how we'll all burn in hell. Um. Yeah. Here's a whole group of happy people dancing and singing together in the sunshine, holding workshops about enlightenment, offering a free vegan feast to all who wish to partake, with everyone calling each other "Brother" and "Sister" - and they're the ones going to Hell. 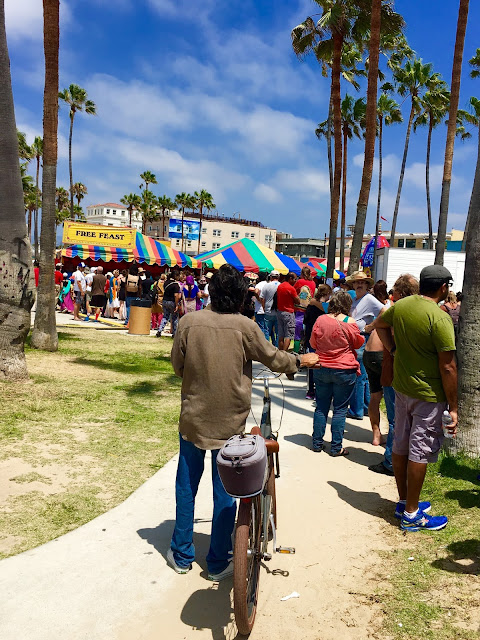 I highly doubt it, and also highly doubt that Jesus would condone the foul behavior of the (mainly middle-aged white angry biker looking men) Bible thumping agitators. But you know what, Free Speech. And the cops are there to separate the two factions, should it get out of hand, but mostly all the Hare Krishna party just laughs at them and their signs with the black metal fonts insisting on gloom and doom. Dumb. 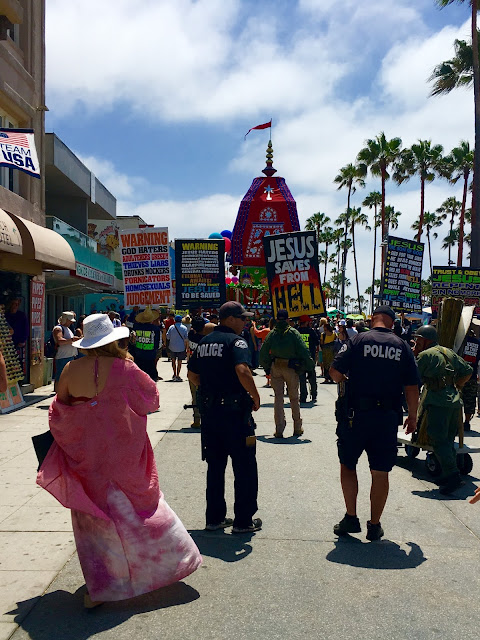 The hatred was easily forgotten, however, in light of the explosion of color and joy that was going on all around. 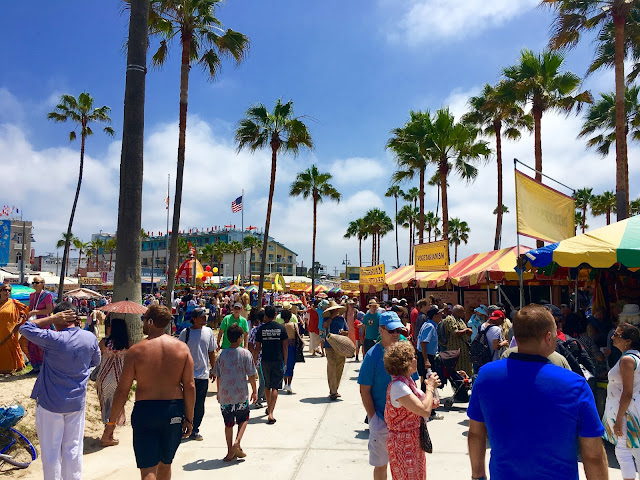 Giant crowds lined up to get plates of vegan dishes (I see they've added Hawaiian shaved ice and cheese pizza to the mix now days so parents can get their kids to partake, I assume), watch the dancers, listen to the music, get faces and hands henna painted, , look at all the gorgeous saris and costumes, shop for similar stuff from India in the pop-up Govinda's store, and/or partake in the many workshops and speaker tents filling you in on what exactly this group of people believe. It's always felt a little cult-y to me, but I can't really be mad at any religion that is spreading the love like this, and in such a fun way. 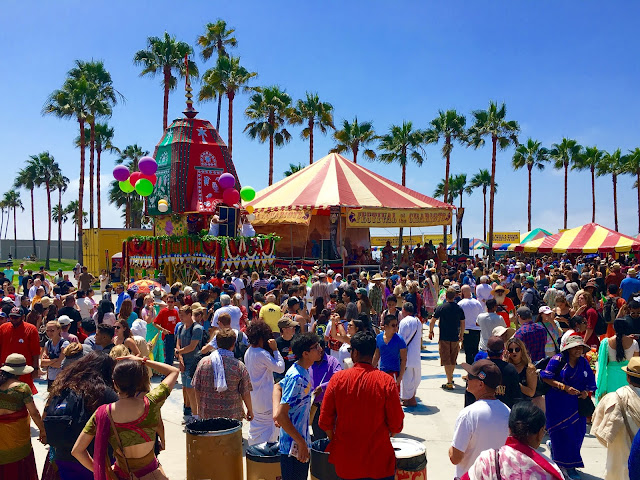 There was much to do and see, but then, there always is in Venice. I had an important bloody mary meeting at The Townhouse I had to keep, and another, even more pressing engagement on the sand and in the sea (my Sunday worship) that was crucial that I get to in a timely fashion (and then a stint at Hinano's to make it a perfect Sunday in Venice!), so I had to leave the Hare Krishnas to it, and thank them for another excellent celebration in the heart of Venice.