I LOVE supercool P.J. Harvey, but haven't seen her play since the '90's. That changed last night when she played at the Shrine Auditorium in Los Angeles. The big armor-style building was packed to the rafters with Harvey's faithful. I believe we ARE the faithful because Harvey has never flinched at using her voice and her platform to comment on the global problems that face us all, and shine her aural spotlight right in our faces to help us see, through hearing. There are so few artists of this level doing that today that Harvey's music is even more appreciated now than ever. 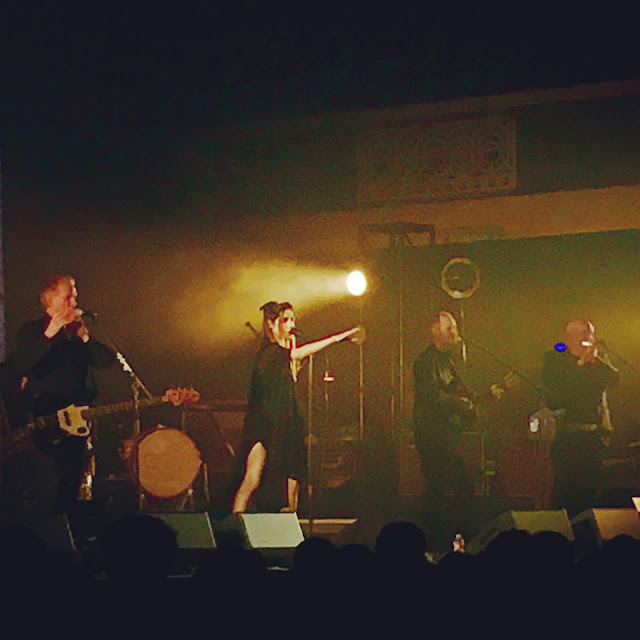 Harvey's  huge male band took the stage in a sort of marching band fashion, banging drums and filling the dark monochromatic stage with all of their instruments. When Harvey herself came out, the place exploded with cheers, as most of us hadn't seen her play in a long time - because she hasn't had many gigs. This is not a woman or a band that is ever going to be singing about dudes doing her wrong or what they're wearing to the party. This is music about REAL life, REAL issues, REAL talk. They focused the first half of the show playing mostly the heavy and pointed selections from her excellent most recent album. The Hope Six Demolition Project, all songs full of serious and legit social commentary that is SORELY needed right now.

They blazed through "Chain Of Keys", "The Ministry Of Defence", "The Community Of Hope" (also the best t-shirt at the merch table), "The Orange Monkey", and the American scolding "Dollar, Dollar", with Harvey regaling us all with her alto sax skills in lieu of her guitar this time out. There was almost no stage banter, which seemed right, because it would almost take you out of the artistic spell that Harvey and her incredible band of musicians (including the wonderful Alain Johannes, another Desert Sessions alum). My friend called it "Art Rock", and he was exactly right. It felt like watching a work of art come to life, which is apt, as the album was recorded as a museum exhibit. I told you Harvey was cool.

It was all so mesmerizing that I wasn't really taking notes, I just let myself be immersed by it. The second half of the show was made up more of Harvey's older (and awesome) material, like "50 Foot Queenie", "Let England Shake", and "The Glorious Land". It was actually kind of embarrassing as an audience to have the biggest applause erupt for "Down By The Water", as it's her biggest radio hit, and for sure her most obvious song, so it made everyone seem pretty mainstream, as it always does. When they began (my favorite oldie) "To Bring You My Love", the stage began to rise, elevating the entire band, and allowing the people in the back to see something too (the sight lines leave something to be desired at The Shrine). It felt important. 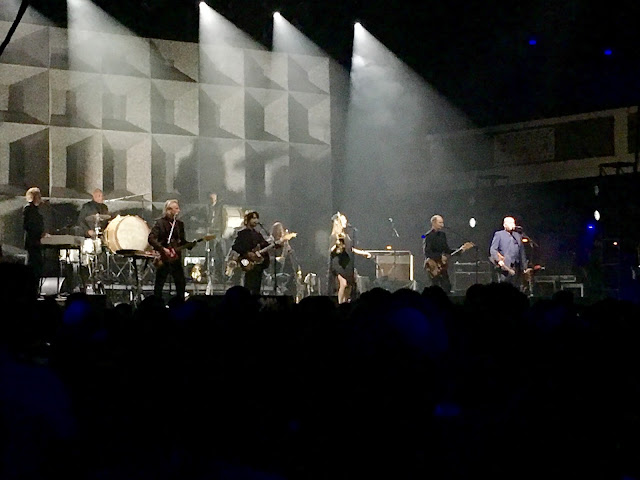 The entire room was made up of an extra diverse crowd, but by the end of the regular set, Harvey held each of us rapt. They returned for an encore of "Near The Memorials To Vietnam And Lincoln" from the new album, and "Working For The Man". Then that was it, but we all wanted much more, as all the best shows leave you feeling. It also left me feeling that Community Of Hope that Harvey sings about. Like minded people coming together to listen to very important music and lyrics about our current social conditions, that instead of feeling defeated and hopeLESS, left invigorated and thinking that maybe we can do something about all of it after all. I had just read an article the day before that said that attending live music shows is an actual health benefit. It uplifts you. Every time. It certainly did that for all of us gathered together to listen to P.J. Harvey, and when she sang I believe we have a future to do something good from "A Line In The Sand", I really HEARD her. And intend to do everything I can to do exactly that.

Thank you for your art, Polly Jean Harvey. You are one of a kind.

*P.J. Harvey also plays tonight at The Fonda in Hollywood - get there if you can!