I finally got the chance to see Venice legend Maureen Cotter's one woman show at Beyond Baroque on Saturday night, and now I know why it's such an eagerly anticipated event each year. This was Cotter's 12th Annual show, and the "Deviant Diva" was in fine form for her dozenth solo gig. 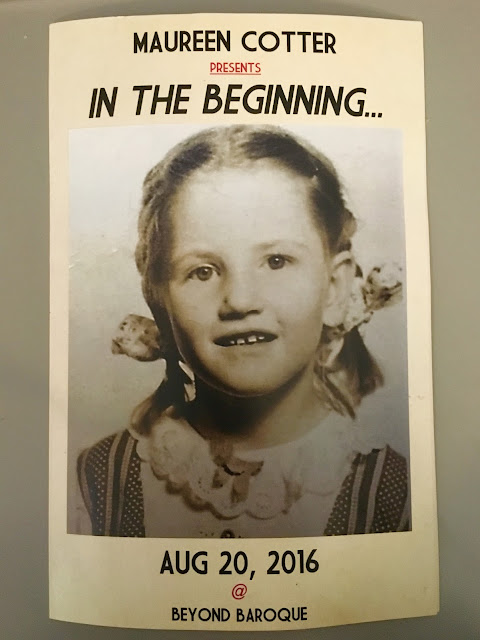 I was told to arrive early to enjoy the pre-party in the backyard of Beyond Baroque, and by the time I got there the party was in full swing. Packed with Venetians, all clearly thrilled to be there, especially me. Everyone told me - after expressing disbelief that this was my first Mo Show - that I was in for a treat. Past tales have been told about Cotter's time as a prison guard, a marijuana advocate, an out and proud lesbian, and a longtime member of the Venice Community.  This night's program was to feature stories from her childhood in Massachusetts ... where it all began. 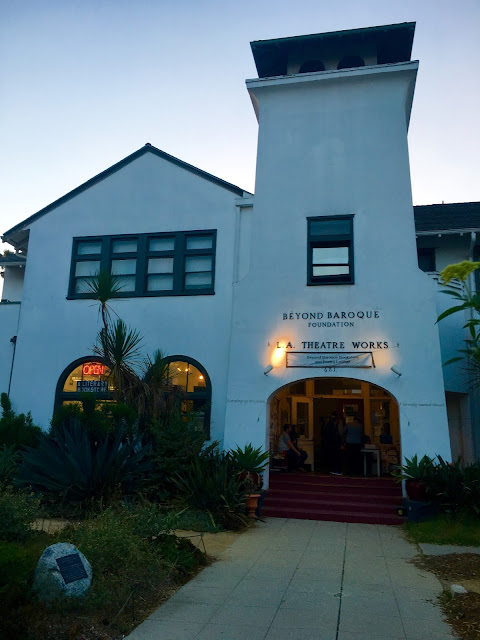 Everyone was in fine spirits, as they enjoyed the spirits being poured by Head Bartender (and Cotter BFF), Karen Rosenhoover, and her excellent staff of Barrettes. People were PARTYING - all the better to laugh along once the show began. All the seats were reserved, and the spillover audience members enjoyed the show out back, where the party continued. 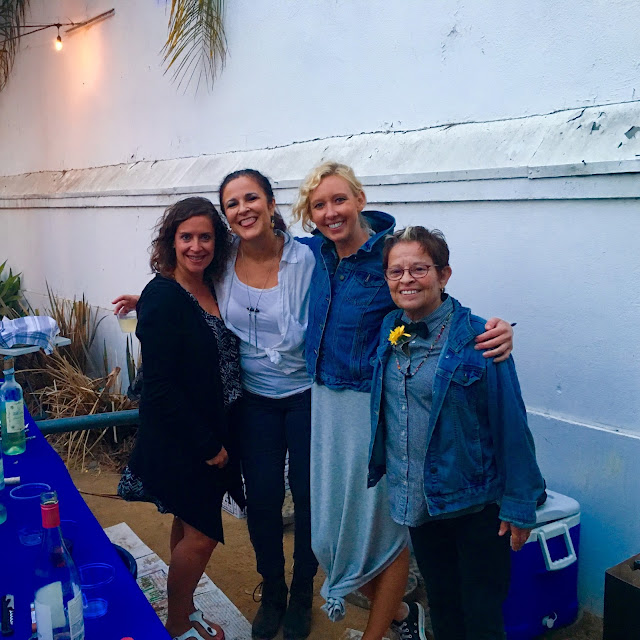 There was food, along with the drink, and it all had the vibe of a big family picnic. After catching up with all the friends in the crowd (this is a very OG event, with several attendees having lived in Venice for decades), it was time to file inside and be regaled with adventures from the life of one of our town's most interesting characters. 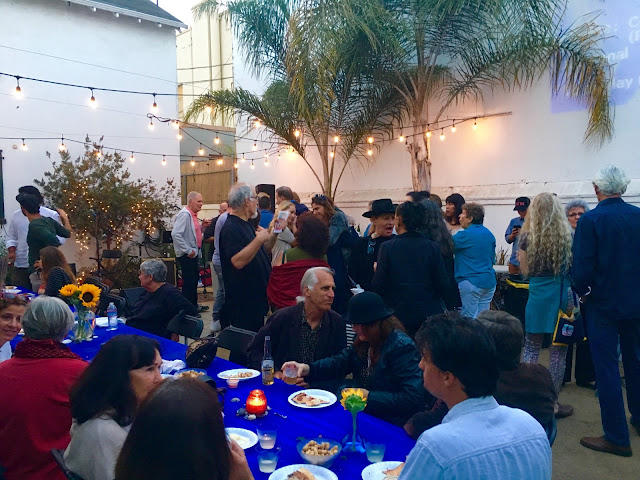 Suzy Williams, Brad Kay, Sam Clay, and Eric Ahlberg entertained the crowd with a song about "Maureen Cotter" to kick things off, and remained side-stage throughout the program to interject sound effects and musical asides to give it all those extra flourishes. 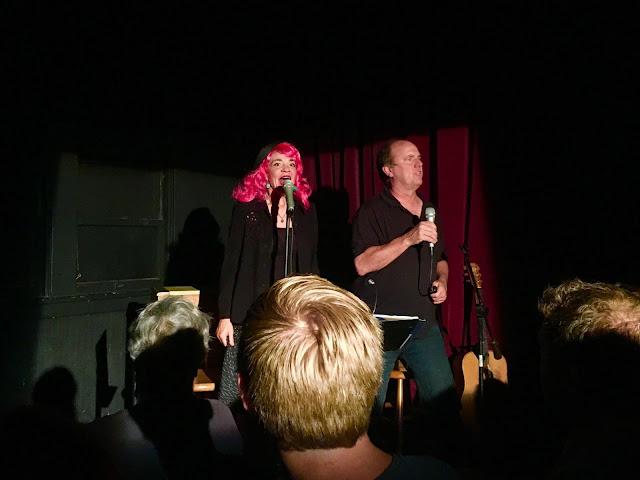 Cotter is a first-rate raconteuse, and her ribald, unflinching memories held the room transfixed - and in stitches - from the first word to the last. When Cotter was introduced (after we were instructed that we could indeed drink in the auditorium), the applause was so thunderous that Cotter said, "Don't make me cry, thank you all so much for coming to my 12th show at Beyond Baroque!" - and it was on. "My life is based on a true story ...", Cotter began, and took us back to 1943 Lawrence, MA, where she was born at - no coincidence - at 4:20 a.m. Seriously.  "I believe in pre-destination", adding that being born at that time and being held by Nurse Betty With The Big Breasts in hospital were the factors that set her off in her life as a "Stoner Lesbian". Also, her time stuck behind bars in her crib directly led to her time working in prisons - of course.

Slides accentuated the stories to fine comic effect, as when Cotter told the story about being obsessed with Santa - and then seeing the photo of her finally meeting the Man. Classic. As were the recollections of being chased by the 19 redheaded Scott kids that lived in the neighborhood and terrorized everyone. Every town has their bully kids, but these ones took the cake, probably because there were so many of them! Cotter and her brother, Jackie, were friends and companions as kids, and he got her to go along with a lot of his capers, like the one that got them into their first big trouble. 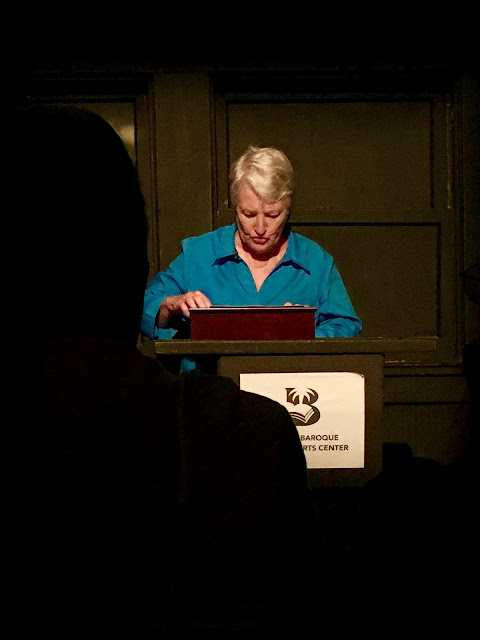 Third grade was time to start smoking cigarettes, according to Jackie, and he got young Mo to join him on a trip to Bill's Market, where their Mother had a credit account. They acted very casual, telling Bill that it was fine with their Mom to get a carton of smokes and a gallon of chocolate ice cream. This would absolutely CEMENT their status as being cool with the other kids! The ruse was a success, and Jackie and Mo set out to round up all the other kids who wanted to be bad - "And you all know who you are!"

They all met up under the school bleachers, and each new kid that arrived got a pack of cigarettes and a spoon for ice cream. Cotter had a cig in each hand, feeling the new glow of cool and praise being showered on them by the other kids. Until the Fire Department came to investigate all the smoke coming from under the bleachers. Buzz kill. Their Mother made real sure that Cotter and brother Jackie got a job picking "fucking tomatoes" until they had all the money paid back to Bill's Market. "And that began my career as a liar and a thief."

There was a brief intermission to get refills and laugh some more outside, before returning to our seats to hear about Cotter's idea for an app that helps one find the G Spot, "Because men hate asking for directions ... I'd call it Pokemyspotmanandgo". The cheers of approval most likely reinforced this as a good business idea for Cotter. "That's why I love tonight, you're laughing with me, not at me! Right?" Cotter was most certainly correct there.

That Cotter was entertaining a whole big crows with the stories and adventures of her very interesting life is in and of itself a big deal for a young girl who was told that she could be a secretary, a wife, or a nun. That is, until a little girl she knew asked her, "Didn't you tell them that you were too gay for those choices?" Out of the mouths of babes ... 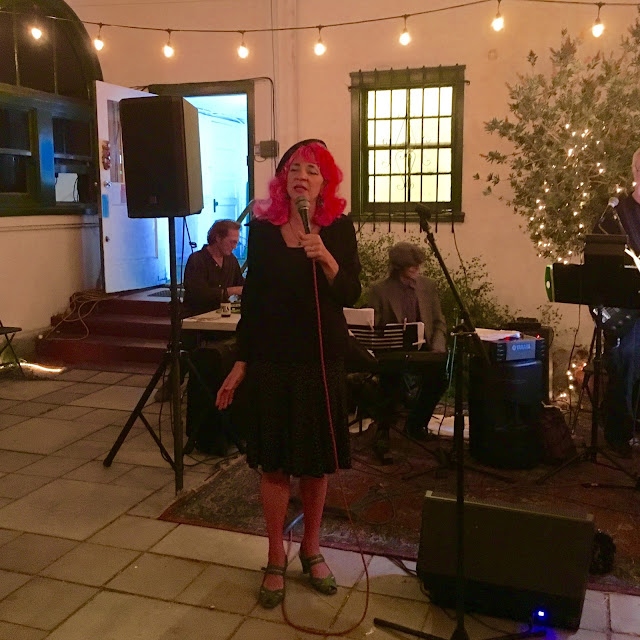 After the aforementioned (and hilarious) story about her friendship with Santa, it was over already, leaving everyone wanting more. Cotter closed by saying, "Be good to others, what's wrong with that?" Exactly nothing is wrong with that, and we all sang along to "Do You Believe In Magic?" as we filed out to continue the party out back.

Suzy Williams and The Nicknamers played for us, as the beer and wine continued to flow. All of us just felt lucky to be there, I think, on a night that celebrated the life and times of one of our most fascinating elder stateswomen, Maureen Cotter. 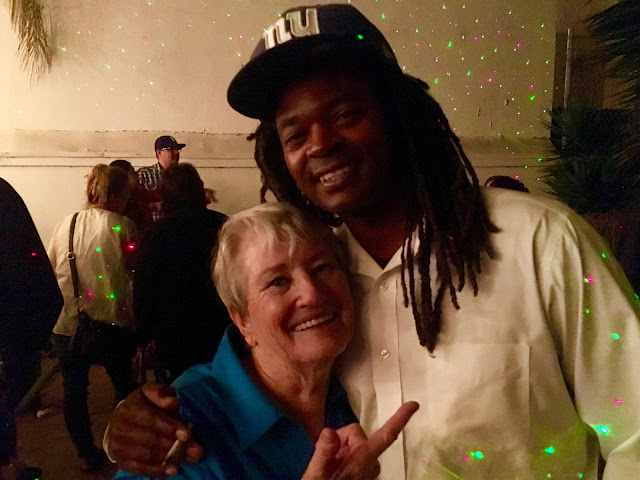 We had the run of the joint until midnight, so people sang and danced under the stars until the fun was all gone. As people said their reluctant goodbyes, it was actually fine, because the spirit of Venice is alive and well. And we knew that we'd be doing it again next year.

Thank you to Maureen Cotter for sharing your extraordinary life with us all, and to everyone who helps her to make it happen each year. You're all Venice treasures.