Ben Harper Live With The L.A. Philharmonic At The Hollywood Bowl!

Ben Harper and The Innocent Criminals played with the L.A. Philharmonic for the first time ever at the Hollywood Bowl on Friday night, and it was nothing short of breathtaking. It was the perfect Summer evening under a full moon, and the crowd gathered together at the Bowl was in a fantastic mood. For good reason. Harper has reunited with the Innocent Criminals - a great thing - but this time they had about 50 more in their posse, as the Orchestra players joined the band for this one special night. 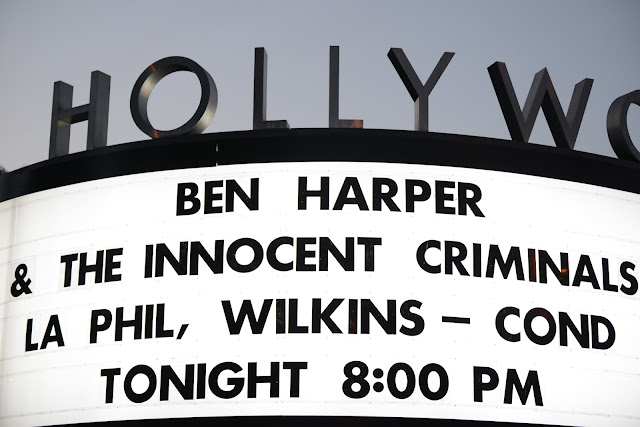 There was an air of anticipation and excitement above it all, as people knew this was historic, that Harper had never played with a full orchestra before - and in his hometown - so the also historic venue was full of family, friends, and longtime fans. The buzz grew as the seats filled with picnickers and the sun set as the moon rose. 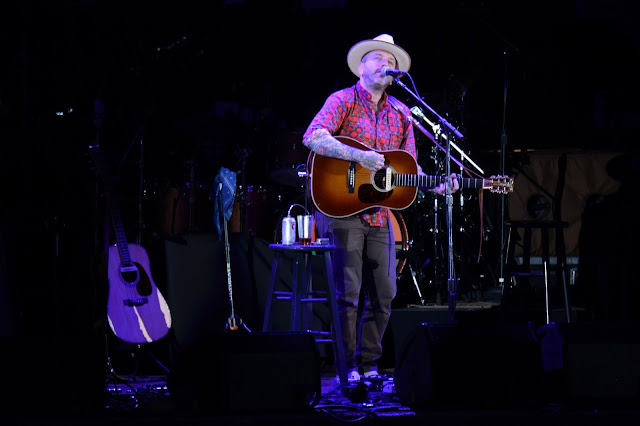 The opening act was City and Colour (aka Dallas Green), with a solo acoustic set. He (and it's just a lone guy ala the trend of guys naming themselves a couple of things, like Iron and Wine) was an interesting choice to open, as it was pretty mellow. I'm comparing it to the utter disco inferno of Harper's openers the last time at the Bowl (Fitz & The Tantrums), who really got the night going. Green's slow songs mostly about death were not nearly as invigorating, but that didn't stop several gals from shouting, "I love you, Dallas!" throughout his set, putting us all at ease that Green is indeed loved. Or was loved, as the rest of his songs were about lost love. "Just keep your negative tweets to a minimum," Green implored, and I'm sure that worked out, because after he closed with his popular "Lover Come Back" song, he had certainly created a bunch more new fans. Green left the stage saying, "Thank you to Ben ... You're in for one hell of a night!" Yessss. 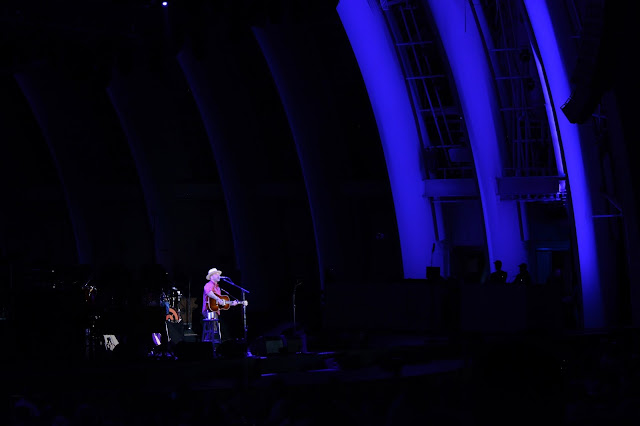 A brief intermission (soundtracked by Nick Drake) followed, where people poured more wine and stretched. I also noticed a lot more grey heads in the crowd. Grey heads getting coffees for the show. Harper has been playing his multi-genre music for decades now, and his ardent fans have now grown up with him and are sharing his music with their families. It was very much a family affair.

Harper and his original Innocent Criminals took the stage kind of subtly, other than the spiffy suits they wore for the occasion. They got right down to business with a fiery version of "Fight For Your Mind" that featured a guitar and bass battle between Harper and crowd favorite, bassist Juan Nelson. Nelson SHREDDED his bass apart, and Harper graciously cried "Uncle" before the song merged into Buddy Miles' "Them Changes" with Nelson on vocals. The gauntlet was thrown even before the notes of the first song had died out ... and the Orchestra hadn't even shown up yet! 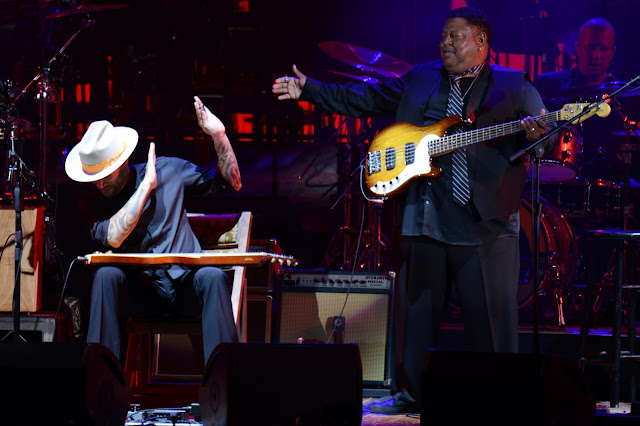 "Thank you! It's a privilege to be here with you tonight!", shouted Harper over the roaring applause. They went right into the very Rastafari number "Finding Our Way" from the latest BHIC album Call It What It Is. The Bowl was lit up in reggae red, green, and yellow as Harper tipped his hat to Bob Marley with a snippet of "Trenchtown Rock" woven in for good measure. "One good thing about music is when it hits you feel no pain!", Harper sang as we all for sure felt absolutely no pain, because this night was already ruling. Harper must have thought so too, as he looked around seemingly in awe of it all.  He name checked a bunch of Inland Empire towns ("Claremont! Cucamonga!") and added, "Your boy made good." Indeed, he did. And when the band lit into the dreamy "Into The Colors", everyone let him know with their whistles, cheers, and yes, "I love you, Bens!" 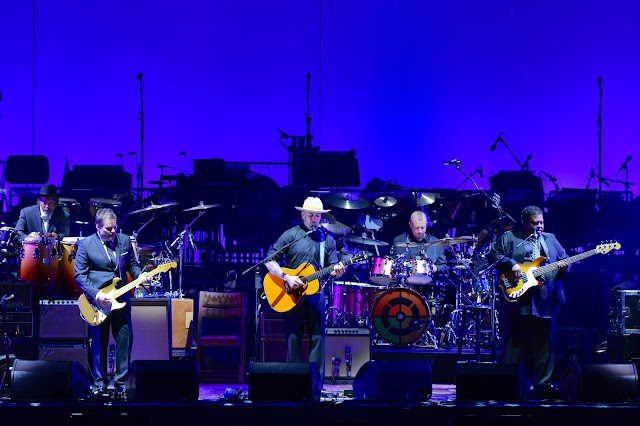 That one was utterly lovely, and then the entire Bowl sang "Happy Birthday" to guitarist, Relentless 7 hold-over, Jason Mozersky, as a roadie brought out a cake for him to quickly blow candles out on before they went into "Shine", the new one with the catchy, "If you were all I had, I would have it all" chorus. 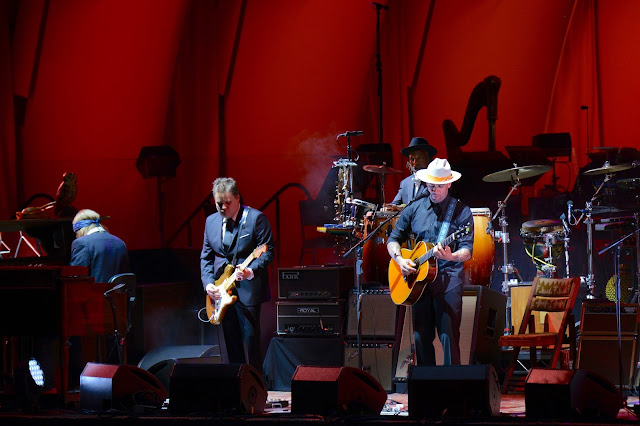 People loved it, but you could tell they were not yet as familiar with it as the ones like "Welcome To The Cruel World" that came next. People roared to hear the opening chords on Harper's signature Weissenborn of a song that is over 20 years old now - and as great as ever. 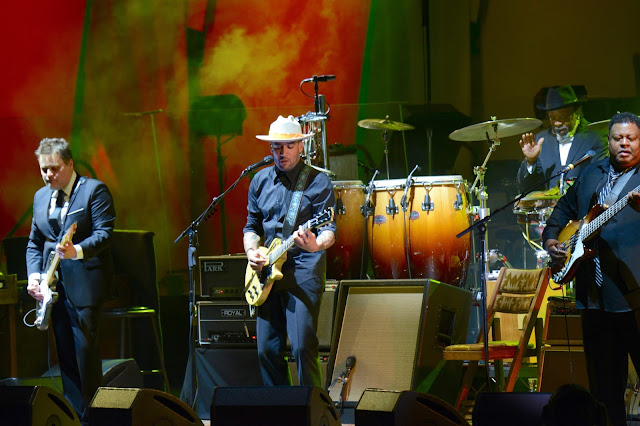 The night would only get greater from there, as Harper brought out L.A. Philharmonic conductor, Thomas Wilkins, to introduce the orchestra. "Good evening, Brother!" said Wilkins as he gave Harper a bear hug, in what is clearly a friendship based on mutual admiration. Wilkins said he'd been to Harper's family music store in Claremont and was "like a kid in a candy store" as they are both "instrument geeks". Wilkins asked Harper at what age he switched over to the Weissenborn, and Harper answered that he never switched, "That's where I started." As the musicians filed onstage, Wilkins asked when was the last time Harper had something like this behind him, to which Harper replied, "I've NEVER had something like this behind me before!" - letting us all know that we were in for something extra special. 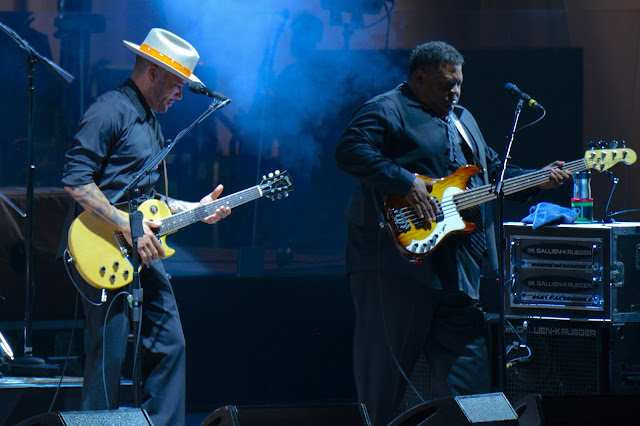 The orchestra began tuning, and Wilkins said, "This is my favorite sound, because it means it's time to rock and roll!" It sure was. Harper turned around, taking it all in, and said, "That's a lot of Innocent Criminals, huh?!" The extra Criminals were dressed in white, setting them apart, if their clarinets, harps, horns, and strings didn't already do that. They began with the title track from the new album, the very heavy, social justice track "Call It What It Is (Murder)" that calls out murdering police officers to their faces. It had an extra weight with the orchestra playing behind it, and the band was TIGHT (which seems miraculous when you know how little practice there must have been with how much Harper tours). It felt important - and it is. 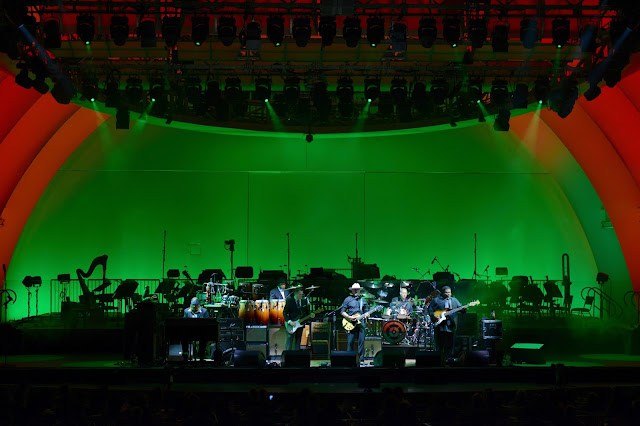 "Amen, Omen" with its majestic, soaring strings brought me to tears for the first time of the night - but it would not be the last. There's just something about symphonic music that touches my heart directly, and when it's being played over some of the most lovely, heartfelt lyrics ever, you just better have brought some tissue along. I wasn't alone either, I saw people dabbing their eyes - male and female - plenty on that one. The strings section was really showing off throughout, in fact, as they wove their magic through "Forgiven" next, and the whole thing was so gorgeous that Harper would turn around to listen to them during his lyrical rests. It was truly something else.

As was "Power Of The Gospel". First of all, for any act known mainly for rock and blues to come up with this beautiful gospel hymn to above and sing it so raw and meaningfully is pretty dang rare, but then to have it be accompanied by an orchestra of this stature, it really was a religious experience. Complete with the requisite guy yelling out, "Take us to Church, Ben!" He did, and he sang his heart out while doing it - taking off his hat out of respect while doing so. Wow. Just wow. 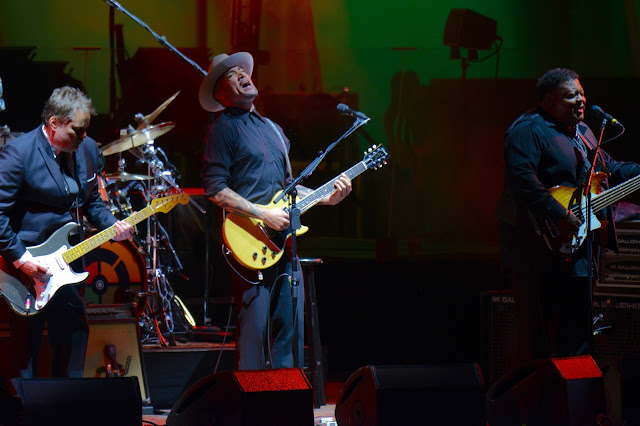 The crushingly beautiful instrumental "All My Heart Can Take" was next, and Harper turned his chair around to play his Weissenborn facing the orchestra. It was completely silent in the Bowl, save for the chirp of crickets in the surrounding hillside. The music began slow and lilting until building to a crescendo that was again so sublime I felt the tears sting my eyes and my chest tighten. The entire audience was transfixed, and transported up into the stars, where we were more than happy to stay. I'd rewind this part of the night over and over if it was taped, and in my mind, it was. I'm back there
now, in fact ...

'K, I'm back. And so was the show, with "Roses From My Friends", and then one of my favorites, "When She Believes". The song has always made me feel like I'm at an outdoor café in Paris, but now with its added strings and harp and all the glorious rest, it was elevated into something from a real symphony. When Harper sang the line, "Now I have heard a hundred violins crying", he turned and gestured to the orchestra with a big smile that let us know he was as thrilled as we were. He looked so happy that it was impossible to not feel as happy for him. He shared at song's end that he had written that song in 1998 for his daughter Harris on the occasion of him feeling like she believed in him to take care of her. There was very little stage banter as there was a strict curfew to adhere to, so it was nice to hear that little back story. 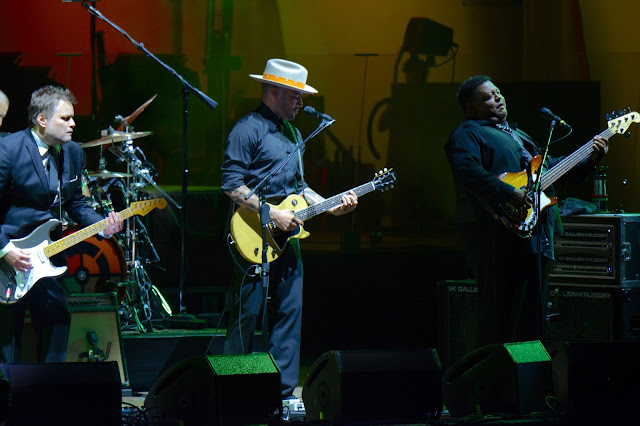 "Goodbye To You" featured a gorgeous, lush arrangement (all written by David Campbell in collaboration with Harper) that just made you want the night to never end. That's when Harper told us about how he too goes to shows, and just saw Radiohead at Outsidelands, and wanted them to play the hits, so he understands. "Burn One Down, Kisses, I know, I know! See you tomorrow in Santa Barbara!" - meaning that wasn't happening on this night, in this setting, with this orchestra. Exactly no one was mad at that. 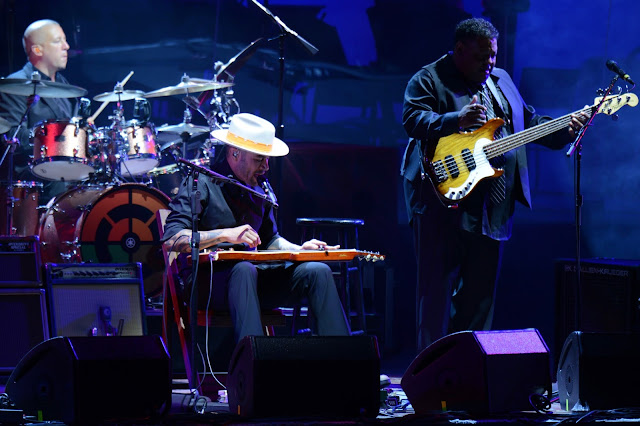 You'd think it couldn't get better, but then they threw down, "How Dark Is Gone" and it was SO. GOOD. This one has a kind of Spaghetti Western soundtrack feel to it, and as such, feels automatically epic. Percussionist Leon Mobley was going OFF, and Harper joined him by shaking maracas while singing, as the rest of the band/orchestra made the whole thing simply SOAR. Looking around, all you saw were joyous, rapturous faces enjoying themselves to the fullest. Hit with music, and feeling no pain. Perfect.

Conductor Wilkins came down off his platform and held hands aloft with Harper, as they thanked each other and the audience for what had just been pulled off. There was no time for the usual make-'em-wait-for-an-encore, so they lit right into Harper's anthemic, "Better Way" - a song full of truth and passion that is perfect for these crazy times we're living in - even though it was written ten years ago. It's one of my favorites, and Harper pours every ounce of himself into it, every time. 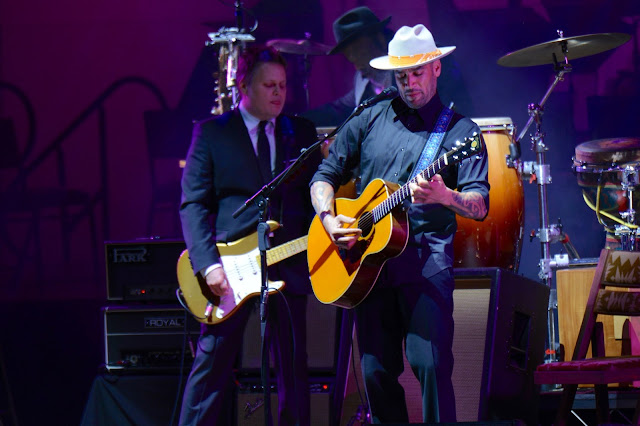 If you were at that show, you know that we can do more than BELIEVE in a better way, we can DO something about it. That might mean going to a show like this and getting inspired, because so many people feel the same way you do. That might mean having that song get stuck in your head as you hum it to yourself on your commute, remembering Friday's incredible show. And hopefully that might mean that you start thinking of ways you can help to make sure that a better way is being implemented in your life, because every individual effort at making things better affects the whole. So, LET yourself be hit with the music. It truly matters.

Thank you to Ben Harper, The Innocent Criminals, The L.A. Philharmonic, Thomas Wilkins, David Campbell, and the wonderful Hollywood Bowl for giving us this magical night of music that no one there will ever forget.