"If your house doesn't have glitter all over, you didn't have as fun a weekend as we did!" - So read this morning's Facebook status of Miss Jessica Sugar Long, founder of the Venice Mardi Gras Parade and celebration, and boy, was she right. I have glitter everywhere still (including my scalp where it refuses to wash out), having been "anointed" by the King of Venice Mardi Gras, Matt Tyler, and his Queen, Anna Metcalf. Anointed meant closing your eyes and having King Matt pour glitter all over your face and body. It looks awesome ... Still. 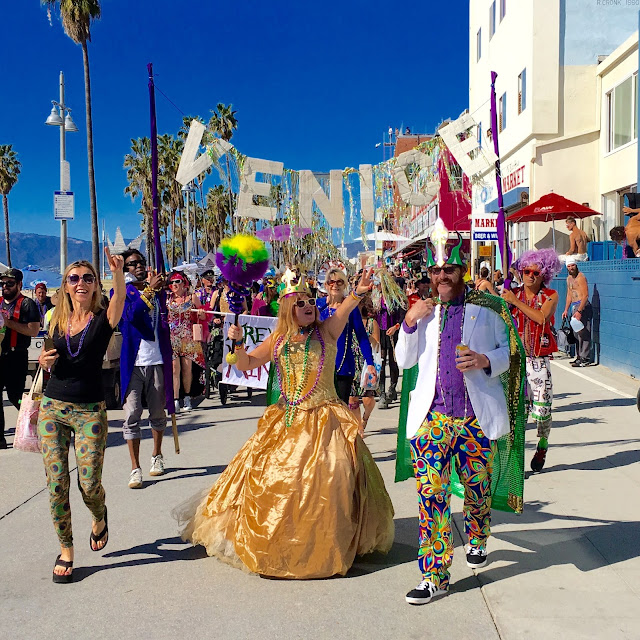 Saturday could not have been more gorgeous out, the absolutely perfect day to march down the Boardwalk, tooting our own horns. Blue skies and mid-80's were the reward for the Venice masses gathered to display their sense of fun, artistry, and true spirit of Venice - via New Orleans. It was the first time (in its 15 years!) I've been able to take part in it all, and believe me, Venice, you don't want to miss it next year. So, so fun. So, so glittery! 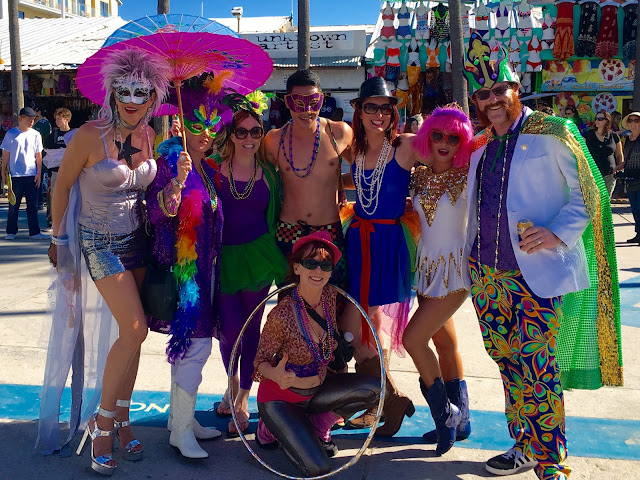 The Krewes gathered on Rose and Ocean Front Walk, with the brass band and drum line falling in behind the Venice sign and the King and Queen leading the parade down the Boardwalk to the delight of surprised tourists and seasoned locals alike. 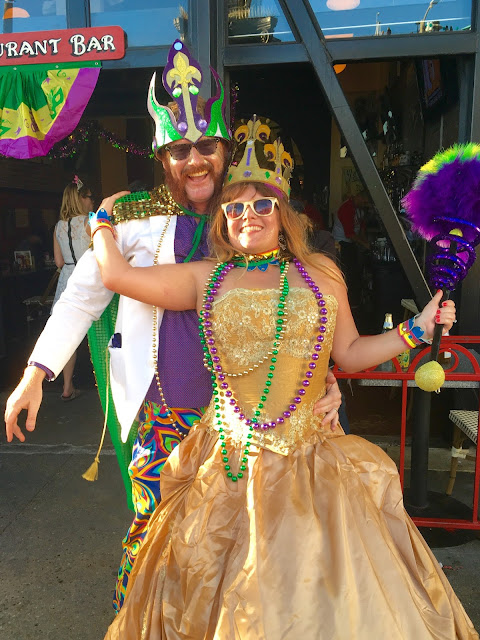 The Windward Krewe was well represented by costumed Venetians that are all a total blast, and the Kinney Krewe was right there with them. Costumes were anything goes, from a David Bowie Starman tribute (on Miss Jessica, my favorite ensemble), to a two-headed monster to the traditional purple, green and gold of Mardi Gras regalia. No matter what you came up with, it was fun, as it always is to dress up crazy. 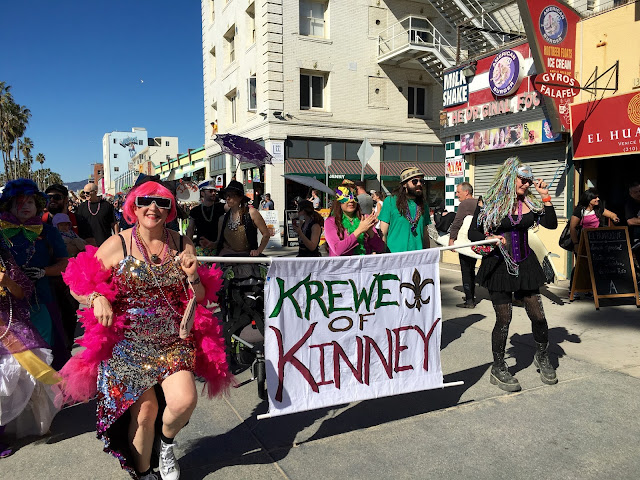 My favorite moment of the whole day was when a little boy (black) walked right up to a little girl (white) and placed a bunch of strands of Mardi Gras beads around her neck while she stood patiently, and then hugged him. Now THAT is what it's all about. It was beautiful and amongst all the mayhem and madness, I was profoundly moved by such a simple moment. So much so that I missed it with my camera, but this is them. Love. 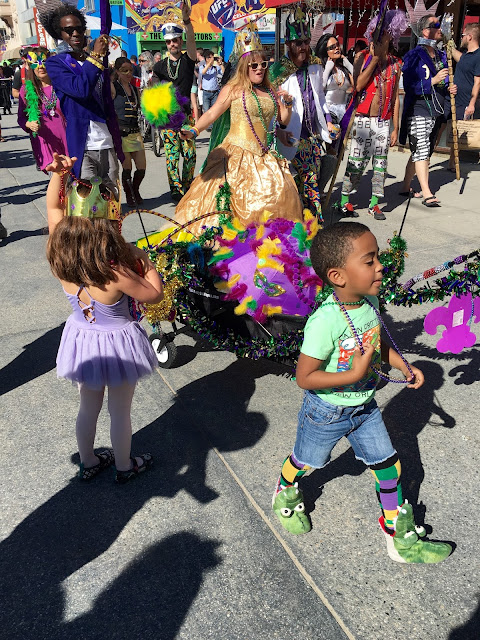 The only sign of El Niño raining on our parade was this guy - El Niño, apparently on a sunny vacation in Venice. Hilarious. 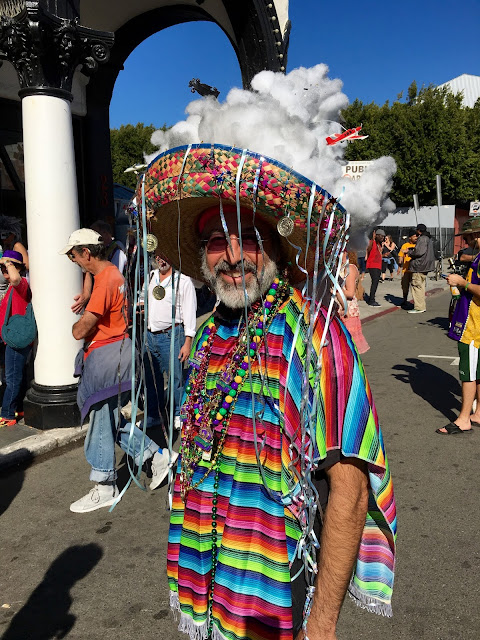 Gonzo Rock was there with his traveling drum machine, so anyone could walk on up and join in the banging as our joyous cacophony made its way down the very edge of Venice. 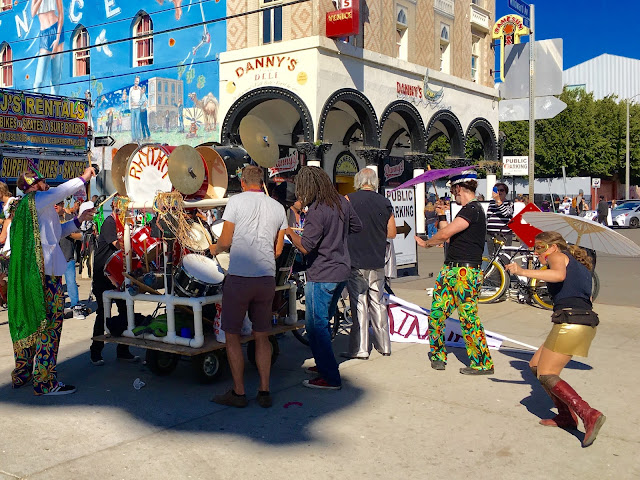 Music and shouts rang out to let one and all know that our Venice is HERE, our Venice is PROUD, and our Venice is super extra fun. All of which is contagious, once you join in and get it. What we're about, and always have been. Artistic expression and FUN. 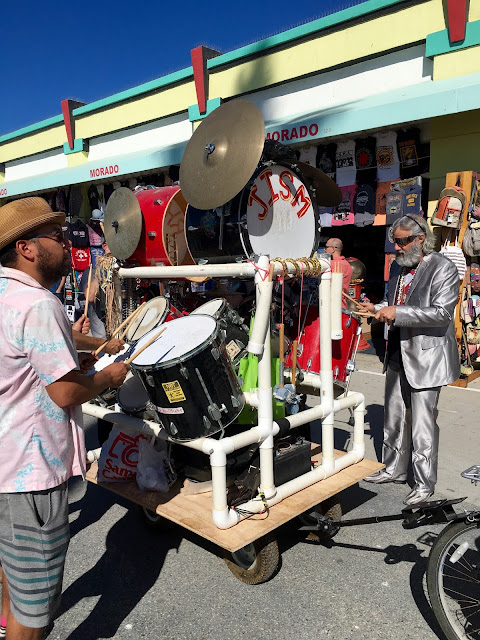 The group wound up in the Windward Plaza, dancing and blowing horns, singing and sharing hugs, people watching and picture taking ... in a word, CELEBRATING. 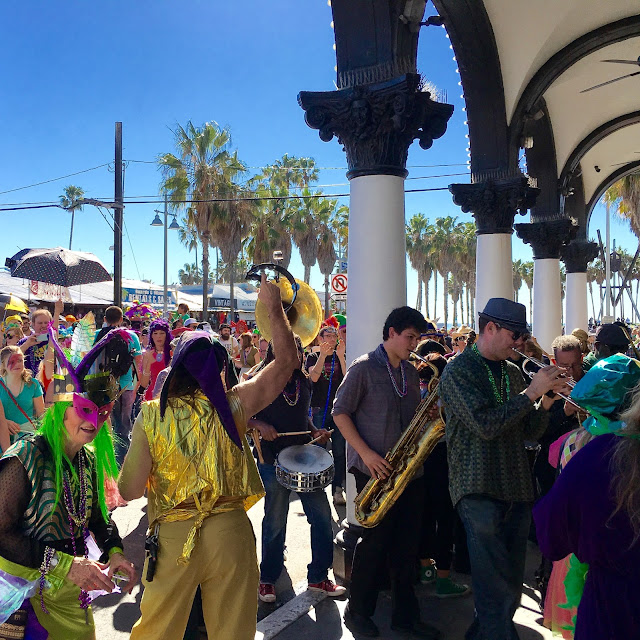 The band led everyone into Danny's Deli, where Venice Paparazzi had set up a photo booth with all the fun Mardi Gras accoutrements to deck yourself out in, while listening to the N'awlins sounds of The Gumbo Brothers. Miss Jessica took over the mic at one point and delivered a Bowie medley that all sang along to, lustily and with great appreciation. 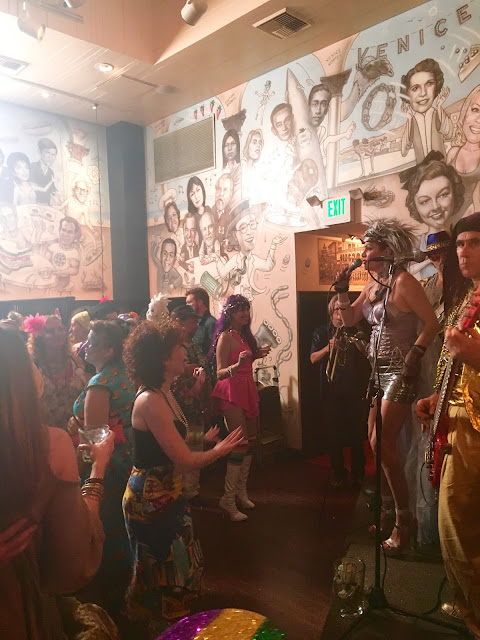 Danny's was real crazy and crowded, so we took a little break in the dark confines of The Townhouse (where Fish invented the Mardi Grapefruit - yum!), where soon we were joined by other Mardi Gras revelers with the same idea. Captain Todd Van Hoffman made a speech about how the spirit of Venice was clearly still very much alive ... and very sparkly. 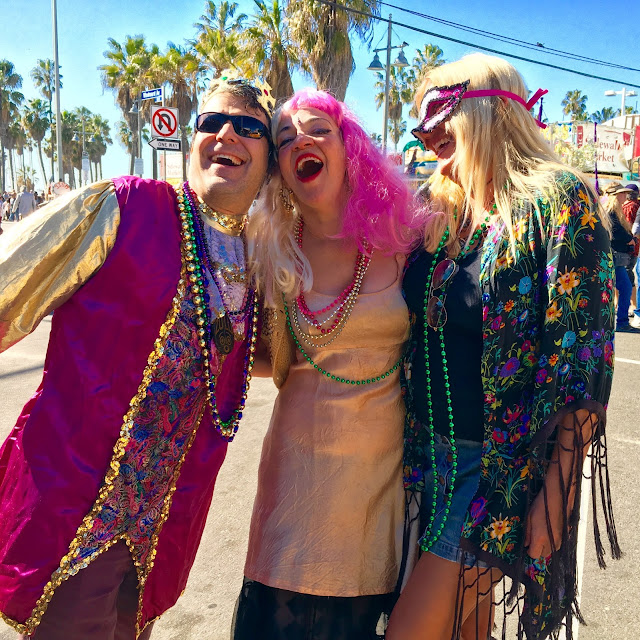 It was almost a call to arms speech, urging all that were there and participating in the fun to carry this feeling of community and something special around with us all over town, and to defend it with our voices and actions, however we can. It's crucial. (He also called me his "favorite Pinko", which I loved). Every word of it was true, and important. And reassuring too, as we realize that when we all come together, it's as if nothing in Venice has really changed at all. Phew!


What a great day for Venice it was, as we let the good times roll on down the Boardwalk, and into our hearts and memories forever ... Laissez les bon temps rouler!