Take A Class In Glass - With John Mooney

When I decided I wanted to tell stories about learning new things and cool classes you can take in and around Venice, one class led to another. When I spoke to Pamela Weir-Quiton about woodshop class, she connected me with John Mooney, who teaches classes in glass blowing right around the corner. And everyone needs to know how to blow glass, so off I went to meet with Mr. Mooney. 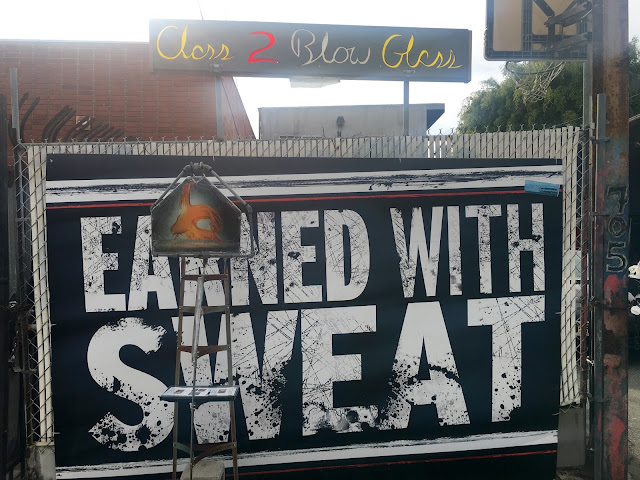 Mooney's "Hot Shop" (there is a lot of lingo in glass work),  "Cold Shop", Showroom, chill space, and your classroom are located all under one roof on Hampton Avenue, next to a body shop in a cool and still industrial feeling part of Venice. He's a groovy guy, with a surfer/scientist vibe, and a clear enthusiasm for working with glass that is infectious. 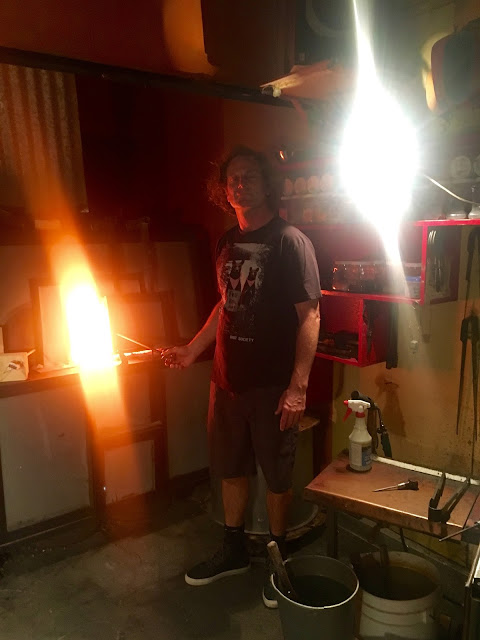 Mooney was born in California, and raised in Colorado until he went off to college at Pomona. He was always into art, but had a specific curiosity about glass blowing, and was on a wait list all four years of college to get into the glass blowing class offered at Pitzer College, where he finally got in, and was immediately addicted. Mooney figured he'd go to Seattle and get in with the glass studio movement up there, where Dale Chilhuly was blowing up the scene and taking it into their own studios versus working for a big glass place like Corning. It was art. "Glass is not a dying art, it's an exploding art, and it's pretty damn growing," explained Mooney when teaching me about this ancient ("They were blowing glass before Jesus!") art form. 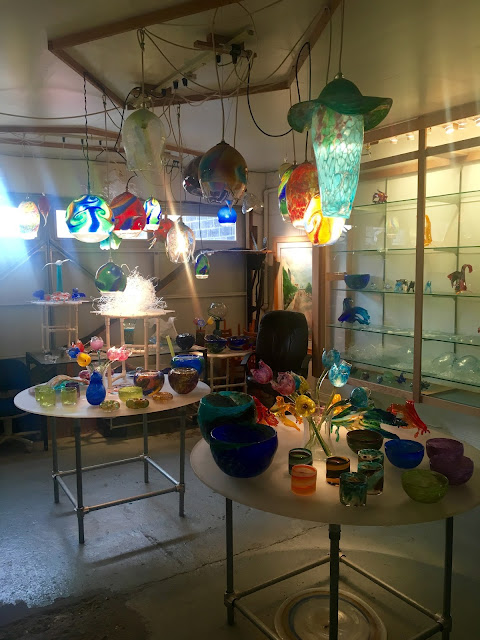 After Seattle and a stint working as a fisherman in Alaska, Mooney came down to Venice where glass artist Richard Silver needed an assistant in his studio. Mooney jumped at that, and learned and worked for Silver for the next ten years, honing his craft. "You learn to blow glass by doing it. It's a skill. The more you blow, the better," says Mooney ... and better he became, until it was time for him to open his own studio. In Venice. Where he continues to create beautiful glass pieces for galleries and for commissions, and had now opened his doors to share his craft. 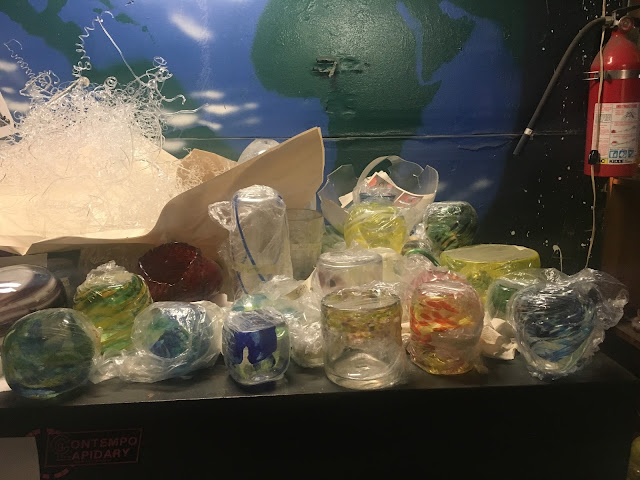 Mooney found his current space on Hampton in 1996, but it took him until 1999 to get the blazing furnace on, as there is much to build to have a glass studio, I soon learned. The furnace is on 24/7, and has currently been burning non-stop for four years! This is because is takes an entire week to heat up to the 2,100 or so degrees it needs to be to hold molten glass, and a full ten days to cool off. And time is money. This furnace is meant to last a lifetime ... or as long as Mooney can maintain having his cool studio in Venice before he too gets booted out for big, stupid condos (my speculation, not his), but so far, so good.

When faced with increasing rents, like all Venice artists, Mooney started thinking about how he could keep his furnace burning in Venice, and came up with classes. "Moonlight Glass" classes started in Mooney's studio in 2009, and he's been teaching them seven days a week ever since. Classes can be private for one or two people, you can come with small groups of four or five (any more and it gets tight in there, and this all takes time) for a birthday party or something, and have the best time, and also emerge with a new skill that you can use for a lifetime! Cool. 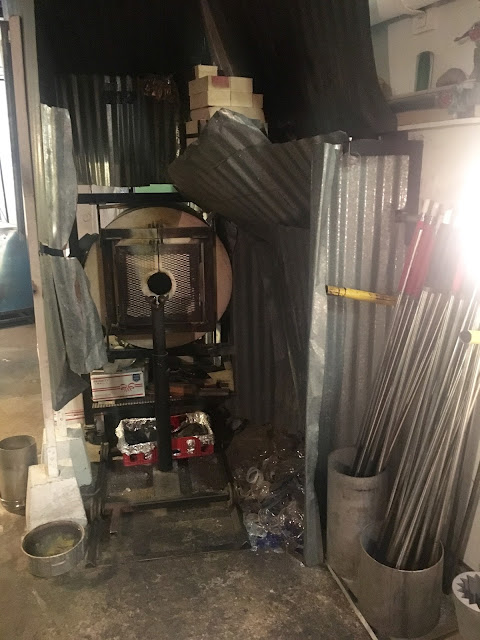 But it is not at all cool in the room where the furnace is, and where I learned about the "Glory Hole" (a place where the item you made goes in to begin being tempered. I think.) and the "Crucible" (the cauldron where the molten glass is kept), and where all the magic happens.

In your first class, "You're gonna learn the basics, and you're gonna go home with something cool," says Mooney, which means you're gonna make a bubble like paperweight and a glass to drink out of. How cool to make something glass for someone you love and tell them you blew it from sand lava into the glass they're drinking out of! Real cool. "It's kind of like a meditation too when you're blowing glass. You have to be absolutely present and have your mind on only this," explained Mooney while showing me his technique, and we can all use more of that. 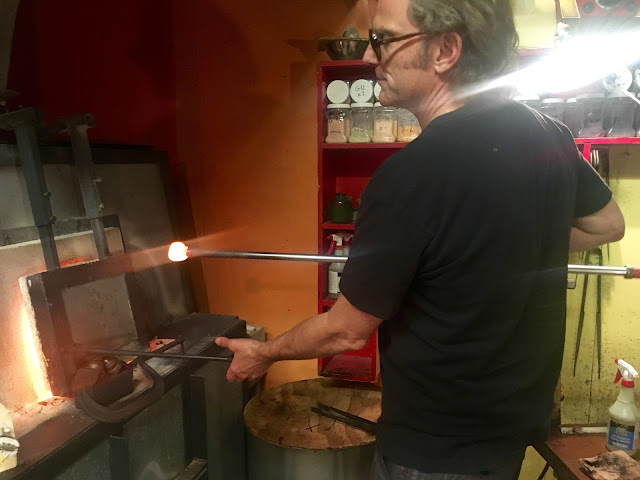 It's obvious that you need to be fully engaged, as you're working with actual lava, basically, and also whatever you're making can break in a second if you're not paying attention. As intense as that is, it's also really fun. "I've gotta have fun when I'm teaching you," Mooney laughed, "so it's fun."

We talked about our Venice, and the changes taking place, as you have to. "It's sad that tech companies are making it unaffordable to live at the beach ... when they wake up and realize what they moved to Venice for is gone, then they'll regret it. Art studios aren't meant be replaced with overpriced restaurants, but I have some optimism that they're trying to embrace the locals," said Mooney about what all has been going on. We're both hoping for this particular glass bubble to burst. "There's nothing high tech here," cracked Mooney as we looked around at the same tools that have been used in this craft since pretty much time began. 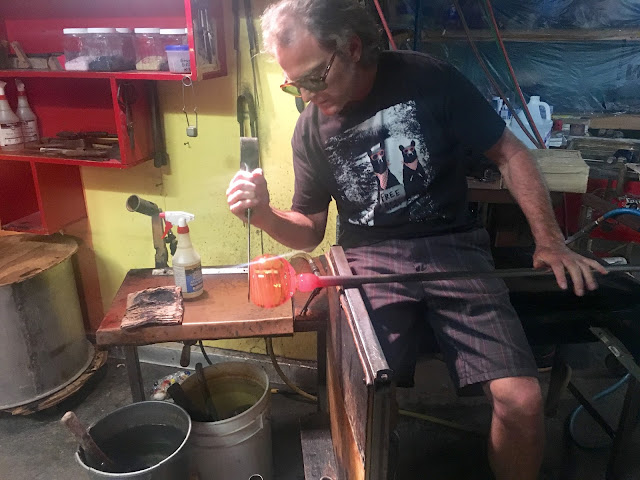 "I love what Venice has to offer ... the beach, the free nature of the People that have always lived here, meeting people living here at the edge of a Metropolis, the colors, the variety ... I love everything about Venice," Mooney said with a smile that you can only have if you live here. And know.

Carrying on about Venice, Mooney pointed out this source of pride: "Abbot Kinney loved Venice, Italy, and that's the best glass blowing in the world. I'm here in Venice, California doing this 100 years later. I get to share and learn now from my students, and we all improve each others' skills." I think Mr. Kinney would fully dig that. Keeping his dream alive! 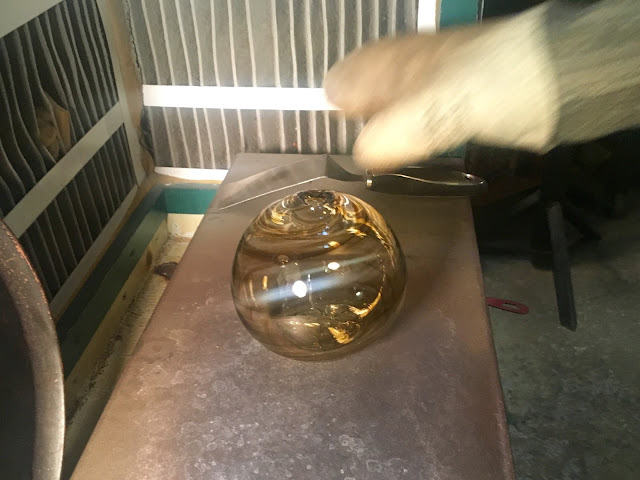 "It's an intimate experience blowing glass with people ... it takes all of your attention, you have to be fully committed and focused, so it's pretty Zen," Mooney told me about the classes, comparing it to yoga, meditation, or a really good lunch. "You're working with your hands, making something out of nothing but sand and heat (and tongs and pigment and all that, but you get it)."

What a cool afternoon, and what a cool opportunity for everyone to learn something brand new. You can get or give the gift of glass! (Yes, gift certificates are available). I'm excited for you.