Venice Graffstone - The Art and Jewelry Of Susan Rich

I've been trying to get together with Susan Rich for ages to talk about her supercool Venice Graffstone jewelry made from pieces of the Venice Art Walls (!), and we just finally had the chance to sit down and talk about it all. Rich was born in Vermont, and raised in Florida, with a stint in D.C. as a body builder (!) and 80's aerobics instructor (think leg warmers) and working at a credit union at the Pentagon, and all sorts of different adventures, before coming out west to attend Pepperdine. That was a springboard to get her to UCLA Film School, where she was top of her class, and soon working as a director's assistant. 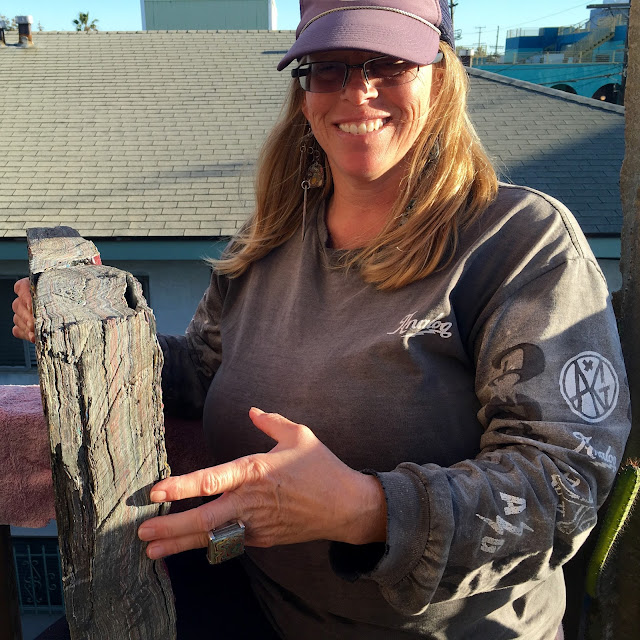 A boyfriend got her to move up North, but that wasn't happening, and he said he'd only move back down to L.A. if they moved to Venice (my kind of dude), so that is where Rich has been ever since - even though she did think it was sketchy at first. It was. She lives in the same historical apartment (that they're trying to officially make historical so greedy developers don't ever get their mitts on it) near Windward Circle (but not with the same dude). "Venice takes you over and has a story for you to live out," said Rich by way of introducing her own Venice tales ... which included being a nude live model, a Dominatrix, and a graffiti artist (her tag was a big "S"). 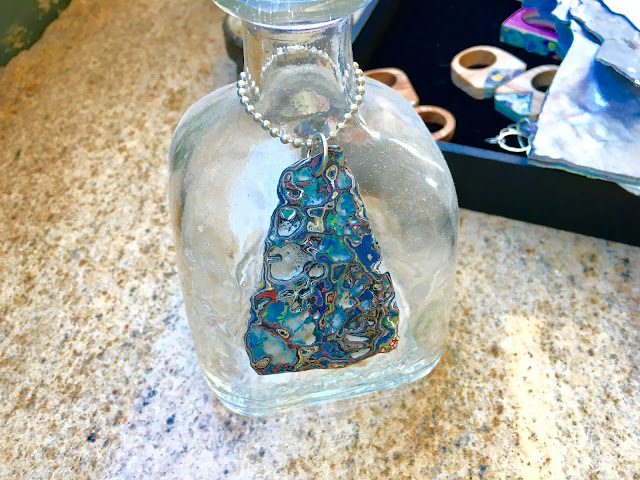 Once she started dating a graffiti artist, she began spending a whole lot of time down at the Venice Graffiti Walls at the beach. One day she turned the corner and saw all of this paint strata hanging off the ends, and had a light bulb moment. She could make graffiti art that was three dimensional - and permanent! Jewelry. Made from the years and years of paintings (an estimated 15,000 layers in one necklace!) done by artists from all over the world in the ultimate upcycling. A whole giant section had fallen off and was going to be tossed in a dumpster by the city ... unless ... 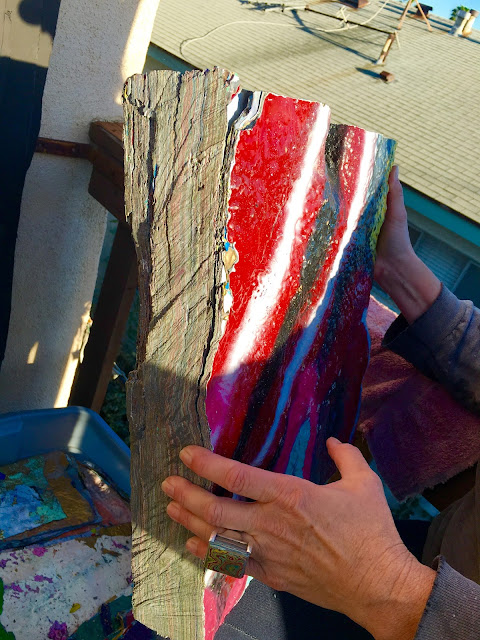 Rich took home some big chunks of fallen paint and began experimenting. She even flew to Chicago to learn from the woman that created "Fordite" - jewelry material made from the leftover paint in the automobile industry! The first piece she made was a "V" for Venice. Of course. She began making dog tags, and grew more excited every time she revealed some new, one of a kind pattern from all the swirls of paint. Rich often thinks of the person the piece is meant for as she's creating it, saying, "I'm a Shaman. They speak to me." (The Venice has definitely taken her over after her initial reluctance.) From the early dog tags, the line has grown to include necklaces, earrings, rings, and frameable art pieces. The rings are my favorite, because the setting that holds the graffstone is made from recycled skateboard decks! Now THAT is the ultimate Venice gift. Wearable art from the creative vortex and heart of our town. I love it. 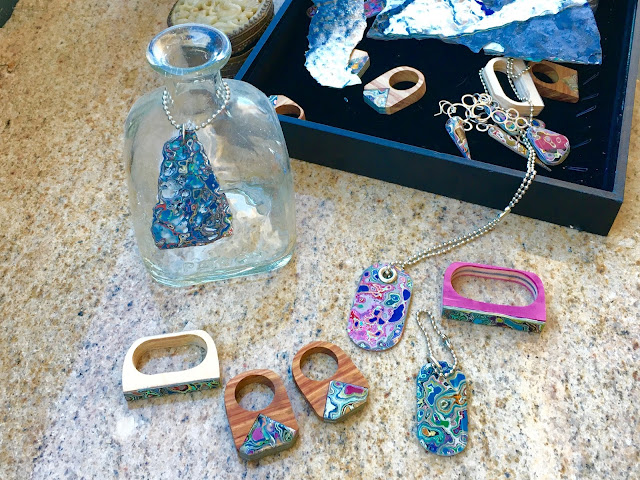 An organization called STP (Setting The Pace) currently maintains the Venice Art Walls, and Rich told me that their Bruno Hernandez and Stash Maleski of ICU (In Creative Unity) before him are the reasons that the walls are still there. There is a donation button on the STP site to help make sure that they are preserved as a place for free artistic expression, and Rich would also like to give back to the walls that she loves (and that provide her with materials) by seeing these jewelry pieces of hers help sustain the walls through their sales. 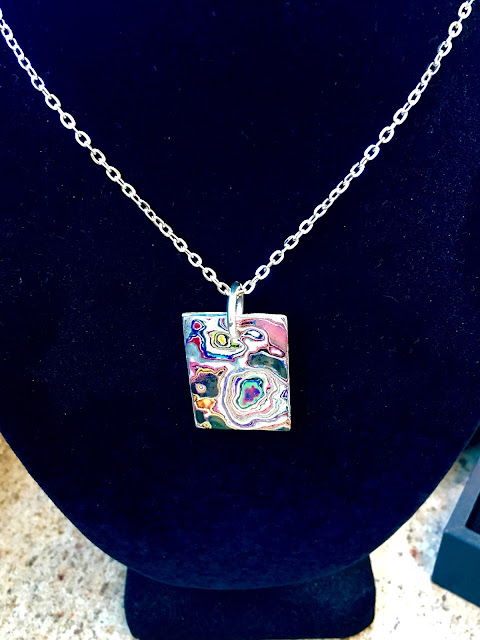 "It's Family," answered Rich when I asked her what Venice meant to her. "I felt like discovering this way to honor the walls was becoming one of the family, and I want to give back to the family." That's right. 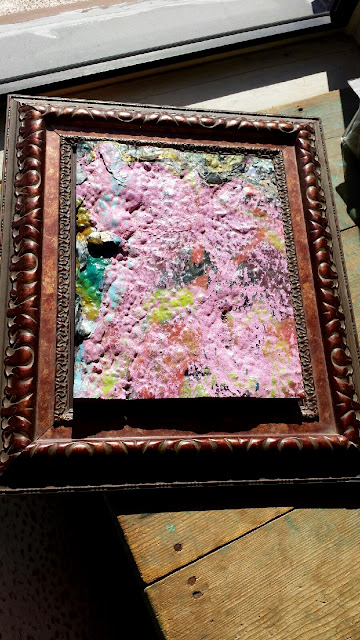 For now, you can help her do that by purchasing one of her one of a kind Venice treasures at Animal House, In Heroes We Trust, and Maui and Sons on Washington Boulevard. Venicegraffstone.com will soon go live, and then everyone everywhere can have their own little piece of Venice history. 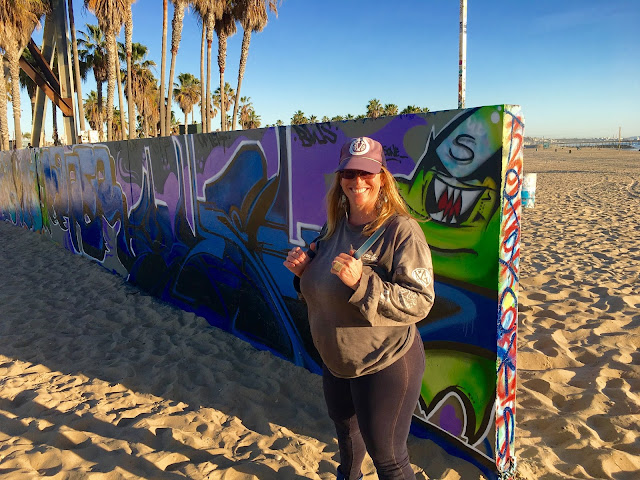 I asked Rich if she had anything to say to the people in closing, and she replied, "I don't have anything else to say that the walls don't say better." With that, we took a stroll down to the Art Walls right at golden hour, greeting old friends all along the way, and stopped to watch new art being created at the Walls ... where today's statement will be tomorrow's memory - perhaps around your neck.

Get your Venice Graffstone, and carry a piece of Venice with you for always.

Animal House
In Heroes We Trust
Maui & Sons - Washington Blvd.
Susan Rich if you see her around town!