It's a drag to be sick when you live in Venice because you know so much is going on outside without you. Last weekend found me almost all better, and that meant hitting the ground running to catch up on the multitude of stories that await being told in our new year, 2016! I have tons of story ideas, but when a new year begins, I think a lot of people are thinking about things to change, things to accomplish, and new things to learn. It's a nice mile marker in the calendar to see what all you soaked up in a year's time, so I got to thinking about classes and lessons of cool things and now they just keep springing up. 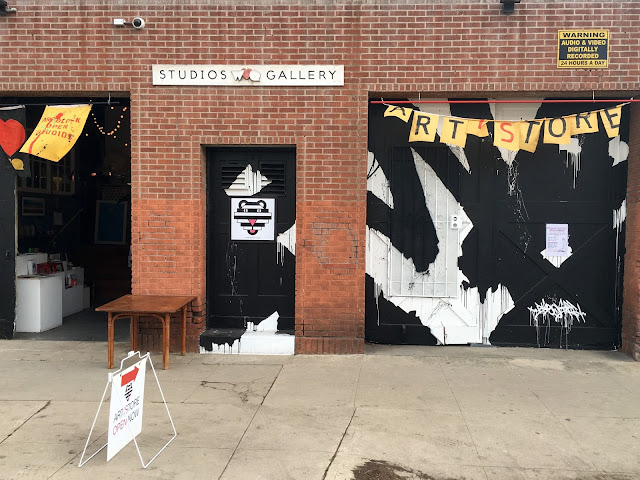 Because it's Venice, I decided to start with art. ART! That alone is so wide open, so there really is something for everyone. I heard they opened up an ArtiStore over on Sunset Avenue, in the Pamela Weir-Quiton gallery space, and that they were also offering all kinds of classes. I headed over there as soon as I was back to normal, and I'm so glad I did. What a wonderful, Venice-full spot! 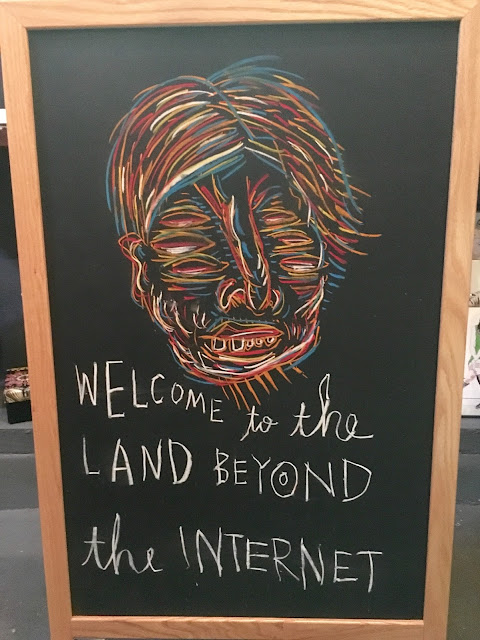 I was welcomed in by store manager, Yas Niktash, who told me that the store had been open about six months. With artist neighbors all around being forced out by greedy landlords (my take, not theirs, but it's true), the Weir-Quitons had to do something to keep the roof they've worked under since the 1970's over their head. They thought, "Open the doors." The galleries have been open during the wonderful ArtBlocks, but there had never been a retail space for their work to be featured in ... so now there is. 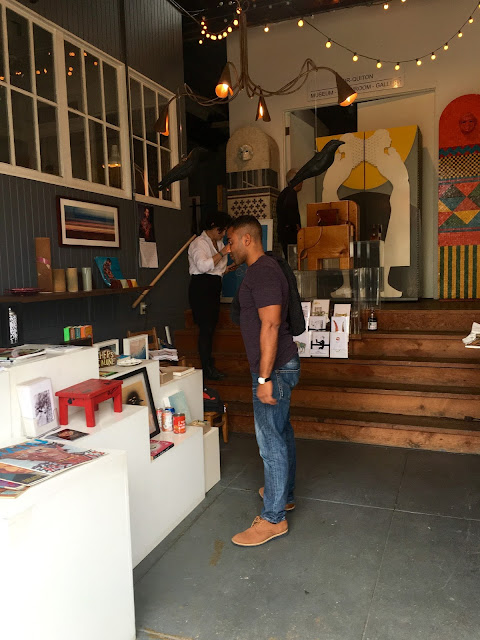 The store space is full of ArtBlock artists' wares, from the wonderful painted pieces and books by Rohitash Rao to the vibrant photography of Eric Schwabel, and so many in between that there is a phone book size catalog to browse. 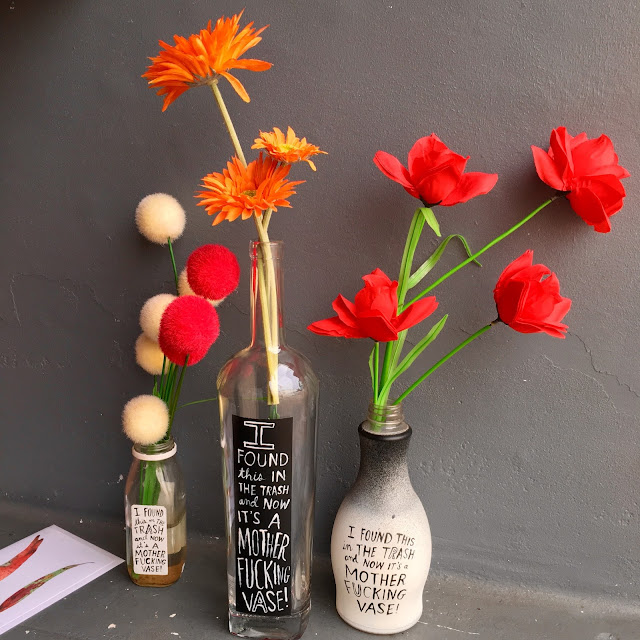 We sat chatting among all the great works of art for sale (and what better gift with a sense of place than a piece of art from a local artist? None.), as people strolling by from Gjusta or out walking their dogs and strollers would pop in and find out that this treasure was here ... because most didn't already know. 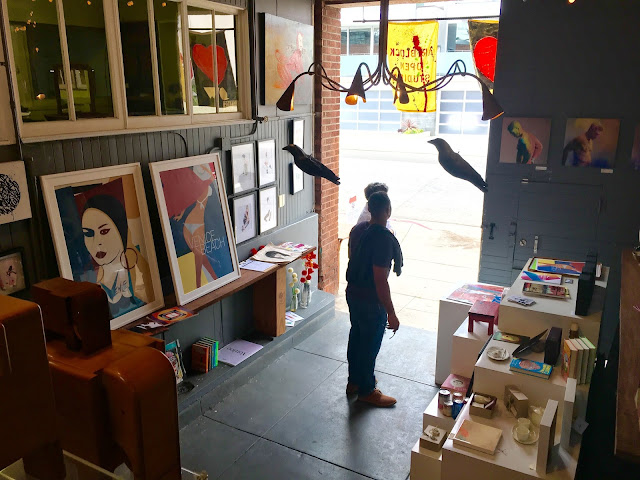 While answering questions about the art and galleries, Niktash also offered up to everyone that there were also classes available - and every single person seemed generally interested. I think most people have a soft soft in them for their art classes growing up (when schools still had them - ugh), and would for sure still get a kick out of it today. 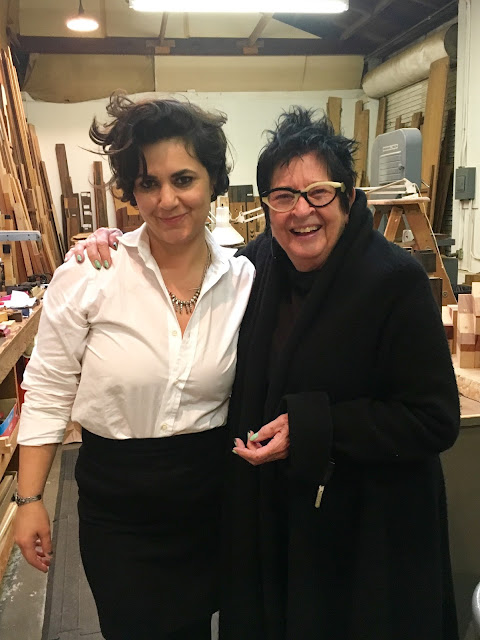 So you can take live drawing and illustration workshops (and Parent-Child classes!) from Pamela's husband, Gregroy Weir-Quiton (they hyphened both their last names), a charming guy who you can see is crazy about his wife of many decades (and vice-versa), ever since they met at the old Bullock's department store. 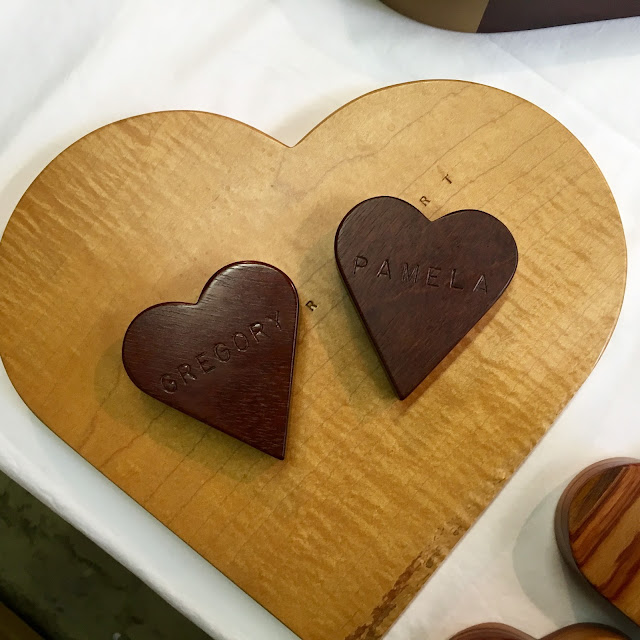 Both were highly interested in fashion, and working as an illustrator and in administration, respectively. Pamela was fresh from the Barbizon Hotel in New York, with her early Vidal Sassoon five point haircut, and turned Gregory's head permanently. They are so darling, and so supportive, it actually restores one's hope in true love. For real. *Interesting trivia: Gregory did the Dreamworks logo with the boy fishing off the moon. Which I love. 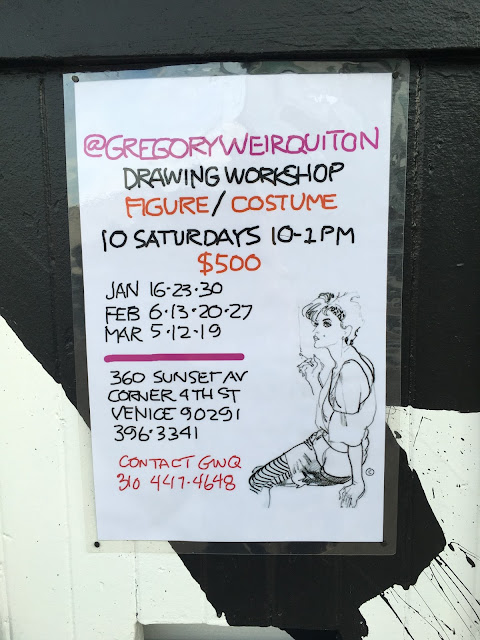 You may also take woodshop from Pamela, which I also heard is no longer offered in schools. What in the world are they still teaching kids?! I digress ... back to how much I want to take one of Pamela's classes! There's one coming up where she'll teach students how to cut out a beautiful wooden heart for Valentine's Day ... or just because they're beautiful. 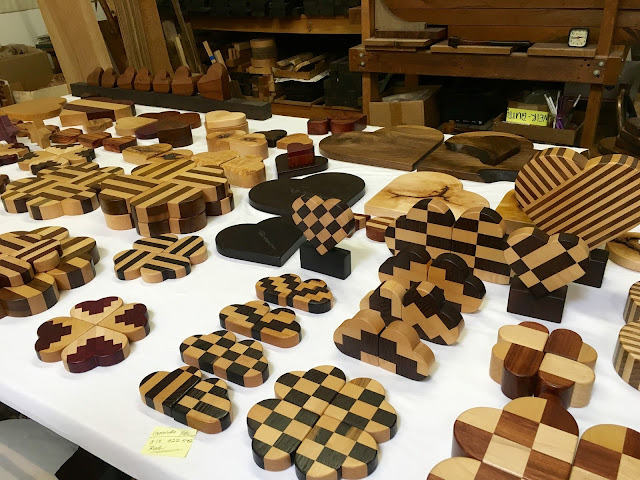 We sat in her wood shop (called the Heart Center), and she told me all about her love for woodworking, and her enthusiasm was both palpable and contagious. While her military family was living in Alaska, Pamela became interested in working with wood, and ultimately received her degree in Woodshop from Cal State - Northridge. She got a bunch of press for a wooden doll she made, which led to design shows, which led to national press, which led to her being this famous 21 year old functional wood sculpture artist gaining commissions for bank lobbies and things. Because she was doing what she loved. And still is. 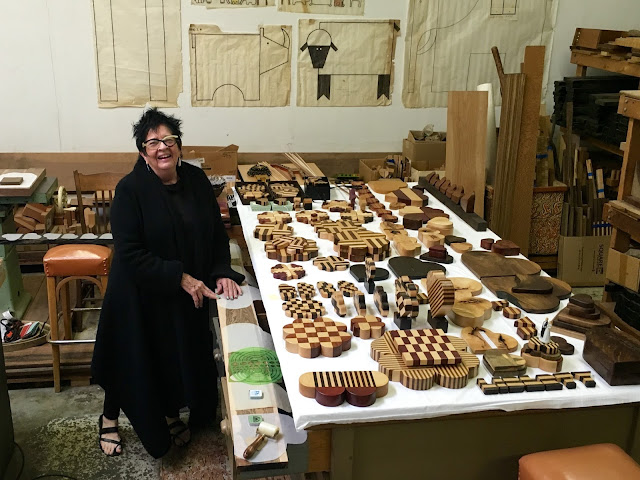 Teaching classes has been eye-opening and given the Weir-Quitons new inspiration by seeing their students so inspired. Their own love of what they do is inspiring others, and that's about the best life you can live, in my book.

Pamela wasn't allowed to take woodshop class as a young girl - because she was a girl - so she is entirely making up for it now. Wandering through her vast studio/gallery/workspace is like being in a toy factory of the finest kind. Menageries of animals surround you, gorgeous rocking horses, and serious works of art doll sculptures. "It's a creative Disneyland," she explained truthfully. 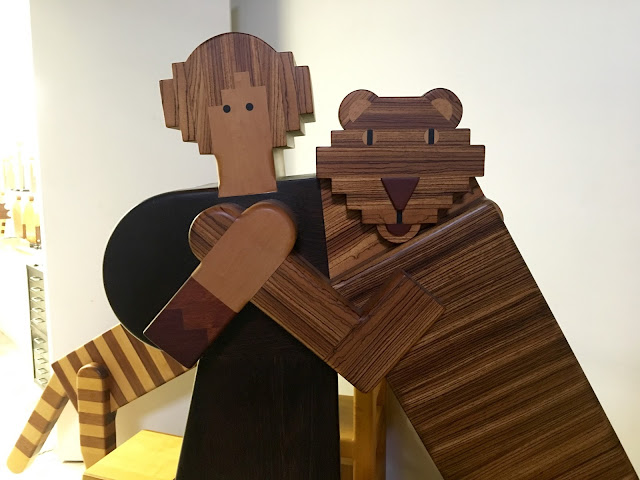 The wonderful space was 15 cents a foot back in 1973 when the Weir-Quitons moved in, $150 a month. 43 years later, that is no longer the case, but they're hanging in there, doing things like opening The ArtiStore because they love this building to the point where Pamela said it would be hard for her to choose between dying there or in her home. That's love, and you can feel it in every nook and cranny.

After hearing all about the history and inspiration, we lost time just talking about art and life and all good things ... like how when you get so excited and inspired by something you're doing that you practically levitate - "Trust that feeling." Like when she told me, "I'm in touch with being a spark ... I just want to be creative, and to inspire others to be so too." I loved that. She showed me some black star  wooden wands she had made right before David Bowie died, another soul in touch with being a spark. 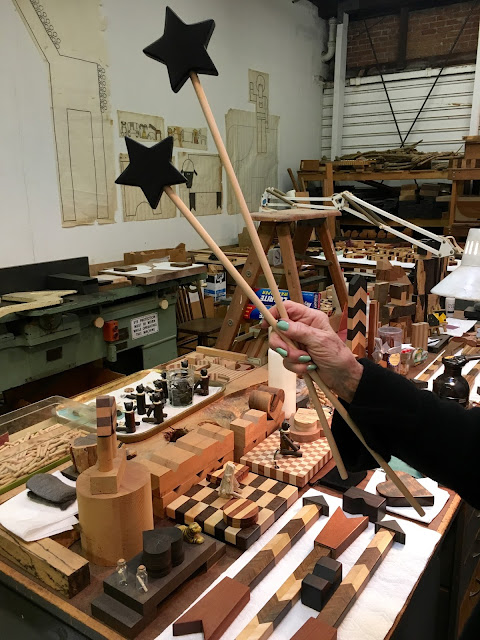 "My whole thing is about pLAy," says Pamela (who also loves words like me, and likes to point out the LA in them), which is evident, because you can't help but have fun around her, even while just talking - to the point that we didn't even realize that it was closing time. 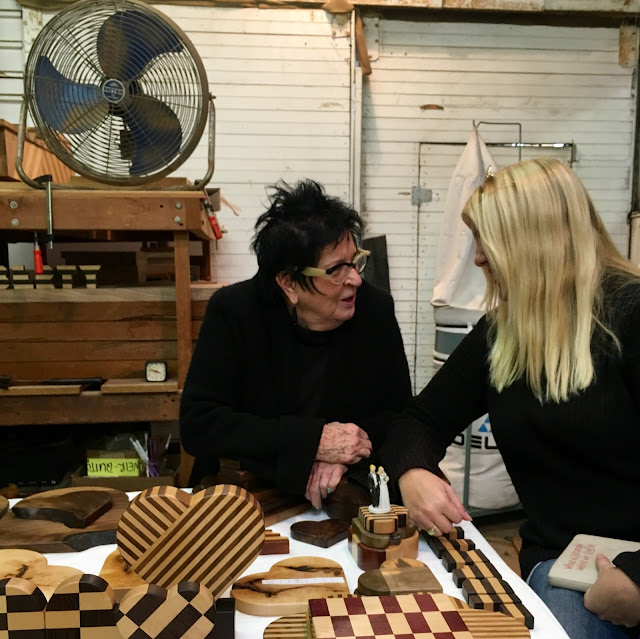 To wrap up and let her get out of there, I asked Pamela her feelings about Venice. She gazed ahead thoughtfully for a moment before sagely responding, "In a word, it's ENERGY." That is so often the answer when I pose that question, so you know there's something to it. She told me about how she feels differently about the Venice art community since the ArtBlocks began, because she used to just focus on her work in the studio, and then go home. Once the artists of the ArtBlock came together (and formed pretty much the whole thing in one night's meeting!), she feels so much more a part of a community, one that is special and sacred. "I want to live in a creative Venice. The energy in Venice is in flux right now, but it's alive. It's palpable. There's a fire underneath it. Look, you couldn't make this happen in Benedict Canyon." And she's completely right.

"I'm opening up my workspace to inspire people to make their own art," explains Pamela, and that's a great way of keeping Venice about the art, and about the fun. The more artists, the better! The more fun the better! Right? Right. (Some might think the classes are kind of expensive, but I look at it like it's a lifetime skill, and a lifetime of enjoyment, and way better than stuff. Thus, way worth it.) 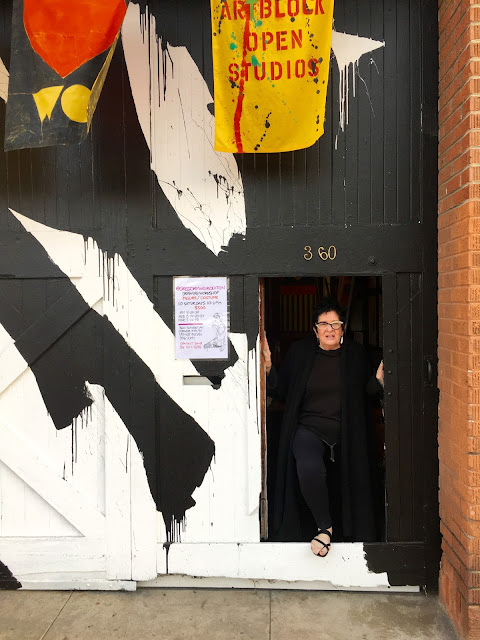 My wonderful new friend Pamela had this to say in closing, and I can't say it any better ... "Come to PameLA's PLAground (see, LA in both!)! Have fun! Be inspired! Never get old! Make things!"