We Can Be Heroes Forever And Ever

2016 has seen the loss of some real, real cool people already. Instead of feeling the optimism and hope of a new year, it has really felt pretty sad so far (It may also have something to do with the gnarly cold I've had all year so far, but still). First, the loss of Mötorhead's Lemmy Kilmister - everyone's favorite rocker/party animal/great guy/legend from the dread awful cancer, saddening the whole world of rock and roll ... and then ... THEN ... David Bowie. Cancer again. Gone. I didn't even know how sad that would make me until I heard the news late Sunday night and tears involuntarily rolled down my face.

I never got to see David Bowie live, and that's a regret I'll always have, but he sure was a big part of my growing up. He was all over MTV in the 80's, and we all knew from a very young age that Bowie was something special. That he didn't give a dang what anyone thought of him, and neither should we. That you could express yourself in the most wild, outlandish fashion with ideas fresh from a dream that might not make sense to anyone else, and still be all the cooler for it. Now everyone has to step up and be cooler, be kinder ... because an awful lot of cool was just deleted, and we've all got to make up for it. 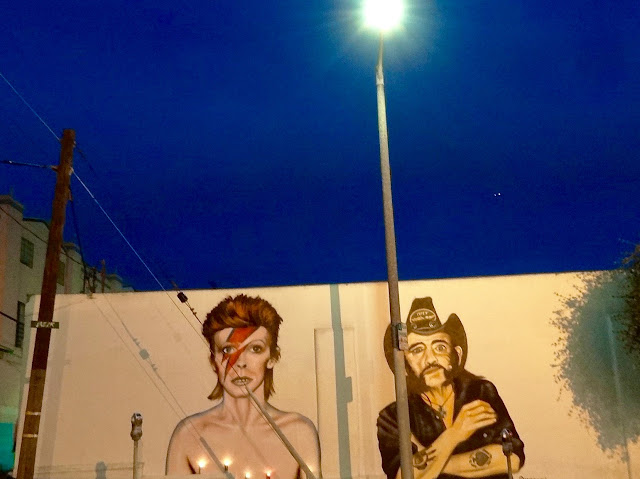 Artist Jules Muck painted a great mural on the side of Timewarp Records on Venice Boulevard of both Lemmy and Bowie, creating an instant memorial for fans to show their respect. The Townhouse hosted an all David Bowie listening/dancing party last night, so that everyone feeling all these feelings would have somewhere to go to share them. Bowie's hometown of Brixton in the U.K. had a spontaneous singalong of hundreds of people coming together to joyously sing "Starman" to celebrate the fact that we ever got to have such a presence among us in our lifetime. That sounds grandiose, but when you see every single social media feed showing nothing but Bowie, and just know that everyone around the entire globe was spinning Bowie records ... it IS pretty huge.

What a way to be remembered. And reminded ... that absolutely every single one of us can be Heroes. And should be.