A Farewell Bash For Attaway's Studio - Where Art Meets Eviction

There was a bittersweet party last Sunday ... more of a wake, really. Bill Attaway is being forced out of his studio space on Sunset Avenue, where he has worked and created his Venice landmarks for decades. It was dreadfully awful and superfun all at the same time. 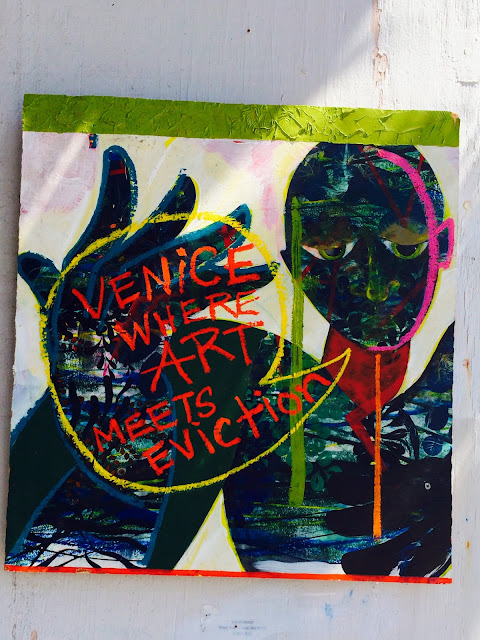 Awful because ARE YOU KIDDING ME that ATTAWAY of all people is being given the boot out of his legendary space and will now have to do his art in ALHAMBRA?!?! Where even is that? No more taking a break to ride his bike up to the Boardwalk and visit both his friends and his iconic mosaic obelisk next to the kid park at the beach. No more having people ride by his studio and stop in for a chat or music or who knows what fun may have been going on. No more. Superfun because it's a party at Attaway's ... and nothing more has to be said. 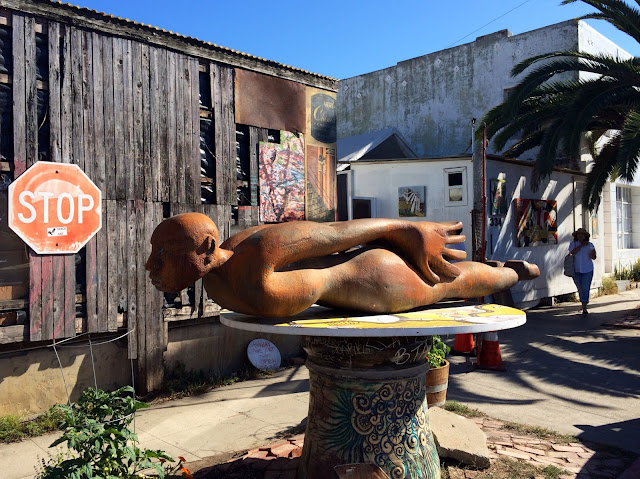 Oblivious day trippers standing in line down the street at Gjusta had no idea what was going on. Why longtime - some lifetime - members of the Venice art community and neighbors for decades and friends for years were spilling out on to the sidewalk, jam packed within the fences on a blazing hot day, wanting only to be even closer to each other one last time in this special place. 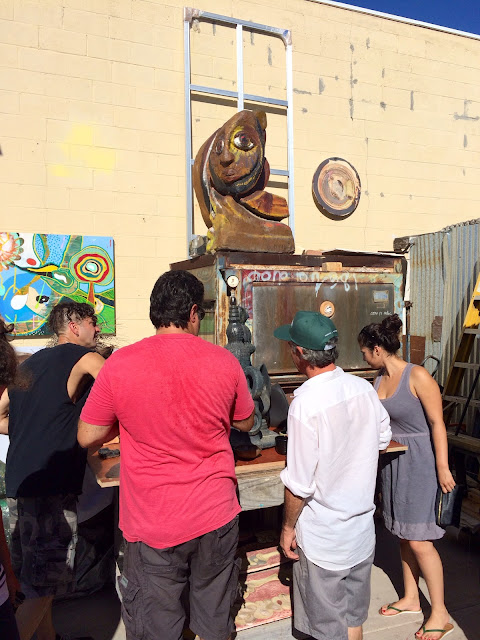 I first really got to know Attaway when I wrote a story about him a few years back. He invited me in to his studio, where we wound up spending an afternoon rapping and talking about how much we loved living and working in Venice. NEVER did I think I'd be writing a story about a party for him having to leave. Never. 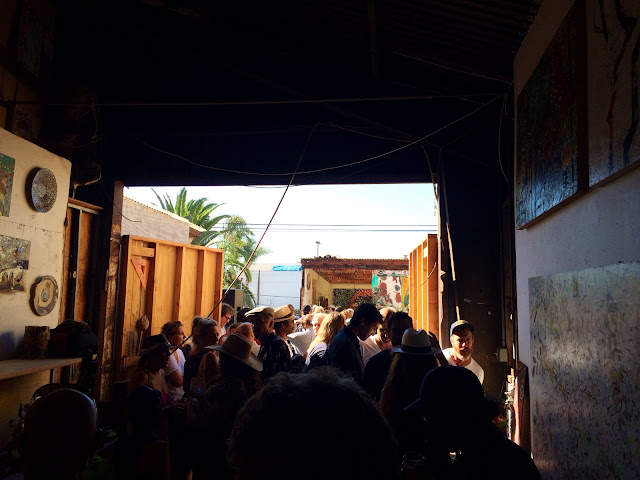 In a recent Wall Street Journal story on the dorking out of Venice by Google and Snapchat, longtime resident and film director, Tony Bill (in fact, he directed the first movie I ever worked on, Untamed Heart) was quoted saying some smack about how Venice has never been for starving artists, it's for "Accomplished Artists", and that if you're accomplished, you can afford the rents here. Seriously, Mr. Bill?! Everyone I know in town has their blood simply boiling over that statement, and the fact that Bill Attaway is being priced out of his studio shows how very false, inaccurate, mean spirited and downright dickhead that crack was. Bill knows well how it's always been and that the very artists who ARE now accomplished (I'm sure he's thinking of Moses, Bell, Lodato, etal) ALL moved here in the first place because of the cheap rents, so respectfully, give me a BREAK. 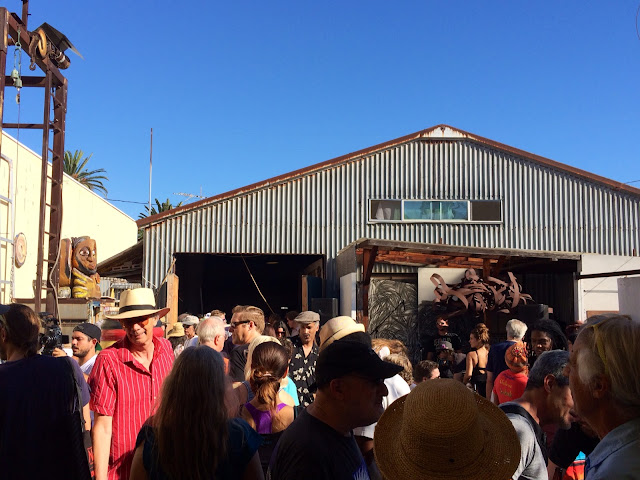 If all the great artists are priced out of Venice, all you've have left is a bunch of tech zombies in skinny pants going to the same chain stores they go to in other homogenized places that were already taken over by the corporate greed machine. And who wants to hang out in a place like that? Not anyone crammed into Attaway's party on Sunday, I can tell you that for sure. 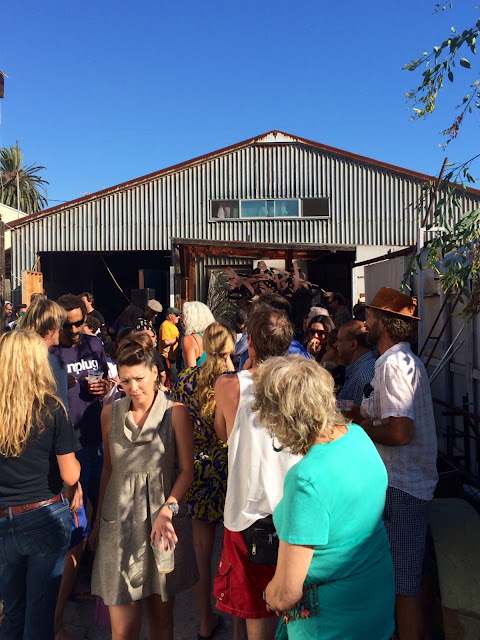 There was some live music by Sleep Sleep (aka our friend Brandon) that was awesome. People laughed and hugged and told stories and pretty much tried to avoid talking about the ridiculous reason for the party. Guys were hauling in kegs and vats of food and it was a big old neighborhood style potluck that nobody wanted to ever end. 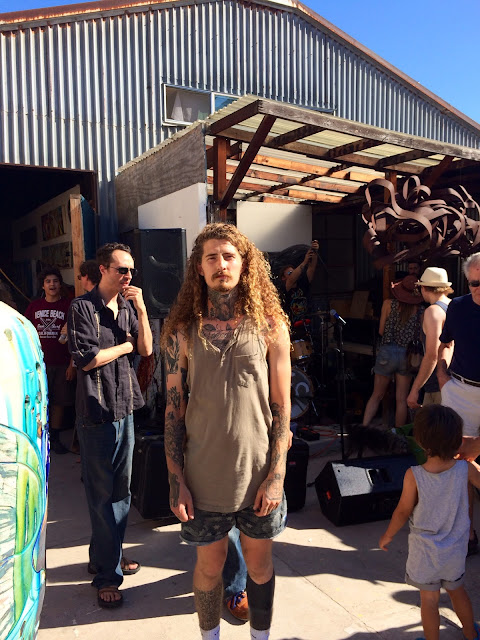 The bad news for me was that it was also Bob Marley's 70th Birthday Concert starring his sons at the Hollywood Bowl, and I'd had tickets since May and look forward to Reggae Night at the Bowl each and every Summer. I couldn't stay to see the real end of Attaway's studio, and in a way I'm glad. This kind of stuff is very hard for me to take, and I could see myself getting rebellious that night. I got to see all sorts of beautiful, talented, ACCOMPLISHED friends and artists all coming together to honor one of their own with one last hurrah. 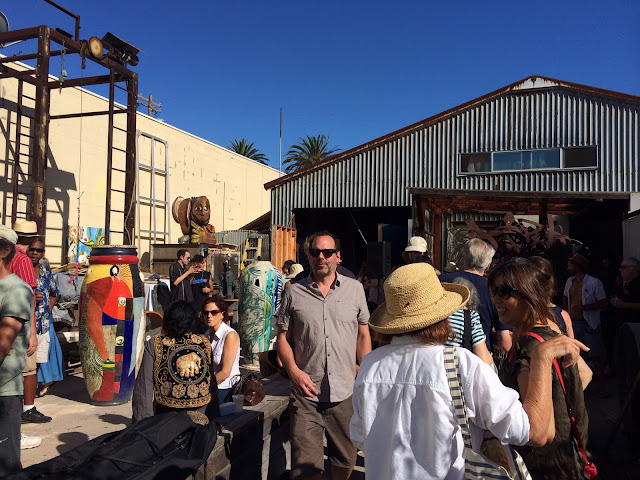 I finally tore myself away to get in the car to the Bowl, and as I walked down the sidewalk, there was Attaway, sitting quietly outside with his little boy, having a moment to themselves. I couldn't find him inside to get a statement about it all, but when I saw him outside alone, no words were needed at all. We both knew damn well how we were feeling. We hugged and kissed and meant it, and I said goodbye. Not to my friend Bill Attaway, but to a time and place that we all held downright sacred in our hearts. 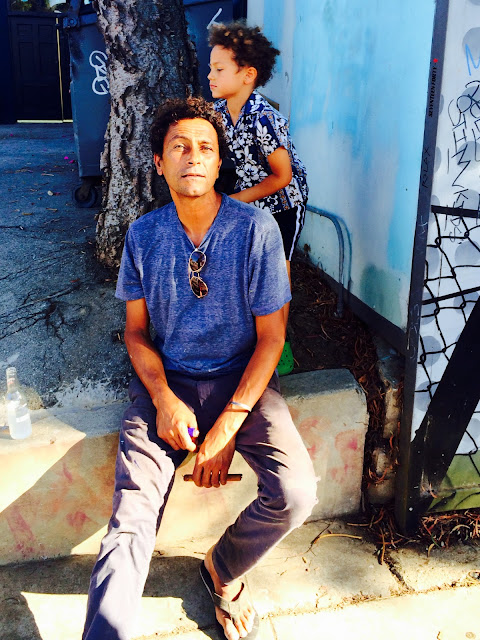 Anyone making ridiculous money from this kind of devastation to a culture and a groovy way of life should be first ashamed of themselves, and then punch themselves in the face so I don't have to. It's disgusting. OF COURSE there's going to be change, but have some mercy. Have some creativity. Have some VISION. Because if you think you're cool because you just moved to Venice and booted out someone awesome to take their rightful place, you just made your house the most uncool place in town. And people know it. Venice is cool because of the people and the art and the music and the surf and the skate and the culture and the PEOPLE that made it that way. The moment that's gone, so is your big property value. Gross.

But we have to also celebrate that time EXISTED at all, while fighting like hell to preserve it. So Attaway went back inside. I went to the Bowl.

An entire amphitheater of the most diverse audience ever sang along at the top of our voices to "One Love". Everyone was up and dancing. Everyone was sharing everything they had. One guy in our section was throwing out individual jello shots he'd made to people all over. Beach balls were bouncing overhead, with everyone chipping in to keep it going. It was so fun you could hardly process it. It was also extra inspiring ... and the perfect antidote to the sadness I'd earlier felt. It IS possible for everyone to co-exist, and everyone really knows somewhere within themselves what is right. It's our collective job to make sure we bring that best out in everyone, the best we can, to truly live One Love.