We zipped down to Laguna Niguel to the Ritz-Carlton, where the 26th Annual Waterman's Ball was being held, just as the sun set on an unusually hot day by the sea, casting the entire event in an appropriately Golden State kind of light. It was a truly stunning setting, honoring some truly stunning people. 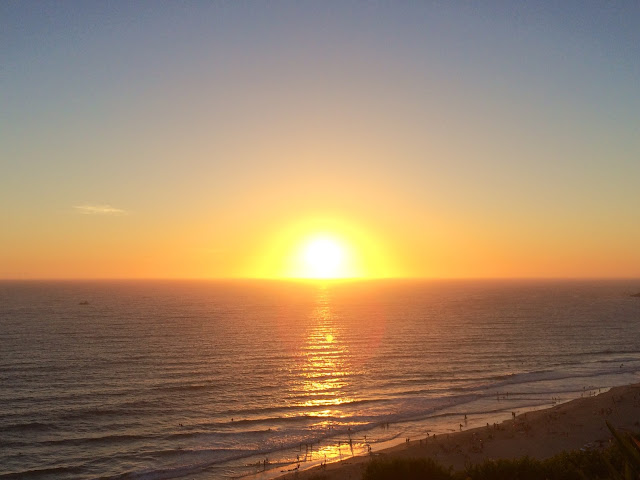 Everyone was decked out in "Creative Black Tie", which meant that you saw everything from beaded gowns to flowered Bermuda shorts. It was some great people watching, and I think this cute couple won Best Dressed for me. The dress was Mara Hoffman, and the woman had drawn waves on the guy's jacket to match. Creative! I loved it. 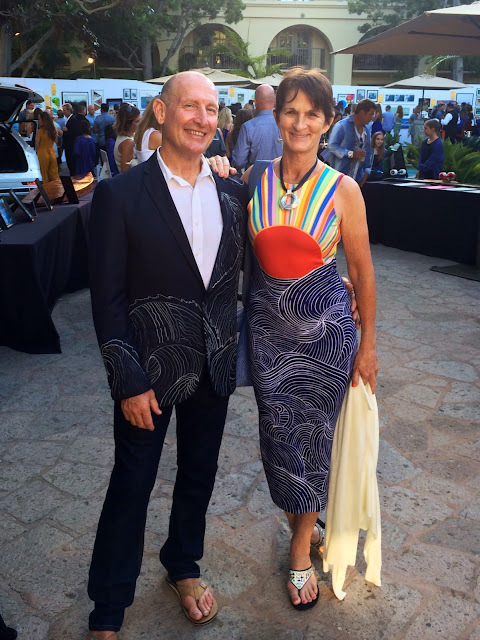 In the ladies room, I had a moment with this regal woman dressed in a black dress with a striking fuschia orchid lei on. I complimented her on it, and her eyes got all kind and crinkly with her big smile. She took my hands and said, "Oh, thank you, honey." ... and I felt like I got super powers or something from her. Like I tangibly felt stronger. I can't explain it, I just immediately adored her. We told each other to have fun, and off I went, looking at surfer dudes, and feeling kind of magic.

There was a silent auction to raise funds for the various organizations that SIMA (Surf Industry Manufacturers Association) supports, with things like hotel packages, signed skateboards, and whole bunch of cool surf art. Little girls and their Moms in matching jackets from the NCL (National Charity League, I was told by a grommet girl in glasses) manned the booths, and were all smiley and informative. It was nice to see a next generation of people actually caring about things. 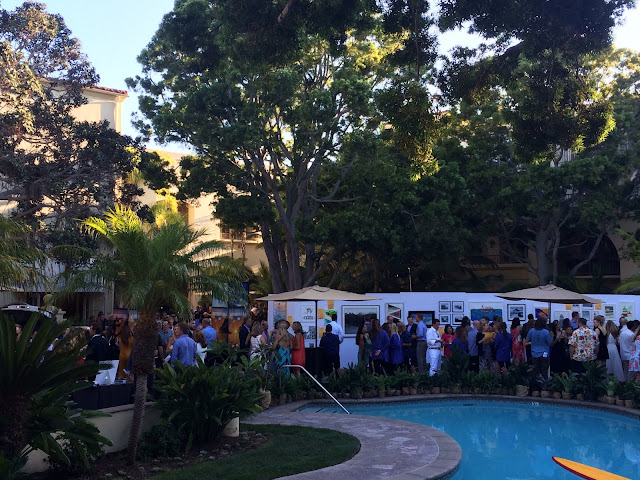 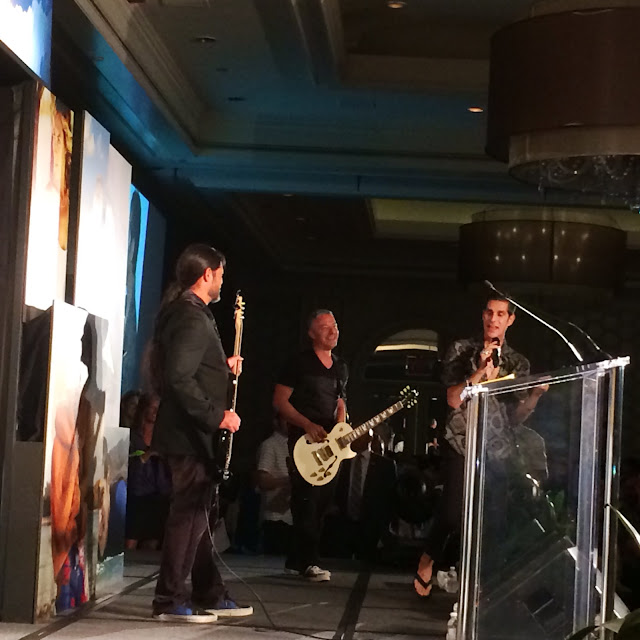 OH, have we missed PFP! They jammed out "Tahitian Moon" - an all time favorite, and the entire ballroom went bananas. It's such a surfy song, and the story behind its writing happened on a surf trip, and it was all just perfect. 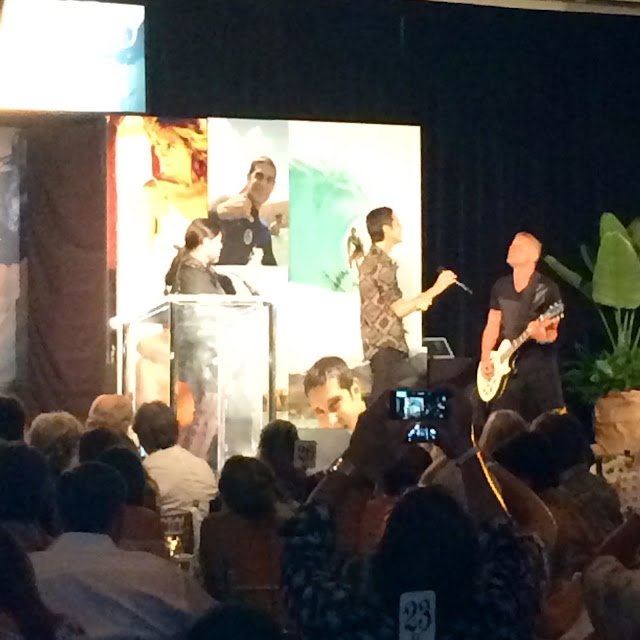 That riled people up to be spirited bidders on the treasures up for the live auction. Cool things like a VIP weekend at Lollapalooza (trust me, you want that). Honoree Stephanie Gilmore bid on and won the freshly played bass guitar signed by Farrell, DiStefano and Trujillo, adding $10,000 to the oceans' coffers. You could bid on having artist Letty Nowak paint a portrait like they one she did of Rob Machado. The thing that most caught my eye and was listed as "Priceless" was the gorgeous 1935 Tom  Blake wooden paddleboard, ultimately won by Farrell himself. Yay! 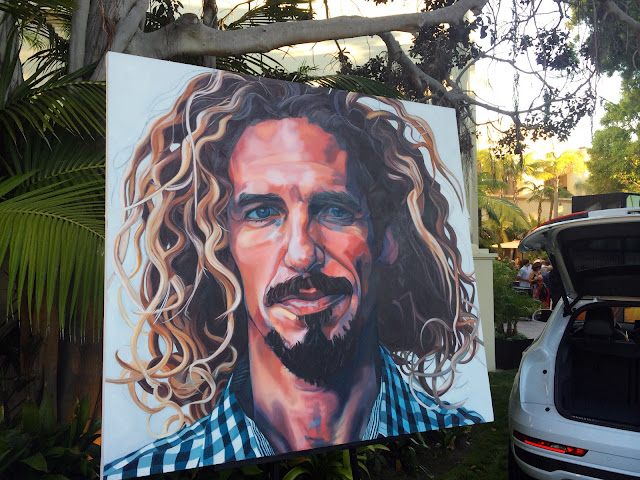 Then it was time for the tributes to the honorees. Each had a video about them play before the award presentation, and when it was time for the Lifetime Achievement Award going to the late Doc Paskowitz, the room grew reverent. Paskowitz is famous for tossing aside his medical career to take his wife and nine children surfing around the world living in a van (as seen in the great documentary Surfwise), spreading the gospel of surf. It was then that I realized the regal and wonderful woman from the ladies room was Doc's beloved wife, Juliette! It all then made sense as I watched their spectacular life and love together in the video. She was magic and strong and full of love throughout their life together, and exactly what I experienced from her in our brief moment together. What a special family. When Juliette and her daughter came up to accept the award, no eye was dry as they blew a kiss above. Not mine, for sure. 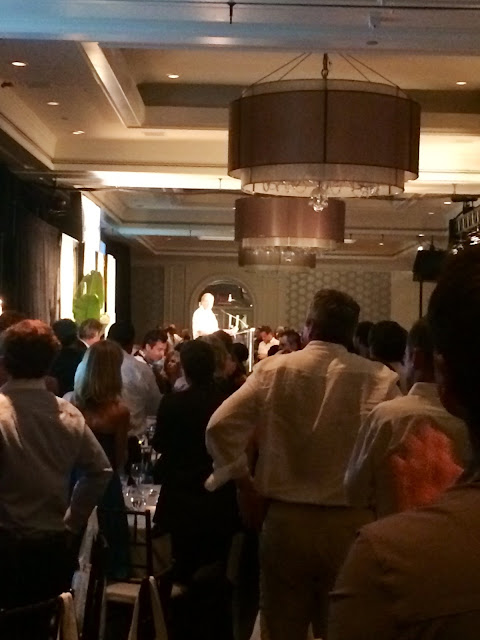 Environmentalist of the Year, was next, and my friend, Perry Farrell was the well deserving recipient, presented by his Venice surfing buddy, Trujillo. This is a guy who makes sure Lollapalooza is one of the most eco-friendly festivals there is. I've been in  the family home overlooking the vast expanse of the Pacific, I've traveled across the country with the Farrells, and I can tell you that the Earth and its Oceans could not be more important to him. You can actually see him feel it in his body as he performs, as he surfs, and even just as he talks, all animated and flowing. He accepted his award with great humility, and an even greater imitation of Doc Paskowitz telling him to get rid of his Mercedes for what they did to the Jews. Another story was told about roaming about his Venice neighborhood in a towel, carrying a metal spear for protection. Those were the DAYS in Venice, and why we're all so wistful and protective about Venice now. But I digress ... 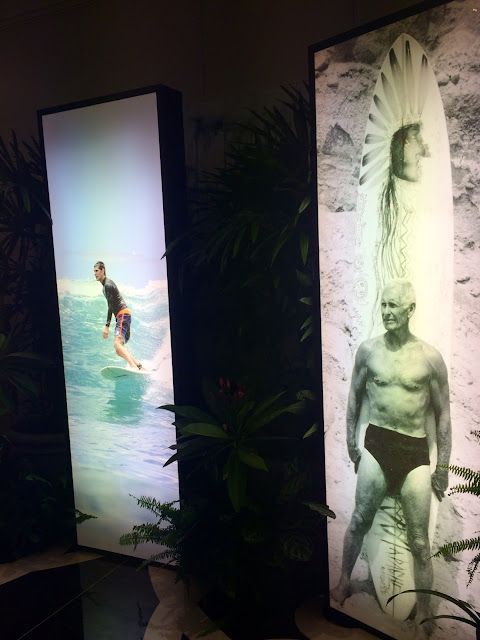 Great cheers erupted for the surfing front man as he thanked everyone and said that music goes hand in hand with surfing ... the sound waves. Trujillo and Farrell both spoke about how important it was to them as musicians to also be members of the surfing tribe. "The Ocean would always heal me," said Farrell in closing, and it was special to watch his gorgeous wife and spectacular sons watch and learn from their Dad about these things that are the most important in life ... nature, true friendship, and love of all of it. 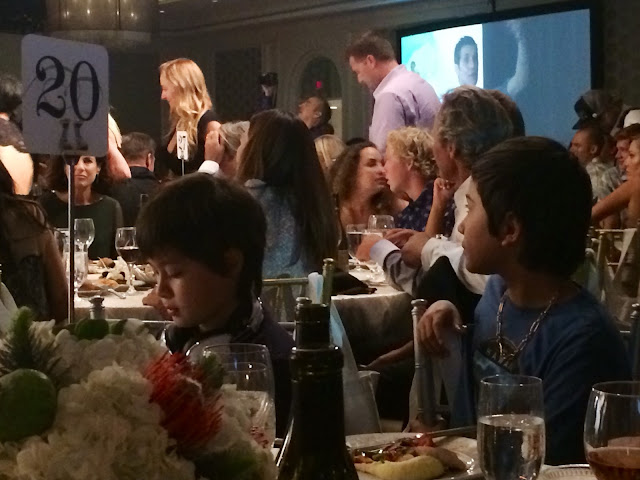 The last award of the night was presented to Stephanie Gilmore for Waterman of the Year. Waterwoman. Mermaid. Clearly still stoked on winning the bass, she spoke with a delighted glow about her love of surfing, and how it's the best feeling in the world. "A true waterman loves what they do. They have fun. Maybe that's why I'm getting this award... And I highly recommend surfing as a job!", joked the charming, super-talented, and obviously grateful Gilmore. 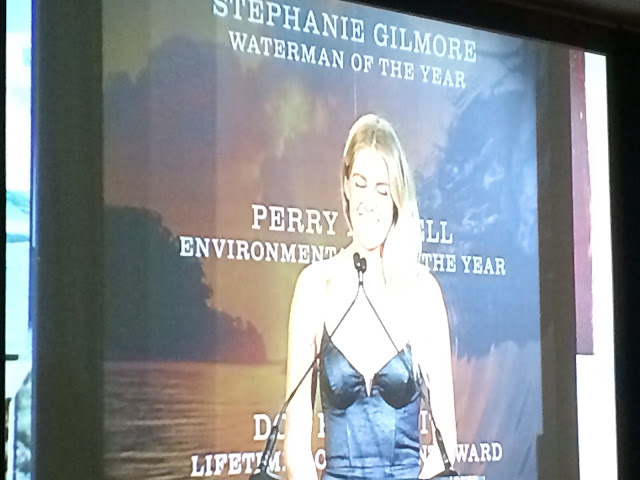 After closing thanks from the SIMA people, the party split to celebrate at the upstairs bar on a perfectly starry Southern California night. As I made my way to the door, I walked straight in to Juliette Paskowitz again. We hugged and I told her I had no idea that she was the night's honoree when we met, and I was so honored to meet her and be moved by her. That same crinkly eyed smile of real, authentic living and happiness met my eyes again, and I felt the power of good people once more.

Thank you to SIMA and the Waterman's Ball for recognizing these kinds of people and everyone involved for caring about our Mother Ocean. And to the wonderful Farrells for having me as their guest ... Under the Laguna Moon.