It seemed as though half of Venice made the trip downtown for the opening night party of the L.A. Art Show. Everywhere we went, we'd bump into another Venetian (many, like us, guests of Paige Petrone and the fine folks at L.A. Arts Online), making me so happy that we're all still so much about art. 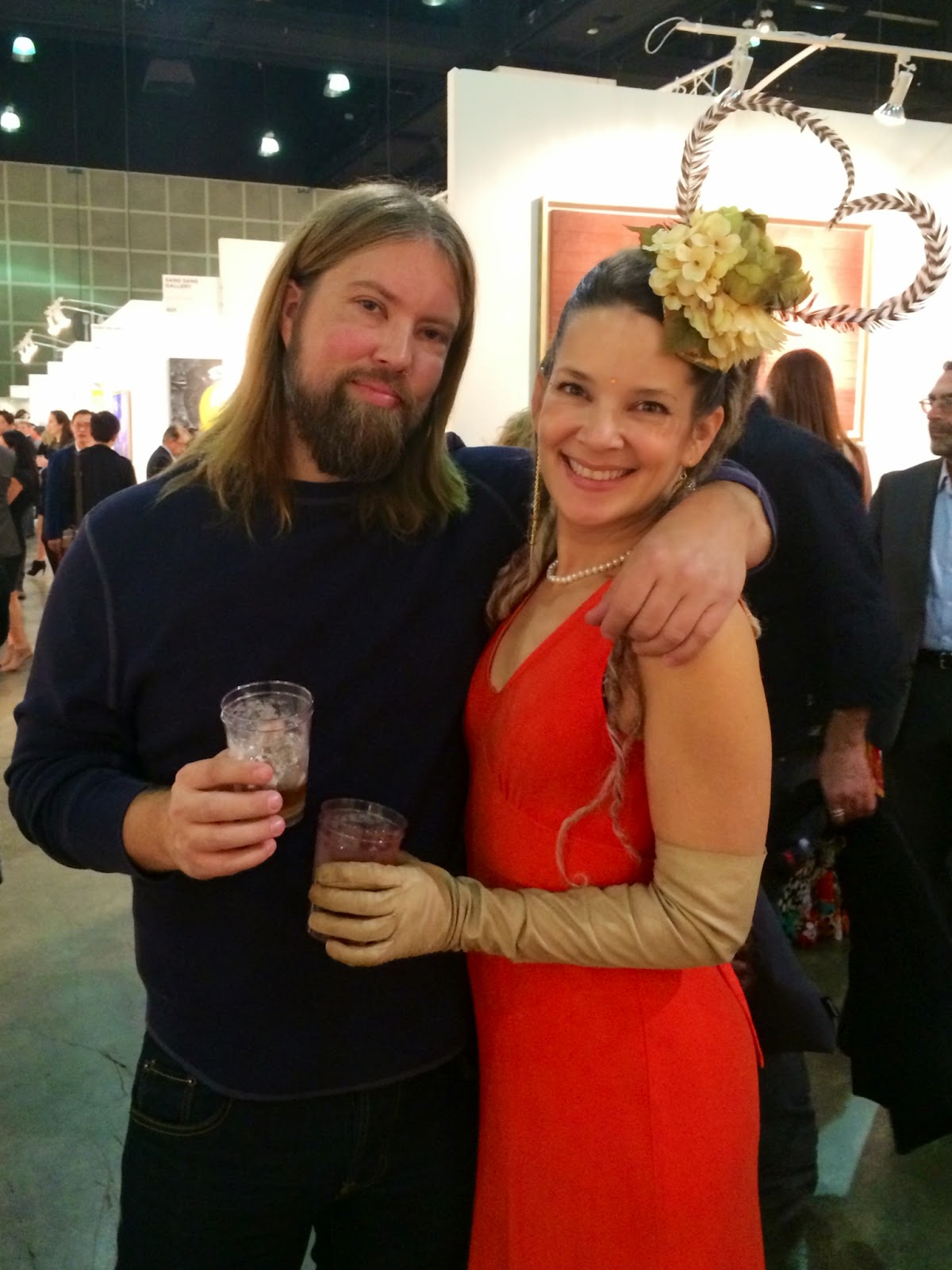 The L.A. Art Show is massive. I don't know how long it would take to see it all, but most likely more than a weekend, never mind a night (when you're all also partying and schmoozing). This thing is about the art. The ART! Everywhere art. So much, so many kinds, it would all be a bit overwhelming if it wasn't so just plain awesome. 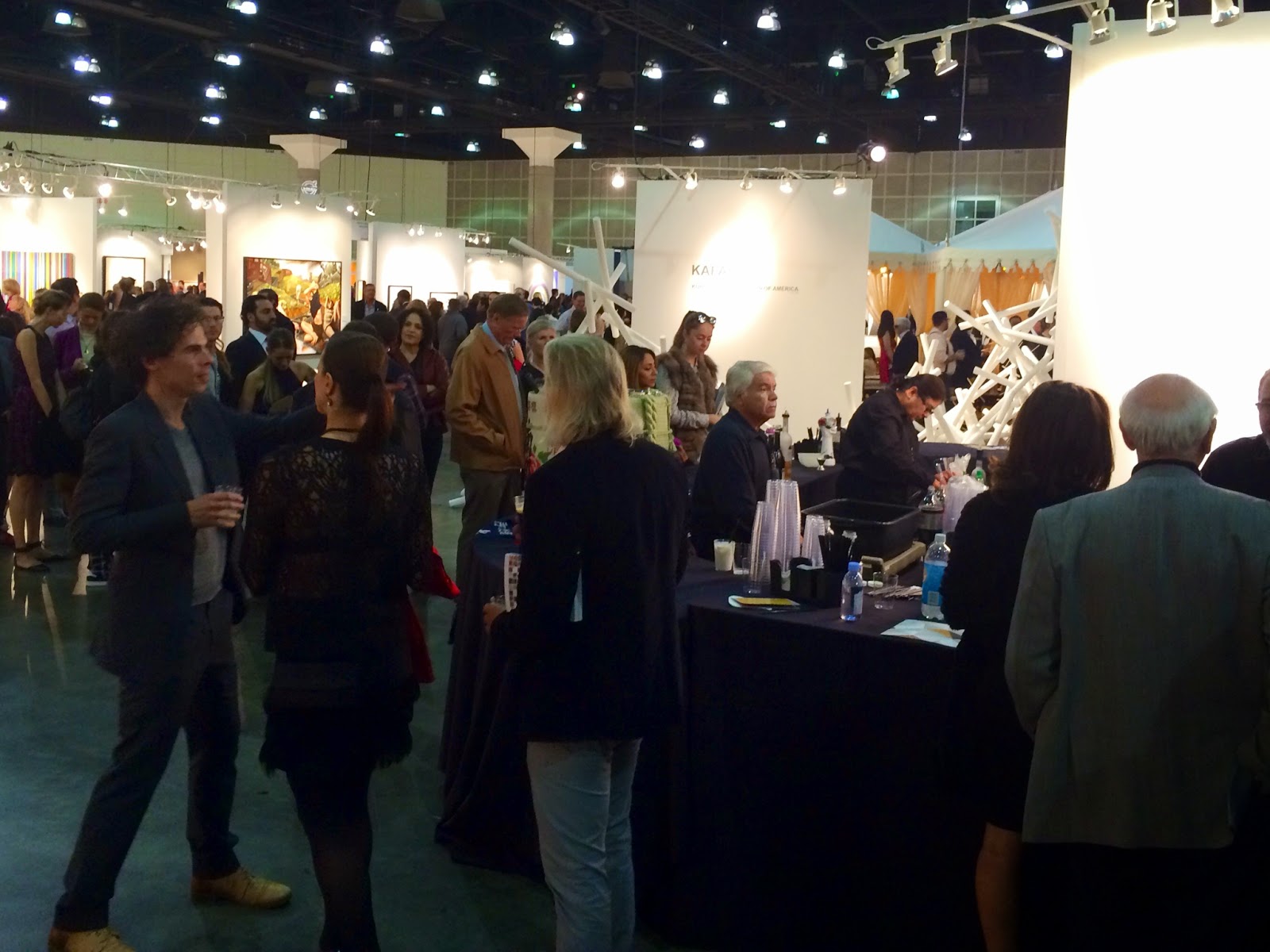 We were talking about how even if price was no object, it would be hard to pick one thing, with all the variety and sheer volume of works. Paintings, photos, sculptures, dresses, wooden planes ... you name it, it can be found here. 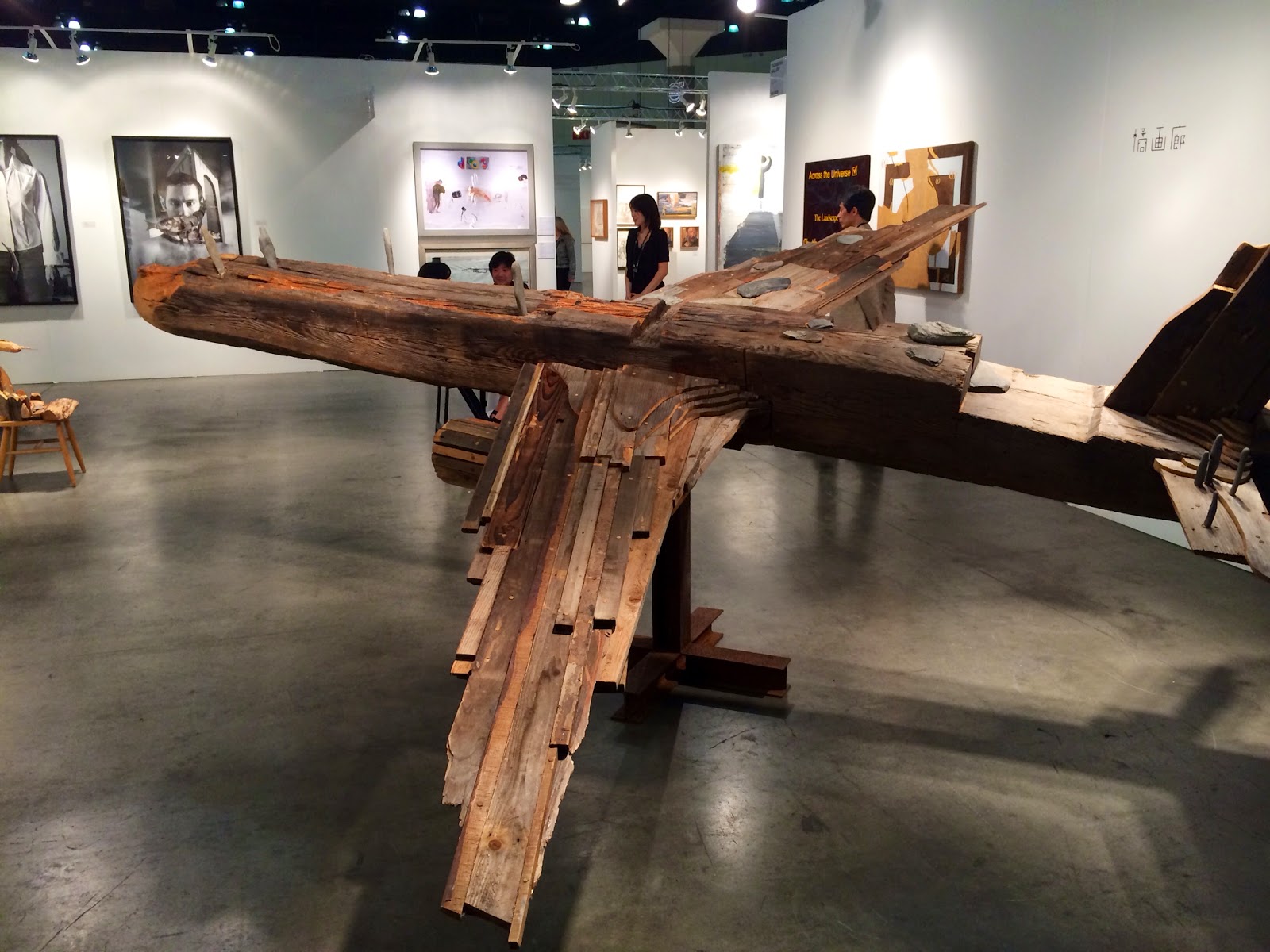 From crazy stuff that you have no idea who the purchaser could possibly be (but having said that, there is something for everyone, and someone for everything) ... 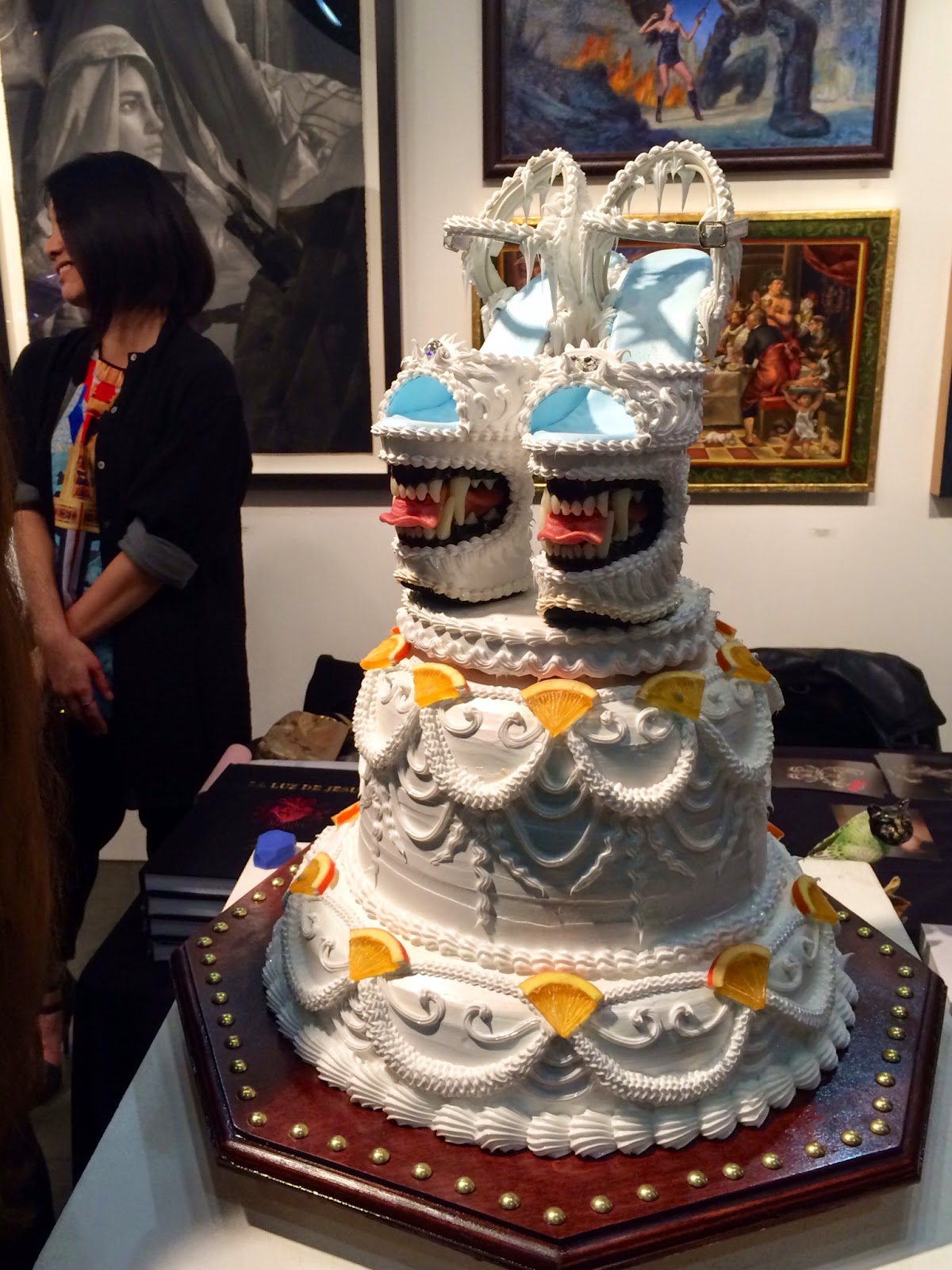 ... to the old classics that everyone knows ... 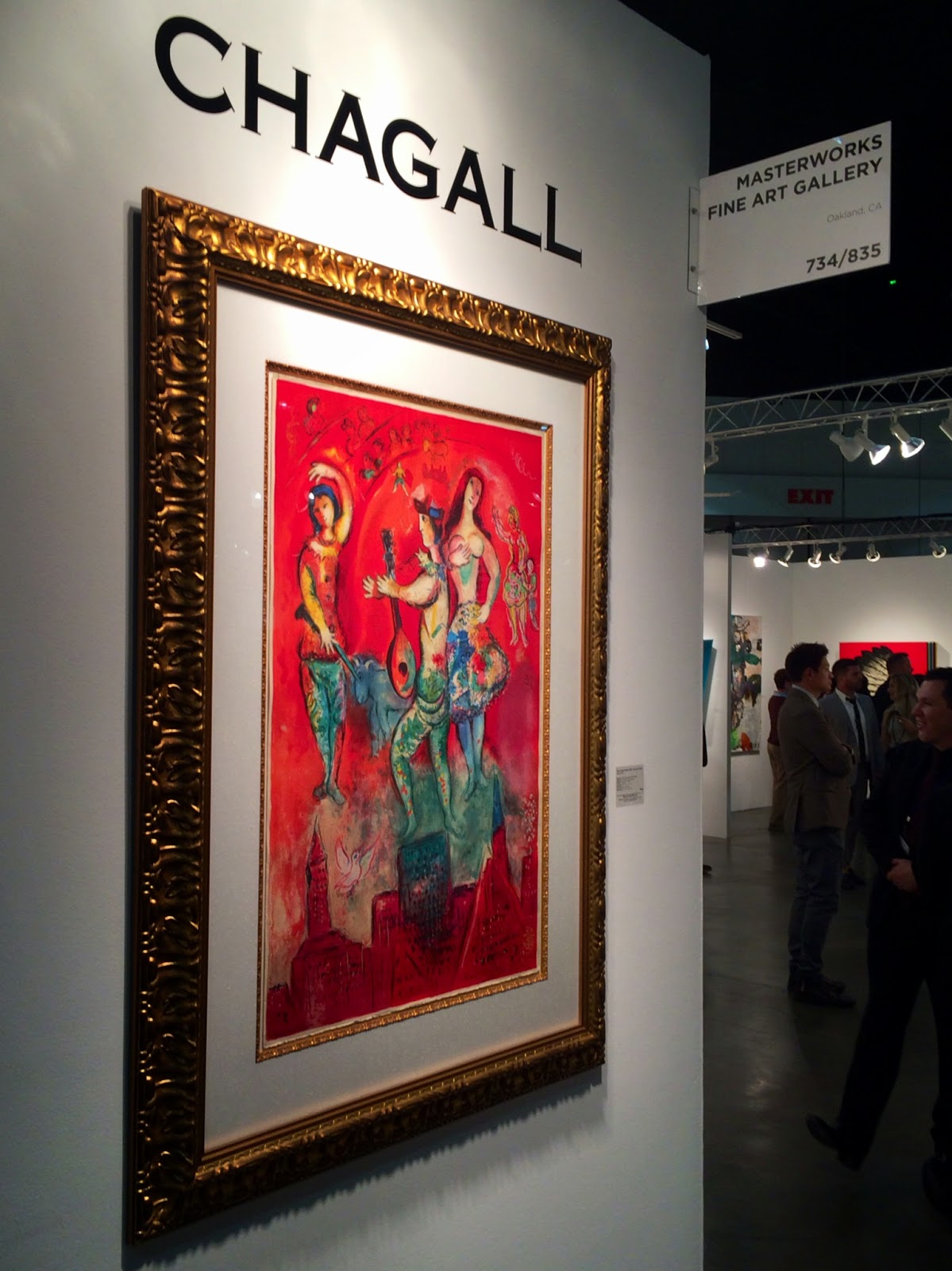 ... to things that seemed to be created just for this event, like the very long-lined Circus Tent peep show, the L.A. Art Show has it. 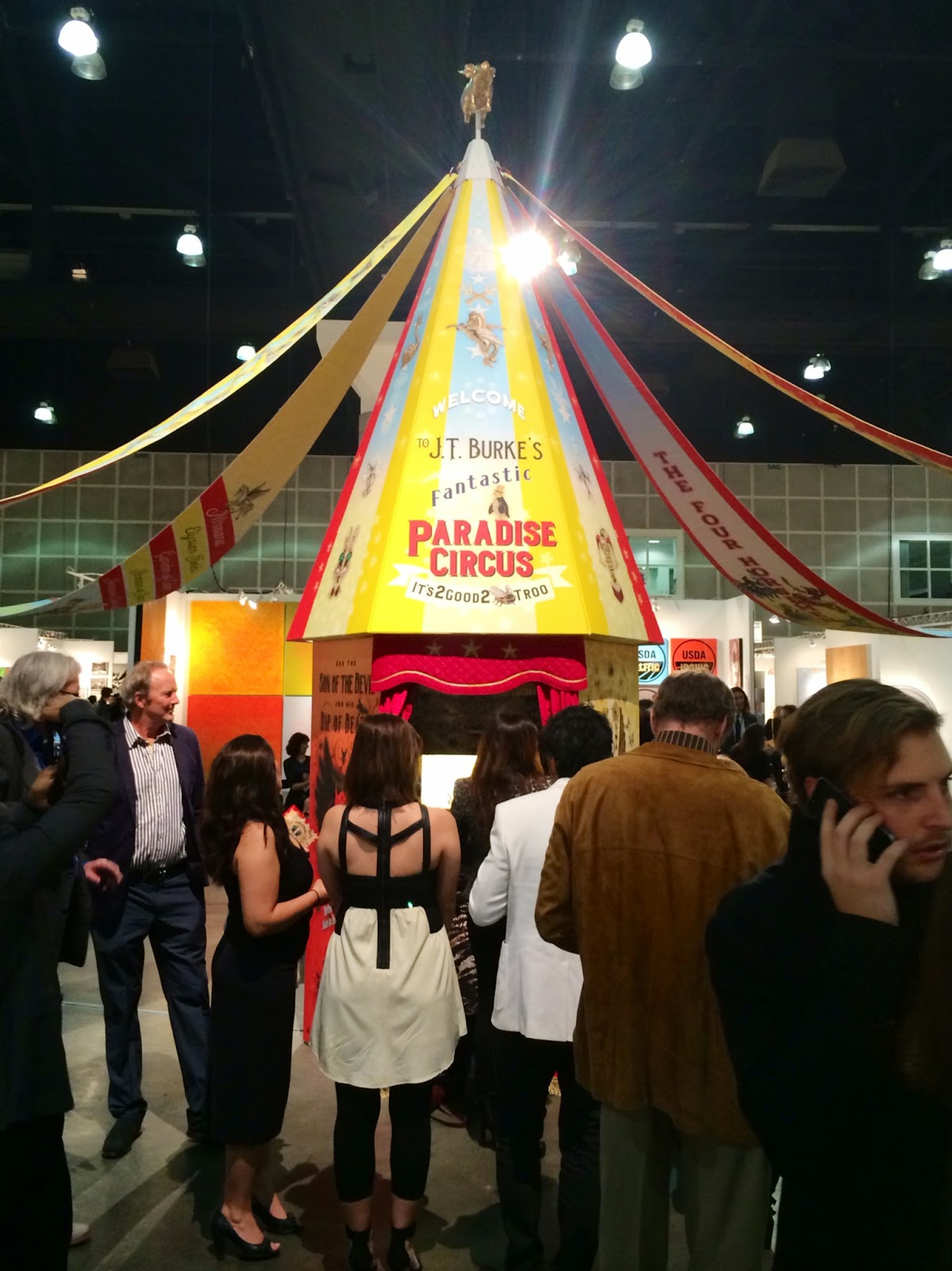 When we first arrived, I asked a friend who'd been there a while what was a do not miss, as there's so much to see. She said "Dali and Warhol". I assumed she meant works by them, but nope. She meant practically the real deal. 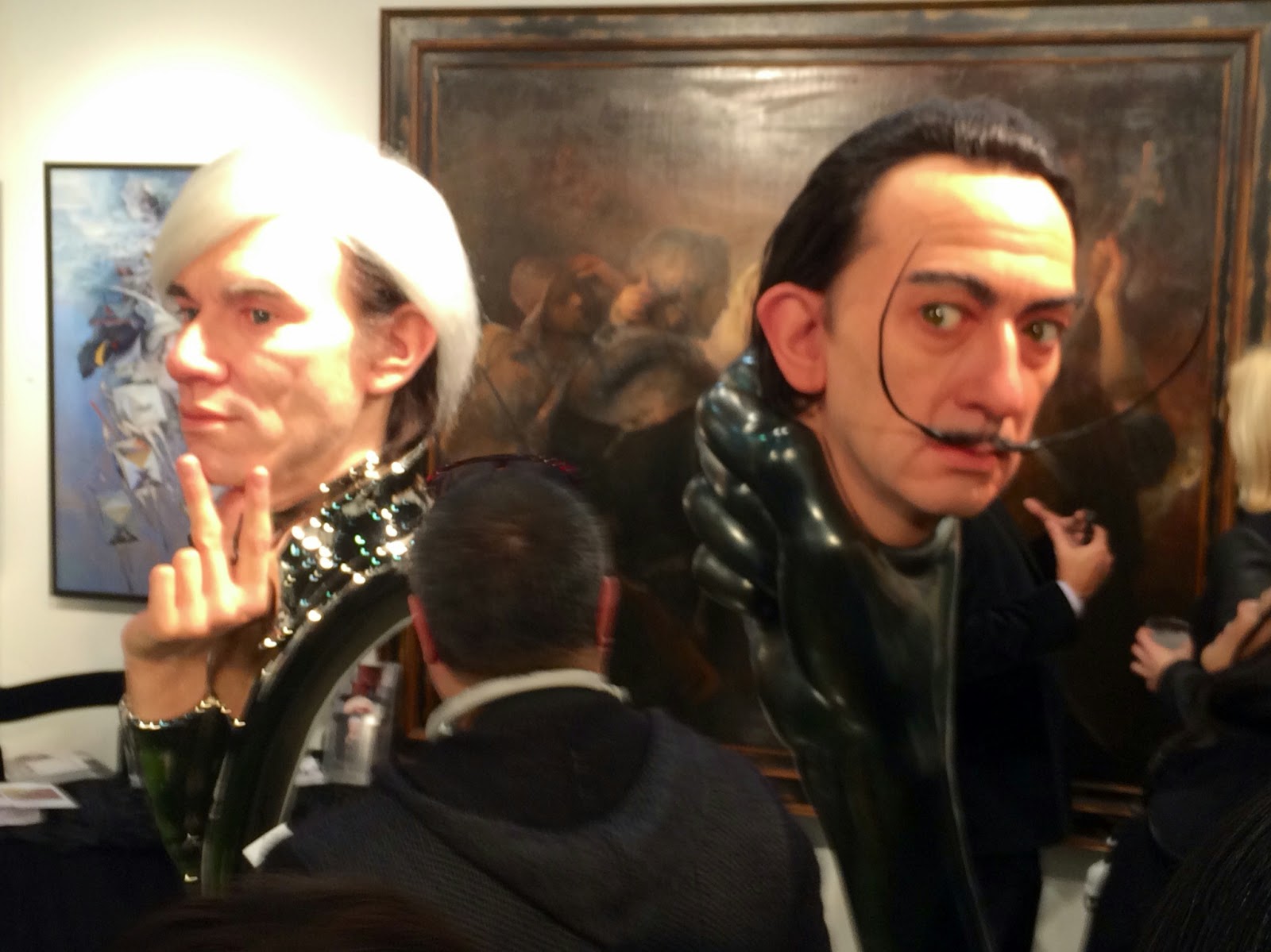 It wasn't hard to find them, as there was a big crowd around these fellows the entire party. So realistic, it was both beyond impressive, and kinda creepy. It was so packed I never even found out who the artist was ... and can't seem to find online. But, good job, Artist! 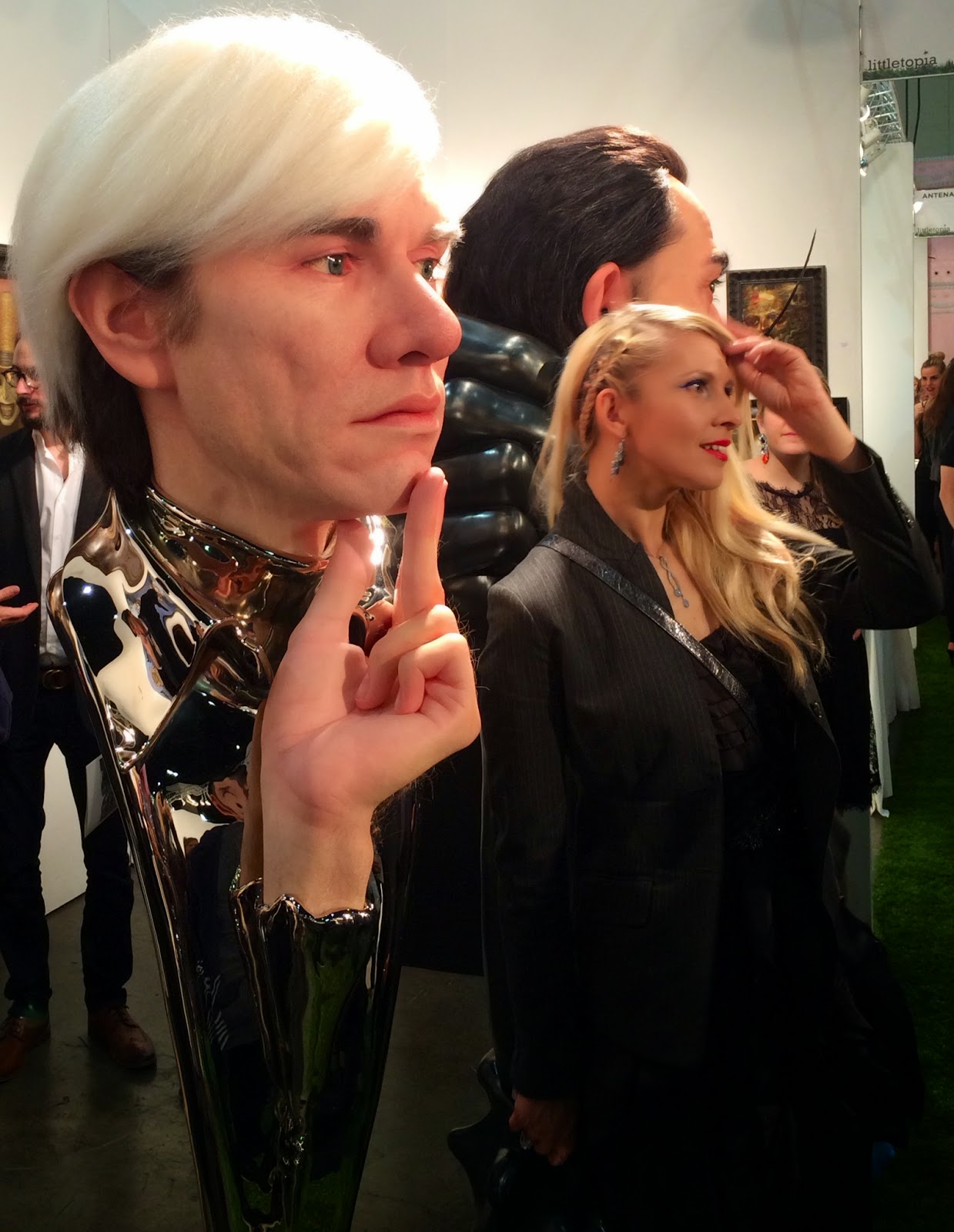 There were plenty of works featuring other world icons, like Abe Lincoln ... 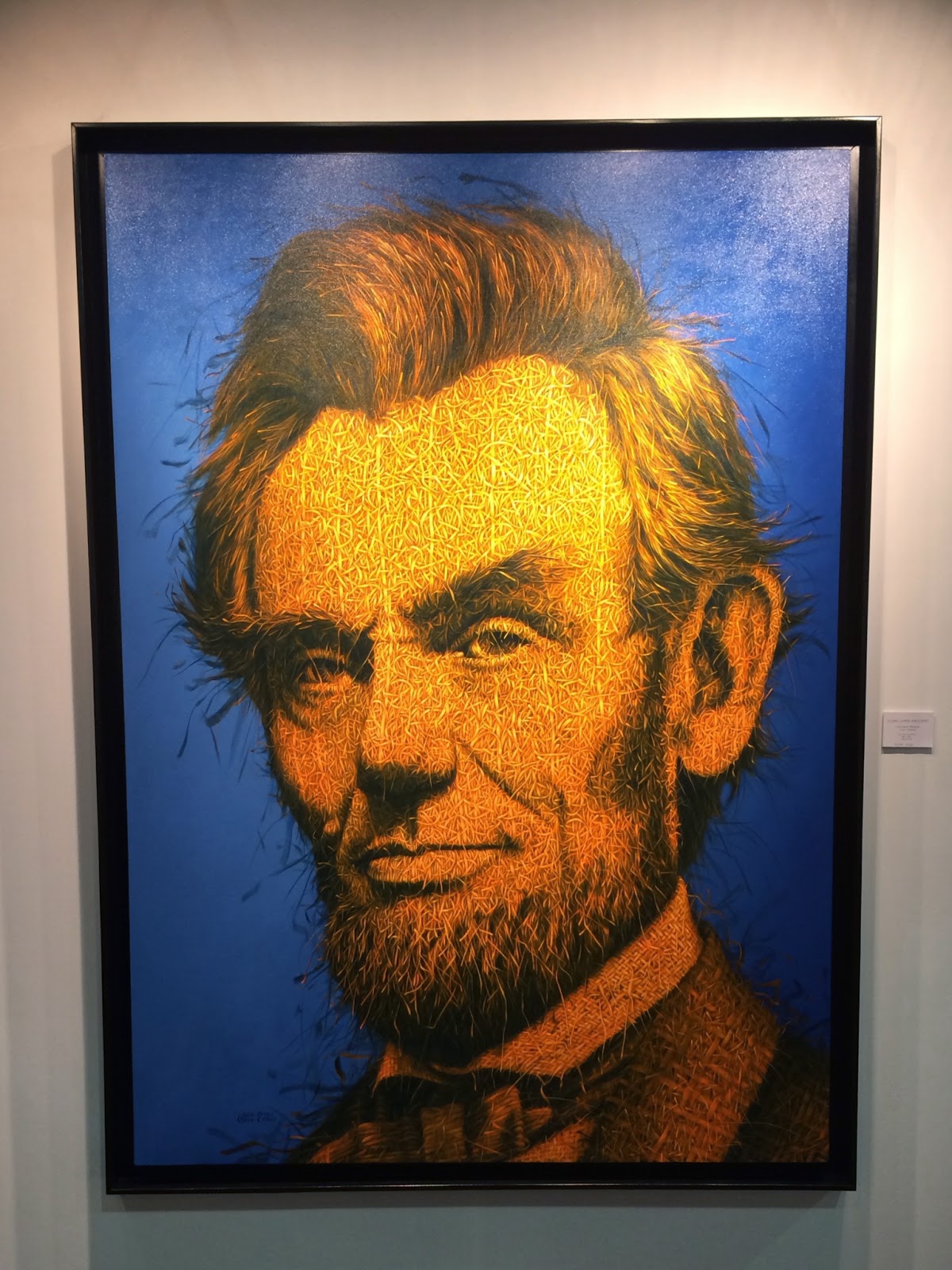 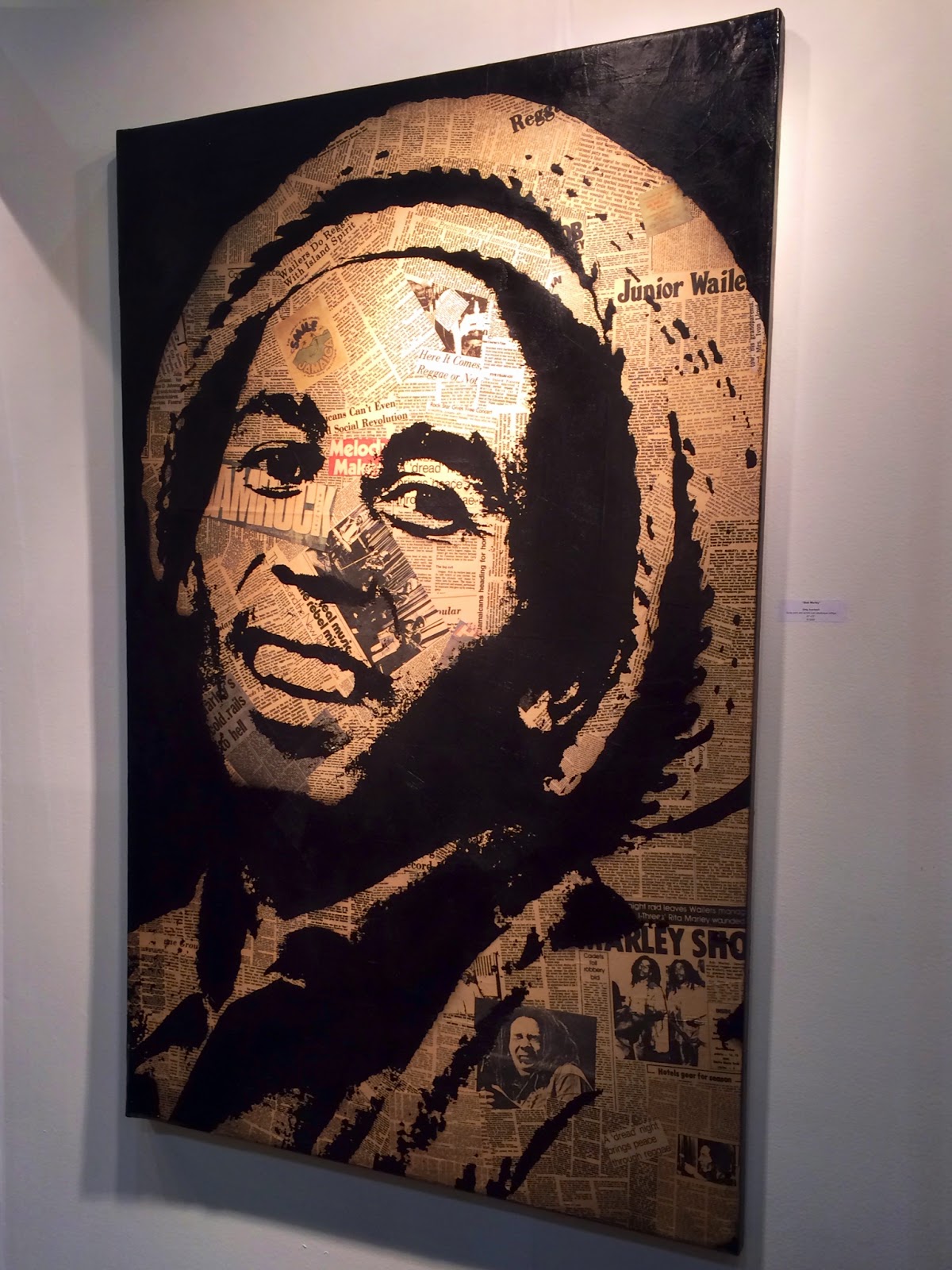 A great thing about the L.A. Art Show is that it features galleries from all over the world, not just L.A., so you're really getting a good sampling of what's going on in the art world in all corners of the planet (that can afford to get and be there, that is). A true highlight for me each year is seeing what's going on at our friend Noah Antieau's Red Truck Gallery ("Pretty, pretty art works") in New Orleans. A wonderful surprise this year was to find out that Antieau had curated a whole section of the show called Littletopia. It's NO surprise that it was the very best part of the whole thing. 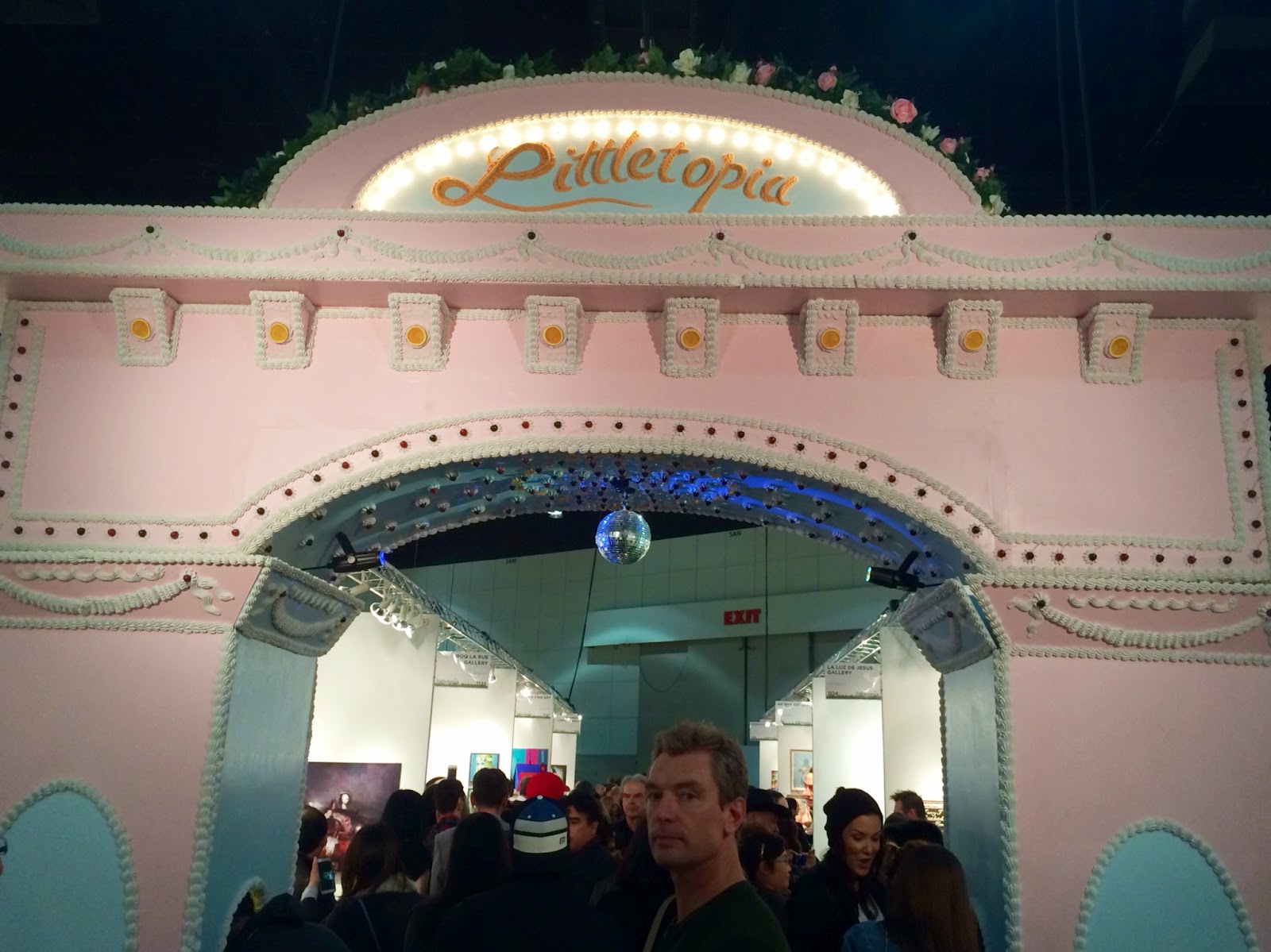 I was happy to see Antieau again, and extra-happy to see all the great things coming out of his gallery. 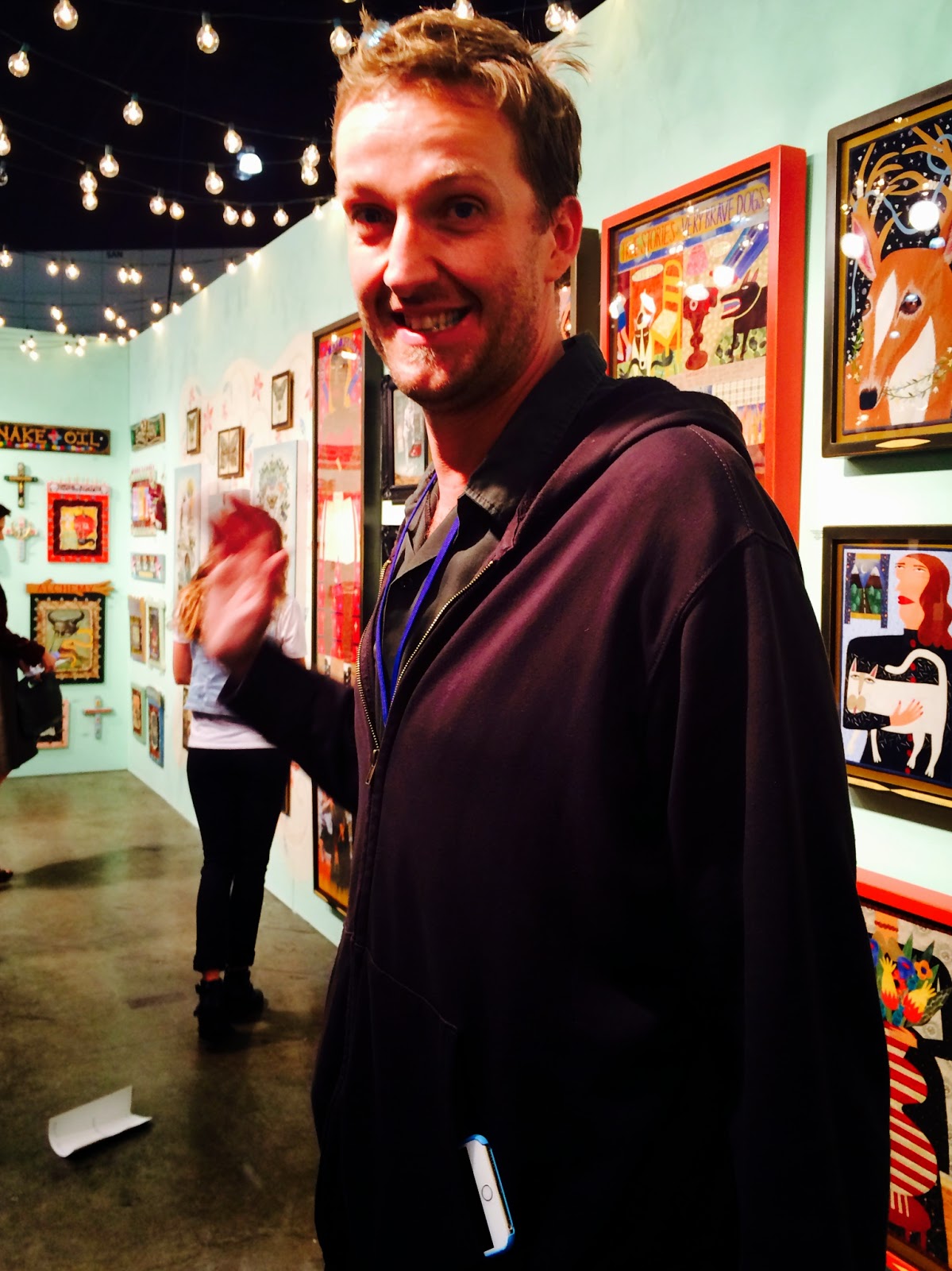 His Mother, Chris Roberts-Antieau is the real star of the booth to me. 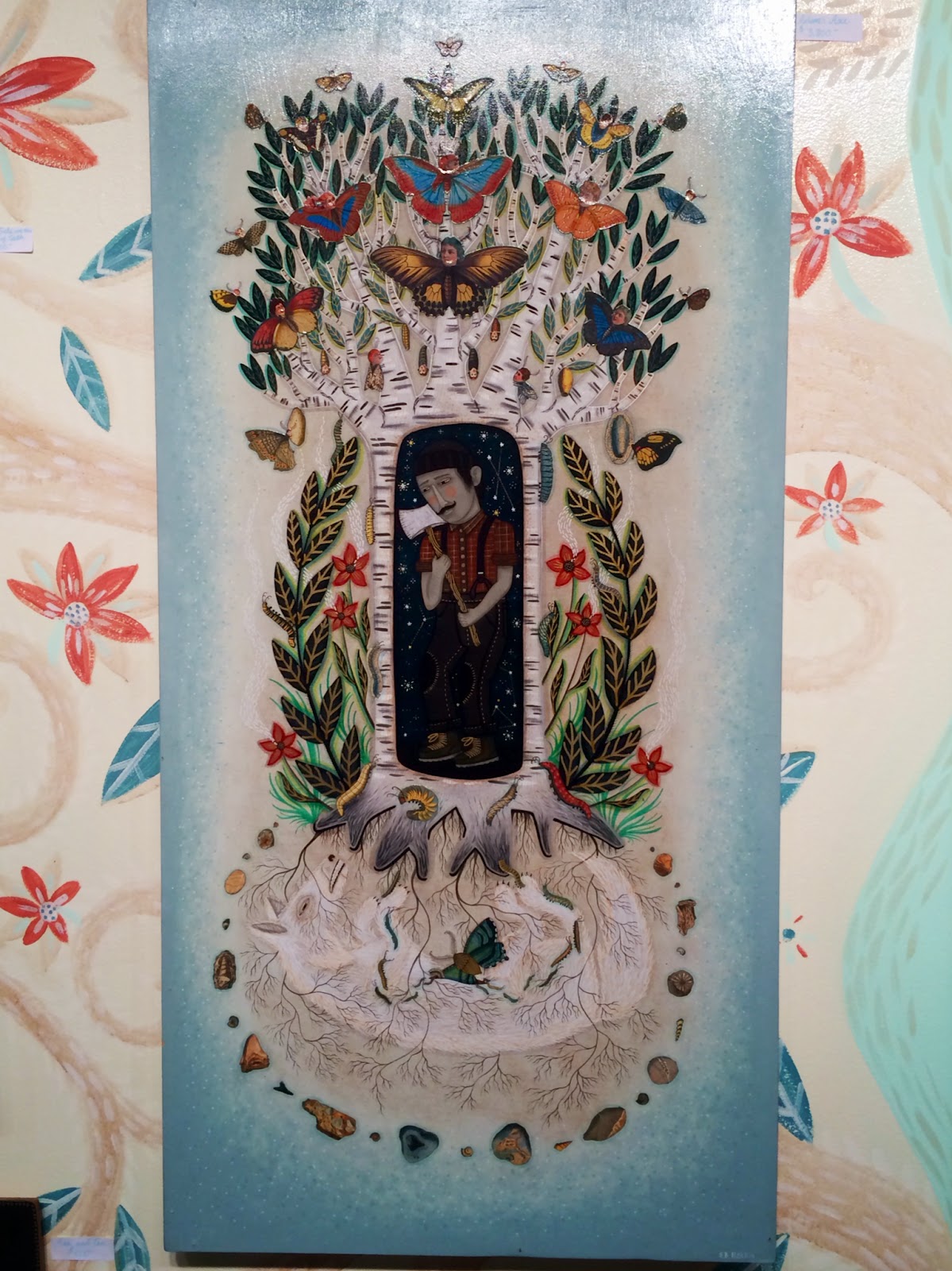 I love everything she does, from her wonderful quilts and folk art pieces ... 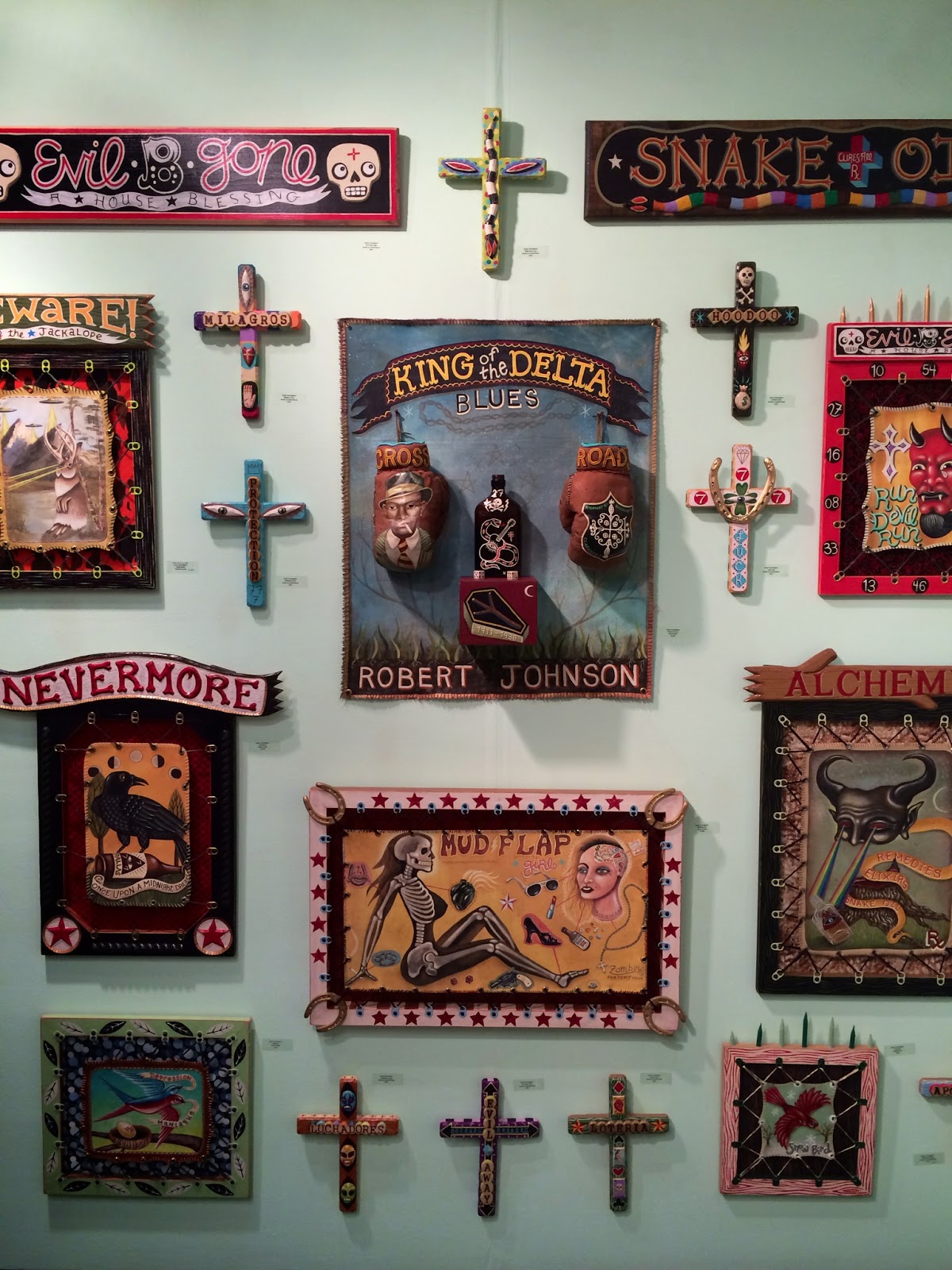 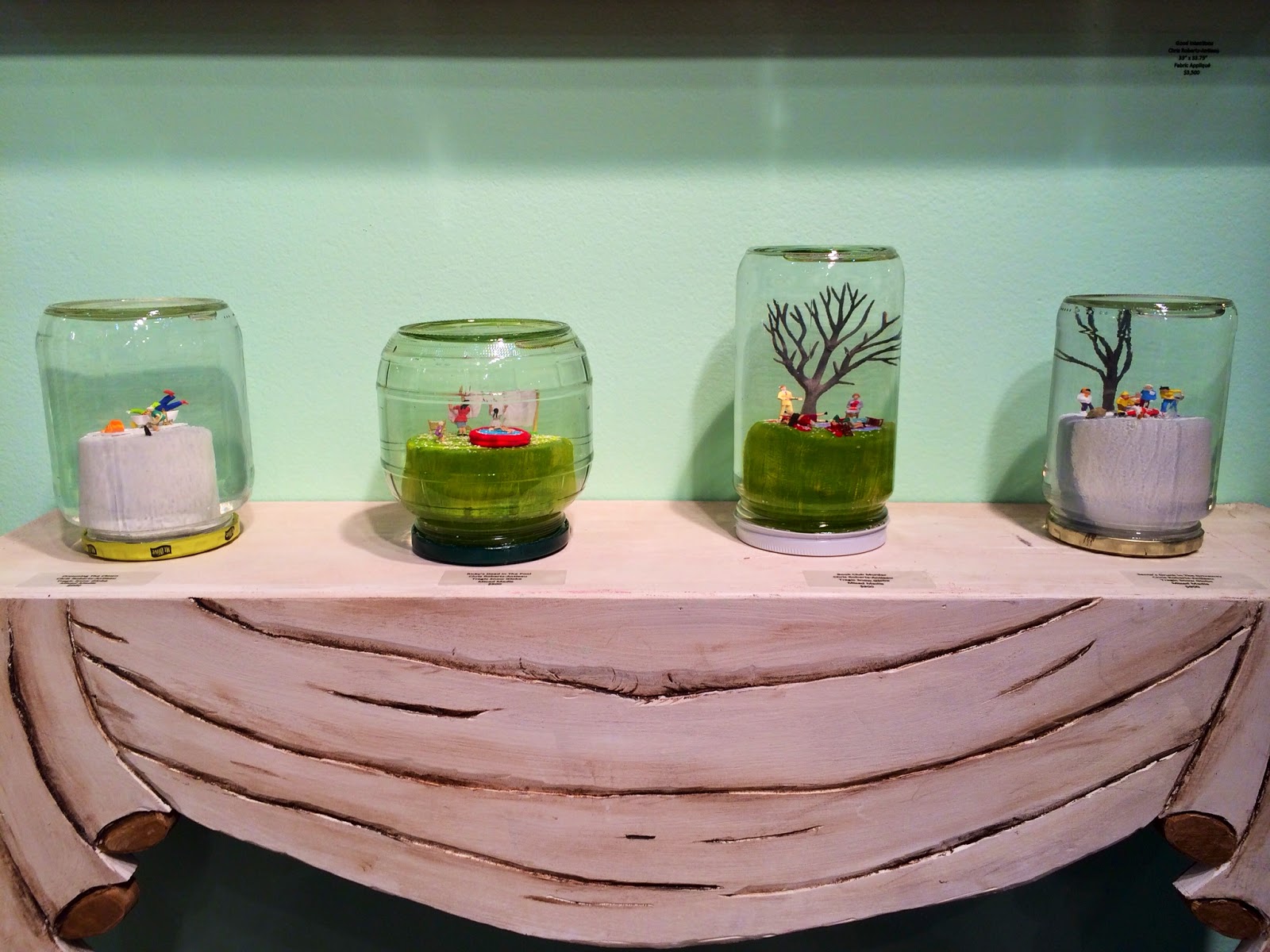 ... to one of the most beautiful dresses I've ever seen. It might be my favorite piece of the whole show, if I'm honest. 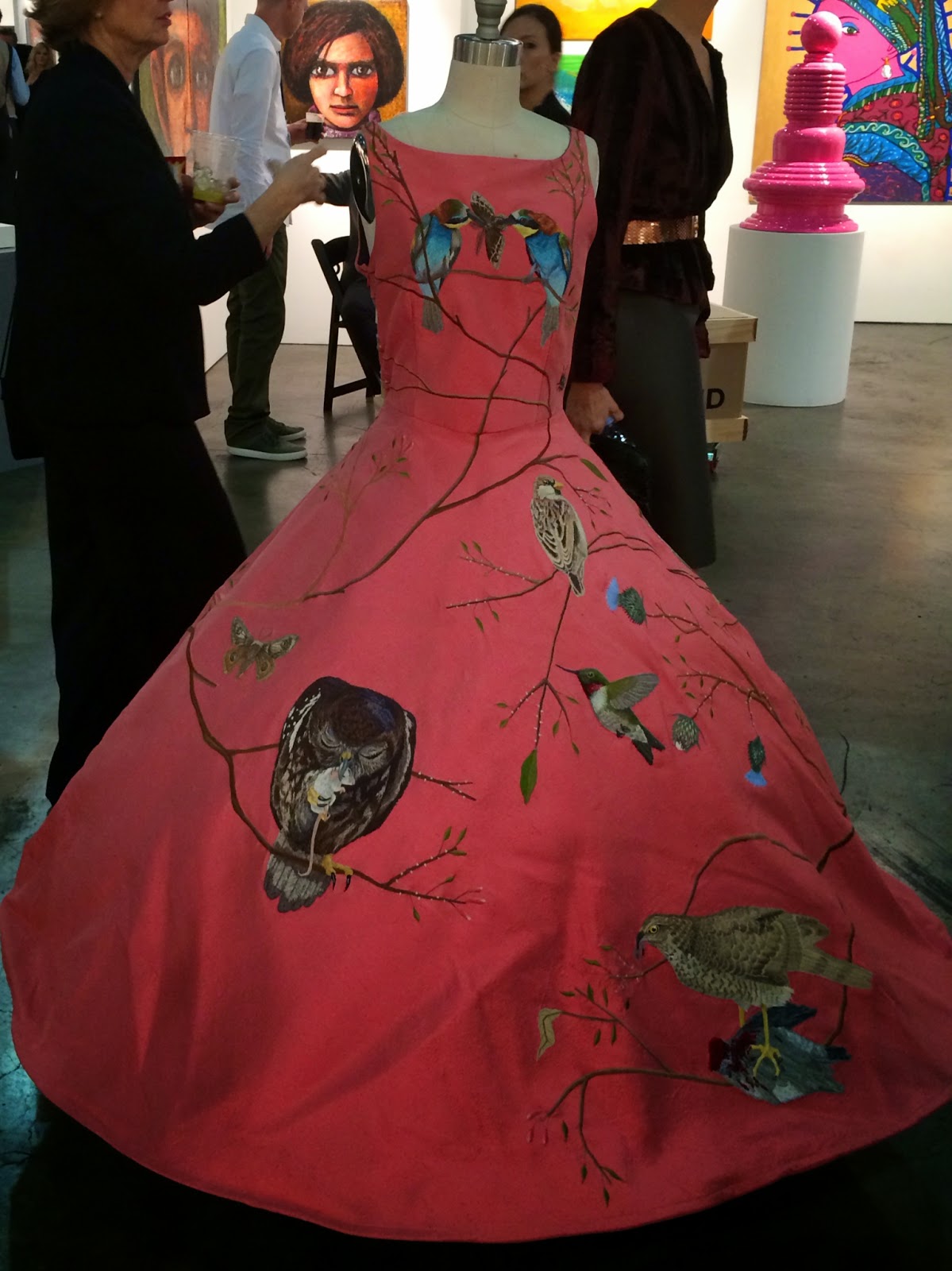 Red Truck is also the home gallery to Jason D'Aquino, who is a tattoo artist, that also does the most exquisite works - on the inside of matchbooks. Tiny. Talented! 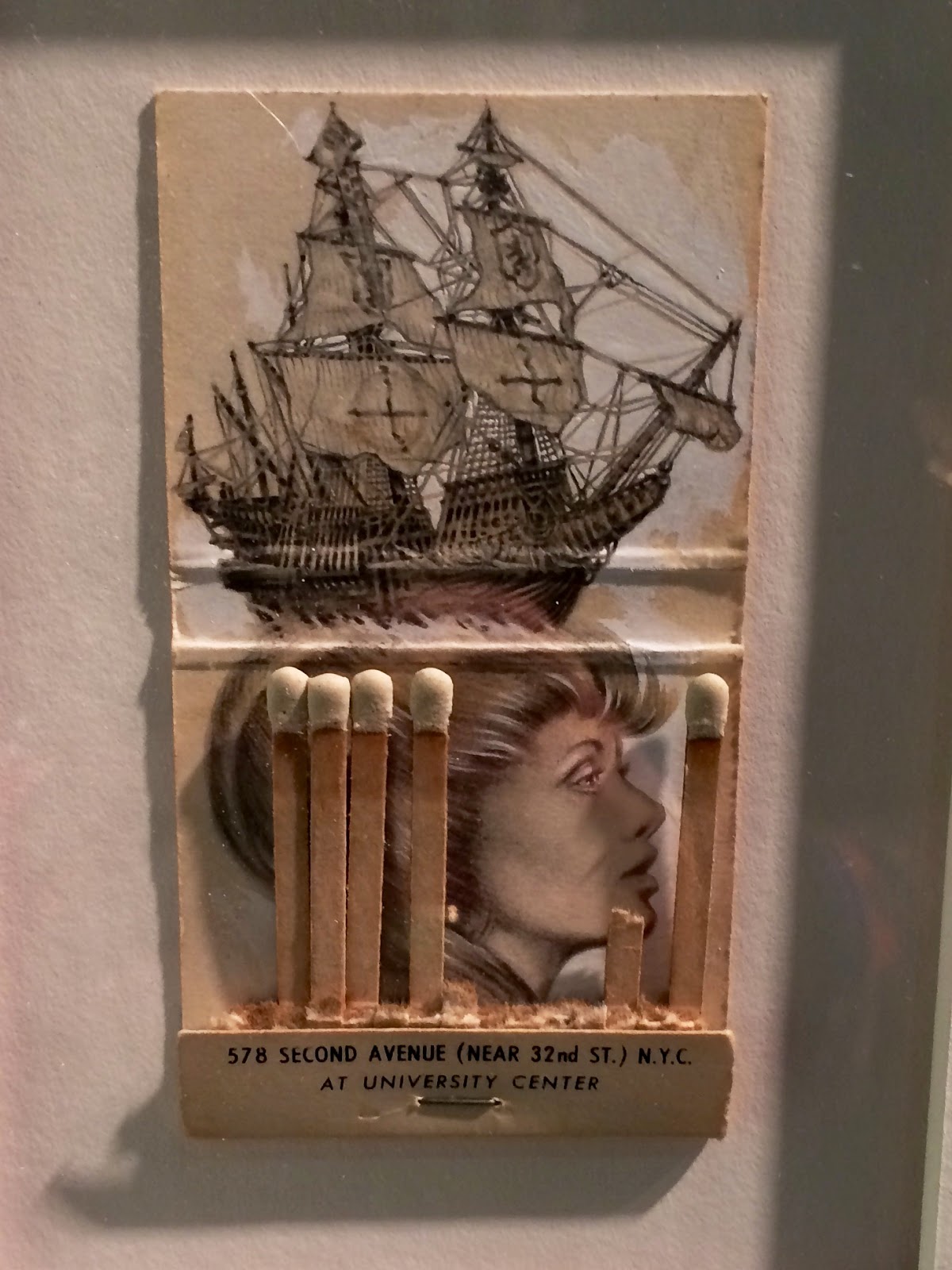 There is SO much talent, everywhere, that it's almost daunting. Like standing in front of the oil on steel piece by Young-Wook Han, that was just incredible and left you standing there going, "How in the world did they do that?! How are they human?!" 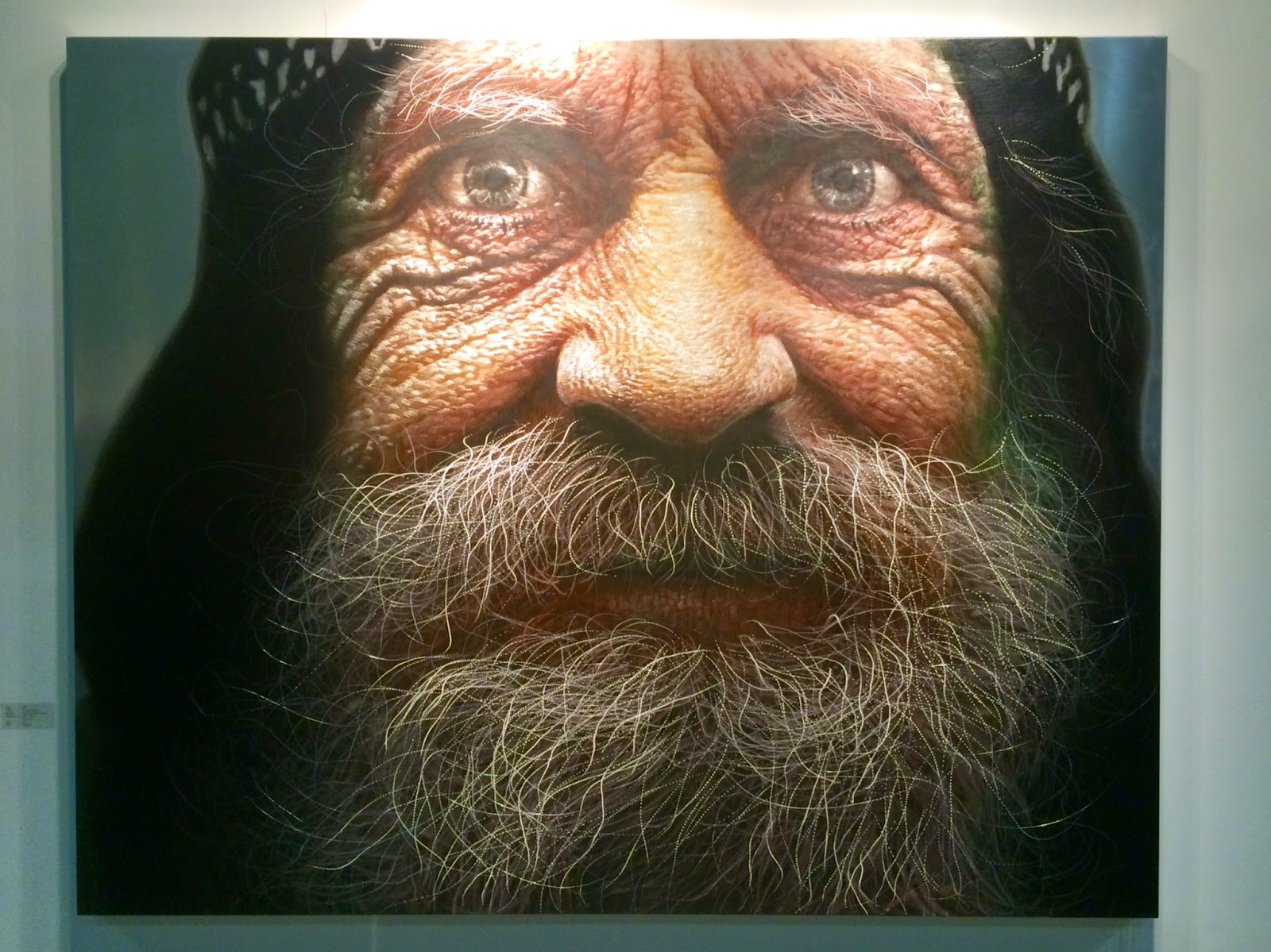 There are also plenty of works that made you say, "HOW much for that thing?!" and "My kid could totally do that." (To which John Waters famously answered, "Then they should.")

I found a lot of beautiful, feminine pieces this year too. In addition to Roberts-Antieau's splendid one, there seemed to be a trend of works on dresses, or works that reminded you of dresses ... 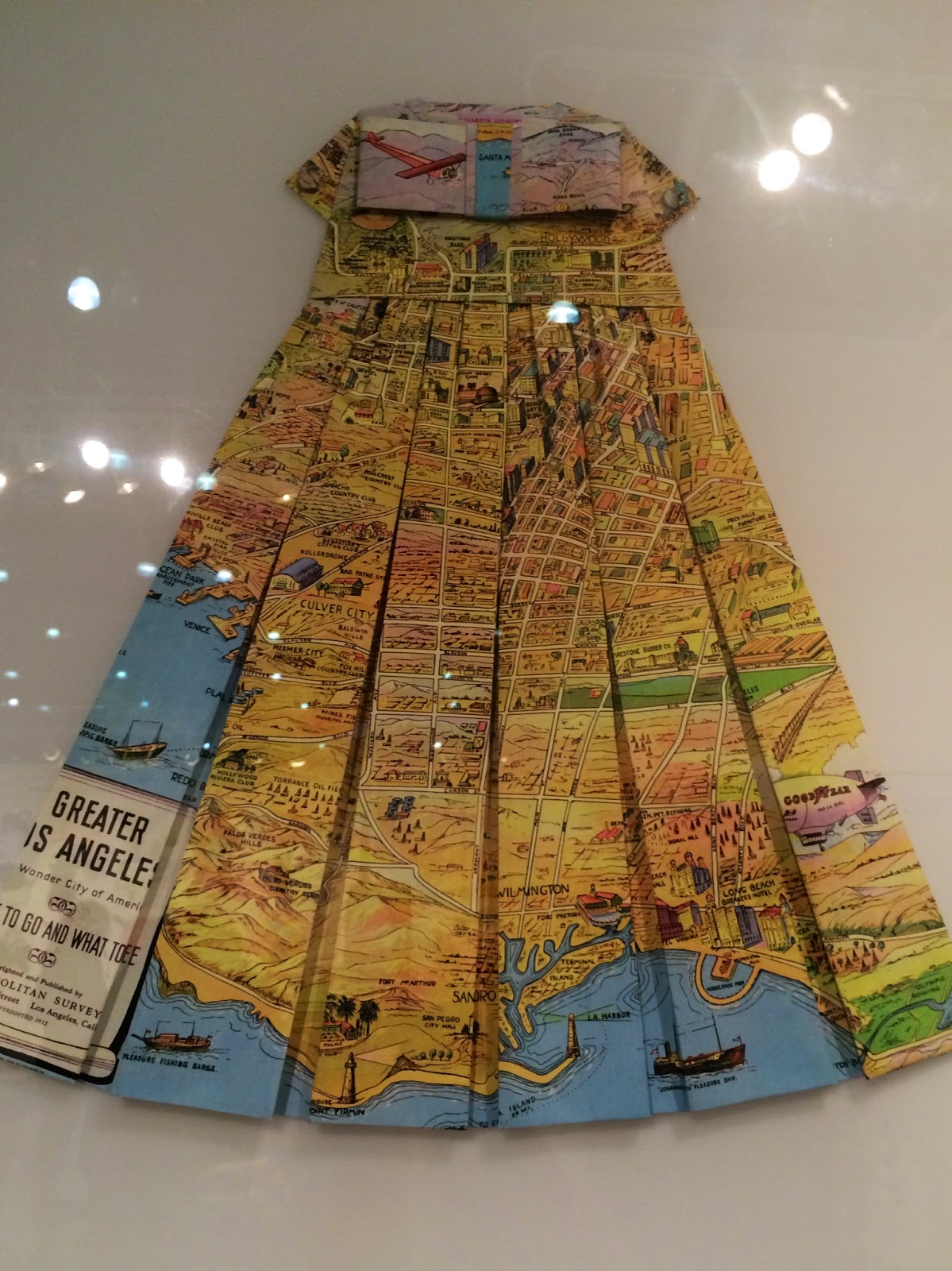 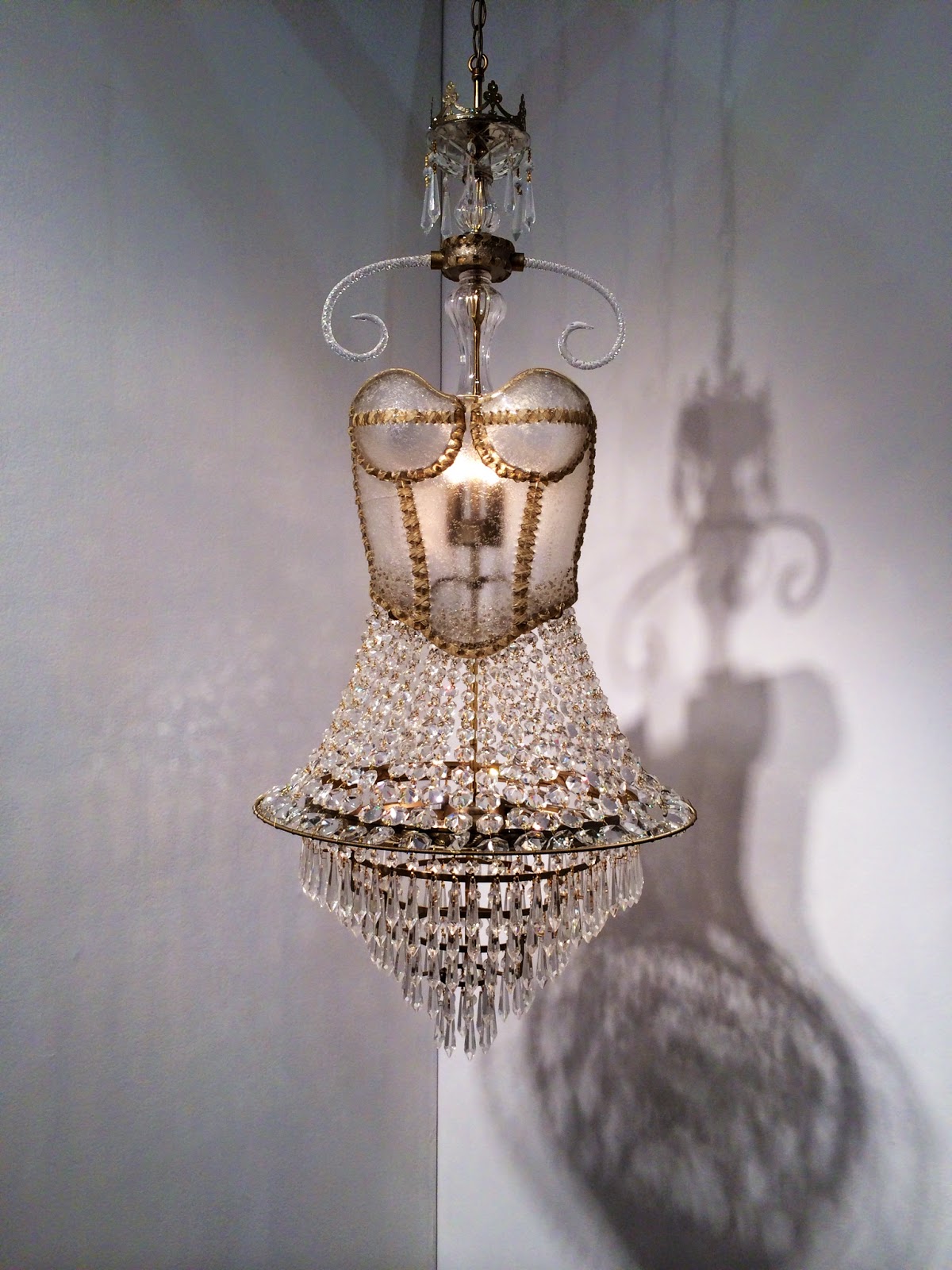 ... And gorgeous friends in gorgeous dresses too. 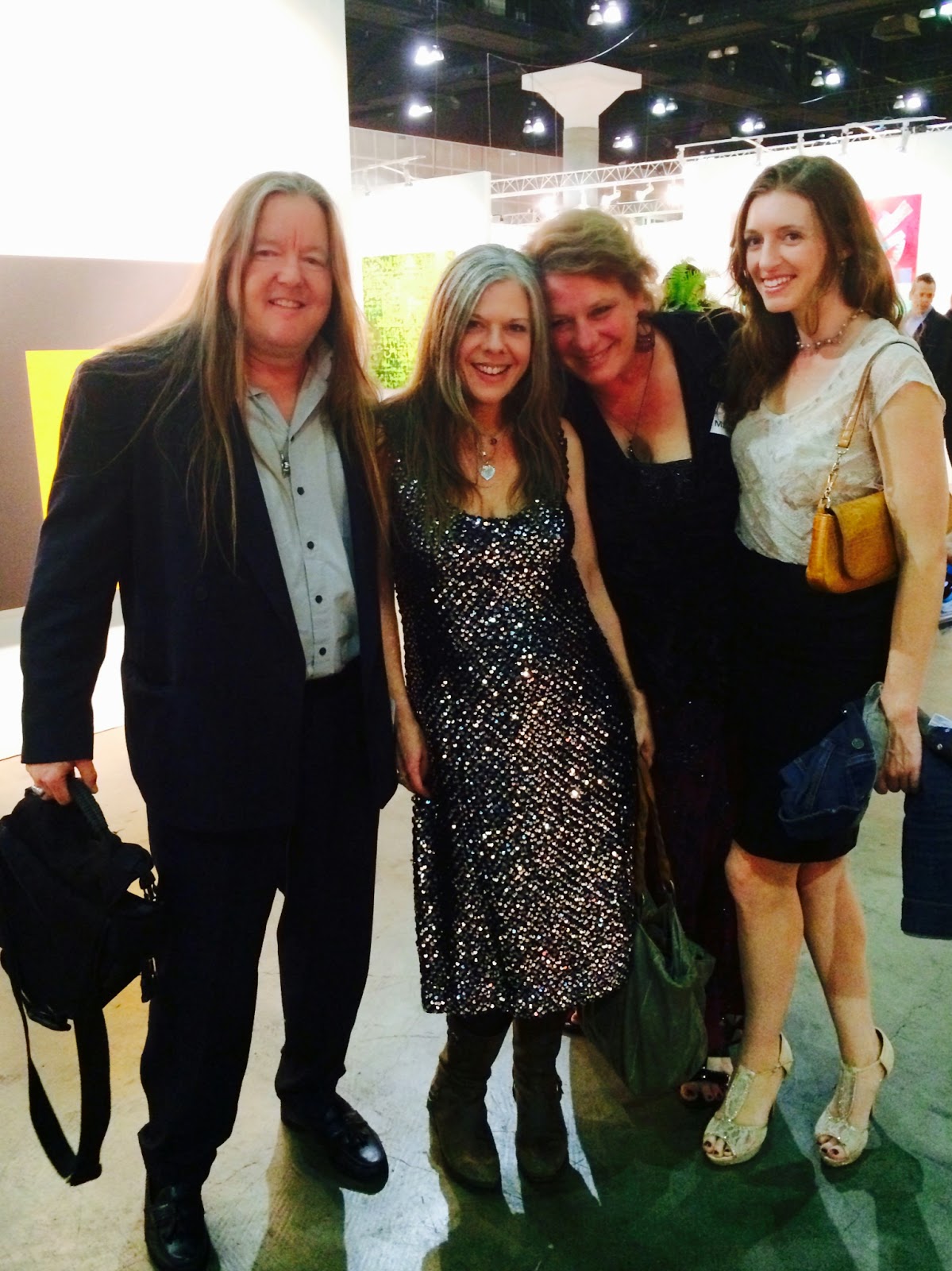 There were a lot of characters walking around all evening, some art installations themselves. Wild hair-dos, masks, crazy hats, sequins, and even a guy walking an armadillo (Fake. I think.) 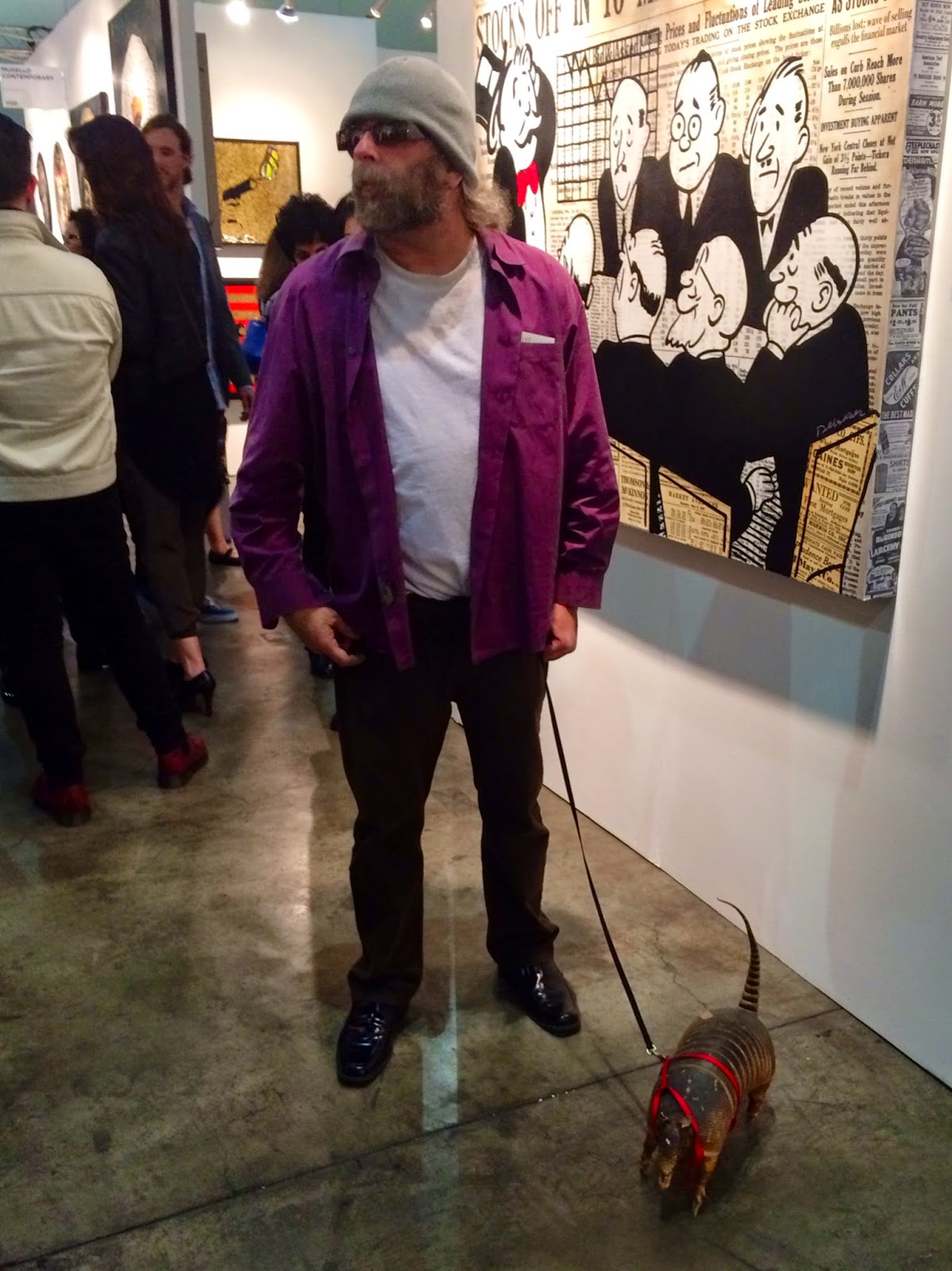 The opening party is pretty scenester, so you get folks like James Franco, Travis Barker and Amy Adams walking around, as well as the art world luminaries they were here to see, like David LaChappelle. 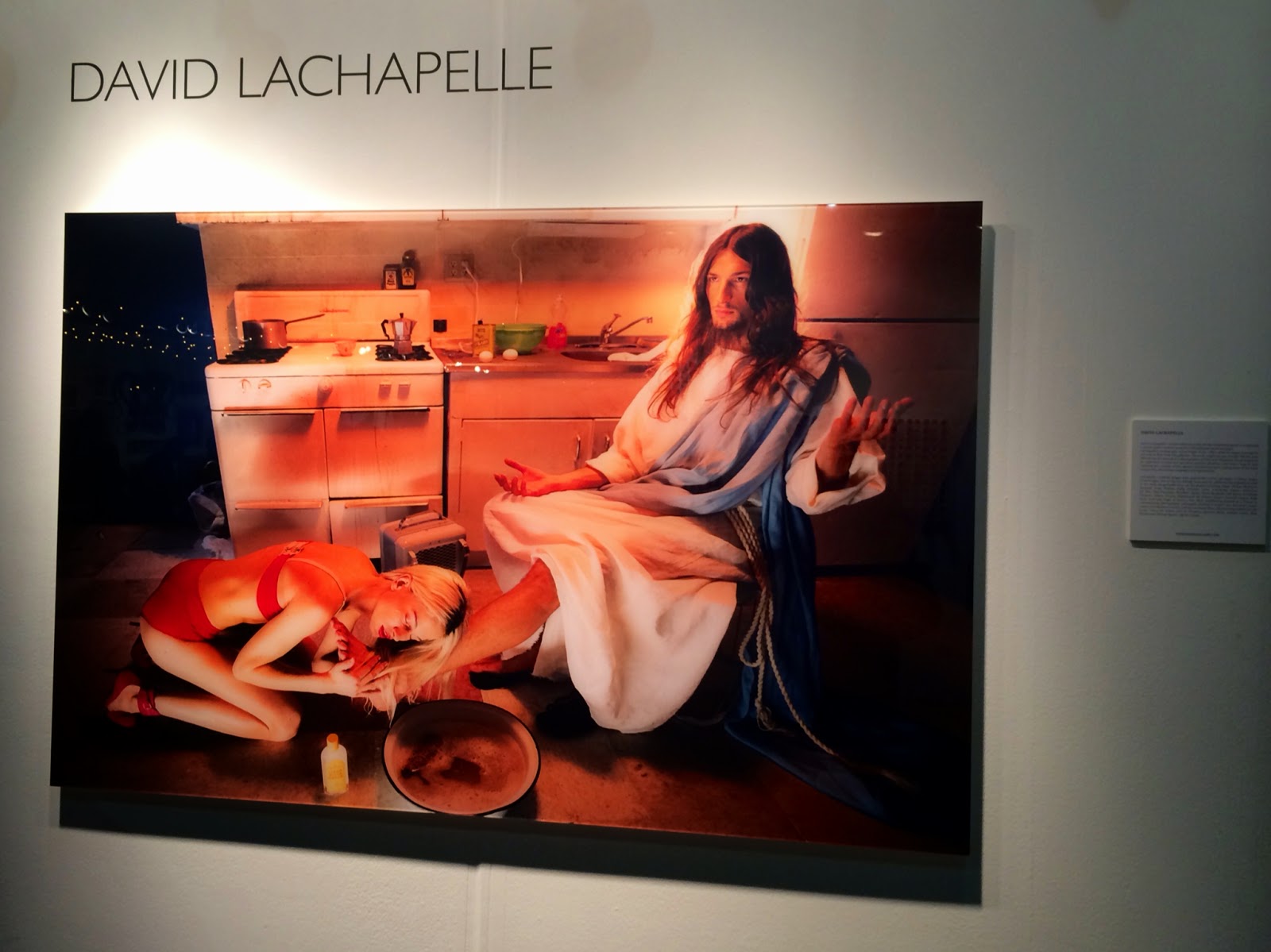 There was work by people I didn't even know were visual artists, like Bernie Taupin. 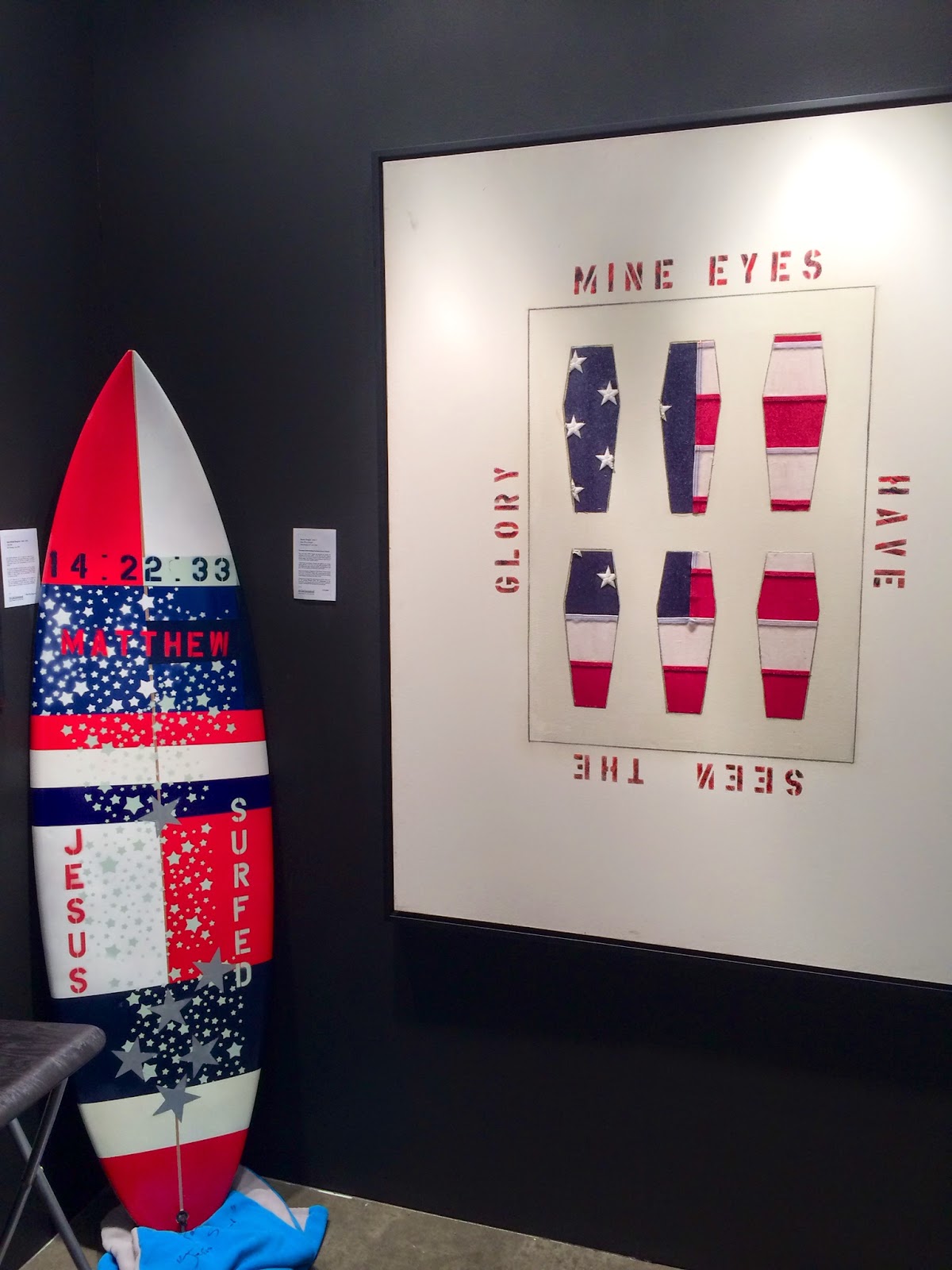 There was work that was overtly political, and for the People ... ... As well as things that were just beautiful to look at. 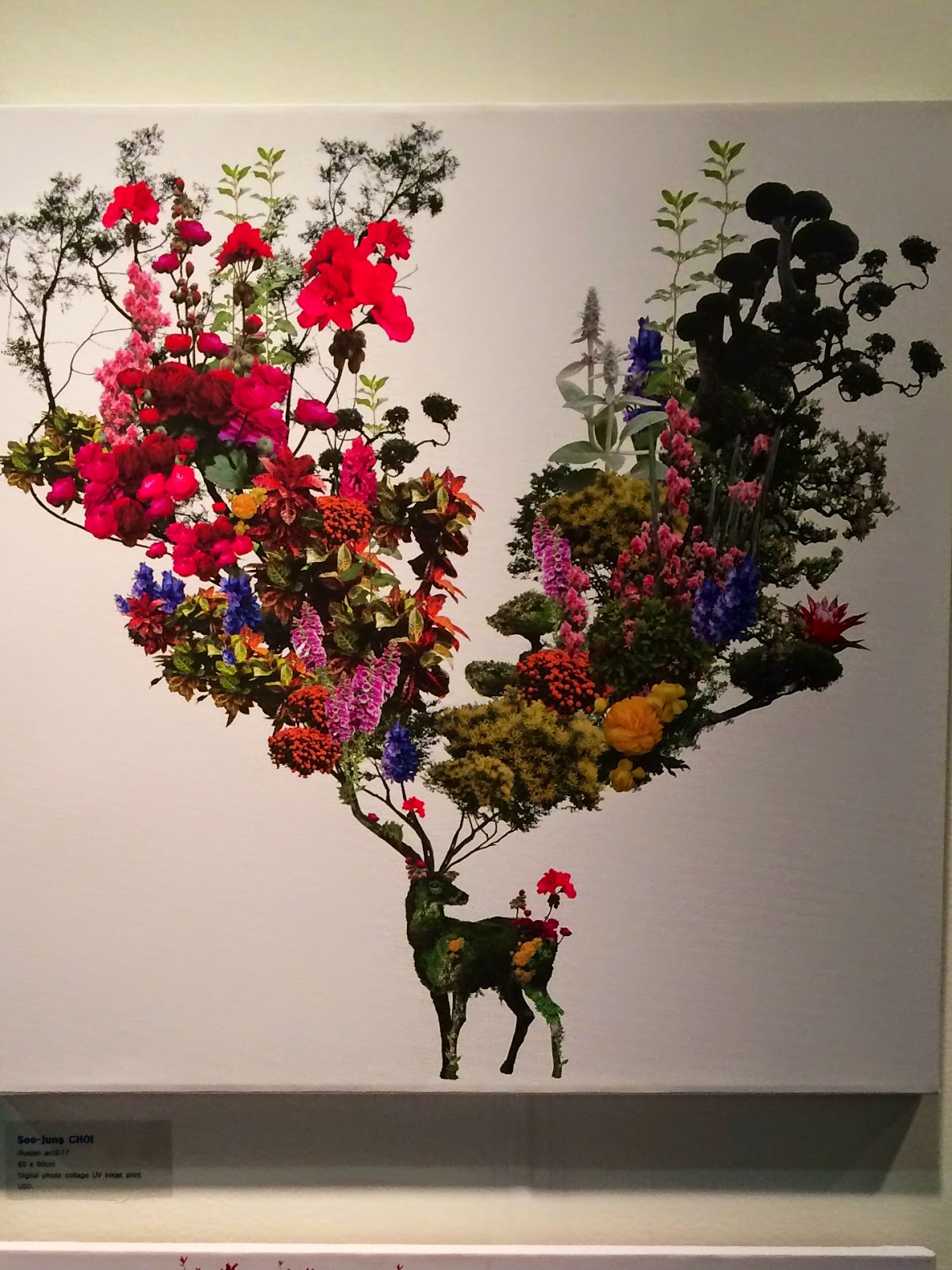 There were pieces to Save The Elephants ... 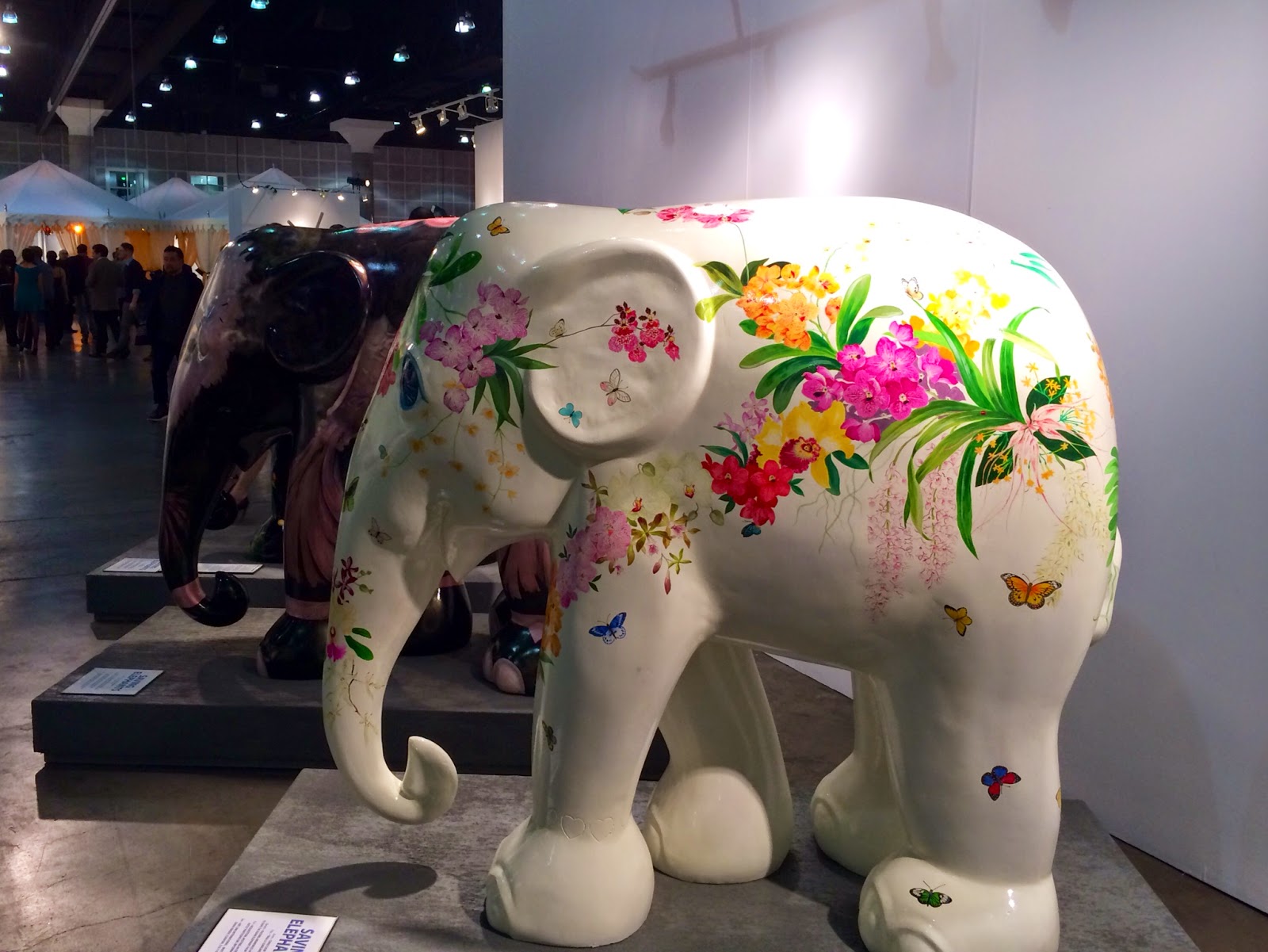 ... And pieces to save the Children. 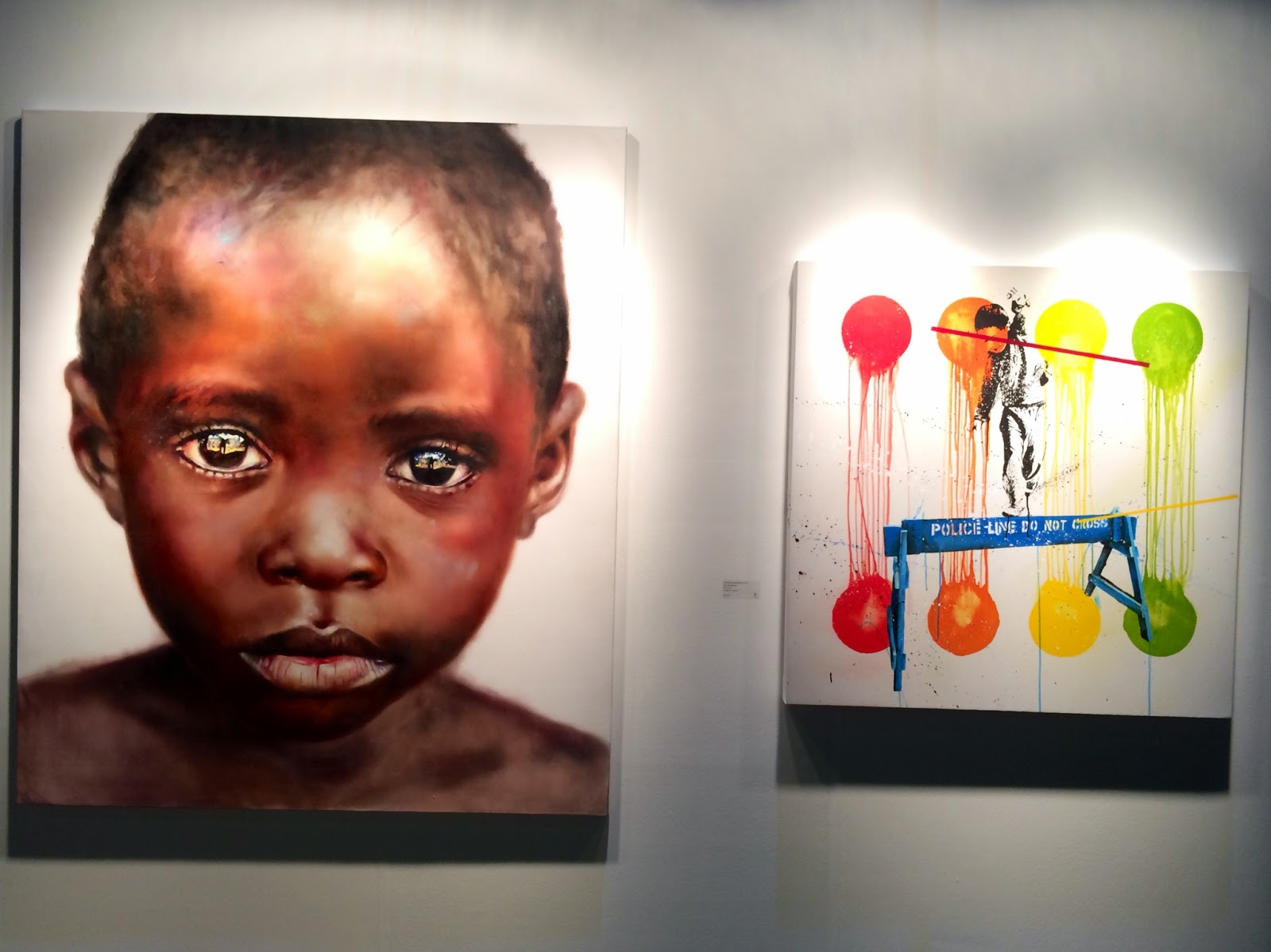 Most of all, there was a whole giant convention center of people coming together to celebrate Art. You can read all the lofty essays describing the artist's vision and intent, and those are great, but the bottom line is you like what you like, and how it makes you feel, or remember, or love. 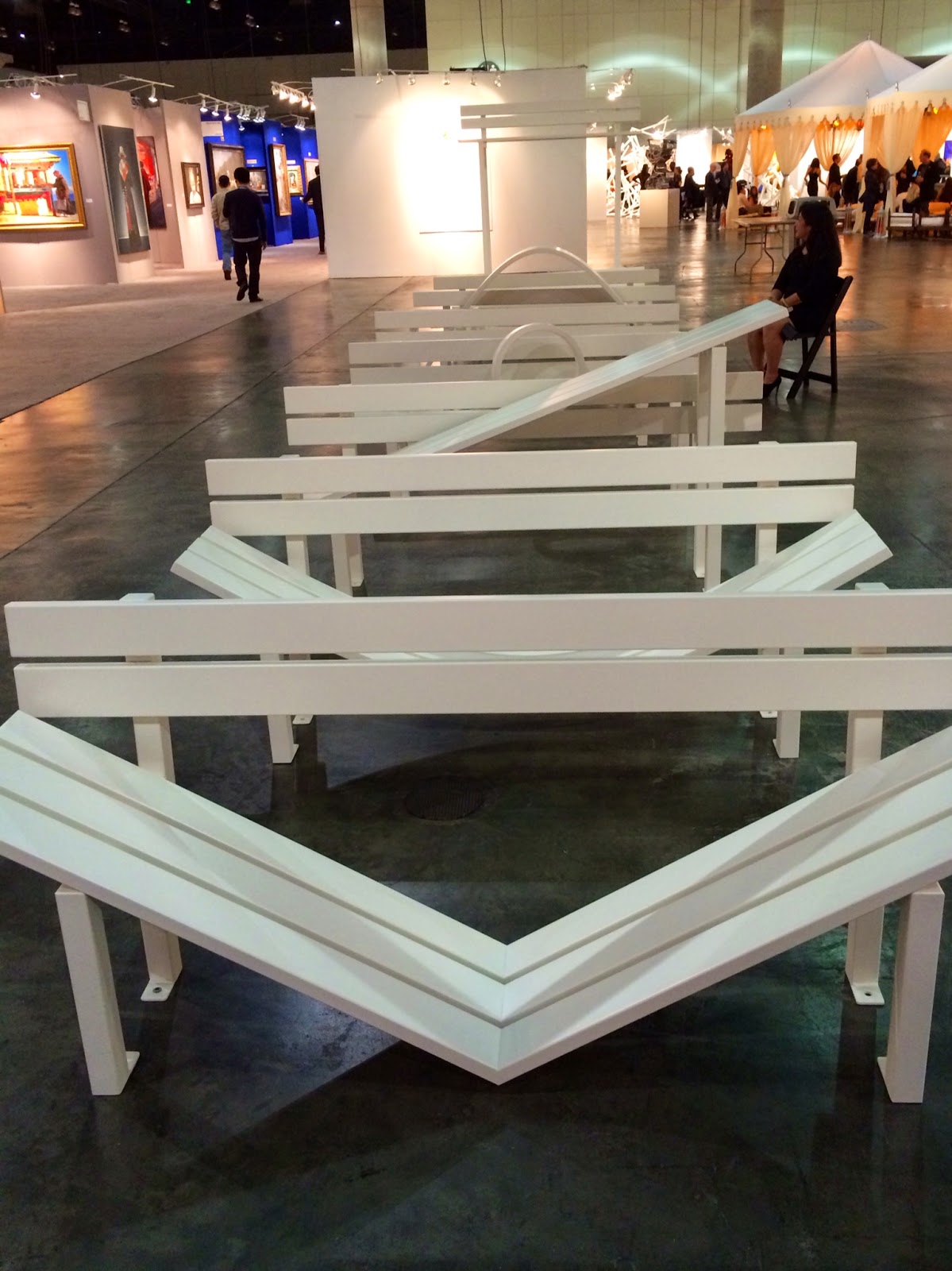 It's expression. It's what moves you. It's a racket. It's a business. It's a blast. It makes you think. It makes you smile. It provokes emotion and questions. It's Art.

And it will be there all weekend, as well as Photo LA (featuring the work of Paul Gronner in Booth #526!), next door at the LA Mart.