Venice lost one of the true O. G.s on August 15th, when Jay Adams, founding member of Dogtown's Z-Boys and skateboard legend, passed away from a heart attack at the age of 53. He was on a three month surf trip in Porto Escondido, Mexico with his wife, Tracy. Adams had just told Tracy that it was the trip of his life, catching all the best waves, being in love and at peace. He was very much looking forward to coming back and living his life as a man of God, and helping others to deal with drug and violence issues like he'd struggled with in his past. He wanted to be a positive force in the world. "He survived so many things to get to a place where he could help people," Tracy Adams told me. He had recently read her the Bible verse from 2 Timothy, 4:7, "I have fought the good fight, I have finished the race, I have kept the faith," as being very meaningful to him. Adams died in his sleep, a happy man, ripping apart waves right up until the end. What a way to go. 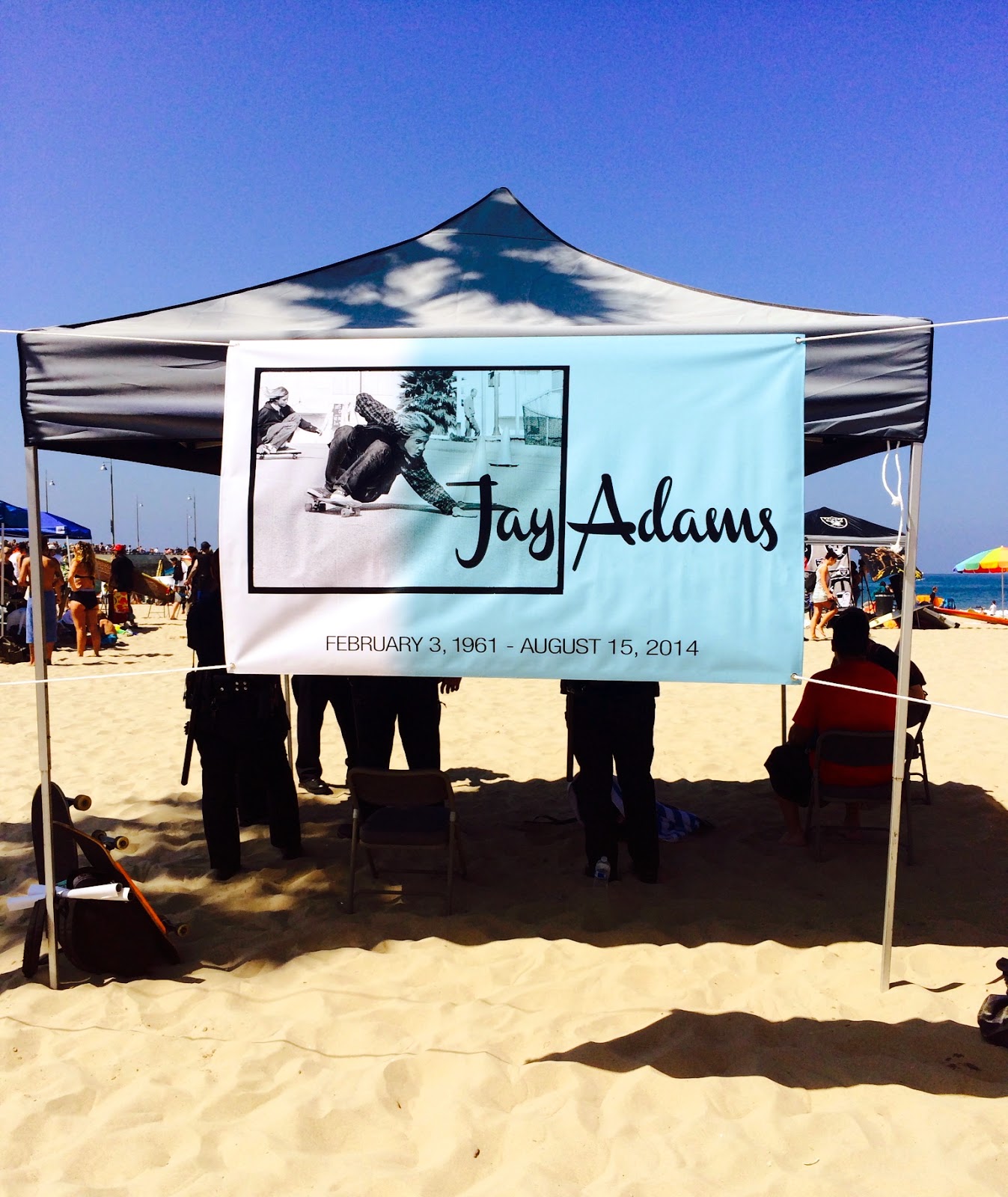 When Venice got word of Adams' passing, everyone came together. Lauren Wiley of the Venice Skate Alliance helped raise $14,000 in a matter of days to bring Adams back, cover funeral expenses, and help get Adams' ashes and family to Hawai'i, where half of them will be spread. The other half will stay in Venice, where Adams was born in the canals, and always returned to visit.

Venice really came together on August 30th, a perfectly beautiful day, and one that will long be remembered in our community. Generations united to celebrate the life of Jay Adams with a paddle out ceremony next to the Venice Pier. It looked like a surf contest, with tents set up, a band playing, tropical flowers everywhere, friends and family members tailgating, and even a pot-luck bbq set up on tables in the sand. 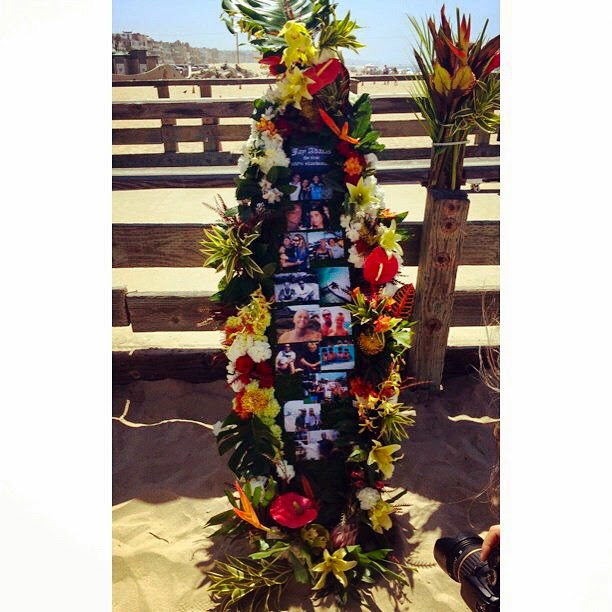 Flower arrangements, banners and memorial surfboards made the occasion clear, and hundreds of people filled the sand and lined the pier to pay their respects to one of the men who not only helped keep skateboarding alive, but changed it forever with his smooth, surf style. 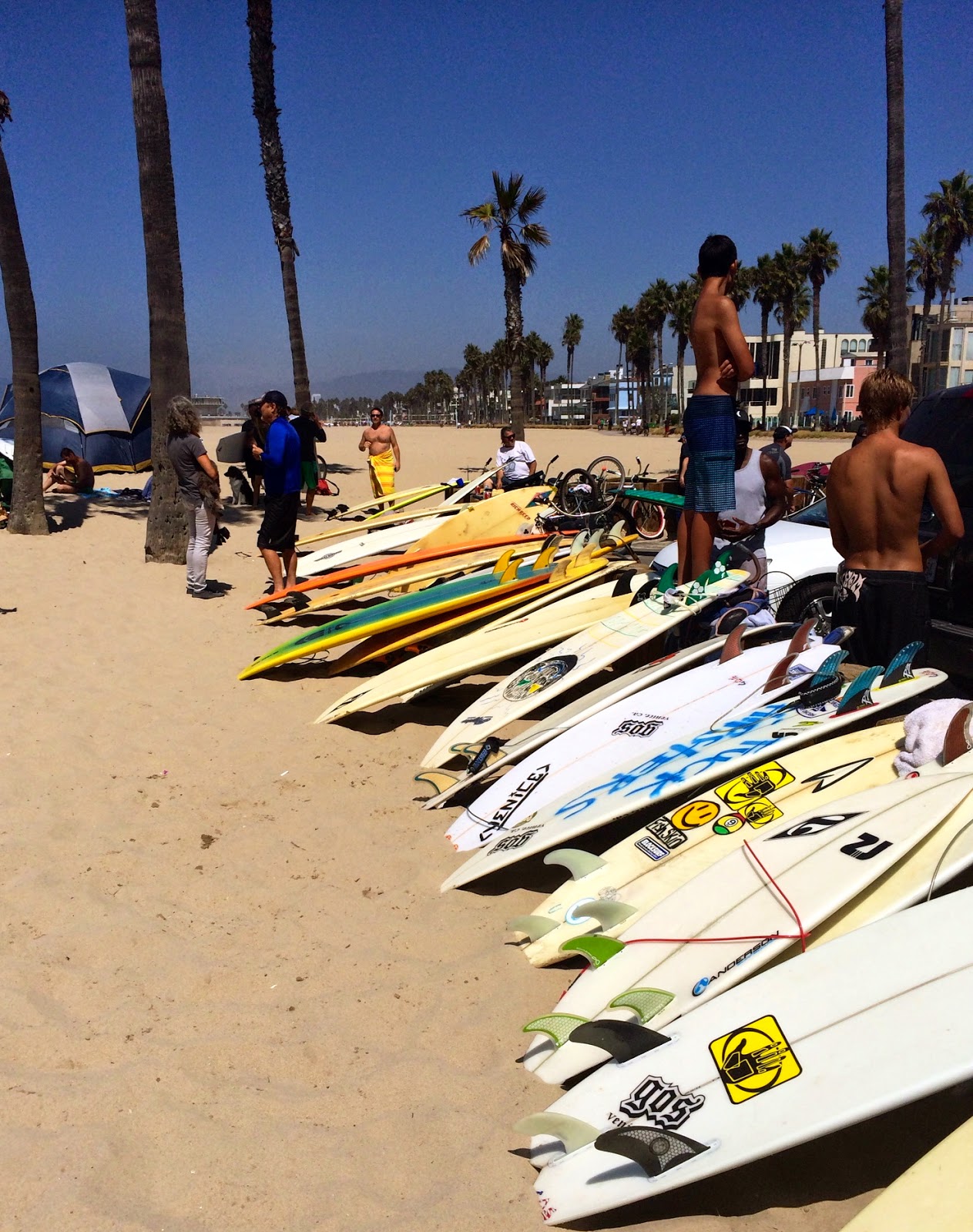 Old friends reconnected, new friends were made. It was a giant Venice family reunion, with both those who left a long time ago, but always kept it in their heart, to those who will never leave and are doing everything they can to hold on to the feeling of community like was felt on the sand that day. As Wiley said, "Look around. The spirit of Venice is not dead." Not even close. 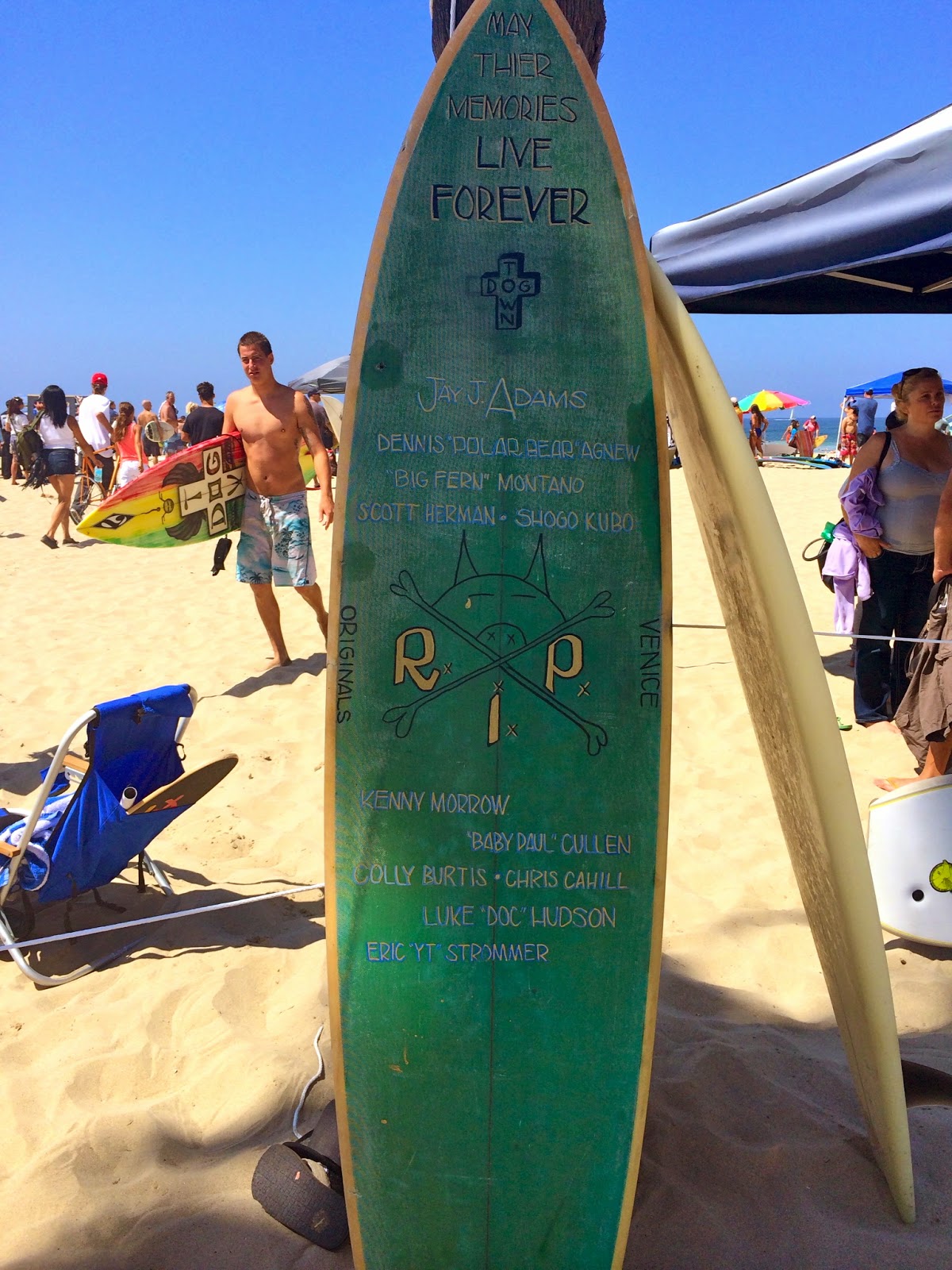 Adams will always live on as well, as pro skater and keeper of the Venice Skate Park, Jesse Martinez, told me, "If someone is skateboarding, Jay lives. Kids skating today don't realize, Jay Adams had a big part in everything they're doing today. He set me on the path to literally change my life through skateboarding ... and it changed skateboarding forever." All day long I heard stories being told about Adams and the wild and crazy times that were had with him. Martinez continued, "If Jay was your friend, you were in for a ride. You were privileged to have time with him. It sounds like a broken record, because everyone you talk to will say the same thing ... there was just something about Jay. He stood out. He had a unique aura that he carried with him ... life put him through ten rounds and chicks still loved him!" A kid approached Martinez at the skatepark and told him he was sorry he lost his friend. Martinez replied, "No, WE lost Jay. We all lost a friend." 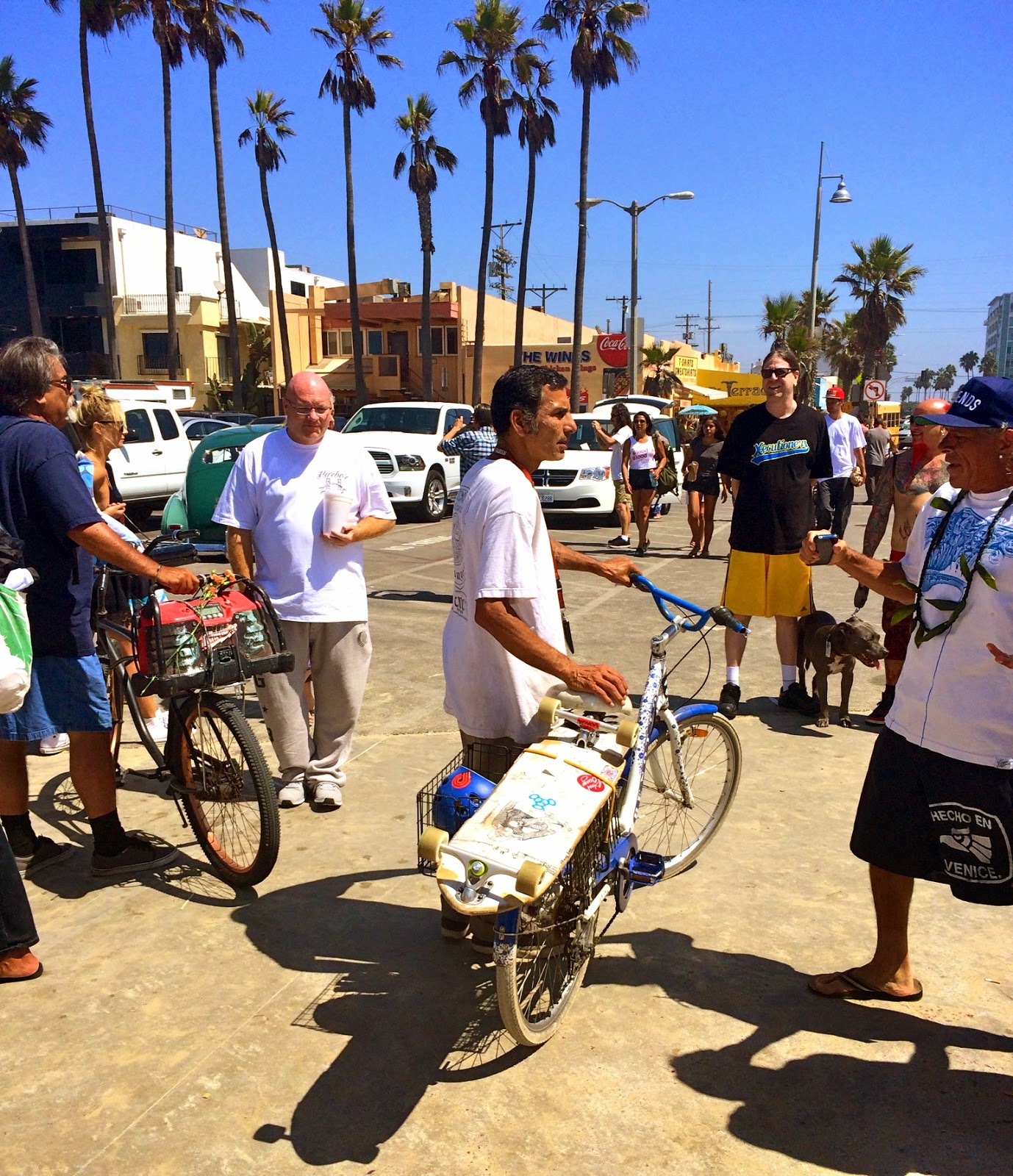 That was the common refrain of the day... "I haven't seen you in forever, Bro!" "Yeah, I had to come. Jay was like a brother to me." "He was a brother to all of us." Which is what Seven Adams, Jay's son, told me. "By having his fatherhood, I got a brotherhood." That was clear all day, as hugs and respect were exchanged, and you know these guys will be looking out for Jay's son (and daughter, Venice) always. 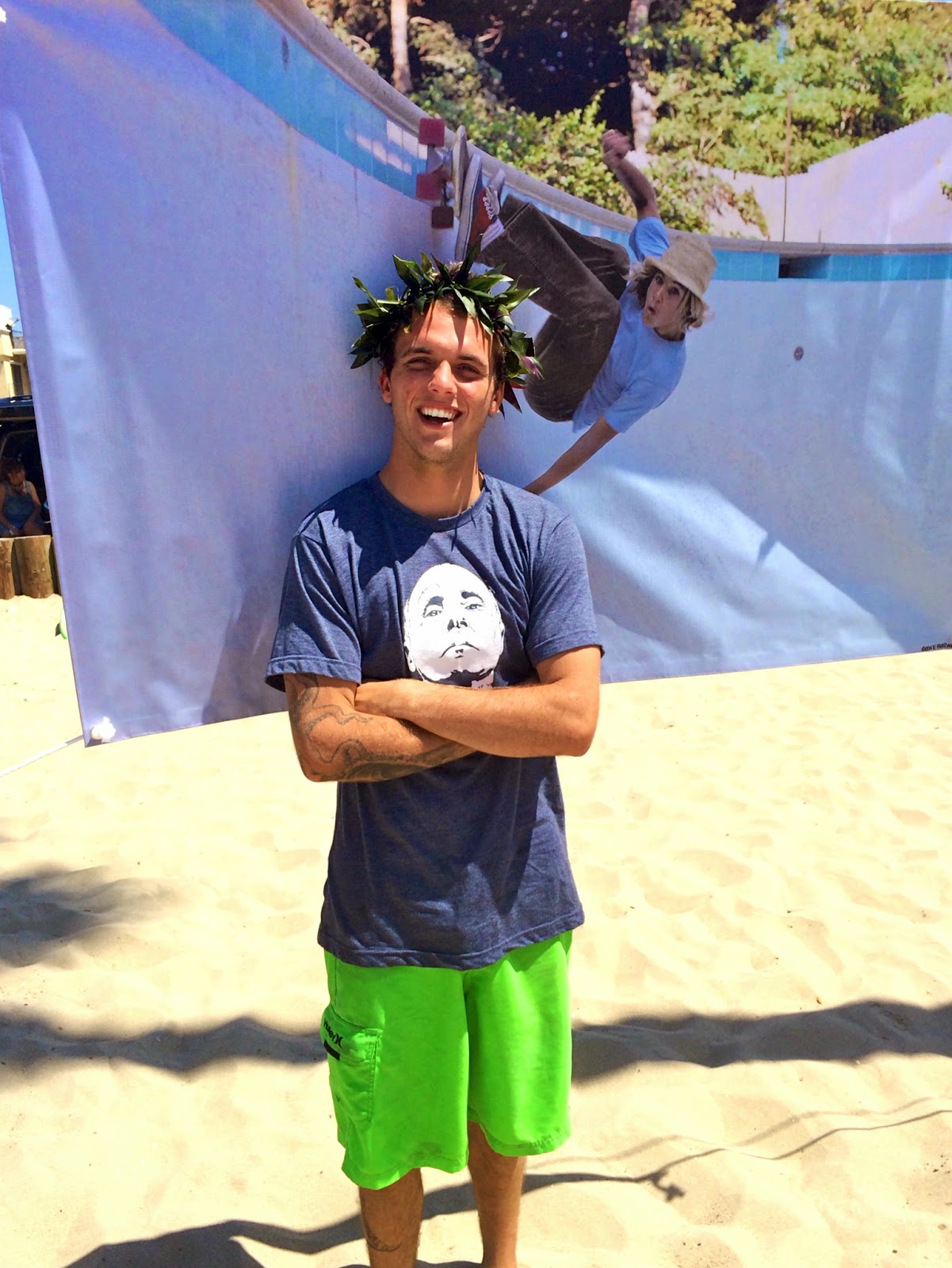 "My Dad taught me how to treat people, he'd give you the shirt off his back. When someone told me that, I ripped my shirt off coming off the plane, and gave it to someone." A charming and happy kid, Seven told me that, "I just want people to remember how rad my Dad was, that he was just raw stoke. He went hard at everything ... I know that he was one of the luckiest people alive, because he was stoked every day. Everyone has so much love for him, it's been amazing." 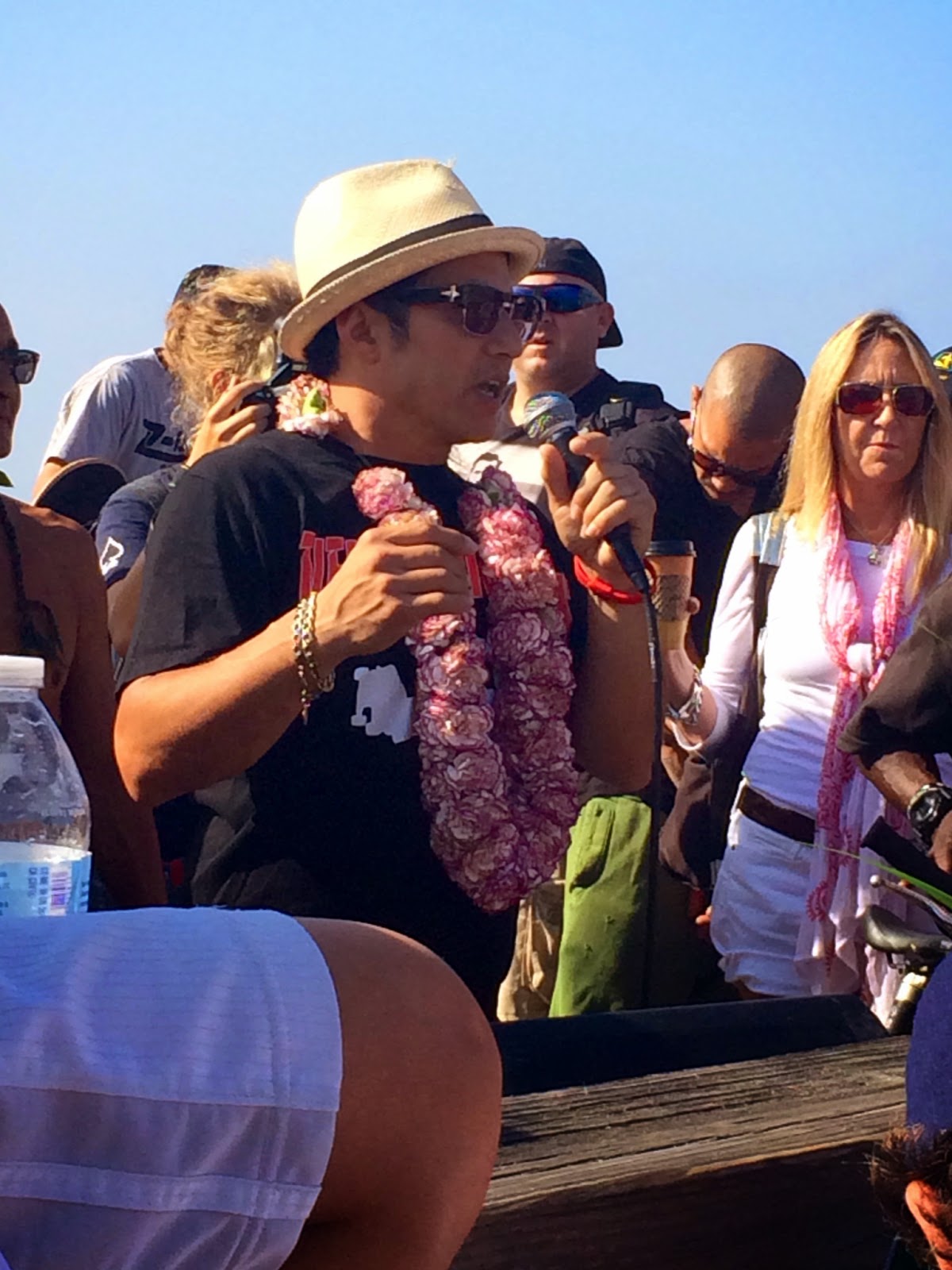 It really was amazing, as after a bit of eulogizing by pro skater, Christian Hosoi ("A perfect day, Jay would be so stoked .... Let's all get together, not just at memorials, but to celebrate us being alive and being together ... Amen?!" Amen.), everyone paddled out into the ocean north of the Venice Pier, where even the lifeguard boat paid their respects with a giant spout of water and horns blaring. 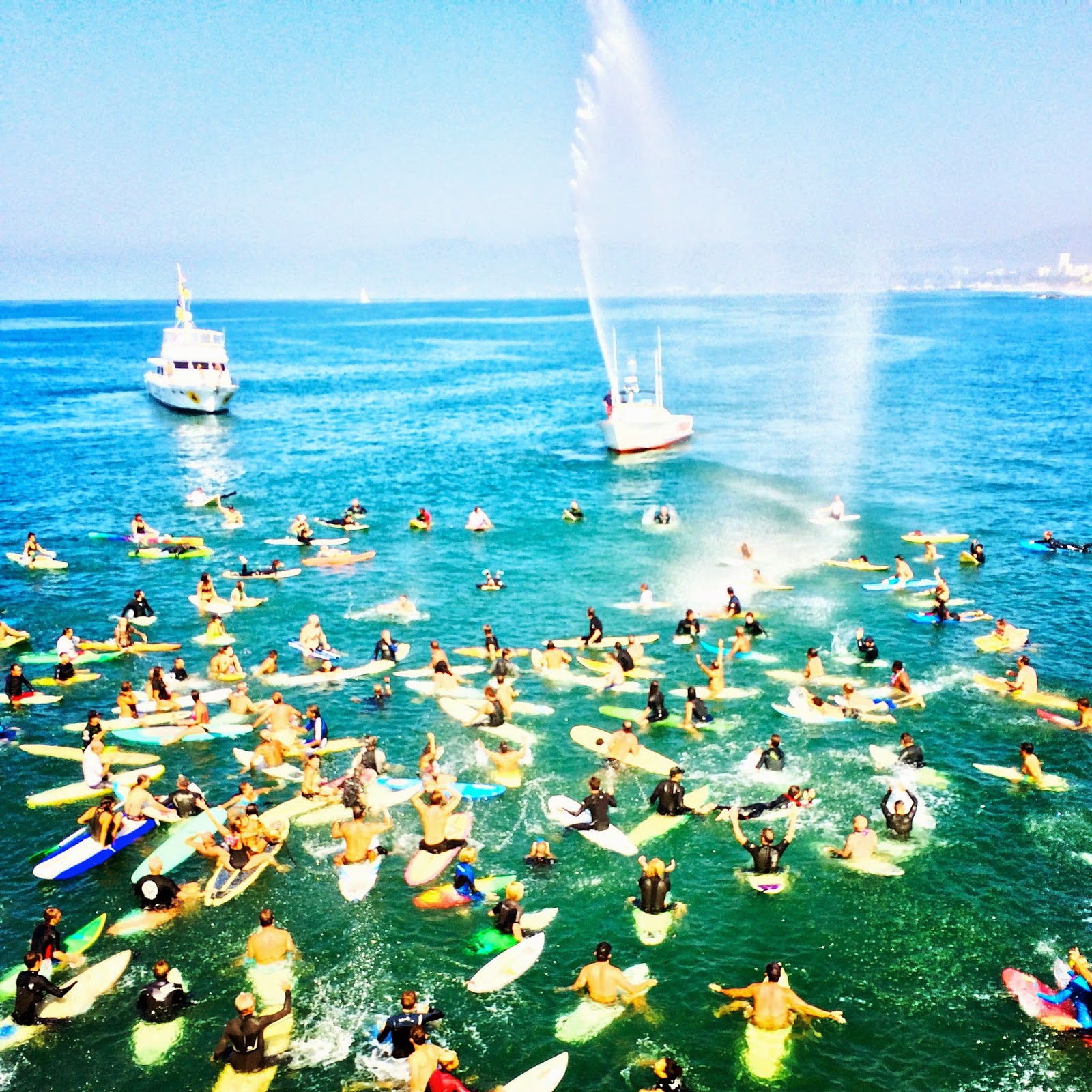 Flower petals were scattered down into the water as all the surfers shouted and slapped the water, bringing both chills and tears to the eyes. Adams was again eulogized by friends in the water and by his Pastor from Calvary Chapel in Santa Ana ("Welcome to Venice, Pastor!"), where his memorial service had been held the day before. It wasn't easy to hear from up above on the pier, but I could make out a guy in the middle yelling, "Jay was 100%! 100% Skater, 100% Surfer, 100% Man of God, 100% Inspiration!" and everyone yelled and splashed the water some more. 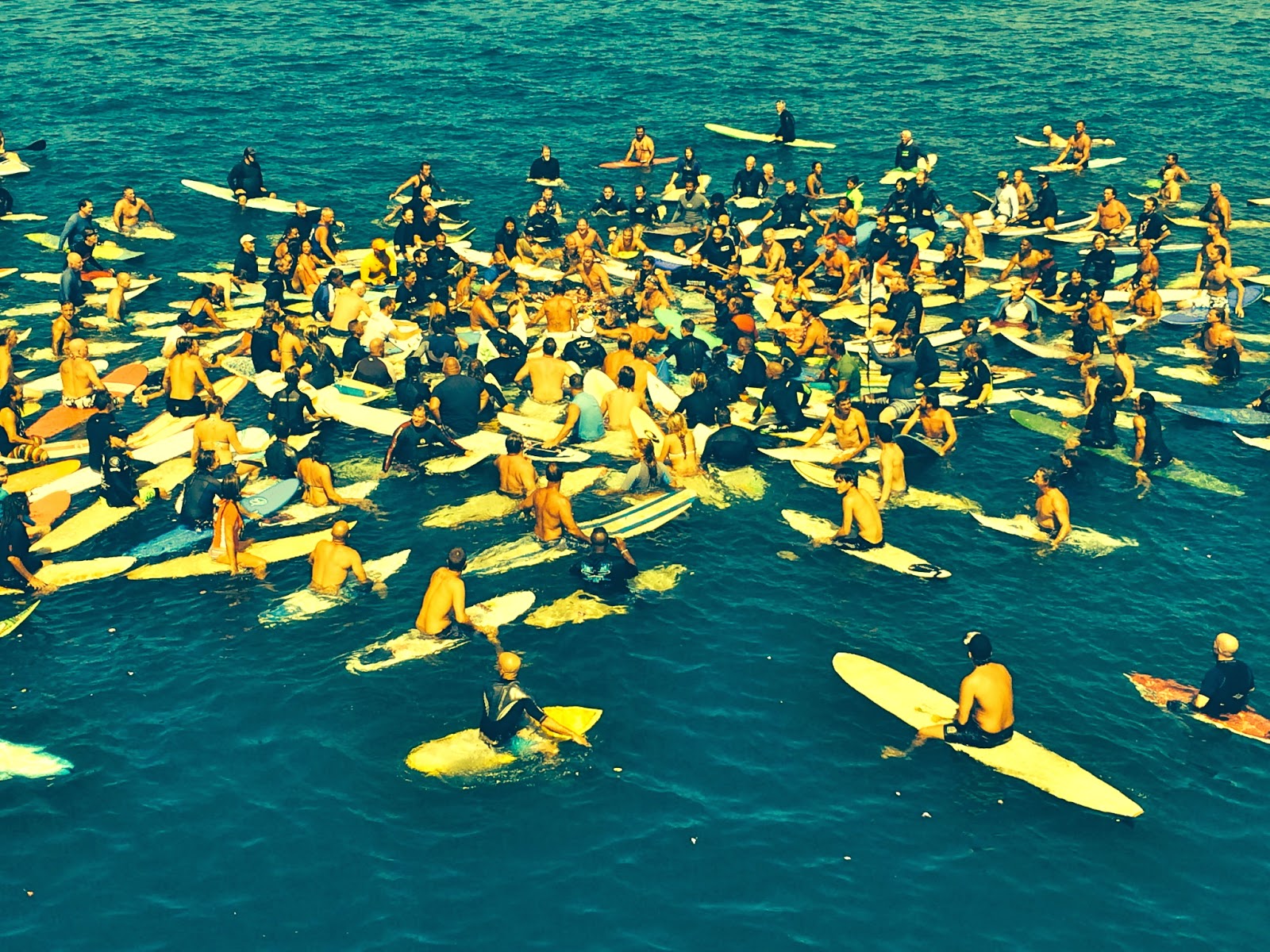 A giant circle formed, and symbolically brought everyone together again. 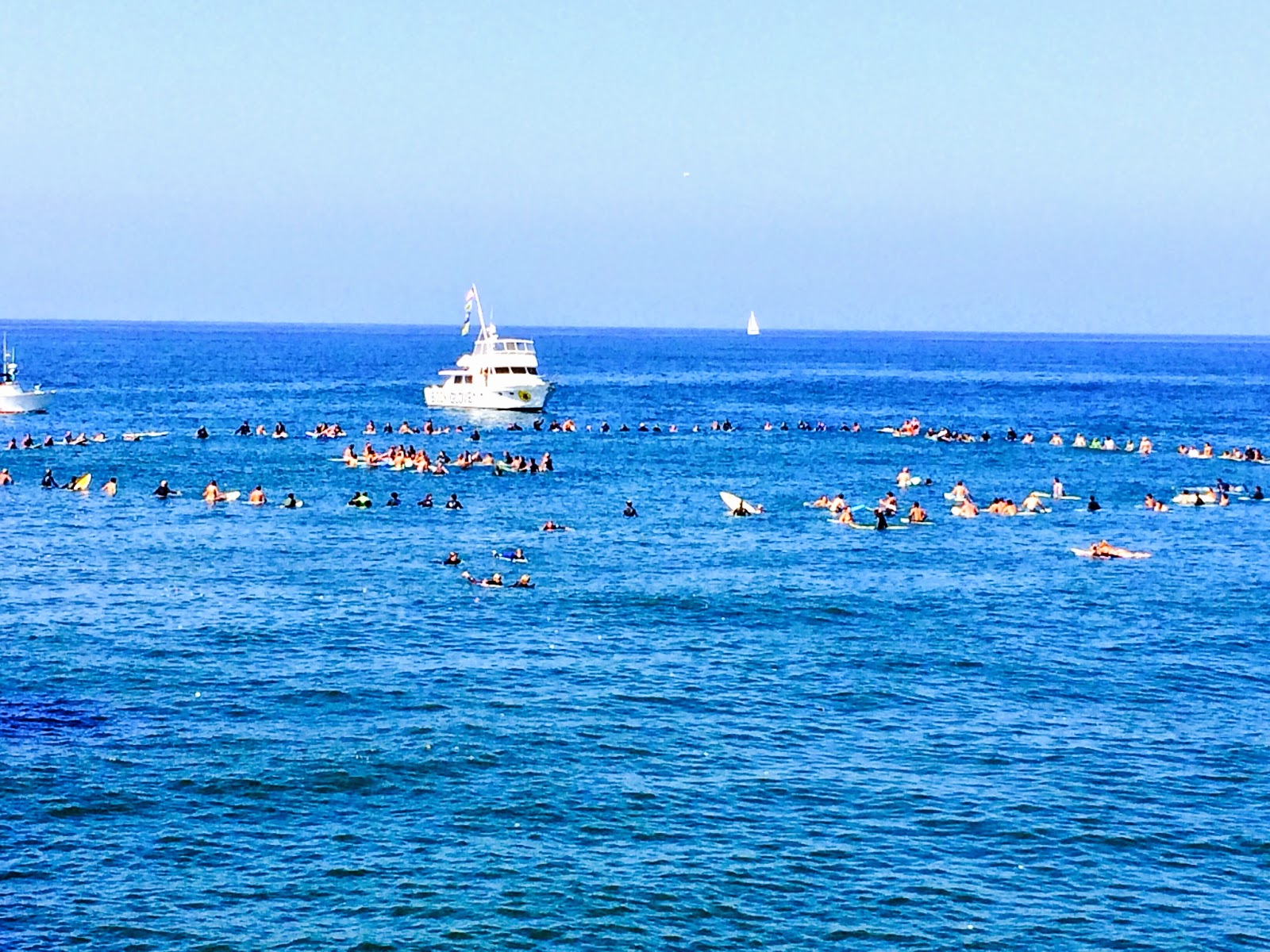 As we were watching (and a drone was filming it all from above!), rock star and Adams' friend, Perry Farrell, told me, "He had a ton of energy, total fearlessness and courage. Men aspire to be courageous, and Jay was. There was no one like him." 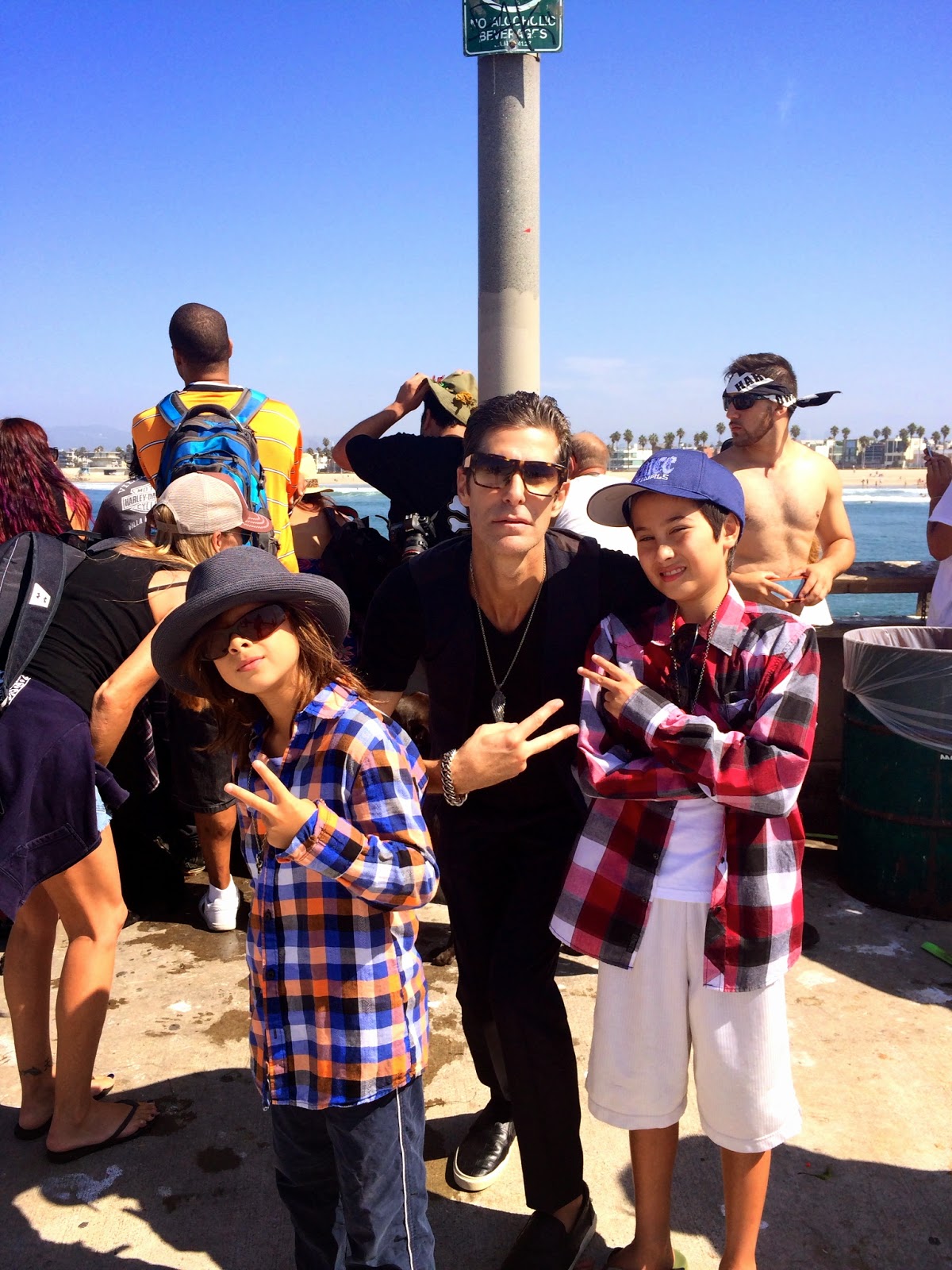 There was such a large turnout that there was a police presence, of course. I heard one guy say, "Jay ain't even here and the cops came!" People laughed about stories with Jay all day, with Martinez adding, "You always had the best and craziest times with Jay ... like all people growing up in Venice, we all had shady pasts, but then you evolve." Seven Adams added to that, "He grew up a punk - but the most loved punk ever - and died a man of God." Tracy Adams reiterated that, "He overcame so much, and became a man of integrity, 100% living and loving life." 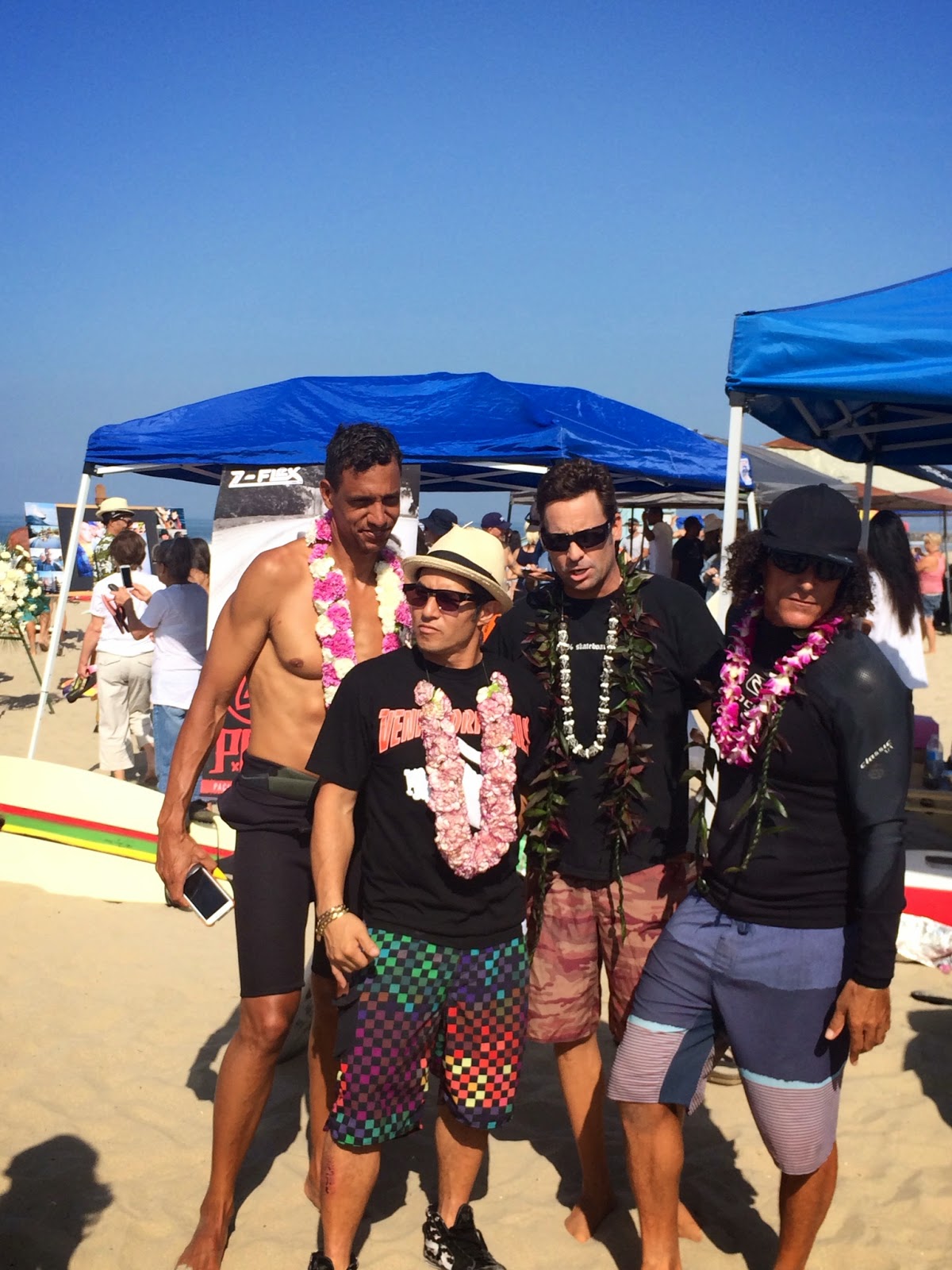 Carter Slade, a longtime friend of Adams, said, "The only thing you need to remember about Jay Boy is how big his heart was," and went on to share wild stories about Jay, like the time he surprised a friend that needed one with a car, keys just left under the mat. According to everyone there, he did stuff like that all the time. Tracy Adams told me that he'd just spent the recent Go Skateboarding Day in Mexico, giving little kids all his clothes and teaching them tricks.

When the paddle out was completed with a chant of "Live Like Jay!", everyone caught a big party wave back in, and spent the rest of the day catching up, partying around town, and then re-convening for a skate session over at the Venice Skatepark in the evening. 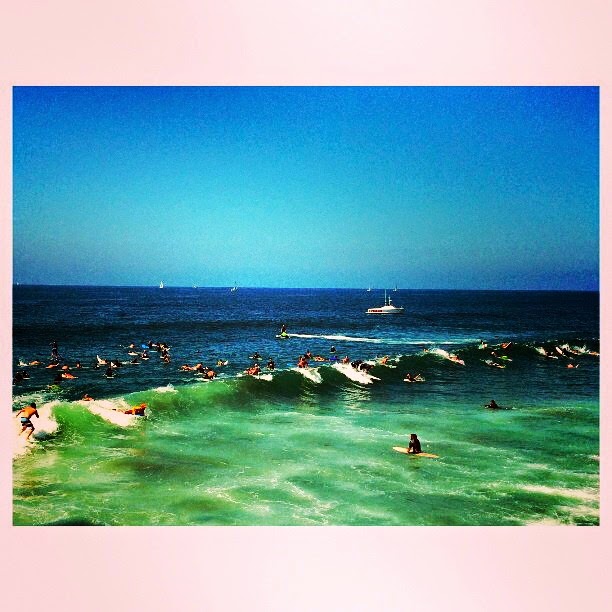 There, pro skate luminaries like Hosoi, Tony Alva, Stacy Peralta, and Lance Mountain eulogized Adams again through their tricks inspired by him, and an Adams mural was unveiled in the bowl. 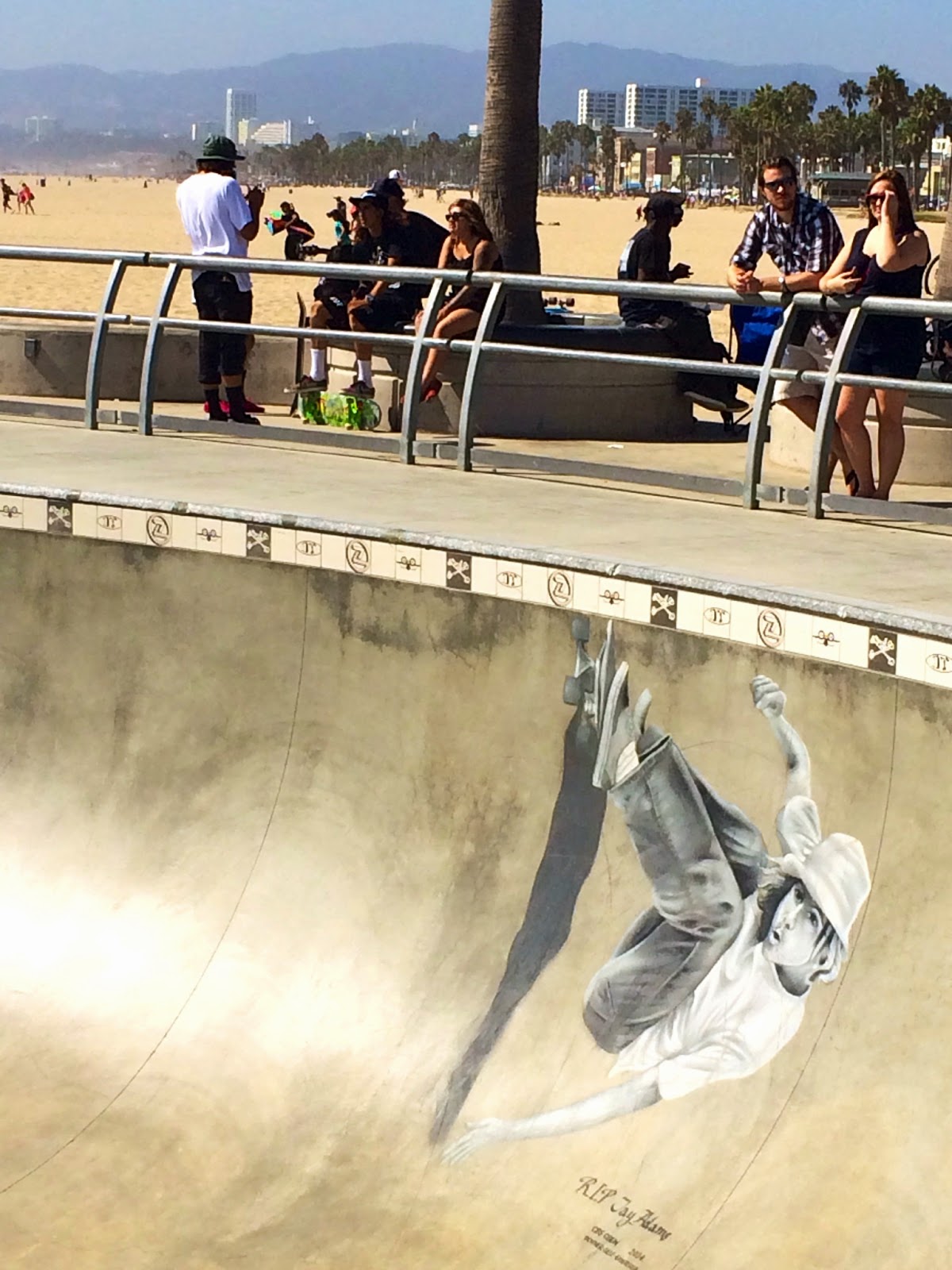 I saw a tiny little boy standing in front of the board decorated in tribute to Adams for the paddle out, and in that moment, the depth and importance of Jay Adams - both in Venice and in the skate and surf worlds - was captured for me. That kid will remember this day, and he'll learn tricks originated by the ever-smooth Adams. Adams himself said it best ... "You didn't quit skateboarding because you got old, you got old because you quit skateboarding." Generations of skateboarders ... forever young, with Adams to thank for that sage advice. 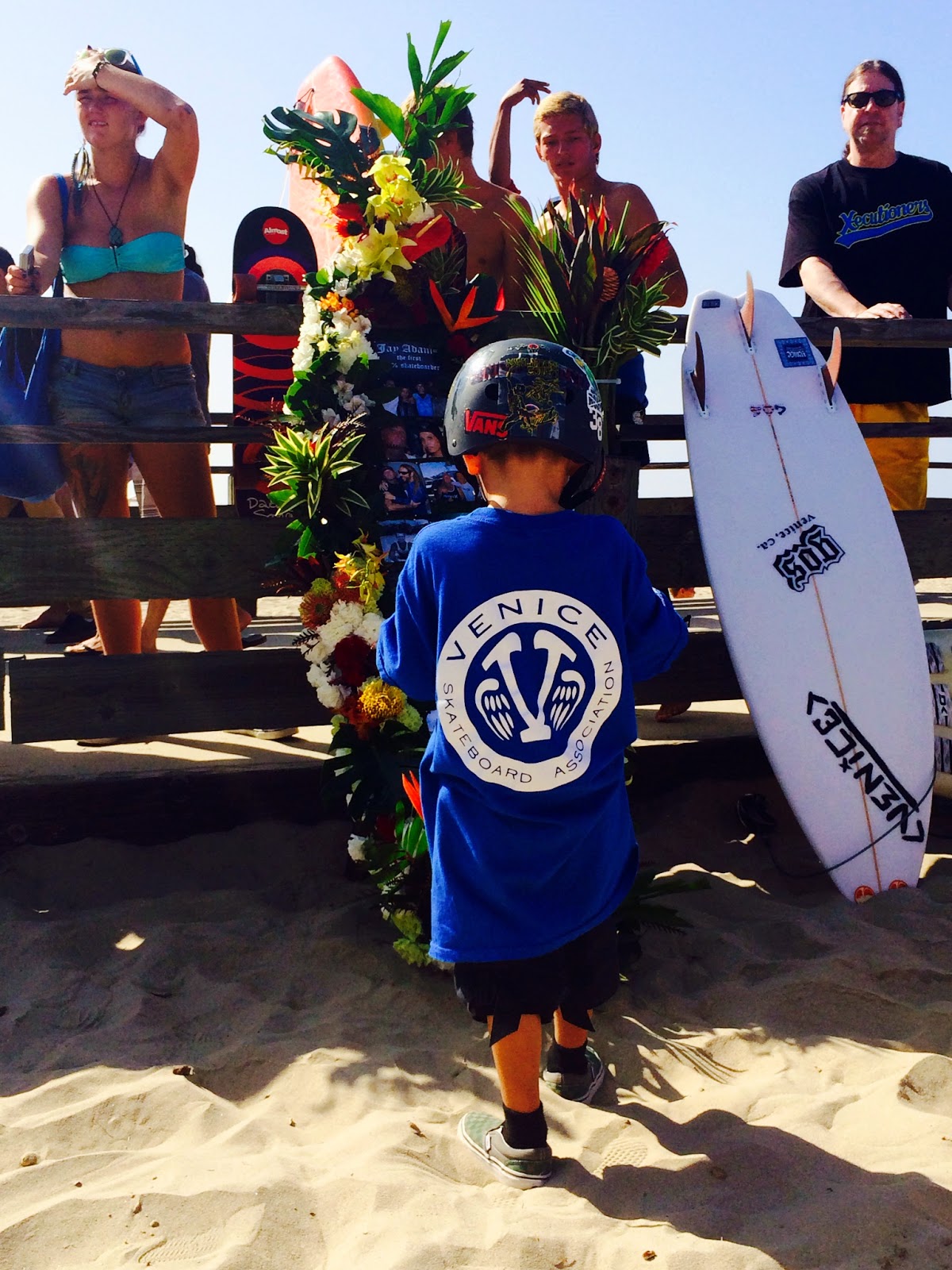 Adams, like the Venice he came from, was creative, unique, fun-loving, tough as nails, and very much beloved. It was a special day in Venice, for sure. Another Venice original, another piece of Venice history, is gone, but never forgotten. It's events like this that let you know how very special and precious it all is, and reminds you to hold it all dear. To Jay Adams for the reminder and the inspiration, to the spirit of Venice, and to the people who keep it alive every day ... To you all, thank you. 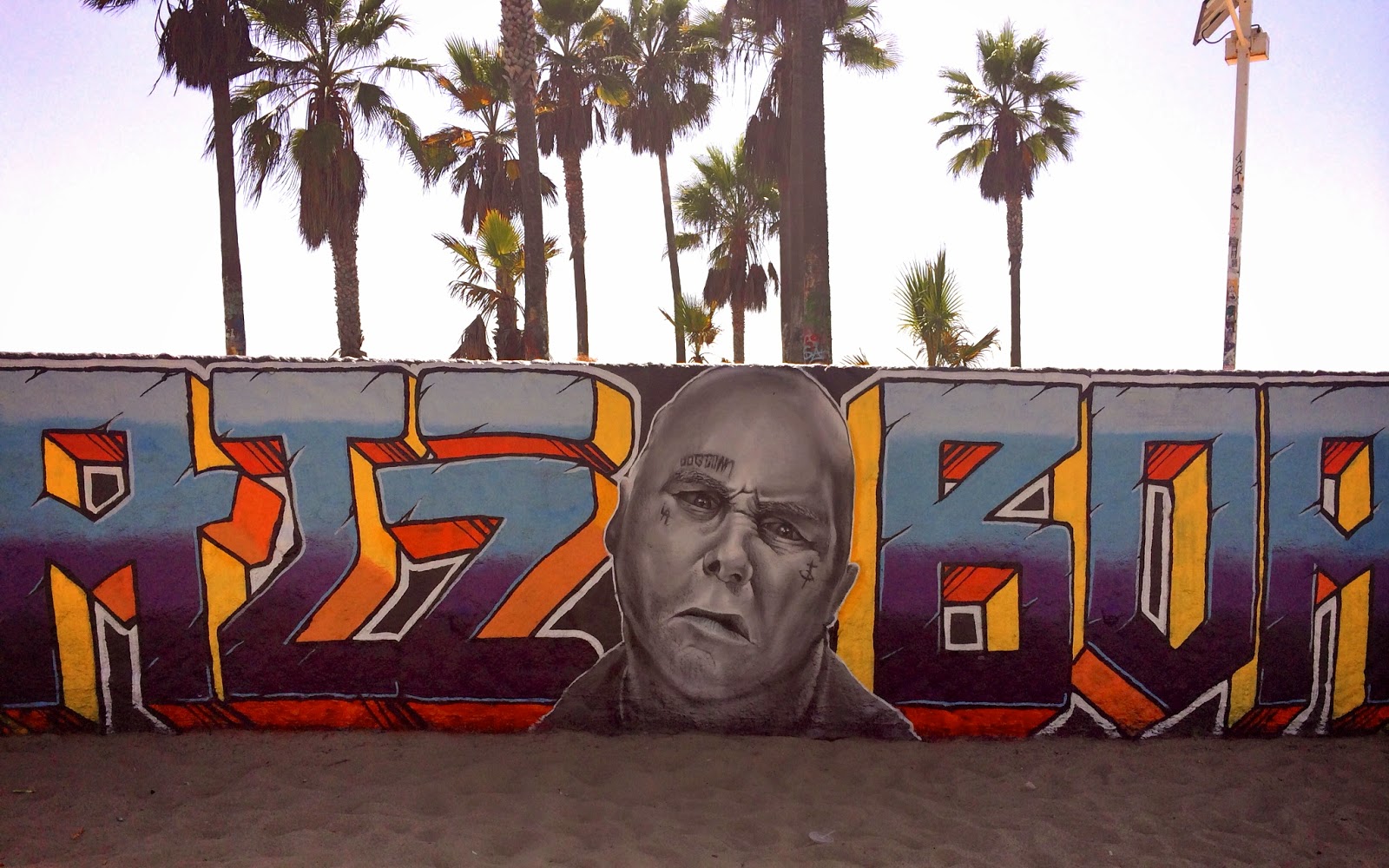 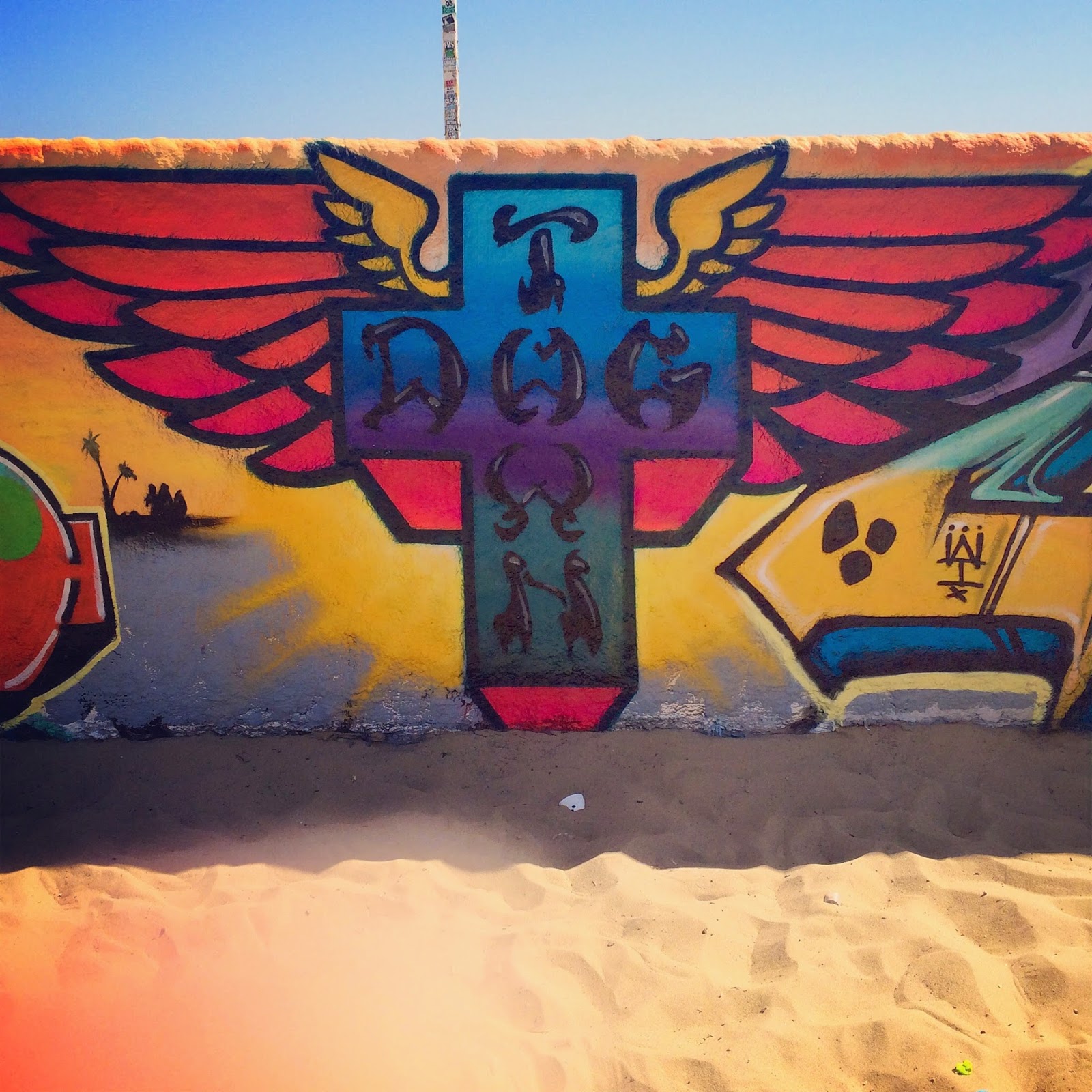