The Jail Guitar Doors Rock Out 2!

The second annual Jail Guitar Doors Rock Out was held September 5th at the Ford Amphitheater in Hollywood, and it certainly held true to its name. With another all star line-up coming together to benefit the organization founded by Billy Bragg (in the UK) and Brother Wayne Kramer and his wife Margaret Saadi Kramer (US) to bring guitars to inmates in prison as something positive in their lives. 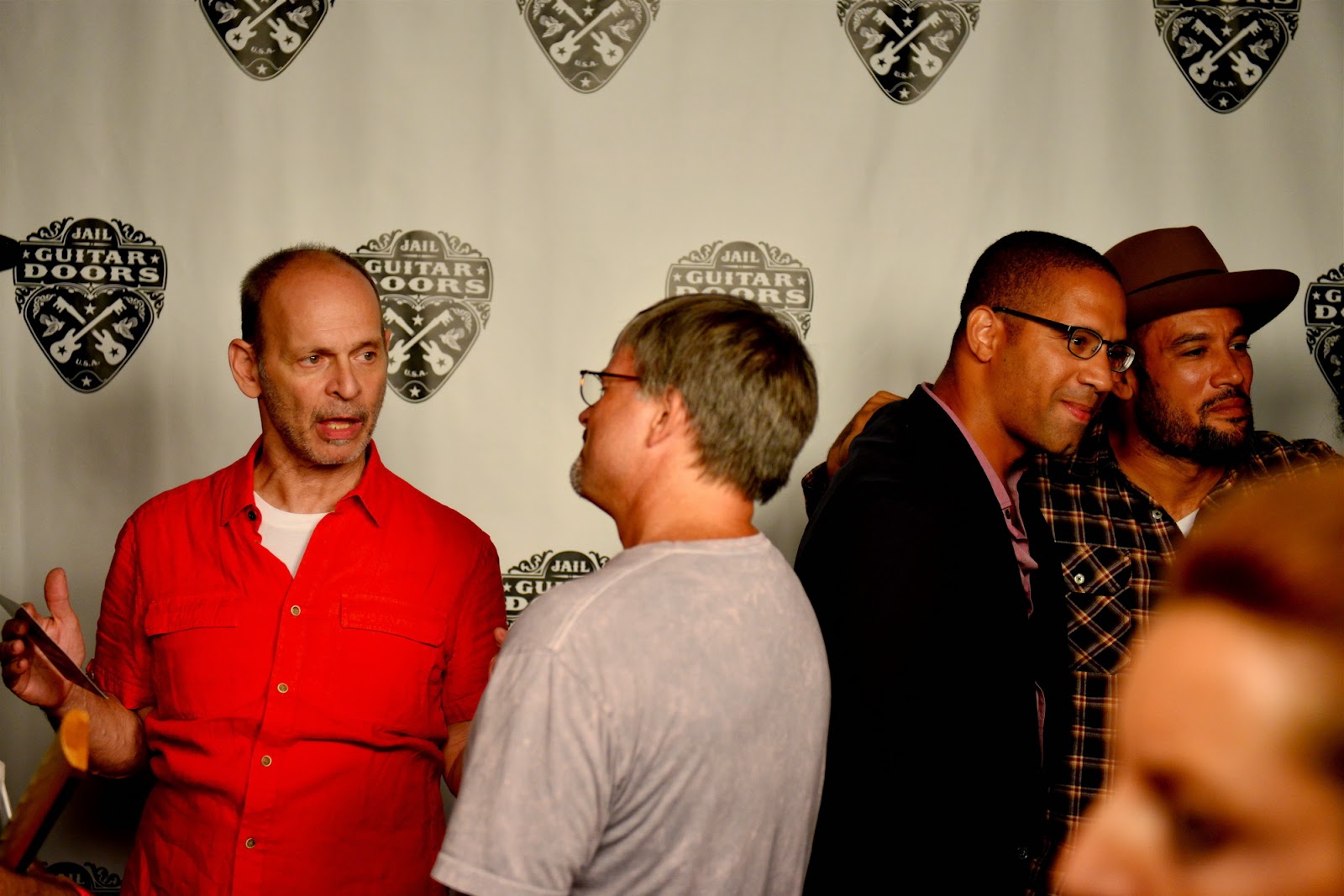 It's touching to hear the stories that happen each Tuesday night in the guitar classes led by JGD volunteers in the Twin Towers men's central correctional facility in downtown L.A. MC of the evening, Dana Gould, brought out Wayne Kramer to much applause, and Kramer explained, "We see  inmates learn to process problems in new, non-confrontational ways. The walls go down, racism goes down, classism, sexism goes down ... and we end up with all that we really are - human beings." 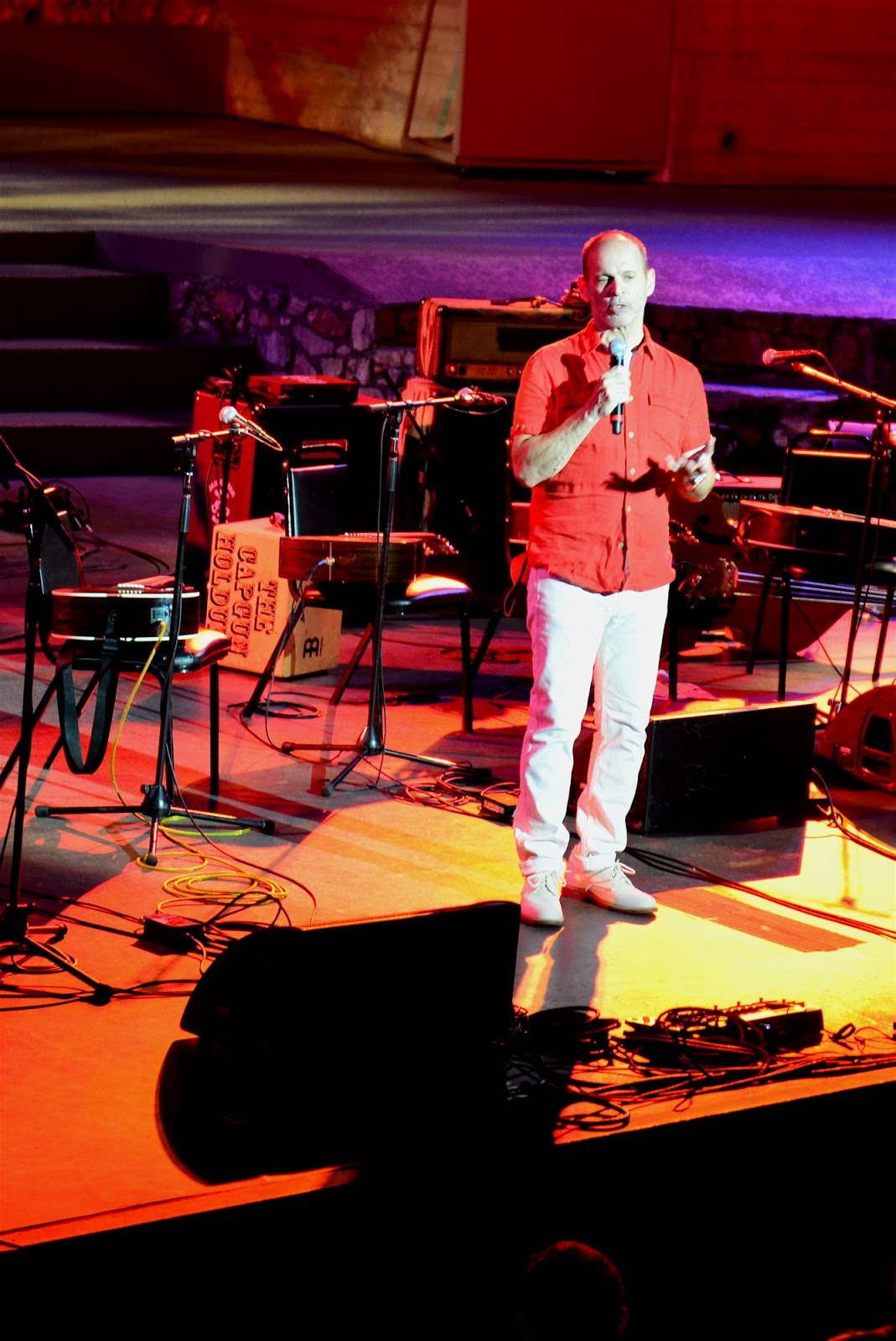 Powerful stuff, and the applause was resounding for the volunteers (Jason Heath, Cody Marks, Michael de la Rocha, Adele Bertei, etal.) and JGD graduates that came out to play the first number, a jazzy one, led by graduate Franc Foster, who has gone on to run his own music program on Skid Row. The chorus went "I love you" ... and that's just about the most important thing to say ever, so we were off to a good start. They clanged out the namesake Clash tune, "Jail Guitar Doors", and then it was time for Kramer to really shine. 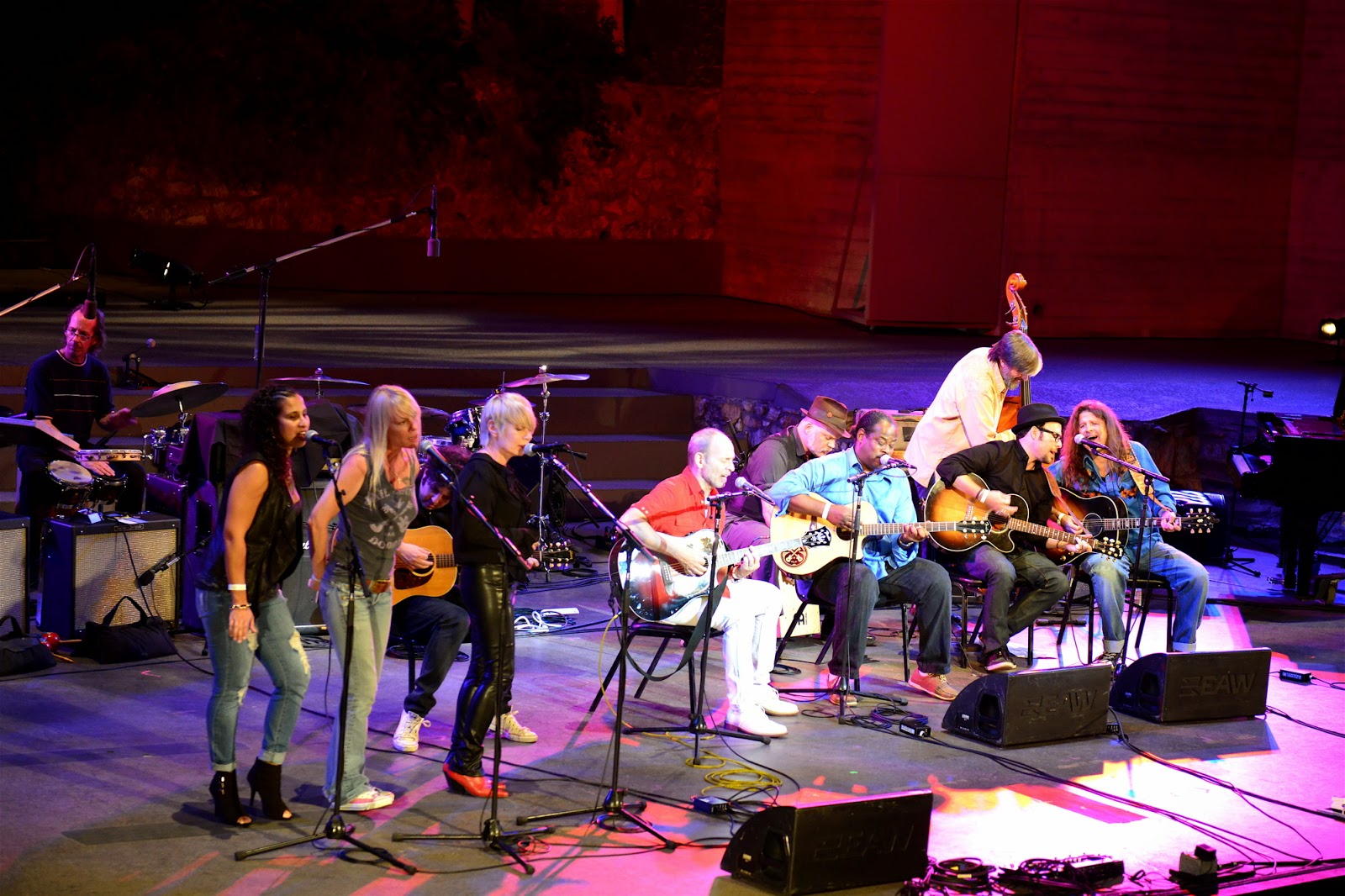 Earlier this year, Kramer released his jazz album, Lexington, and the Ford audience was in for a treat as Kramer and his Lexington Arts Ensemble (Phil Ranelin on trombone, Tigran Hamasyan on piano,  Buzzy Moore on tenor sax, Bob Hurst on upright bass, Doug Lunn on bass, Eric "The Claw" Gardner and Brock Avery on drums and percussion) spoke to us about life in prison through jazz in three instrumental numbers. 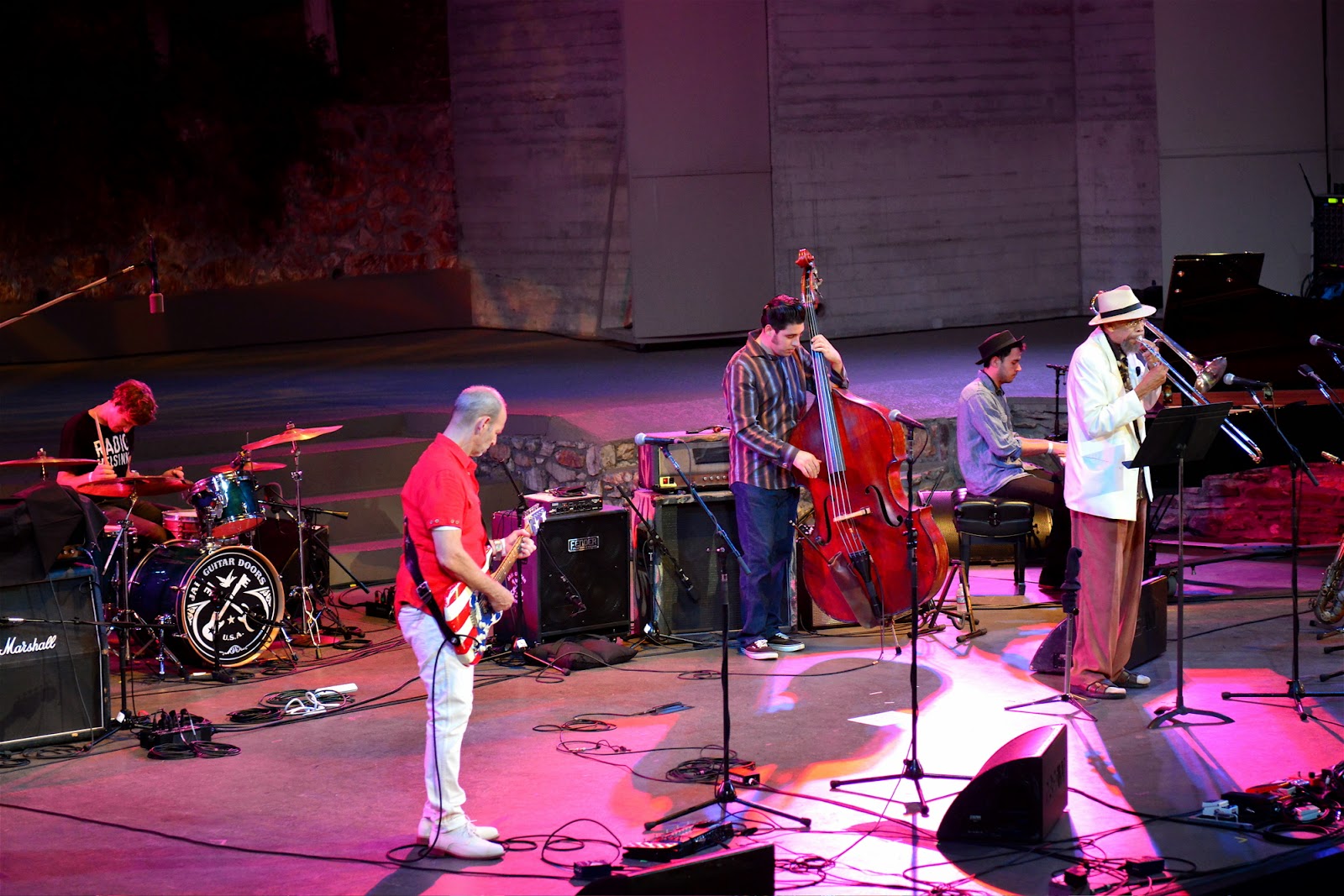 Kramer introduced the first number by saying that this album was "a way to talk about my jail experiences in my first language - music." As Kramer's signature star spangled guitar wailed in conversation with his fellow musicians in the Ensemble, and he tore off a particularly fresh solo, I thought to myself how he really is speaking, and we really are being taken on a tour of the thoughts and feelings involved with incarceration. It was heavy and cool at the same time, like jazz itself, I suppose. A true highlight. 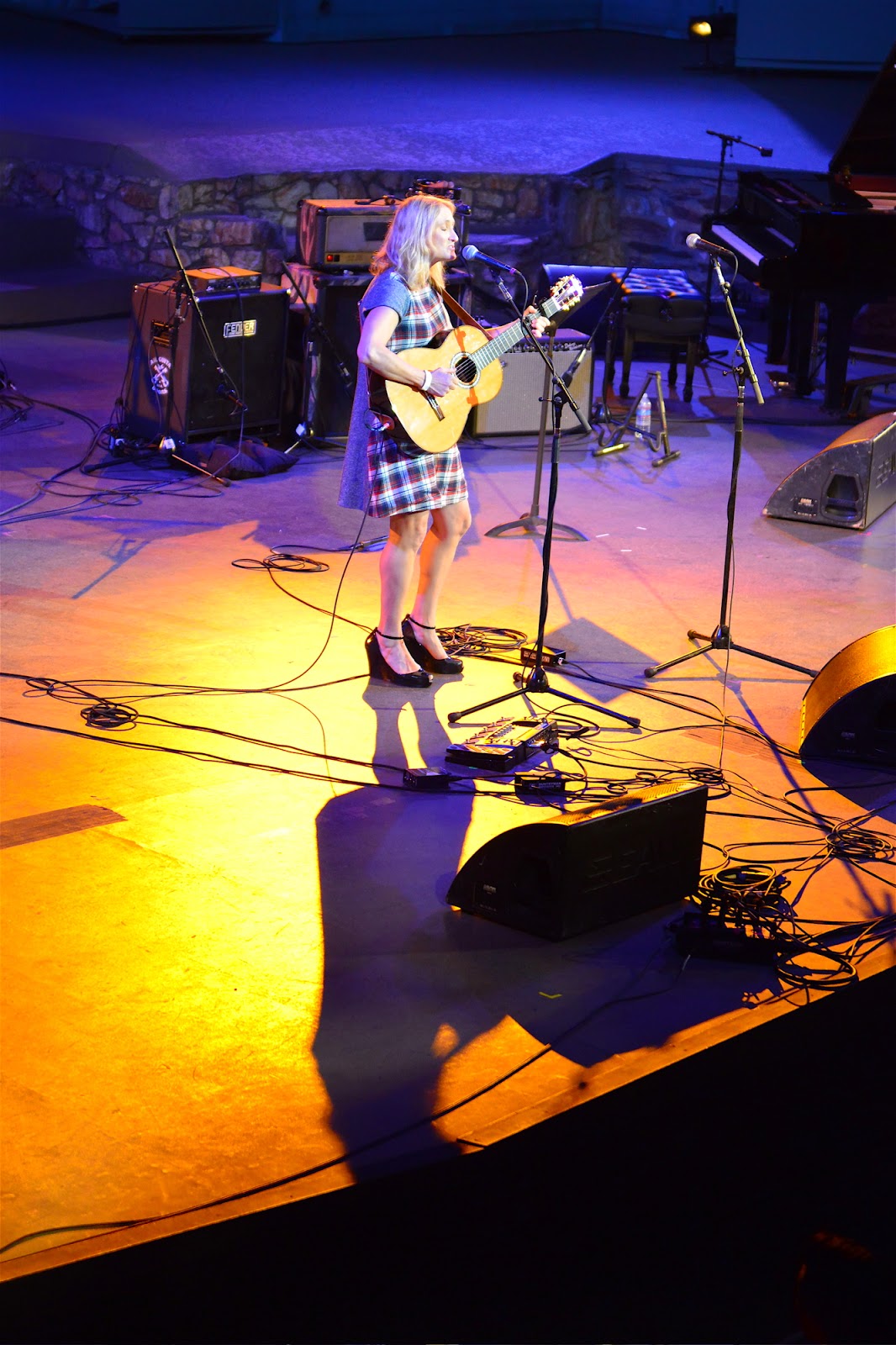 Gould next introduced the ever-charming Jill Sobule, as a "Musical novelist", which is true, because every Sobule song tells a whole story, always with a little zinger of wit included. Like in her opening number, "Jetpack" where she sings, "If I had a jetpack, I'd take you so high, If I dropped you, you'd die." She's the best. She brought out a band to join her on the next one, saying, "I'm not used to having a guitar person!" and said that her favorite gigs are always the ones played with Wayne. 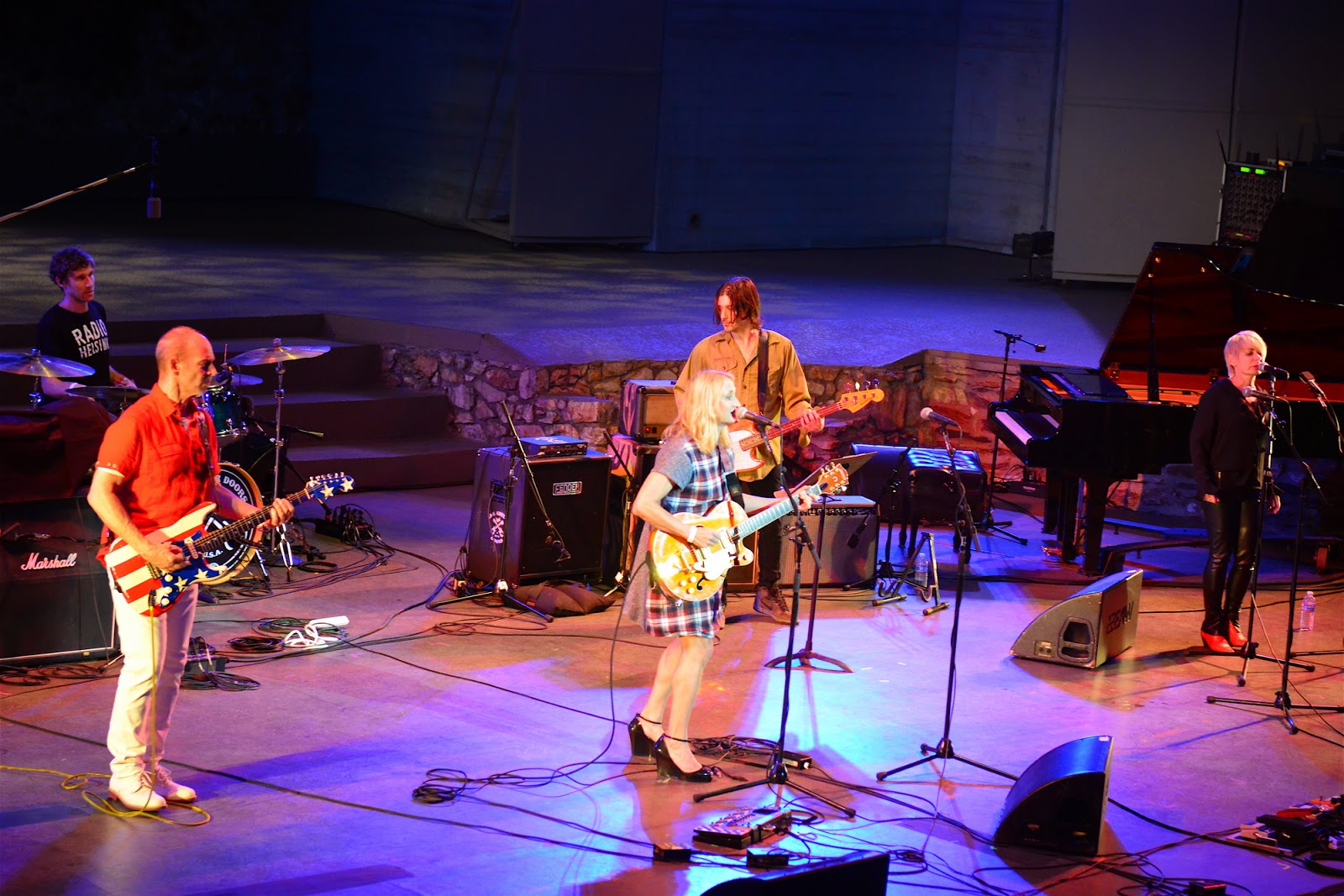 "When My Ship Comes In" was a rocker, with Sobule trading licks with Kramer metal-style. Raucous applause met them at song's end, and Sobule said, "I've always wanted to do that with Wayne!" Gould came out and said, "A guitar duel with Wayne Kramer? For a young lady, that takes balls." Yeah. 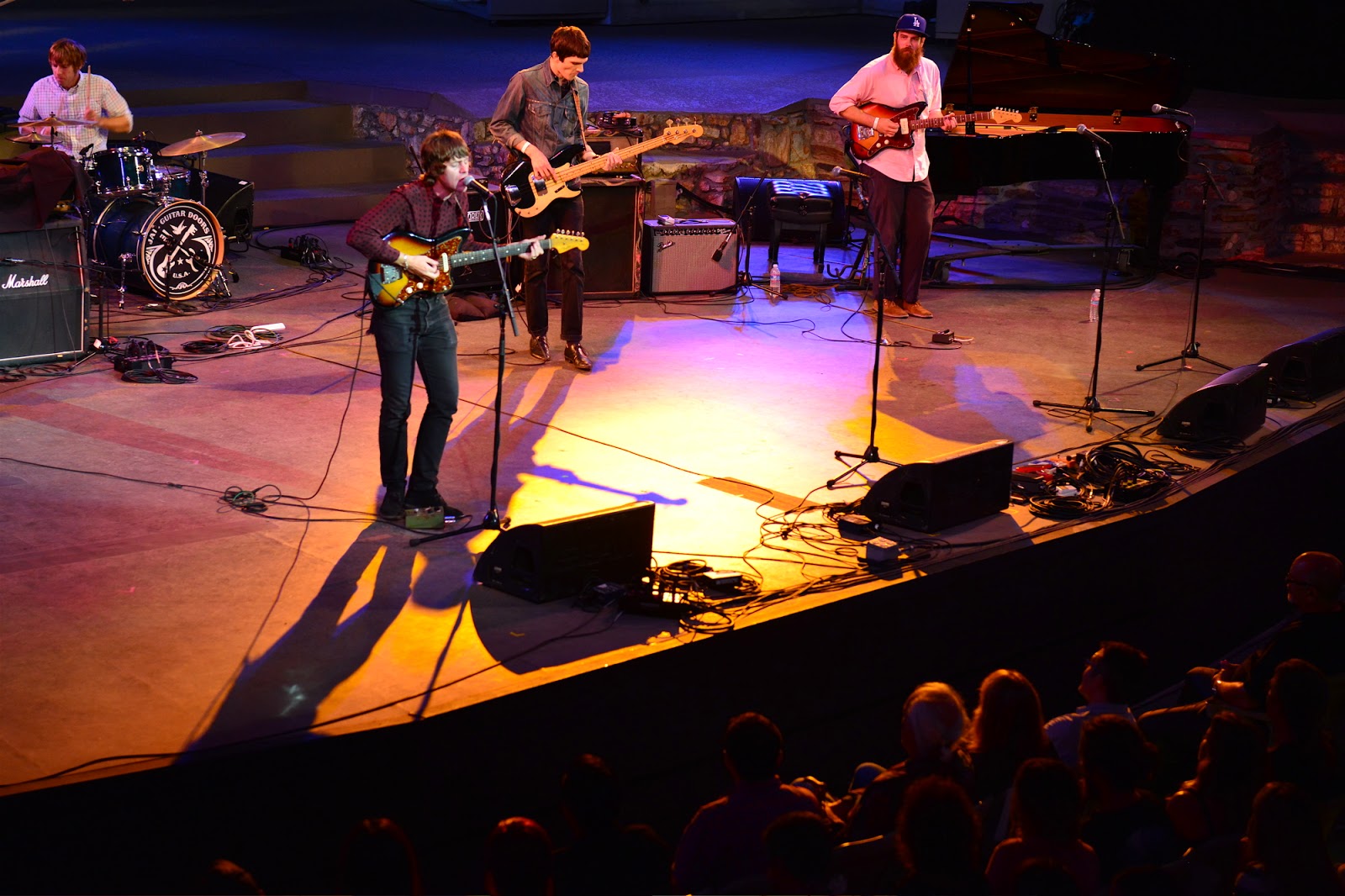 Next up was Tim Presley's White Fence, who, appropriately for the evening, have a new album called, For The Recently Found Innocent. While Presley looks a bit like a young Serge Gainsbourg, his band is straight out of hipster band central casting ... skinny jeans, pointy shoes, big beard, baseball hat ... check, check, check, check. They live in the "Psych Rock" bin at Amoeba, but had a lengthy jam band thing going too. They played two rockers for us before it was time for intermission. 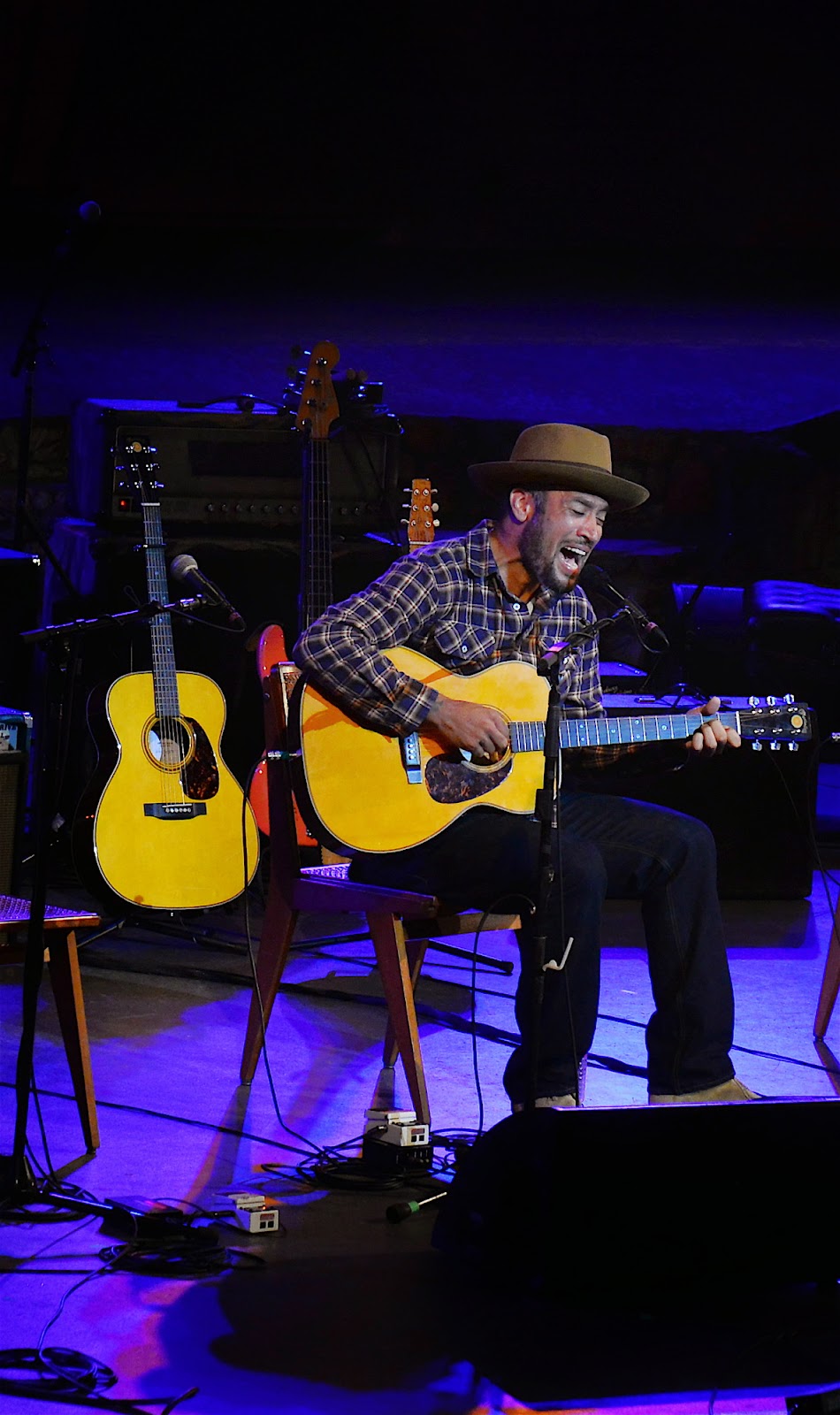 After a few minutes of catching up with old friends, checking out the JGD merch table, and grabbing a beer, it was time for Mr. Gould to introduce the next performer as playing with his Mother, "So she's obviously more supportive of his career than mine was..." and out came Ben Harper with his band, The Relentless 7 (Jesse Ingalls, Jason Mozersky and Jimmy Paxson on drums and garbage can). "My Mom told me to man up and play one on my own first," Harper joked as he and the band played an acoustic "Don't Give Up On Me Now". With all of his vast catalog to choose from, this was an interesting choice when each performer only got a few songs in their set. Maybe to tie in with the prison message or something, but it's not really a fan favorite. But still real good. 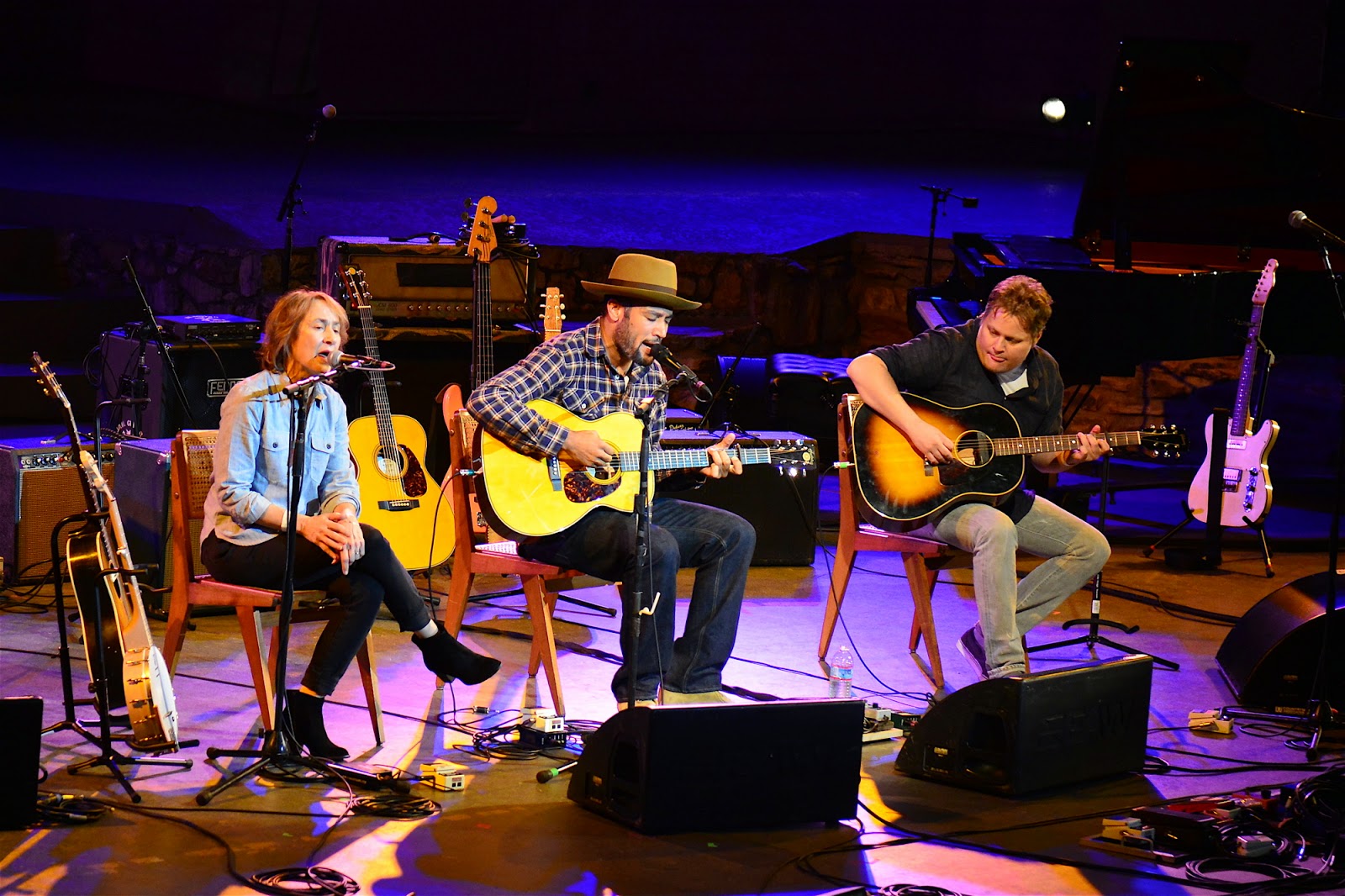 "I'm Ben Harper, and this is my Mom, Ellen." Harper welcomed his Mother, Ellen Harper, to the stage with a hug and a kiss, and they harmonized beautifully together on the family-feeling "A House Is A Home" from their recent collaboration together, Childhood Home.

Ellen Harper took the lead on "Farmer's Daughter" on vocals and banjo, while Ben slid away on his Weissenborn ... taking us to the Appalachians and back, lamenting the loss of family farms to conglomerates like Monsanto. It was very easy to see where Ben gets his talents, and his social consciousness, as he played next to the woman who gave him those gifts. And that was it! Shouts of "MORE!" met the Harpers and the band, but as Gould said, "Ellen has to get Ben's lunch going for their gig tomorrow." Ha. 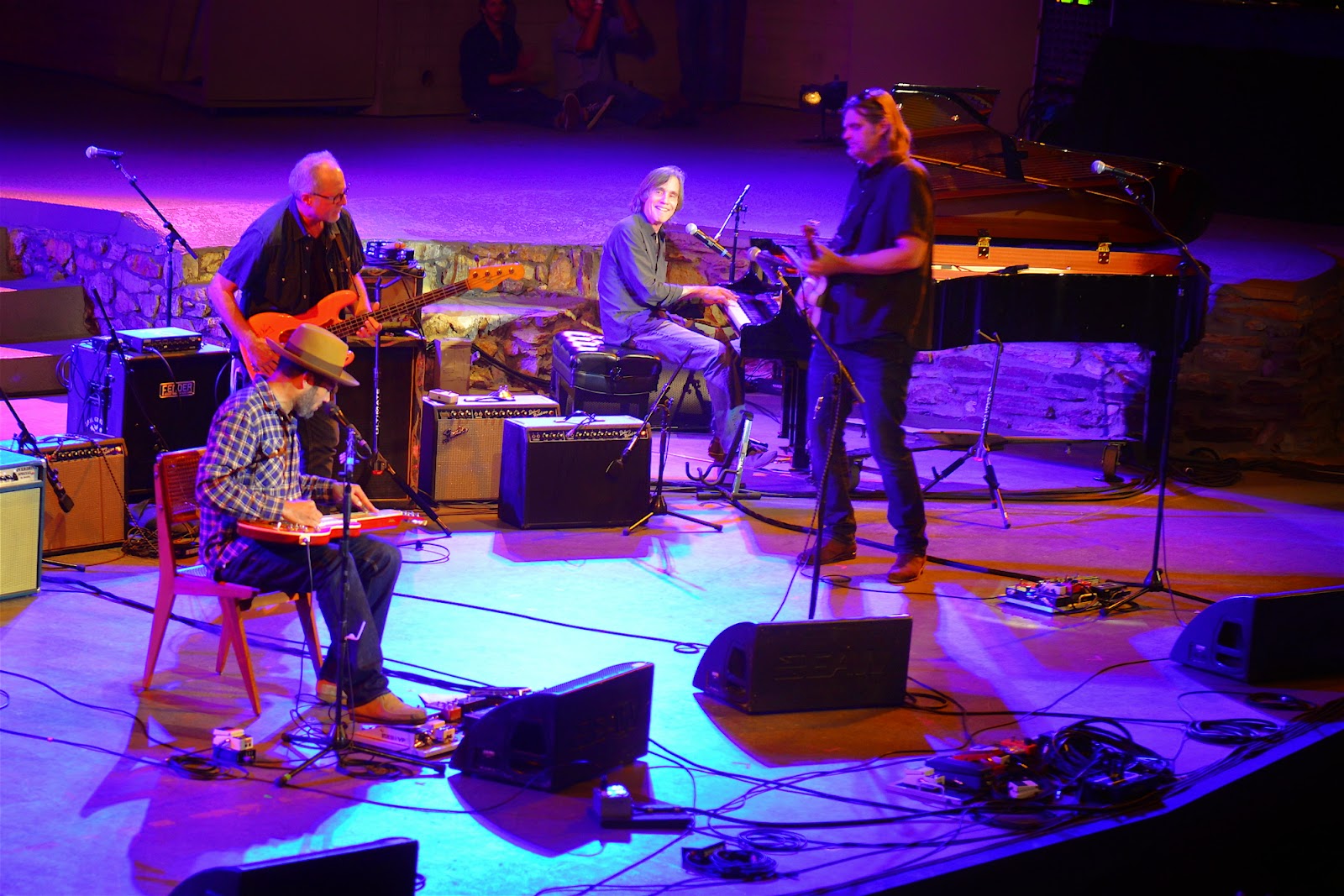 Rock Hall of Famer Jackson Browne took the stage next with a big band, including Ben Harper, who Browne brought back on to join him for a song "we both know, but we've never played it together before." So together they gave us, "Jamaica, Say You Will" (which Harper covered on the recent Browne tribute album, Looking Into You: A Tribute To Jackson Browne). It was as sublime as you can imagine, as Harper's Weissenborn, Browne's piano, and their classic voices blended together like a good dream. 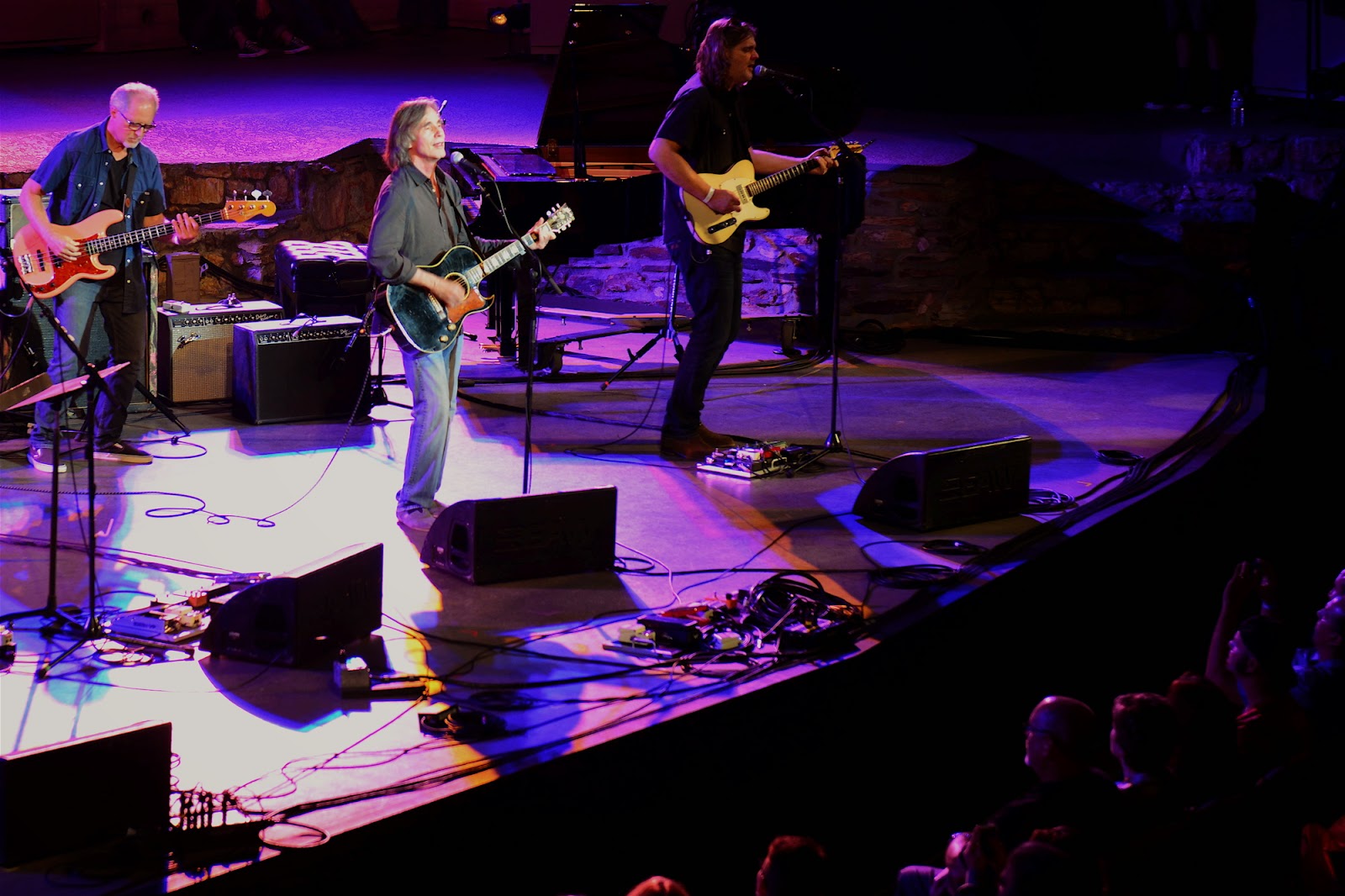 "I'm fortunate to be here ... compared to jail, we're fortunate to be anywhere," said Browne truthfully. He brought back Jill Sobule (Jack and Jill!) to join him on Warren Zevon's heartbreakingly tender "Don't Let Us Get Sick". So pretty, I almost cried (but if you know me, that's not that hard). After that loveliness, it was back to the rock, with Browne unleashing his timeless "Running On Empty", stoking the entire place, as everyone sang and danced along under the starry skies on a warm, Hollywood night. It doesn't get a whole lot better ... but it does. 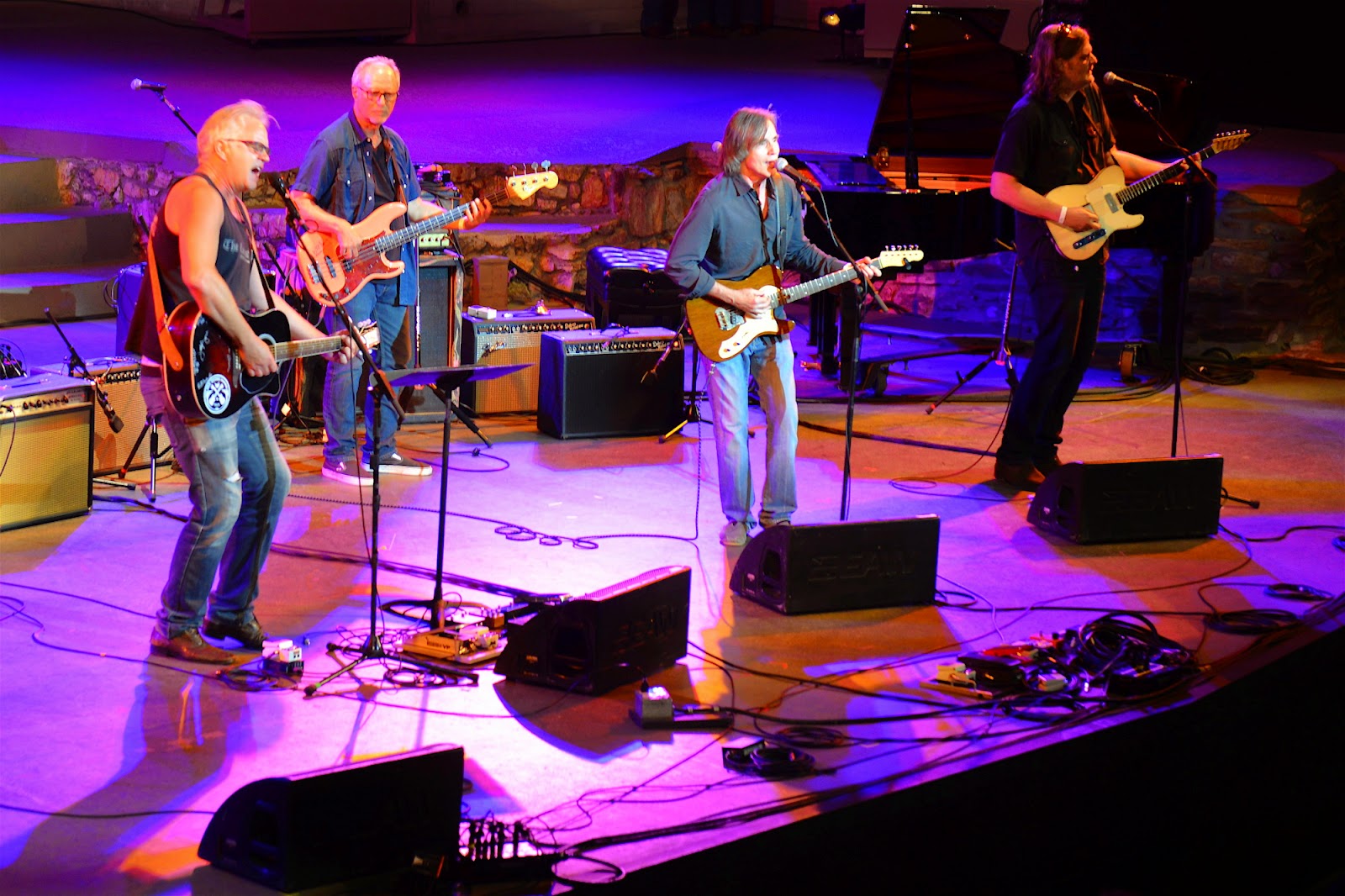 Browne brought out actor Tim Robbins (in a tank top) to join him, saying, "You're like the poster child for going to jail, Mr. Shawshank!" Fittingly, they lit into The Clash version of "I Fought The Law (And The Law Won)", trading licks and verses, and looking like they were having an absolute blast - as were all of us in the audience.

The octane got jacked up a whole lot higher for the last performers, Tom Morello and his Freedom Fighter Orchestra (Carl Restivo, Dave Gibbs, Eric Gardner). Bringing the incendiary rock for the final jams is now standard protocol for Morello at these events, and he did not disappoint. 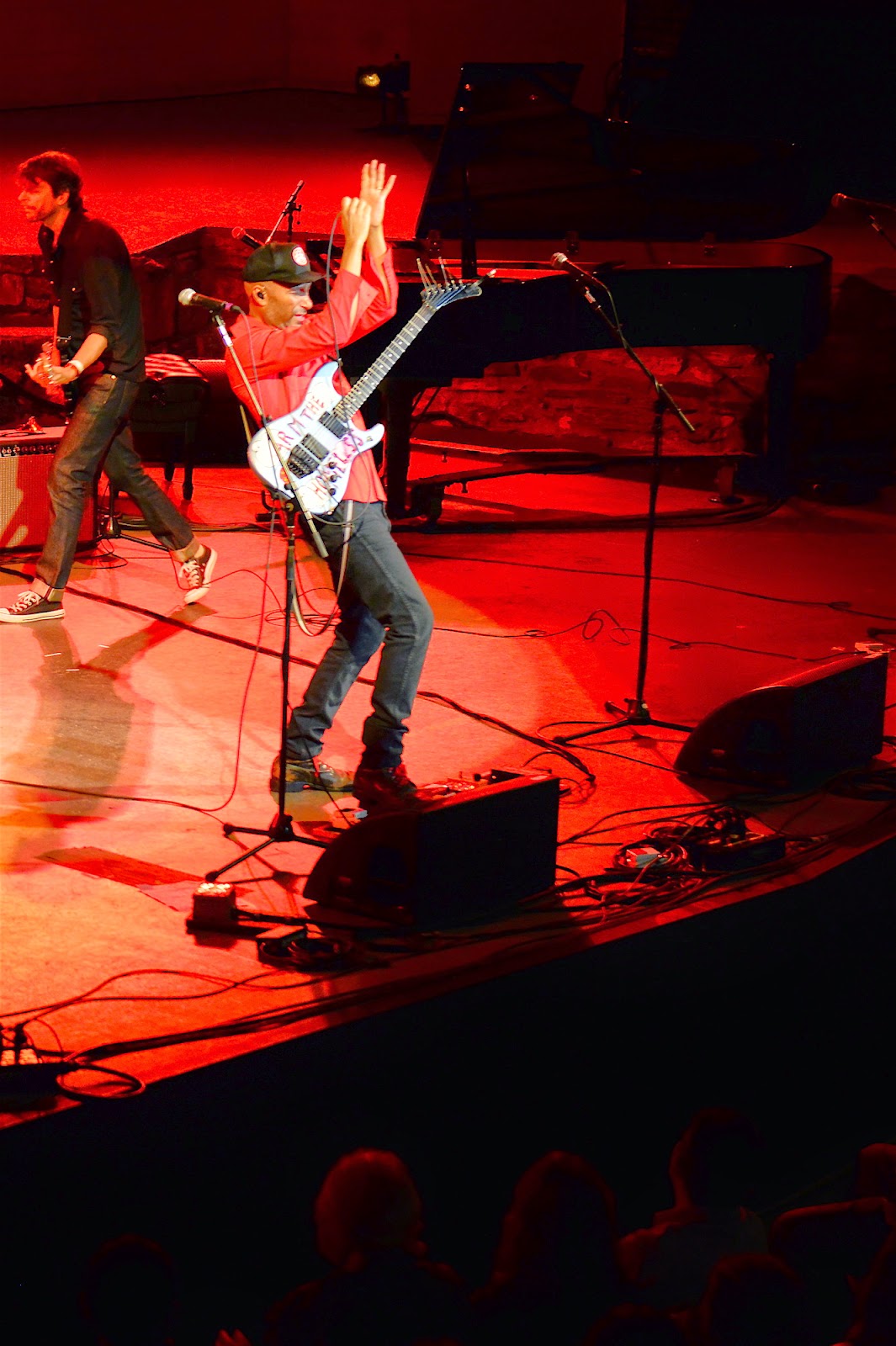 Unveiling the brand new and super timely "Marching On Ferguson", they had fists raised and a whole bunch of grey heads practically moshing. A heavy tune musically, lyrically and subject-matter wise, Morello reinforced the argument for him being the modern-age Woody Guthrie or Pete Seeger ... that can do a solo with his teeth on his Arm The Homeless guitar. 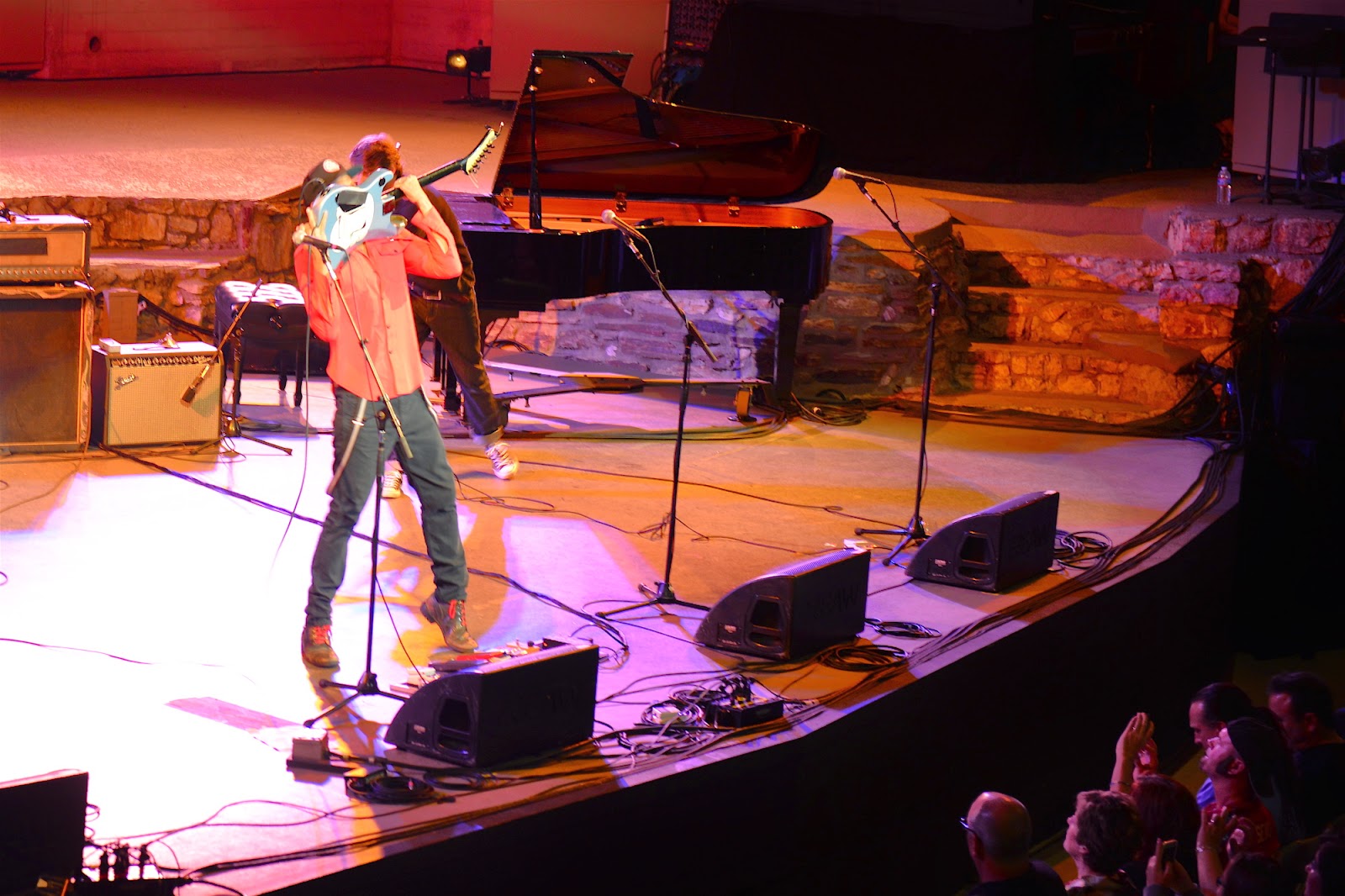 "Well, this is my last song because of curfew issues, so let's make it a good one!", said Morello to a disbelieving, riled up crowd. It WAS a good one, however, as Morello's version of Springsteen's "The Ghost Of Tom Joad" would have blown the roof off of the Ford, if it had one. It's so much his own now, with the famous guitar solo that still gives me chills. When you hear THIS Tom sing ... 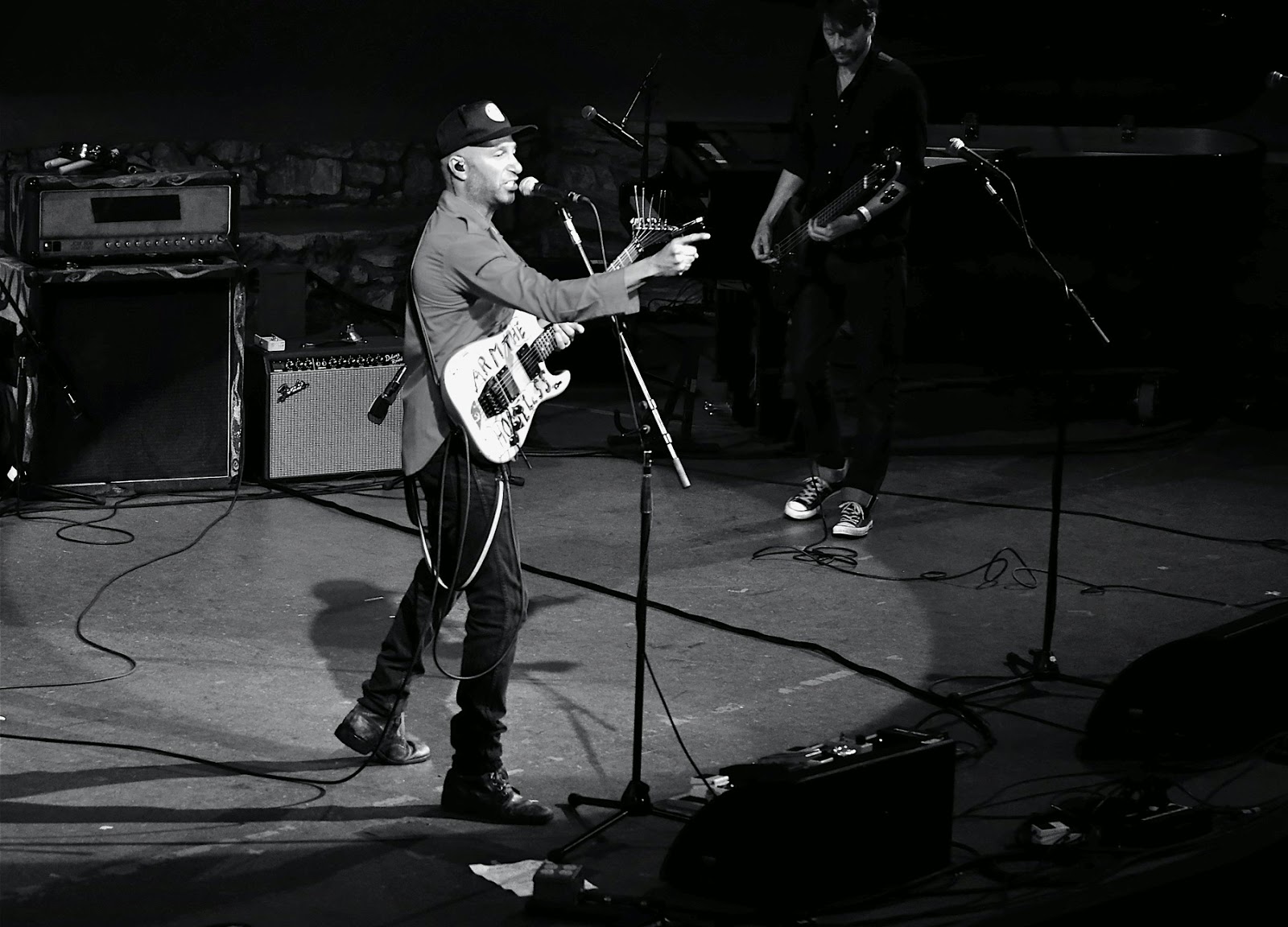 Now Tom said, "Ma, wherever there's a cop beatin' a guy,
Wherever a hungry newborn baby cries,
Where there's a fight 'gainst the blood and hatred in the air,
Look for me, Ma,  I'll be there.
Wherever there's somebody fightin' for a place to stand,
Or decent job or a helpin' hand,
Wherever somebody's strugglin' to be free,
Look in their eyes, Ma, you'll see me.

... you know that he absolutely means it. If there's a strike at the Port of L.A., or a Teacher's Union picket line, or a night of rock to help give incarcerated inmates something positive in their lives, Morello can be counted on to be there, if at all able. I am proud to be his friend, straight up. 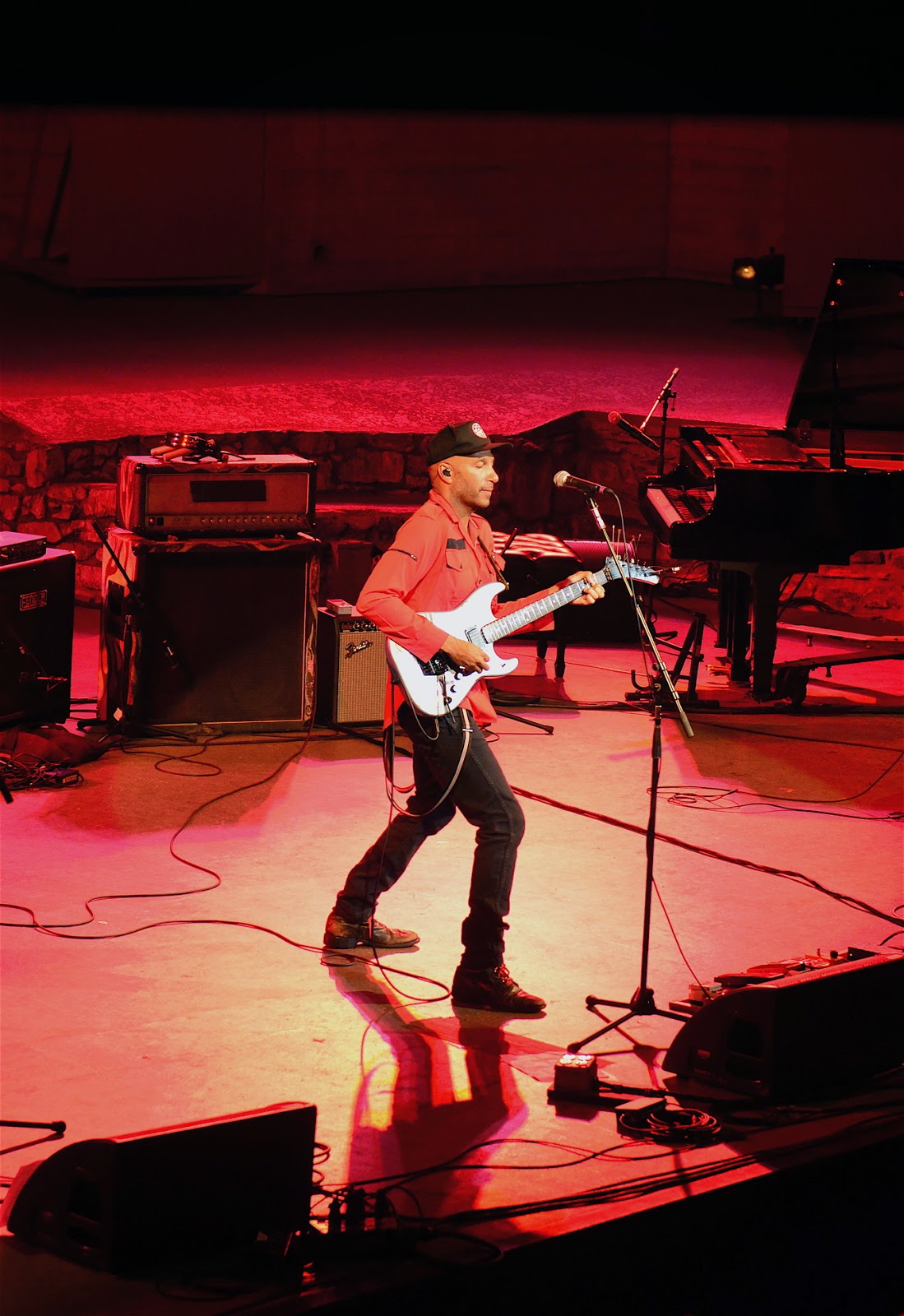 People jumped to their feet, whistling and stomping, having just had their minds blown. "Does that mean you want one more song?!", Morello shouted. He then invited EVERYONE down front to jump and scream around for "The Road I Must Travel". 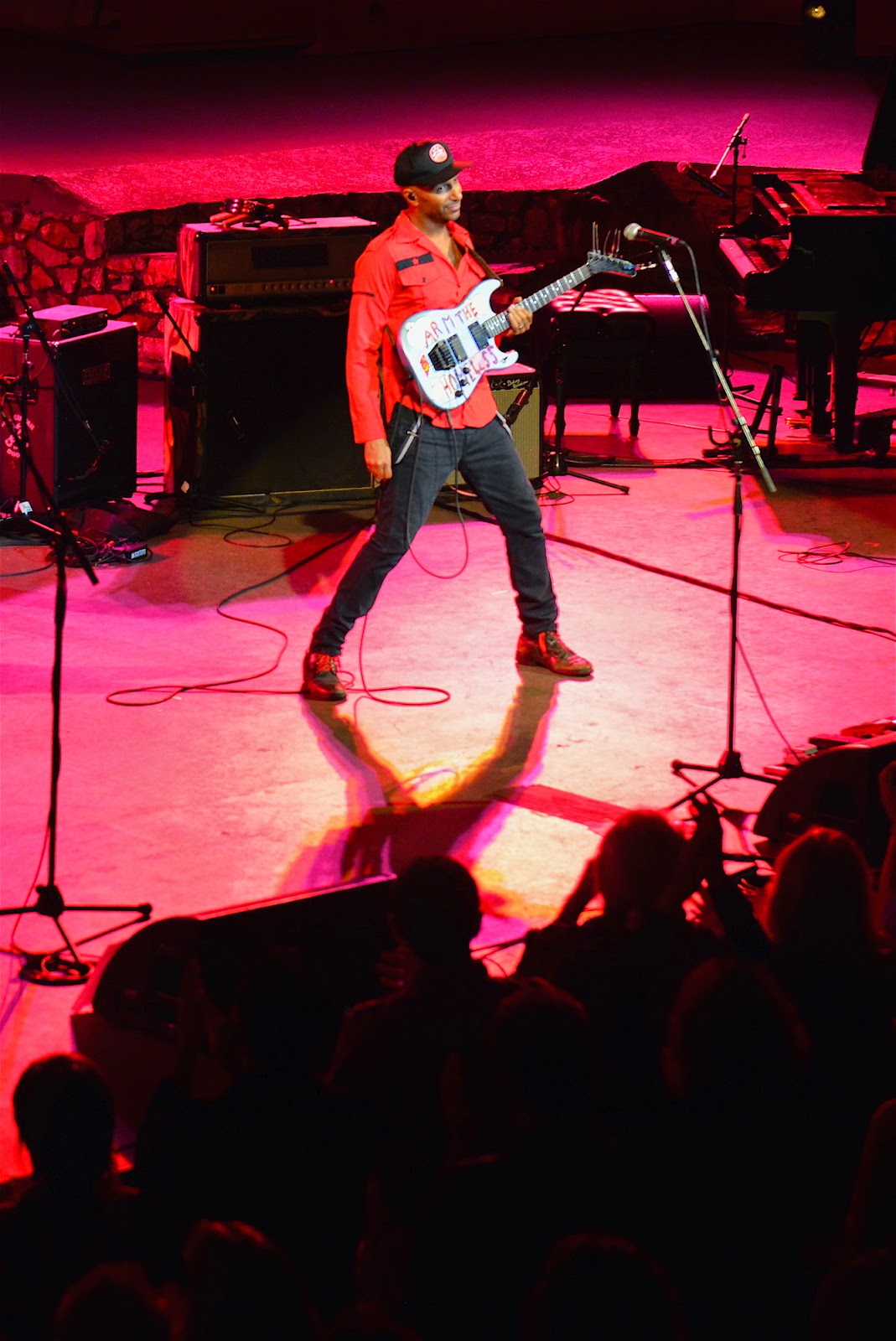 "OK, I need that 17 times louder, all together in solidarity!" ... and together the Ford crowd shouted the "Na, na, na, na..." chorus one more time. After more yelling for more, Morello ignored the curfew (and the fines), saying, "I don't think I'm done with you yet," and launching into the power riff from Rage's "Sleep Now In The Fire". All-time. 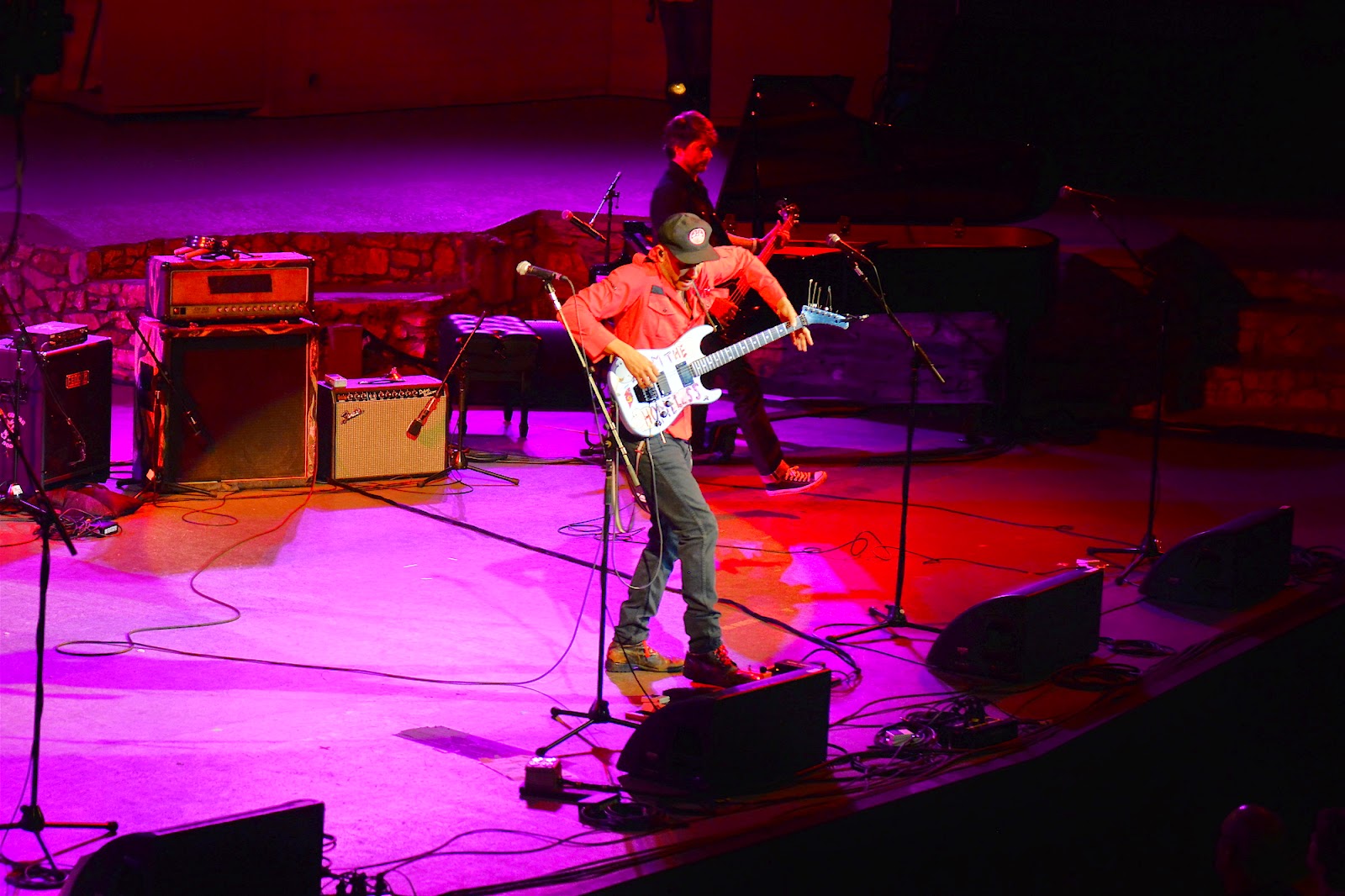 "TAKE IT EASY! TAKE IT EASY! TAKE IT EASY! ... BUT TAKE IT!!!" shouted Morello in his customary sign-off, but then swerved and said, "Fuck the curfew, let's play one more!" No one minded in the least (besides maybe Ford Theater neighbors, but they should be thrilled), and Morello brought back the whole line-up for the All Star finale. "Where's Ben Harper?! I've been waiting my whole life to play this song with Ben Harper! C'mon, we're being charged $15, 000 a minute!", Morello kept asking, but alas, the Harpers had already curiously peaced out ... Mom must not have wanted him out past curfew (Sorry. The comedian stuff rubbed off a little). 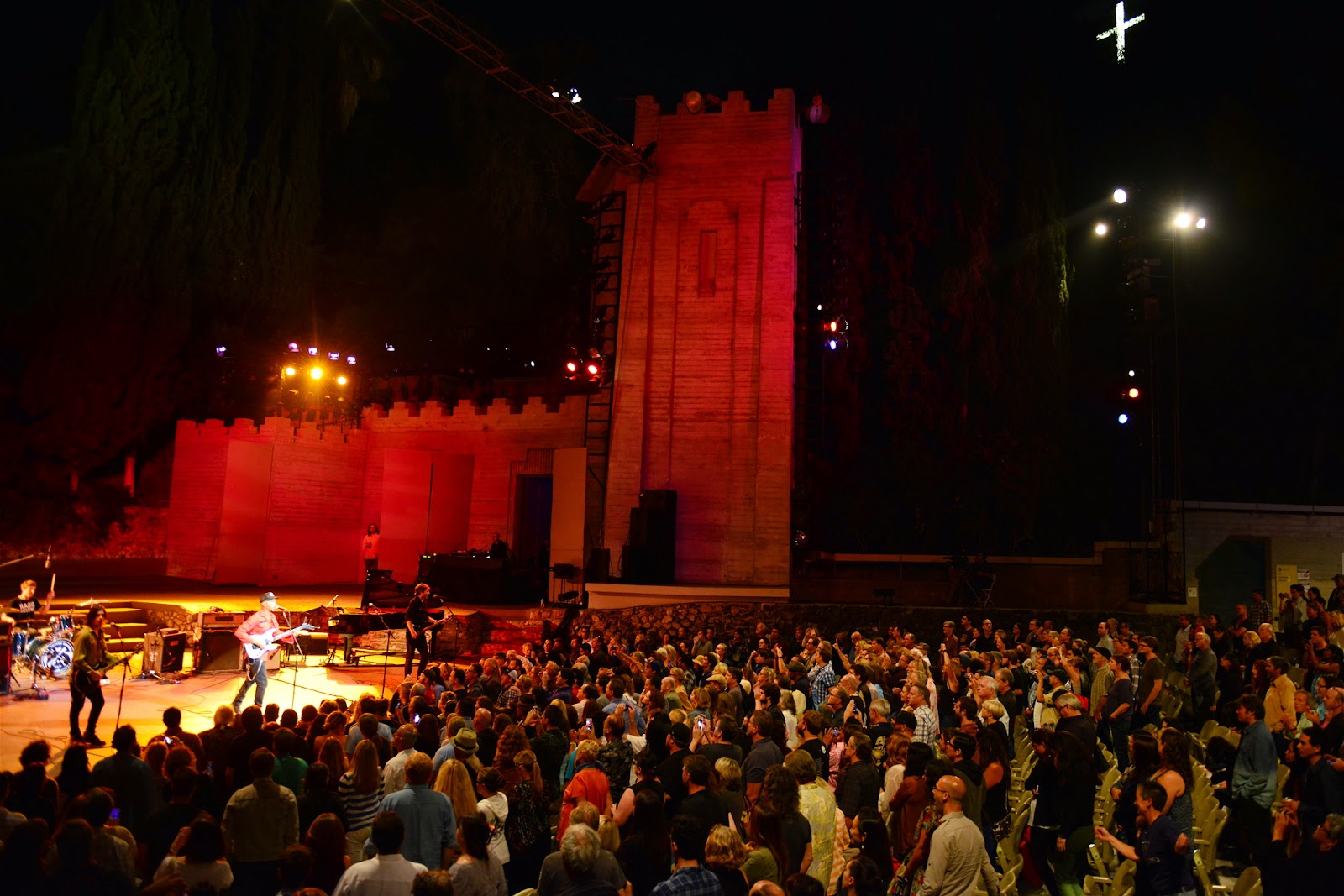 A shame, because who wouldn't want to play Kiss's "Rock And Roll All Nite" with Morello, Kramer, Browne, Sobule and a slew of other fantastic band members that BROUGHT. IT. Carl Restivo took on lead vocals, and we really could have kept it up all nite. 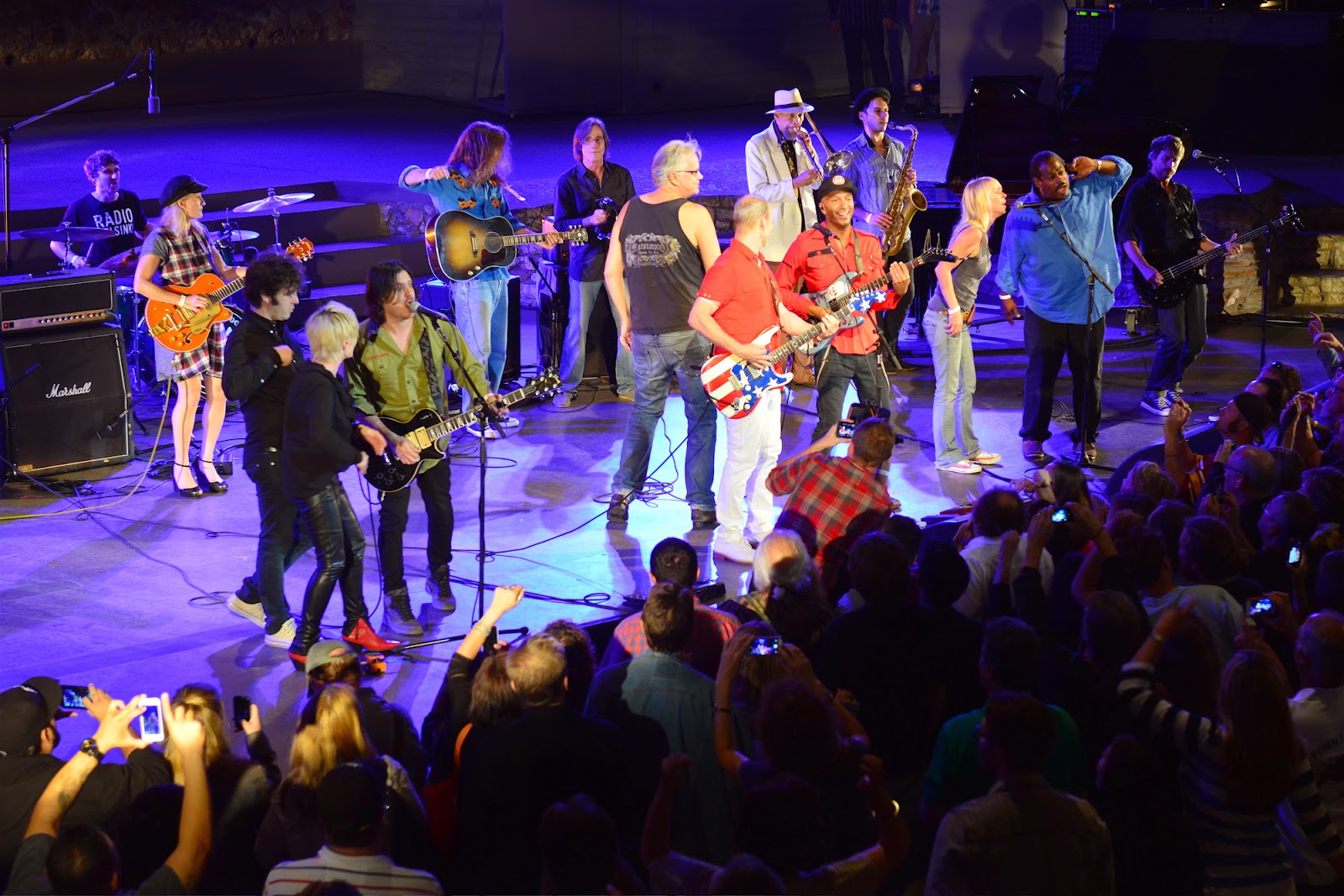 You can't have a Wayne Kramer gig without seriously kicking out the jams, and that's what the grand finale was, with everyone on stage as one unified Guitarmy. Kramer, Morello, Robbins and Browne all shared a mic at one point, and it was a delight to watch Franc Foster watching all these music heroes playing for, and on the behalf of, people just like him. 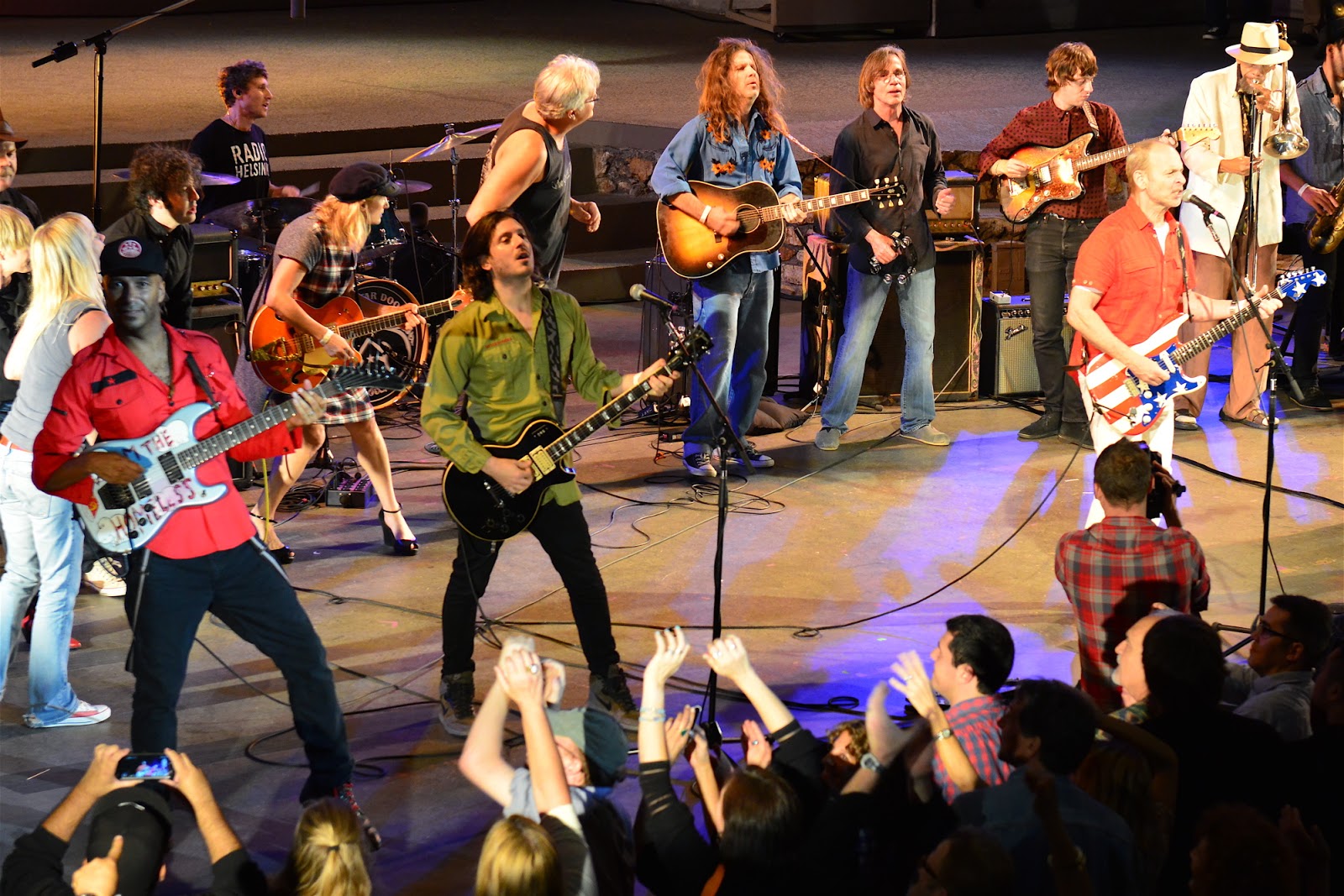 Jail Guitar Doors gives hope to the inmates it serves. It also gives hope to the world, that you can always make change for the better. When Kramer shouted at song's end, "We done kicked 'em OUT!", it was about the jams, of course, but it could just as well have been yelled about all the 'isms that he spoke about at the beginning of the show ... there's no room for racism, sexism, or any negativity at all when you share moments like this with good people like these ...it's ALL kicked out. 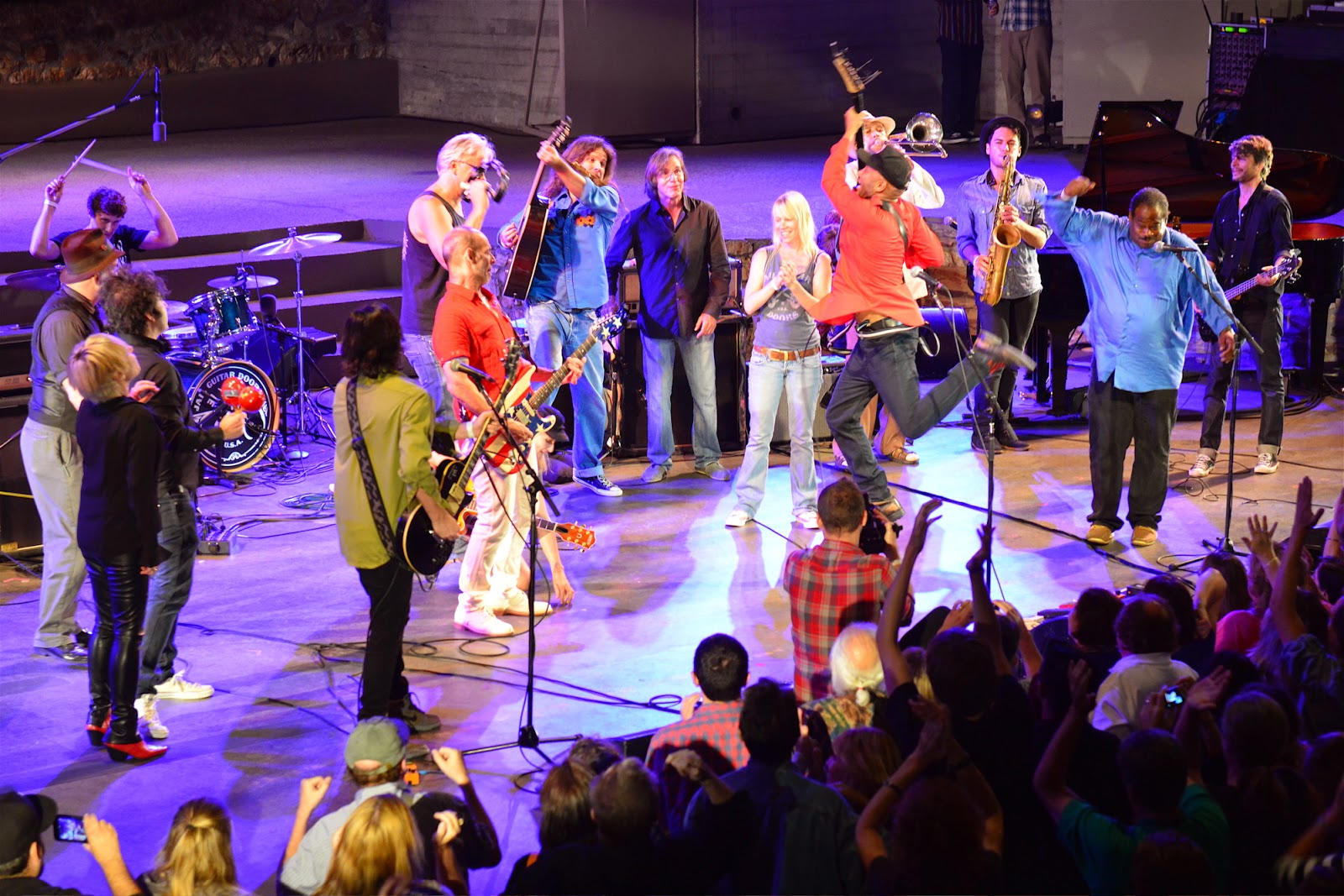 Support Jail Guitar Doors, and the musicians that support them, because they're all doing something that truly matters, all while rocking you silly. Everybody wins!