A Jane's Addiction Weekend On The Sunset Strip

It was all about Jane's Addiction this last weekend in West Hollywood, as it was declared Jane's Addiction Day on September 19. The declaration was celebrated with a ceremony at the House Of Blues on the Sunset Strip, with the band receiving the Elmer Valentine Award for being one of the most awesome bands ever to grace the Strip ... where it all started. 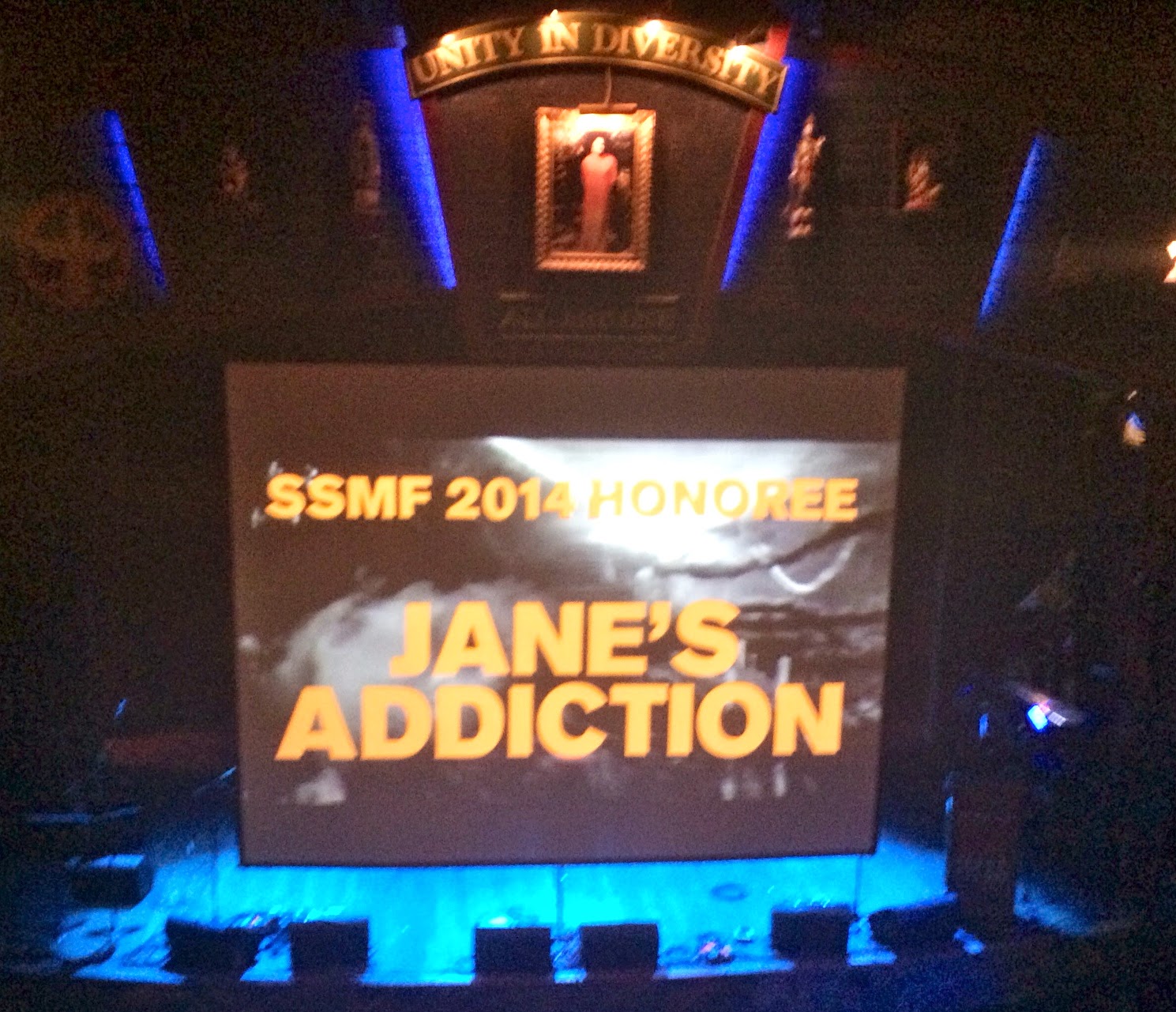 After the red carpet shenanigans, friends and fans milled about inside drinking Jack Daniels (the sponsor of the weekend) and feeling the love for Jane's. 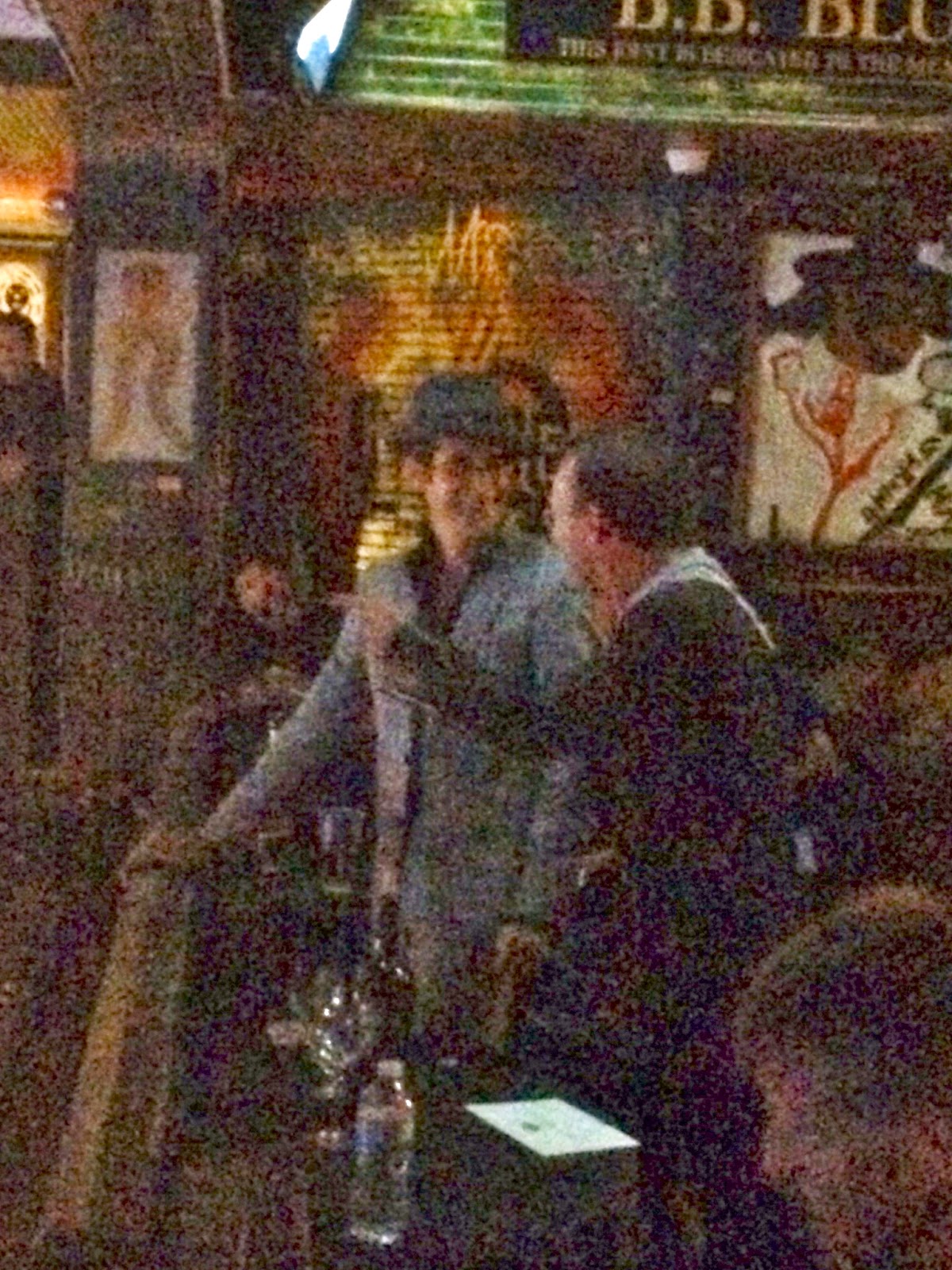 The band, friends and family assembled in the upstairs balcony of the House Of Blues, where they listened as various luminaries spoke about what Jane's Addiction meant to them. Skate legend Tony Hawk introduced the award, saying that back when he was touring around in a van, it was impossible for the guys to agree on a TAPE to listen to on the road ... the only one they ever agreed on was Nothing Shocking (which we were there to celebrate the 25th anniversary of). He went on to say that everyone credits Nirvana for changing music back in the 90's ... but really, it was Jane's Addiction. Truth. 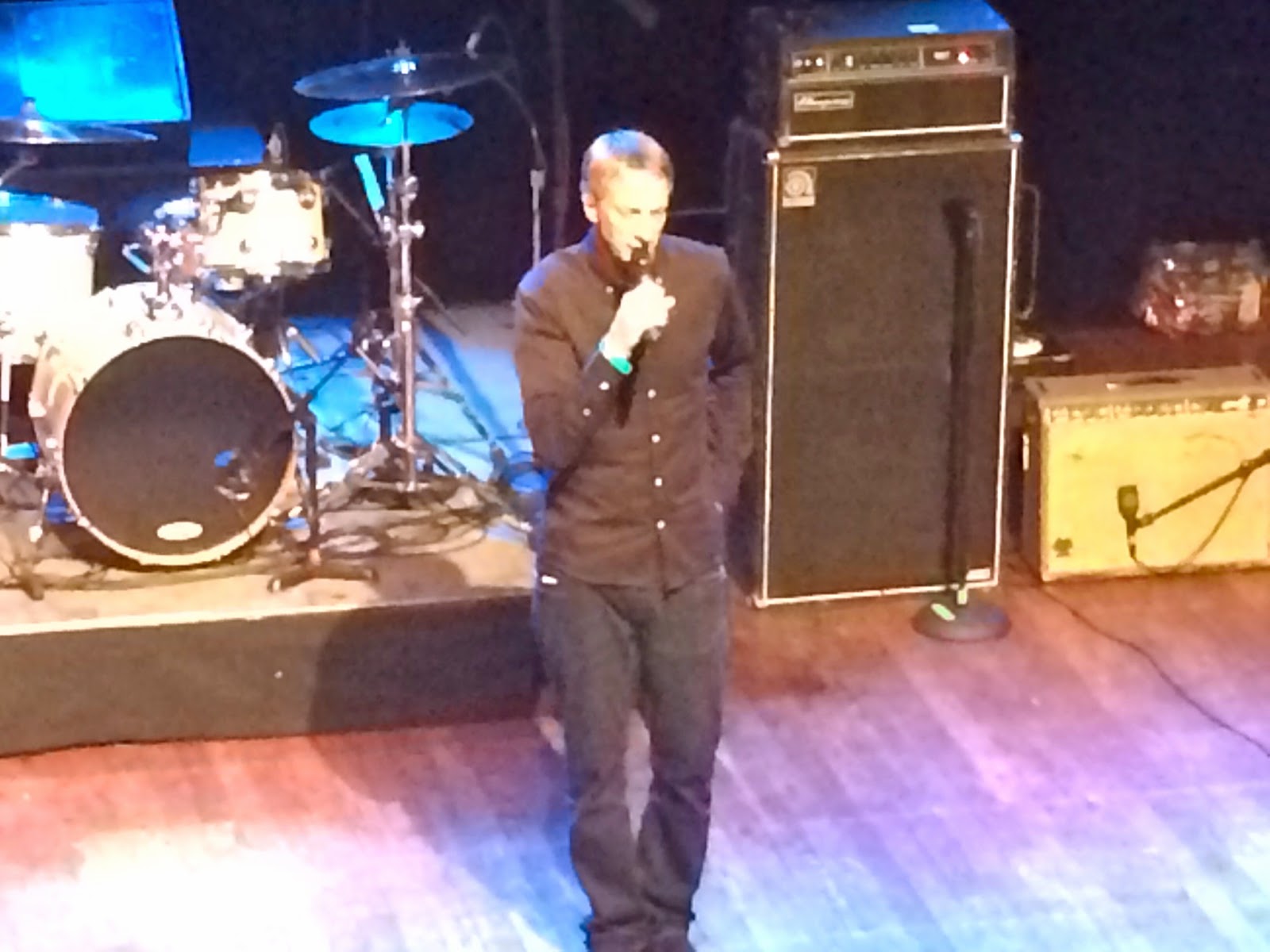 Stryker came out to do the introductions, and Rodney Bingenheimer (both of KROQ fame) came out to swap Hollywood war stories with Perry Farrell. It was evident how much they mutually adore each other. There was a LOT of love in the room, for sure. 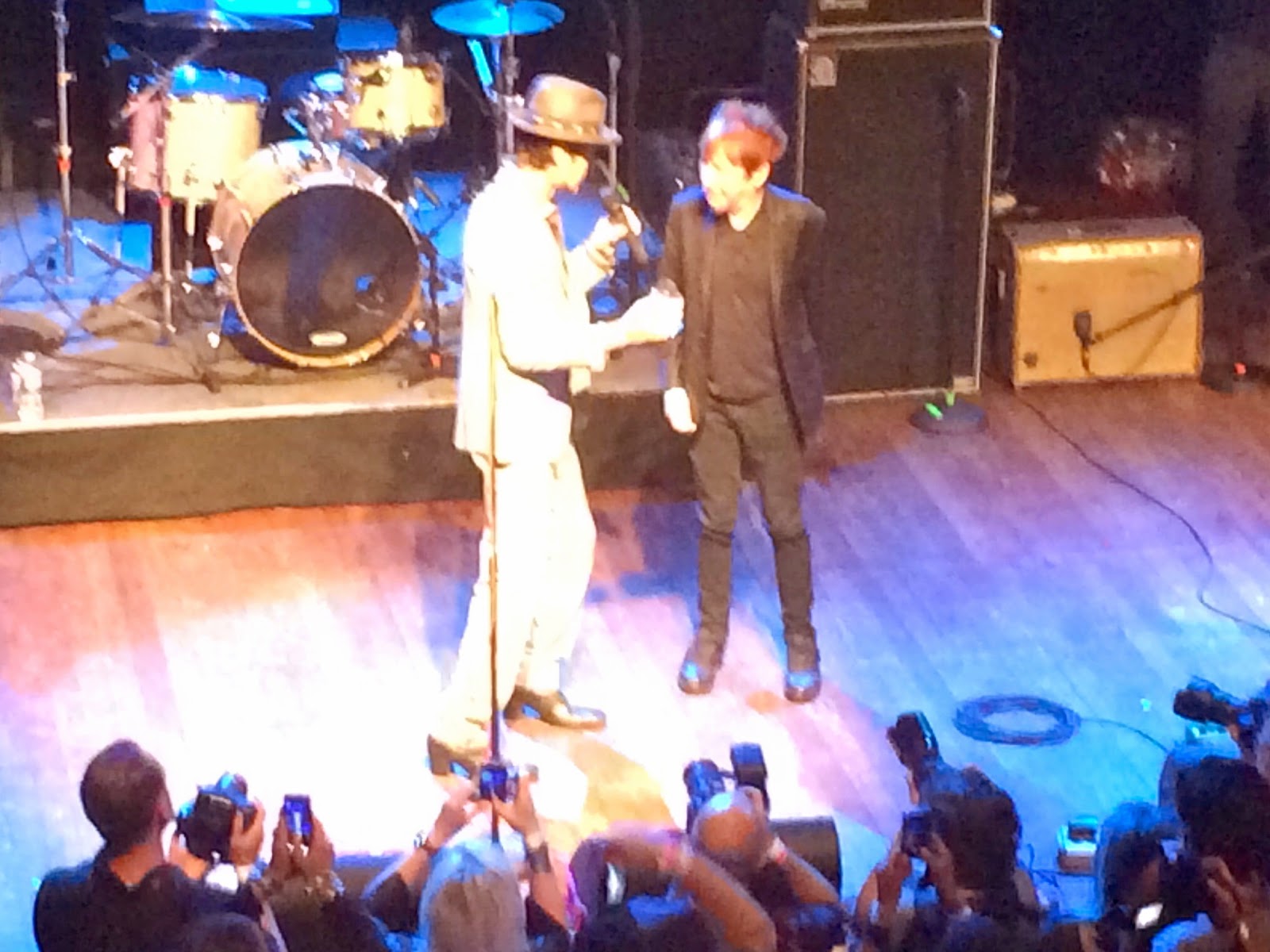 A tribute video of Jane's Addiction through the years screened, and it was great to watch Perry watching himself onscreen, talking about how badass The Doors and The Bad Brains were, and how it was all "Deep as fuck", and how he came up with Lollapalooza as, "I just want people to get out there and celebrate." Which we certainly have, enjoying his epic vision through the years. The Vice Mayor of West Hollywood then came out to present the band with a certificate proclaiming it Jane's Addiction Day, and the crowd loved it. 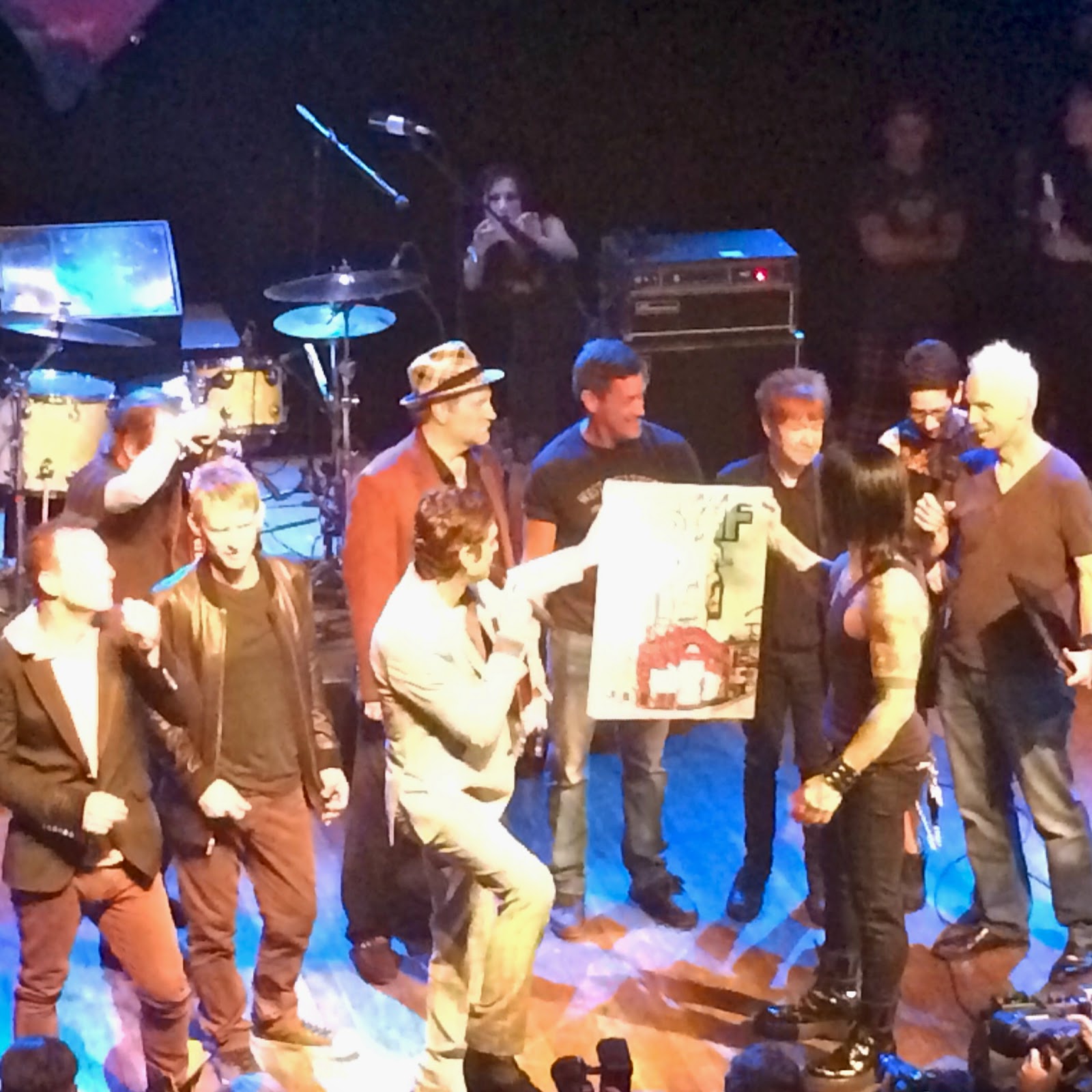 They loved it even more, however, when Farrell mused aloud that they couldn't very well have all these people there to honor them without giving them a song or two ... so they asked the night's band, Dead Sara, if they could borrow their equipment ... and they said yes. So that meant "Mountain Song"! 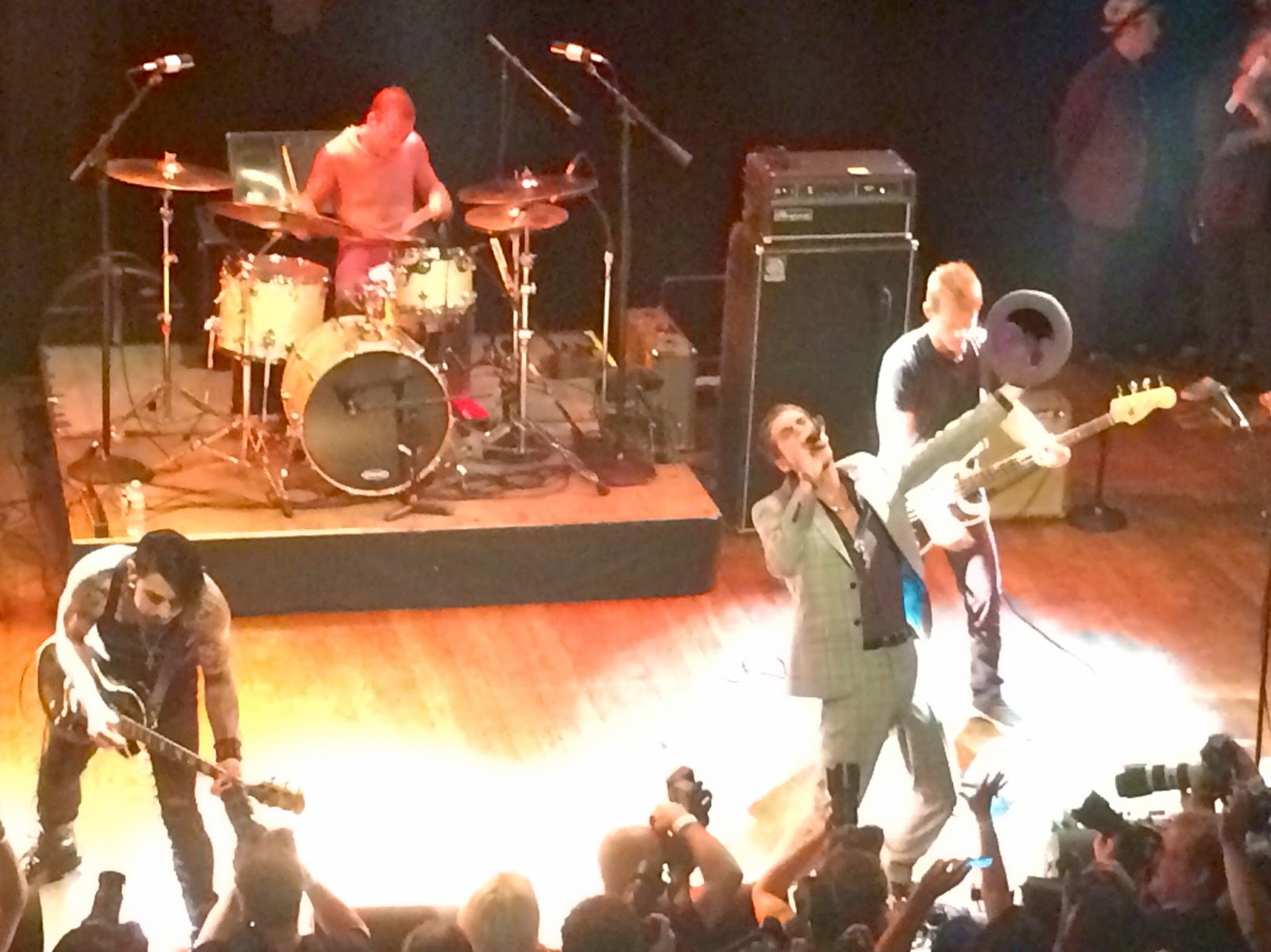 People went SO nuts, that then it also meant "Ain't No Right" from what Tony Hawk had called "The house band of the Sunset Strip." 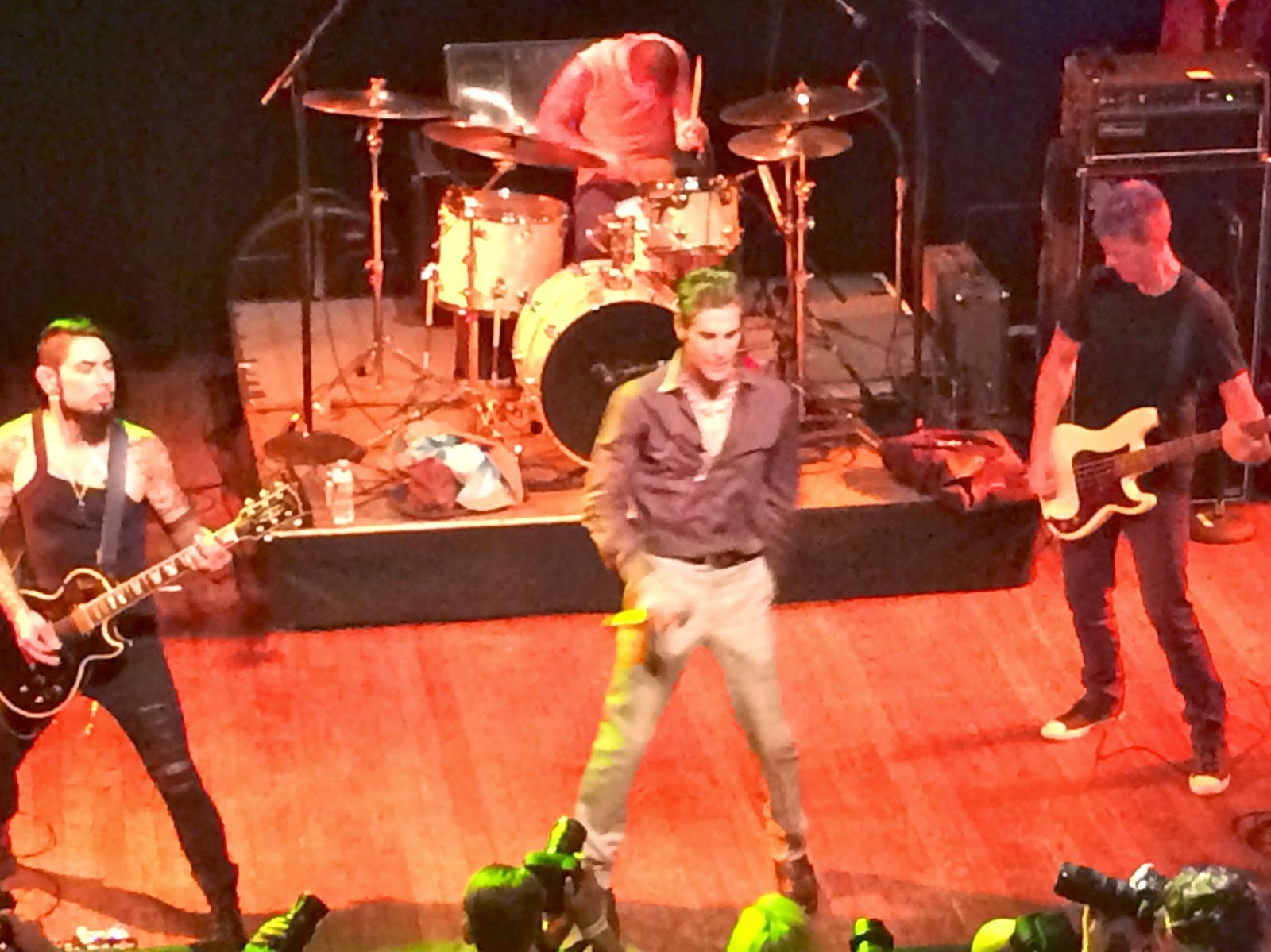 The revelers were thrilled, upstairs and down, including the glamorous Mrs. Farrell. 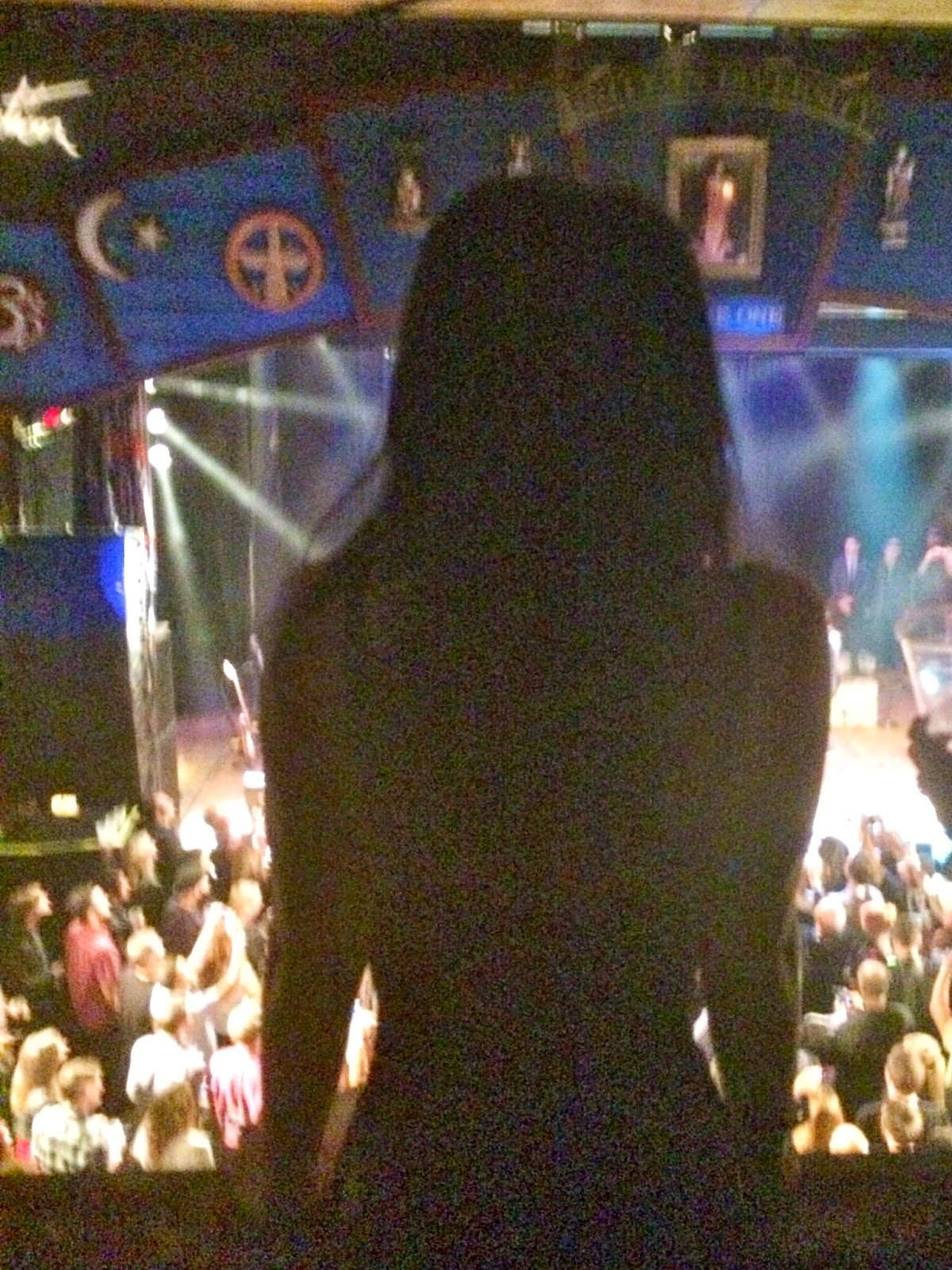 Because it was unplanned (and already an unexpected treat), that was all for then. "We're happy to serve you, L.A.!" It was time to party. 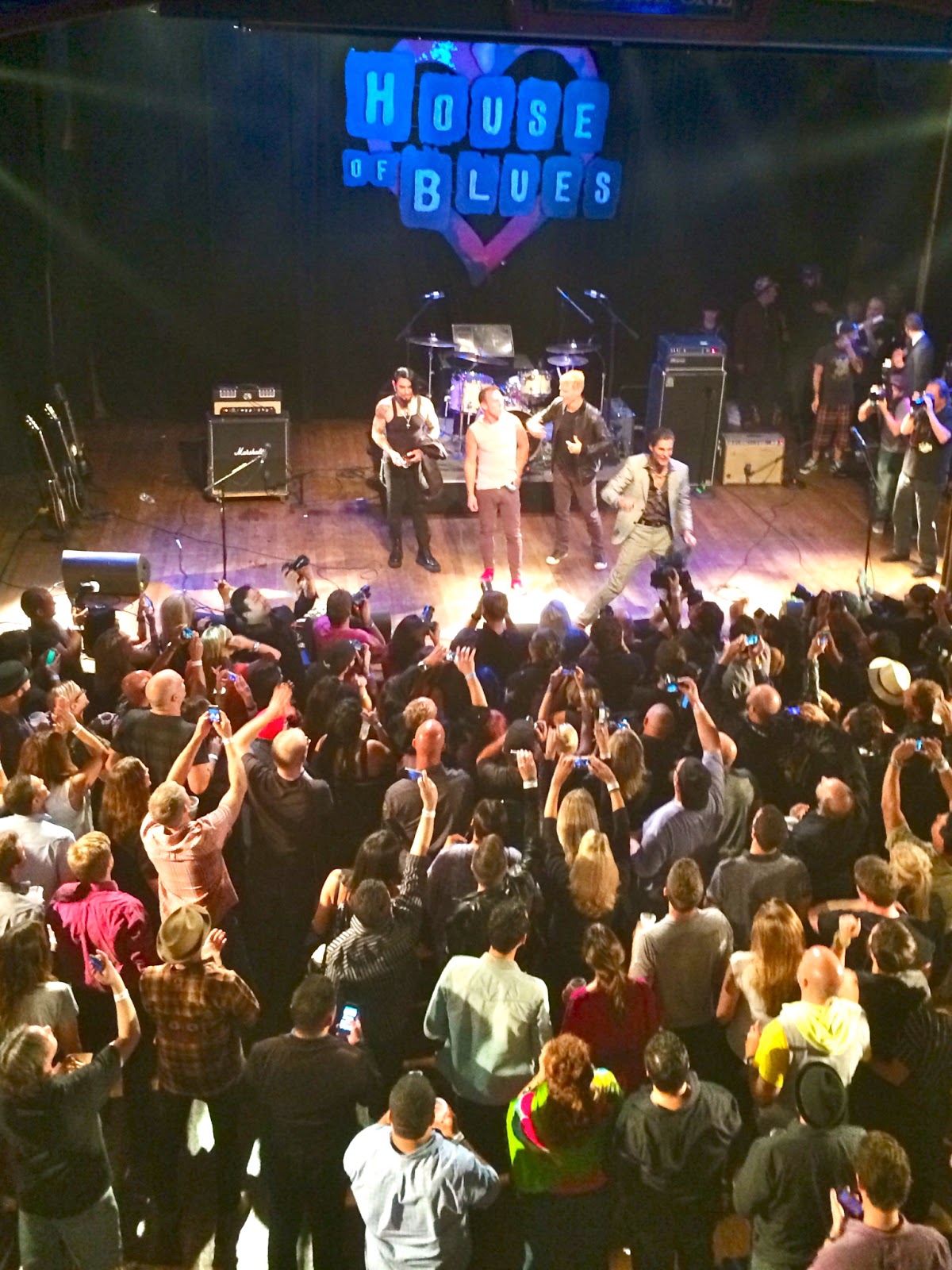 The band and their guests celebrated upstairs until it was time to split and call it a night ... because the next day was the day Jane's Addiction was going to shut down Sunset Boulevard and play Nothing Shocking in its entirety. Again, where it all began... 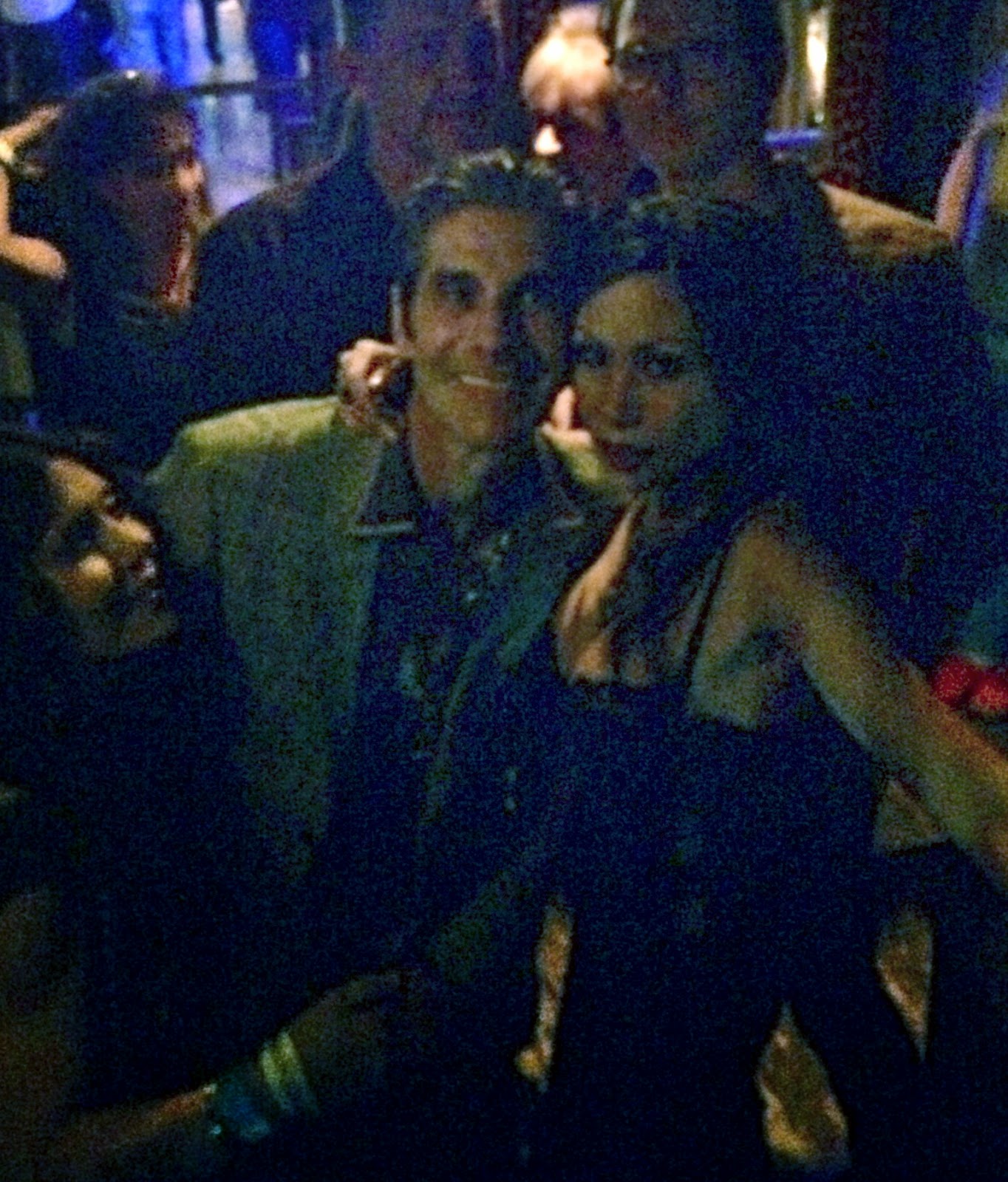 The Sunset Strip Music Festival went on all day Saturday and Sunday, but all I really cared about was Juana's Addicion. I rode over to the festival with the Farrells, and as we approached the venue site, it was thrilling to see the entire Strip filled with throngs of Jane's fans, eagerly anticipating the show. 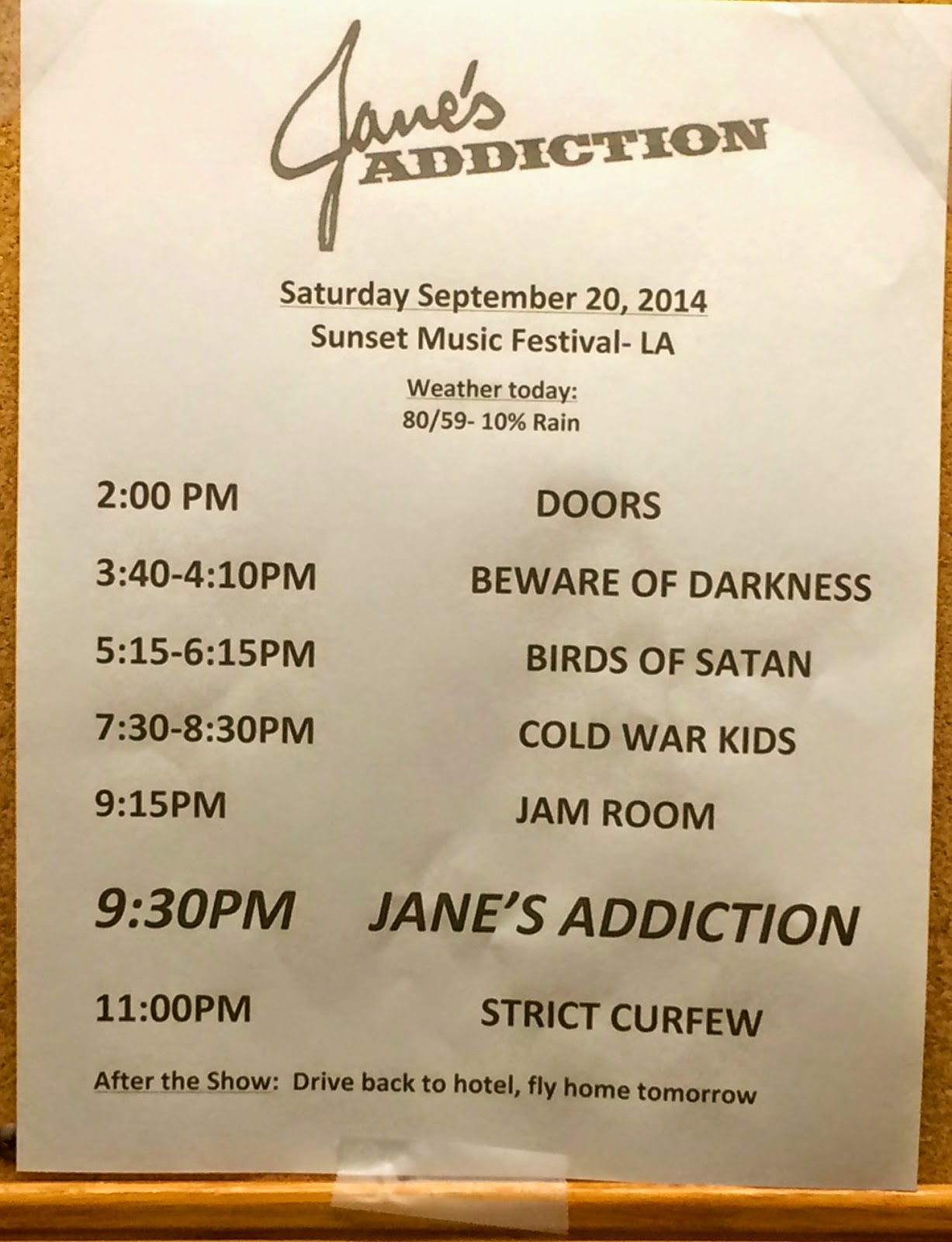 We got there almost right at showtime, so the golf carts sped off and soon the opening chords of "Up the Beach" rang out over West Hollywood. The excitement was palpable. 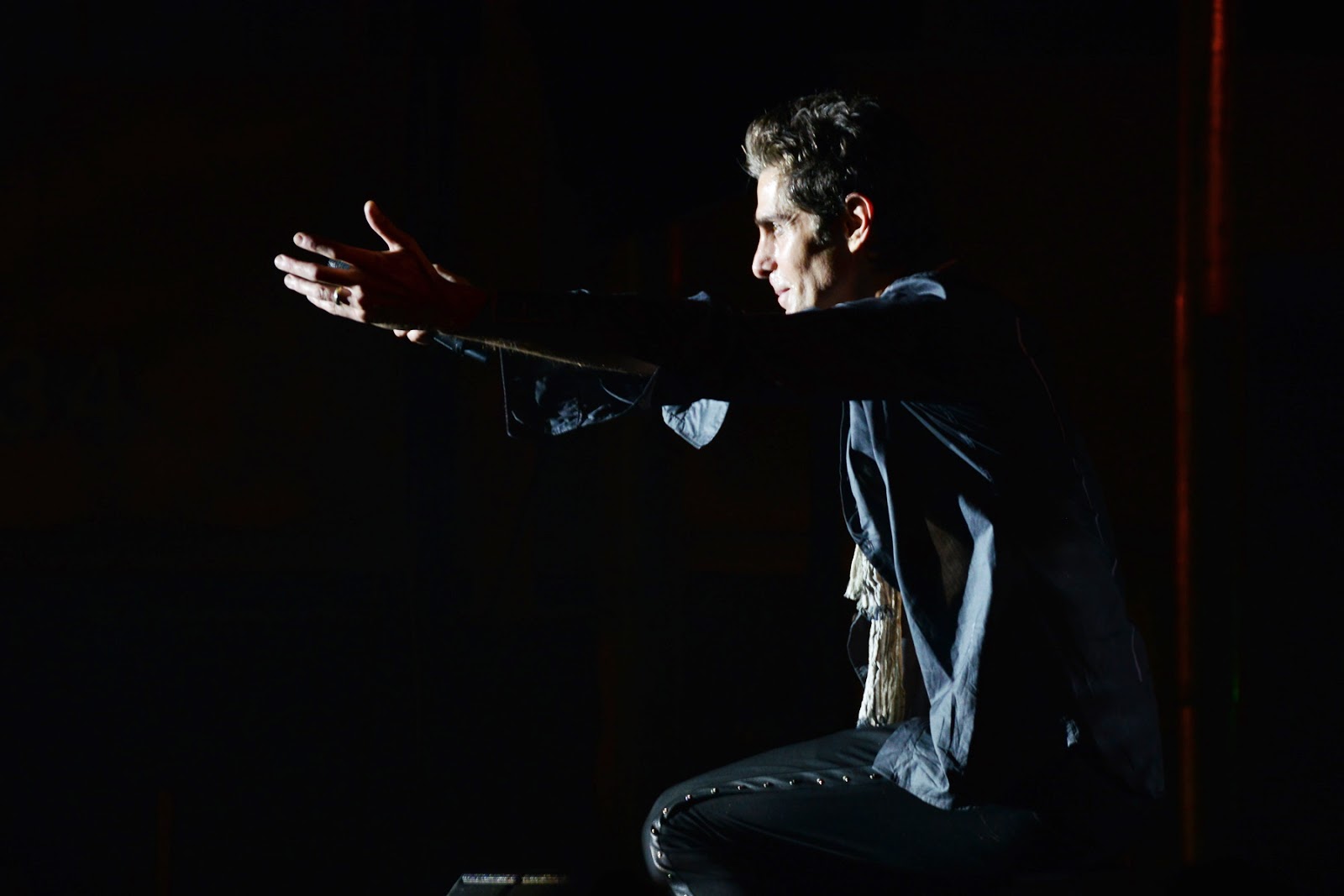 That gorgeous instrumental launched right into "Ocean Size" and the place just went off. OFF! People couldn't contain themselves, screaming and singing themselves along hoarse. Not a beat was skipped before "Had A Dad", "Ted, Just Admit It", and "Standing In The Shower...Thinking", and it was obvious that the band mates of 25+ years (and new-ish bassist, Chris Chaney) were FEELING it, as were the masses of hard-core Jane's Addiction fans, absolutely loving every note. 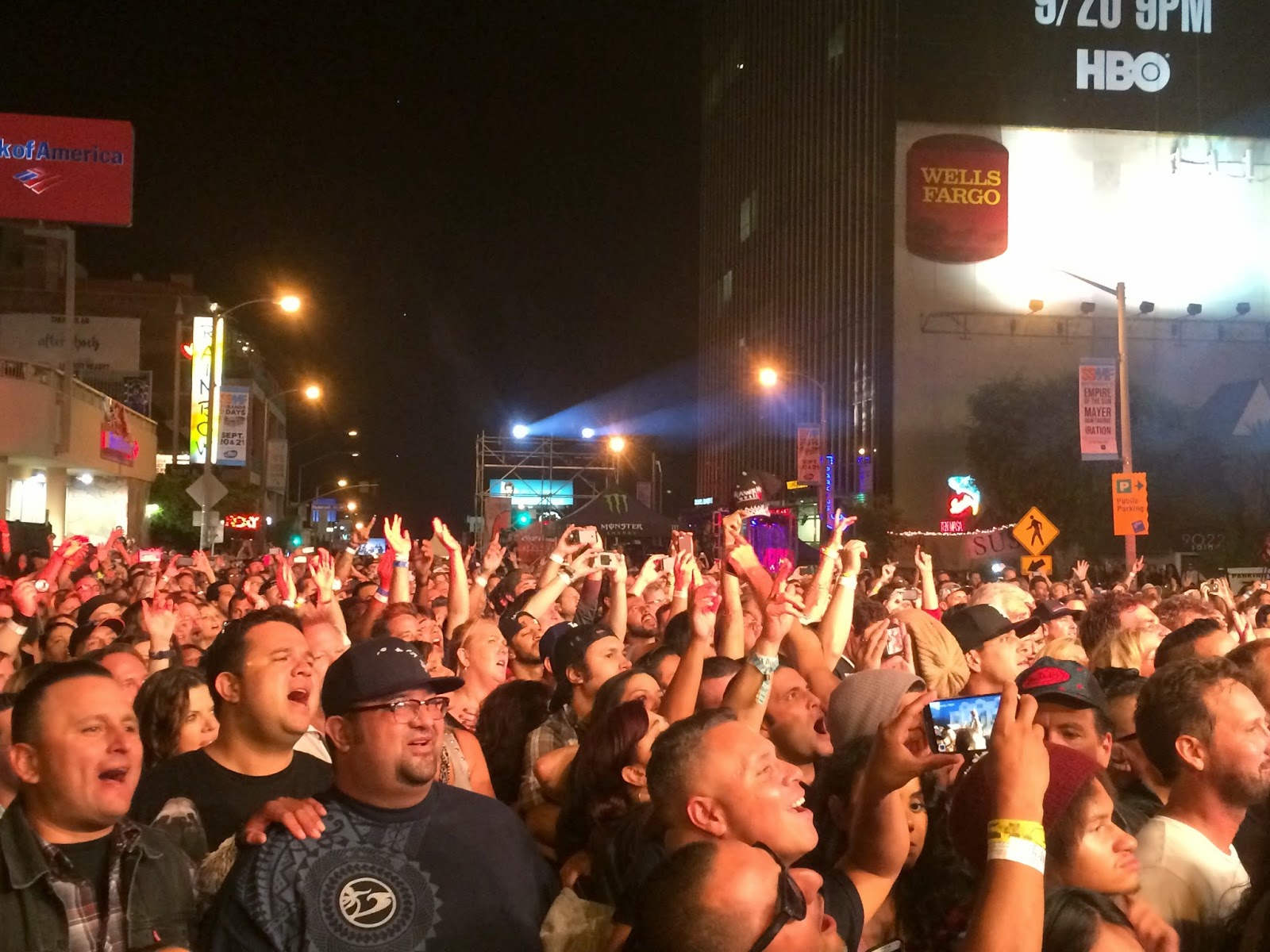 It was then that the opening began to one of my top five favorite songs of all-time, the glorious and majestic "Summertime Rolls". As we're winding down our own Summer here in L.A. (where, yes, it's endless, but still different than official Summer), it was the perfect song to sing along with, feeling so happy and great with thousands of friends that felt the same way. Dave Navarro gave it an extra bluesiness to his solo, lending a perfect air of wistfulness to the song that already embodies dreamy nostalgia. I love it so, so much. I was grinning ear to ear at this point, and I was not remotely alone. 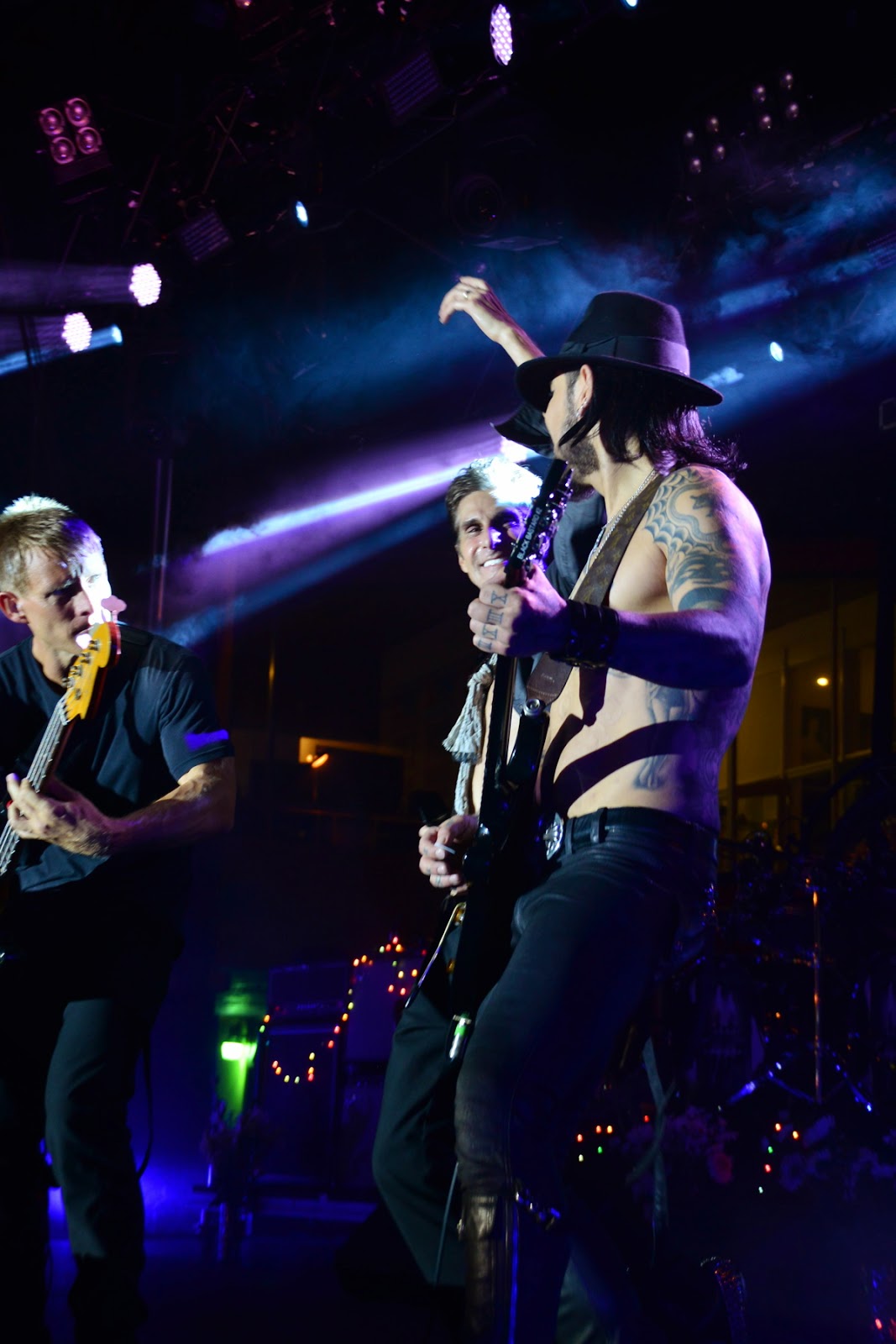 That dream come true was followed right up by many peoples' all time favorite jam, "Mountain Song". You can see Foo Fighters drummer (and big Jane's Addiction fan), Taylor Hawkins, here in this little video, absolutely feeling the stoke you get every time from this monster of a song.


There was hardly a moment to catch our breath before they blasted into "Idiots Rule", which DID rule. 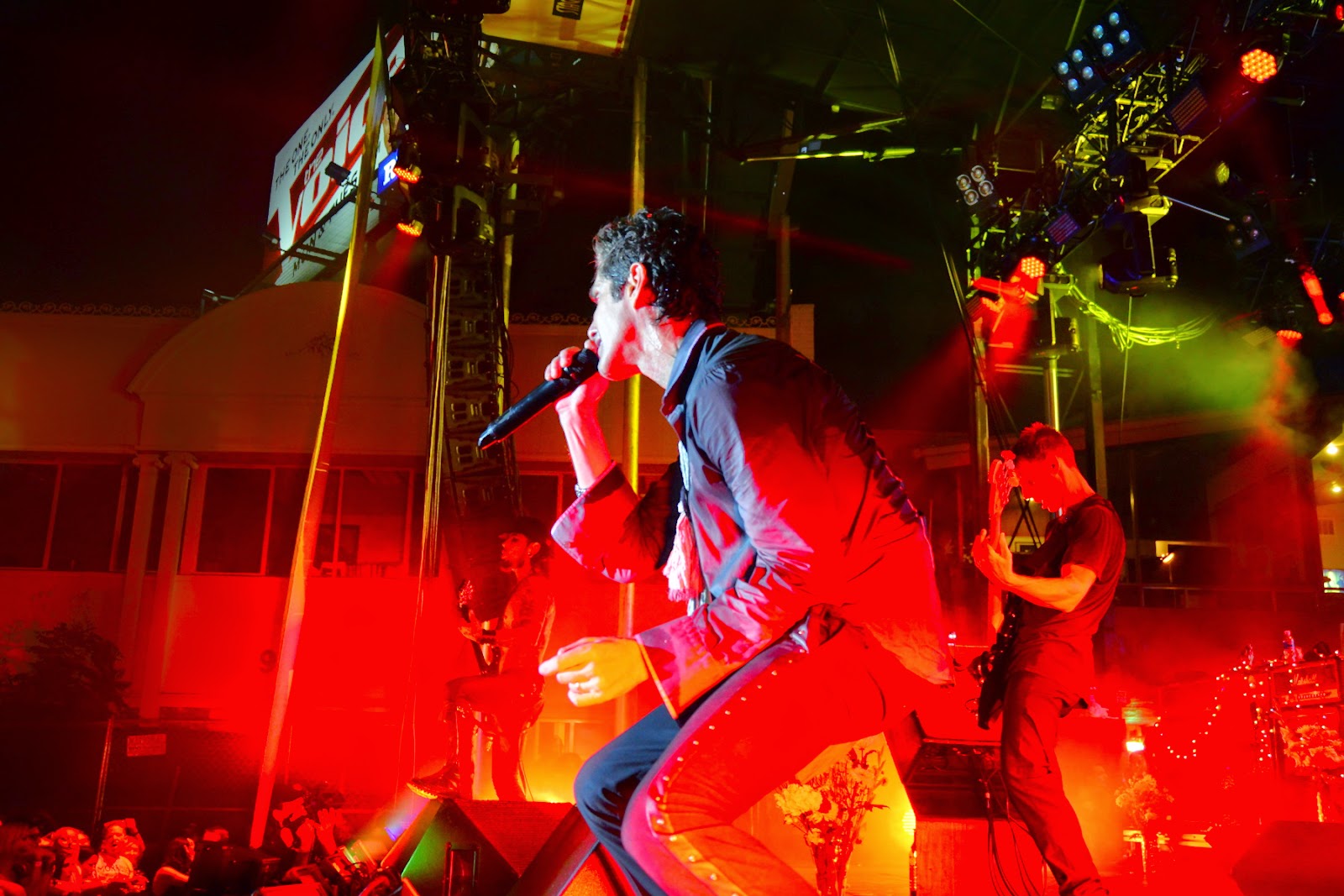 Then Perry told a story about how they got a little jaded a while back and didn't always want to play their big "Jane Says" hit ... but then thought about how he'd feel if he went to see Lou Reed and he hadn't played "Heroin", he'd have been bummed ... so back in went "Jane Says". 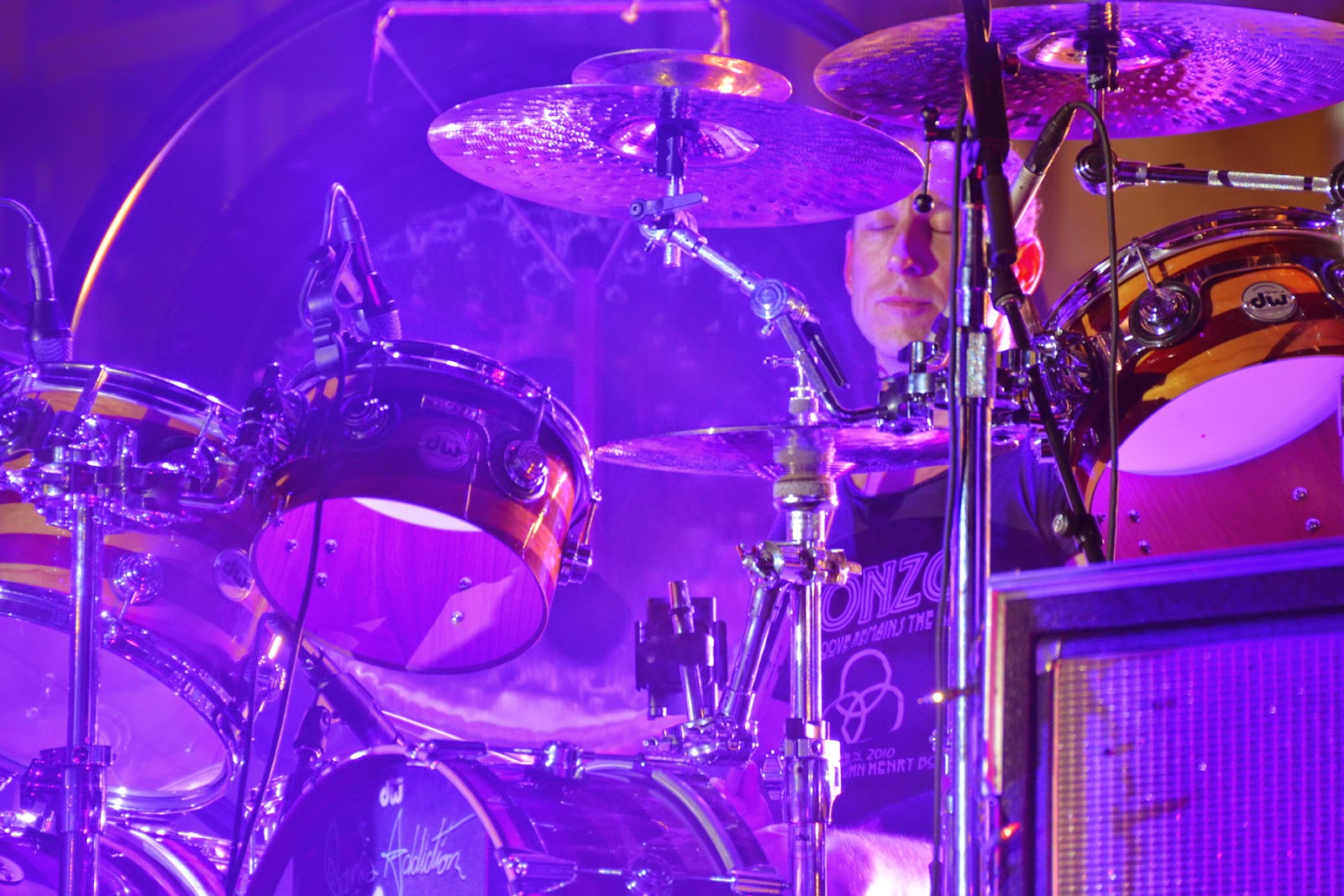 Thankfully, to judge from the reaction of the crowd, who happily sang along to every word of the steel-drum version that found the awesome Stephen Perkins and Chris Chaney joining Farrell and Navarro right up front.  In another nostalgic moment, Farrell said at song's end, "Oh, there was so much drugs back then ..." Yep. 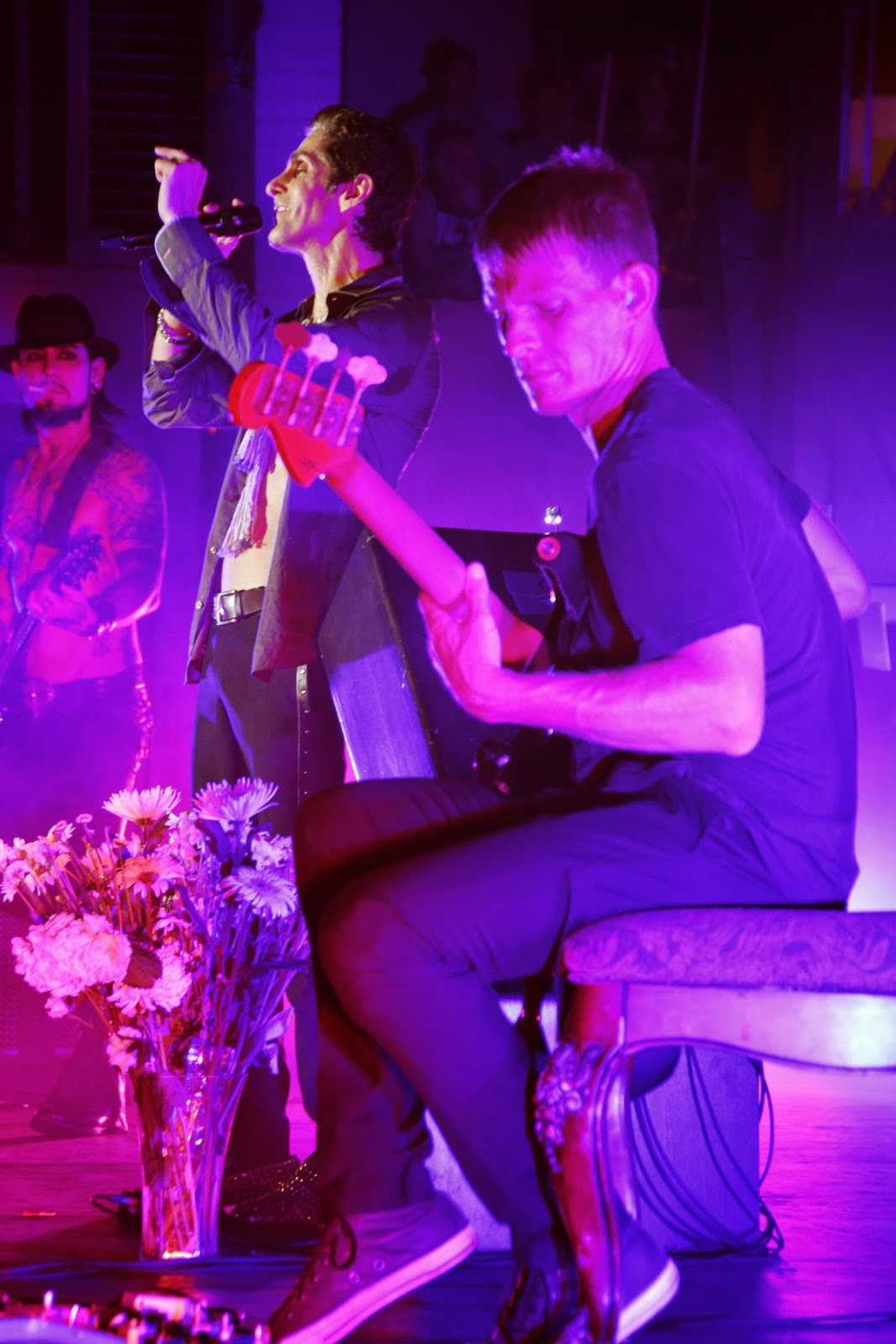 When the fans went completely up into orbit after that one, Farrell thanked them, saying, "It's the greatest honor playing for people on the streets of Los Angeles, here is where we really shine... They didn't ever really appreciate us in New York, because they know we're not theirs. We're yours." Well, that's all the crowd needed to go even more crazy, which they absolutely did for "Pigs In Zen". And should have, because it was AWESOME. 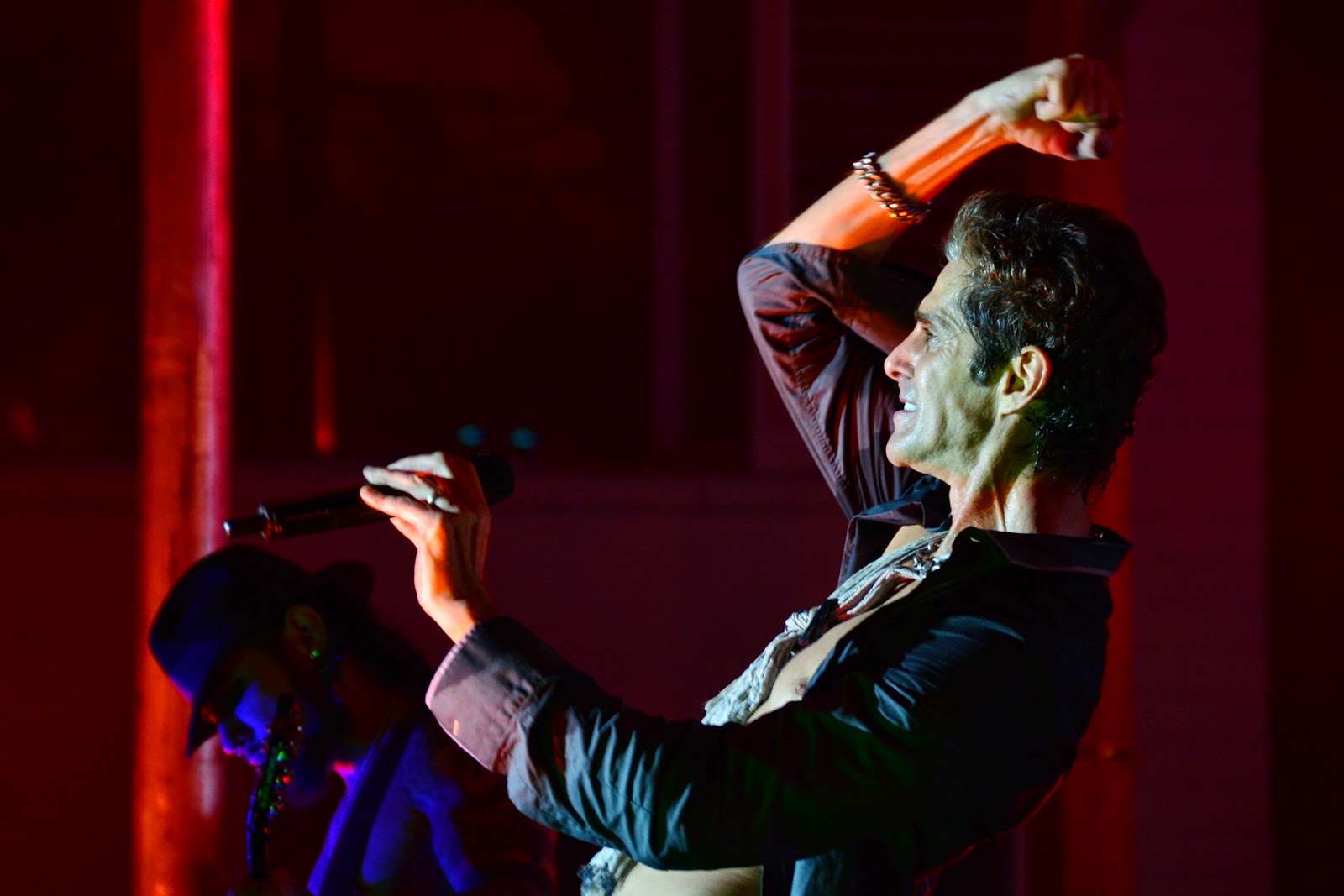 There was a brief interlude while everyone screamed for more, which they got. Jane's came back and blasted everyone with the one-two punch of "Been Caught Stealing" and "Just Because". It was so rowdy and packed with ecstatic fans that it couldn't get much crazier. You thought. 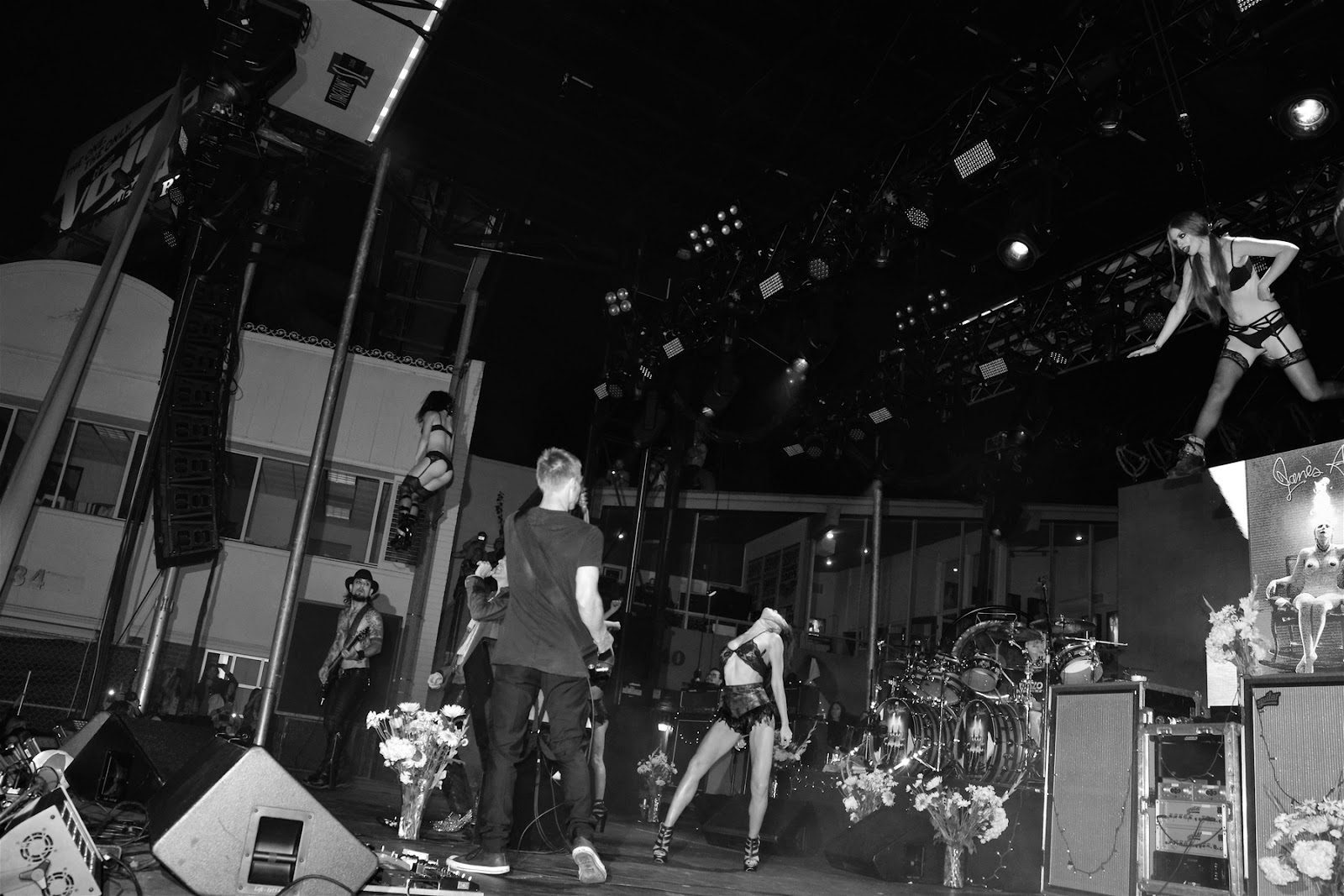 Then for the real knock-out, Jane's brought out their suspension artists and dancers, meaning that for the  literal show-stopper of "Stop!", they had ladies swinging from rods pierced through their shoulder blades high above the stage, and hot dancers (including Etty Farrell) firing up the entire Strip. 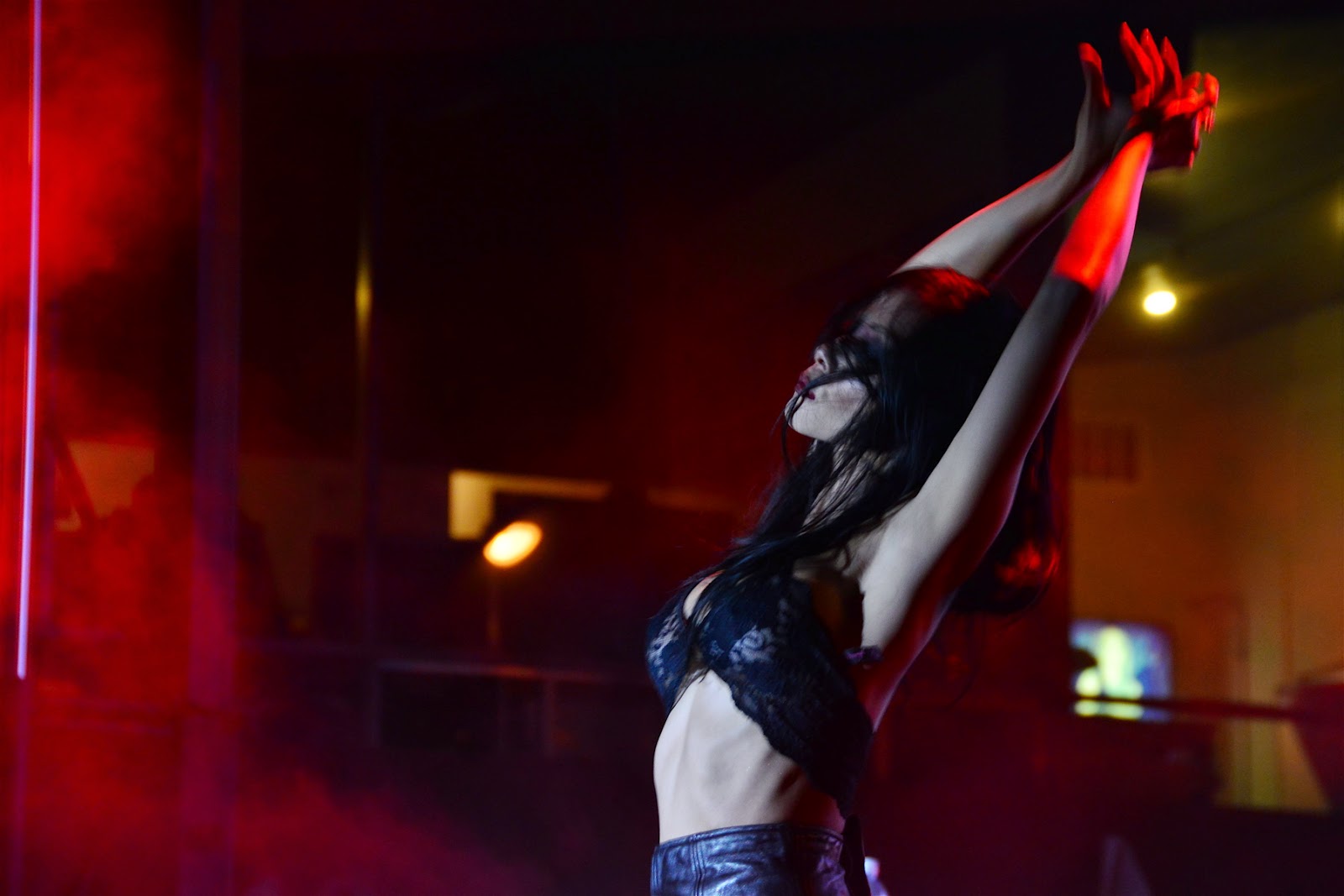 The band was in rare form, and seemed like they could've played all night, and probably would have, were it not for that dang curfew. 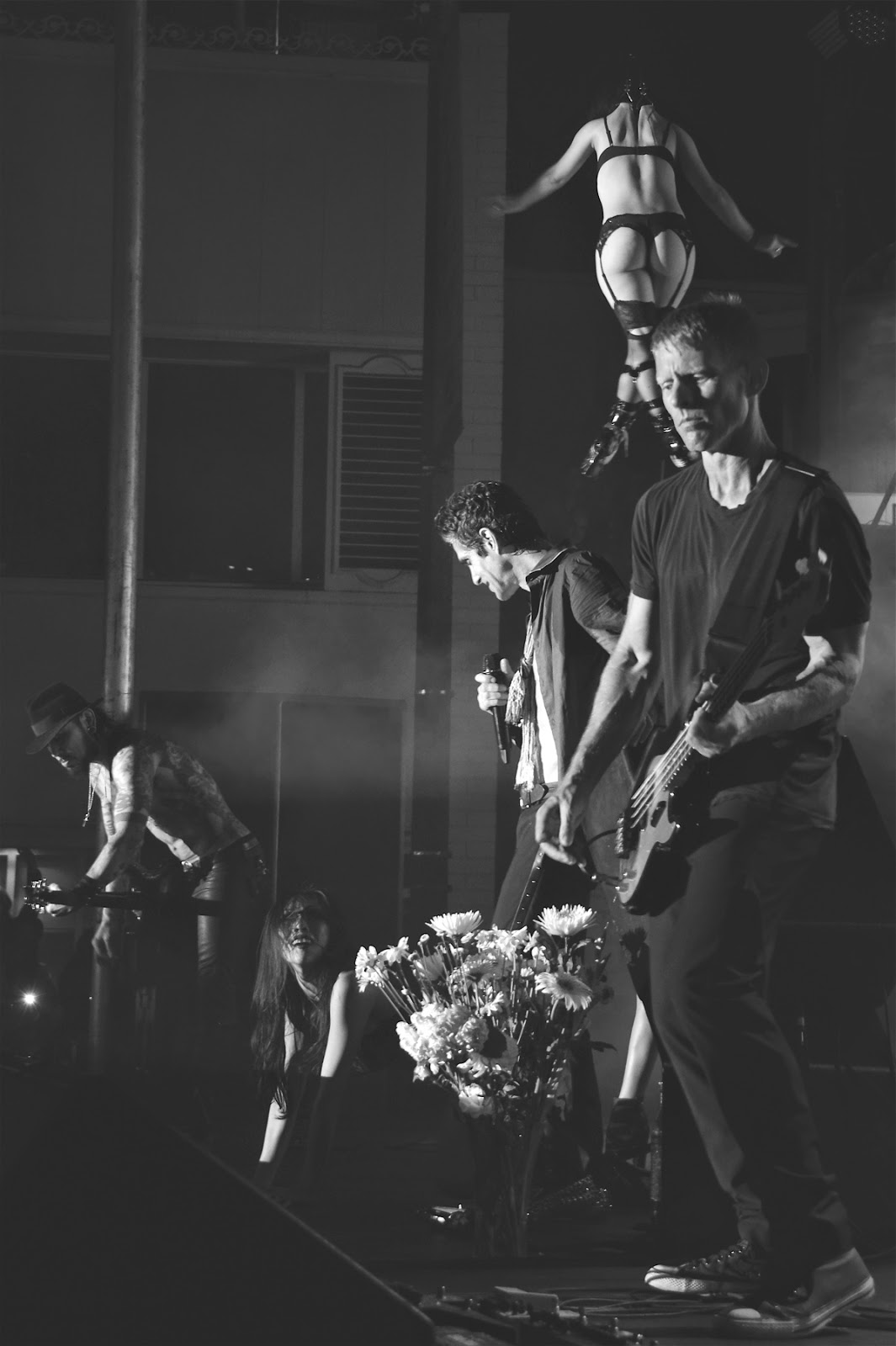 As Farrell stated, "L.A. was always the place. We'd play just as hard for three people as we did for all of you. I'd fill a bus with people from Venice (!!!) and bring 'em all to the show...and tonight we shut down Sunset Boulevard! What a great night!" 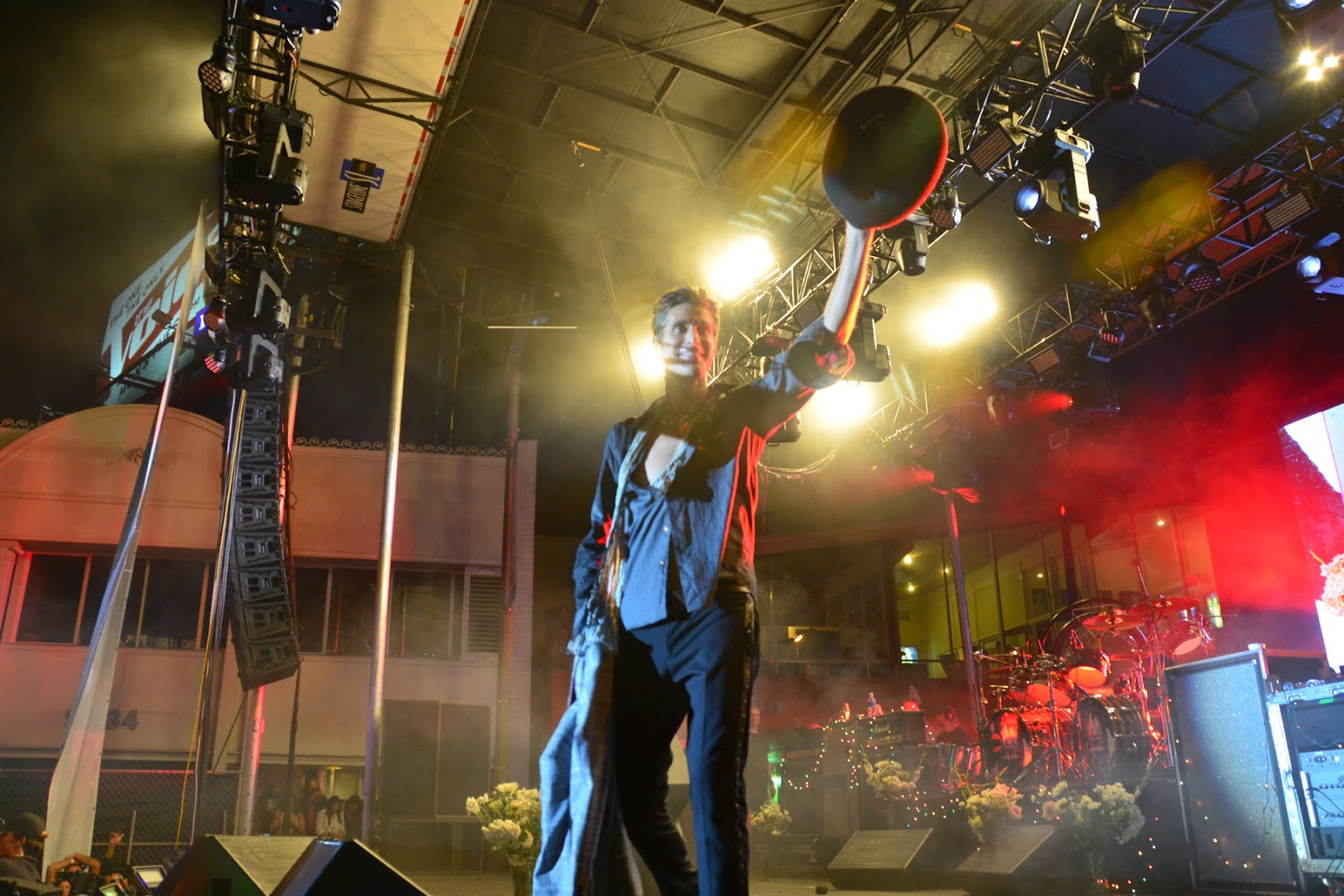 So it was, that performers and fans beamed at each other, mutually thanking each other for the now many great years of music given and appreciated, no, LOVED, by so many. 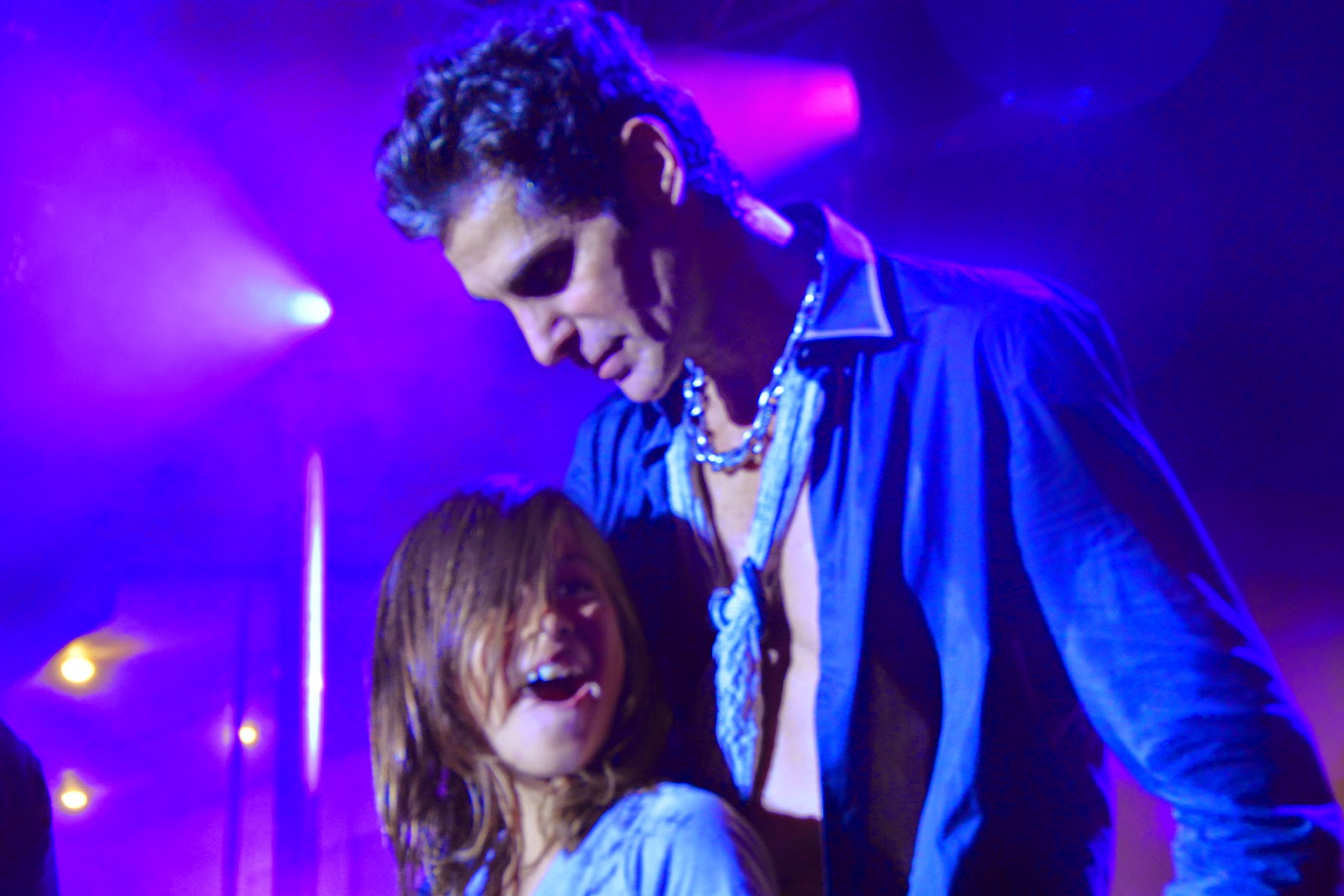 To hear it live, in its entirety, on the Sunset Strip that may as well be a fifth band member, so steeped are the songs in its history ... well, it was just a night that anyone there will forget. Ever. 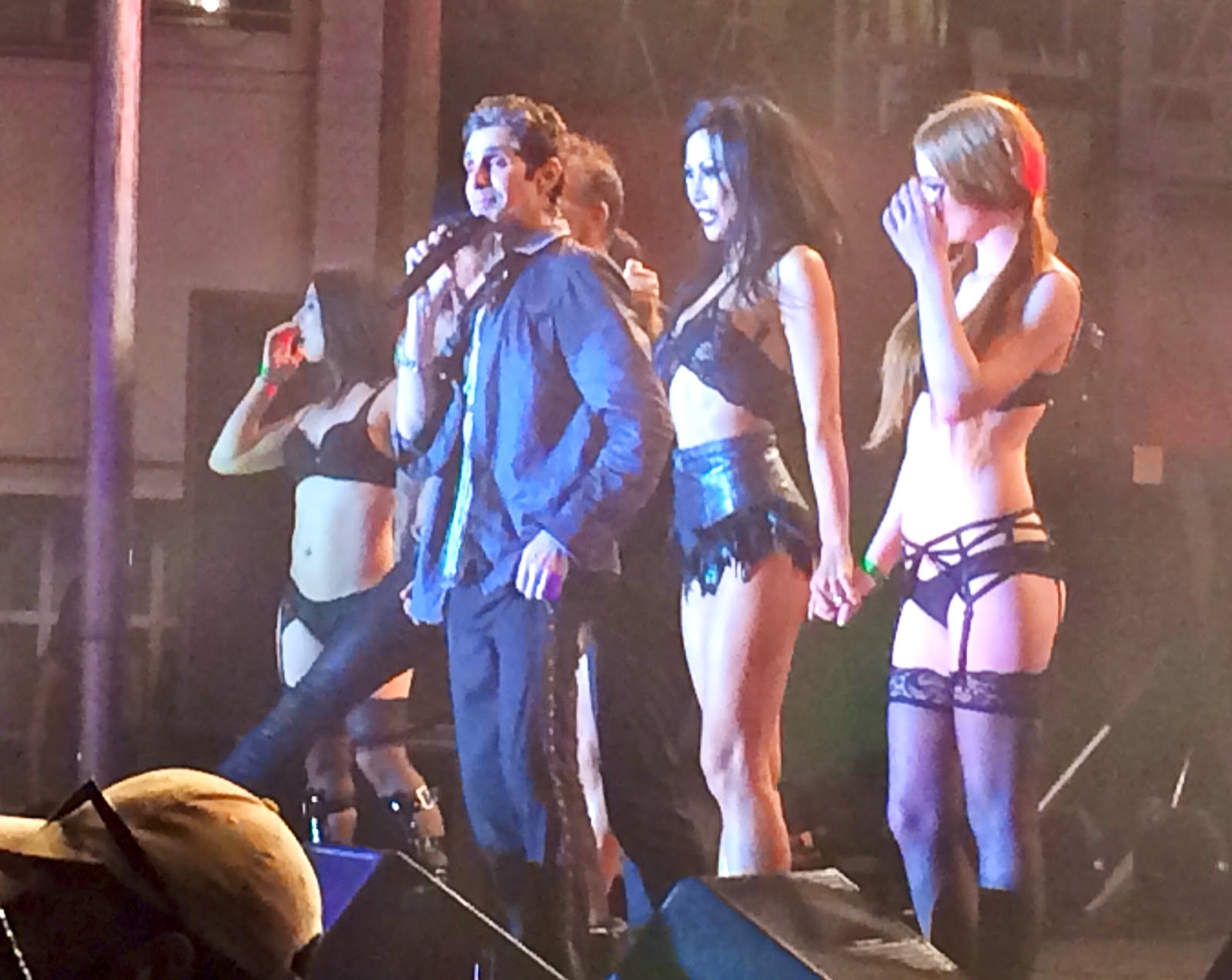 Backstage, it was both excellent and fitting that the Farrell children, Hezron and Izzadore, entertained themselves in the jam tent, making up their own beats and words. The family business is in good and capable hands, dear friends. 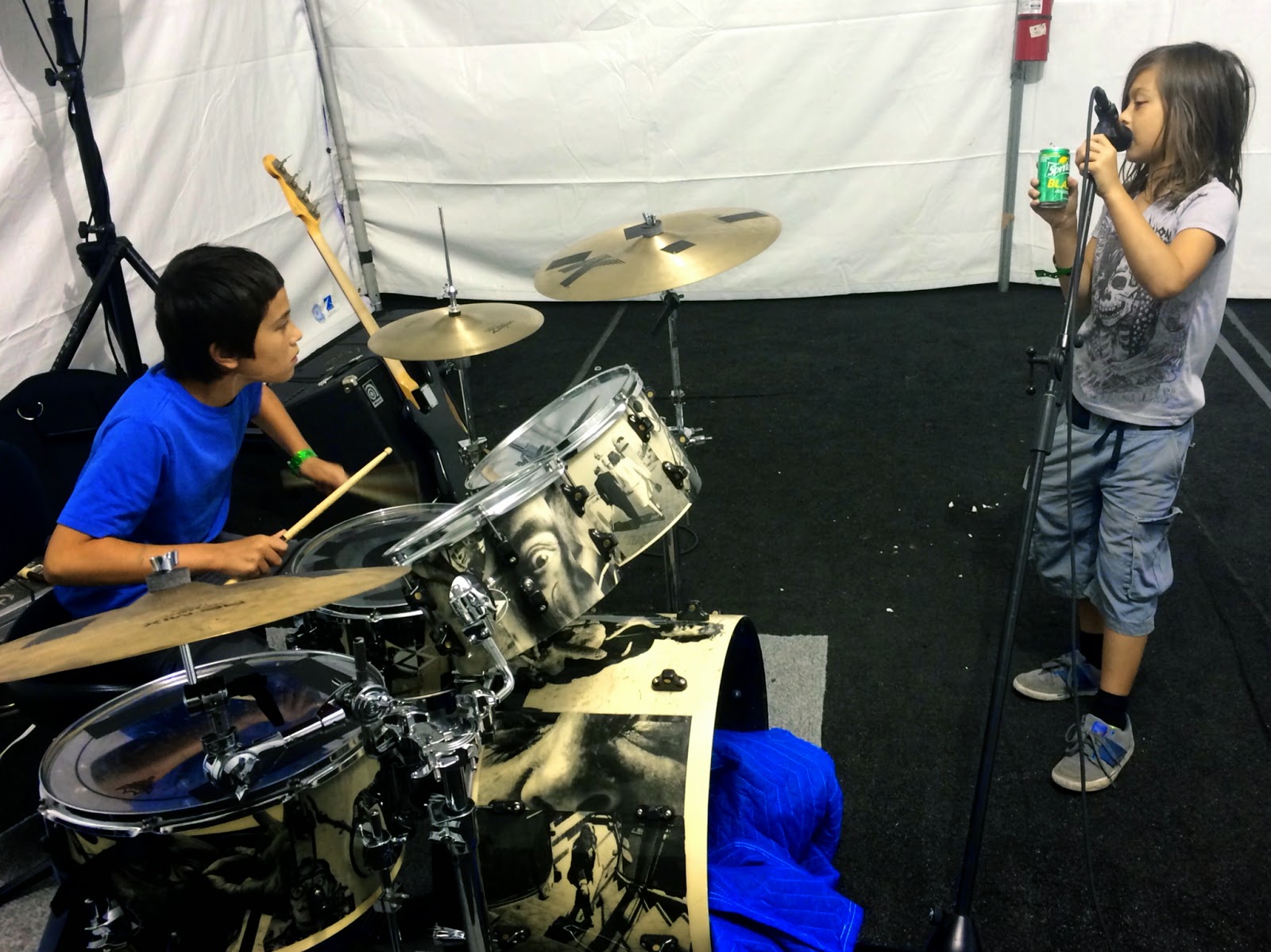 Dear friends. I'm so grateful to call the Farrell Family dear friends. After loving the music for so long, to be able to know, understand, and love this family is - to rip off the Jane's Addiction movie title - a true Gift. 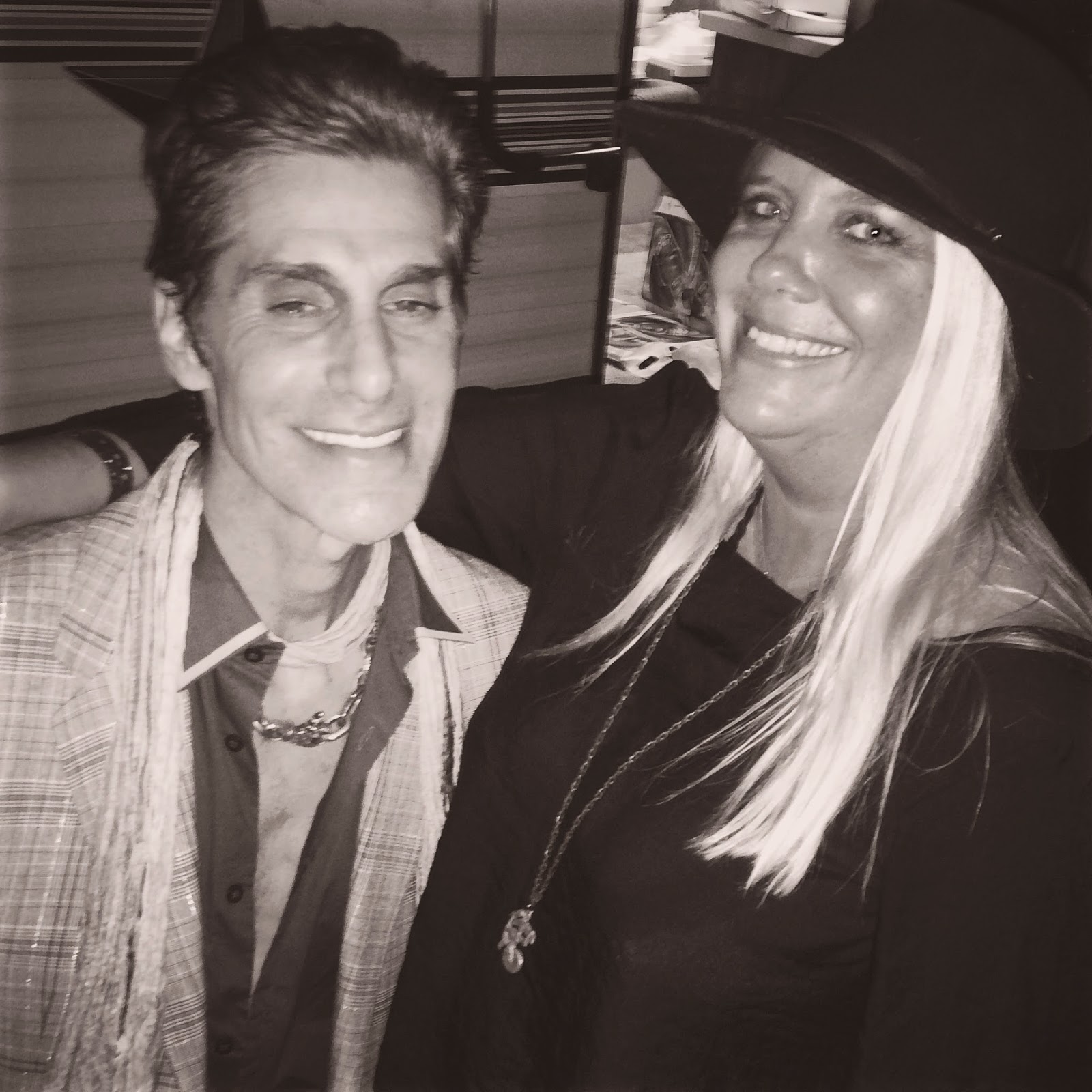 Thank you for the music, the friendship, and the creativity that goes into every aspect of the Jane's Addiction/Farrell/Lollapalooza worlds ... it has factually made the world such a better place. A better place to celebrate ... just like Farrell envisioned. 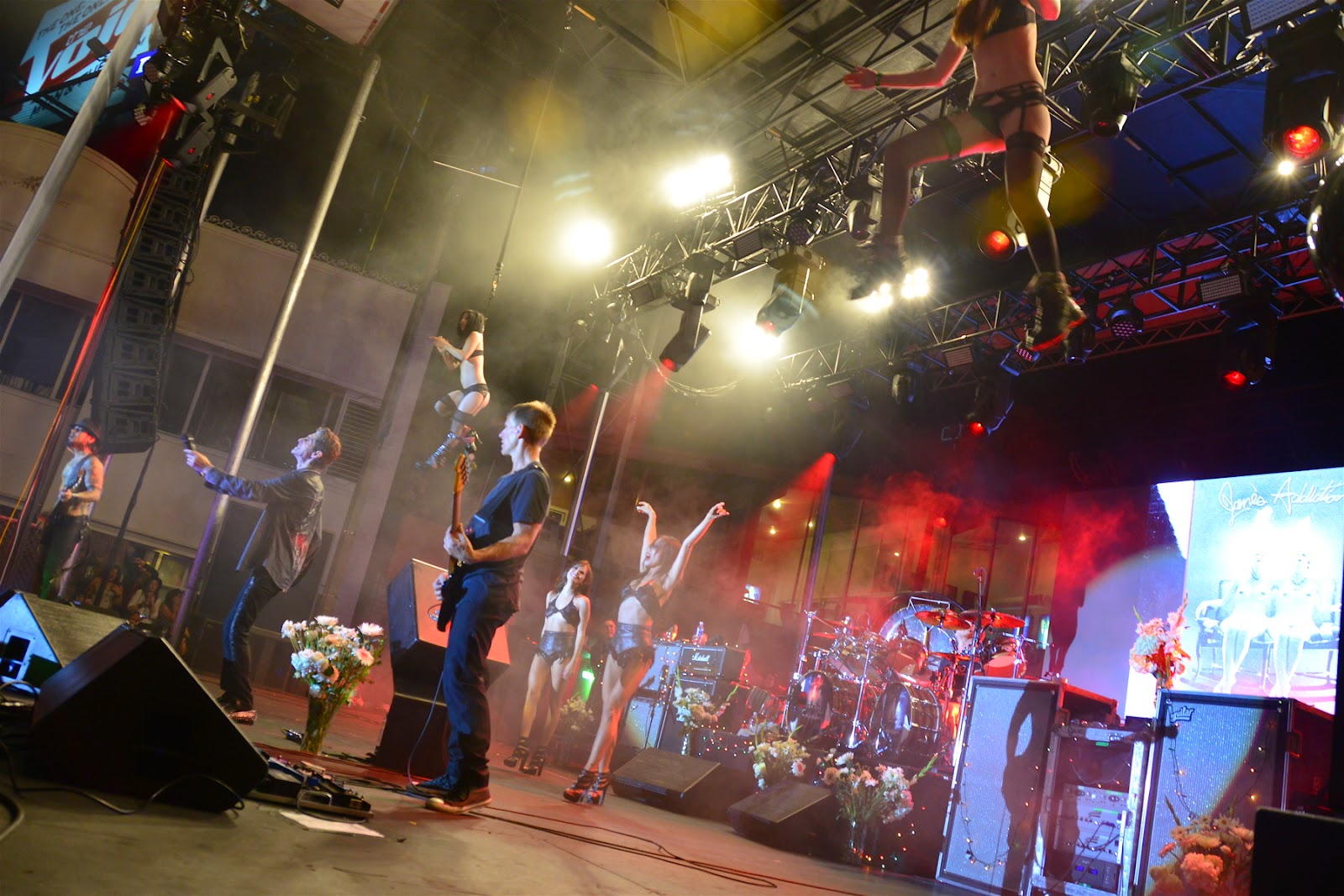 Happy 25 years, Jane's Addiction!!! It feels as great as it ever did.