Last night was the big George Harrison-A-Thon show at the Fonda theater in Hollywood, affectionately called George Fest. It was really one for the ages, People. More a matter of who DIDN'T get up there and play. For real. 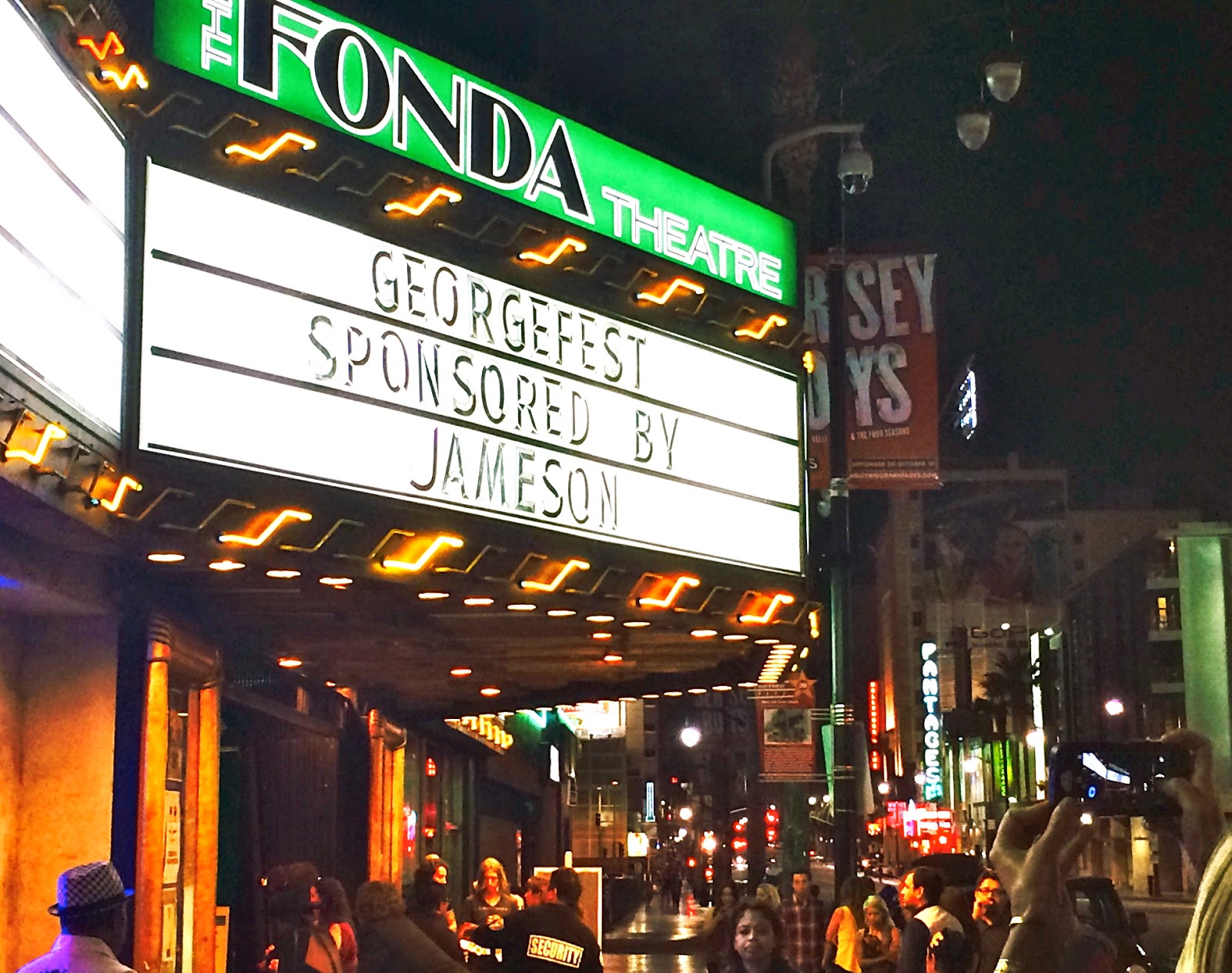 I had spent the day at the Abbot Kinney Festival going nuts, so it was a true test of endurance to first, get to Hollywood at all, and second, hang in there for this many-hours-long show. I did not make it to the end, I confess, but I sure did see an awful lot while I was there. For instance ...

We missed a few openers like the tight house band led by George's son, Dhani Harrison, and I heard Conan O'Brien threw down "Old Brown Shoe". Wow. I got there just in time to hear the end of the darling guys of Jamestown Revival singing "If I Needed Someone." Bam. Just like that, I have a new crush. 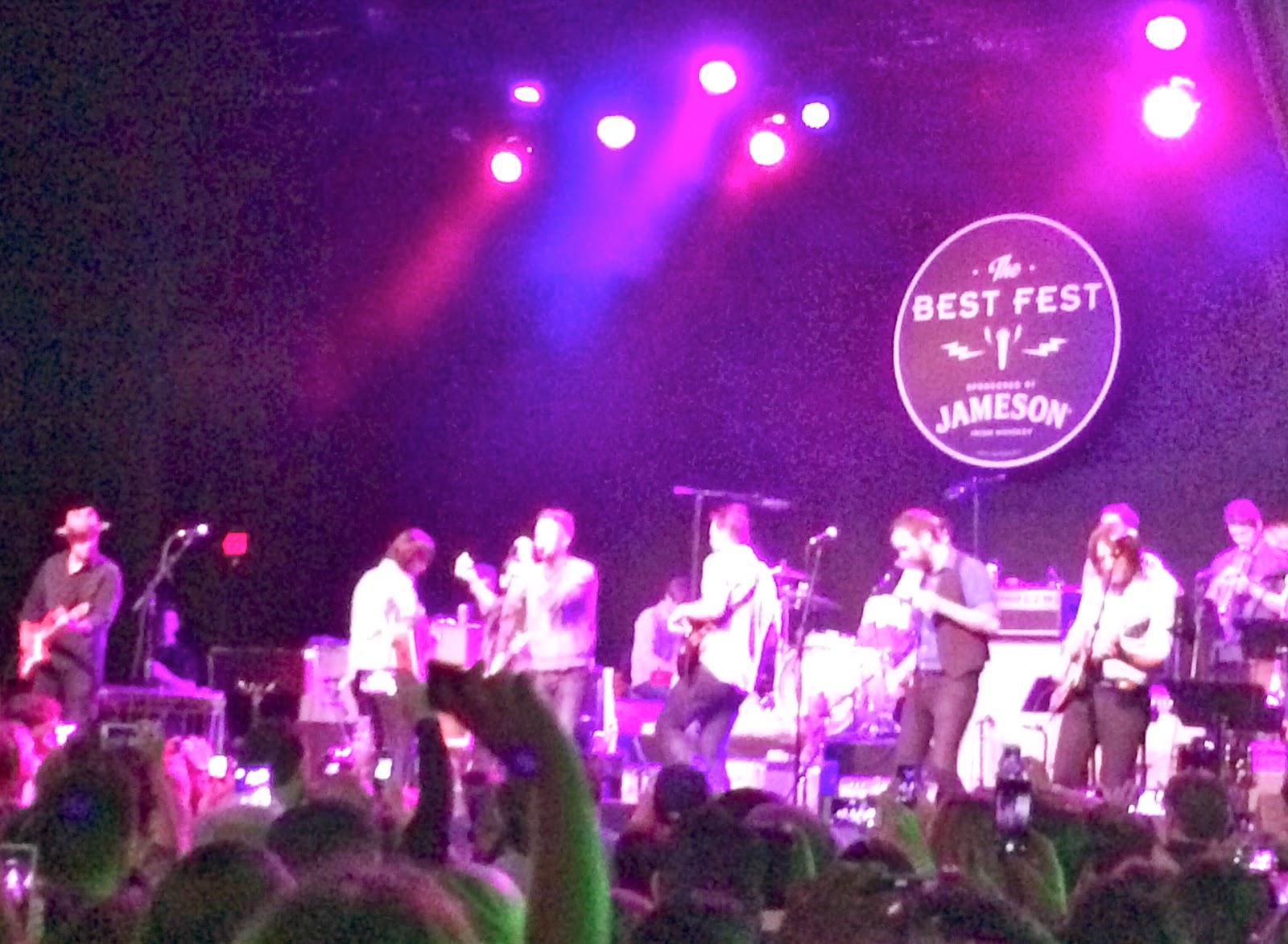 The Black Ryder played "Isn't It A Pity", followed by Chase Cohl (and Brian Bell of Weezer) with "For You Blue". The stage was almost as packed as the audience, where people stood on tip-toe the whole night to catch a glimpse of who was all cramming on up there. Like The Heartless Bastards' (who I love) rendition of "If Not For You." So good. Butch Walker got up and sang "Any Road", The Cold War Kids did "Taxman", and then The Cult's Ian Astbury really delivered with "Be Here Now". I was standing next to Jerry Cantrell (Alice In Chains) during this number, and we both just went "Wow. That was awesome." when Mr. Astbury was done. And whistled real loud. I think it was my favorite of the night. 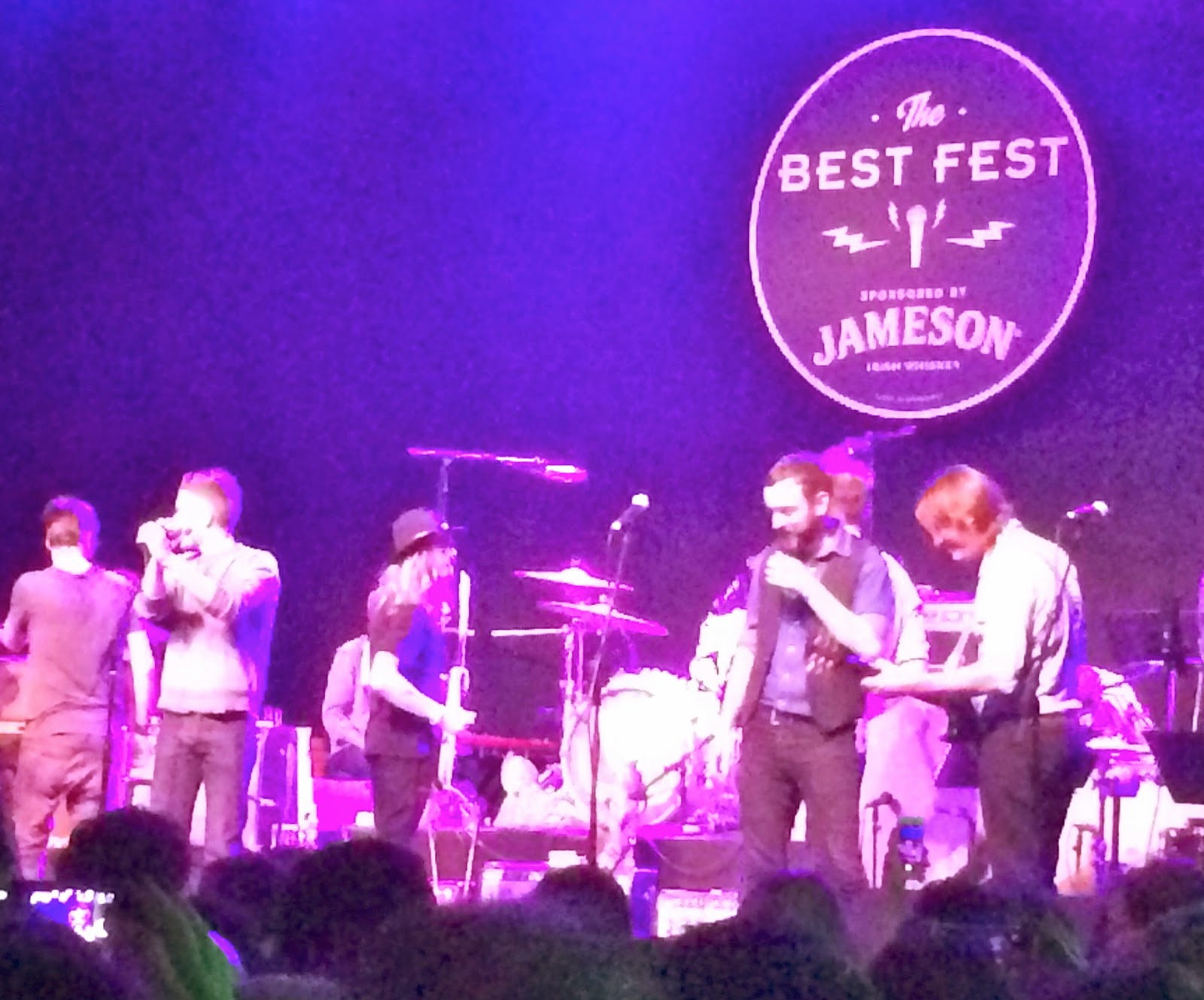 Next up was Black Rebel Motorcycle Club with "Art Of Dying" - Awesome. Then Spoon's Britt Daniel with "I Me Mine", which was great, but even better was the lovely Karen Elson and Norah Jones on "I'd Have You Anytime". And even better than THAT was Ben Harper with "Give Me Love (Give Me Peace On Earth)". I mean, come on.

Kind of weirdly following that was Weird Al Yankovic in an unusually straight turn for him, singing, "What Is Life", real lyrics and all. Then Dhani Harrison (and friends, including Aaron Emby, Jimmy Vivino, and Stephen Perkins from Jane's Addiction) really going for it with their "Let It Down". It's really good. We got down. 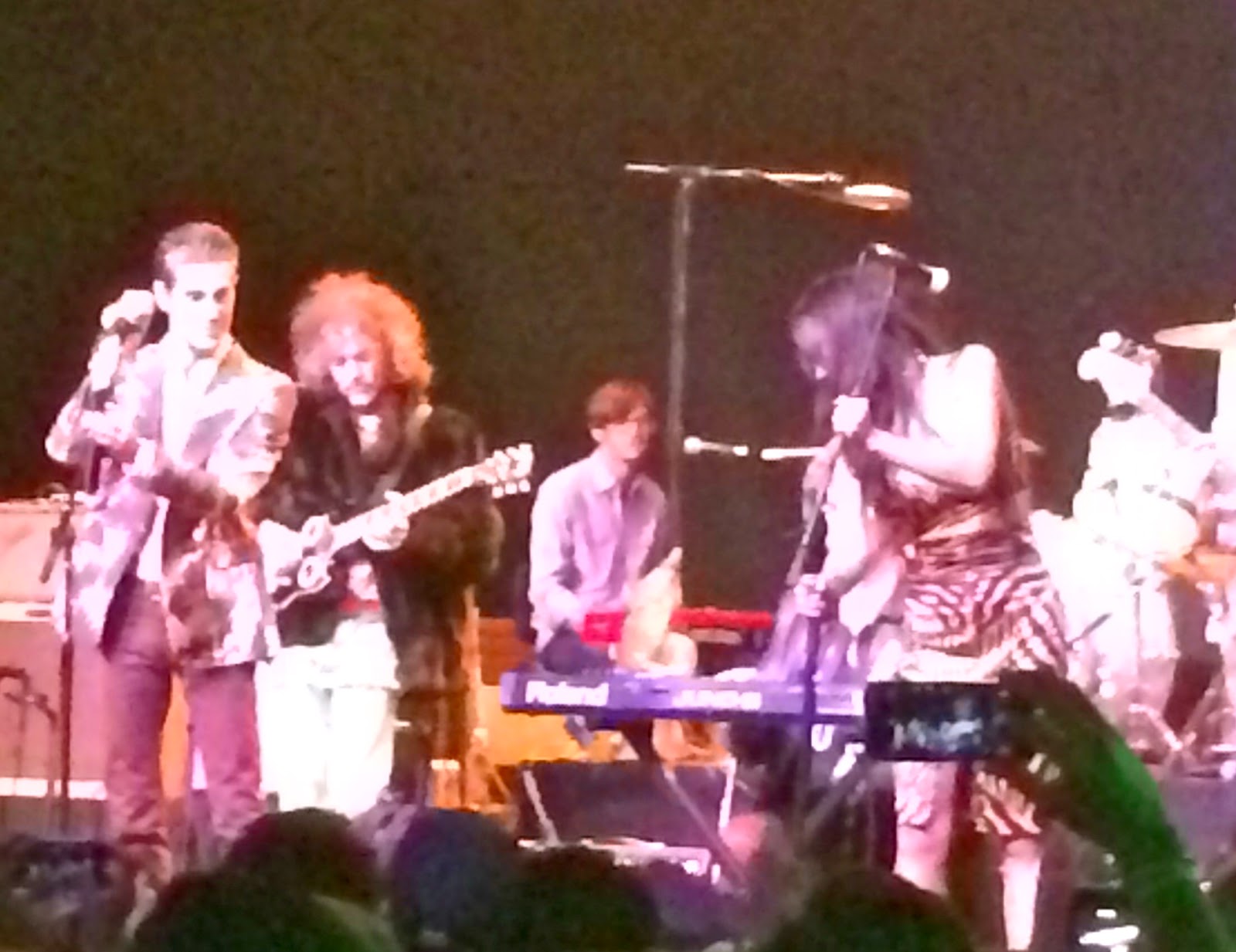 Big Black Delta played "The Ballad Of Sir Frankie Crisp" while we were in line at the bar (Jameson was the gracious sponsor), and then Dhani Harrison was back on lead with "Savoy Truffle". Wayne Coyne of The Flaming Lips came out and gave us "It's All Too Much" - which it really almost was. Because NEXT, joining Coyne and Harrison came Perry and Etty Farrell, singing the sweetest favorite, "Here Comes The Sun" to us, and to each other. Love.


The line-up was so super-diverse, and so jam-packed ... it was clear to see how intensely George Harrison (and The Beatles) have influenced and inspired, well, everyone. And they clearly all wanted to play in a show honoring him, because the cavalcade continued on and on ... Nick Valensi (with Danny Masterson and Matt Sorum) playing "Wah Wah". Norah Jones' beautiful ways with "Behind That Locked Door" and "Something" were simply lush and gorgeous. As was Heart's Ann Wilson with "Beware Of Darkness". 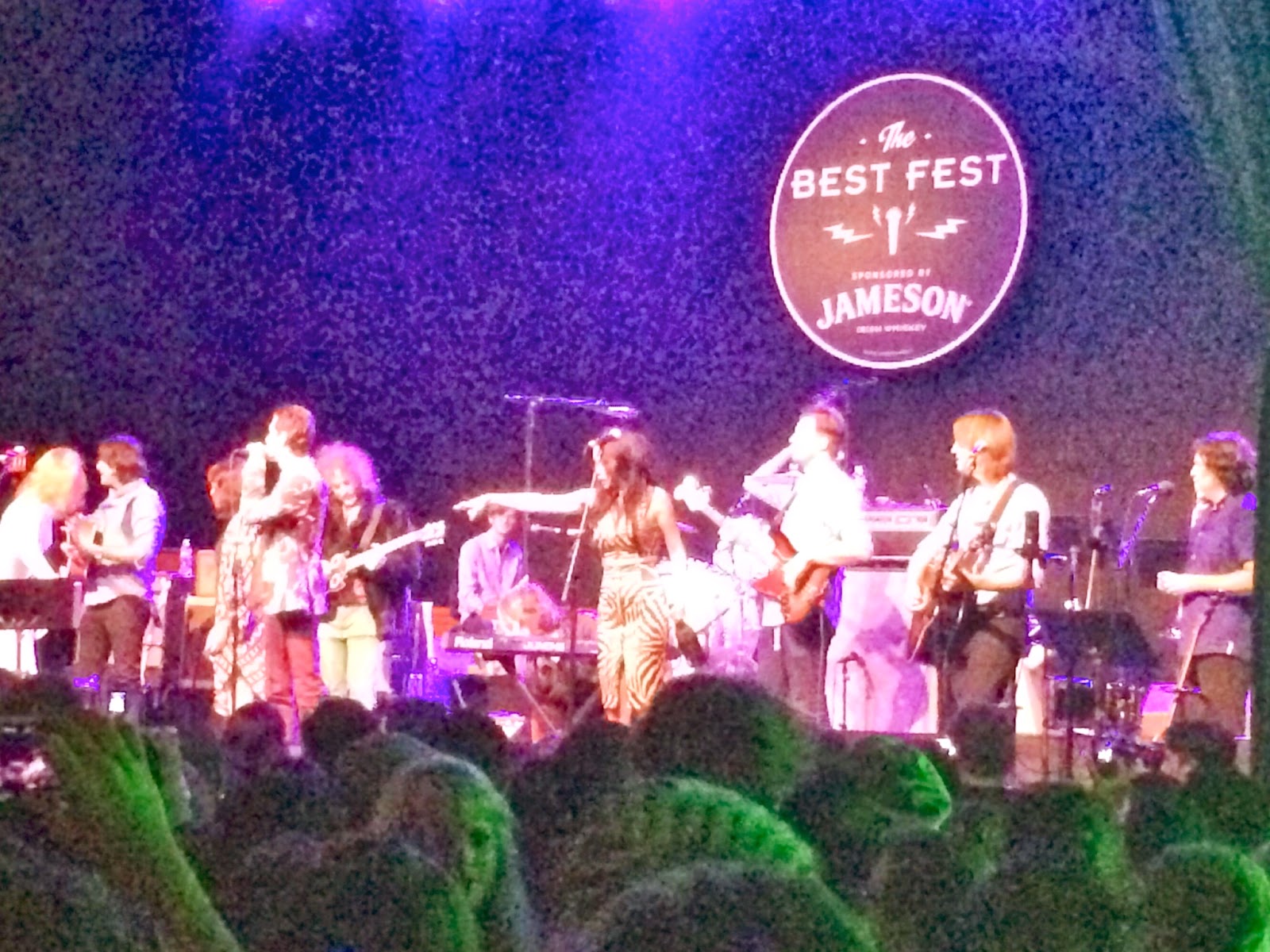 My phone died somewhere around here after a long day's work, so I gave up on photos and caring and just completely enjoyed ... The Killers' Brandon Flowers throwing down "Got My Mind Set On You" with Dhani Harrison. How good. We thought that would be a good note to sneak out (and CRASH!) on, but just as I turned around to split, out came Brian Wilson. BRIAN WILSON with "My Sweet Lord", which I'm pretty sure is what I said right then too. Wow. What an evening! What a day!

That was a REALLY good note to sneak out on, so we did, and that was our finale. The real finale, I'm told, was an All-Star jam of both "Handle With Care" and "All Things Must Pass" - both very sage - and timely, as we were about to crash hard. What an excellent night of music, and what an excellent legacy to see, more than honored ... Rocked. Let's hope this was the first of many, many George Fests ... and many thanks to all involved for a spectacular time!