It has been all about the art lately in Venice, and this last Saturday night was a big one for it. C.A.V.E. Gallery on Abbot Kinney had the opening of renowned street artist Shark Toof's Ping Pong Show AND it was the big celebration for SPARC's 35th Anniversary. A full night of greatness. 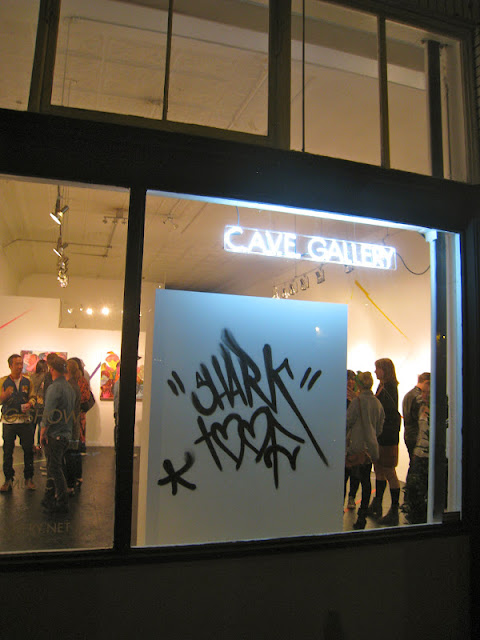 My dear friend, Shana Nys Dambrot, wrote the introduction for Shark Toof's new and completely gorgeous coffee table book, and we discussed Shark Toof's fine art works on canvas with the man himself. 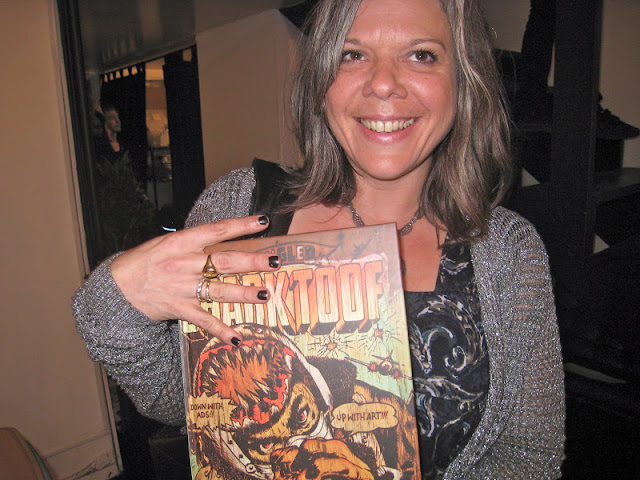 Shark (I'm gonna call him that, as I have a hard time with the f) opined on the state of sexual taboos in the world that gave his show its name. 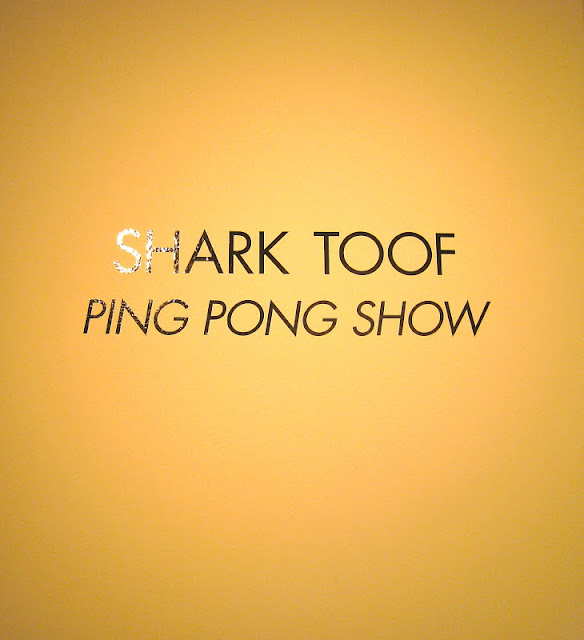 "Ping Pong" does not refer to the hooker trick of yore, but rather the sex industry mores of Asia vs. here in the U.S. 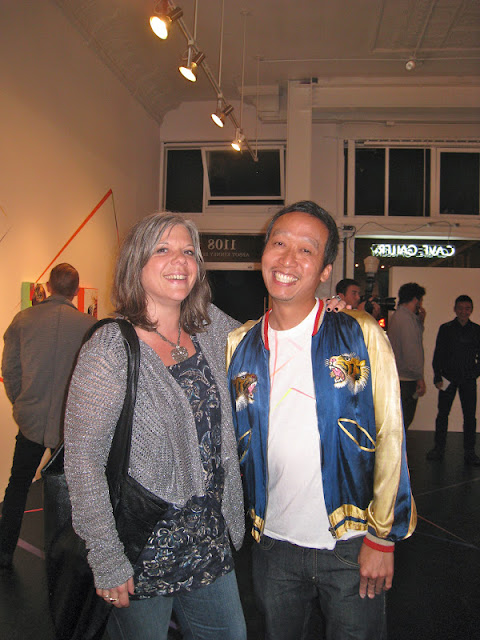 Bright fluorescent stripes on the walls caromed about and around the paintings, giving the whole gallery an installation feeling, picking up the colors exploding off the art. The gallery was packed with collectors and hipsters, locals and even a couple tiger face-painted babies that could have climbed out of one of the paintings. 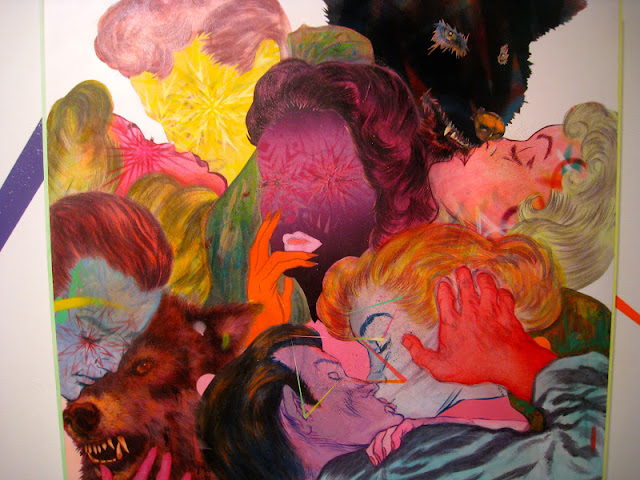 Shark is best known as a street artist, and his work has shown up on exterior walls all over the world, often featuring sharks. 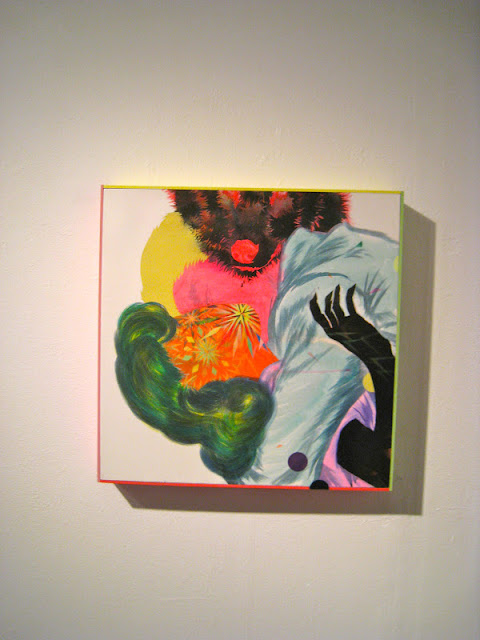 With this new, crucial book, and gallery shows like this, Shark has taken his outdoor pieces inside, and successfully bridged that gap previously crossed by folks like Shephard Fairey and Banksy. "Post Art Bills" reads the box that houses his book. Yes. 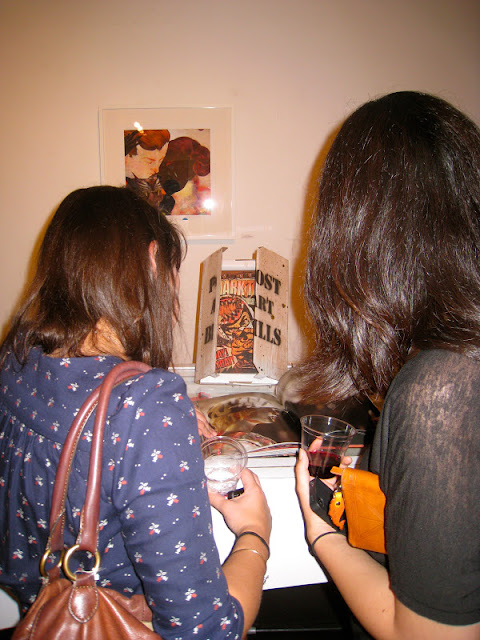 The show is bright and profound and you can check it out on Abbot Kinney now through November 11th. 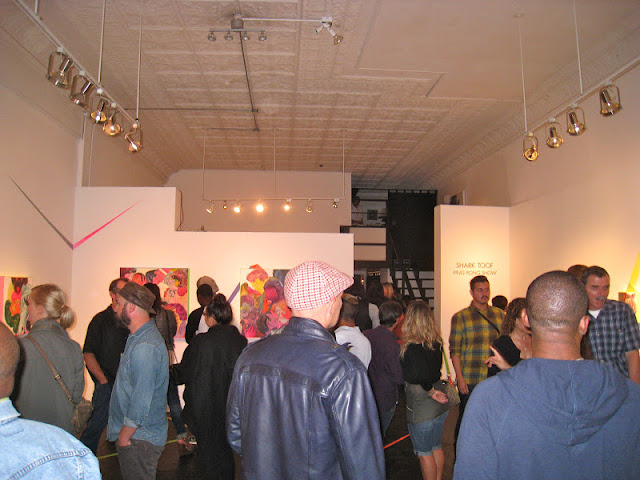 I raced from C.A.V.E. over to the SPARC (Social and Public Art Resource Center) affair at its headquarters in the old jail on Venice Boulevard. The entire building was lit up, with murals hanging from every inch of it. 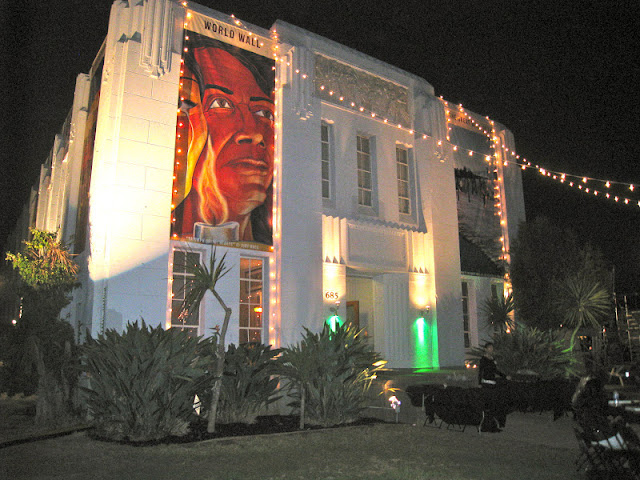 The back parking lot had been transformed into a Big Fish style outdoor party, with lights strung up everywhere and music blasting from the stage, courtesy of Venice's own Tom Schnabel spinning his KCRW brand of world beats, and later jazz and blues legend Barbara Morrison and her band getting everybody up and dancing. 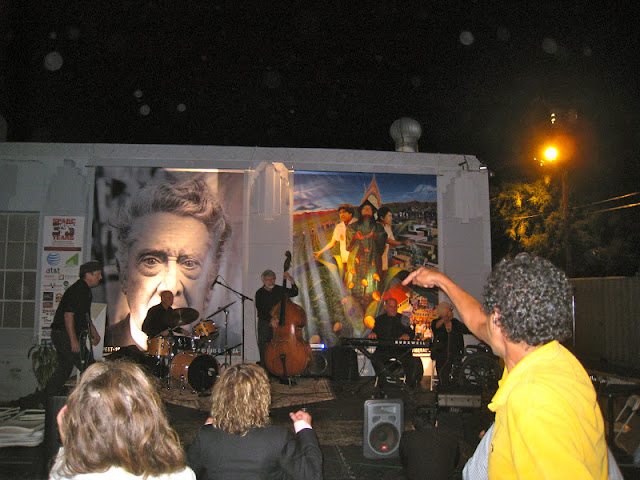 SPARC was founded by Judy Baca, Christina Schlesinger and Donna Deitch in 1976 with their first project, The Great Wall of Los Angeles. It is the longest mural in the world, taking the viewer through important moments in our history all along the L.A. River bank. They offered tours of the massive mural (all done by volunteers and at-risk youth), led by Baca. I couldn't attend the mural tour, but encourage everyone to get down there and see this true wonder of the world as soon as you get the chance. It is truly massive, and makes abundantly clear the importance of art as a tool for social expression and teaching history. 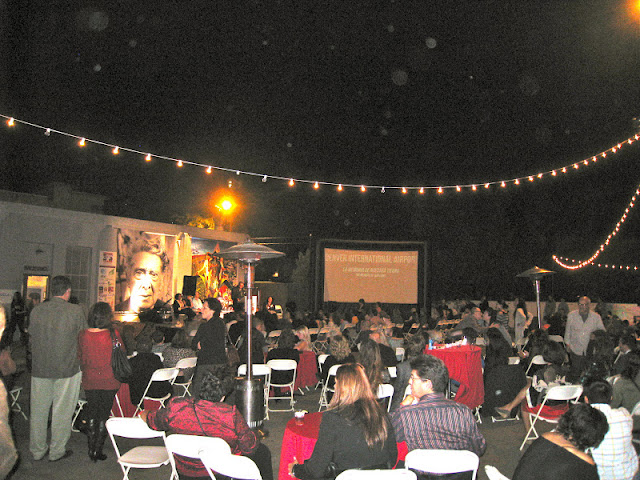 Awards were given, speeches were made, and there was an air of jubilation over the entire affair. It was a delight to see so many neighbors all out and having a good time under the stars, dancing, drinking (theme drinks like "The Mural"), and eating delicious fare from the booths set up by Hal's, Casa Linda, and Ben's BBQ. 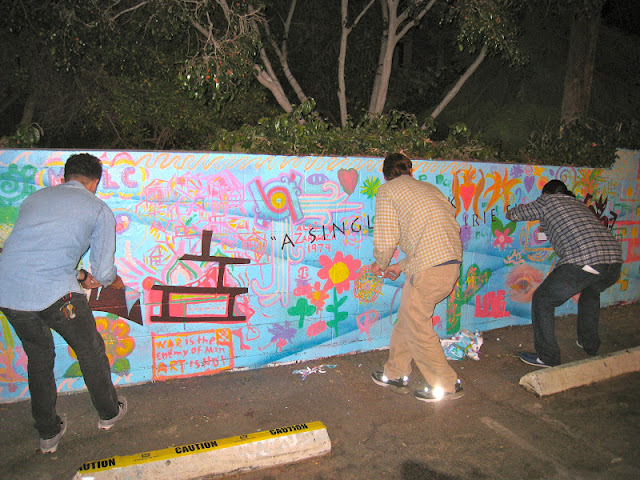 You could participate in live mural painting on one of the back walls, and it gave you a sense of the camaraderie and effort that goes into creating the more massive pieces that adorn our fair city. 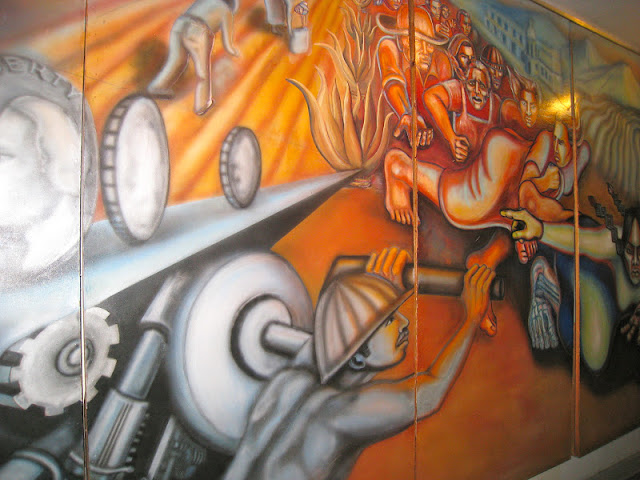 Every surface was adorned with a mural illuminating important cultural characters and events. Even in the bathroom. In a time when street artists (folks like Shark Toof) get busted and jailed for beautifying spaces, and murals are under attack by small-minded building owners and corporate advertising, this was an especially satisfying evening in homage to the importance of art's role in social justice. 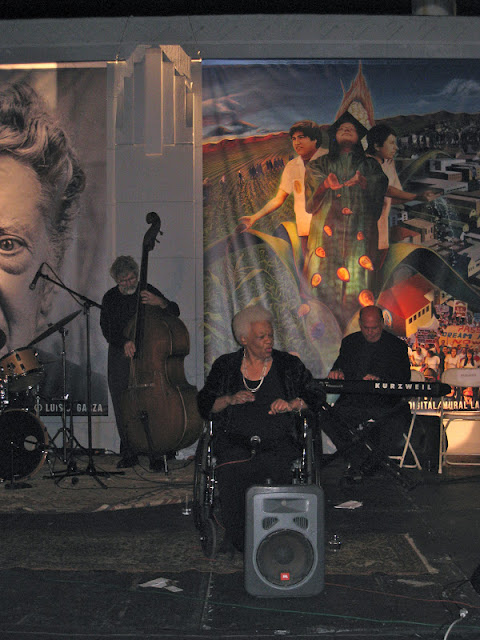 Once all the donation pitches and speechifying was complete, it was time to simply party. Barbara Morrison and her excellent backing band tore it up, and people kept dancing even as the event was being cleaned up around them. A great cause, a great night of wonderful art, and another exclamation point on the SPECIAL! place that we call home. 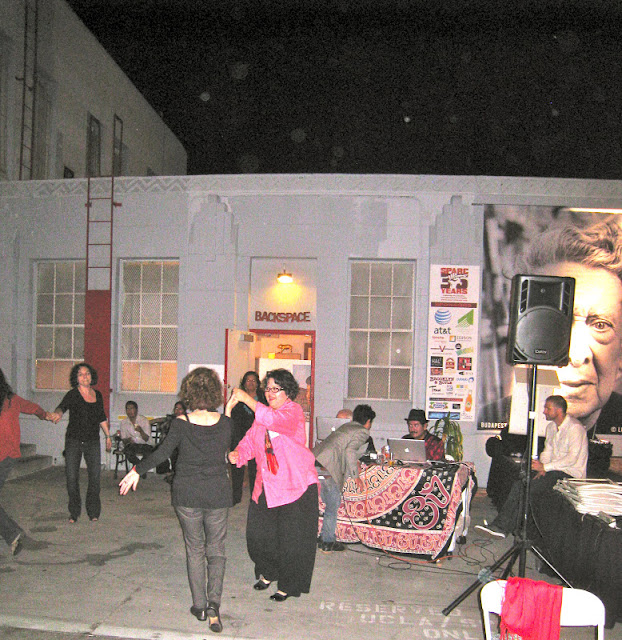 As SPARC's saying goes, "BE the Spark - to bring the past into the present to inspire the future." 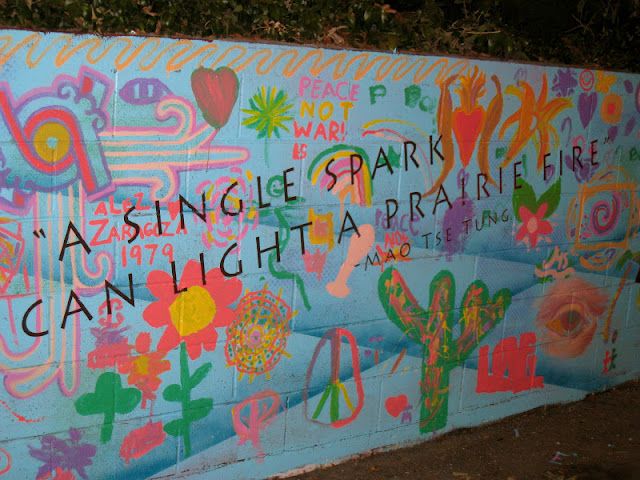