Eclispse Quartet/Jenny Holzer Mash Up at L and M Arts

L and M Arts continued hosting their finissage events with an evening of string quartet music by the Eclipse Quartet in the West Gallery, alongside Jenny Holzer's LED screens scrolling her messages in time to the music, to wrap up the exhibition of her The Future Please show. 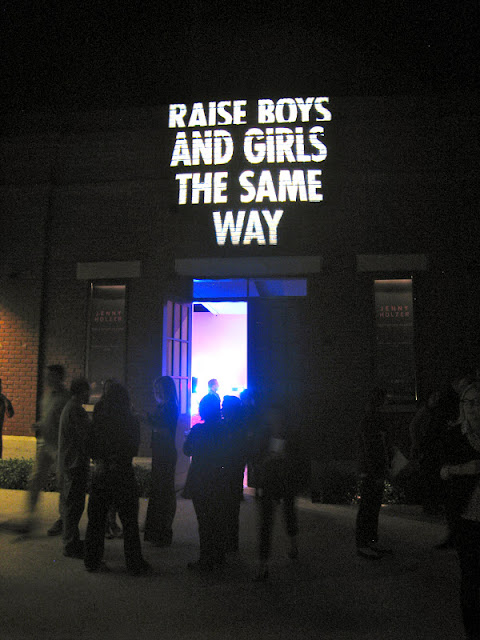 The Eclipse Quartet performed Different Trains, written by Steve Reich for the Kronos Quartet in 1988. It's a powerful piece of music, as it documents Reich's train travels across the United States as a kid at the same time the trains were transporting human beings toward the camps in Europe during the Holocaust. Not light or easy listening by any means, and its 27 minute length is just about exactly right.

Recorded words accompanied the music, as the LED screen messages blazed across our eyes, so brightly that you sometimes had to close your lids and just listen. It's a lot to take in. 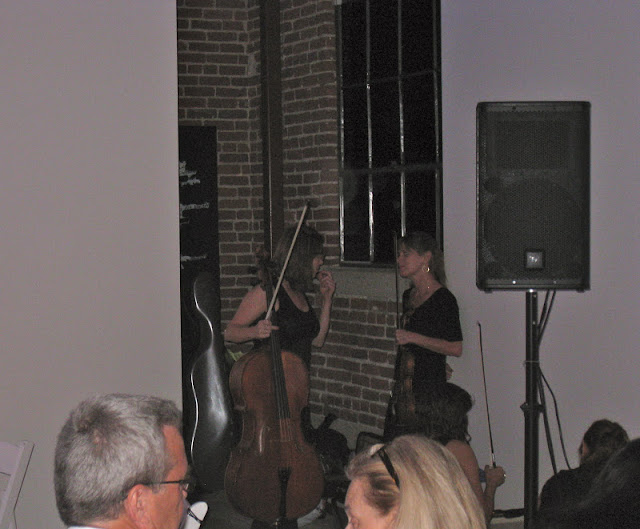 The first movement was "America Before The War", very upbeat, hopeful, maybe even a little proud and boastful, with phrases like "the crack train from New York" (with special * in the program that "crack" USED to mean "Best" back in the day - ha) and "one of the fastest trains" being repeated.

The second movement was "Europe During The War" and had a much scarier, doom feeling, with a more frenetic pace and a lot more ominous screeching. The words on the front set up of screens all had to do with Baghdad and redacted data and more modern war-related problems. Thus, the repetition of the music and the recorded words and the information on the screens surrounded you with the truth that ALL war is senseless and we're just repeating ourselves in different times in different parts of the world. All the time. At least that's what I took from it. 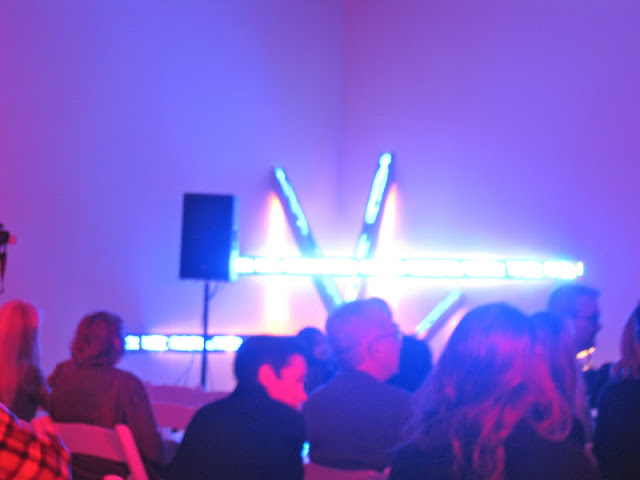 (I was there with my friend Jessy, who is a professional violinist. She thought that the piece was powerful in that "The out of tune, weird pace was annoying, but it was inspiring at the same time. And I appreciate that it was short." Ha!)

This time the words being repeated were "They were loaded with people" and "They tattooed a number on our arm" and "Flames going up to the sky - it was smoking", with air raid signals going off. Uggghh. You felt helpless and thwarted watching and listening, like "Will we EVER learn?!" 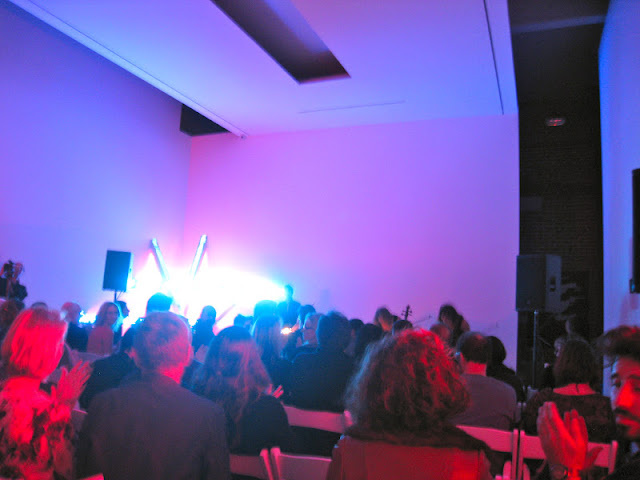 Then the third movement, "After The War" came along and it was hopeful again, and somewhat relieved. The music became more melodic than chaotic, more upbeat and happy, with the excitement you get upon arrival somewhere and the train whistles that go along with that. Though the music was more light-hearted and lovely, it was also wistful, with phrases like "but today, they're all gone" and "There was one girl, who had a beautiful voice" and "And when she stopped singing they said, 'More, more' and they applauded."

And so did we when the music then ended abruptly.

We applauded and stood to leave, and right as I was about to walk out the door, I saw a phrase go by on the sign that said, "Your consolation is that this might be the truth."

I'm not so sure I feel consoled, but I always prefer the truth. 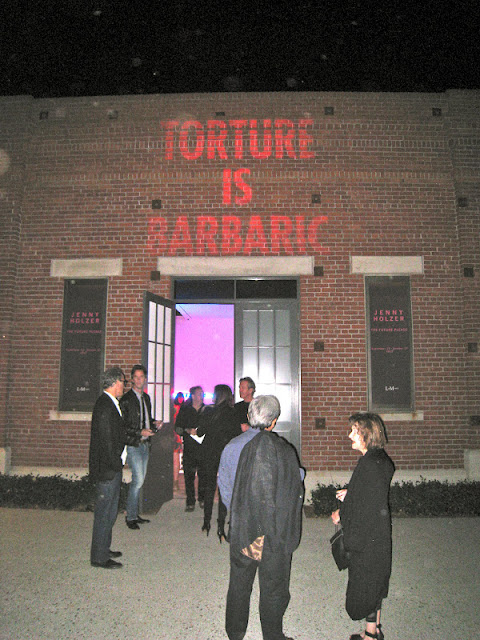 Thanks and CHEERS to L and M for continuing to provide us with insightful, educational, and inspirational moments. What a treasure we have right in the middle of our neighborhood.