Jane's Addiction End Theater Of The Escapists Tour At Home in L.A.!

The last show of Jane's Addiction's epic Theater Of The Escapists Tour 2012 took place, appropriately, at home in Los Angeles, at the classic Wiltern Theater. 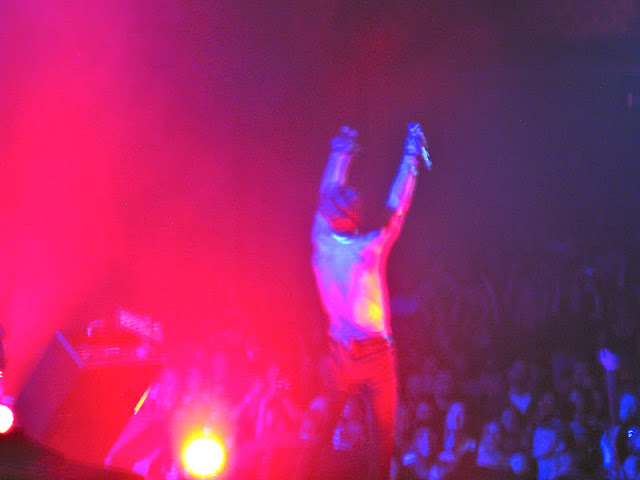 As it was the Saturday before Halloween, there was a steady stream of ladies as sexy whatevers, ghouls, zombies, and even furry cows filing into the old building, milling around in the lobby, getting drinks. Ruling.

Also in the lobby were escapists entertaining the crowd with the "Immersive Theater" that has come to be a trademark of this tour. 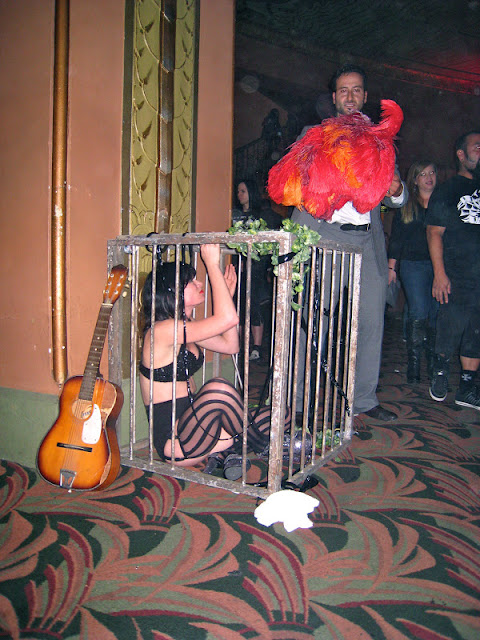 There were girls chained to railings, old-timey looking guys getting into play-fights (so realistic that the Wiltern staff told them they had to tone down the violence a bit), and a girl contorting herself inside a cage. 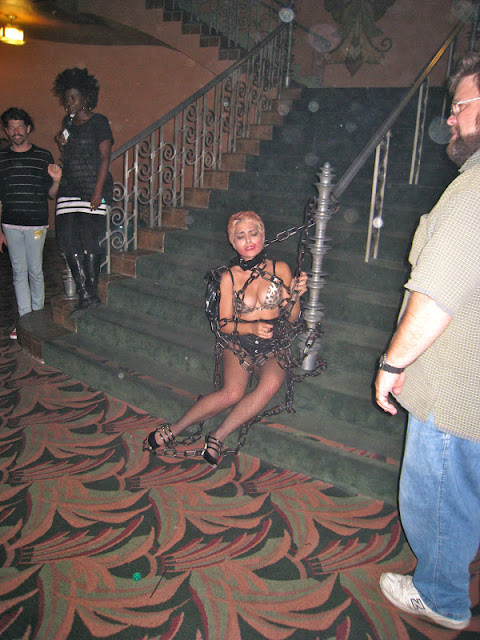 As many people were in costume at the event, there was that fine line blur of what was for the show, and what was real. Perfect tone to set. 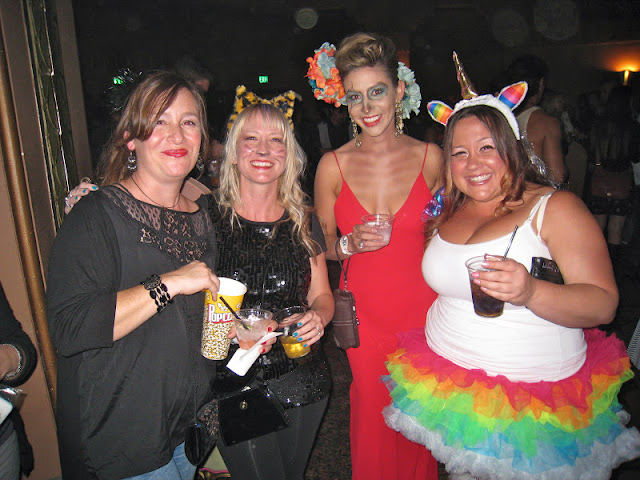 thenewno2 opened the night for Jane's, and the experimental indie group fronted by Dhani Harrison were waaaay more rocking than how I remembered them at Lollapalooza. Even Harrison's band mate (in Fistful Of Mercy), Ben Harper, was seen practically David Lee Roth jumping off the sound board, so into his friend's jams was he. 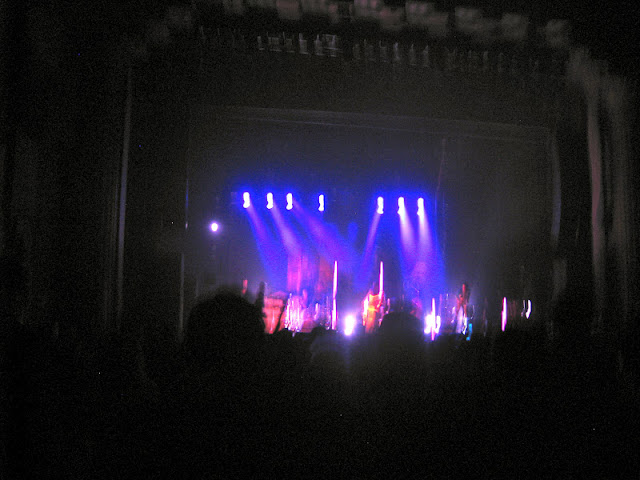 It was great stuff to get in a rock trance to, but I had a lot of catching up to do backstage with friends I rolled with earlier this summer when I was lucky enough to be along for the Theater Of The Escapists East Coast ride. 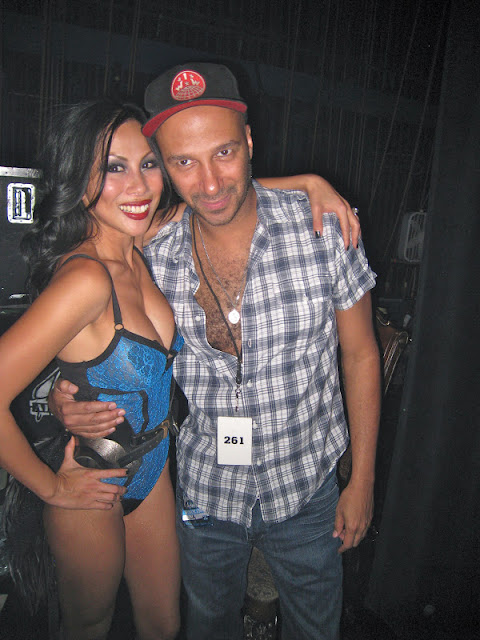 Getting backstage just in time for the "Boiler Room" jams was a great choice. We squeezed into a little tiny room to get to hear Perry, Dave, Stephen and Chris fully rock out "Standing In The Shower Thinking" to just a handful of friends. I was squished in next to Tom Morello, and we agreed that this was exactly like listening to your friends jam in the basement back in the day. Only this was the monstrous, huge Jane's Addiction we were being sweat-splashed by this time. Life is so fun. 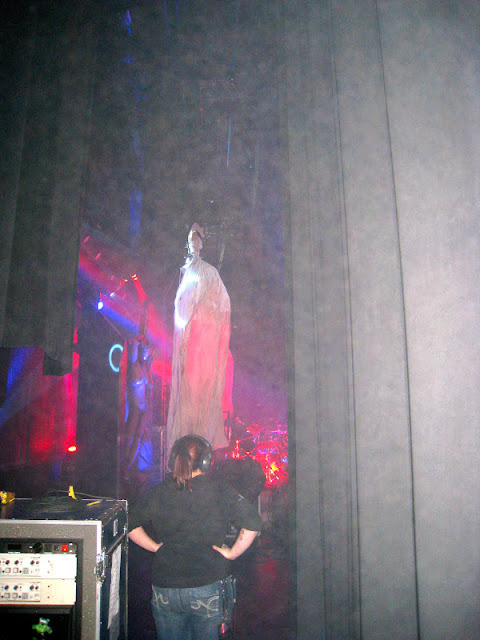 Show time! The Pink Floyd intro music that will now forever be related to this tour for me began, and the sold out Wiltern crowd began to collectively lose their mind as the house went dark. Then BAM! "Underground" began the show and Los Angeles finally got to see Etty Farrell and Stephanie Spanski swinging in their giant white dresses off of their trapezes, as the band whipped the place into a frenzy that would last throughout the set-list. "Mountain Song" is always a highlight, and tonight was no different. 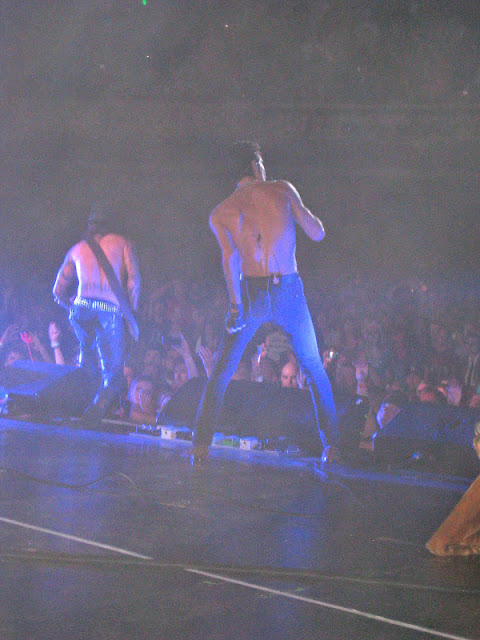 L.A. LOVES their "Mountain Song". It was HUGE and blew right into "Just Because" (my friend Steph's favorite jam), then "Ain't No Right" and "Been Caught Stealing" back to back. All the Jane's songs are so intricate and huge, you can look around at the crowd and see them not even knowing where to look during the songs, because there's so much excellence going on. 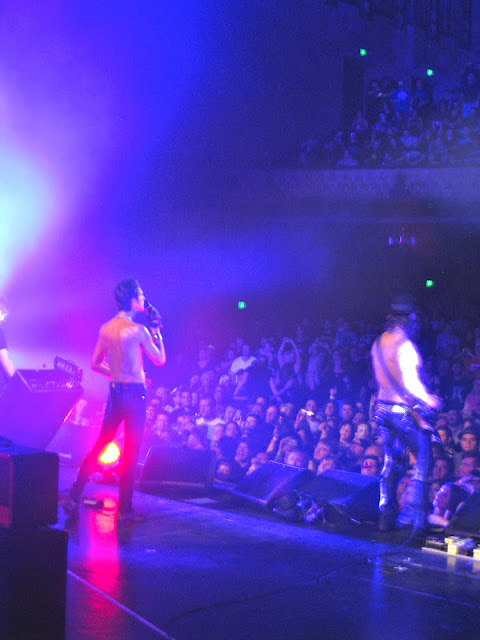 From Dave Navarro's scorching guitar solos to Stephen Perkins' wailing on those drums, to Chris Chaney's bass resonance to Perry Farrell's inimitable voice and front man theatrics, never mind the hottest lady dancers ever, Bubba Carr's performance art, and video screen visuals swirling above it all, and you're sweating yourself just to take it all in. 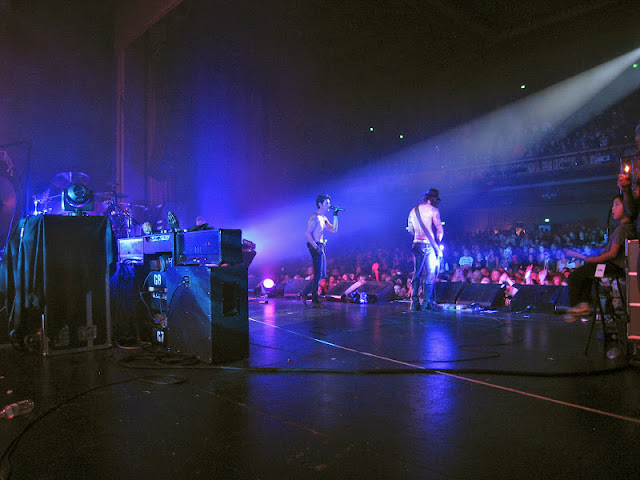 "Irresistible Force" (off the newest JA album, The Great Escape Artist) made it abundantly clear that the new stuff is as BIG as the old tracks, and blends in to the set list so well that they're just all classics. This hometown crowd would probably have been stoked if they'd just played the Empire Carpet jingle, but they didn't have to settle for that, as next up was everyone's jam, "Jane Says". The guys were all up front of the stage and acoustic for this all-time classic, but I can't say the same for myself, as "All Access" at the Wiltern does not mean that, and the security guys wouldn't let me go down into the pit mix with the superfan people. That is dumb. 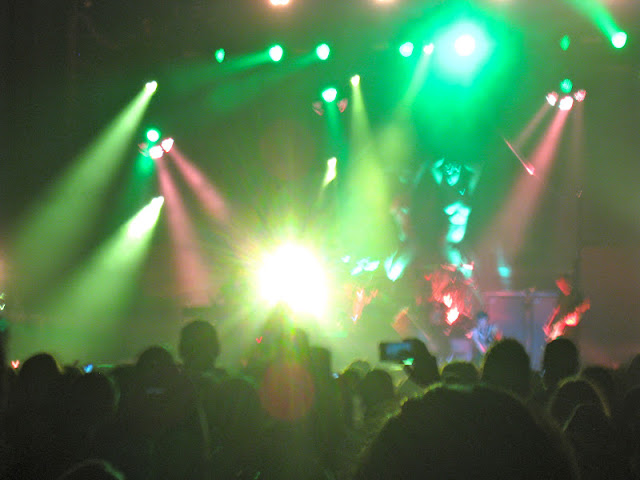 So back to the side of the stage for me, which no one can ever be mad at. I just like to be in the middle of it all at rock shows I love, you know?

Halloween's vibe was evident, and Perry at one point said, "If Mitt Romney wins the election (God forbid, even typing that is scary), it's gonna be SPOOKY in this country." Uh, yeah. No dwelling on that b.s. on this night though, not when Jane's Addiction is blowing up "Chip Away" and "Up The Beach" and "Whores"!!! The ENTIRE crowd was losing their shit, from the lucky ones in the pit to the very last row of the balcony, on their collective feet, SCREAMING. 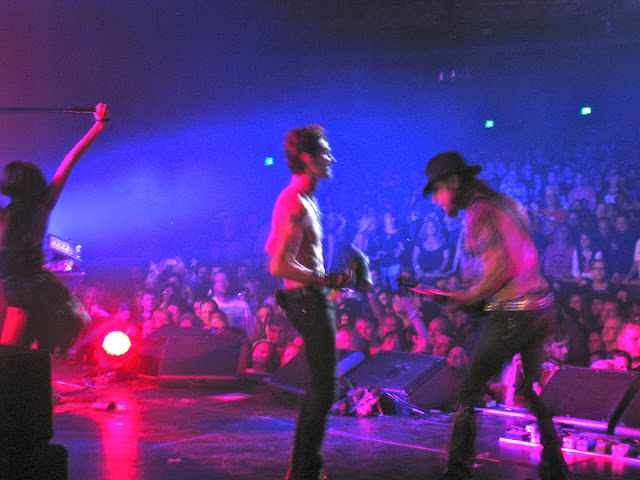 "That is some original Los Angeles shit right there!" yelled Perry, who then told a tale about singing that one on Hollywood Boulevard ("when Dave Navarro was underage") and old hookers with their big tits would come by and listen. Ahhh, L.A. in the dirty old days .... 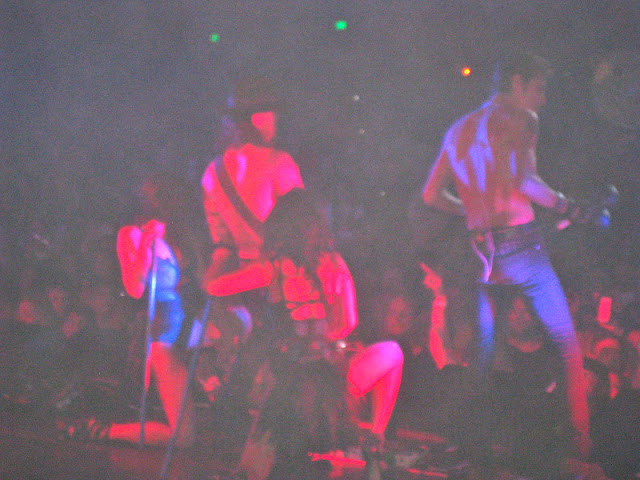 Led to "Three Days." EPIC. This extravaganza featured every player at the very top of their game. Navarro's solo was just ... ridiculous: 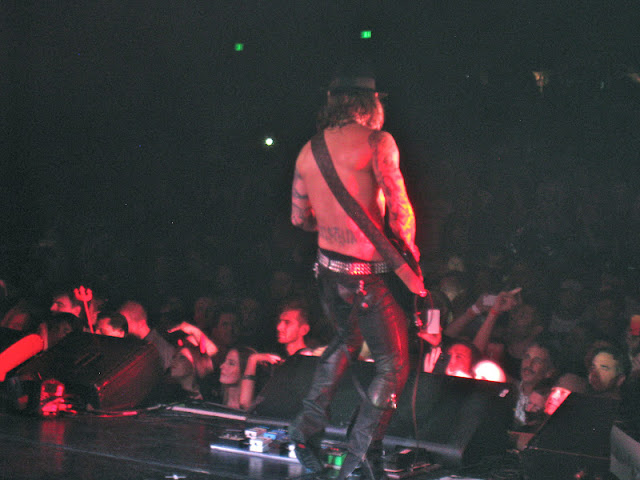 ... and Perkins' solo threatened to implode the old Wiltern. 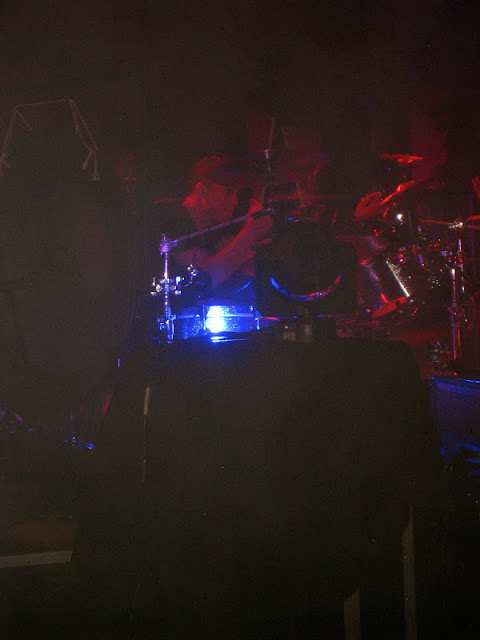 Perry was throwing down some Jim Morrison style shaman dancing, crawling around on his stomach, twirling and toasting the crowd - the entire time. 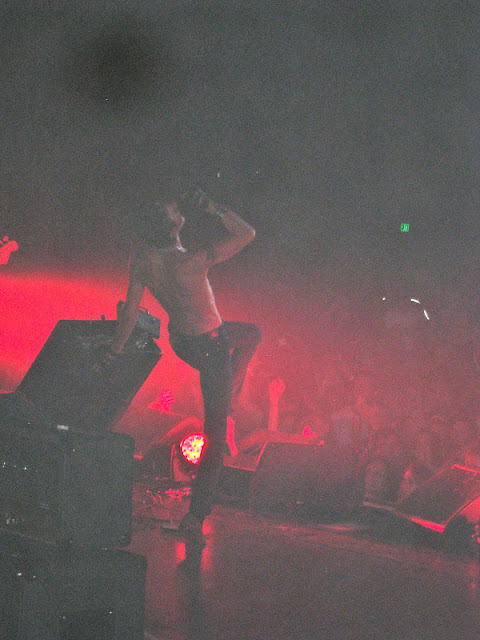 The dancers were gagged and teasing Dave and Perry with their canes as they acted out the world's sexiest three way ... for three days (or 10 minutes or so, but you felt transported away for days). LOVE it. 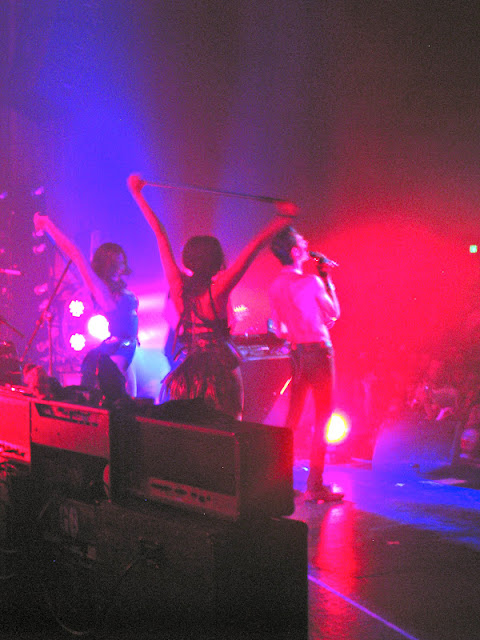 I seriously think of "Splash A Little Water On It" every time I'm in the shower since I got back from this tour. 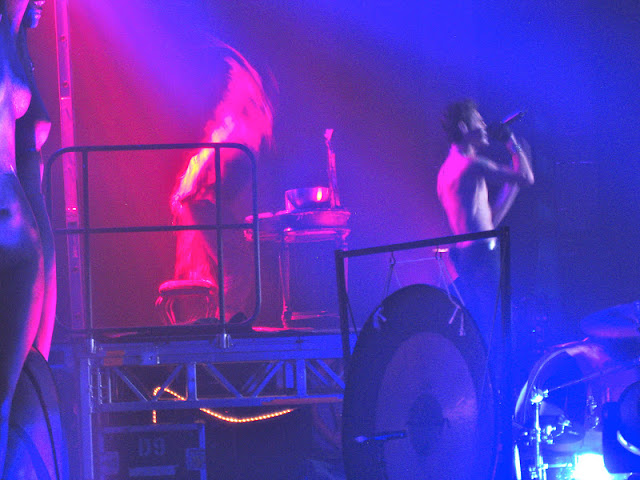 That one was next, and as Bubba flung mud everywhere, we all watched from the side of the stage, arms raised, reflecting the ones up and facing us from the audience. 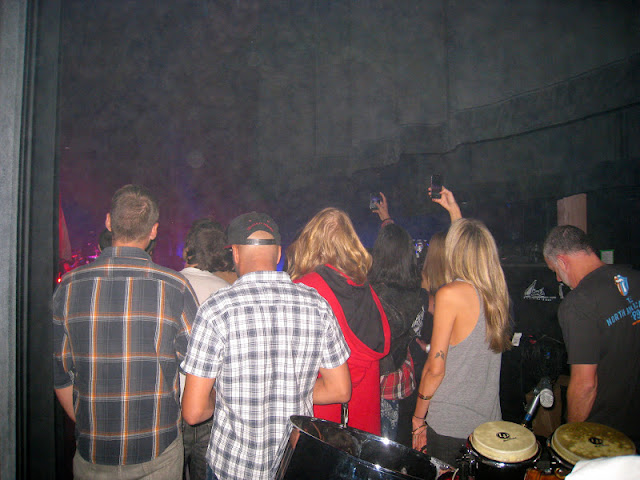 The people were absolutely loving every second of it, as were we. 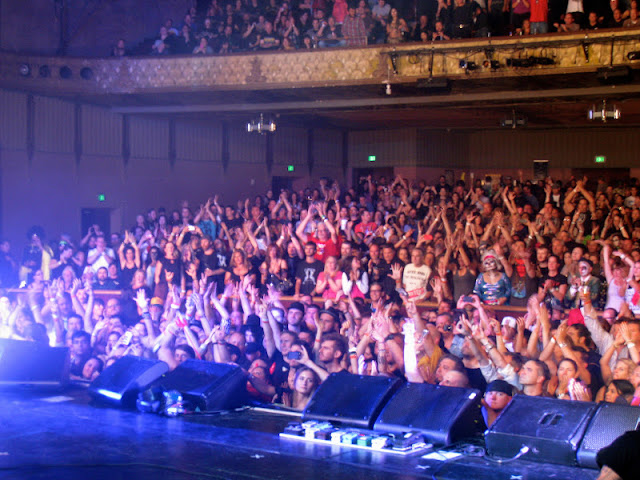 A dreamy instrumental opening led to the massive scope of "Ocean Size". Wow. WOW! I love this one every time it's ever played on any speaker, but to hear it live is just a perfect example of how ROCK is supposed to feel. 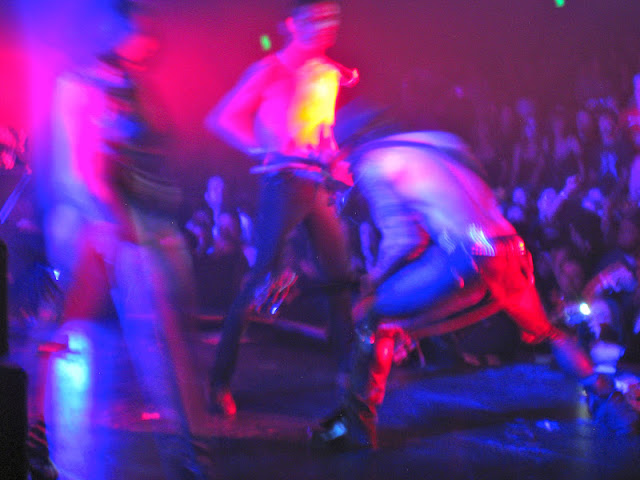 And how BIG this band has always been and will always be. I can't think of any band today whose songs are ALL this well-crafted and tightly played, never mind one who feels so fresh even 20+ years into their existence. SO much respect. 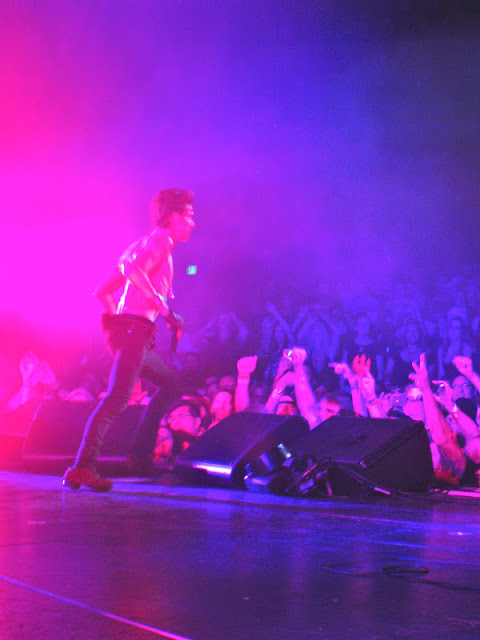 We all had a bunch more songs we hoped for, but the last one (of the relatively short set list) was ... HERE WE GO!!! - "Stop!" I wrote "Crowd = ECSTATIC" in my book here. And they were. This was Jane's Addiction tearing up Los Angeles! The crowd all sang along, and this extra fast paced one was over in no time, and then so was the show. 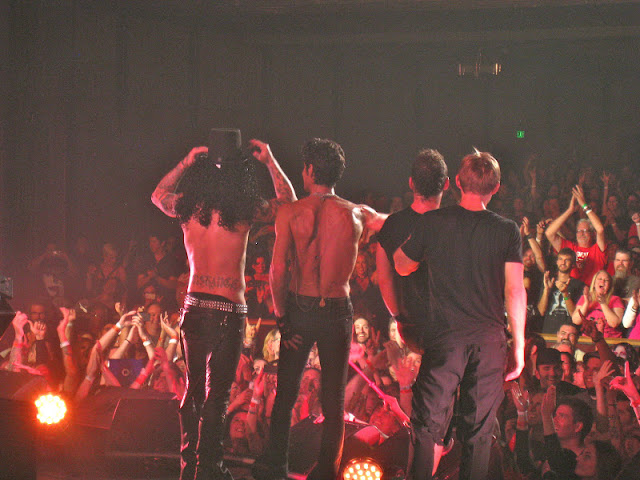 The band and the dancers took their bows, Dave Navarro put on a Slash costume, and performers and fans beamed mutually at each other as the crowd kept screaming for more. 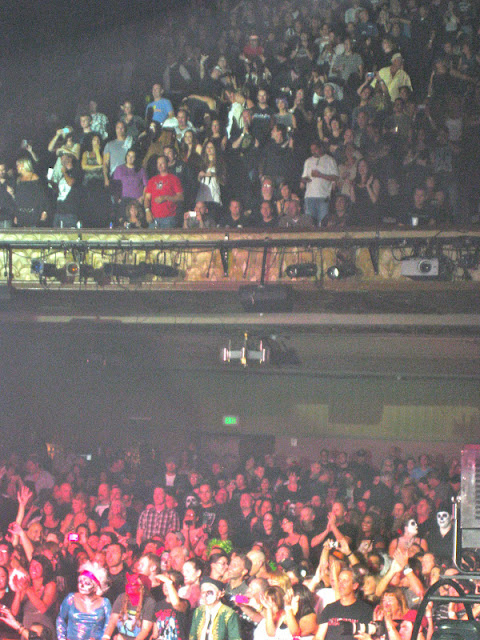 But that was it, and as the band waved and left the stage, you could hear the people's thunder all the way back downstairs. Jane's Addiction definitely left them wanting more, just like all the very best things in life do. 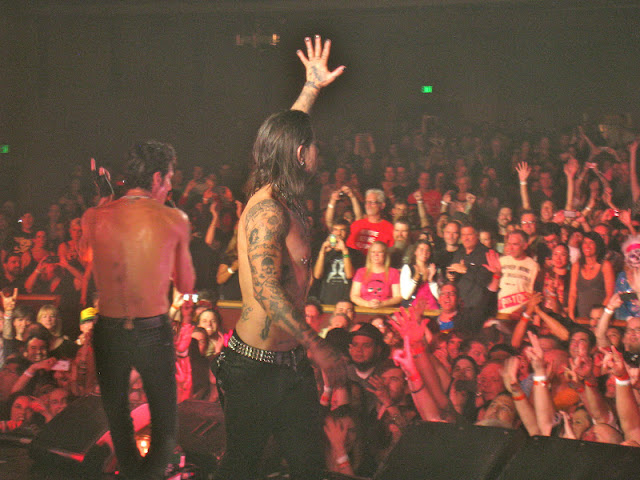 THANK YOU to Jane's Addiction for all the great rock they threw down in 2012 ... I can't wait to see and hear what's next! Classic, guaranteed.
Posted by CJ Gronner at 5:53 PM