The Circus Comes To Abbot Kinney!

The Circus came to town last Saturday at the opening of the Zircon & Wish Aerial Circus happening in the one ring space of Robin's Sculpture Garden right there on Abbot Kinney Boulevard! I couldn't wait to attend opening night, as I'd been hearing about the work going into it for quite a while. It was about time some REAL crazy stuff happened on the street vs. the usual hullabaloo about parking or food trucks or restaurant seating or strollers or whatnot crazy- MAKING. THIS was something I could get behind as what I always wanted Venice to be in my mind when I first heard about the place as a kid. 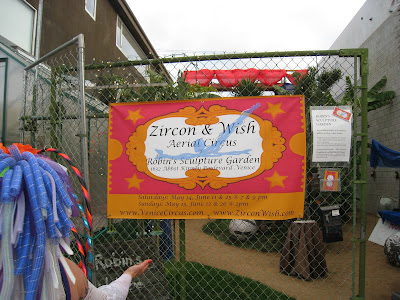 Kids of all ages enjoyed the premiere of our own Venice Circus, and many in the audience came prepared in costumes of their own, in the true spirit of the idea. 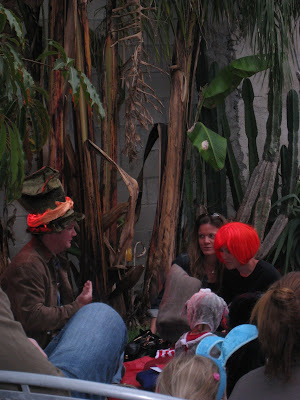 The theme of this circus is Alice In Wonderland, so the set was done up with that story's props; a clock, mushrooms, big perfume bottle, etc. A mime-type guy named Chico was going around painting the white roses red before the show as people got seated (after visiting the concession stand, of course). 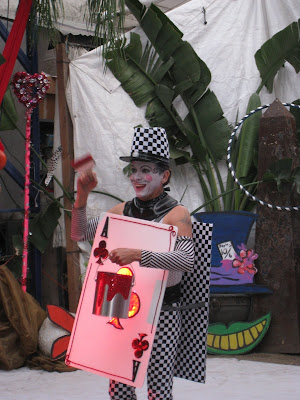 He was soon joined by fun, sociable kids from the crowd, getting into it with hula hoops from Hoopnotica. One young boy from the neighborhood even showed off his rookie break-dance moves. {I love when kids just go for it, without any fear or self-consciousness like that. It gives me hope that there will still be cool people in the future. Phew.} 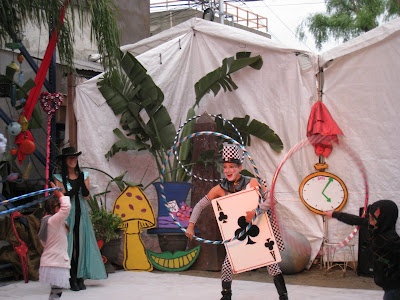 Robin Murez of Robin's Sculpture Garden, the woman and the space hosting the event, introduced the night as the first ever performance of the Zircon & Wish Circus in her space (which will continue on weekends through the Summer!), which is a perfect magic spot, such as it is scattered about with her giant heart sculptures and over-sized blown glass blades of grass. It really does feel like down the rabbit hole a little bit, on just a regular day. Just as I was thinking about that, a White Rabbit came out, muttering about "I'm late!" 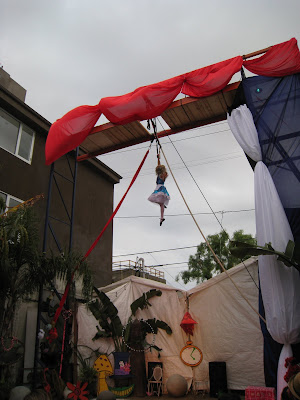 While she ranted on about it in that drama club silly voice way that kids find hilarious, an Alice slowly descended from the ceiling of the aerial structure that has been rigged high above the ground. With the May sky gradually growing grayer (and chillier) over Venice, it was pretty dope and dramatic looking as "She" (Alice was a guy to begin with) swirled around the rope, making it look extra graceful and easy. 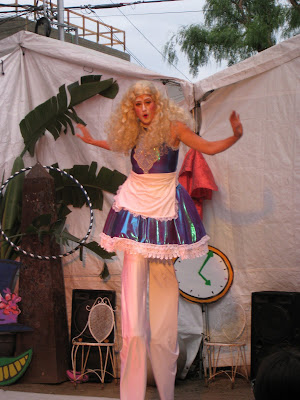 Alice drank from the "Drink Me" bottle and soon shrank into a little doll, getting some laughs. The doll drank again (with help) and came back as a giant female Alice on stilts. She jumped rope and hula-hooped and danced and made the little kids laugh, until the Mad Hatter interrupted it all to dazzle with more aerial tricks. 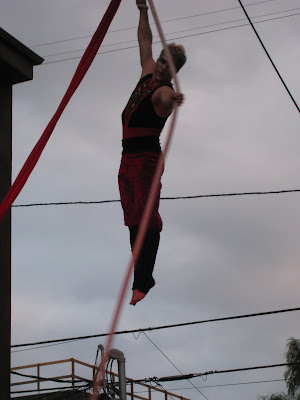 With no net, by the way. That takes some serious brute strength, both mental and physical, as it was pretty high up there. 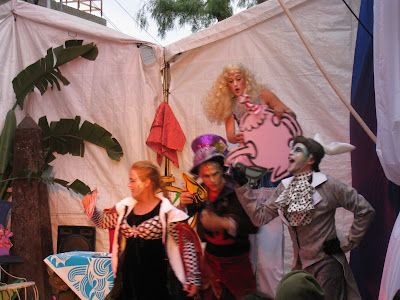 A Lady Elaine sounding (Mr. Rogers, remember?!), hookah-smoking Caterpillar came out and queened it up, spouting smoke and great lines for Venice, like "We're all mad here!" (which I like to think we tend/hope to be, in the Kerouac-ian sense, like: “The only people for me are the mad ones, the ones who are mad to live, mad to talk, mad to be saved, desirous of everything at the same time, the ones who never yawn or say a commonplace thing, but burn, burn, burn, like fabulous yellow roman candles exploding like spiders across the stars and in the middle you see the blue centerlight pop and everybody goes "Awww!”) ... 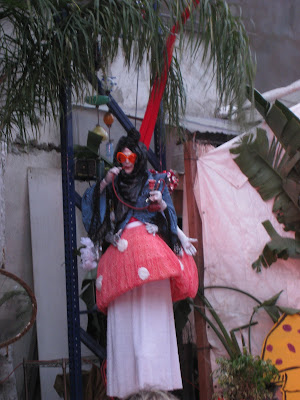 ... and "I hope you have your head fastened on tight!" as she offered up a lick of mushroom to Alice. 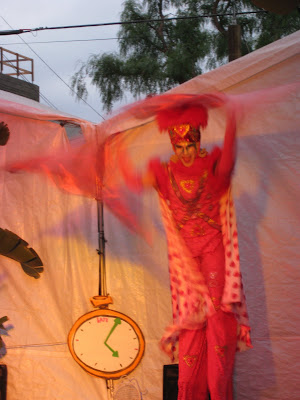 The Cheshire Cat came out and spun from a hula hoop attached to the rope, with such feline grace and natural strength that a little girl yelled out, "Nice job, Kitty Cat!", making us all laugh - with her. The Queen of Hearts erupted out of a veil of smoke machine haze and shouted, "I love croquet!" We do too, Queen of Hearts!

Tweedle Dee and Tweedle Dum (Zircon and Wish again, as they play many parts) came out and did power moves on the red silks hanging from the aerial apparatus, and everyone's necks were craned upward as they balanced and lifted each other with such fluid ease that it seemed like anyone could just hop up there and cruise around on it. Until I heard a guy in front of me say he could never even climb the rope all the way up back in gym class. 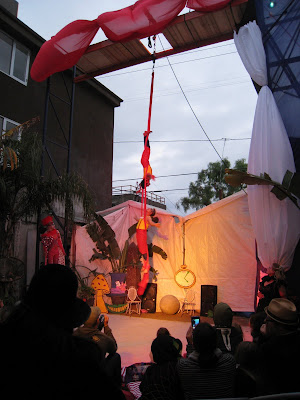 Circuses always bring up memories ... o 0 O (thought bubble) I remember skipping the box seats my Mom won to the Circus back home because it was the same night Michael Jackson was performing on the American Music Awards, the time he first did the Moonwalk. I still think I made the right choice - that thing was exciting!

[Amid all of this, I could hear people going by on the sidewalk, heels clacking on their way to Wabi-Sabi or The Tasting Kitchen across the street, wondering what the heck was going on in this space right on the boulevard, with dudes hanging from giant red drapes, spinning overhead a bit like a cross between Cirque du Soleil, Pee Wee's Playhouse, and a scene from Bruno. It gave me immense pleasure to hear that renewed wonder in the voices as they came across something splendid by complete surprise.] 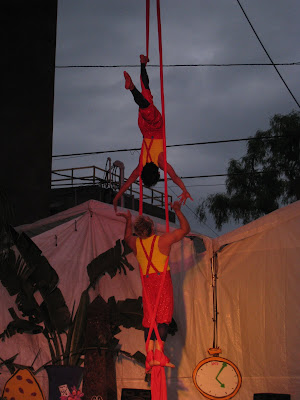 The Tweedles entertained the crowd with their magnificent feats, and then it was over, to introductions and applause. You could tell the crowd was delighted, that for most of us, we all just walked on over to the Circus that night! And would now walk on to the next venue, party or home, having been reminded that life itself is a crazy Circus. Venice was founded on the ideas of a Circus Ringmaster kinda guy, and that is the spirit that has hovered over it all - and persists - exactly because people like this have their dreams, and make them come true. 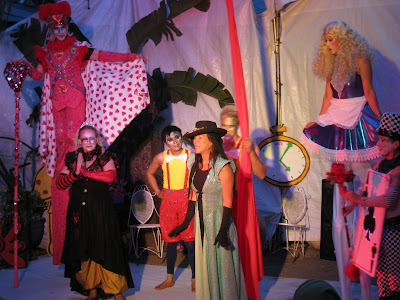 *Tickets are steep-ish ($25) for a somewhat short show, but there are discounts for those saying "White Party" at the gate. They're also pretty cool about working with the locals to make it affordable to bring a slew of kids out for a night of fun and fantasy, right up the street.
Posted by CJ Gronner at 8:52 PM