Few people inspire me in such a profound way as my good friend, The Nightwatchman - the alter ego of guitar hero, Tom Morello. That's not because he's a big rock star or even that he does rip that guitar apart every time he picks one up, but because he speaks his mind exactly, never minding if it rankles the G.P. (general population) or has fans that want him to shut up about social justice and just shred. In a time when so much music and its attendant celebrity is up its own ass, pointless, platform-wasting, and so empty it echoes ... He's here to make a difference.

I've stood beside him many times in complete solidarity, and can tell you from experience that the guy is beyond 100% authentic, in both talent and conviction. His brand new EP, Union Town, (available now here) illustrates that absolute fact better than anything he's done yet, especially as ALL proceeds will go toward the fight for the rights of Union workers across the country. ALL proceeds. 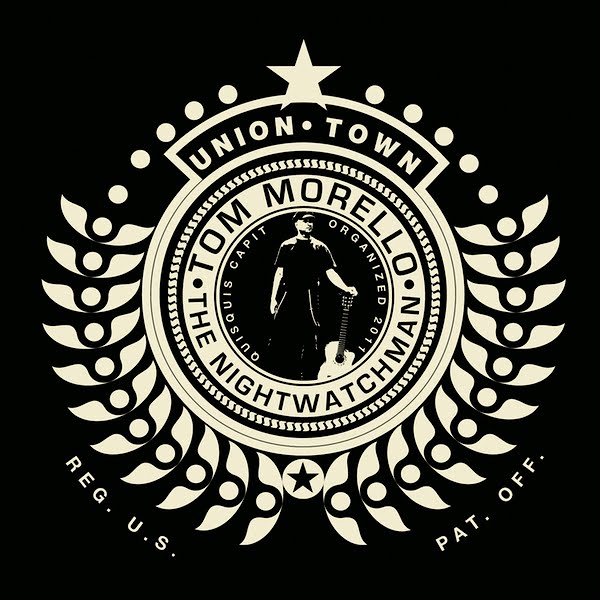 The album of Pro-Union, Pro-Labor, Pro-Working Class songs was recorded in four days right after Tom (a card-carrying Union member himself) returned from the massive rallies and Capitol sit-ins in opposition to Governor Scott Walker's (BOO! HISS!) attack on worker's rights in Madison, Wisconsin this past February. He and his Freedom Fighter Orchestra (Wayne Kramer, Dave Gibbs, Carl Restivo, Chris Joyner and Anne Preven) play the 8 songs of originals and classics with such gusto, you can almost feel the chill of the Wisconsin winter - indeed, I had chills many times during listening to these seriously important tunes.

None more so than the live version of The Nightwatchman's own Union anthem (from his first album, One Man Revolution), "Union Song" that ends the EP. It starts with Tom belting out a speech to rile up the 100,000 people he's playing to in Madison, and you can hear the crowd starting to believe that they really can make a difference ... that we can ALL make a difference, when we stand UP, and stand STRONG - Together. That one is book-ended on the front side by "Union Town" which Tom wrote the day he returned to L.A. from Madison, as inspired as he'd ever been. The recorded version is a true rabble-rouser, complete with the hoped-for and received Morello-ian guitar solo that sears through all the madness as much as the lyrics do.

"Solidarity Forever" is sung to the tune of, appropriately, "The Battle Hymn Of The Republic" ... Solidarity Forever, for the Union makes us strong! Amen to that. The EP has its acoustic ballad moments in "Which Side Are You On?" (written in 1931 by a Kentucky coal miner's 12 year old daughter, Florence Reece) and even a finger-snapping jazzy turn in the Merle Travis classic, "16 Tons". I was listening along to the opening notes to "Wall Against The Wind" when I thought, "This sounds like a Nightwatchman song" - which it is. Meaning, he's been around doing this for long enough now that I recognized the sound as distinctly his, without question. Cool. "I Dreamed I Saw Joe Hill Last Night" is slow and serious, and Tom made up the music to go with the lyrics that he'd read in a Joe Hill biography. They recorded it with the lights down way low, to capture the haunting quality of the ghost-y lyrics. They succeeded.

Three generations of Morello's (and friends) sing along to the now-signature closer of a Nightwatchman show, Woody Guthrie's "This Land Is Your Land" - always with censored versions intact, and always a reminder of what our great country is SUPPOSED to be. And, sadly, how far we've been led astray from those ideals.

That is true, but instead of feeling unbearably daunted, these songs and ideas UPLIFT and EMPOWER. As Tom says, they are meant to show how music is another form of guerilla warfare. It's a fact. It gets people inspired to get off the sidelines and get involved, to do SOMETHING. To take back what's rightfully theirs ... life, liberty, the pursuit of happiness, respect, equality, and JUSTICE. When you get a giant crowd singing along a chorus of truth, you can feel the change a-coming. And that change will not happen in boardrooms or halls of Congress ... it will happen in the streets of this land, that was made for you and me.

Get Union Town right now, to support your brothers and sisters out there fighting the good fight, and let them know that they're not alone in this, or any, struggle.