Phew! LOTS going on all the time, that is for sure. In just the last week alone on the global scale, we had the Royal Wedding, then they find Osama Bin Laden (I have plenty to say about that, but today is not for that kind of dealing), and all the other stuff constantly going on. It's hard to know where to focus one's attention span at times.

That is certainly true on a personal level as well. I had my dear friend Christine in town for a visit and we went nuts like it was high school spring break. We're not proud. Then all the usual hustle and flow (great movie), and it was only the other day that I had a bit of time to just cruise around and LOVE where I am. It also just so happened to be hot enough out at the beach for the first official plunge into the Pacific after our morning constitutional along the shore. BLISS! As we let the water droplets evaporate off of our skin in the morning sunbeams, Jenny said, "Summer Sequence Initiated", like a future spaceship person. And so it is ON. 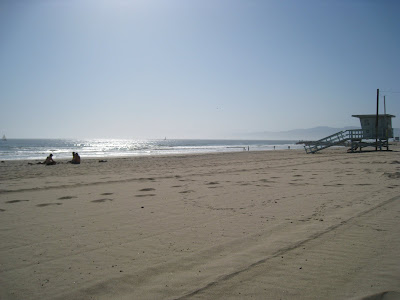 The day just kept getting better from there. Perfect mocha at the French. A fast, nice and smooth experience getting my passport renewed at the Venice Post Office (! I know! But it's true!). Pretty much the whole beach to myself, which brought on the season's first tan lines (which last year took a drive to Palm Springs to obtain - in August)! I had nothing but good thoughts as I listened to the waves roll in and the occasional seagull squawk. No headphones necessary. 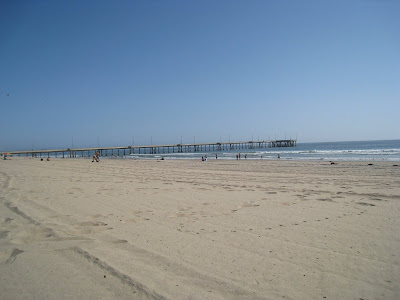 I then decided to just cruise around on my bike and take streets I normally don't, just to see what was going on around the neighborhood, and every last area was bursting out in unrestrained beauty. The Canals were ridiculously sparkling ... 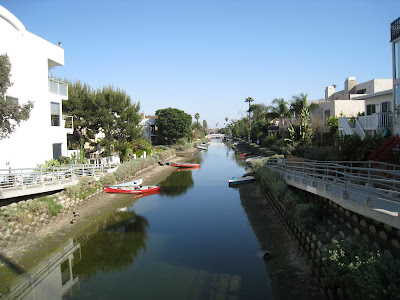 I found a mock orange (the scratch and sniff smell of "California" to me) right up the street. I found a utility pole on Oakwood that had gorgeous roses snaking up around it, just for fun. 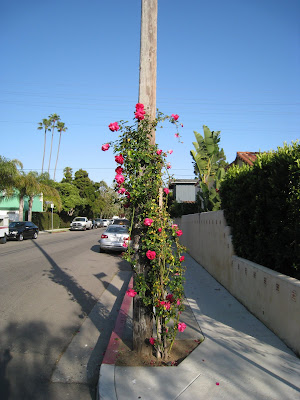 My favorite Doors song has always been "Love Street" and riding past this crumbling, but stop you in your bike tracks lovely house on Milwood, that tune immediately sprang into my head. The lady who was outside watering the flowers didn't speak English, but she seemed happy that her green thumb made me so happy. 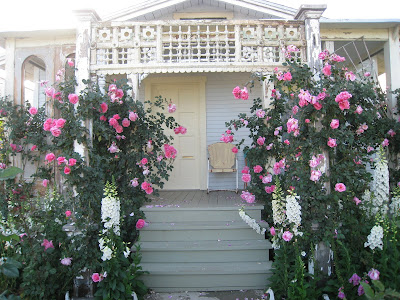 Taking Linden back toward Venice, I saw this house, just in time for Mother's Day (and the real origin of the day here WAS to stand against war), all brightly painted and Code Pinked up. 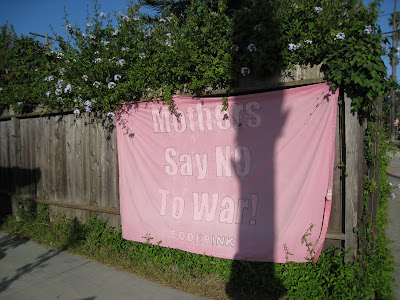 Among even more stunning roses here was this pole, with the same saying on each side in different languages: 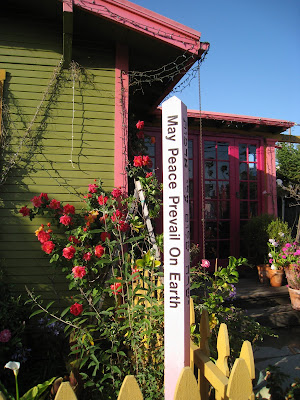 If everyone could take a moment and be grateful for all that we DO have, every day, I think that that Peace really CAN prevail on Earth. But not by celebrating in the streets over a death, not by air striking some other country over their own business, not by bitching at someone about a parking spot or some such trifle, not by being a general tool over not big deals ... but by just relishing what we have in so much abundance, everywhere we look.

I am always accused of being a big flower child type, which is fine by me, but I'm also happier than a lot of the accusers, with a lot less. So there.

That glorious day ended with a typically profound sunset, followed by what might be my last meal choice, if given one - Jennifer Everhart's Aloha Classic pineapple pizza. With Red Stripe. I am a lucky human, to be sure.

Labels: I love you Venice.