A whole bunch of Venetians (20+!) took the show on the road and made the trip way, waaaaay past Lincoln last weekend, for the opening of our dear friend, artist Tom Everhart's opening of new works at the Animazing Gallery in Soho, NYC. All of us took that city by storm, and it was made even better by the fact that we were all together, a merry band of beach bohemians in the big city. It was awesome.

Crashing The Party - The Arty-Fact Paintings was the reason and centerpiece of the trip, and it was the best (and at 95 works, the biggest ever) Everhart show I've ever attended, and I've been to a lot. I'm sure a lot had to do with the splendid company, but it also had a lot to do with seeing the overwhelming appreciation for an artist whose work I have the delight and pleasure of seeing on an almost daily basis here in Venice, in a packed house of super-fans of his work (so much so that I believe it might be sold out). 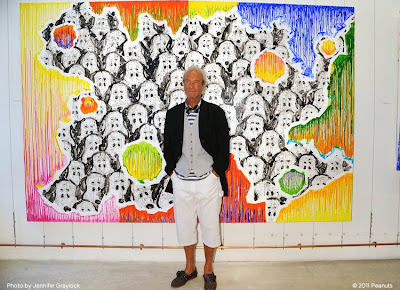 I also have the distinct privilege of insightful conversation about art with Tom, all the time. I'm a much smarter and more appreciative connoisseur of art due to the years of rapping about it, arguing about it, and loving it with Tom and his darling wife, Jennifer (one of my main BFF's). 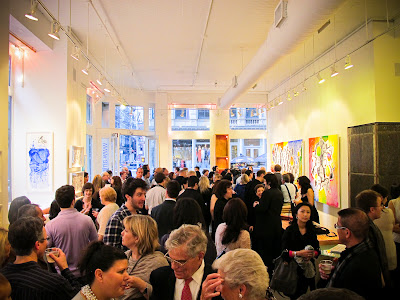 People (journalists, art critics, the general population) often mistake Tom's art for being "Inspired by Charles Schulz's Peanuts" gang of characters, when in reality, and I'll quote Tom here, after a conversation we had post-show, "It's more accurate to say that my work is a visual language I learned from Schulz that allowed me to produce work in a new way of seeing events, moments, experiences, inspired by my own life." Meaning, through his deep and enduring friendship with Mr. Schulz (who he calls "Sparky") until his death in 2000, Tom came to see life through that lens, and just happened to be able to exactly replicate the lines in Schulz's work, which no one else had been able to do, and why Schulz respected Tom's work enough to allow him exclusive license to utilize his characters in Tom's fine art pieces. 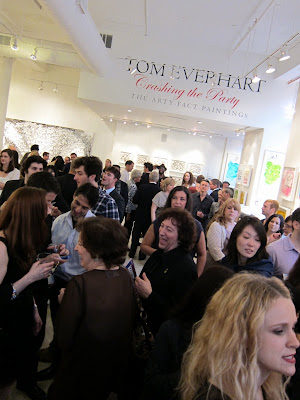 So you might be seeing Snoopy jumping off a cliff, but Tom saw it as Jenny launching herself into the waters of their beloved part-time home of Tahiti. Or our old friend Sponto as Pig Pen. Or me as a lei-wearing beach Snoopy. Or Charlie Brown as a big-headed kid in the neighborhood (just kidding). Or even a mass grouping of Snoopys, with a dose of social commentary about over-population in there for good measure.

From the Press Release for the show:

"Everhart attempts to create a dialog among the paintings that addresses his concern about over-population and the strain it has put on world resources while juxtaposing this against the isolated, open, tropical areas that seem to live in harmony with nature. On a more personal level, Crashing the Party is Everhart's way of expressing how he feels about the artistic path he has chosen. Putting aside a classical education, Everhart brazenly carved out a successful career in the fine art world with his paintbrush and sheer audacity. His choice to focus an entire career on the subject matter of a single cartoon is considered scandalous within various circles of his own art community, but inevitably, this superficial viewpoint disintegrates when the sophistication of the work exposes itself."

You get it now. And most likely love it, as the masses squishing into the Animazing Gallery certainly did. I've never seen anyone with a more constant and inspiring work ethic than Tom, and it was such a joy to see it celebrated like it was in New York last weekend. 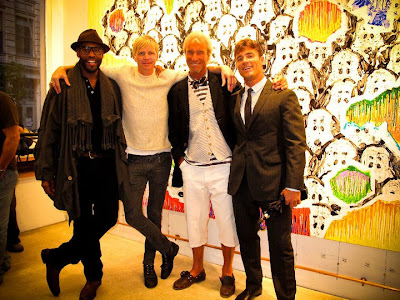 Venice was represented by the Everharts, of course, but by local shop owners (Bunny & Sandor with Leaf), restaurant owners (Mercedes), Men about town (Alan Shaffer - missing the Venice Art Walk for the first time in all its years! - Destin, Taylor, Chris, Kwaku), dear friends (Mara & Henri, Darcy, Marischa & Ricardo, Paulyn, Me), Catherine and Tom from local biz, Don Francis Framing (who did all the lovely frames for Tom's pieces), Former Venetian/Now New Yorker (Sarah), (I'm forgetting some, I know it) and the show was even installed (awesomely) by Dave and Paul, of our own local Art Gallery Services, who drove the art across country straight from Abbot Kinney. Plus all the friends from all over the world, new and old. 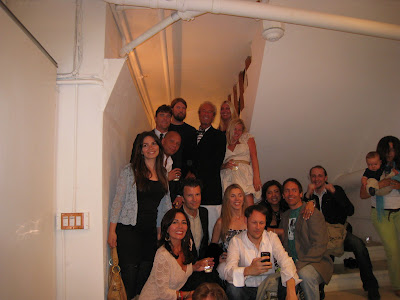 Jessica Simpson and her fiance, Eric Johnson, good friends of the Everharts, had the paparazzi and Access Hollywood in the house too, so the whole country got to see how our Venice art world rolls. 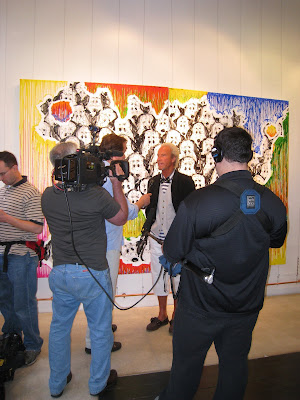 And how we roll is FUN. Gang dinners on the town. The Met to see the do not miss Alexander McQueen show Savage Beauty. Pre/Post Parties at The Crosby Hotel. Running all over, as there was a lot to fit in a fast weekend. All that fun and there was only one police incident, but as our local perp said, "Yeah, but it was a mellow cuffing" - perhaps the quote of the weekend. 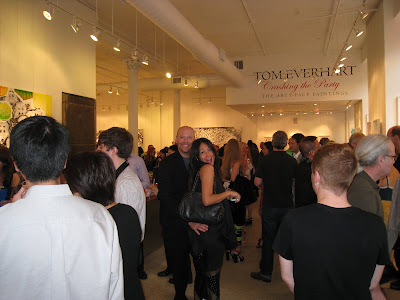 It's a great thing when people will travel far and wide to see art. It's even better when it's about friendship. How very Venice ... Art. Crime. Friendship! 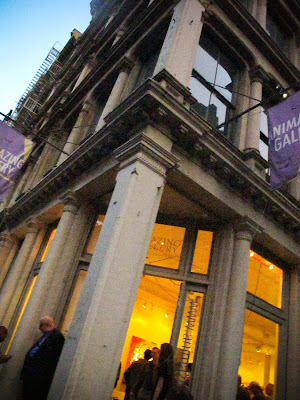 If you're in New York, Crashing the Party - The Arty-Fact Paintings is open to the public at The Animazing Gallery until June 26th, 2011. If you're in Venice, look for the tall, blond guy in paint splattered shorts riding his bike around, and shake his hand for a job greatly done. And a fun, friend-filled life being lived, in true Venice style.

*Photos by Kwaku Alston, Alan Shaffer and Me.
Posted by CJ Gronner at 8:07 PM