A brief hiatus to revel and regroup, and now we're back and ready to see what's in store for this new decade. It has been painfully beautiful in Venice since I returned, and that goes for people and experiences, as well as the sunshine and sea.

Since I was a wee lass, I've always written on my calendar at the end of every day a recap of roughly what I did. Always. I could tell you what I did in 7th grade on a Monday in January. This year's calendar for 2010 is by Jane Evershed, a Minnesota artist I've long admired, and it's called "The Power Of Women". I thought I'd rip that that off a bit, and start the 10's off with a few stories about some wonderful Women in Venice.

For a very long time, I've walked or ridden by this mysterious space on Abbot Kinney (1632), with a little handmade sign that said, "Robin's Sculpture Garden". I tried to take my Venice Arts class there once to look inside, but it seemed to be kind of randomly open. And I'm usually flying by on my way somewhere. So it was on a bright day right before I left town for the holidays, that I met the Robin of Robin's Sculpture Garden at the Farmer's Market - she's the sister of Jim who runs the Market! I made arrangements to come over to the Garden and talk to her that very afternoon.

There were people talking to Robin when I arrived, so I just took my own look around before we settled in to chat. There are sculptures all over the place; mosaics, blown glass pieces, resin, metal, wood, all sorts of materials. And you can tell that they all have a story. 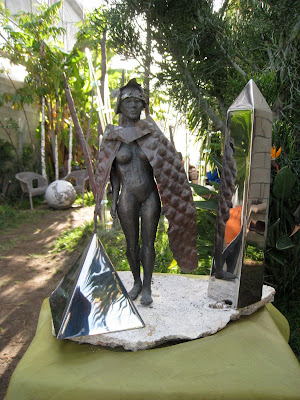 The entire back is an open-air studio where Robin Murez creates her work. Her 10 year old yellow lab, Oscar, is always at her side. He watches carefully, as Robin talks while pouring resin, classical music playing gently in the background. It's very free and casual, and Robin seems to welcome any and all interruptions, sharing her work and her space with anyone who takes the time to enter. I'm not proud to say it took me a long time of passing by before I investigated it, and it's time I regret. In this day and age on Abbot Kinney, to have a space that is solely about creativity over commerce, and expression over posturing, and be simply about ART - well, it's all too rare. But what Venice is supposed to be like, right? 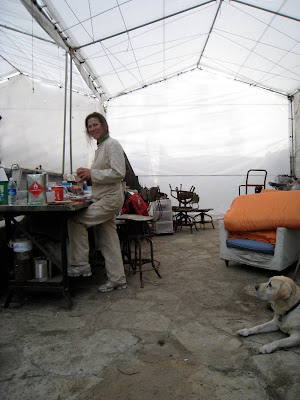 Robin thinks so. She was born and raised in West L.A., but has lived all over. She was a lawyer representing professional athletes for years, and then went to live in St. Louis with an ex-boyfriend. While there, she decided to get her MFA at Washington University, and started to get commission work for her sculpture works while still in school. I asked how she chose sculpture over another medium, and she said, "Do what you love." When she was a little kid, she loved sculpting and ceramics, and always knew where all the best mud was. She still does.

She soon realized that her interests lied in Public Art vs. the elitism of museums, and that she found a true joy in making public spaces more enjoyable. She helped to found City Museum while in St. Louis, a super cool space. Then she did commissioned work for the Laumeier Sculpture Park in the shadow of the Gateway Arch in St. Louis, and began to get invited all over the world to do installations and enrich environments with her art. She will tell you that her work is about "Creating good sensations", rather than making political statements or anything else. And it certainly comes through in that way.

Walking around her work/showcase space on Abbot Kinney, you feel a sense of the magical. Her little fairy sculptures hanging in the trees, the Egyptian symbolism, oversized glass bamboo shoots, blown glass hearts ... all of it makes you feel like you've crossed over into a suspended space and time, one where you are encouraged to relax, breathe, appreciate, and celebrate not just art, but love of life. 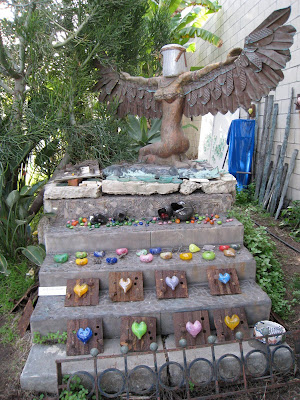 Robin has occupied this particular space on Abbot Kinney for the past 8 years. The benevolent owner of the space donated it to Robin, as a supporter of the arts, and "until he sorts out what he's going to do with it". Let's hope that takes him a good long while, because a special space like this, open to the public whenever she's there, is a true gem in our midst.

All the art on display in the Garden is for sale, and people wandered through and made purchases all the while I was there. Her real bread and butter is still the commissioned works (Oakland Zoo, Southern Illinois University, Union Station, etc ...), but her real energy, it is clear, is devoted to creating beautiful public spaces. Robin has all sorts of wonderful ideas to beautify Venice, and spends her own time and effort trying to do just that. She has a great idea for a Venice Neighborhood Ball Project, where different neighborhoods around town would have a symbol and a mosaic sculpture ball identifying the area. She had so many signatures of support for the project that the Grant/City Of L.A. people thought they were bogus, so the project is now on hold, sadly. 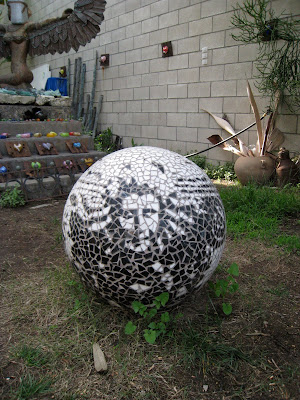 Another cool idea (Remember, we need cool ideas. Look at how strange and out of proportion Windward Circle looks with the one Graham woman torso alone there, representing nothing.) is to embed glass in the pavement on the old Canal street ways, so they would shimmer and gleam like when they still contained water. Sweet! Or construct bronze versions of the camels Abbot Kinney really brought over back in the day, to install at either end of Abbot Kinney Blvd. welcoming people, with little bronze camel footprints up and down the street. Or "Pocket Parks", where little spaces like the tree circles on the walk streets could have a sculpture, each unique and different, that you could circle with an herb garden that would also be useful. Wonderful! But she'll also tell you, it's disappointing how hard and frustrating it can be to get support for public art, even in a place like Venice that is meant to be ALL ABOUT exactly that. 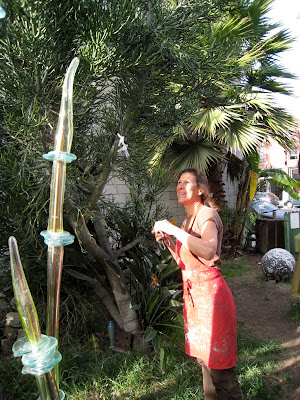 As Robin said, "Venice has been an artistic and playful community from the very beginning. Art is the very Spirit Of Venice!" Increasingly, even on the Art Walk each spring, you feel like that is less and less so. It's more about sales than spirit. Even with fun things like First Fridays (which Robin hosts a fire-pit with music during - check it out this Friday!), she said that merchants were complaining that people were dancing in the streets (!Complaining! What?! That's what areas STRIVE for, isn't it?), instead of celebrating that joy. Boom! No more live music on the street during First Fridays. Really? That's not REALLY who we want to be, is it?

No. It isn't. Along with the obvious loves of ocean, bicycling everywhere, and the PEOPLE and family of Venice, Robin loves the Pacific Resident Theater, another outpost of wonderful art and expression right in the middle of town that many have never attended. So let's think about all of this as a new decade begins ... and what we as a community truly want to be about. I think if we're honest with ourselves, we'll find that what drew most of us here was the community. The expression. The sheer ART of it all. Once we re-identify that spirit, it's thought into action time. With people like Robin spearheading these artistic initiatives, you realize how possible and lovely it all can be.

Stop by the Sculpture Garden sometime soon yourselves. It's very hard not to be inspired once inside.
Posted by CJ Gronner at 4:23 PM