Apparently there really is something called The Del Taco Super Special Show (I saw a commercial), but that's not what I'm talking about. This is a little story that happened amid the mad frenzy of holiday fun and getting ready to leave town, that I wanted to share then, and just remembered now (when I saw that commercial).

A few days before Christmas a bunch of us were at The Red Garter to see Shooter Jennings, Carter Falco, and Dan Coakley play. When the Garter closes, there aren't many late night dining options, so we walked down the street to Del Taco. I'm not proud. Once inside the garishly lit establishment (which I'd never been inside of ... it's more of a drive-thru venue), we were delighted to be met with the beautiful strummings of a Mexican man on his guitar. He didn't care if anyone was listening or not, he was completely immersed in his own special vibe. 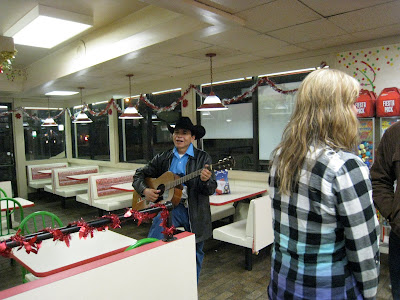 Now I'm not gonna lie to you, we had all partaken in some holiday cheer of a whiskey nature, and that may have contributed to our festive camaraderie, but I'd like to think it would've happened anyway. When he finished one lovely song, I said, "Gracias! Feliz Navidad!" He smiled and began playing "Feliz Navidad".

The whole place started singing along. The guy (I think his name might have been Pablo, but that part's hazy, I'm embarrassed to say). Us. The entire Del Taco staff - all the way back to the fry area). The Drive-Thru customers. We were in full-throated unison when some gangster-y looking guys came in and cracked up. They didn't exactly sing, but I heard one of them humming.

It was adorable, and kinda special. I said to the guy ringing us up, "I didn't know you had entertainment here!" He replied with a grin, "Um, this is the first time." Classic.

Sometimes the best musicians (or best people, period) are the ones without any glory or acclaim, who are just doing what they love, for the love of it. This was clearly the case with this wonderful, warm and open fellow, sharing his gift just for the heck of it in a fast food restaurant. 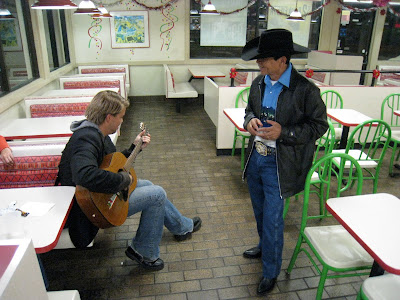 We started chatting, and in the guy's limited English, he explained that he was Michoacan, he loved giant belt buckles, and that his guitar was 26 years old, and has been his very best amigo. My brother, Paul (also sometimes referred to as Pablo) said that he played guitar too, and Michoacan "Pablo" held out his beloved guitar for him to play. Paul started strumming one of his own songs, and one minute later, Pablo started singing along perfectly, down to the exact pauses, and creating perfect harmonies with the chords. It was all in Spanish, but I recognized "Corazon" and "Te Amo", and that's all I needed to know. Both men had huge smiles on their faces the whole time, as did everyone listening.

After much clapping and laughter, we all shook hands and went off into the chilly night, warmed to the core by one of life's perfect moments that we'd all just shared. It could have happened anywhere, but it happened in Venice.
Posted by CJ Gronner at 11:25 AM