Happy Martin Luther King, Jr. Day! One of my favorite - and most worthy - holidays. Slooowly but surely, we're realizing Dr. King's dream, and I really hope he can see the positive changes somehow.

Friday night I went to see one of my favorite bands, State Radio, play at the El Rey. They're favorites because they rule, but also because they are as active as activists get, on top of being some of the best guys around. I saw a big sticker of MLK, Jr. on one of their equipment cases, fitting, as they surely are on the front lines of the human rights battle. 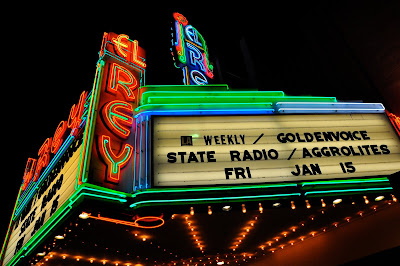 I'm sorry to say we missed the openers, The Aggrolites, which I'll blame on Jack Daniels. By the time we got inside, it was all State Radio's message, from the big propaganda looking banners (STOP THE KILLING IN MYANMAR! SAVE SUDAN! ELDER RIGHTS NOW! PRISONS CAUSE MORE CRIME! WAGE PEACE!!), to the level of excitement they generate. This is the "Lefty Rides Again 2010" Tour, in support of their excellent new album, "Let It Go".

The room soon darkened and the crowd went crazy. I smiled to see the State Radio guys take the stage, as we've been friends since the incredible times of the 2008 Justice Tour, and I hadn't seen them in a good year or more. I could tell they were pumped up for this show. Chad Stokes (lead singer & guitar) said, "YES! We're State Radio from Boston!" and they threw down the opening song, "Arsenic and Clover" from the new album. People already know all the words, and sang along with gusto. Maddog (Mike) Najarian beat the pulp out of his drums, and the crowd had mad reverence for every bass note Chuck Fay plucked, from the first one to the last. The fans LOVE their State Radio ... to the point where at song's end, Chad said, "Thanks for showing that energy!" 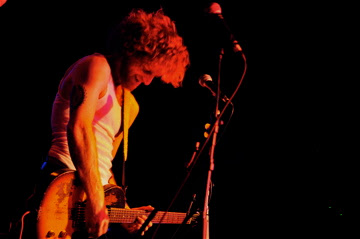 Then they went right into "Gunship Politico", with its rasta beats and biting lyrics. Actually, every single word of a State Radio tune matters, and one would do well to study the lyric sheets, as an education, and a call to arms. I'm pretty sure most in the house do just that, as they sang along all night ... "WATCH OUT!" was a group yell, and a stern warning to oppressors everywhere. The band is crazy tight as a unit, and so rocking that you could almost forget how deadly serious the content is. But you don't, because you care. Right? From there they blasted straight into "Revolutionaries", both a rad song and an apt label for these guys. 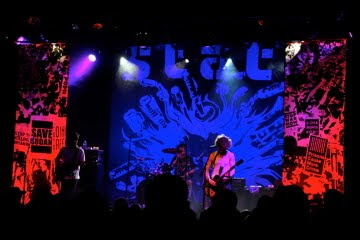 "Mr. Larkin" was next, the touching song about the elderly, that also features super interesting changes in tempo, with seamless transition. Love it. "Dr. Ron The Actor" followed - and was torn up - and despite the continued shouts for various favorite songs ("We played that last night" was Chad's response ... these guys always change it up, so catch them as often as you can), "Omar Bay" was next. That one featured a blistering bass solo by Mr. Fay that had everyone yelling, "CHUUUUUUUUCK!", and deservedly so. 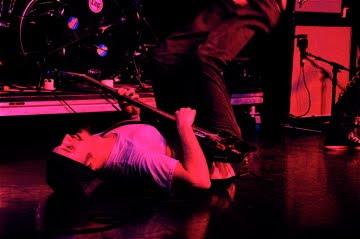 Now if you've ever seen State Radio live - and I hope you have - you'll know that Chad plays a very unique guitar on some songs ... made out of an oil can. And the Oil Can Guitar gets its own cheers every time. It came out for the excellent "Calling All Crows" - which is also the name of the band's service organization, www.callingallcrows.org, that mobilizes musicians and their fans to roll up their sleeves in promotion of human rights.

"So we're calling all crows - they coming up slow - it's gonna be a showdown - said the rebel to the revolutionary, come with me. If you feel like you are witnessing a movement - then get up girl and let them know you're free" is how the anthemic chorus goes, and hopefully how we all go. Get involved! There is no better time than now, as witnessed by the rapidly filling money jar going to OxFam for relief to Haiti. Again, PLEASE get involved!!

The next one was for "all of Maddog's people". "Mansin Humanity" is about the genocide - and it was a genocide - in Armenia, from where the Najarian's descend. I was watching Maddog during this angry rocker of a song, and it seemed to me that he played with extra (if possible) ferocity. And rightly so. If light continues to expose Man's inhumanity, there's a better chance it won't be repeated, we hope. Getting the ferociously moshing young people in the pit to learn about such awful events is another good angle to try. (If they didn't get concussions and forget it all - it was rough in there for a bit.) 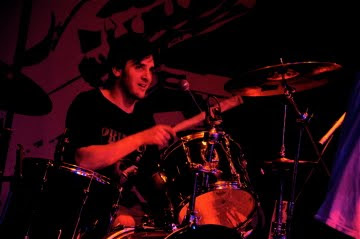 Chad invited a special guest to the stage to join the guys on a tune, The White Buffalo. Just as I was thinking that the White Buffalo reminded me - in both posture and voice - of Joe Cocker, I recognized the song as J.C.'s "She Came In Through The Bathroom Window." Excellent. It sounded great, White Buffalo's drink spilling all over the stage with gusto, and the time they were having was even greater. 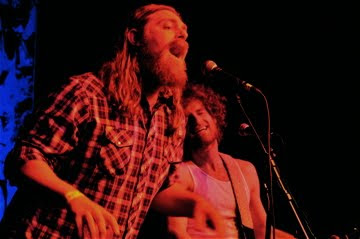 "State Inspector" was up next, and prompted an even harder core pit of mosh, especially when Chuck played half the song lying on his back in a frenzy. It also featured a LOUD Call and Response between Chad and the room that "Whoa-oh-oh-oh'd" everyone back into a calmer, reggae disposition, thankfully. One of my favorite, and catchiest, SR songs is the one they wrote for their friend who died in Iraq, "Camilo". It's powerful stuff, and the crowd fast-clapped along all through the remembrance that people are STILL fighting over there ... for what? It has a Rage-y ending that always re-fires everyone up. Chad played the harmonica on the next one, "Blood Escaping Man", and there was more moshing. That's hardcore, when you mosh to the harmonica. 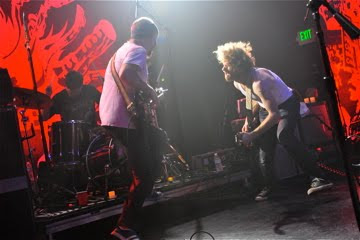 State Radio is proudly from Boston, and their "Knights Of Bostonia" is exactly what you'd want to hear in an Irish Pub in that town, hoisting a pint (or Jameson) and loving your fellow man. The jig stylings of it still proved mosh-able, and these Bostonian Knights were rewarded with a loud "YANKEES SUCK" chant at the end. Ha!

The last song of the regular set was "Waitress" and I love it. It again features reggae beats and an "Ay-y-y-y-YO!" chant, as well as smart and conscious lyrics that make you appreciate how deftly this band gives you your medicine with a spoonful of sugar/fun. People went nuts. 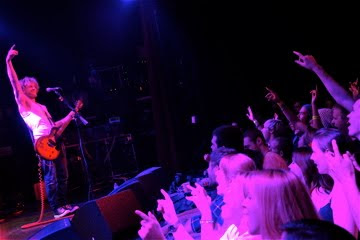 Rhythmic clapping began right away for an encore, and Chad quickly came back, this time with an acoustic guitar and The White Buffalo. I'm going to let myself think this next one was for me - Dylan's "Girl From The North Country". One of my theme songs. It was lovely, though I'm not sure if the White Buffalo will remember it. That's what I'm here for! 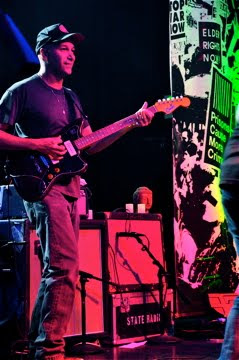 I'm often reminded of Rage Against The Machine when I see or hear State Radio, both because of the rock, and the walk both bands walk, bettering the world one power chord at a time. So it was fitting that for the finale of the evening, State Radio was joined by Tom Morello for "Gang Of Thieves"! The fans had to be peeled off the ceiling when they saw them all on stage together, melting faces off. Tom had a fan down front hold up a paper plate with the lyrics scrawled on it for him, and I flashback-ed to The Justice Tour again, when they would play this one together at each show, always to benefit an extremely worthy organization. Tom called it "his jam". And it showed in the fun they were all having. Tom's crazy guitar solo didn't hurt either. The guys all blew the place apart together, and left the El Rey Angelenos sweaty and smiling. 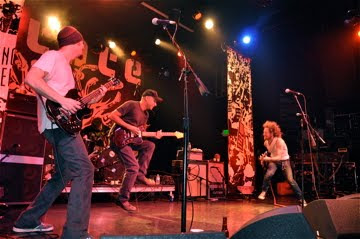 The new State Radio (Radio D'Etat) album, as I mentioned, is called "Let It Go". I hope that all things work out so that circumstances will be such to let YOU go ... to a State Radio show. You leave all rocked out, sure, but also as a better person on some level. The awareness, the caring, and the conscious-raising they bring to every performance is humanity at its best.

Thanks for a FANTASTIC show, Guys! Safe travels, and fists raised in solidarity to accompany you all along the way.