"Welcome to zee Goddess!" is how Sandrine Klein sweetly greets all who enter into her delightful shop, The Goddess, now on Lincoln Boulevard. It is a sanctuary of gorgeous beads catching light, whimsical painted furniture, the tres jolie jewelry pieces hand-made by Sandrine, as well as clothing from local designers, and cool scarfs and head adornments. I have known lovely Sandrine for years, and have yet to see anything but an aura of goodness and love surrounding her. I simply adore her. 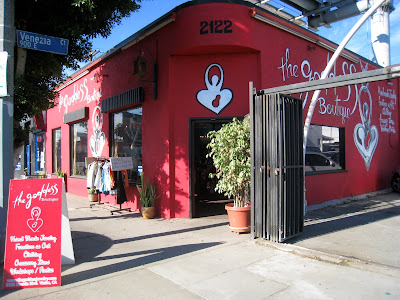 Sandrine was born near Bordeaux, France (wine country), and raised in a bit of a vagabond style around France. She trained as a Pharmacist, interestingly (I had no idea), and specialized in helping with figuring out dosages for children. You can tell how very sensitive she is, and after a while of that work, involving sick and dying children, it became too much for her to deal with over and over, and she was looking for something else to do. About this time, she fell madly in love with another vagabond type, and one evening (perhaps some Bordeaux was involved), the happy couple were playing darts and decided that wherever a dart hit on their World Map, that is where they would move to. I love that.

Well, the dart landed on Guadalajara, Mexico ... and off they went. They spent a while there, but didn't love it at all, and so back-packed off to Puerto Vallarta for a visit. They wound up entranced by that town's beauty, and soaked it up for six years, among the "colorful and genuine" people of P.V. Sandrine couldn't work as a Pharmacist there (as we all know Mexico has different drug rules) and so she picked up work teaching French lessons, ultimately opening her own petit l'ecole. She also started reacquainting herself with her artistic expression, and began painting with acrylics, and creating bright furniture. 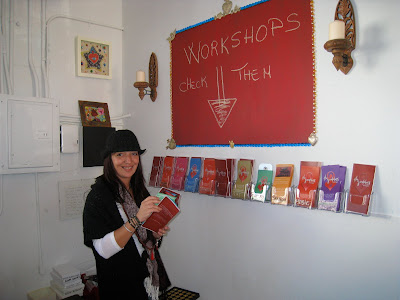 The boyfriend decided he wanted to live in Los Angeles, so they began a bit of a back and forth scenario, until they chose to split up. By this time, Sandrine's sister, Valerie (who used to have the best Venice clothing store, Slave) was living in L.A., so Sandrine visited more often. During one of these visits, Valerie was in a boating accident with a friend of hers, Stephan, and Sandrine raced over to help mend them up with her Pharmacy skills. While cleaning off the bloody mess of Stephan's face, Sandrine said, "I had this urge to kees him" ... and they've been together ever since. Stephan worked in Real Estate in Venice, so that was enough to convince Sandrine to move up to the States, and accept his proposal to become his wife, and the lovely Stepmother to Stephan's son, Quinten.

She needed something for herself to do after a while, and had a dream about this little available house on Abbot Kinney Boulevard. She discussed it with Stephan, and they decided to sign a lease on the house, without even knowing what kind of business it would contain!! While killing time, she had begun to make jewelry while sitting on the beach, putting it in Slave and giving the pieces as gifts. The jewelry making came very naturally to her, so she decided that she would open a jewelry store, but one where people could participate and create their own, or have her make one of her wonderful custom dazzlers, using what she calls, "Kreative Karma". She studied up on gems and their healing properties (still the healing Pharmacist at heart), and self-taught herself all about making jewelry, all the way up to making molds and casting. Around that time, a friend gave her a book called "The Goddess", and it contained the quote that she has kept around her (painted on the floor, hung up on the wall, recited to you by heart ...) ever since:

And so The Goddess store was born in 2000, as she knew who she was and that her dreams would work. I remember walking into her darling store in the house on Abbot Kinney, and just falling in love with both the environment and the Proprietress instantly. I was having a birthday party and had a kind of weird colored dress I was going to wear that night, and no appropriate accessories to accent the decolletage, dangit. Sandrine asked me to show her the dress, and said I should come back in a few hours. I left it all up to her, and went home to get ready. A few hours later, on my way to my little bash, I stopped in and smiling Sandrine held up the most perfectly complimenting (not match-y, but illuminating!) necklace, that I nearly (and probably did) choked up. I loved it - and still do. From thereon out, I would stop in for a double cheek kiss, or bring in a broken necklace that some other shoddier jewelry maker made, and bring in friends who needed something to go with their own out-there outfit visions. 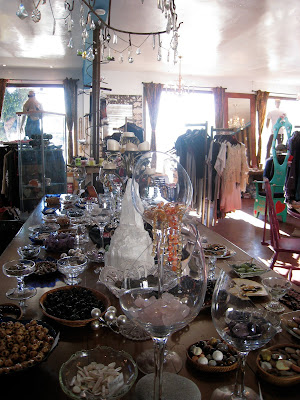 The Goddess thrived for 6 years (hosting fun things like "Bead and Breakfasts" and "Goddess Nights", and sparkling up scores of Venice citizens), during which time she created her "most precious jewel I have made", her son, Liam (now 4). She beams when even mentioning the names of her boys, and her eyes gleam with pure love. In fact, her signature "Goddess" line of jewels represents "the heartbeat of a mother's love, the deepest womb and the goddess within." Then came the time where she wanted more time with the kids, so she closed The Goddess on Abbot Kinney, and we all missed it terribly.

Her sister, Valerie, had briefly re-opened the iconic Slave, this time on Lincoln Boulevard, just north of Venice Boulevard (2122 Lincoln). When the economy took a drastic downturn, Valerie got out of the retail business, and the space was available for Sandrine to take it over and recreate the store she too missed. And a beautiful store it is. 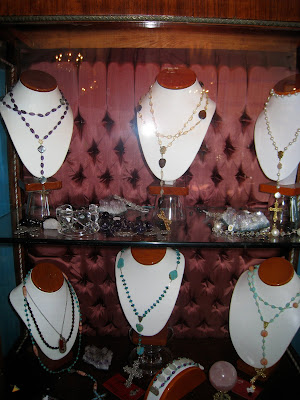 Beads and Sandrine's creations adorn all the wall space, and her brightly hand-painted furniture pieces kick up the fun a bunch of notches. You can bring in an old beat-up bureau, for instance, and Sandrine will transform it into a work of art that demands glee just from looking at it. You could tell her the colors you'd like, or a quote you love, or you could just leave the whole thing up to her, and be delighted whatever the outcome. She does custom jewelry for wedding parties, special occasions, or just a treat to reward yourself. 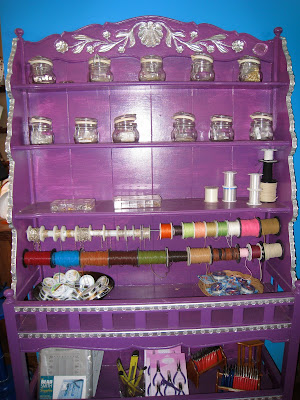 In addition to all the possibilities to help you shine, Sandrine also offers the knowledge to learn to make the art yourself. Lots of different jewelry making workshops are on offer, as well as private classes and even classes for kids' birthday parties, wedding showers, and the like, all taught out on the sunny patio behind the shop (which also hosts a monthly Flea Market with booths {and mimosas!} featuring local artist's work). You can check all of these events, with dates and times, on her www.Goddessstudio.com website, or just give a call.

If that's not enough to enrich your soul, you crazy kids, you can also take French and Spanish lessons, learn Songwriting, Guitar, Painting and Creativity at The Goddess Studio, the former taught by dear Sandrine, and the rest by other local lovelies. Seriously, no matter what you partake in over at The Goddess, you're going to emerge feeling better about yourself, and your place on this Earth. You can't help it. 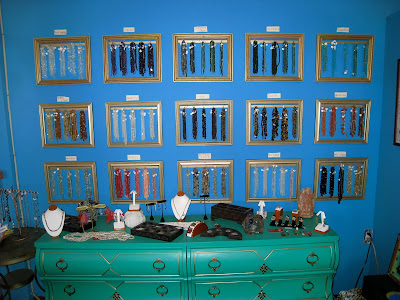 We talked about our Venice experiences, and she told me how lucky she feels to be in a place "where people pay to take an airplane to places like this!" And how her Mother will come visit from France and just sit on the steps by the Post Office, watching all the different characters go by. "You will never be bored in Venice, it is very Cosmopolitan." As Sandrine also said, "There is something special here, even the style. It's not all hippie, it's not all grunge, it's a special style in Venice. A Californication." I know exactly what she means, and you will too when you're here.

The beach, the meditation, the walks, and the dolphin sightings all permeate the air, and you can almost see it in Sandrine's eyes as she talks about it all. She - and her calming oasis of a store - are blessings to know, even as the real world and Lincoln Boulevard zoom by right outside the door. Please do yourselves a New Year's favor, and go visit Sandrine at The Goddess Boutique and Studio soon. Feel free to say I sent you. You will see the same sparkle emanate from this fair lady, and light up your own life.