Last week I told you a story about my brother, Paul, and a guy playing music together late-night at Del Taco. Well, last weekend, the same brother and I were at the Canal Club for Happy Hour, all happy and excited for sushi roll deals and mango margaritas.

There was a guy sitting alone at the table right close to us, and I gave him the smile/nod combo to acknowledge how super close our proximity was, and then immersed myself in sharing the latest dramas with my brother. There was a basketball game on the t.v. at the bar, and I found myself glancing over a lot, which to the guy next to me probably looked like I kept checking him out. I finally said, "I'm sorry, I'm not staring at you, there's a game on over your head", just to get it over with. That was the ice breaker, and we soon got to chatting with the guy, whose name was Alberto De Almar.

Alberto is 62 ("You know how you keep looking young? You drink Kombucha and take a lot of mushrooms and acid."), and quite a character. It didn't take long before Paul and Alberto figured out that they are both musicians, and both play guitar. Alberto even wears special glasses so he'll look like Bono ... which he kind of does. He's Spanish ("100%"), and spent a bunch of years studying guitar in Spain under a Flamenco legend whose name fails me now.

Soon enough Alberto was joined by a British lady friend (who told me to understand her I should Google "Essex Girls Jokes". Which I just remembered to do, and it makes a bit of sense now), who was equally interesting, and rather eager to show us "her girls". I egged her on, but she lost the nerve, and instead just showed Paul them on her phone pictures. Lame. 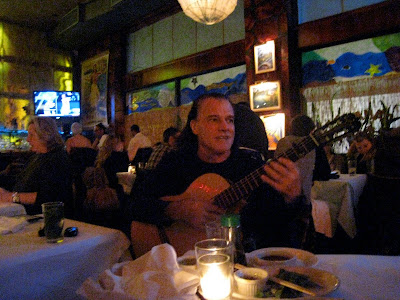 Anita, our favorite Canal Club caretaker, showed up with another round, and that was enough to get Alberto to go outside and return with his guitar. There, in the middle of the loud Canal Club Happy Hour, we were treated to some of the most beautiful Spanish guitar I've ever heard! Ever! Alberto would play the most delicate flourishes, then beat his cheeks for sound effects, making hysterical John Mayer type guitar faces all the while. We joined him on slapping our knees back-up percussion, but he didn't really need it. 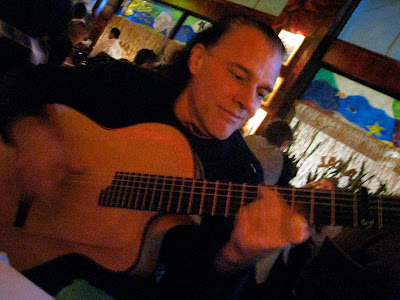 A nearby baby had been crying for some time, and the Dad was up walking her around. He stopped by our table to listen, and the baby not only stopped crying, but raised her arms happily, super into it. Alberto the Baby Whisperer! Too soon, a Manager type came over and said that Alberto had to stop, even though, "Obviously you're really good ... but we have to turn on the house music" or something. Alberto said, "Ok, just one more song ... for Them." - meaning Paul and I, and how he said it made us feel special.

The one more song was from his excellent album, "Furia" ("Fury" in Spanish - and which it is. A guitar fury.) which I now happily own. It was more than beautiful, and he ended it with the neck held high, and a little "Plink!" that put the exclamation point on the moment.

Another bit of Venice magic. And another lesson in what can happen when you open yourself up to whatever - and whomever - you find yourself next to.
Posted by CJ Gronner at 1:33 PM