A 38 year old woman, Eun Kang, was murdered on Tuesday night in her home on the 1600 block of Electric Avenue in Venice. She was pregnant with twins. A 22 year old man, Boneetio Kentro Washington, was caught and charged today with Capital Murder. This is just sickening, and all any of us could talk about all day today.

The stretch of Electric where Ms. Kang lived is all houses on one side, all industrial warehouse stuff on the other. It is also the shortcut I take almost every day as my speedy way to get to Abbot Kinney. It's a one way street there, so I guess I always figure less traffic, faster, just zip home real quick down Electric. I took it home on Tuesday night, in fact, after a little stop at the Grilled Cheese truck (had to try it) in the Brig parking lot. About a half a block from where Eun Kang was brutally raped and stabbed to death, about an hour and a half later. I cannot believe this. 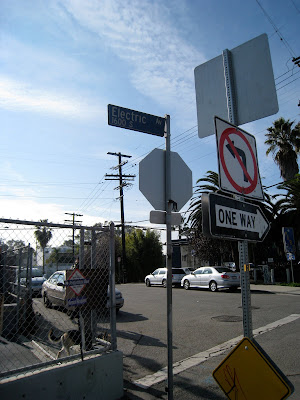 Scary things happen all the time, everywhere, but when one is in your face like this, it makes you pretty shaky. I love to write about the happy goings on in Venice all the time, but the fact remains that idyllic and bohemian as we are, there's also always going to be the dark side. This horrific nightmare appears to be random - they did not seem to know each other. She was carrying groceries inside and the guy followed her in, raped and killed her. And the twin babies inside of her. He was put in a mental hospital just in July, but found mentally competent to go to trial for burglary this past September. This feels like another massive failure of "the system", if you ask me. Everyone I talked to today feels like another massive failure of the system would be to allow this guy to remain alive. I know the death penalty is ultra-controversial and really, a terrible thing in itself, but it feels like it might have been invented for crimes just like this. He's not going to be reformed, he's not safe to be in society, he'll never get out of prison (we hope), so why even bother with a whole trial and all that - the police apparently caught him leaving the scene of the crime, they know he did it. To me, he's done.

I rode past the house today (probably the last time for this shortcut - too much super bad mojo for me there after another super sketchy incident a few years ago) and there were news trucks and all that, as if it's just the latest sensational news story, and not a neighbor and member of a close community. It felt gross, and wrong, to even be riding by. I just really can't even grasp the horror of it all ... but it happened. Right up the street. It could have easily been me, just a short time earlier. Ugh.

All of this can hopefully be a means to be more vigilant, more protective of one another, and more cautious, especially we ladies. I cruise around all the time by myself, and it's just kind of dumb, I guess, these days. We have to have each others' backs, now more than ever. 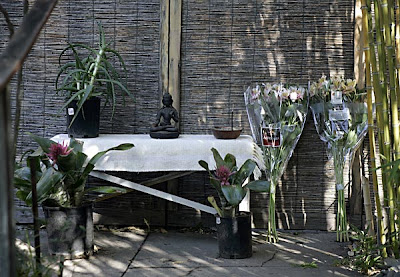 Rest in Peace, Eun Kang and your two unborn babies. I'm so so sorry this happened, for you and yours, and also for Venice. Everyone is feeling the pain.

Be good to each other, and be safe.
Posted by CJ Gronner at 4:40 PM