Sometimes it's kind of hard to get into the Holiday Spirit living in Venice, all beachy and bright. Which got me to thinking, why is it the "Holiday Spirit"? Why can't we be lovely to each other all year long? Well, the answer is, we can.

You see people get all frazzled by the holiday rush of things to do/places to be/people to see ... so much so that they can get a little nasty. I've seen it, and I don't like it. I'm from Minnesota, as you know, where there's a coined phrase - like on T-shirts - "Minnesota Nice". People from there tend to be super nice, ask anyone. (With the exception of the thugs and murderers that a few years ago begged the nickname "Murderapolis", that I got a lot of mileage out of). So it bugs me when you see people bitching about stupid, petty things, especially at this time of the year. We've had some true heaviness around these parts lately ... a murder, friends sick with awful illnesses, etc ... to where any drag happening in my life (looking at you, Verizon) makes me go, "At least I wasn't murdered. At least I'm healthy. At least I don't live in Afghanistan. At least I'm walking on the beach in December." 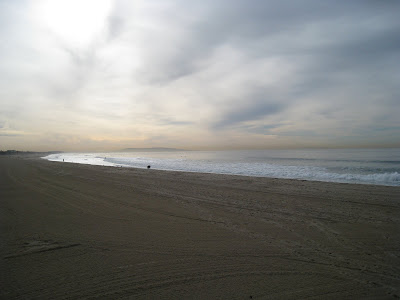 And while walking on the beach in December, I think a lot. I appreciate a lot. Like the fact that I don't have to sleep there. 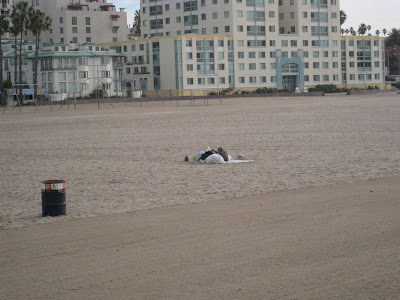 I also talk a lot. I say "Good Morning" to everyone I pass. It almost always gets a "Hello" back, or at least a tough-guy nod. I ask people if they'd both like to be in the picture. When we ask if they'd like a picture taken together, though, it is almost always met with delighted surprise, which makes me kind of sad. Has it become so unusual for people to offer unsolicited help that strangers act like I've just offered them a desperately needed kidney? (Which I've also really offered. It became unnecessary, but still.) Or standing in line somewhere, I'll compliment them on something, and they either look at you like a weirdo, or practically blush from a mere sentence. I think we need to talk to each other more. I've been at dinner recently where every single person around the table was on their phone or texting, not participating in our increasingly rare moment of togetherness at all. "Be here now", I'll none-too-subtly say. I think that's the whole point of this one spin in this skin, to enjoy each present moment as much as you possibly can.

So give it a try. Help someone carry their bundles into the Post Office. Strike up some small talk in line. Hold the dang door for people, for goodness sakes! I went up to this couple on the beach and asked if they'd like their photo by the little sand Christmas tree they'd made this morning. I think the day is better for all involved by the light-hearted, Holiday Spirit feeling of connecting with other humans in the name of JOY. 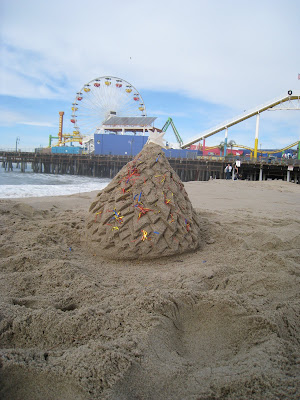 And once we've mastered the art of humanity at the Holidays, I think it's fine if it just rolls on through the new year, and on into always. Don't you?
Posted by CJ Gronner at 1:57 PM