Once upon a time, a beautiful island-born woman named Bunny worked at a store called Chronic Creations in Venice. A handsome, native Californian, Sandor, worked as a Chef at 5 Dudley. They met. That was that. Happily ever after!


But wait! There's more! Bunny and Sandor thought it would be good to open a business together, since he was tired of Chef-ing and she wanted to work with him. She also happened to know the Smoke Shop business inside and out from her time at Chronic Creations, so they decided to give that business a go. They looked all over for places, and in 2000 found this boarded up, condemned looking little house on Abbot Kinney that - underneath it all - looked perfect. They told the Landlord their proposal to turn the space into a Smoke Shop. He thought that was kind of iffy at first, as he "didn't want to attract smokers to Venice." Hilarious. So he went around and did a little casual poll of the neighborhood, and it turned out that, indeed, there was lots and LOTS of support for such an establishment on the block. And so, almost overnight, due to crazy 24 hour days getting it ready, The Green House Smoke Shop was open for business. 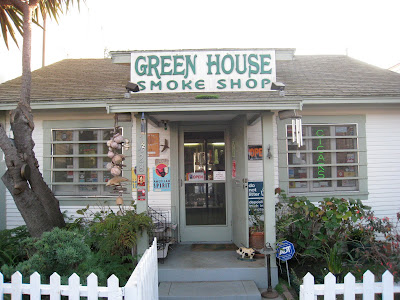 Since then, they've been a crucial presence on the Boulevard, both for smokers to find EVERYTHING they need there (Seriously. Everything. Tobacco - domestic and international, cigars, cigarettes, all kinds of papers, ashtrays, water pipes (created by local glass blowers), pipe pipes, vaporizers, lighters, filters, incense, not sure about gum ... but you see what I mean), but also as active members of the Venice community.

You can see by the postcards sent from friends from all over the world, covering the walls and door, that they are well-loved. Or by how the lady that came in when I was sitting there and had no idea I was going to write about The Green House, and said, "You guys always have the best stuff ... the best inventory!" Unsolicited.

Bunny is also knowledgeable deluxe about simply everything having to do with the art/habit of smoking. It's fun to listen to her deal with customers: "Do you have American Spirits?" "Yes. Every single kind." Even the ones soaked in a whiskey barrel (If I smoked, that might be the pack I'd turn to, if I'm honest). She turned a guy on to Nat Sherman's while I was there, which I learned was a company from the 1930's making their own Southern smokes since then, never with additives or pesticides. See? She knows her stuff. 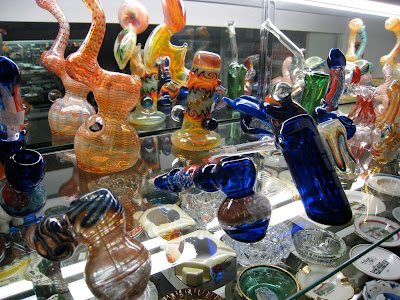 Venice is very important to Bunny and Sandor, as I've mentioned. They met here, had their uncommonly great kid, Leaf, here, and live right off the Boardwalk, so work and home are both smack dab in the hearts of it all. When talking about Venice, and what it means to us (which is interesting to do between long-time friends ... you just don't often pause to talk about core stuff amid the current events ...), we both agreed that never mind the higher-brow stores moving in to AK Blvd., etc ... the core value of Venice remains intact. In fact, it may even be getting stronger, as passionate and active friendships remain, and grow stronger, thus more powerful as a citizenship together. Bunny can feel comfortable with Leaf talking to some random grown-up cruising by, because he most likely has known them since he was in utero. Things can actually get done at City Council meetings and Abbot Kinney Association things, because there are active and vocal members like Bunny and Sandor. Local artists and businesses are supported first and foremost. And those kinds of things matter a lot in the ethos of a place. 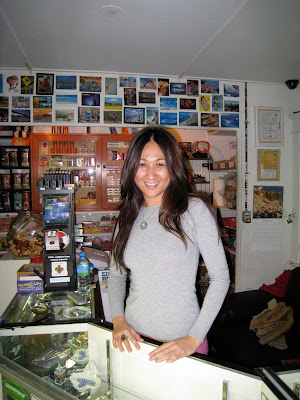 As do things like RESPECT - for life, nature, oceans, politics, and community. That seems to be the most common denominator for the friends and neighbors we know, or want to know. There is a support for creativity here that we find, really, unparalleled. And so we stay. We get involved. We patronize the locals. We respect each other. Or do our very darndest to.

And many also smoke. As the bell on the door to The Green House rang signaling the umpteenth customer of the afternoon, a nice, older lady came in. She kept glancing nervously outside at her dog, until Bunny said, "Bring in your dog. This IS Venice, after all."


As their Best Business Card In Venice says: