My Brush With A Superstar.

RaRa Superstar is as Venice as it gets. He is an artist and drummer who plies his trade/s on The Venice Boardwalk, and around the world. We've been friends for a long time, but I never really knew his whole story until we sat down together yesterday in the golden afternoon, watching humanity go by together in front of his booth on The Boardwalk.

Ra was born in Oceanside, California but didn't stay there long. His was a military childhood, so he grew up all over the place ... Detroit, Cleveland, New York ... ("I grew up in 30 of the 50 States, but those were the ones I liked."), trying to figure out where he belonged all along.

Then one day "Circumstances led me to live under the Brooklyn Bridge", where all he had was a drum his brother had given him. He said he didn't know how to play it, but he learned quick - in a week - to throw down beats enough to eat. He was inspired by the kindnesses he was shown by passersby, commuters, fellow bridge dwellers - everyone would bring him food, smoke him out, share what extra they had - to where he realized that things weren't so bad, and that he was actually incredibly blessed. When one man that he saw a lot named Pep invited him to his apartment to hang out one night, Ra was dazzled by the paintings all over the walls of the place - jungles vines climbing, nudes everywhere ... mind blowing stuff. It was then (as up 'til then his form of expression - mostly to get girls - was poetry) that Ra decided to be a painter.

By then Ra had a daughter, Essence, and he was in Detroit with her when he hit the lottery. They took the money and bought art supplies, and Ra and Essence made his first painting together. Ra's name used to be 7 Guess, when he was doing rap, and after a bunch of soul searching, he realized that he wanted to be about the Sun and positivity, and changed his name to RaRa Superstar for his new phase as an Artist. (I still don't know his real name, and I kind of don't want to - the guy clearly IS Ra Superstar, and that's that. I didn't even ask.) It took him a while to get up the nerve to try to SELL his painting though, so he still did other things to get by. 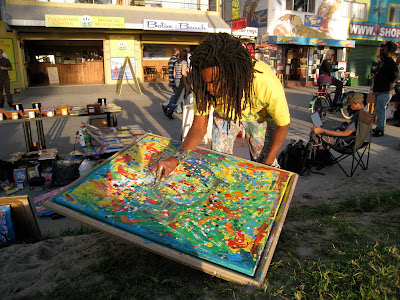 Mostly, Ra played his drum and did astrology for people. He traveled city to city doing that ... meeting people, making enough money to get to the next place, and occasionally hitting the lottery right when he most needed to. He has a LOT of good karma. His first day back in New York, he met a guy who came right up to him and said, "YOU belong in Venice Beach." That seed planted, it didn't take long before Ra made his way West. His first day in Venice Beach, he saw that same guy from New York! "I made it, Man!", he yelled as they greeted each other incredulously. That was a good omen - and he's been here ever since.

Still doing drumming and astrology to get by, Ra had a hard time on The Boardwalk initially, as wherever he would set up his drum, someone with more seniority would be drumming right there and tell him to move. Same with astrology, until he kept getting moved down all the way to Brooks. He was working on his paintings all along - going through phases: Egyptian symbols, an all yellow and green phase, Venus and The Sun ... (now his son, Ra, had come along - from an Italian woman he'd met on The Boardwalk - and was the inspiration for the Venus phase), but still hadn't worked up the courage to put them out for sale yet. He was selling faux-Egyptian artifacts until his display fell over and they all broke and he pretty much HAD to start selling his paintings to be able to survive. 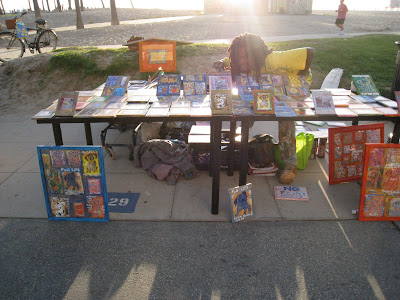 When he began selling them at the beach was when he began doing painting that incorporated his poetry and words into them. He started painting the frames when he had some that were all tore-up looking, and he thought he'd try and make them look better by carrying the painting over onto the frames. That's when they started to sell. That was 1999, and he's been down there earning a living off his positivity and colors from that day forward. Whenever people started copying him (and they do), he'd shake it up and try something new. He began doing smaller pieces on plain wood ... and then everyone down there started doing that, so now it's on to BIGGER pieces on wood. I commented that it seemed to follow the economy doing it that way, and Ra said there's a lot you can tell about the state of humanity being out there every day. Total anthropology. Ra said you can tell the time of year it is by just watching the people go by - oh, the French are on vacation, or kids are out of school, or these guys are here for the Rose Bowl, on and on. 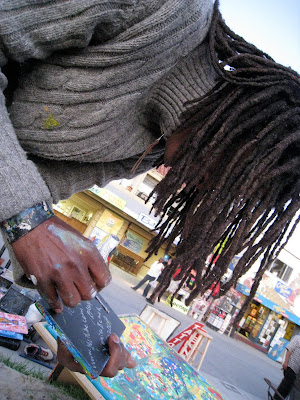 With so much life and diversity going by every day, it's reflected in Ra's art, lifestyle, and even offspring. His newest baby, Princess, was born to him by his current girlfriend, who comes from Japan. And whom he also met when she was walking by his Boardwalk booth. It's no wonder then, that when asked what he loves most about life in Venice, he says simply, "The Boardwalk." He is OF The Boardwalk, and appreciates it all day, every day. Especially when in far off places, like his upcoming show in Amsterdam, followed by another in Sweden (where his "Absolut Venice Beach" piece is sure to be a hit with the Absolut Distillery). His YouTube Channel, "Superstar TV", takes you along on his adventures across the globe. That's a good place to send him messages too, and get in touch with him about the piece you'd like brightening up your place - if you can't make it to The Boardwalk yourself, that is. 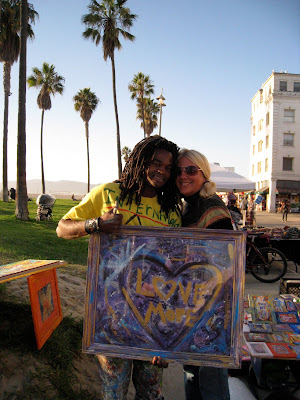 Ra's art reflects the love he has for life, more than anything. In fact, he calls it the "Love More Movement". And who can't get behind that? His upcoming Amsterdam show's theme is "Life Is Beautiful, Just Add Color". In fact, he sweetly presented me with a piece that says exactly that on it ... and will serve to remind me of that truth, and also of its creator.

RaRa Superstar himself adds such vibrant color to Venice. His kindness, uplift, and enthusiasm for expression and people, confirm every time you see him (or his art) that life is indeed BEAUTIFUL.
Posted by CJ Gronner at 2:06 PM