A bunch of Venice friends made the somewhat rare trek far past Lincoln last Saturday to celebrate our friend Hilary's birthday with some ice skating at the newly opened (for the Season) Pershing Square Outdoor Skating Rink. Yeah, there's a closer one in Santa Monica, but that one is really crowded and pretty slushy, and downtown you get that pseudo-Rockefeller Plaza feeling going skating amid the skyscrapers and lights. The main difference is that the trees are Palm, not Pine - and the skill level among Southern California skaters is probably not that of East Coast kids raised on ice skating. 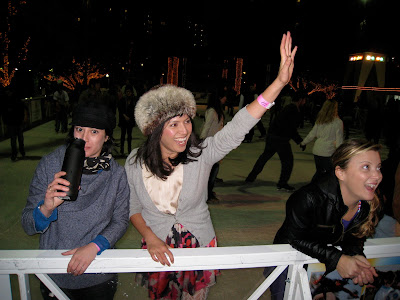 Never mind MINNESOTA kids raised on ice skating! Saturday night was monumental in that our little 1 1/2 year old friend, Quinn, had his first time on skates ever! As his Dad is a Minnesotan too, this was a big, big deal. See how he takes right to it! With a jaunty wave to his fans, even!

His Auntie CJ tried to show him a thing or two before she completely ate it, swerving to avoid a clutch of kids clinging to the side boards. 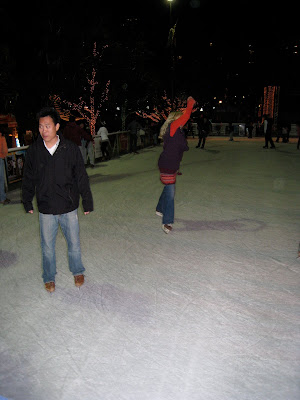 It's a surreal field trip to ice skate in the balmy (compared to any other outdoor skating rink around the country) evening, and really did help to get us in that almost the Holidays spirit.

Slick ice is a great equalizer, and it's a good time to even just sit and watch the folks try to stay upright. My favorite is the big guys just terrified and clinging to the edge boards, as their dates laugh and cling to them. One of my friends asked if it was sick that she rather enjoyed watching people fall on their faces. No, it is not. It's just being human. It's a cheap date too - only $6 per session (one hour sessions go from 12-10 pm on weekdays, and 10 am - 10 pm on the weekends), with $2 skate rental fee if you don't have your own.

As the calendar turns toward the Holiday hubbub, treat yourself to a little good old fashioned ice skating ... to remember the child-like fun part of it all.