My Freund, Tom - At The Stronghold.

I wrote about The Stronghold as a music venue back in April of this year for The Beachhead, and wondered how it would turn out. I've seen a fair share of growing pains (mega-disorganization one night when we had a visiting friend scheduled to play ... no bueno) and recent confusion about it all, so last night I just finally asked one of the owners, Michael Cassell, just what exactly the deal was ... what their vision for the place is, because it's a really great space, and I'd love to see it do well, especially because - selfishly - it's super close to my pad.

He said that they want it to be all about the music - not about getting hammered (though that could have a lot to do with the fact that they have no liquor license). He said, "People are paying for silence" - meaning that they want it to be a place where people sit and LISTEN to the music, and really appreciate it. Kind of like a McCabe's show. I HOPE that folks will want to pay a cover to just sit and listen to great music in the neighborhood - sans alcohol - but it remains to be seen. The bonus to that is that it can go really late-night, with no booze laws to deal with. And you can always smuggle it in red cups if you've got the shakes or something. Per the management.

So last night was the first time for the no alcohol deal, and it was Tom Freund Tuesday - he's got a residency for every Tuesday this November. I hope you already know him and his music, but if you don't - it's high time you did. I was at a Steve Earle show last month (with Tom Morello and Ben Harper to boot) and I was standing there talking to Tom Freund when this young guy came up and just fawned over him like those other legends weren't even there. "I can't believe I'm at this show and I just met my favorite singer-songwriter!", he rejoiced. It was darling, and so nice to hear, as Tom throws down with the very, VERY best of them.

The Stronghold (the music space is upstairs from the custom jeans part downstairs - you can hear the industrial sewing machine whirring long into the night) is really a lovely interior, all wood floors and big iron spiral staircase loft looking, with leather couches and chairs set up around the stage area. It's downright cozy ... and if it gets too much so, there's a gigantic back patio where you can go get fresh air or pollute it. Coffee and water are on offer, as well as a little selection of snacks. Total McCabe's. Or a Speakeasy.

I chatted with Tom a little bit backstage before the show, as though we've been homies for a long time, you don't often get the chance to dig deeper at shows and whatnot. He settled down in Venice because he's a New Yorker, and if you're moving to California, you'd better be near the ocean, is how he put it. I totally agree. He has a gorgeous wife, Francie, and a stunning little redheaded daughter called Delilah. They are part of a community of great hipster parents in Venice, which is one of the things he likes most about where we live ... people helping out and creating that nurturing vibe for everyone involved. The Ocean is a crucial part of life for the Freunds, as is the walk and bike-ability of how we get around in these parts. You'll see them hanging out all over town, but Tom said, "I'm an Abbot's guy by nature", meaning Abbot's Habit. That's about the people. If it's about the coffee, he'd take a cappuccino from The French Market, thanks. (Amen). It doesn't hurt that musicians of the highest caliber are friends and neighbors, especially when someone is as about the tunes as Tom is.

Amilia K. Spicer and Steve McCormick are a couple of those friends and neighbors, and opened for Tom last night, taking you to down home Kentucky (where she's from) through her beautiful voice and straightforward guitar playing. Steve is a great harmonizer, both with vocals and guitar, and you can tell they really enjoy playing together. I need to go hear her more. Tom joined them on his stand-up bass for her last song, "Harlan" about the town in Kentucky where she's from - or as she put it, "this is a song about my DNA." It was so lovely with the three of them creating a whiskey soaked visit down home on that stage, that Harlan is now on my list of places to check out.

Tom Tuesdays are the best, and you never know who is going to show up to join him. Last night he was backed up by Matt Pszonak (on lap steel and bass), wonderful percussionist/drummer, Chris Lovejoy, and Jason Yates on keyboards (Jason of The Innocent Criminals). Jason played a few songs of his own to get us further warmed up, and then Tom took the stage for the intimate crowd (that grew less so with each song ... people were still coming in when I left post-Tom!). Tom opened with a song that isn't on any of his albums, "Crow's Landing". Judging from the crowd's reaction, it will probably be on his next one. This night was "Set List Free", Tom said, so with hardly a glance at Lovejoy, they launched into Tom's oldie, but goodie, "Trondheim". I love that one, and not just because I'm Norwegian. And I love the next one, "Bombshell" - and not necessarily because I'm one of those, it's just really good.

Tom's latest album, "Collapsible Plans" is a treasure. Ben Harper produced it (available on his website), and Tom has opened for a bunch of Ben's tour shows. They're longtime friends (and were a college duo together) and their music compliments each other totally. The song, "Collapsible Plans" was next, and the two girls right near me knew every single word - though Tom sang it a lot better. "Unwind" features such fancy finger-work on Tom's guitar, you can't even see his hands, they're such a blur. Funky Wah-Wah sounds permeate the mix, and the hoots and hollers at song's end were well-deserved.

Ah, good old "Copper Road". Tom would have fit in great with the whole desert-rock Gram Parsons times, that's for sure. In fact, he played Parsons' "Hickory Wind", joined by Amilia K., and the country yearning is almost painfully pretty, filigreed with Tom's masterful mandolin work. "Queen Of The Desert" fit that genre as well, and the mandolin ... That mandolin. Sigh. The real show-stopper for the mandolin is Tom's song about his wife, "Francie". PLUGGED IN mandolin madness, that again makes one pause to wonder how human fingers can fly so fast. It's a classic in the Freund ouevre, for very good reason. I'm humming it now. 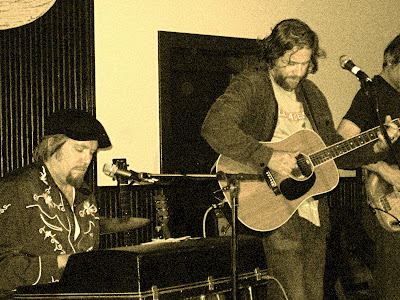 But then Tom would also fit in great in any smoky jazz bar across the globe. "Comfortable In Your Arms" features his stand-up bass played with a bow, which he glides masterfully. "I want lessons", was all I was thinking while listening to that thing. Glorious. That was followed up by the Beatles' "Come Together" and then I thought, "Exactly. That is really the whole point. Of music. Of love. Of Community." ... I snapped out of that revelation just in time to whistle for the ripper of a bass solo on that one. Geez Louise.

"Me and Julio Down By The Schoolyard" is always a crowd-pleaser, with Jason Yates and Lovejoy leading the sing and clap-along. A word about Lovejoy: he just rules. He's so inventive with his little bag of percussion tricks, and such a joy to watch, with his crazy hair and big smile he gets from playing ... he's a real treat to yell and clap for.

"Why, Wyoming" took us back out on the road, with Amilia K. again lending her harmonic gifts. Because there is really no time limit as it stands now at The Stronghold, Tom could play as long as he felt like. Even on a Tuesday school night, that was fine by the entire room. "I Get By With A Little Help From My Friends" is always a good thing to remember and celebrate, and when the version is done all slowed down and fresh like Tom did it (joined by Shannon Moore), it's even better. Even BETTER when you get Stanley "The Baron" Behrens to join you, blowing on his harmonica like the bluesiest cat around. When Tom and I were talking pre-show, he said there are two great harmonica players on the planet - Taj Mahal and Stanley Behrens. Seriously. It was so great to see Stan play last night too, as he's been dealing with the dread liver cancer, and its horrid treatments. He's on the list to get a transplant soon, but you would know none of this by watching him play. The LIFE he breathes out through his harp is so powerful, you really do trust that this guy can handle anything that comes his way. Once again, the power of music to heal and elate was clearly evident. GO STANLEY!!!

"Digs" was groovy as ever, and had heads bobbing in unison around the room. "If you don't like the digs, you can find someplace else." Word. Buffalo Springfield's "For What It's Worth" was also given a jazzy treatment, and featured a drum jamboree between Lovejoy (I love that name) and Jason Yates on congas. "Stop, Hey, What's that sound?" ... that sound is fresh live music in our own backyard!!! 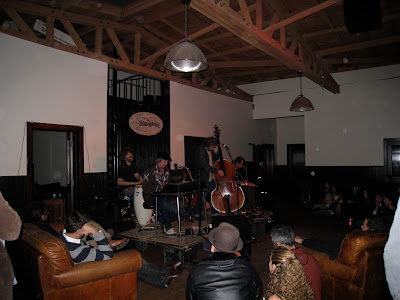 The last song of Tom's official set (I left, but heard it still going on up there as I went by later) was his excellent (said like Bill & Ted) "Truly Mellow". It takes you back to the time when you were that teen listening to music in the basement ... trying out new sounds, ideas, perhaps herbal remedies ... as you sorted out who you were going to become ... all the while feeling truly mellow. There's a good singalong part that is also easy, just "La-di-dah" repeated back to Tom. This crowd sounded good together too.

Once the applause died down, my crew and I said our goodbyes and ambled down the steps into the night, feeling mellow, feeling lucky, and feeling hopeful that The Stronghold will get it all streamlined and flowing. Live music so close to our homes is just about the best thing ever, so I'm rooting for them. There is a special feeling when you get people together to be just about the music, and in such close quarters. It all goes back to that music, love and community ... and the more opportunities for that, the better.

Tom Tuesdays - one more left in November. Don't be square.
Posted by CJ Gronner at 3:29 PM