A Bi-Coastal Skate Summit! My brother, Paul, and our Brother-Friend, Aaron, met and grew up together skating the mean streets of Minneapolis. Paul moved West (Venice) and Aaron moved East (Brooklyn), and whenever one visits the other, it's still mainly about skateboarding. Aaron even turned a spare room in his last New York apartment into a "Spare Ramp". Yes, a skateboard ramp built in to fit the room. One time I was in NYC and booked a hotel room. Aaron was offended. "Never do that again. You can always stay in the spare ramp. It's good for your back." These guys clearly love their skateboards. 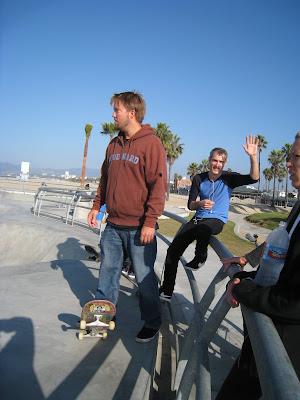 So it was with great anticipation and joy that the two old friends got up early ("to beat the kids") to skate the new Venice Skatepark together. It was like Christmas morning as a kid (if you had a slight hangover then), and the smiles were wide. I quote Aaron, "It's like butter." Everyone thinks so, and everyone loves it. There was even a very attentive guy down there with a big Dust Buster type thing, blowing away any traces of sand in the Bowl, dodging the skaters taking their turns. Everyone seems to be very courteous about that too - it's very civilized the way people observe and respect each other, and the order of runs. I was impressed.

There was one really quite elderly man down there, all padded up and waiting his turn. I was both proud of him, and a bit worried - it's not really the sport to take up in older age. Paul finished a run and said, "I feel like an old man." You would not know that to look at him here: 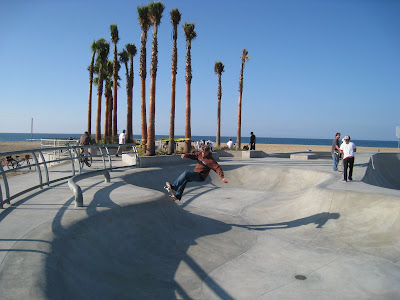 Still wrecking it! Aaron's style is very smooth, like surfing, and almost too quick to capture. 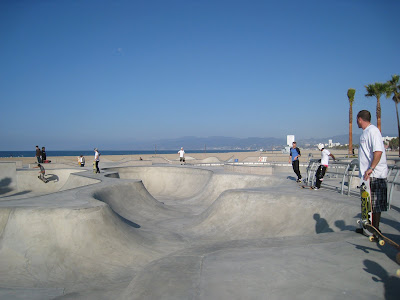 It warmed my heart to see these two old friends out there on a glorious Venice morning in early-November. After all the years of skating outside in winter slush, taking the guff of jock dudes that were threatened somehow by skaters, and being harassed by the Cops, Paul and Aaron had their reward this morning ... and are still out there now. 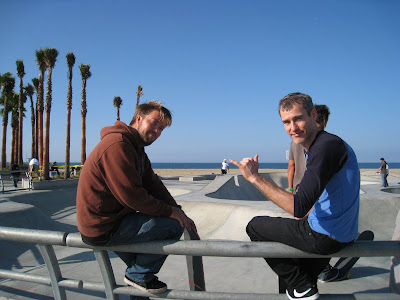 Well ... whether this is bad or not is controversial, but it's been eating at me since this time yesterday, and my friend Steph said, "You need to write about this and get it out of your system." So I am.

I was sailing across Abbot Kinney on Venice Boulevard yesterday on my bike, hair blow-drying in the wind and sunshine, dressed in my Technicolor Tunic, smiling and waving at a friend who had honked as they drove past. Not an antagonist figure in the least. More like Happy Venice Poster Child. And I WAS Happy Venice in my mind too, looking forward to a sunny lunch with Jen at Casa Linda ... Blessed.

I curved past this woman on her bike, (Mom's age-ish, in a bike helmet) and as I swept past her, she yelled at me, "HAVE A NICE BRAIN INJURY!" I DID almost crash my bike hearing that. I think she just wanted her 2 cents heard as someone flew by, and didn't count on me slamming on my brakes, turning to her, and saying, "What did you just say?" She smiled this strange smile and said, "I said have a nice brain injury. Enjoy your cracked skull." I was so taken aback, I just looked at her for a second, and then said, "That's not a very nice thing to say." She replied, "Well, what nice way would you like me to tell you that you're going to die? Falling on your head on concrete from three feet up is absolute death, and you're higher than three feet on that bike."

Again, Wow. "Did you get a brain injury or something?", I asked, wondering why she was on such a crusade with a total stranger. "No, because I wear a helmet.", she answered snippily. "Well, there's probably a better way to say this to someone.", was all I could come up with to say, as I was torn between wanting to push her over and hoping this wasn't some Omen Lady sent to warn me against imminent paraplegia. She just shrugged at me, and smiled oddly again. I was done with her, so said, "Thanks for the advice, I'll look into it {No, I won't}." She gave me two thumbs up and said, "Good Girl!", like I was a little retarded already.

I rode off, but fumed about it a couple more blocks and spilled it all to Jenny, and we both think she was super out of line, and freaky for even putting that negative energy out there on me. We're kids of the 70's, Man. I get it about helmets and pads and everything, but I've made it this far, and I really don't see myself pedaling along The Boardwalk in a helmet anytime soon. So ... was it bad? Was it good? Was it none of her business? I'm leaning towards the latter. I'll ask the expert on me, my safety, and moral manners ... Mom?

I was unable to attend the Venice Neighborhood Council meeting last night on Medical Marajuana and the Dispensaries around town, but Jim from the Farmer's Market, and Jenny from the Block went and said it was a great meeting, all in favor of legalization and regulation. Everyone was super informed and had data to back up their comments and concerns ... and nothing was really decided. Stay tuned for more on this when I can listen in for myself. But be encouraged that California may soon solve many of its problems (Economic, Prison overcrowding, Buzz-killing ...) through the simple and obvious act of legalization. This is a historic time in our state, and once more California finds itself on the leading edge of stuff that just makes sense (except for Prop. 8 ... but we'll get it next time!).