I think it's the best when you meet people and become friends, and have no idea what they do in life or anything, you just like them for themselves ... and THEN you find out that they're in a great band or they do amazing paintings or are roller derby girls or work with handicapped kids, and you like them even more.

That's how it was when I met the guys from the Australian band, WIM, at my friend Vav's birthday party last week. They said they were over here to record their album with this hotshot producer guy, and were having a grand old time here in the States, and then we went about our business of having a blast at the party. While chatting with a couple of the guys, I asked who they would see themselves on a bill with, to try and get an idea of what their sound was like, or whose music they like, as I always think that's pretty telling. When they said, "David Bowie and Nina Simone", I knew that I was going to dig what they were up to ... I just didn't know how much.

So last night - after a little (er, LOT) Paqui Tequila at Patio Culture's tasting party - I found myself walking across the street to The Stronghold for the second night in a row to see our WIM guys play a show. We actually had so much tequila that their new no alcohol policy was not an issue in the least, and we were ready for a rowdy night of music, surrounded by our whole gang of friends, old and new. There were a whole bunch of people on the bill last night, and WIM had just been squeezed on at the last moment, so they were to go last/late. Which was a good thing, as they were the clear Headliners of the night. 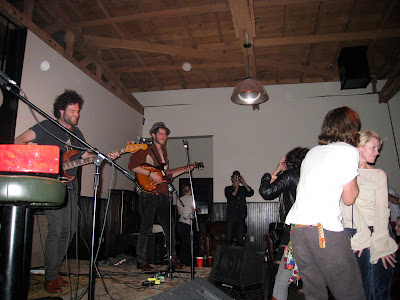 Their Myspace page says that their influences are "The Middle Ages, The Wheel, and Glitter", and as much as that doesn't tell you, it also lends you some clues. Their sound is kind of 70's Brit Pop, but also very much of the NOW. This was their first time playing in America, and you could see on their faces that they were loving every minute of it. Simon Jankelson, the keyboard wonder, said, "We're absolutely charmed to be here", which absolutely charmed all of us. Their song, "America" has a line that goes, "I've thrown all my troubles away", and that's exactly how it felt if you looked around the room at everyone dancing and having a ball, thrilled to be among the first over here to discover a band that you can already tell is going to win lots and lots of fans. Especially girl ones. Every single guy in the band is adorable, and sweet as pie.

Martin Solomon is a classic front man, stalking around the stage and belting out the hits in his resonant voice that doesn't really remind me of anyone else too much - a good thing. He danced around and sat down with people in the crowd and made the whole room get a crush on him. 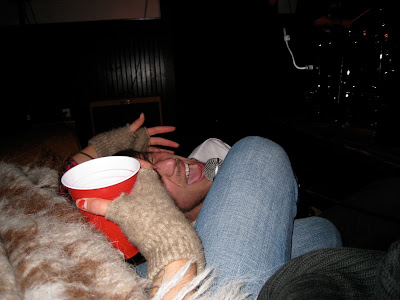 Saul Wodak plays the guitar, Dustin Bookatz plucks the bass, and Harry Thynne holds down the beat on drums, all while obviously loving it and having a blast playing together. "John" and "Something For You" (probably the hit single, poppy, harmonic and catchy as it is) were my favorites, but every song was good, and that's not always easy to say. Everyone at The Stronghold LOVED them, and it was one of those great nights where the feeling for everyone is mutual. The WIM guys all gushed about how L.A. was a "Magical place ... ", and what a great time they've had, so I feel pretty good about your chances to see them play again over here soon. Plus they're going to have to tour behind that newly recorded album that we've all now super-pre-ordered. 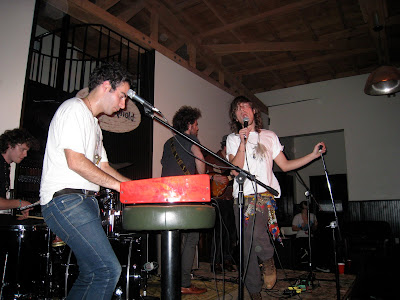 WIM for sure has a whole crowd of new fans this morning. They left to conquer New York today, so we all hugged our goodbyes after the show, and I promised to brag about them to everyone I know. So here I am. Bragging. We loved WIM, their music, and that feeling they gave us last night - the one where music brings everyone together to have fun and CELEBRATE life. 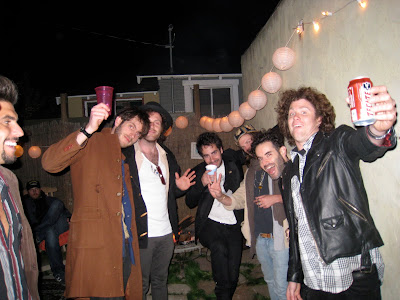 Thanks, Guys. We can't wait until next time!

*Check out the kind words the L.A. Times Music Blog threw out for WIM:
Posted by CJ Gronner at 3:25 PM