Minneapolis Burning - George Floyd Will Not Be Forgotten


My hometown is burning, and, frankly ... it should be. The murder of George Floyd in broad daylight while being filmed was enough for anyplace to self-combust, and no one can be blamed for reacting to the violence with outrage and heartbreak. 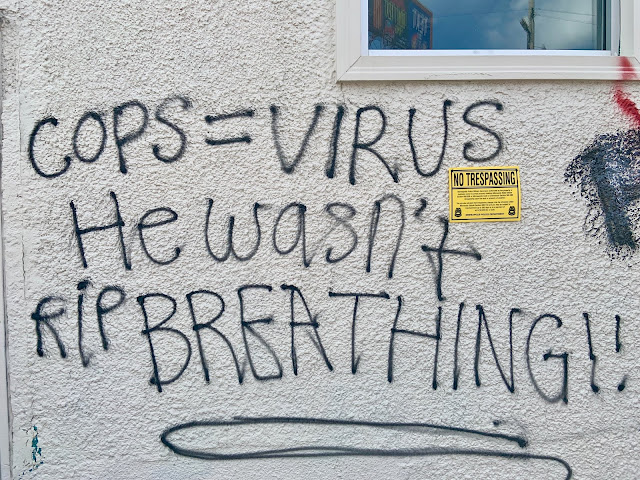 I've been in tears since I first saw the video, and after waking up this morning to the news of the city being burned alive and looted, I was so crushed that I had to go be among the people. I didn't feel like I could participate in the protest last night, because after seeing images of tear gas (which I've experienced and isn't fun) and rubber bullets nearly killing more people, I reluctantly stayed home. I'm the caregiver for my Mom and brother right now, and if something happened to me, I don't know what they'd do, so I stayed put in front of the television watching the mayhem in real time. And then I got up this morning and went to pay my respects to Mr. Floyd at the site of his murder at 38th and Chicago. 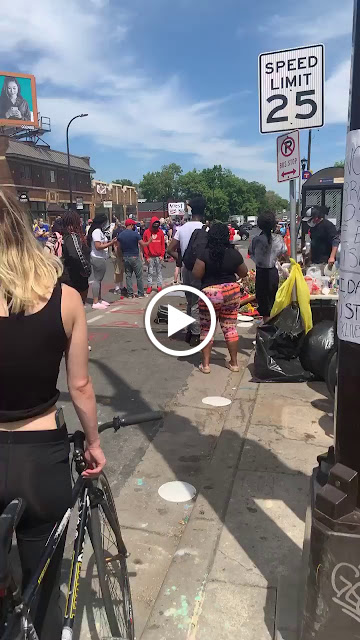 The intersection isn't officially blocked off, but it is blocked by the throngs of people also needing to be there in solidarity. Music was being blasted, a barbeque was taking shape on one corner, the streets were filled with written messages in tribute to Floyd, and the overall atmosphere was both charged and peaceful at the same time. 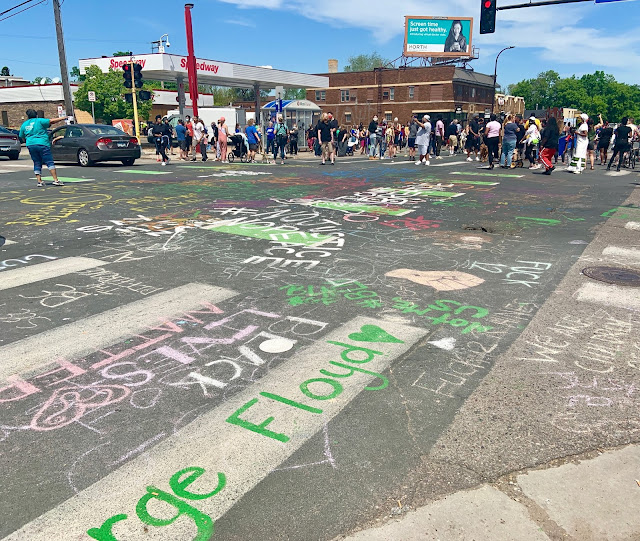 I got chills the moment I saw the gathering, and as I approached the memorial itself, involuntary tears began streaming down my face. I can't believe this happened here ... but I also can. I was alone, and felt sort of conflicted. Was my presence there invasive to the black community who were mourning and hurting? That was answered fairly quickly, as an older black woman near me saw my teary eyes above my pandemic mask and said, "I'd hug you if I could". I told her I would too, and it was a beautiful moment of human beings united in their sadness - and their hope. Hope that by coming together in the name of love, there will actually be justice this time. And an end to the senseless killing of people of color that has haunted this land since its origin. I began to feel like maybe it was important that someone that looks like me was there with them all, in total solidarity. I've already made all the calls to government officials and the D.A. of Minneapolis, I've sent the emails, I've signed the petitions, I've shared the outraged posts ... but I needed to be there to SHOW that people really, really care. 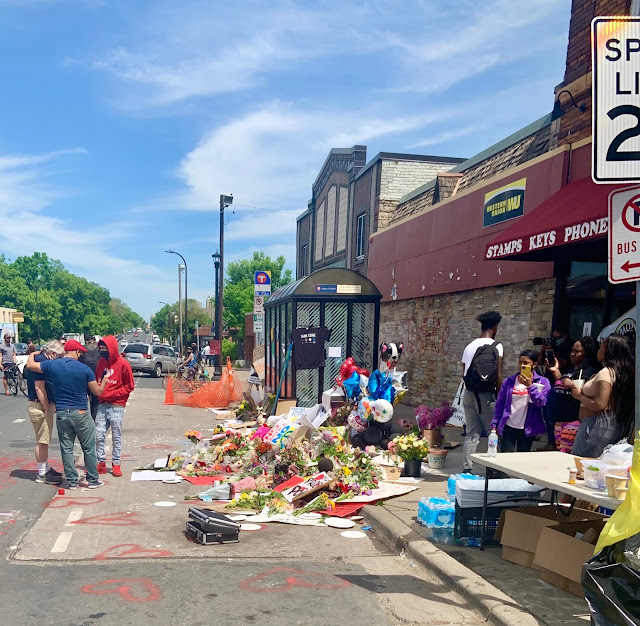 A mural of Mr. Floyd was taking shape on the side of Cup Foods where the murder happened, and I anticipate that this will long be a gathering site for people to come together to mourn Floyd, and an important location in the struggle for civil rights that continues long after the South lost the Civil War. Leaders in the fight for equality for ALL will be leading vigils and protests later today, people like Jesse Jackson and Al Sharpton, and I don't know why, but something feels different this time. Like the People have had absolutely enough, and will not sit by and watch the memory of this blatant murder fade away. At least I hope so. (And the L.A. protests in solidarity were very much appreciated - miss and love you!) 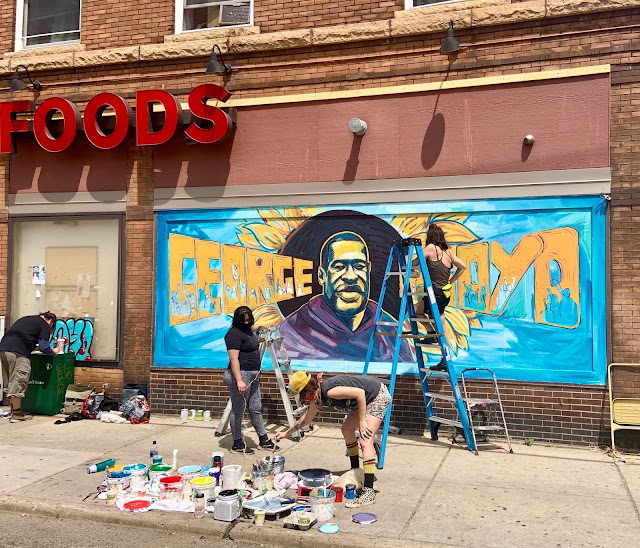 All four murderers MUST be charged and convicted. If that doesn't happen, the City of Minneapolis should expect the unrest to continue - and it would be fully justified. This country is suffering from two viruses - Covid-19 and Systemic Racism. Both must be entirely eradicated if there is ever to be a sense of peace and normalcy in this nation again. I don't know exactly how we're going to get there, I just know that we must. And I vow personally to do whatever in the whole world I can do as an activist and as a fellow human being to help make things better for everyone. 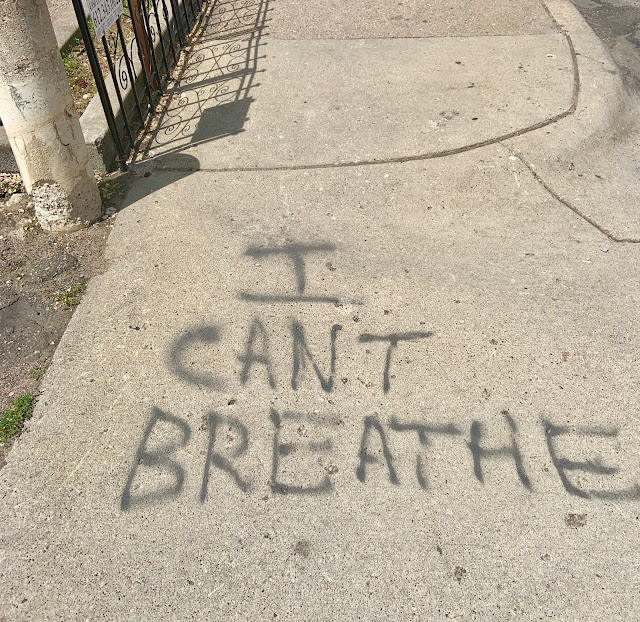 I humbly offer my support and love to all who are hurting so much right now. I am with you, and I know that together we can FORCE things to be better. Because we must. 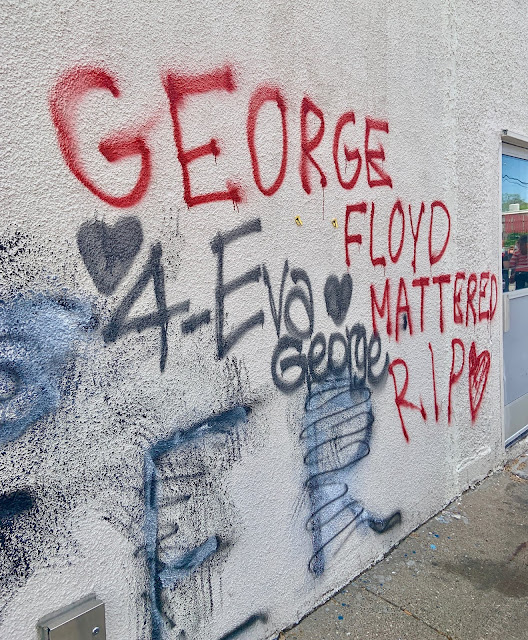 I was going to say No Justice, No Peace - but there MUST be justice. There is no other option. Peace and LOVE to the family and friends of George Floyd, and to the entire world affected by this absolute tragedy. George Floyd - you will never be forgotten. And you just might be the catalyst for change, once and for all. Rest In Peace, Sir.


*Later. Way more fired up. So ... A great thing you can do right now - NOW, while you're feeling something - please call #612-324-4499 and stay on the phone as long as you can, calling every official possible that can do something about getting these dirty cops charged and convicted NOW.  DA Mike Freeman needs to go - start there. There is MORE THAN ENOUGH EVIDENCE, Sir, to arrest and convict all of those murderers right now. We ALL SAW IT. They're trying to err on the side of caution, saying they want to "Get it right". Well, THE only way to get it right is to charge these despicable creatures, and we mean NOW.

You call #612-324-4499. Shaun King's recorded voice answers and instructs you as to what's up. They then connect you, one by one, as long as you can (I made like 50 calls I was so intensely mad/sad/determined) to the offices of various ELECTED officials and Police department heads. I never once got a human on the line, and both disappointingly and encouragingly, many voicemail boxes were full. But, OH, did I leave some doozies for messages. The police ones didn't even let you leave a message, they've been so inundated. Good. Once you finish your tirade, you push the star key, and Mr. King sends you on to the next one - and you just keep on going until you can't take it any more or you hit them all. This time must be different.

I'm both heart-crushingly sad and fully elated to see the solidarity coming to Minneapolis and St. Paul - our beautiful Twin Cities - from around the globe. Like the pandemic, racism and systemic murder have all shown us how very connected in this world we all really are. Thank you especially to Venice, who I'm told marched down the Boardwalk for George Floyd tonight. I'm reverse homesick tonight ... it's so weird to be here in Minneapolis, and not watching it all on t.v. from Venice - but I'm glad I'm here with my hometown people. I think I'm needed more here now. LOVE to absolutely everyone, everywhere. We will make this planet a better place for all if we can once and for all unite for the good of everyone. Call me a hippie (and many of you do), but I'm pretty sure we can do it. Underneath all of the sadness and chaos here tonight ... I feel the real simmering of this melting pot about to boil over into something better.