Minneapolis Rising From The Ashes - Saturday


I woke up Saturday morning with the feeling that I absolutely had to help. All of last week was raging in the aftermath of George Floyd's murder by the police a week ago today. Minneapolis was burning. Everyone felt helpless and scared. I had to go down there to see if I could be of any help. And boy, was I not alone. Lake Street looked like a Chimney Sweep convention, with people of all colors and ages were walking down both sides of the boarded up street carrying their brooms over their shoulders. I started to cry and had chills the instant I walked up the to the street, because I knew right then that Minnesota was going to get through this - and be better for it. 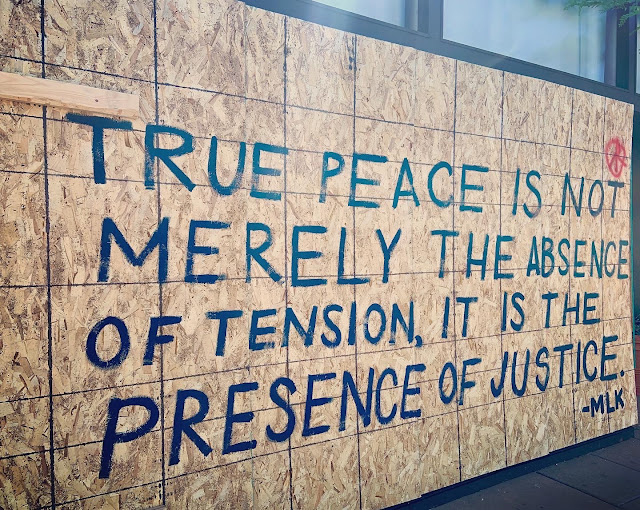 Businesses were boarded up all the way to Richfield, as I drove north to Lake Street down Cedar Avenue. The beautiful thing was that on every single boarded up window were also signs that SUPPORTED the protest, and have joined the struggle for justice and equal rights that is so sorely in need of allies. 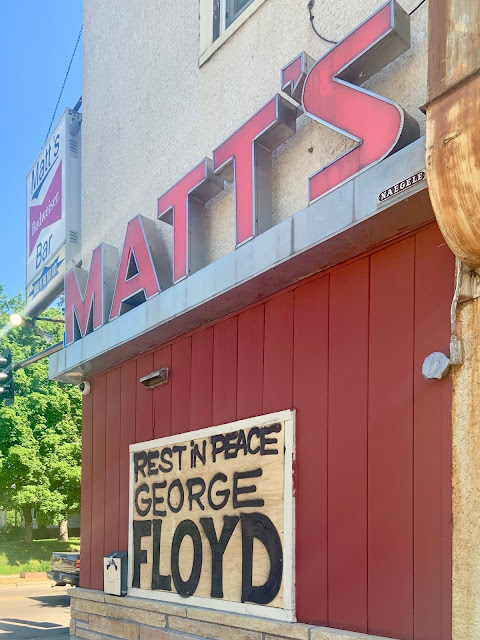 I parked the car, grabbed my broom, and set off down the street. The first thing I saw were the women from the Panaderia San Miguel on the corner of Lake and 17th handing out free pastries that they had bagged up. While their own business struggles, they were out there handing out their wares to anyone who wanted it. Beautiful. 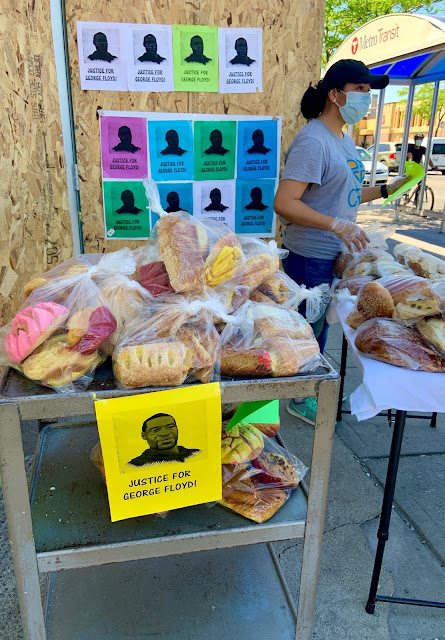 All the stores were boarded up, and one that really hit home for me was our beloved Norwegian (OK, all Scandanavia) store, Ingebretsen's. Their windows had been broken out and were now boarded, but they had a sign saying ONE HUMAN FAMILY, and their total support of justice for Floyd. That is grace itself. And understanding. 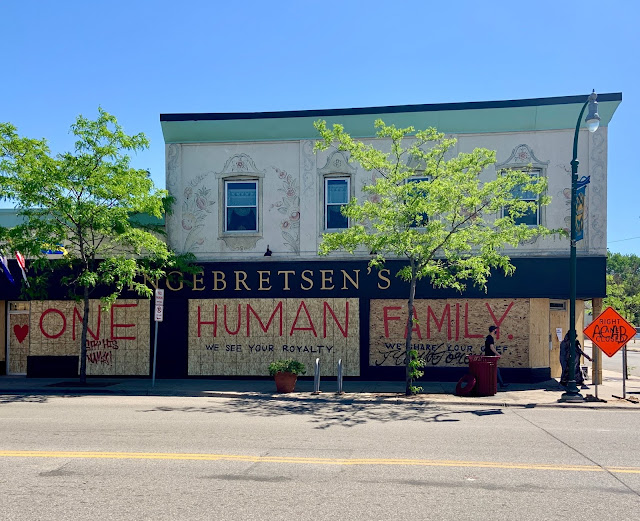 Understanding has been in fairly low supply from many that I've seen on social media (which I should totally avoid, because the trolls have been so bad, and I've been so triggered, but you have to stay on top of things too). Calling peaceful protesters "Rioters" and "Looters", not understanding that people have been driven to this. After hundreds of years of terrible oppression. Voting, calling your government officials, blah blah blah ... nothing has ever produced real change other than the People standing UP, and loudly, for what is right. And that's what we see now happening around the entire GLOBE over this. That's why this time feels different, and that's why it must continue until there IS justice. For EVERYONE. 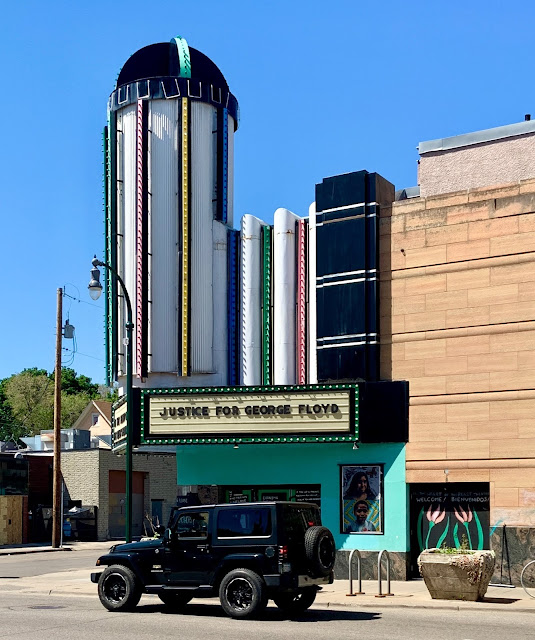 Yes, there have been rioters and looters, but we now know many of them have infiltrated the peaceful process from out of town, and from organized terror groups. Yes, there were also local hoodlums getting in their licks - but I hope you saw how many of those were young white jackasses, looting just because they wanted stuff. That's always going to happen in the way of peaceful protests, but they are still necessary - or nothing changes. 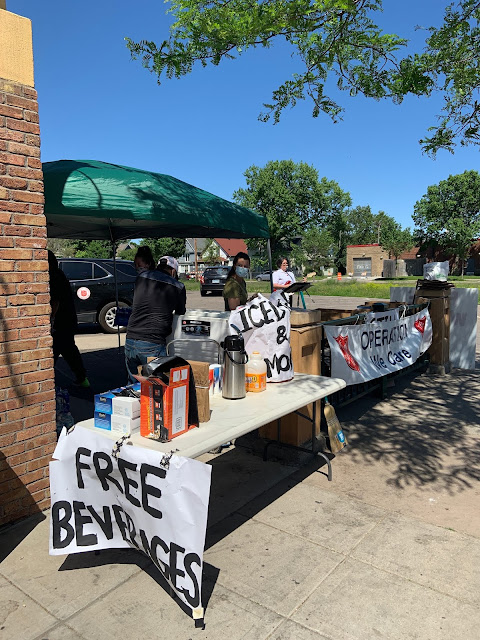 I'm white. I'm blonde, like really white. I think it's very important for people who look like me to be out there too, side by side with our community, showing others - and the media - that it isn't just all angry Black people - it's everyone. If I had been in front of Cup Foods last Monday, I'd like to think I would have tackled murdering Officer Chauvin (no shock that his name is short for chauvinistic. I mean, Central Casting white supremacist pig name!), and forced him to try to do something to the blonde lady on camera. I'm sad that I even have to think like that, but that's truly the way our society has always been. I read an article about how white women should get all snazzed up when we go out to march, and if anyone gets in trouble with the police, to put ourselves between them and the police to make sure everyone sees that. I'm totally down. Systemic racism and murder hurts us all as is now very clear to see. 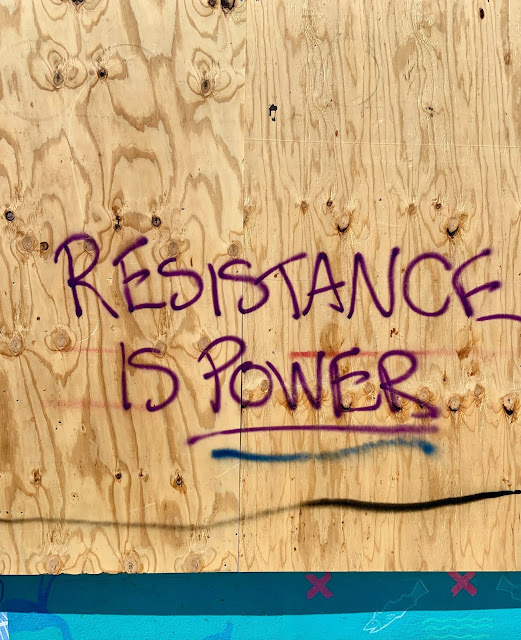 One of the best signs I saw all day was Cops = Virus, I Can't Breathe! Because unchecked police brutality/murder has been going on for far too long, and it really is a global pandemic also. Not that anyone really seemed to care about the pandemic this weekend. Most everyone was wearing masks and gloves, but there were an awful lot of people in close proximity too. We'll have to see. It's pretty impressive that so many came out to help, virus or not. That means something. 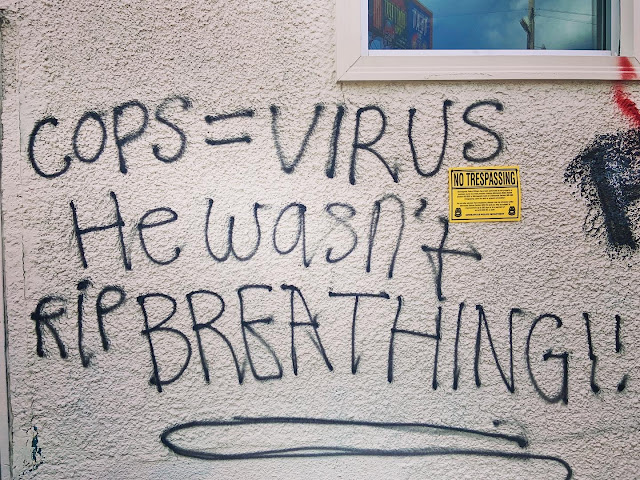 It appeared that everything had already been cleaned up where I was on Lake Street, and was a very upbeat atmosphere, amid some tears too. Live music was going down in the parking lot of The Salvation Army, and a cute little man was there handing out sandwiches to anyone who was hungry. 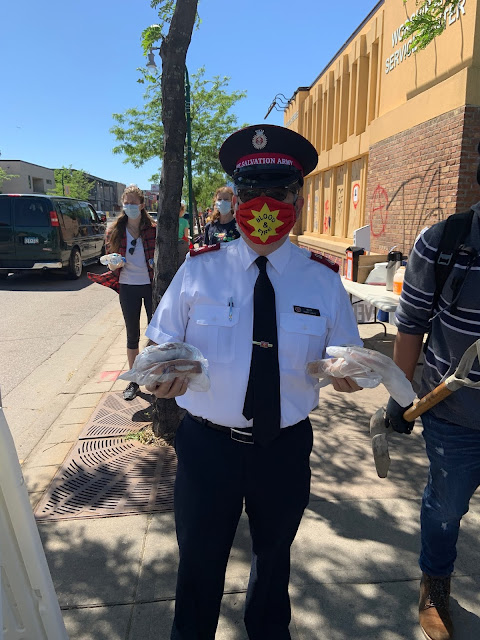 That's the thing. Everywhere you looked, people were helping others. Ladies were in the street, handing out bottles of water to people on their way to help. I asked them where help was still needed, and they told me to keep walking ... I'd see it real easy for myself. 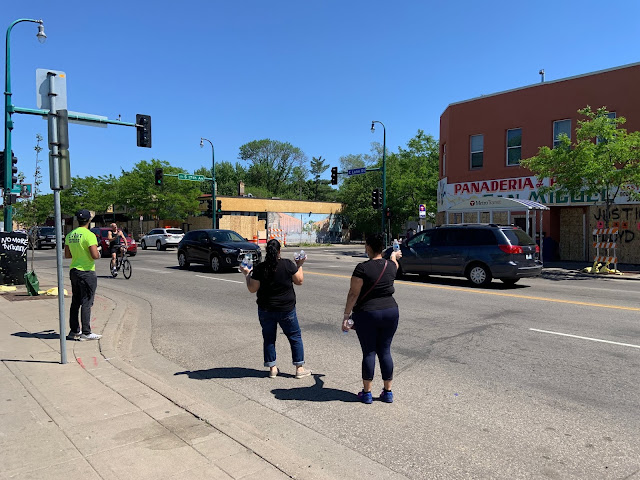 Wheelbarrows full of cleaning supplies from peoples' own homes were making their way down the sidewalks among all the chimney sweeps. Chimney sweeps is accurate too, because a lot of the clean up was ashes. 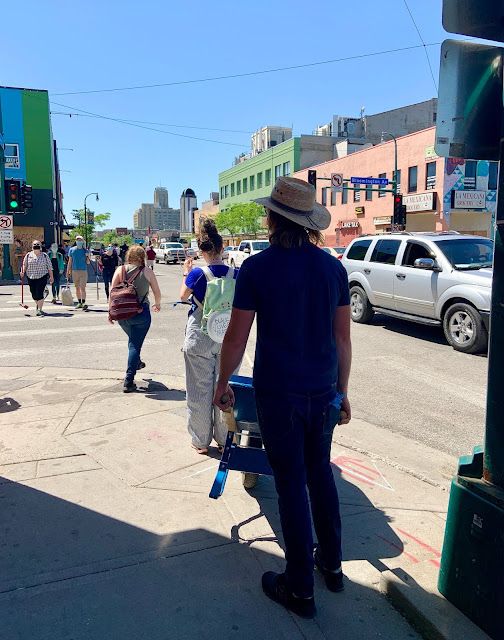 Like at the totally destroyed MPD Third Precinct. Kids were inside the building getting souvenirs as it was still smoldering. They would come out with handcuffs, live rounds of ammo (! - great planning, cops), whatever they could get their hands on. It's not often police abandon their own building and leave it to the people to destroy in their anger. Rightfully, if you ask me. Today, a week later, there are three officers that remain free, and the main murderer is only charged with third degree murder. That's not nearly enough for what we have all seen ad nauseum on our televisions. It's VERY telling that the police had now arrested over 4,000 protesters (I prefer activists), and cities worldwide are being destroyed, and it could all end if they would simply charge all four murderers. But nope. The "Blue Brotherhood" sticks together. As was evidenced by the army of police protecting Chauvin's house the night of the worst rioting, and not caring at all about their own city. It's disgusting. 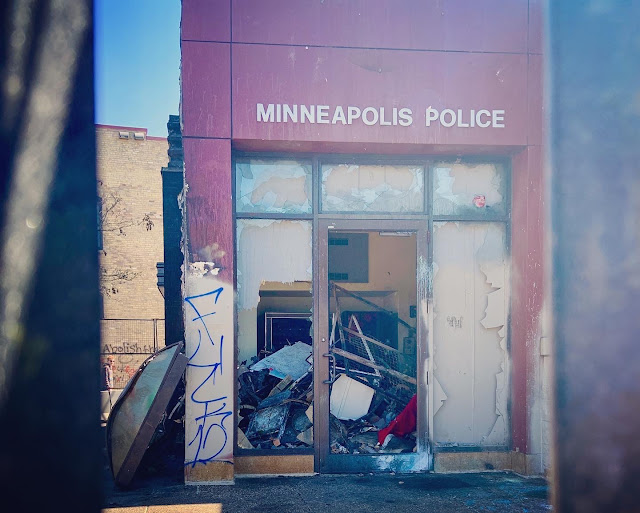 The Auto Zone was completely gone, and we know that was started by a white man, rumored to be a St. Paul police officer. The media skews everything so badly, that people who don't dig deeper don't get all of that. They just knee-jerk react "Oh, more angry black people messing up my commute", and that makes me SO sad. They're just not getting it - because they've never had to. Their privilege allows them to say those kinds of thing with zero empathy, but you KNOW if it was their relative with a knee choking the life out of them, there would be an outrage like you've never seen yet. 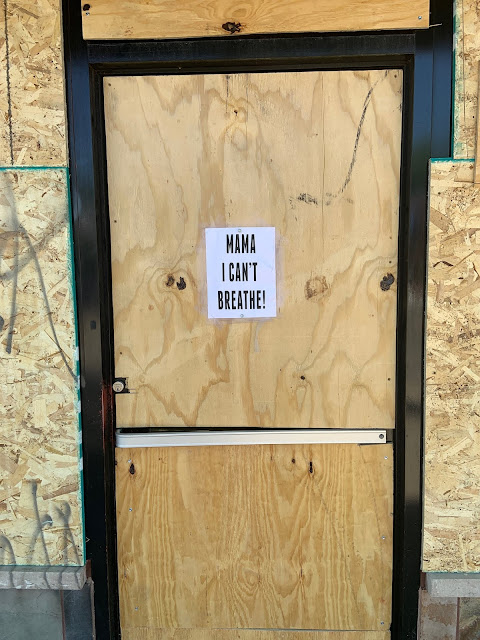 And that's why there IS one now ... because people are finally beginning to understand that we can't live like this anymore as an entire world. At least I sure hope they are. The WHOLE world has never collectively stood up against something like this together before, and that is WONDERFUL to see - whether white commuters see that yet or not. 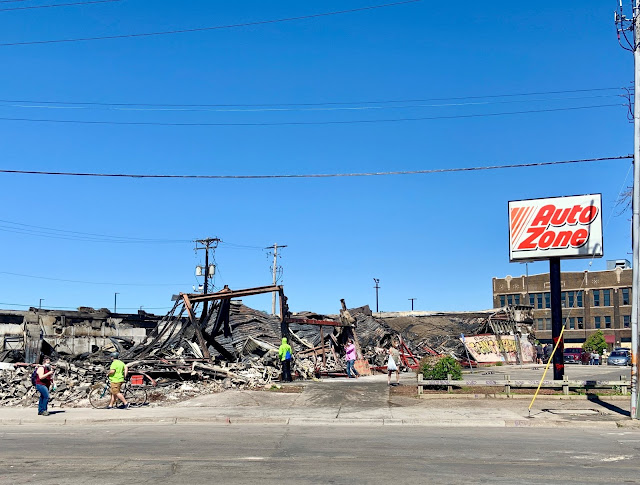 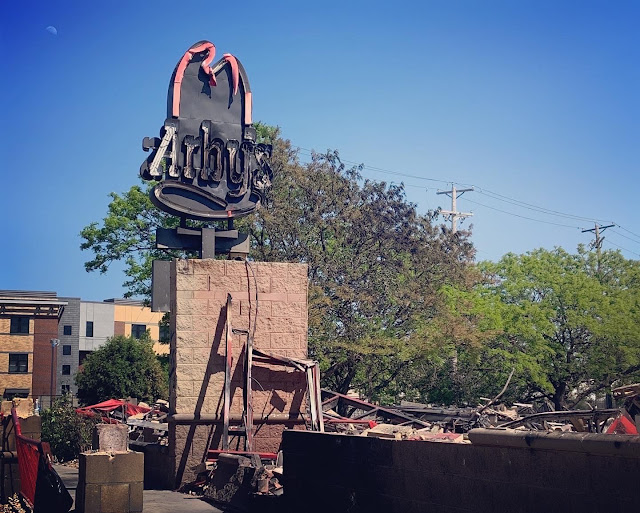 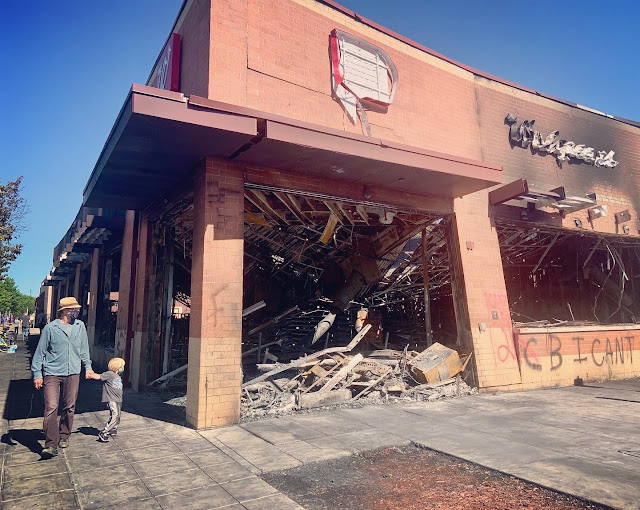 The Hexagon Bar was gone. 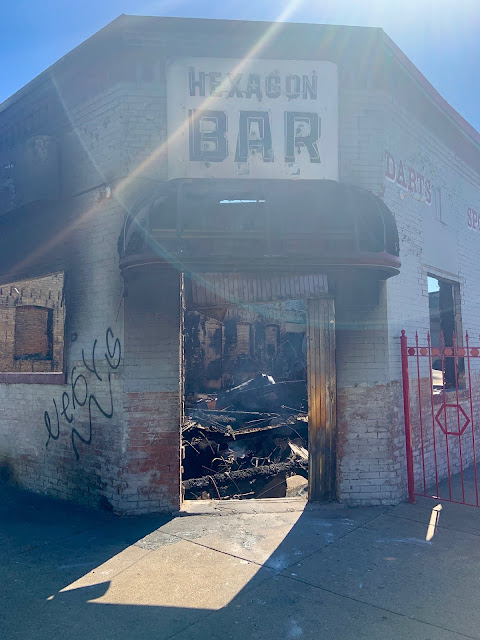 There were huge crowds of helpers, like nothing I've ever seen. I made my way over to the destroyed Target, where the biggest crowds seemed to be. People were sweeping debris and water out of the building and into the parking lot, where more people would sweep that up. A little boy, no more than five, was out there with his gloves on, totally meaning business with his sweeping. It made my heart fully swell. 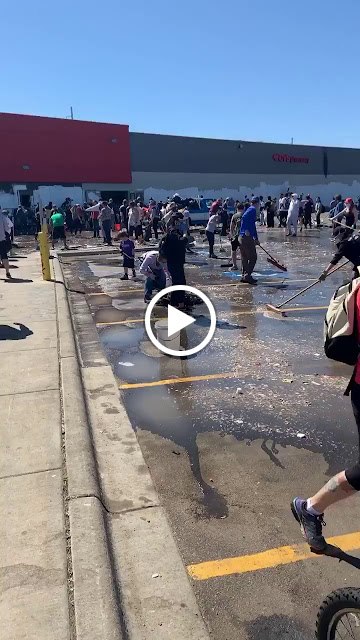 There were organizers letting ten people at a time into Target to help. I didn't go in because it was dark and sad and creepy, but I was happy to be on outside duty. The mood generally seemed pretty high, as I think it meant a lot to everyone there that, well, everyone was there! Helping! 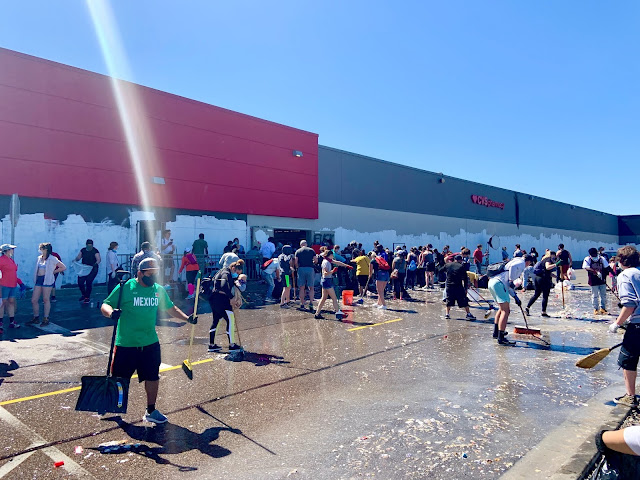 It was one of the most inspiring things I've ever seen, and really did make me feel like not only will this time be different, but better. Now we all KNOW how much most of us really do care, about all of us. That's the only way we're going to be able to go forward, actually, if we all can once and for all realize that everything that happens affects ALL OF US. The Covid-19 virus showed us that first, that one little market in China can - and will - spread around the whole world. And now, one man's murder at the hands of the very people who are meant to protect and serve EVERYONE, has also shown us that the racism pandemic has also spread worldwide, and everyone is fighting against that too. (In fact, it's great that we're already wearing masks - no facial recognition to bust peaceful people with). 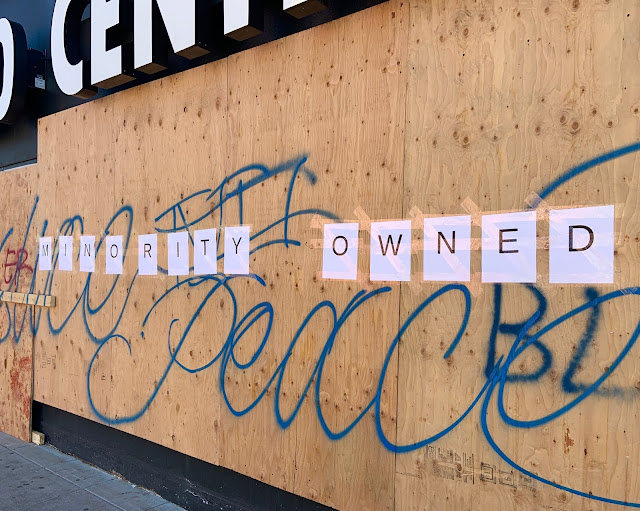 I made my way back home feeling way better about everything. I passed by neighbors meeting in their yards to discuss the strategy for the night ahead (no burning happened, yet police still shot paint bullets at people on their own porches, not realizing still that they are the problem and who we are marching against.) Still, the unity and support I saw was overwhelming, even from people who had their businesses destroyed. They were helping as much if not more than everyone else. They get that material things can be replaced, but human lives cannot. They get that to get to justice, we all might have to sacrifice ... but in the end, it will be so very worth it. 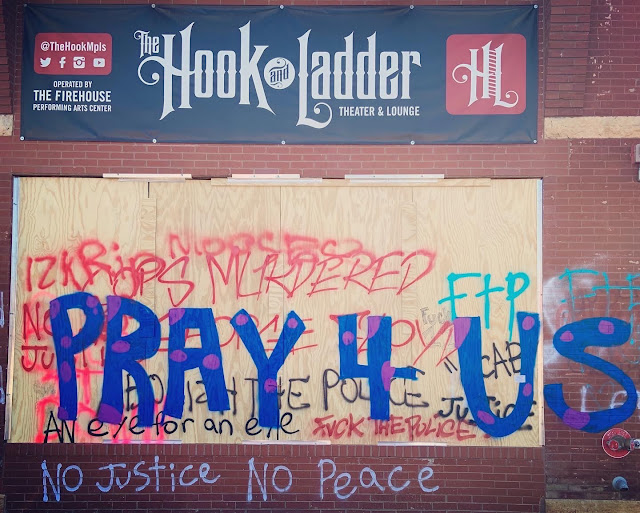 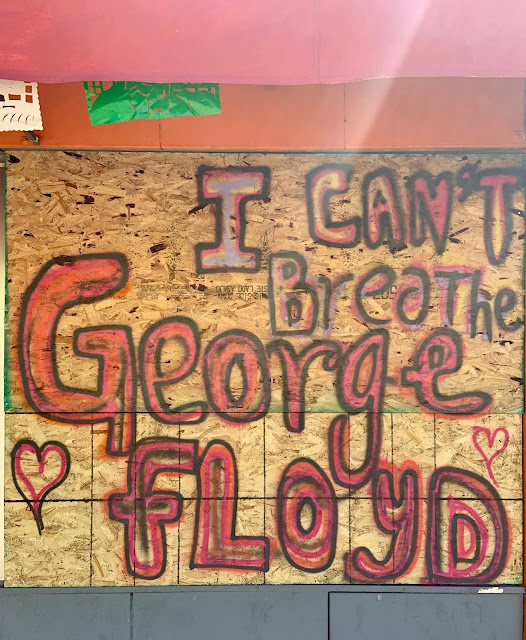 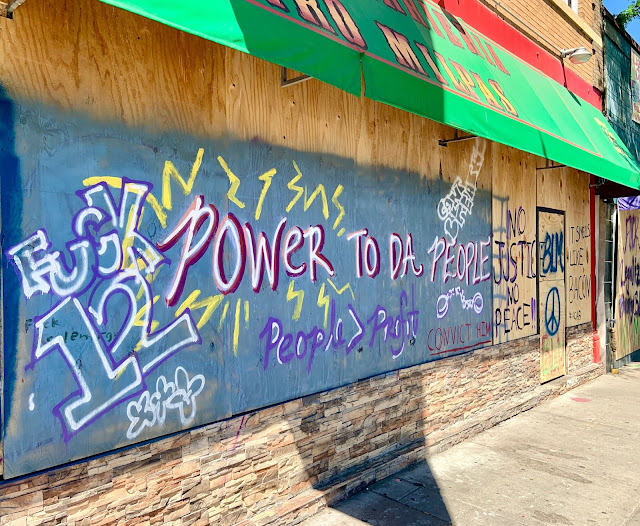 Thank you to everyone who I saw out there helping, supporting, and caring. I encourage those of you who haven't been to give it a try. Being among your fellow citizens side by side in a noble effort to better the world is one of the most beautiful experience you will ever have. You're not supporting "rioters" by doing it. You're showing the whole world that everyone here cares about justice. And we'll get it by standing up to injustice together, united in these states, finally once and for all. 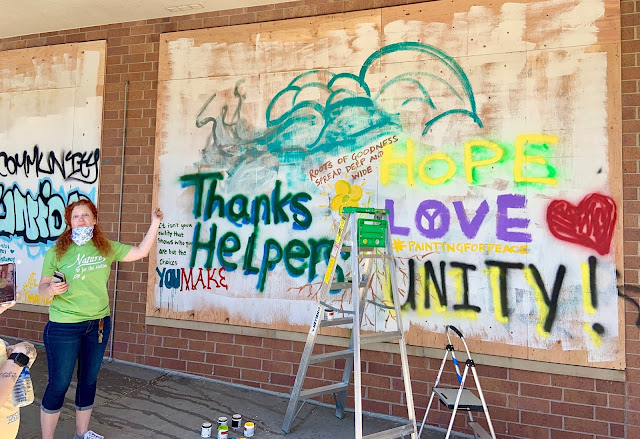 There is no other choice if we are to ever have harmony. One Love!

*There are SO many ways to help. Donate to We Love Lake Street.  Donate food. Help clean up. March. Show your white face caring! You can do it. TRY EMPATHY. Thank you. Deeply.

**Please stay tuned for the story of Sunday. Whoa.