38th & Chicago - A Sacred Space For One Human Family


Yesterday was the anniversary of the day we lost my Dad to awful cancer when I was four. It is always a sad day for us, but was especially so this year, because the world itself is so sad, but also because I'm currently in our childhood home taking care of my Mom and older brother, and we found three big boxes of love letters to my Mom from my Dad that she just blazed through, so she's missing him extra this year. She raised myself and my two brothers all by herself since then, and we have first hand knowledge of how hard that was, and what George Floyd's children now have to feel for the rest of their lives. Mom has been watching it all on the news due to the pandemic, but really wanted to see it for herself. We thought a good way to honor both my Dad and Mr. Floyd would be to visit the memorial scene at the now sacred ground at 38th and Chicago in South Minneapolis. We took all the precautions we could, and off we went. And I'm SO glad we did. 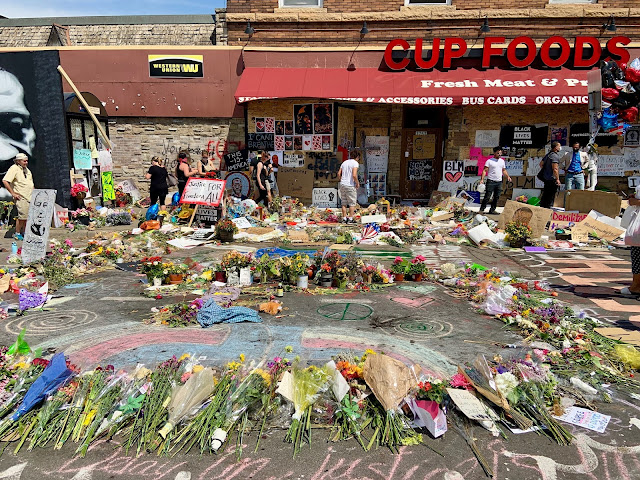 It feels a bit like a street fair as you approach the intersection of the site where Floyd was murdered by Minneapolis Police just over a week ago. The whole world has exploded in outrage over it, and this corner of our city will never be the same - nor should it be. THIS time simply must be different. And LASTING. The entire planet is together in this uprising, going through the five stages of grief in different time zones around the globe like we're doing The Wave. I think Minneapolis is now in organizing mode, possibly depression ... with acceptance looming up ahead. But we need to go further in our grief ... to be BETTER, not just accepting. 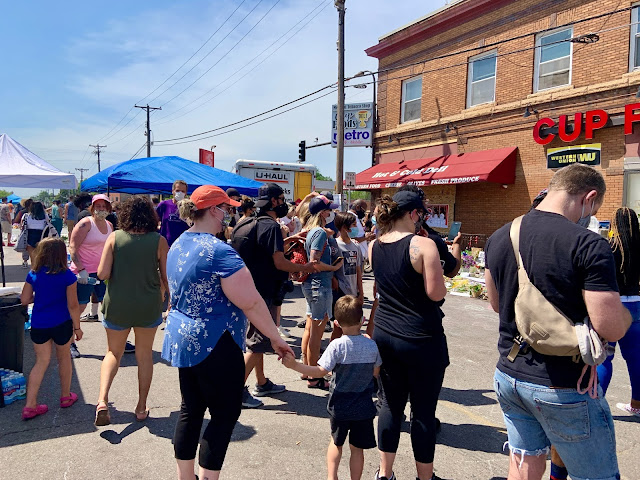 Parents were there with children. I was there with my Mom in a wheelchair. Elderly people were heading that direction with walkers. Literally every walk of life was there to pay their respects, see it for themselves, and to show their solidarity in this struggle for systemic JUSTICE over systemic MURDER. It is so powerful to see. 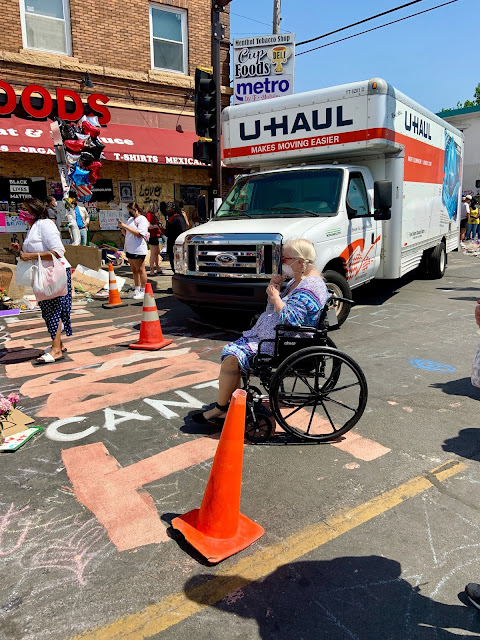 Helpers remain everywhere, and this intersection was full of them. Booths were set up to distribute prepared food for everyone there, all for free. We had some delicious empanadas because the darling women would not take no for an answer, and about a hundred people were asking if anyone was hungry or thirsty, and then making sure that they weren't. 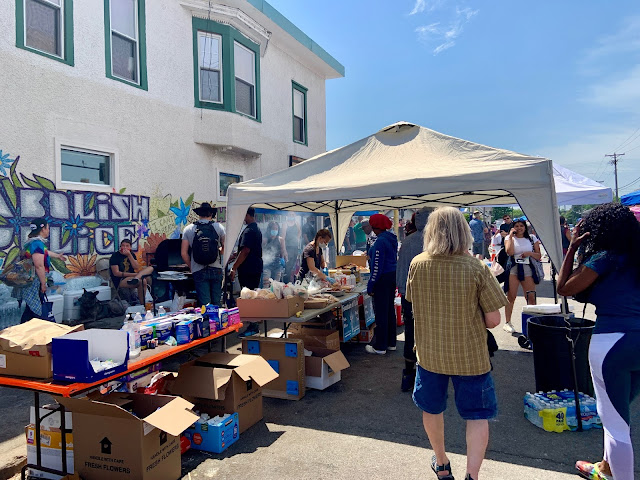 There was also an area to distribute food boxes, fresh produce and canned goods, gallons of milk, diapers and cleaning products ... anything that anyone needed due to their area's stores being boarded up or destroyed was there and free of charge, thanks to all of the wonderful volunteers and donations. Minnesota will have your back. 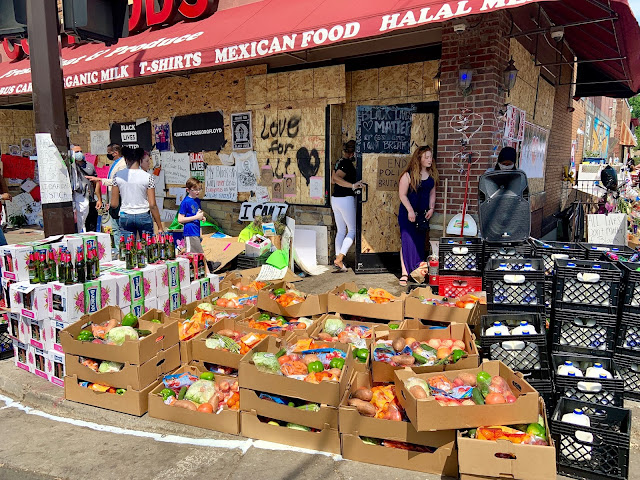 Seeing the actual stretch of sidewalk where Floyd had the life choked out of him by a man paid to serve and protect all of us is SUPER emotional. I had already been there, but it hit my sweet Mom very hard. Especially because of the significance of the date for our family. She was openly crying, and I think that was good for everyone to see. That a little elderly Scandinavian white woman in a wheelchair cared enough to be there to show her support, even in a pandemic. People could not have been sweeter, creating wide paths for us to traverse through the crowd, and saying that they appreciated her being there. I hope so much that the people who have been SO judgemental about the very necessary protests will find it in their hearts to visit this place for themselves, to gain a little bit of understanding of the situation, and dig deep to find where the empathy lives inside of themselves. It will change your perspective, and it will make you a better person for being there. Of that I have no doubt.


An older Black man was playing his guitar, when a teenaged looking white boy came along with his own guitar to join him in a jam. It was just one of the many displays of unity and one love that touched my heart while we were there, but then every single thing fully squeezed my heart, both in sadness, anger, and full on inspiration that through all of this we will have created a much better future. 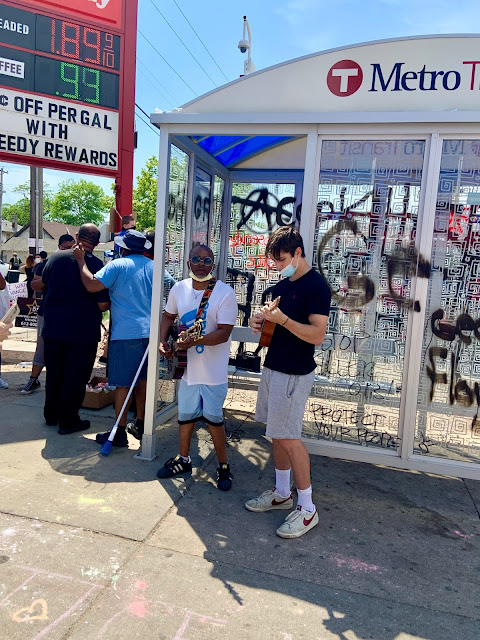 I've had people who know me and how deeply I care and feel about this situation literally defending the driver of the semi that barreled through our peaceful protest on Sunday before even asking how I was. The same people who know that Minnesotans stop on a dime for a duck, thinking that a professional driver of a gas tanker somehow couldn't get it together to hit his brakes for thousands of people up ahead? I mean, c'mon. No charges for him, either. I got a speeding ticket for being 10 miles over limit ten feet away from the sign saying the speed I was going, but this guy doesn't get even a citation for nearly killing scores of innocent and peaceful protesters. Give me a fucking break. And if language bothers you more than murder of innocent, unarmed, handcuffed people, go look in the mirror and ask yourself what is wrong with you ... and why. Then please work on that, for the sake of us all. Growth is crucial to a well-lived life. I'm ultra-done arguing with anyone who still doesn't get it. Going forward, I'm really only interested in how people are helping this cause, and if you're not helping, it's time for another trip to the mirror to search yourself for why not. Opportunities to help are vast, from in-home phone calling and emailing and donating for change, to out on the streets, cleaning, feeding, marching, showing your face in support. There is something for everyone to do, and zero excuse not to. Thank you in advance! 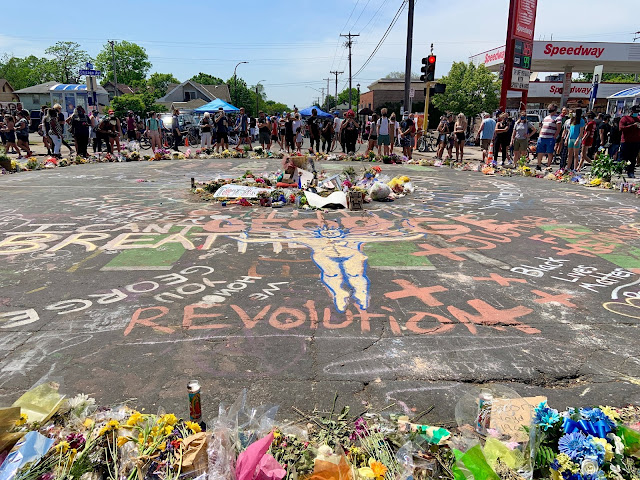 It absolutely baffles me how hard it is for some people to grasp this global situation, and how it has been brewing for centuries. How this upheaval should have happened a long time ago, and how vigils and voting historically hasn't done much. Nearly all positive change in this country has come from civil unrest, and if you don't know that, I don't know how to help you. What I DO know is that history will look back on this time in our country, and I know that I'll be on the beautiful, right side of it. Will you? Minneapolis people don't get to claim Prince or Lizzo, and then NOT stand up for Black Lives Matter. You just don't. You also don't get to tell your grandkids that you had anything to do with changing the world, because you didn't - unless you get out and get involved NOW. You are needed. It will take every one of us to right the wrongs that have plagued this country since even before it officially was one. Let's together say enough is enough. Please. 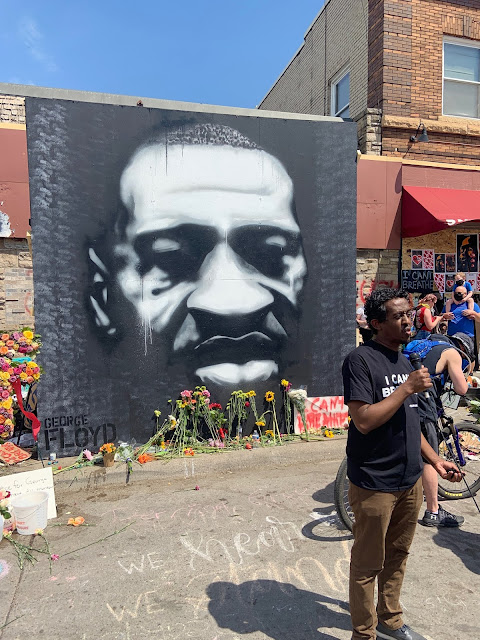 Anyway, I digressed for a moment, and want to return the focus to what a completely beautiful and inspiring place it is to be at 38th and Chicago. Music played, people danced, people consoled, and strangers told each other that they loved them. Despite the horror that occurred exactly here on May 25th ... Memorial Day ... this will now forever be a place that is ALWAYS Memorial Day ... sacred and beautiful, because this is where maybe - just maybe - true civil rights began. There will most likely be a museum here. Don't be late to the party. 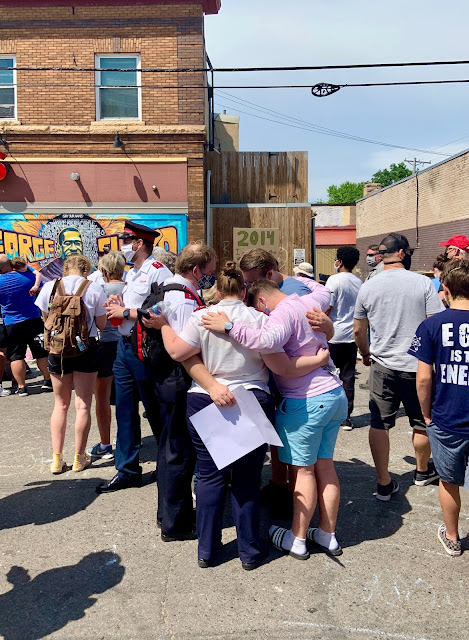 By the time we went back to our car, Mom's tears had turned from despondently sad to positively hopeful. That through these times we can see the light up ahead ... for everyone. And for good. She was so glad she went. I was so glad she went. I can hear her on the phone telling her friend about it now, and it makes me even more proud to call her my Mom. I didn't get to know my Dad nearly as well, but he was a member of the National Guard, and I'd like to think he would have stuck up for me out there. I'm so sorry to George Floyd's that they won't get to have their Dad anymore either, but I hope they know how much his life has now meant to all of us. A true and lasting legacy to be proud of forever, around the world.  I don't want my Dad to be forgotten either, so here's a shot of him in his grooviest prime. 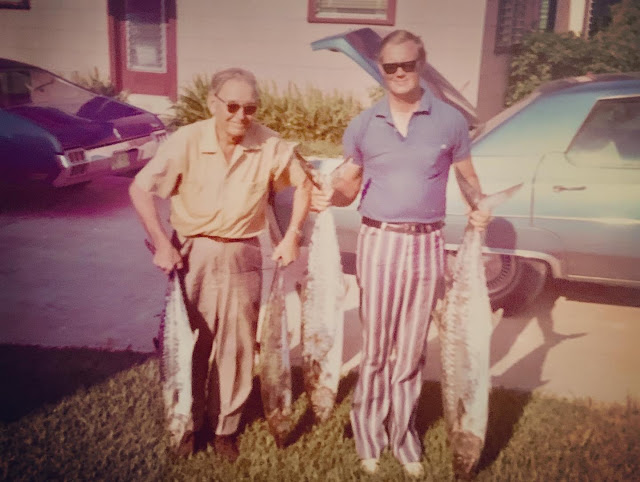 One Human Family, I love you all, and I will work for and speak out for you and what's right as long as I'm lucky to be breathing. To the ones who are somehow not on board with this sentiment, I'll hope that you will educate yourselves and find your empathy soon, because your world depends on it too. ONE LOVE.


*A small victory: All four murdering officers have now been charged. Our actions are doing something. Not nearly enough, but this is something. On to the permanent end to systemic murder, violence, and gross inequality to people of color by this society. EVERYONE has had enough.