Well, I'm back in Minneapolis for a bit, but always take a little Venice with me. I was happy to hear that muralist Jonas Never (artist of the big black and white Touch Of Evil piece on Windward in Venice, among many others) was here in town working on a big Prince piece downtown in the North Loop, on the side of a Floyd's Barbershop. 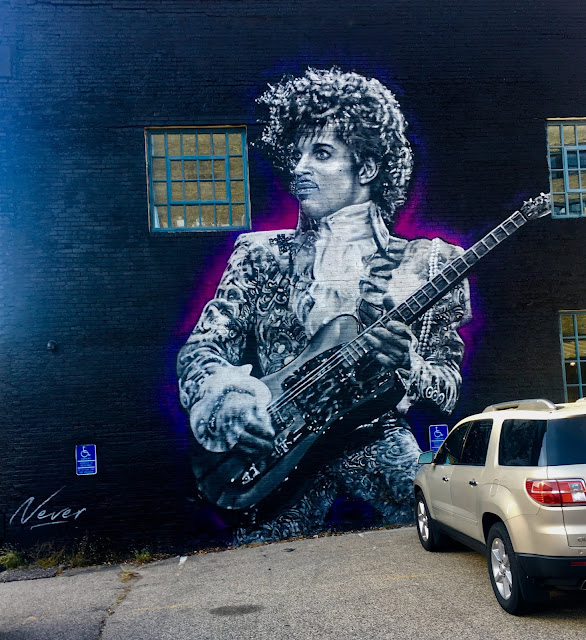 I went down to check it out, and it's a great addition (though the face reminds me more of Fred Armisen as Prince) to the many Prince tributes around the legend's hometown. It made me want to pay a visit to Paisley Park, as I hadn't been out there since I went after Prince's death in 2016. All the hoopla has settled down out there, but as I drove down Highway 5 past Paisley Park, I had to pull over fast. I saw that down a bike path along the highway there was still a big fence full of purple tributes to Prince Rogers Nelson. There was nowhere to safely park, so I went to an office park, climbed a fence, walked back along the highway, through a drainage ditch, over another little fence, and behold - a beautiful memorial remains for all to come from around the globe and pay their respects. 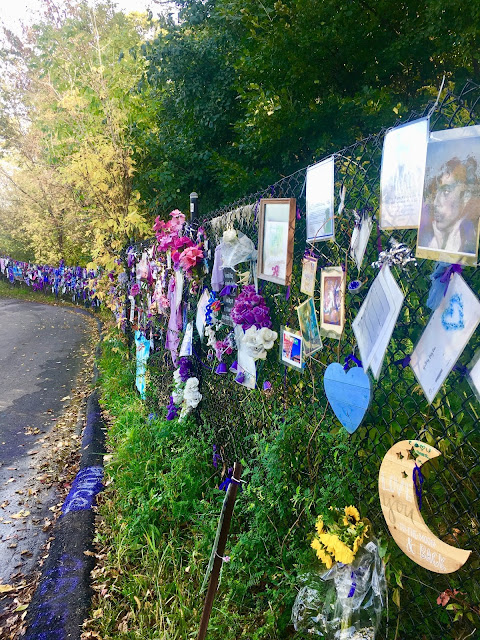 There were so many lovely sentiments written, and so many creative ways of showing one's love for the Artist that can never be replaced, and who will clearly never, ever be forgotten. People had whole books inside of plastic sleeves, flowers, pancake mix, starfish and coffee, and even a purple Prince jacket. One could spend the whole afternoon just reading what Prince has meant to so many. 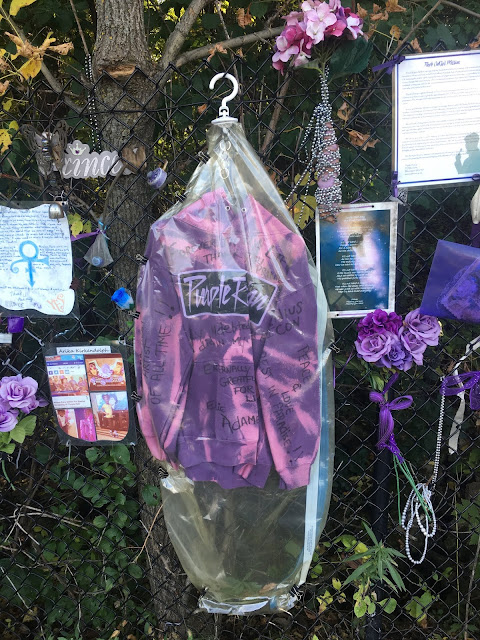 A little sign said that the memorial was kept up by area neighbors, and to please not take anything, and to be sure to visit the tunnel too. Tunnel?! On my way ... 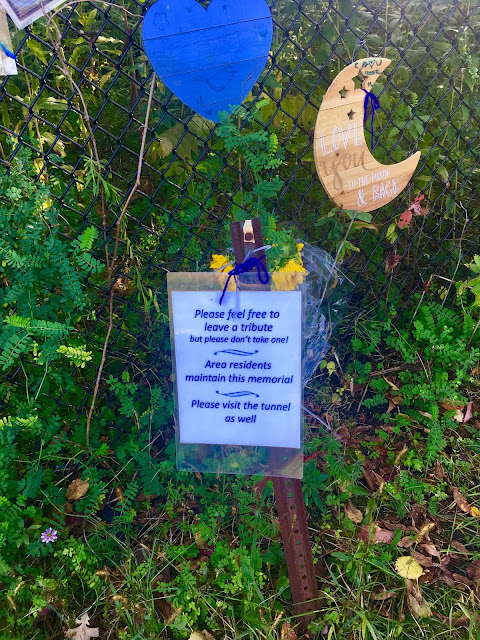 I was surprised to see a guy down there in the tunnel under the highway, wearing a purple beret and painting away at an easel. His name is Dan Lacey, and he is known as the "Painter of Pancakes". I remembered seeing him back in 2016, when he was set up among the droves of mourners and tributes, doing a piece of Prince on a bike. 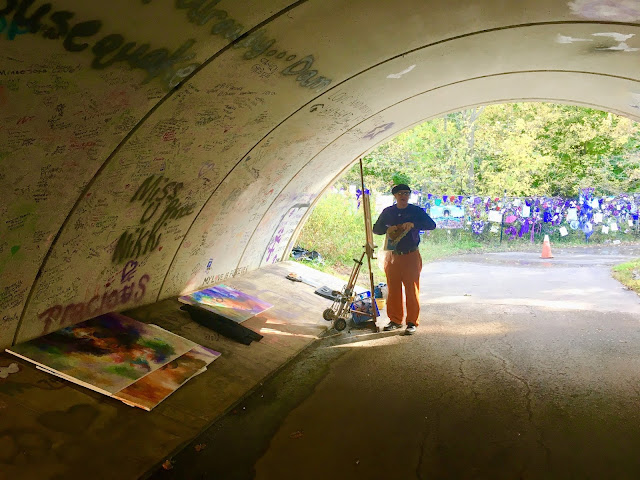 Lacey continues to paint Prince and help maintain the Memorial, and he was great about giving me all the information and trivia on Prince that one would ever hope for. He even had a flyer printed up called "Prince's Places", and you can go visit the various homes and landmarks made famous by our beloved native son, including all of the local murals. 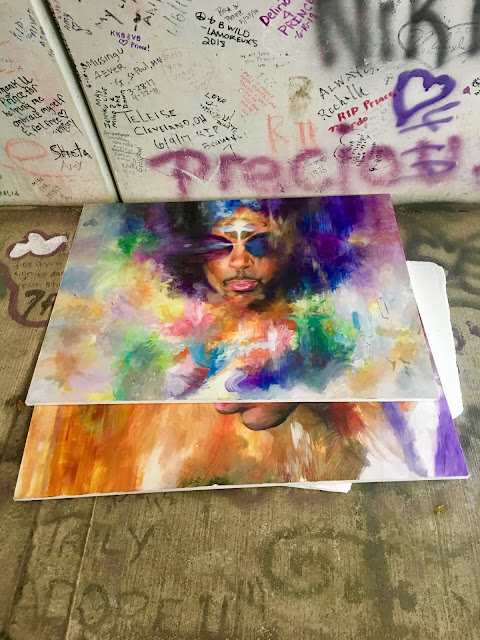 There was a piece of Prince done on the ceiling of the tunnel, that Lacey told me was done by an artist that used to cut herself, but now uses knives to create. He pointed out the detail on her piece, and you could see that the whole work was made up of Prince symbols created with a knife. Cool. 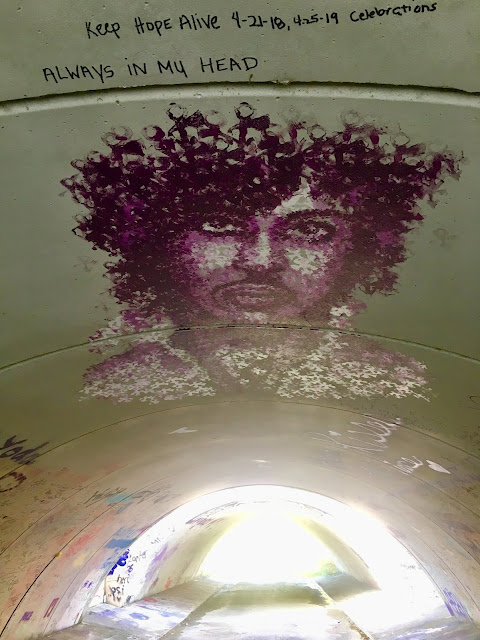 A couple more people came through while I was down there in the tunnel chatting with Lacey, and you could see that they too were visibly moved. It was their first visit to Paisley Park, and I forget now where they were from, but their point of being in Minnesota was to pay their respects at Paisley Park. Prince's life was so big and reached out so far, that it's sad all over again when you realize what a massive void his loss has left, and how easily it could have been prevented. It's truly a damn shame. 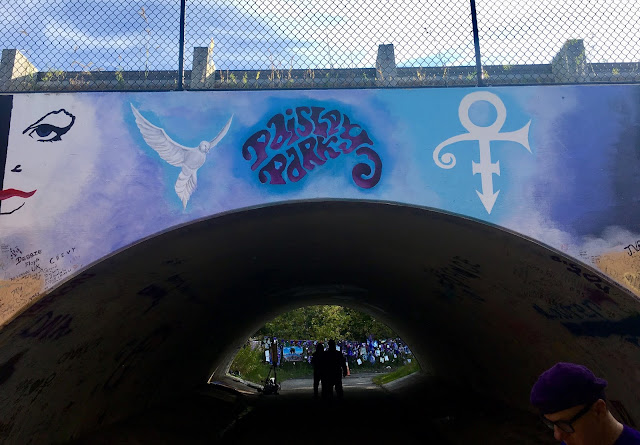 I told Lacey I would let him know when the Never mural was done and where it is, so here you go! And thank you for helping to keep the wonderful memories of this once in a lifetime star alive for Minnesotans, and for his legions of fans from around the world. He was truly something else.