Venice Gets A Rainbow Crosswalk!


It was crazy to be back in Venice after being gone all summer, and to see how much things have changed. So many businesses gone, so many new ones in. I found myself fondly remembering the days when we stood up and fought against chains, and ran Pinkberry out of town in just a few months, and I liked Pinkberry - just not in Venice. With so much of the cool being priced out of Venice, it was nice to see one NEW cool thing ... a rainbow crosswalk on Abbot Kinney! 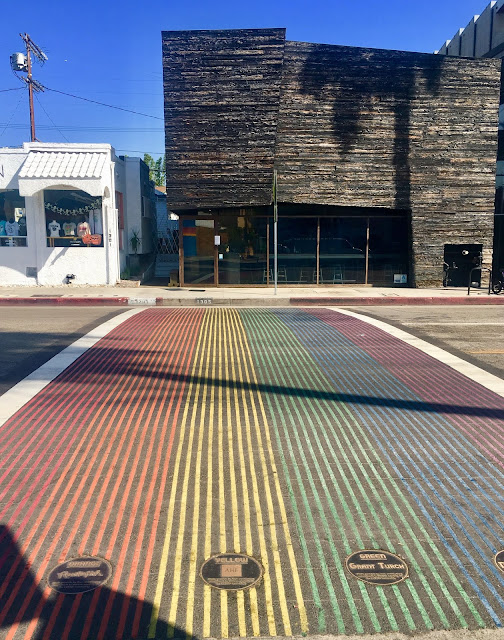 I remember sitting in Tim Bonefeld and Erinn Berkson's (owner of one of the few remaining locally owned businesss on Abbot Kinney, the wonderful Burro!) living room after dinner a while back, and Tim talking about how he had the idea for a rainbow crosswalk to replace the dingy one outside of The Roosterfish ... and he made it happen! Dedicated on June 28th, 2019 (when I was gone, sadly) it now glistens there in the sun, AND makes crossing safer on AKB.

The Roosterfish used to be my Abbot Kinney Festival go-to spot to use the ladies room, as there was never a line for it in there. It was almost all gay men. Those days appear to be gone, as the place was packed with the Millenial crowd, and who knows if anyone was gay anymore in there. That's fine, it's just different, and I feel a little bad for all the people who would gather there in THEIR spot. Still, it's pretty cool to have the first rainbow crosswalk in Los Angeles celebrating our LBGTQ friends right here in Venice. 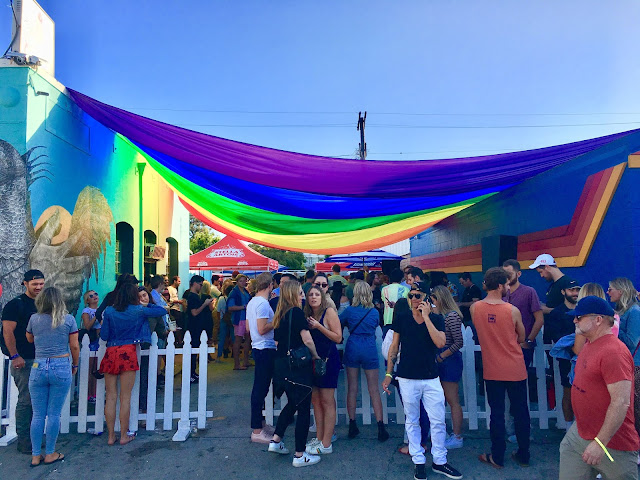 There are plaques in the street for the people who sponsored each color, and they are all to be commended (especially after the debacle this year between Venice Pride and the Venice Chamber of Commerce, who refused to let them use the Venice Sign for Pride - yeah.) for making Venice still have a little cool, and making the now douchebag-filled Abbot Kinney (Seriously. Locals I spoke to that haven't left didn't even know about the crosswalk because they won't go to AKB anymore!)  rainbow bright!