AHHHHHHHH. BACK IN VENICE! And just in time for the annual Abbot Kinney Festival, that I don't believe I've ever missed in 25 years, and wasn't about to start now. I got in from Minnesota the night before, and woke to a beautiful, sunny Indian Summer Venice day! I believe I didn't stop smiling from ear to ear the entire day, like my face actually hurt a little bit the next day. But WELL worth it. 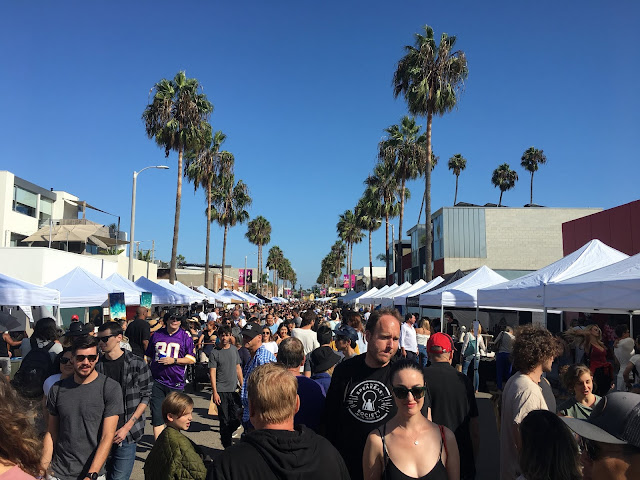 There was a Vikings game on also, so I had to catch a little of that, and then I couldn't stand it anymore and had to get out in the streets to see my people again - though I did encounter another Viking in the crowd (as seen above), and we checked the score together (and that made me not think about it again that day). I had my first stop at Beyond Baroque to see the exhibit A History of Venice put on by the Venice Heritage Museum just in the nick of time, as it was its last day, and they were about to do the closing ceremony prayer. 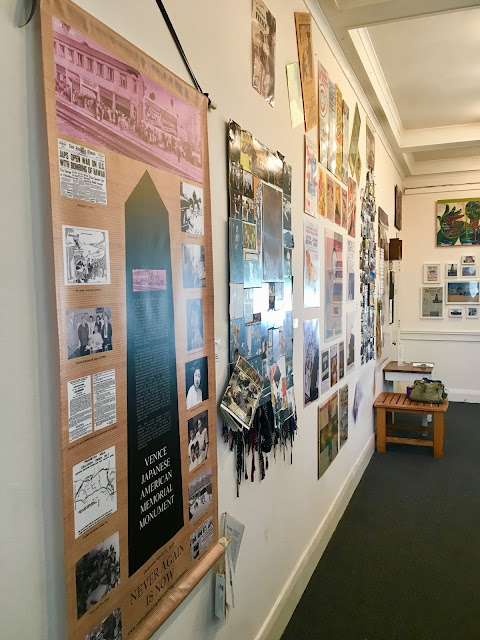 Arranged by decade, the exhibit was awesome, and I wish I'd had more time to really give it the attention it deserved, because it was a LOT of work, and a LOT of Venice history. Just glancing around the walls, you felt the years and years of creativity and change surround you ... and made you happy that you had even some small part in it. 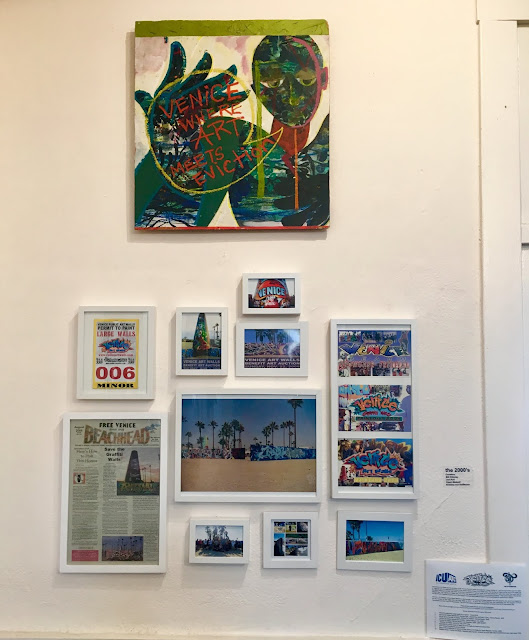 It was a great joy and relief to see so many friendly faces, and receive so many warm embraces from my Venice friends who know what I've been dealing with all summer with my Mom back home in Minnesota. It made me heart actually swell up to know how many people actually really do care. THANK YOU! We all went outside to the garden to hear a prayer from Mike Bravo and his Tongva Tia Angie Behrens. It was beautiful, and set a lovely tone of appreciation for the day ahead. 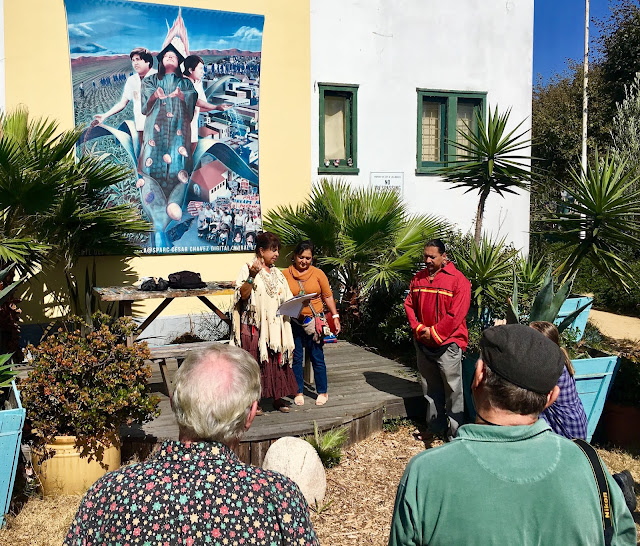 I dove into the sea of people on Abbot Kinney, and it might have been more packed then I've ever seen the Festival - with mostly people I didn't know. That's a kind of sad shift, as it used to be you could pick out the people you didn't know ... but it was still a blast to run into old friends every five feet or so. This year it was less about booths and music and stuff for me, as I really just wanted to see as many of my friends at once as I could. There was no real "Locals" stage this year for us to have as our headquarters, as my friend Matt Ellis who usually books it, moved to the desert. I guess the Winston House did it this year, and I'm going to have to help them with booking locals, as I'd never heard of any of them. Except the Samba School that closed it out. I always love to see them parade through the Festival, but this time they got their own headlining spot, which was fun. 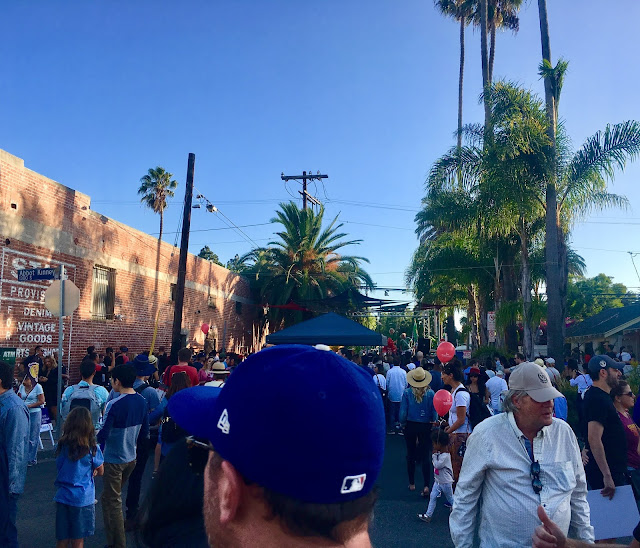 It was such a blast reuniting with everyone, I didn't even want to stop to eat or drink, but one must survive. We zipped into Gjelina for a couple minutes and bites, and then I had to go check out Attaway, who was showing his art in the space out back behind The Stronghold. 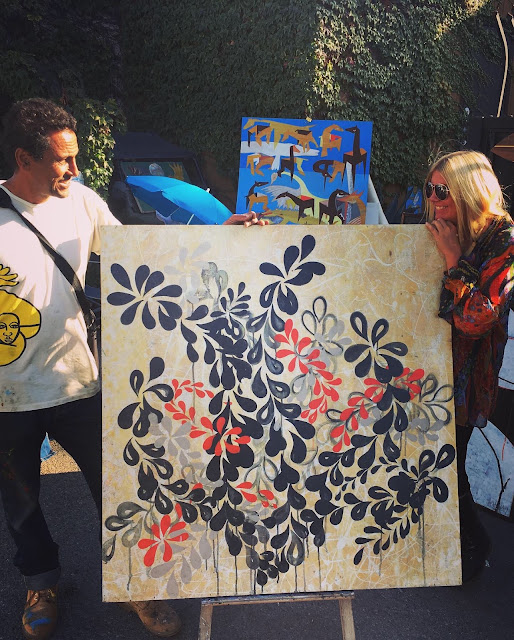 The art was as good as ever, and I was happy to see one of the subjects of our film 90291: VENICE UNZIPPED (which we were also shooting for in the middle of all of this!) doing so well, and being his usual philosophic and awesome self. 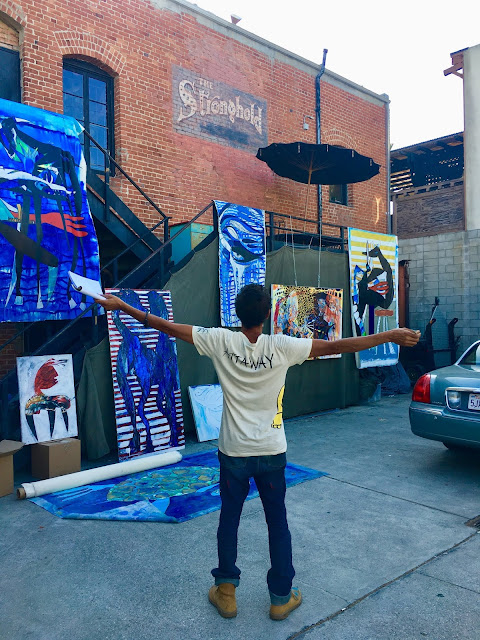 You have to take breaks at the AK Fest, so we did a little time at my friend Darla's house, before the fear of missing out made me drag everyone back out there. I got my friend Stephanie back in Venice from the Valley, and it was just like old times, Man. Loving every minute of it! 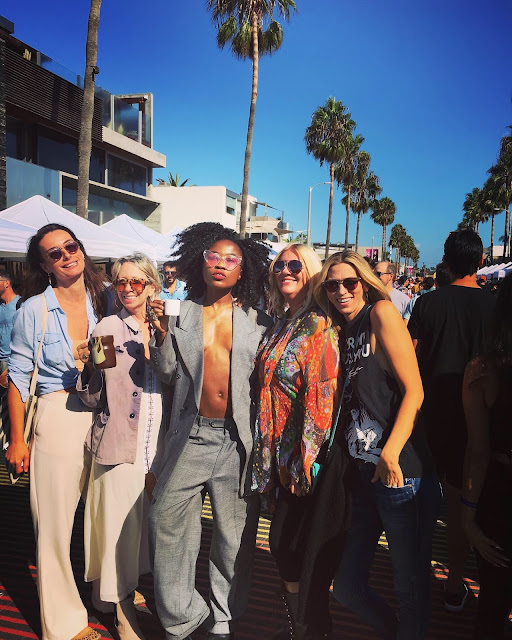 The new Roosterfish was going off, but now it's full of Millenials taking selfies. Gone seem to be the days of ducking into the Roosterfish to use the bathroom during the Festival, because there was never a line for the Ladies Room. Sigh. Looked like people were having fun though, and I dug the rainbow awning, AND the new rainbow crosswalk out front! 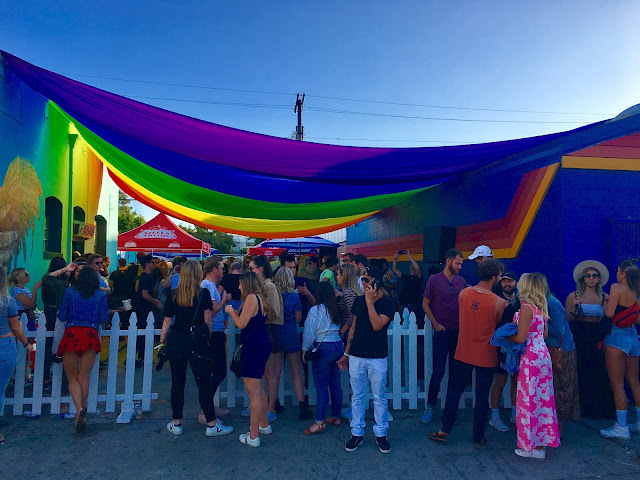 I want to say too, that it meant SO much that so many people asked how my Mom was doing. People who don't even know here in real life really care, and it warmed my heart all day. I didn't pay much attention to the booths and stuff, as I mentioned this year was all about those people for me. It was great, however, to see so many booths still being put up by locals. Principessa, Ananda, Trim, The Stronghold, Amiga Wild, The Venice Art Walk, and of course, Dogtown and Hecho En Venice, were all out there representing, and that made it easier to find those friends too! I want a do-over of the whole day, really, just so I can see even more people and stuff. 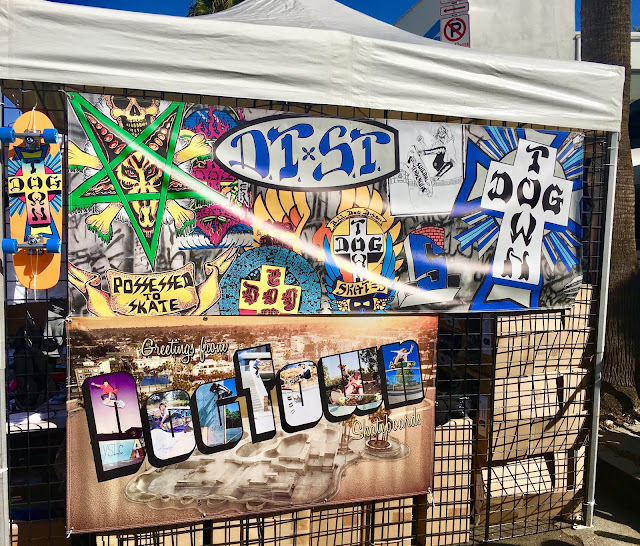 A highlight of my Festival this year was this little hippie dude walking through the crowds selling what looked to be flower crowns. Weaving through the gridlock of bodies, he was just smiling and spreading the love ... exactly what I want to see here in Venice. Thanks, Brother! 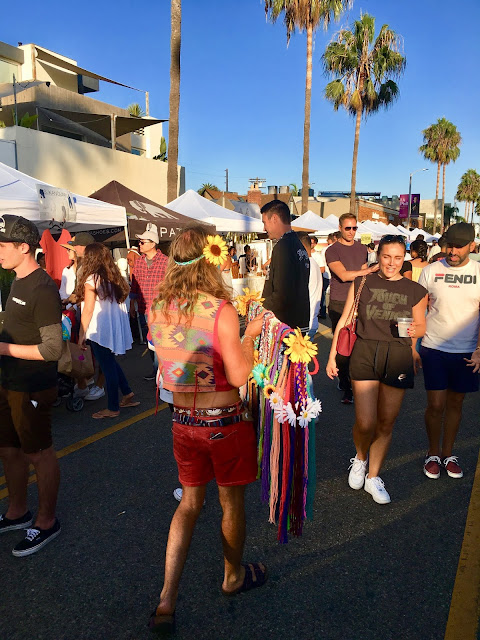 Another little break led us almost to sunset, and some of the most beautiful lighting ever. Everywhere you looked revelers were snapping photos of how gorgeous it all was, and no one could blame them. The Festival was winding down, but everyone had had so much fun, no one wanted it to end. People stood around in the street as tents and booths began to come down and the cops did their sweep. 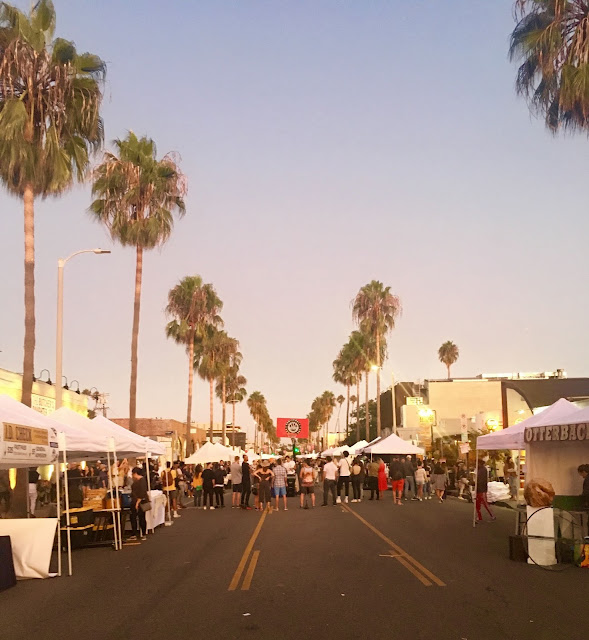 The Venice Metal Works space was going off with actual heavy metal drawing a big crowd. I didn't catch the name of the band, because I too was partying, but they were good! 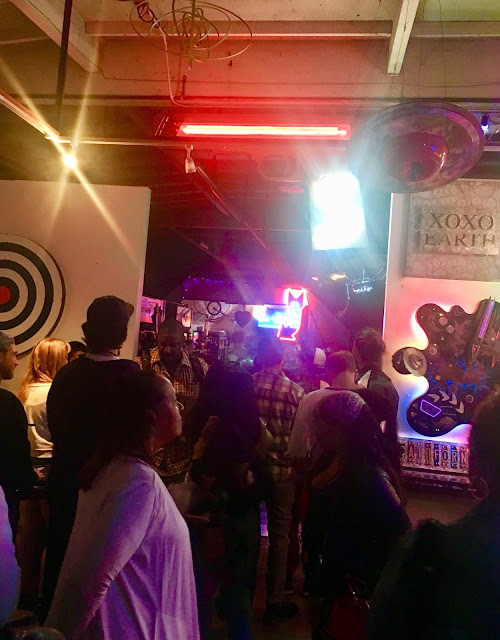 A little old lady was playing her tambourine along with the metal, and that was another highlight of the day for me right there. 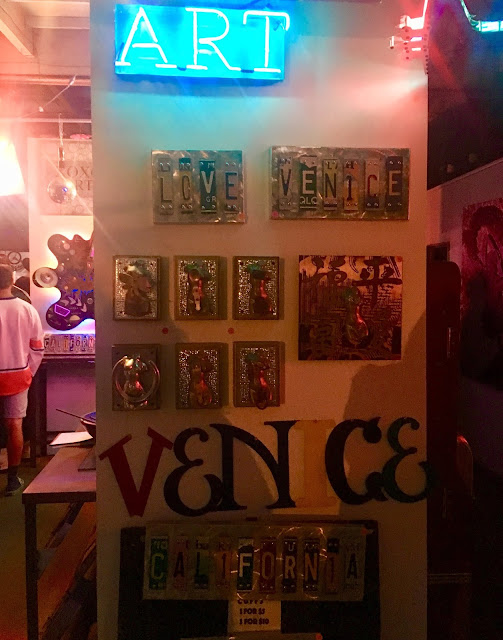 The Brooksfest thing was happening again this year (WHY don't they do it another day?! There's too much to get to as it is!!), and we passed it by on the way to the sunset at the beach that I have been craving all summer. 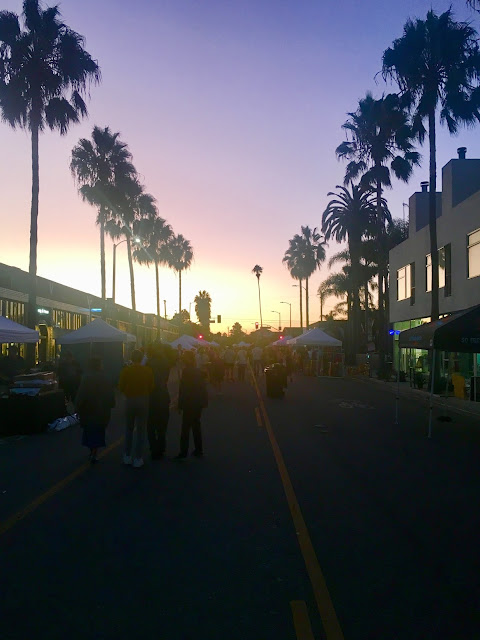 It was packed in their parking lot, but that's not what we needed at the end of a packed day. We needed a sunset at the drum circle and a burger at Hinano. And that's exactly what we got. 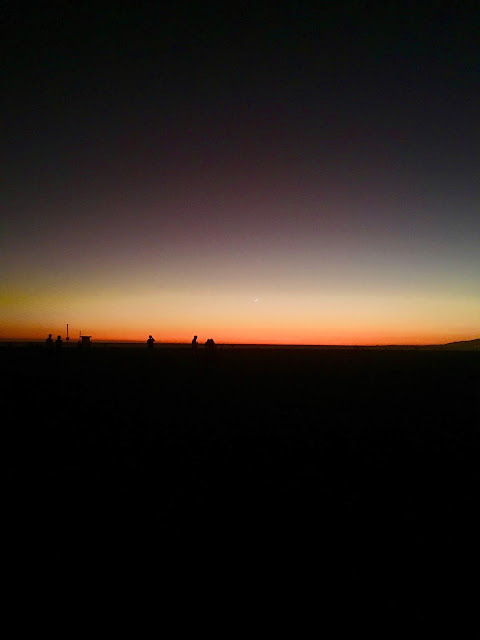 What a fantastic day. It carried on much, much later as I had to sit by a fire and just talk forever with friends who I've missed so much all summer. I need to say a massive THANK YOU to all of Venice for welcoming back with such generous, loving, and open arms. This has always been the home I CHOSE, and every time I'm here it's clear to me once again why. I would go on much longer about this, but now I HAVE to go to the BEACH. The sun is out and I haven't been in the water since May ... but hope to see you ALL soon!

I love you, Venice.