My welcome back to L.A. was extra great after having been gone since last May, as I got to go racing from LAX straight across town just in time to make it for the 5th annual Jail Guitar Doors ("The loudest charity on Planet Earth!") fundraiser show starring Moby and Wayne Kramer at the Ford Amphitheater! 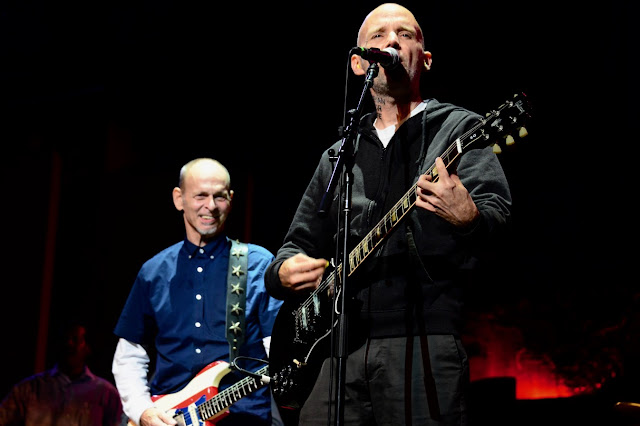 My friends Brother Wayne and Margaret Kramer have been putting on this event every year to raise money for Jail Guitar Doors, and their exceptional programs that bring music to inmates in prison. After checking out the merch (there's even JGD coffee now!), and greeting several other annual JGD show fans, my brother Paul and I took our seats in the front row, ready to take in another great night of music put on by great people for an absolutely great cause.

A recording played to announce that we were sitting on what was once Tongva native lands, and then Brother Wayne came bounding down the steps to the stage, punching the air and riling up the crowd right off the bat. I was SO happy to see him looking so healthy and hale after he endured cancer treatment this last year, like he was way more energetic than just about everyone else the whole night. Phew. Kramer  thanked Dr. Bronner's (the soap people) for underwriting Jail Guitar Doors being able to provide programs for young people to get them into activities that will PREVENT them from ever entering the criminal justice system ... because once in, it's pretty damn hard to get out and resume a regular life. And then the world is better for everyone. 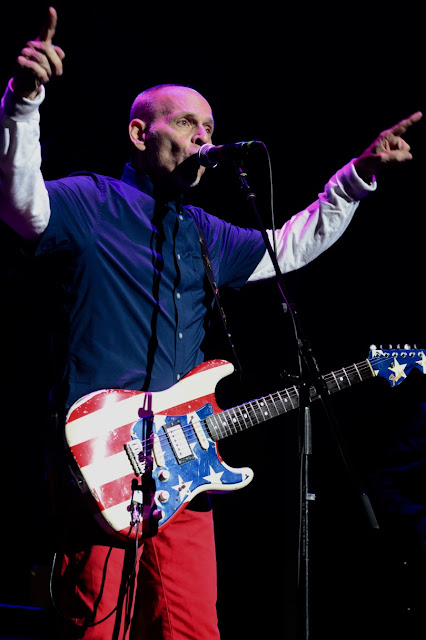 The evening was hosted by the Poet Laureate of Los Angeles, Luis Rodriguez, who sits on the board of Jail Guitar Doors. Rodriguez has done time, as did his father and son, and he wants that cycle ended. "I'm an O.G. when it comes to this work," he said, before sharing a beautiful poem that had the excellent line, "Use your given gifts. They are not stone." YES. 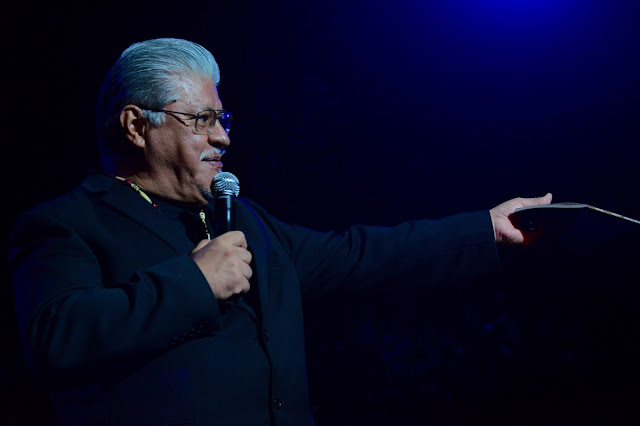 Rodriguez introduced the Soledad Jazz Workshop, a jazzy quintet founded at the Soledad State Prison in California. Mr. Jack Bowers was their teacher, and everyone playing so beautifully had also done time. Ron Melvin (alto sax) spoke after their first number, saying that, "Jail Guitar Doors believed in me until I could believe in myself." He added the important truth that, "Beauty can come from anywhere." 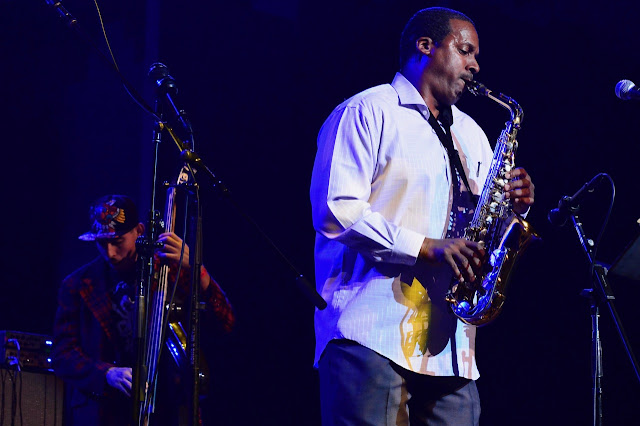 Trombone legend, Phil Ranelin, was featured on the song "All The Things We Are", and said it was written the same year he was born, 1939. He can still blow with the best of them, and we also got  the Miles Davis classic "All Blues". It was all really, really good, and the only reason I can think of that some people don't like jazz is that the songs are so long, and you start to feel left out of the jam conversation that the musicians have going together. So, you just close your eyes, listen, and it's all good. Real good. 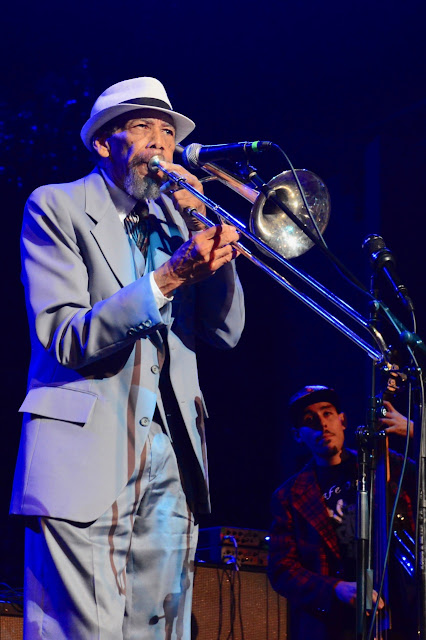 Rodriguez came back out to recite a poem called "The Calling". He told of how he had turned his life around through poetry in jail, and said that, "You can't throw people away ... everyone is worth helping." That's really the point of the whole JGD organization. The poem gave me chills, and also the gratitude and relief that there really still are really good people out there. Thank God. 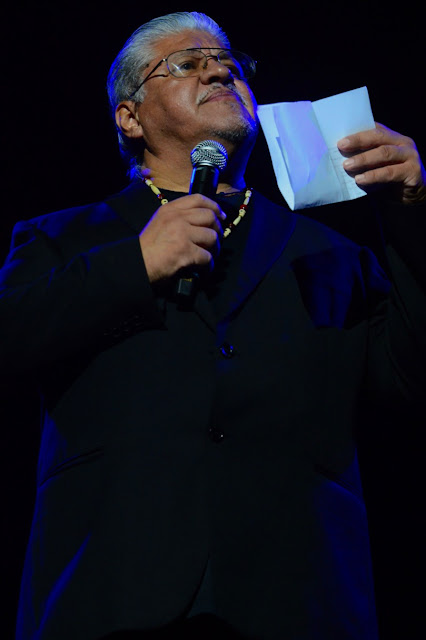 Rodriguez introduced Wayne Kramer and Friends, and Kramer ran back on stage, this time with his legendary Star Spangled guitar, yelling, "Alright, now we're gonna rock!" and he and his band went on to do just exactly that. "Shining Mr. Lincoln's Shoes" had Kramer running around extra-animated while Carl Restivo held things down on bass, Brock Avery kept the drum beat, and Benmont Tench (yes, from Tom Petty & The Heartbreakers Benmont Tench!) on the keys. 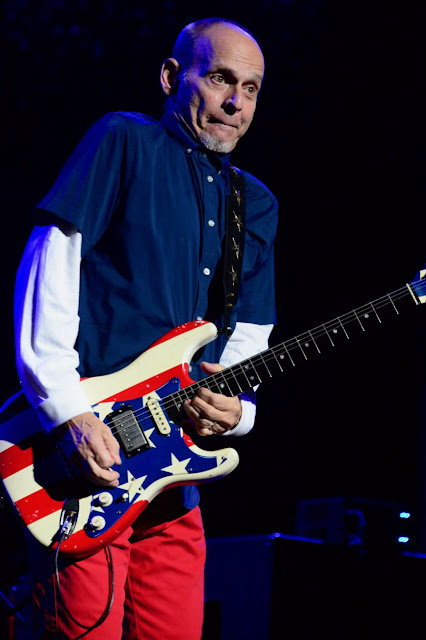 "Back When Dogs Could Talk" featured Kramer doing the funky chicken and also shouting out to all the workers of the world ... "My steel workers, my food service workers, my auto workers, my teachers ... you have earned the right to be known as the salt of the Earth! You are somebody!" It was awesome, and a fine example of why Kramer rules as a human being AND as a rock star both. 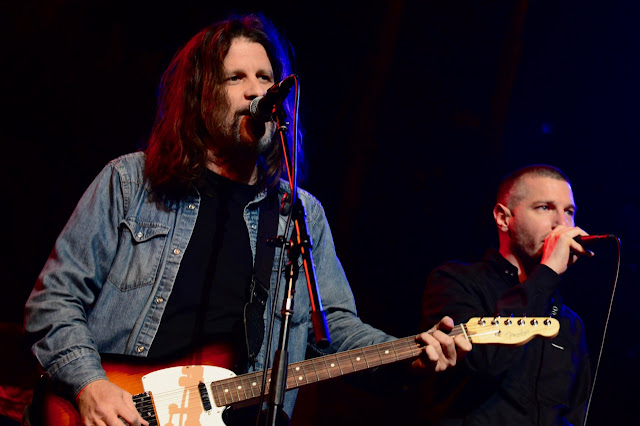 Kramer brought out my friend Jason Heath (lead JGD teacher and leader of The Greedy Souls) as well as the rapper Matre to join he and the band for a fired up version of "Jail Guitar Doors", the namesake song by The Clash. Everyone was feeling it, and frankly, their set was over way too soon, but it sure got the party going! 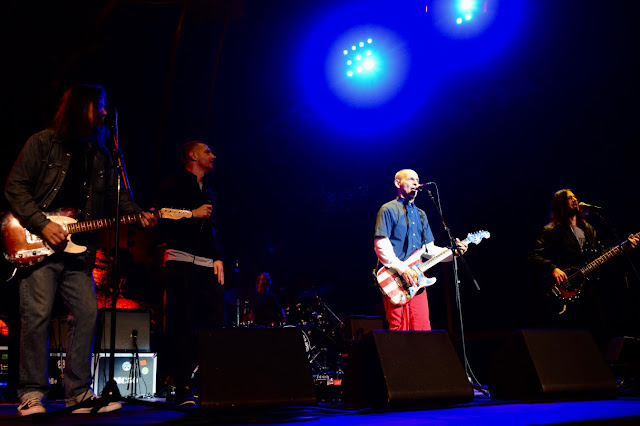 Mr. Rodriguez came back and we did a call and response poem together, saying "Make this poem cry!" It did its job, because I definitely got choked up. No time for tears, however, as Rodriguez said, "And now, Moby!" and Moby came out with his band and back-up singers, who launched right into his great song, "Extreme Ways". Dressed casually in jeans and a hoodie, Moby rather resembled a much smaller Billy Corgan with a "Vegan For Life" neck tattoo. 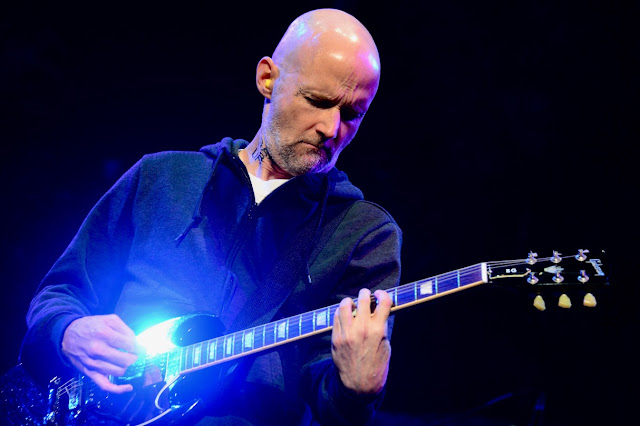 The crowd loved the song, and let the band know. Moby said that he'd driven by the Ford Theater a thousand times, but had never been and didn't know it was so beautiful. "This is the most beautiful outdoor theater in Los Angeles, and that's saying something." We were all already feeling lucky for being there, but that jacked that sentiment up even more. A truly stunningly gorgeous evening, as the stage looked like an enchanted forest and beautiful letters from prisoners and photos were projected on the interior walls. 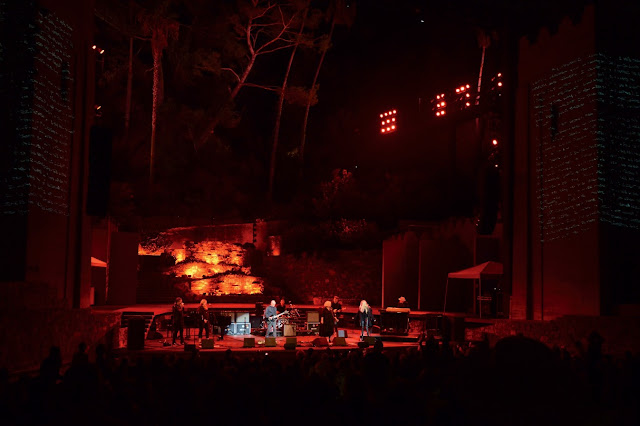 Moby said that the only thing he had in common with Jimi Hendrix was that they had both only had one #1 song in the U.S. ... then proceeded to play his. "South Side" sounded as good and as fresh as it ever did, and I have to admit, I didn't ever really know how good a guitar player Moby is. I always associate him with synthy sounding orchestral super produced tunes, and it was cool to see him pretty stripped down and really going for it live on guitar. He said he was a punk rock kid, "So I fetishize cover songs," and they did mostly covers from thereon out. Mindy James took lead vocals for a re-working of The Rolling Stones' "Gimme Shelter" that she absolutely belted out, and Moby shredded out the guitar solo. 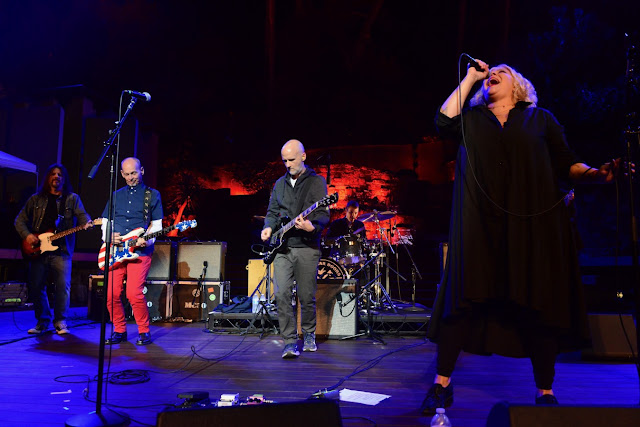 Moby loves John Lee Hooker, so next we got "A Dark Cloud Is Coming" which was inspired by Hooker, and was very dark, bluesy, ominous, and pretty heavy. It felt right for a night about prison ... but then the next one was "20th Century Boy" from T. Rex ... and the whole band was smiling and clearly enjoying themselves while they played, so it felt like hope again. Benmont Tench was back to be Moby's keys player too, and you could tell he was having fun. There was a dude/douche next to me who kept making lame GIFs during the show, then nudging me to look at them. Don't do that. Thanks. 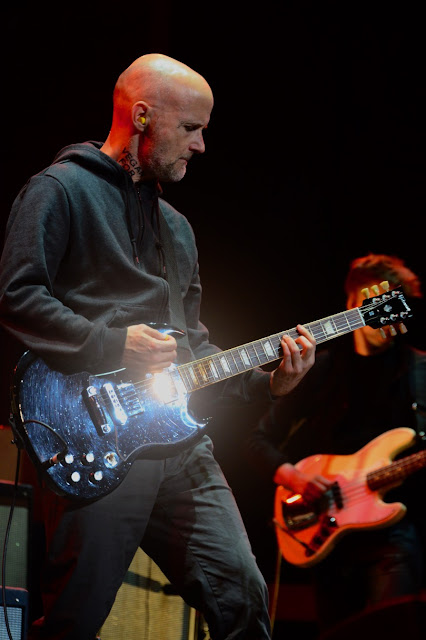 Neil Young's "Helpless" was dedicated to Moby's Mom, who he lost 15 years ago after a life of food stamps and welfare as a single mother. Laura Dawn took lead vocals, and I got choked up again thinking about my own Mom back home.  Moby's "L.A. song about astrophysics and weird celebrities" was next up, and "We Are All Made Of Stars" happened. I love that dang song, and his great "Natural Blues" was next, again featuring Mindy Jones in rad voice. A cover of Zeppelin's "Whole Lotta Love" found us witnessing a "primal, libidinous battle" between Jones and guitarist/backup singer, Daron Murphy on harmonica. Jones and Murphy traded licks, while Moby laid down on the stage to enjoy it, and an older woman danced like no one was watching in the aisle next to me. Good for her. 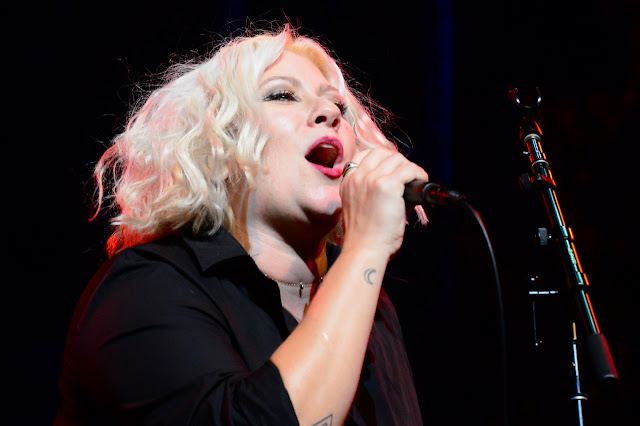 Next up was "The Mount Olympus of cover songs, the mother of all cover songs, we need you to come to Valhalla with us on this one" ... and it was "Stairway To Heaven". Murphy took lead vocals while the band whipped the audience into a frenzy - and an older man had now joined the dancing woman, and they were both going off, spins and all, until "We drank vegan grogg from the skulls of our enemies!" proclaimed Moby. And you better believe we DID.

The All Star finale brought everyone back out together, and we all sang "The Perfect Life" together - and loudly. It was super celebratory, meaningful, and again, hopeful. At one point in the song, they brought it all down to a whisper with every single performer flat on their backs on the stage, which brought the whole house rushing down to the front to try to see them. 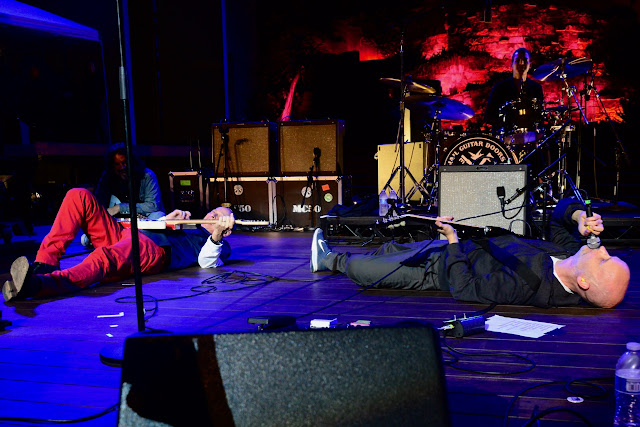 Then they brought it all back up to a joyous conclusion, and the hope that a more perfect life might be within the grasp of both everyone there, and everyone that they were helping by being there. There was no Kicking Out The Jams this year, which I missed, but this finale was so good that you could let it slide. Another fantastic night of music for Jail Guitar Doors was complete ... but the work continues all year. 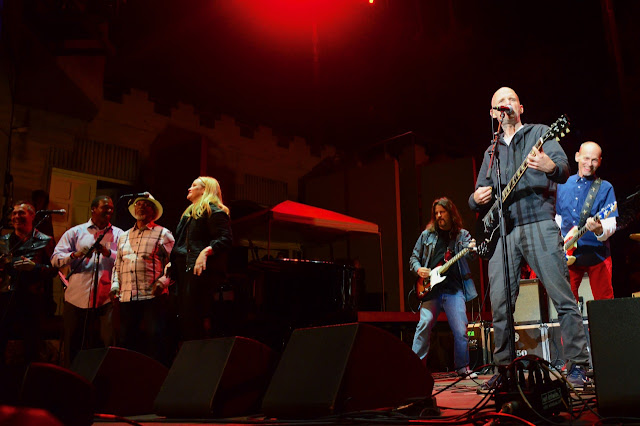 Please get involved however and whenever you can ... donate, volunteer, teach, spread the word! Jail Guitar Doors is changing lives for the much better, and we're all better for it. Thanks and LOVE to all involved with this exceptional organization!

All photos by Paul Gronner Photography