Clogtown: Trio Plant-Based - Good For Your Body and Soul Food


I was hanging out with friends in Venice a couple of years ago when they had friends in visiting from Minneapolis. I met Louis Hunter, who was going through a hard time back in Minnesota. His cousin was Philando Castile, who was murdered by police in front of his partner and child and it was all streamed live on Facebook Live. Hunter was involved in the protests that shut down a local freeway, falsely accused of throwing a Molotov cocktail at the cops (who were acquitted, of course), and was now facing his own charge with a potential of twenty years in prison. Heavy stuff. He had never seen the ocean, so we took him down to shoot pool at The Townhouse, and then out to the sand. It happened to be a rare night of the incredible phosphorescence that turns the waves neon blue in the dark. Incredible! I told Hunter that this was a fantastic omen for him - who gets to see phosphorescence the first time they see the ocean?! Well ... that turned out to be true, as Hunter is now the sole proprietor of the first black-owned 100% plant-based soul food restaurant in Minneapolis (and maybe the country), Trio Plant Based. 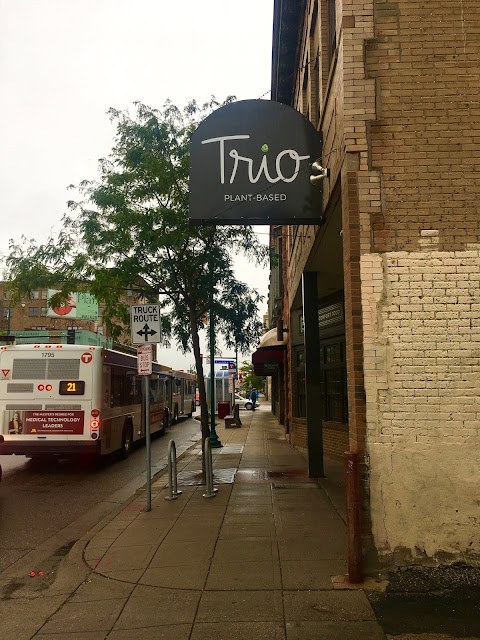 While I'm in Minneapolis helping out my Mom, it was high on my list to visit Hunter at Trio and hear his story. We met up last week on a rainy evening to catch up, and to try out his plant-based menu. I'll be honest ... I was less excited about the food than the chat, as I'm not afraid to eat real meat. My brother, Paul, was with me, and he leans pretty veg already, so Trio had already been on his list also. Being the only black-owned, plant-based soul food spot in town causes a great deal of interest, so Hunter was being interviewed by someone else on camera when we got there, so we took our time to peruse the menu and figure out what we wanted to try. Basically, all of it (there's another side to the menu too!). 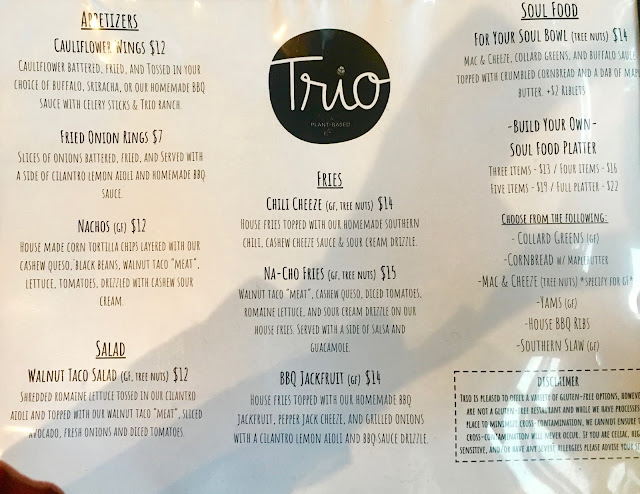 Located on the busy intersection of Lake Street and Lyndale Avenue, Trio provides great people watching from its light, airy location, and the dining room decked out entirely by Hunter and his brother is a great place to just kick it. We were wise to come early before the dinner rush began, as it was nice to sit down and have the time to chat with Hunter. After our greetings and re-living of the charmed phosphorescence night, Hunter told us how hard it had been when facing those serious charges. He had lost his home, his landscaping job, his truck ... pretty much everything but his spirit. His community put together a house party and a documentary to raise funds for his legal fees, and his story touched a couple named Sarah and Dan Woodcock. They rallied on Hunter's behalf, reached out to different organizations like Black Lives Matter to get support. Hunter went to church one Sunday,  and his Pastor told him that God told him his charges would be dropped that week. And they were. Then it was time to figure out what he was going to do next. 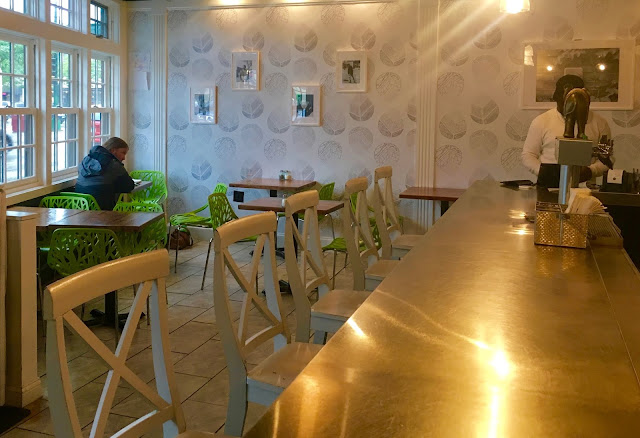 Raised around soul food all of his life, Hunter had the idea for a soul-food food truck, and the Woodcocks wanted in on that if it was a vegan food truck. Hmmm. Hunter was intrigued, but insisted that it would have to have "Seasoning and flavor!" as that was what he felt was missing in any vegan food he had tried. He set out to figure out how to adapt his family's soul food recipes but with plant-based ingredients ("I just did my home thing here"), and soon they were doing pop-ups at (now closed) Breaking Bread Café. The soul food night's pre-sale sold out, there was a line around the block, and they had exactly zero food left at the end of the night. They did a Kickstarter that raised $65,000 in one month. They knew they were on to something.

The food truck dream was skipped over for a brick and mortar restaurant when an investor suggested that she would give them money for a real spot, because it was that good. We know, because Hunter ordered for us, and WOW. I had the cheeseburger and my brother had the soul food platter, and we were both like, WHOA. It was SO good, and immediately made me un-crinkle my nose to the whole idea of plant-based burgers. You miss nothing, and with all the health issues like diabetes and obesity, and all the climate issues like methane gas from beef cows (never mind burning down the Amazon for it), it really is just a better, smarter way to go (though I will always return to Matt's for my Jucy Lucy, sorry). 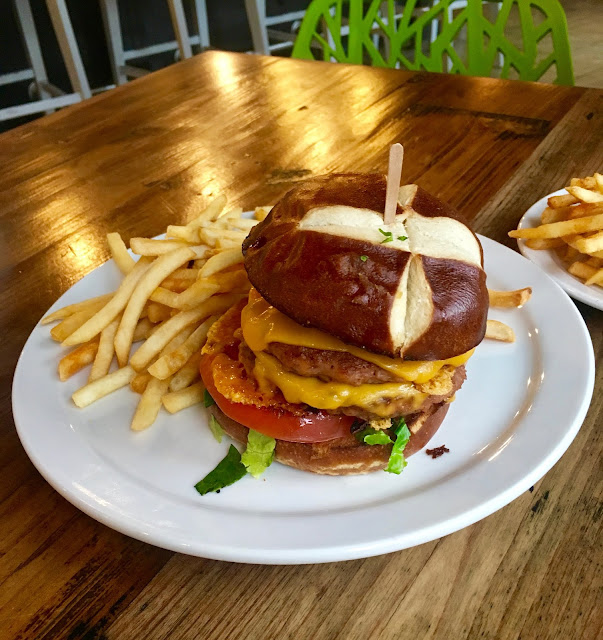 Paul's soul food platter of all the greatest hits like ribs (jackfruit), mac and cheese, greens, yams, corn bread (with amazing maple butter) and Paul cleaned that plate. Hunter told us that he's had guests in from the deep South, telling us, "SOUTHERN people have come in and said it was smackin'!" And they were right. The ribs were a little weird texturally to me if I'm honest, but the flavor was there, and the yams were DELICIOUS. You can also get it all as a "Bowl for your Soul". And you should. "It's comfort food ... but healthy," as Hunter puts it. 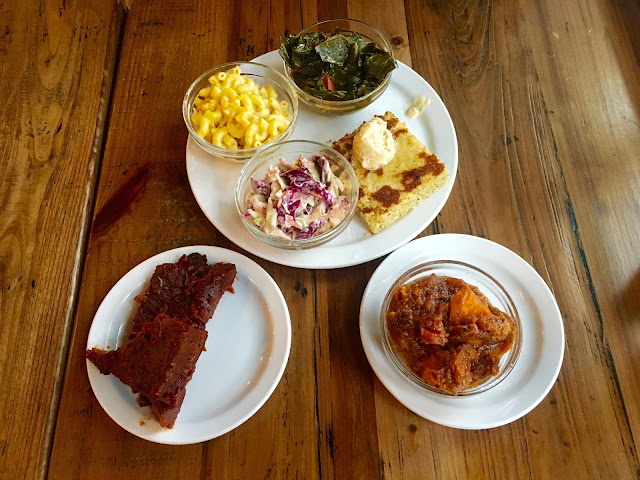 September 30th is the one year anniversary of Trio Plant-Based, and Hunter is now the sole owner after parting ways with the Woodcocks as his partners. His daughter was our waitress, and you could feel the pride Hunter has in the fact that his restaurant gave his daughter her first paycheck. He stressed that Trio is plant-based, not vegan as there are people that that matters to, and not all is strictly vegan ... but it is all delicious.

There is now a Go Fund Me for Trio, as they want to continue to thrive, but also expand (LA NEEDS THIS!!!) and do things like add a little farm to the roof so they can grow their own produce. "There has been a tree of people who have helped me," explained Hunter as both fact and as the look of the place with all of its leaves theme. Local artists' work lines the walls, and the entire operation really is a fine example of community. "I want this to be a lovely community spot that you can come and have a plant-based meal, and leave feeling good about it." We talked about how diabetes affects the Black community (and everyone these days in America) and the changes that need to happen for that, and also how really good plant based food is - "as long as it's seasoned!" 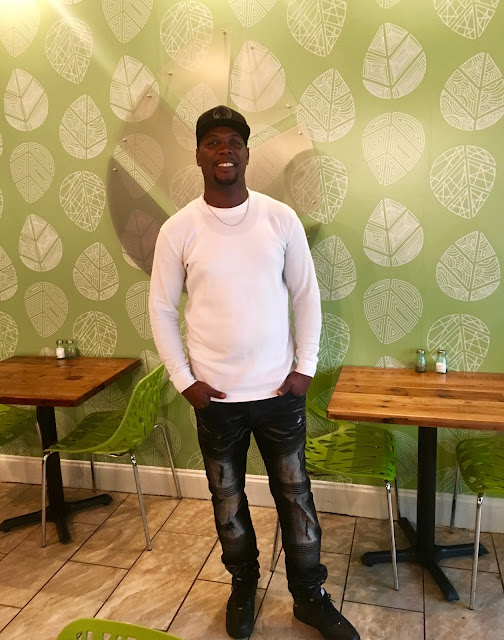 What a powerful example of how faith and hard work can transform a life in such a short amount of time. Hunter went from really having almost nothing to owning a trend-setting, first of its kind restaurant that helps people live healthier in a matter of just a couple of years! Congratulations, my friend! It's exciting, and encouraging, and really speaks to the power of community and humanity. Please visit Trio Plant-Based for yourself and get what we're talking about - and tell Louis CJ sent you! Enjoy!