While I'm in Minneapolis this summer, I want to find as many cool, unique things as I can for the people, just like I do in Venice. I love it when friends say, "Oh, you have to do a story on this!", and tell me about some new awesome thing happening in town. That happened when my friend, Michelle Larson, visited my Mom in the hospital and told me about Urban Forage Winery & Cider House on Lake Street in Minneapolis. She said that it was a wine bar that made all of their own wine and cider from the produce foraged from the city neighborhoods nearby. I had to know more, and made an appointment with Urban Forage owner, Jeff Zeitler, to go check it out. 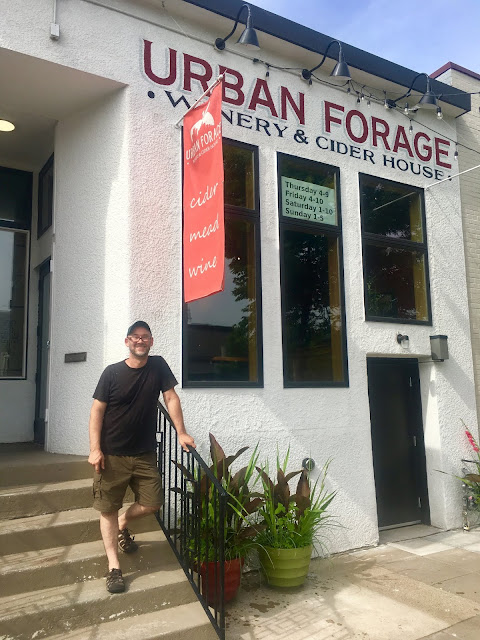 I spent a lovely afternoon last week learning about Urban Forage, and how they make their magic. I met Zeitler at a house a block off of Minnehaha Avenue in the heart of the city that had called him to come and pick all of their sour cherries. The homeowner, Brian Nelson, told me that he was one of the original contributor's to the Urban Forage Kickstarter in its infancy, and donates all of his yard fruit to the cause. 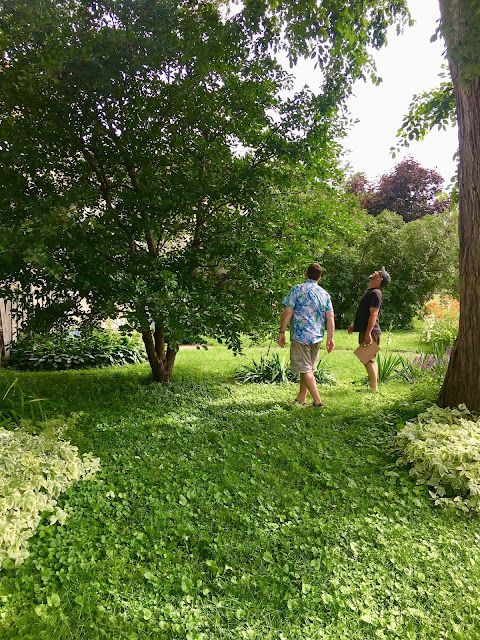 The tree was bursting with bright red cherries, and Zeitler pulled his equipment out of his truck to go get them. A tall ladder, a hook on the end of a pole, and tarps to lay on the ground to catch the bounty are the main tool of the trade, and Zeitler had been making his rounds around the Twin Cities all day in order to harvest all of the fruit that people are now calling him to come and get. "Growers are finding ME now," Zeitler told me, happily, after years of basically knocking on doors to ask people if they were going to use their urban produce. Apples, pears, cherries, rhubarb, black currants, raspberries, blackberries, honey, dandelions, lilacs ... all of them are used to make lovely wines and ciders, or as Zeitler puts it, "I make country wines in the city." Imagine the wines and ciders that could happen in Venice! Pluot! Apricot! Passion fruit! Can someone please get on this? 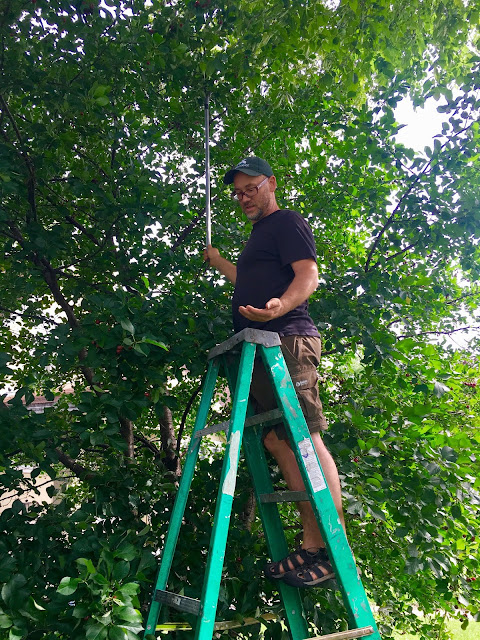 Fruit's life expectancy is not long, however, and Zeitler was a day or two late to get these gorgeous cherries that had fallen victim to a little maggot that loves cherries and they were all rotten. Bummer. You have to act fast with fruit ripeness, and you could tell that both Zeitler and Nelson hated to see them all go to waste (thankfully there were gallons upon gallons already harvested in the truck). 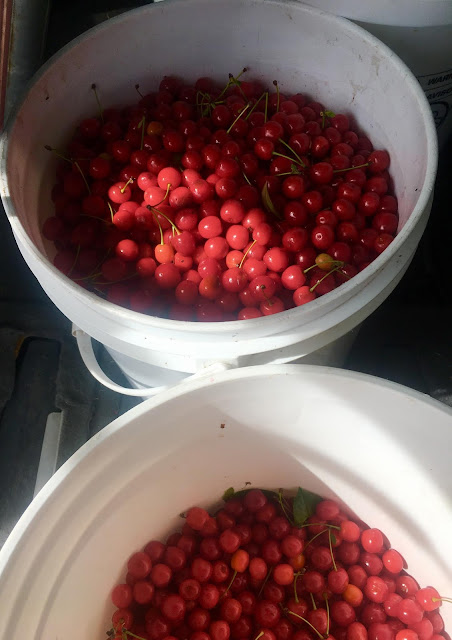 Nelson is also growing black currants from a plant Zeitler gave several neighbors around town to propagate especially to keep up with the demand for the very popular black currant cider, so all was not lost. Nelson is now a member of the "Cider for Life" club, after donating cash to keep them going when they started in 2014, and that now looks like it will be a heck of a bargain. Everything is SO good. But let's back up ...

Zeitler is a Midwest guy, bouncing around between Wisconsin and Minnesota all of his life, and between St. Paul and Minneapolis the last 15 years (yes, you can like both!). He made wine for fun, and even nearly blew up his dorm room making cider while at college. Back then it was more like, "Hey Man, I made booze!" but now that he's been doing it for 27 years ... the man knows his brewing. He explained how he's using fruit from older trees, as the ones he has planted himself won't bear fruit for years. The city offers more shade, people water their yards, pets chase away pests, and "You don't have to worry about deer in the Longfellow neighborhood", so it's almost easier to grow fruit in the city. Which got him thinking ... 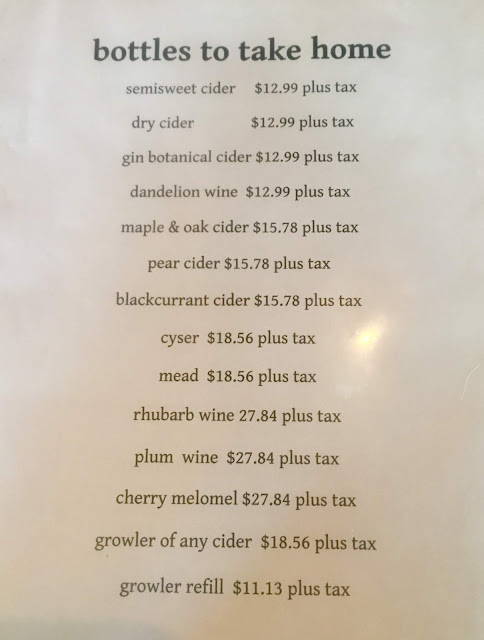 After being laid off from his job as a landscape architect, he had some time to do more thinking. The idea to get the neighborhood connected through agriculture - and wine - just came to him, and soon a business plan was drawn up, and a Kickstarter fund was up and running. He thought of it as a political campaign, only he was running to make a business happen - and it worked. People at the kickoff party loved the idea, and a video was made to raise awareness, and that's really what sold the idea to the local masses.


The Kickstarter goal was soon met, and Urban Forage found its home in a converted old jeweler's building on Lake Street (open Thurdays-Sundays). The Cidery is in the basement (where people come to the side door to pick up their bottles), and the Tap Room is upstairs in a cozy room with a polished wood bar, a recycled door ceiling, and local art on the walls. After bidding farewell to Nelson and his cherries, I met Zeitler back at the Urban Forage space. 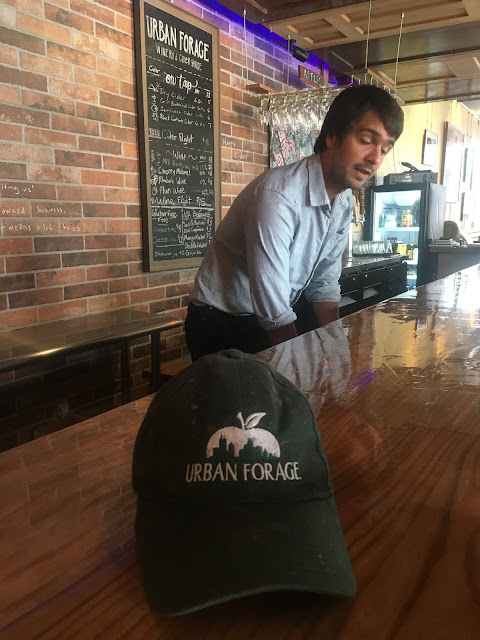 We bellied up to the bar, where the bartender, Nick, set us up with a flight to taste the results of previous foraging. I tried the Dry Cider (super crisp and refreshing - my favorite), the Black Currant Cider (tasty, high in Vitamin C, grows like weeds in Minnesota), the Mead (basically honey wine, very sweet, "warms your core", but not my favorite), the Cherry Melomel (cherry and honey wine - summer itself!), and the Dandelion Wine (weird, but I had to try the "Rural legend" wine). 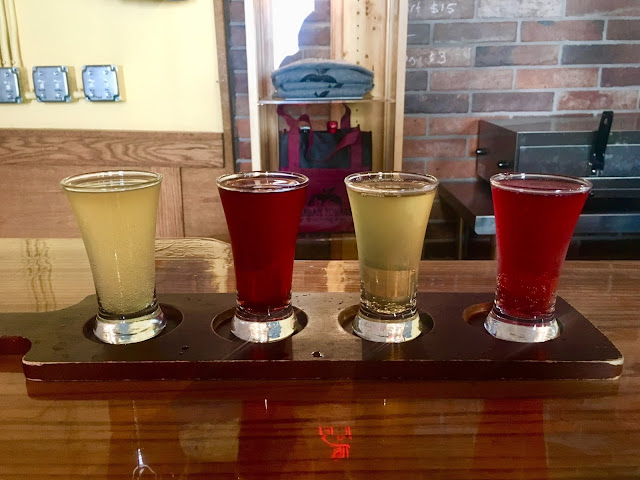 There are no additives, there is zero sugar, it's all gluten free (you can tell your friend that always asks), there is no waste, it's super local, it promotes community, and I couldn't love it more. This is a concept that could and should be copied in every city to promote gardening, zero waste, eating and drinking locally, and building your community in an extra positive way - which is why I'm doing this story about it. Positive, unique, cool things are what I'm interested in, and this certainly fits the bill. Plus, as Zeitler told me, "It's a blast ... you spend a beautiful day with your wife (Gita) and kids, picking fruit and dandelions, then make it into wine and cider ... there's nothing better." 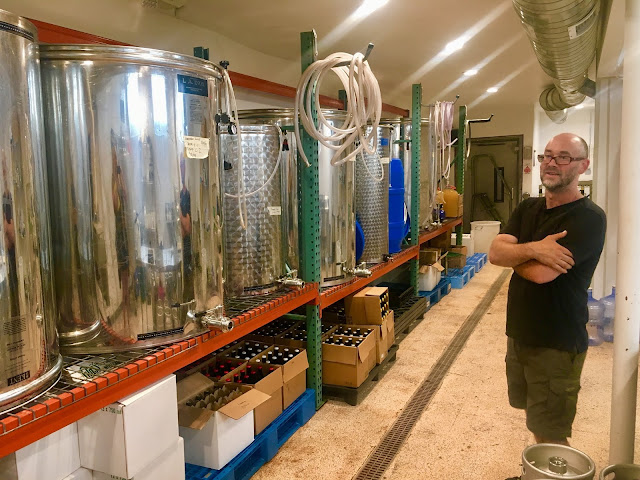 After our tasting, Zeitler brought me downstairs to the Cidery to see how it's done. "Basically, you wash the fruit, it infuses the water, you add yeast, put it into tanks, and it turns into wine," said Zeitler, downplaying how labor intensive it really is. Someone had brought in 20 pounds of rhubarb the day before, so that was being made into rhubarb wine, and an odd-sounding pineapple/banana experiment was fermenting nearby. "I want to do weird, edgy stuff you can't find anywhere else," Zeitler explained, so be on the lookout for a blueberry melomel and an artisan, literal Rootbeer (beer made from roots) coming in the months ahead. 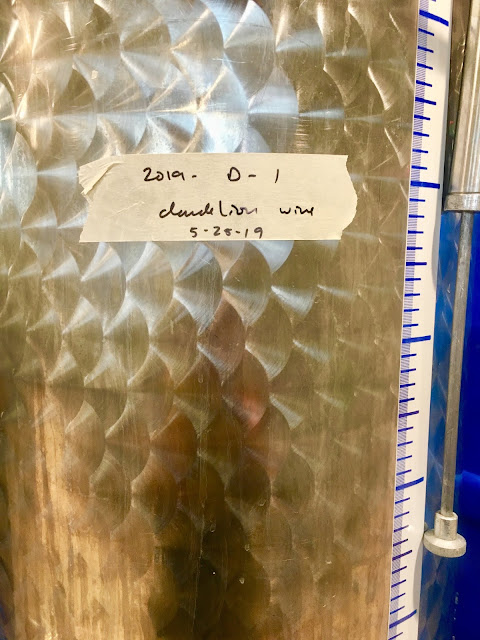 It's all taking off, with people ordering special wines for their weddings, and locals regularly dropping off their yard yield in exchange for bottles of wine and cider. "I'm in it for the long haul," Ziegler told me. "I want to be a 65 year old man serving my cider behind that bar upstairs." As Urban Forage is celebrating it's five year anniversary - and thriving - I'd say that's a goal that Ziegler will  easily meet. 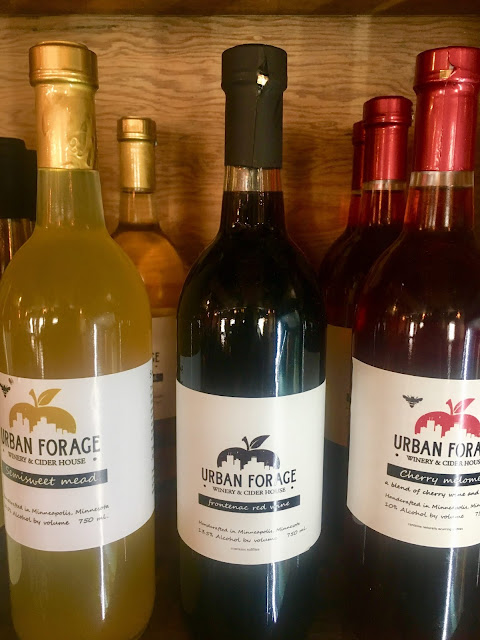 As that bar upstairs got busier on that Friday evening, with customers coming in to buy their retail bottles for home picnics, but also staying put to kick it at the bar. I kept thinking about what a great gift any of the bottles would make for something truly super extra local - from yards mere blocks away! "We make stuff that's REAL, from the backyards of our neighbors. We are really, REALLY Minneapolis," said Zeitler with evident - and deserved - pride. And I left thinking that this was really, REALLY wonderful.